For the first time in over two months both parents are now occasionally leaving the nest at the same time.

A neighbor said they have seen crows harassing the nest in previous years but not this year. Maybe the crows are getting smarter. (To see an interesting new book on the intelligence of crows click here.)

Most likely the eaglets could fend off a crow or two. Even though the eaglets would be less experienced they are now equipped with better talons, beaks and instincts. It seems likely that an osprey could make short work of an eaglet. Still even when the parents are out of sight from a human perspective with their excellent vision they may still be monitoring the nest while they hunt.


The eaglets should be gaining weight at a rate of one pound every 4 to 6 days. Given that a full-sized eagle may average 10 to 12 pounds these eaglets could be as large as their parents sometime in July.


Much like human infants the eaglets spend most of their time sleeping. However when the eaglets are awake they now resemble toddlers more than infants. They are clearly walking about the nest searching for bits of food, they stretch their wings fairly often and they must have a grooming instinct. Whether by instinct or training they have also learned to relieve themselves without spoiling the nest.


Another change this week is that Eva appears to be doing the majority of the hunting while Albert guards the nest. Albert seems to be more comfortable perched 10 to 15 feet above the nest somewhat hidden against the foliage that is the crown of the tree. Eva seems to stay a bit closer to the nest when she is around. Here is an example of meal time in the nest.

On Sunday morning (6/10/12) a bird of prey circled high above the nest coming in from the south. Immediately Eva started calling and raising an alarm. Albert who had been out of sight seemed to appear as if by magic. The adults continued to call out as they moved together to one of the branches 10 to 15 feet above the nest. It would seem logical that this might be the optimal defensive position. Being above the nest they could dive to defend the nest in any direction (e.g. all 360 degrees of the compass). In addition they would get a little gravity boost to help accelerate their defensive dive.


Surprisingly the bird of prey was not a crow or an osprey or even one of the great blue herons that reside on Union Bay. It was a juvenile and yet full-sized bald eagle. It takes about 4 years for an eagle to reach maturity and become ready to mate. During most of this time they are the size of a mature eagle but they lack the white head and white tail and they are considered juveniles. Clearly the parents saw this bird as a threat to their eaglets. 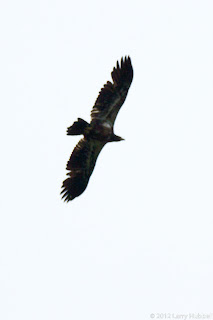 The juvenile eagle circled a few times, inspecting the nest before proceeding in slow, lazy circles to the north over Union Bay. Eva and Albert's quick response averted the threat.


On Monday morning an osprey headed towards the nest but then quickly changed course and flew north towards Union Bay. 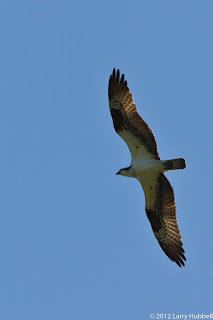 Unfortunately for the parents there is another threat approaching their territory. When the new 520 cuts through Foster Island and the nearby wetlands it will disrupt their food chain. If the impact is too great and if the work is done in spring or summer the eagles could end up with eaglets they are unable to feed. See the heading below entitled, "More Thoughts on 520" if you are interested.


In the mean time this years eaglets appear to be healthy, growing and in need of names. Last week Josephine commented "I propose that we name the babies Beatrice and Eleanor". It seems like it would only be fair if everyone got to propose names for the eaglets and then we all got to vote. Before you decide on your suggestions take one more look at the eaglets.

The older one is considerably larger and more developed than the younger one. Maybe their size or age might influence your choice of names. In any case at the end of this week all names suggested in the comments to this column will be compiled. The follow week we will arrange a vote. Hopefully, the most creative and appropriate names will win!


ps: My daughter just taught me to edit video this weekend. Thank you! Lillian


The question isn't whether 520 should be expanded but rather how can the impact be minimized.

It would be incredible if the children actually saw the salmon return before they graduated from Middle School. These are not expensive ideas mostly they just require planning and forethought. Check the links section to visit other sites related 520. 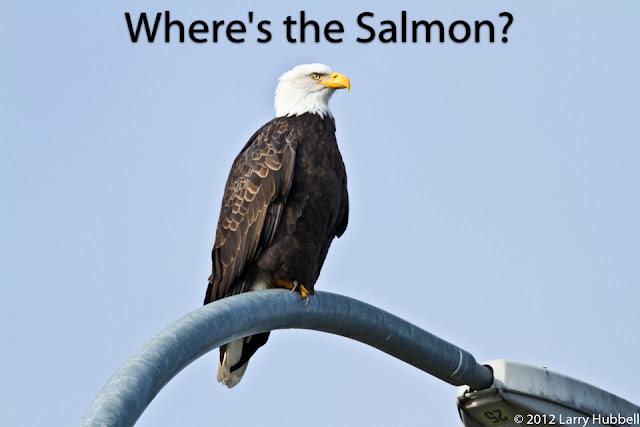 Posted by Larry Hubbell at 8:53 PM