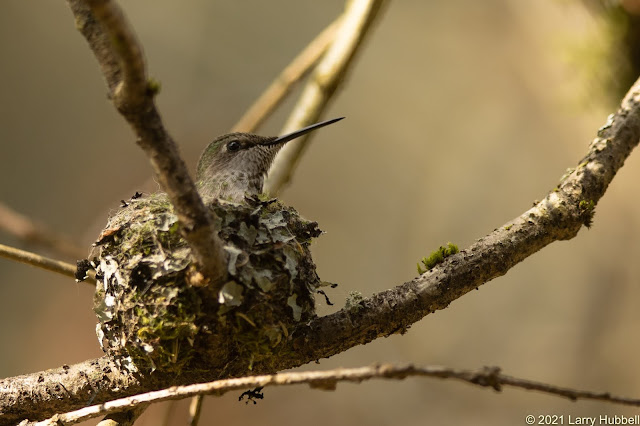 This is a female Anna's Hummingbird, sitting in her nest on March 16th, 2021.
Last week, while watching a different nest, someone mentioned that the Hummingbird nest was about the size of a walnut. My first thought was, "No! It's bigger than that."
Of course, I do most of my bird watching through a telephoto lens. Since it makes the birds, and their nests, appear larger than life my visual perspective is not completely trustworthy.
I decided to research the matter. On average, a walnut (as implied on Reference.com) is roughly 32mm in diameter and approximately 40mm in length. This is as compared to an average Anna's Hummingbird nest size of 38mm in diameter and 25.4mm in height. These nest measurements are the metric conversion from data listed on All About Birds.
The Bottomline:
The walnut analogy turns out to be quite good. If you were to hold the average walnut length-wise in front of an average Anna's nest the walnut would be about 2mm longer than the nest is wide, and about 7mm taller at the mid-point. 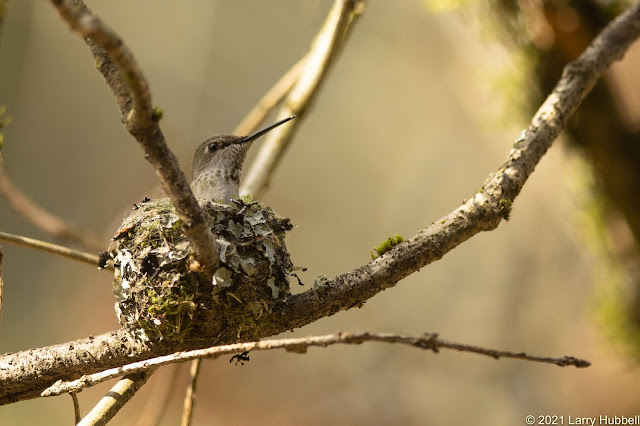 Another interesting measurement is the length of a mature Anna's Hummingbird bill. In this case, it is roughly the same as the depth of the head - from front to back. I found a National Geographic listing that implies the average length of the beak, for an Anna's, is about 18mm, which is around three-quarters of an inch. 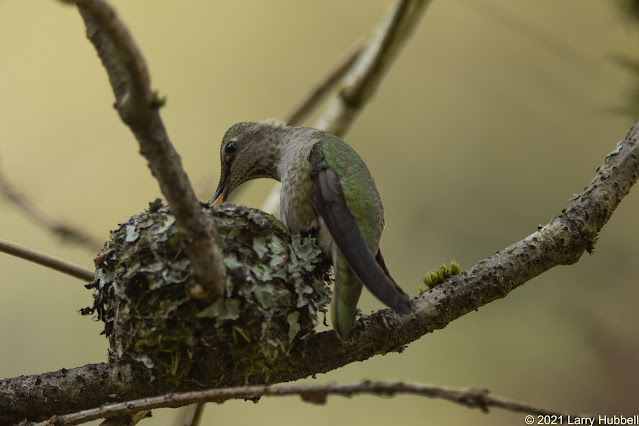 About two weeks later (on March 29th) the small yellow bill of a hatchling was barely visible against the dark background of the mother's bill. Incubation takes about 16 days according to All About Birds. 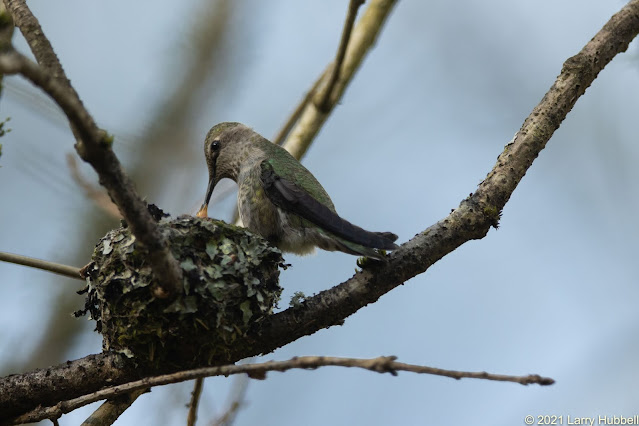 At this early stage, the nestling's bill is almost a wide as it is long. 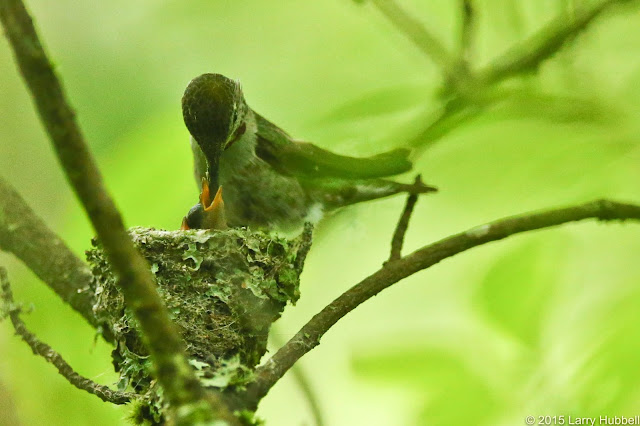 Here is a photo from a few years back that shows a similar state of development, but a bit more clearly. At this early stage, the mother inserts her bill quite deeply inside the young bird. Her head bobs when feeding the young. The process reminds me of the needle on a sewing machine.
Birds of the World says that on the fifth day after hatching the young bird opens its eyes for the first time. 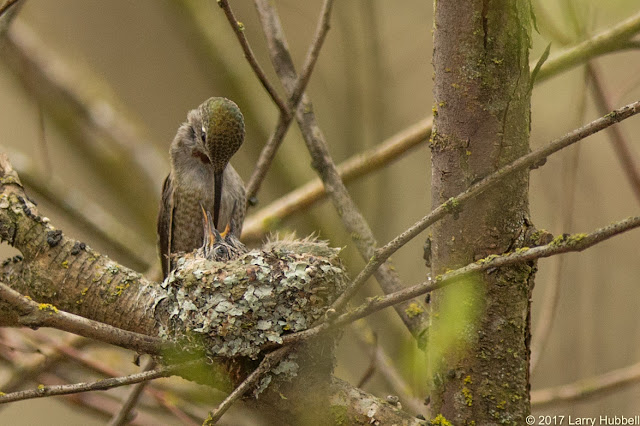 All About Birds says the nestling period, between hatching and fledging, for Anna's Hummingbirds is about 20 days. (As with everything in nature, I am sure it varies.) Here is a different nest midway through the hatchling phase. Their bills of the young are about half as long as their mother's. 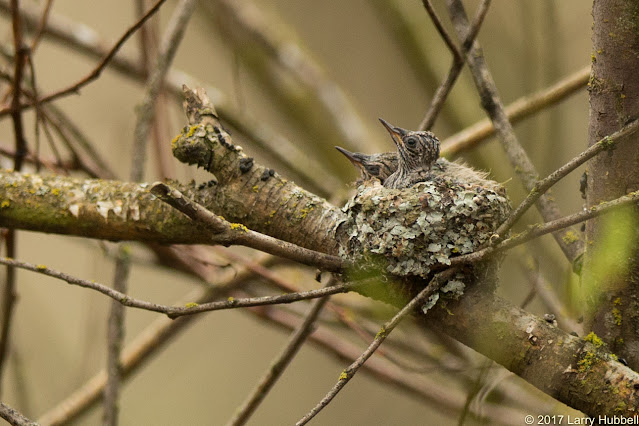 My guess, due to their size, alertness, and the length of their bills, is that these young birds are around 10 to 12 days old. 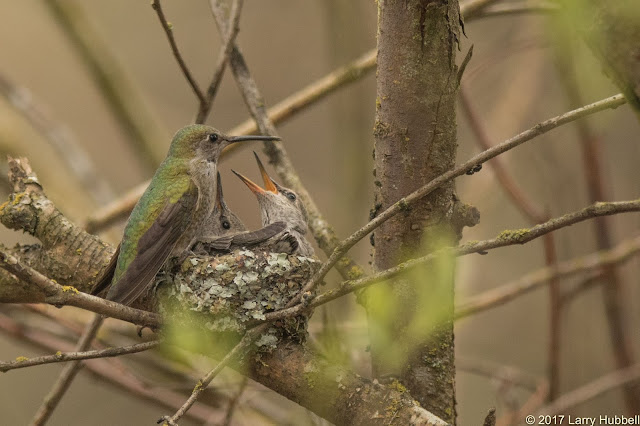 This is the same nest seven days later. The young are getting much closer to fledging. 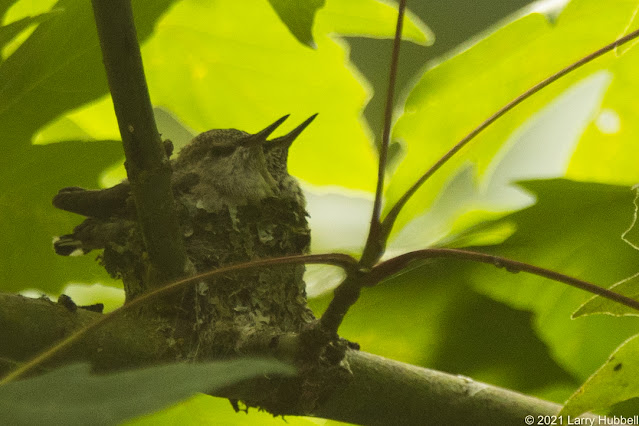 On June 30th, of this year, my friend Sally, showed me another Anna's Hummingbird nest, with two young side by side and waiting, expectantly, for their mother to bring them food. From what I have read, I suspect this is one of the last active Anna's Hummingbird nests in 2021 - but I am very open to surprises. 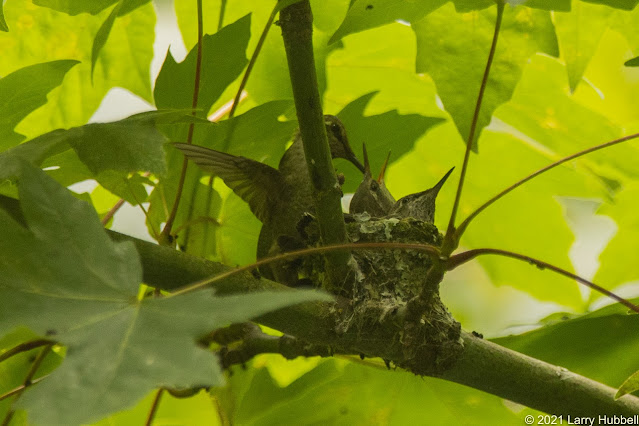 The next day, July 1st, I watched the mother bring food multiple times. Every time she approached the nest the young became very excited. 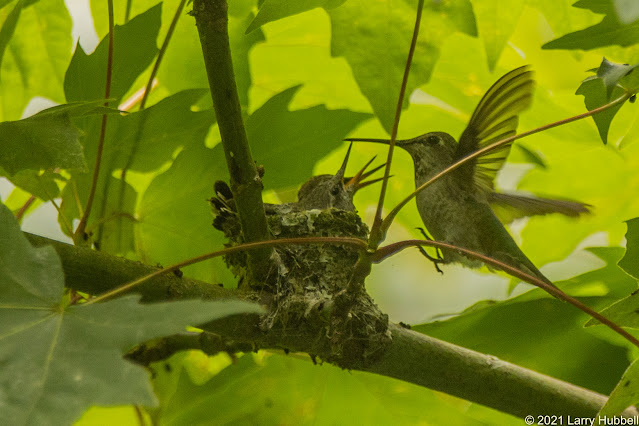 Parents have to watch out for their own eyes as well as those of their offspring. The spatial awareness to safely maneuver the long bill around the active and excited young must require a substantial intellectual capability. This is especially impressive for a small bird - that generally weighs less than a walnut.
If the mother's bill is about three-quarters of an inch in length then the young bird's beaks are approximately one-half an inch long, e.g. ~13mm, at this stage.
The hummingbird's feet are curiously adapted to their lifestyle. They can land, perch, and sidle sideways along a twig. However, since their legs are almost non-existent they appear unable to walk, jump or run. On the other hand, they can pretty much fly circles around almost any creature with legs and most with wings. 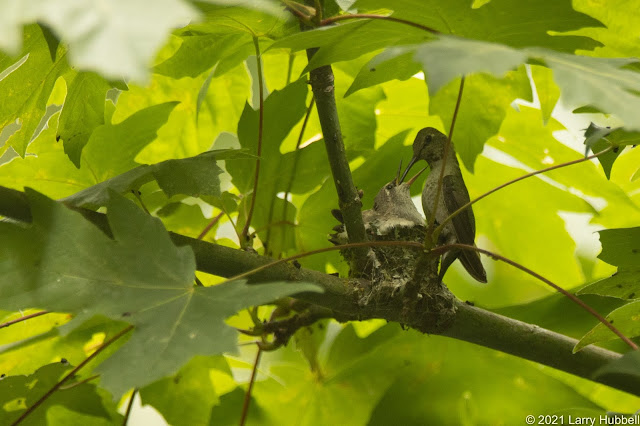 Each day, when I returned I was expecting to find the young had already left the nest. 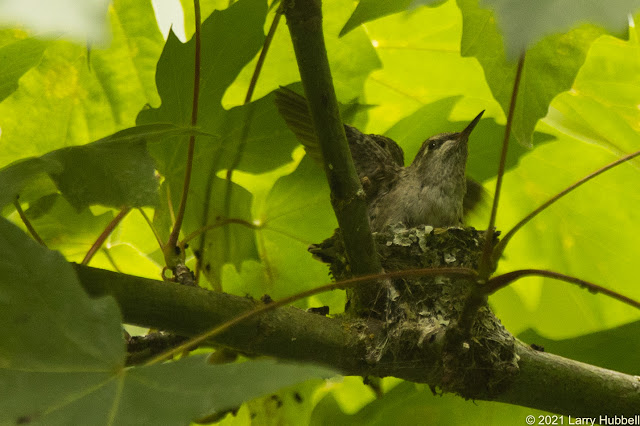 When the bird in front set up and spread its wings it was hard to imagine how its sibling had room to remain in the nest. With all the activity I half expected to see the top of the nest begin to roll down like an old sock falling around one's ankle. 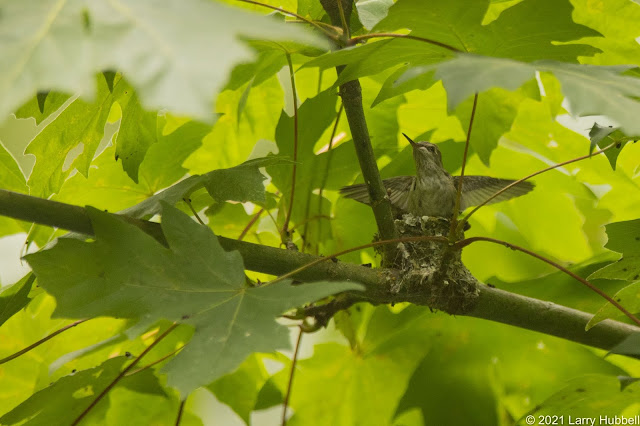 With its wings spread, it was obvious, this bird would not be in the nest for long 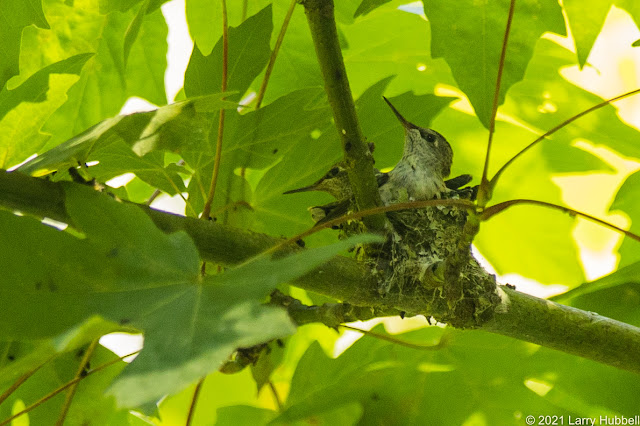 To total my surprise, on July 3rd both of the young were still present in the nest. 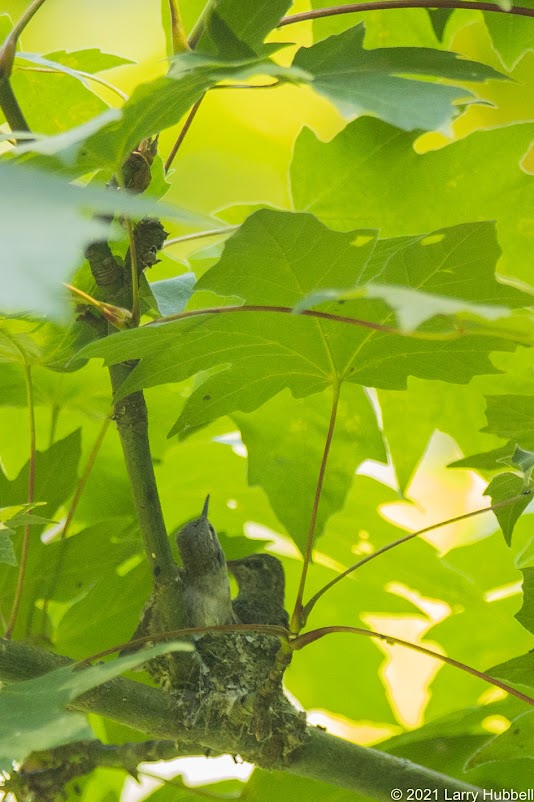 All though, they were twisting and turning while taking a serious interest in anything and everything outside of the nest. 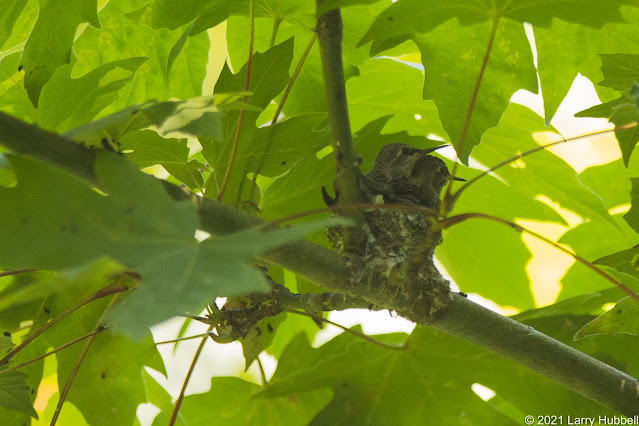 This growing external awareness seems to be consistent with all young birds, as they approach fledging. I have noticed it across the size spectrum, from the Anna's to Downy Woodpeckers, Northern Flickers, Pileated Woodpeckers, and all the way to Bald Eagles. 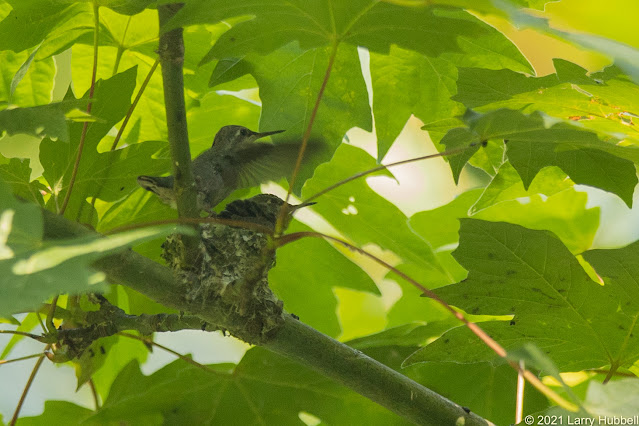 When the young bird lifted clear of the nest full-fledged flight was obviously imminent. 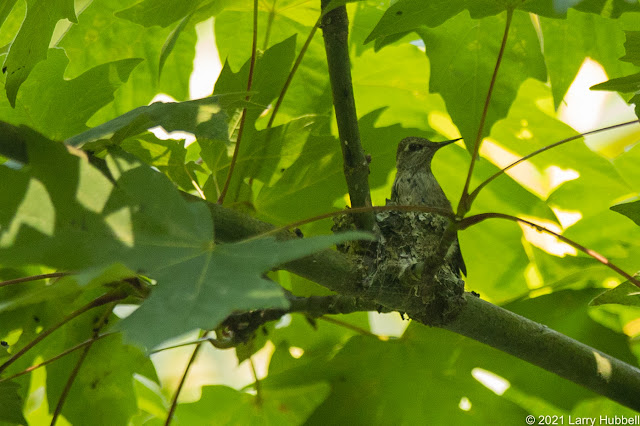 When I returned on July Fourth, there was only one of the young near the nest. Independence Day seemed like a fitting time for the older sibling to have learned to fly. 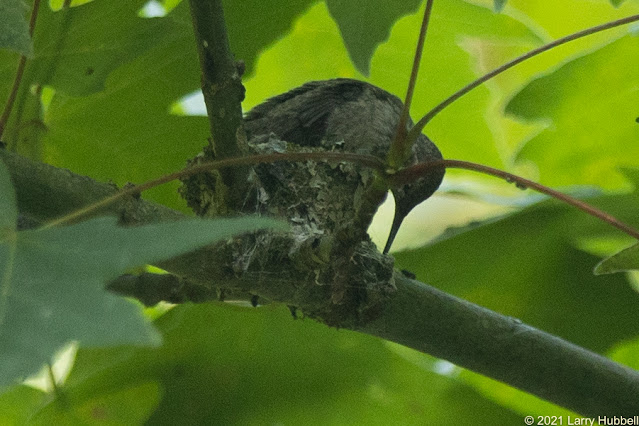 By July 5th the second sibling was showing a growing interest in the world outside the nest. The next day it too was gone from the nest.
I have watched empty Hummingbird nests in the past. Without the mother's constant attention they begin to slowly decompose. The process is greatly accelerated the first time it rains. The nests almost seem to melt.
The challenge for all of us is trying to identify the young hummers as they visit our feeders, flowers, and water features. One hint to their immaturity is a bill that is smaller than the depth of their head. Another obvious hint would be to see them being fed by a parent. (Although I expect the free gravy train to end rather quickly.) It also seems like young birds are slightly less shy and more likely to let you take a bit of a closer look.
Have a great day on Union Bay...where nature lives in the city and Black Birders are welcome!
Sincerely,Larry
Going Native:
Each of us, who breathe the air and drink the local water, needs to watch and protect our local environment. Native plants and trees encourage the largest diversity of lifeforms because of their long intertwined history with our local environment and native creatures. I have been told that even the microbes in the soil are native to each local landscape. I hope we can inspire ourselves, our neighbors, and local businesses to respect native flora and to support native wildlife at every opportunity. I have learned that our most logical approach to native trees and plants (in order of priority) should be to: 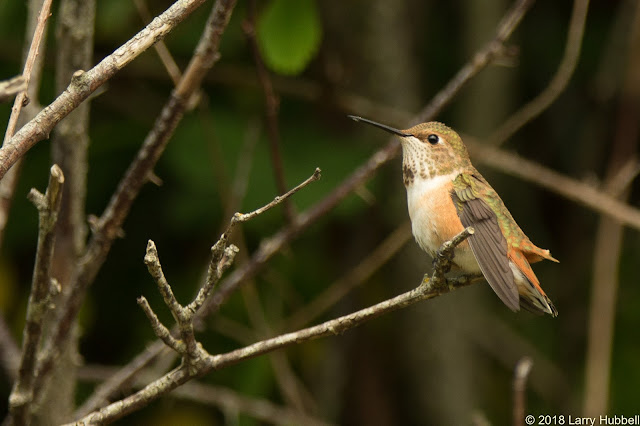 What species of Hummingbird is this? Is it native to Union Bay?


Scroll down for the answer.
***************
Rufous Hummingbird: Yes! Rufous Hummingbirds are the native Hummingbird in our area. In fact, it is the more common Anna's Hummingbirds who have only been here for less than a century. Click Here to see a delightful Rufous Hummingbird post by three of my favorite people - Craig & Joy Johnson with assistance from Dan Pedersen!
By the way, the photo above is of a female. The males look similar but with far more of the orange, or rufous, coloring.
*****************
The Email Challenge:
Over the years, I have had many readers tell me that Google is no longer sending them email announcements - regarding my posts. Google never responded to my requests for help with this issue. Now, in 2021, the service is being discontinued.
In response, I have set up my own email list. With each post, I will manually send out an announcement. If you would like to be added to my personal email list please send me an email requesting to be added. Something like:
Larry, I want to see more of nature. Please add me to your personal email list.
Thank you for your patience and interest! 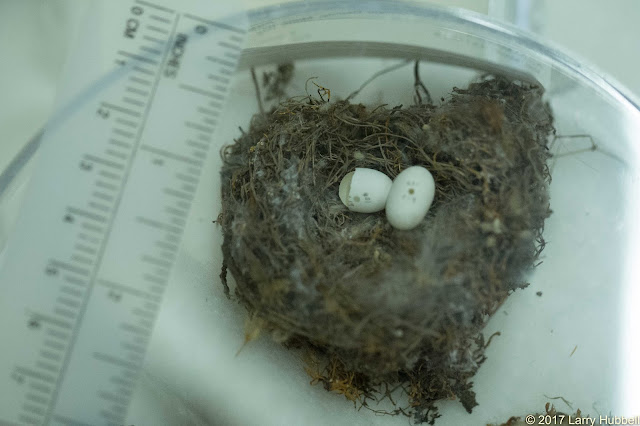 Thanks to Dennis Paulson and the Slater museum, this is what Anna's Hummingbird eggs look like in the nest. (Many people take vitamins that are larger.)

Posted by Larry Hubbell at 2:49 PM