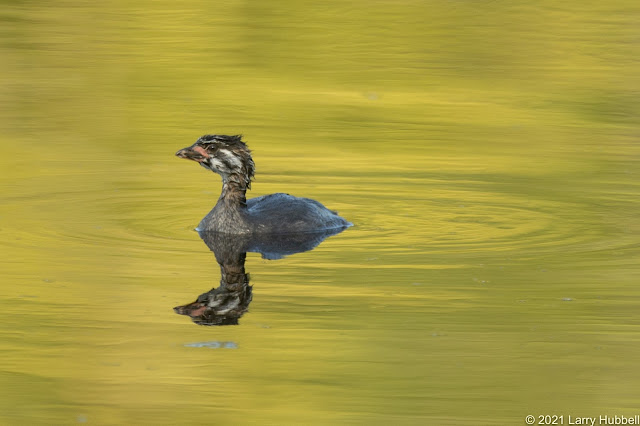 Yesterday, this immature Pied-billed Grebe sat in the sunshine waiting for a parent to bring it food. The reflection of the neighboring vegetation gave the water a golden appearance. 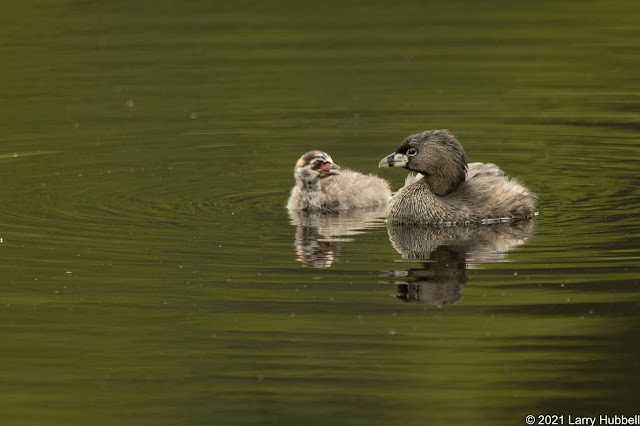 Earlier in the week, I experienced a somewhat similar situation.
From a distance, I heard the incessant high-pitched cries of an immature grebe begging for food. The cries were so constant I wasn't sure whether I was hearing multiple young or just one. When I reached the water's edge, I initially saw only one. In a few moments, the adult appeared. I wondered if it was the mother or the father. 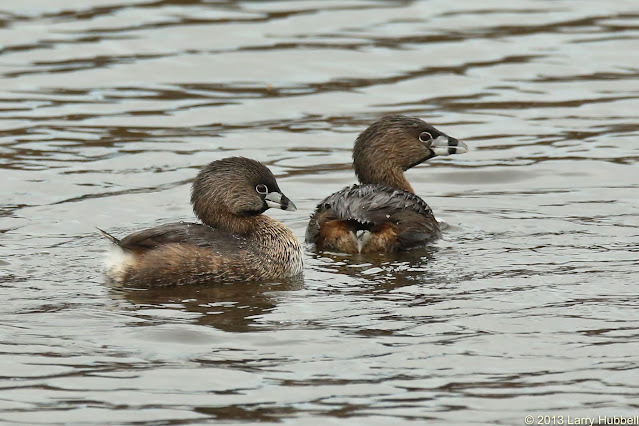 Martin Muller (Grebe Expert and Co-Founder of the Urban Raptor Conservancy) taught me that the males have the taller, heavier bills. Females carry less impressive hardware, which seems to function just fine. I am guessing the adult in the previous photo is a male, like the bird on the right in this photo.
It looks to me that if the top of the bill is approximately level with the bottom of the eye then the bird is most likely a female.
You may also want to note how their tails are almost nonexistent. I suspect having tails might slow them down, as you will see in later examples. 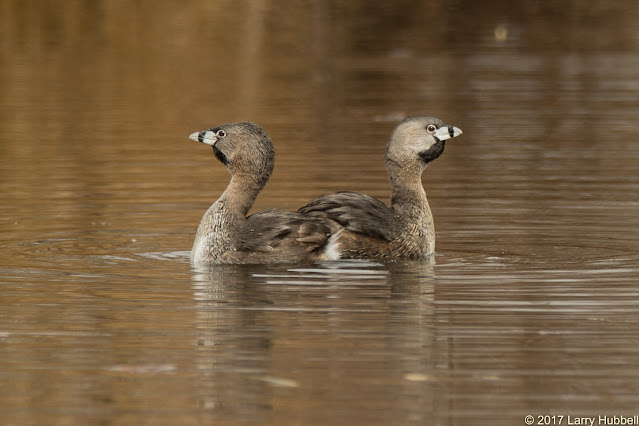 The males need to be impressive during the breeding season to defend their territories.
Although during the mating season, both the males and the females get the black bibs and develop the two-toned bills - which inspired the term "pied-billed" in their name. 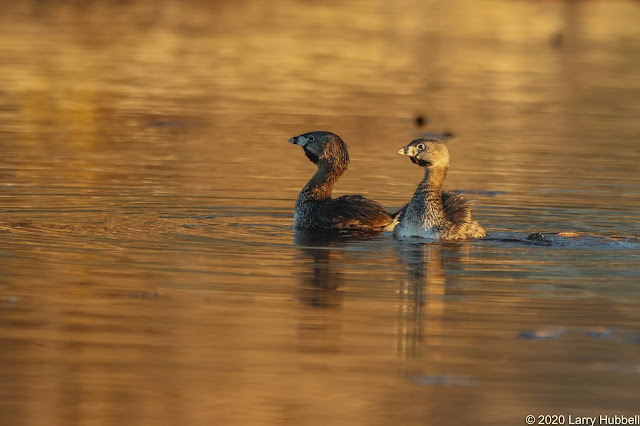 The males spend a fair amount of time negotiating territorial boundaries with the guy next door, and they may have multiple neighbors. 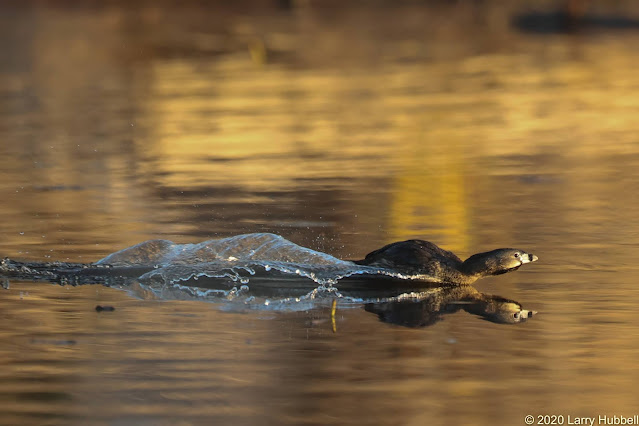 Sometimes they appear to challenge each other by charging across the surface of the water. Their legs are placed at the "tail-end" of their bodies. It almost makes me wonder if their bodies could hydroplane in front of their paddling feet. 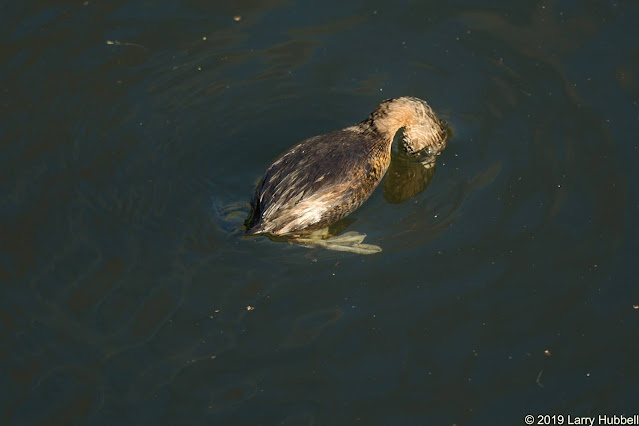 This diving example shows the placement of the legs. By the way, they have lobed-toes instead of webbed feet. When they see a fish they want to catch, they push against their feet and dive forward. 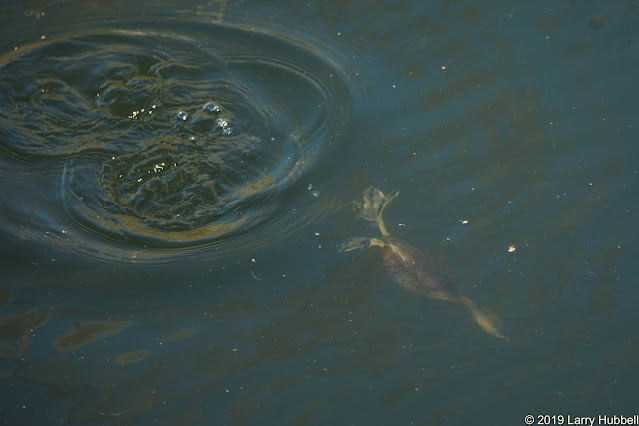 Underwater, their lobed toes provide propulsion. It is easy to see how a significant tail would simply get in the way.
I also wonder how much they utilize their wings underwater. This example seems to indicate they keep them tucked in, apparently to facilitate a very streamlined body. 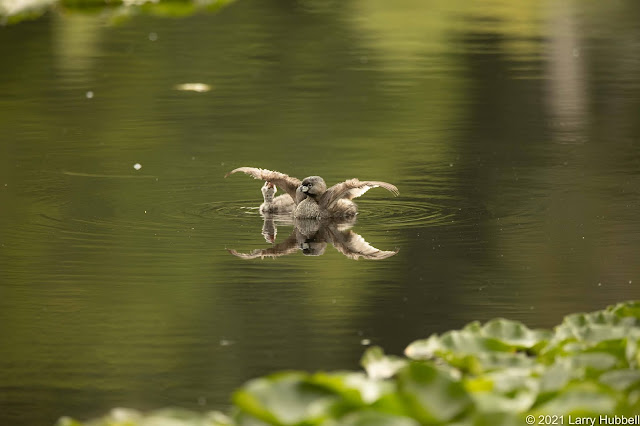 Returning to the birds I saw this week, their wings seem rather small for the size of their bodies. I seldom see them in the air. Wing-wise, one might almost imagine them as being just one evolutionary step away from penguins. 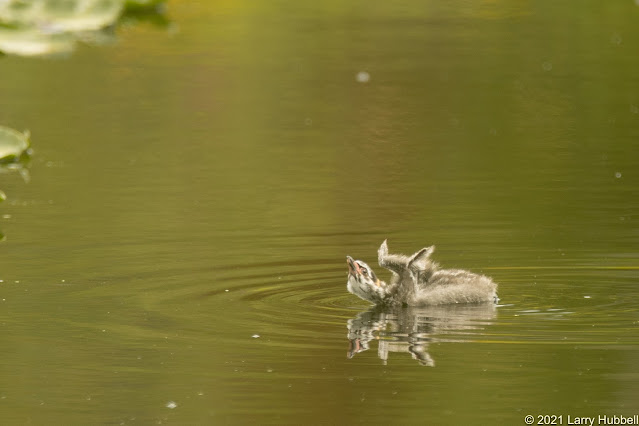 I realize it may not be fair to compare the young bird's undeveloped wings in this line of thought. However, if a mutation in their DNA were to turn off the further development of wings, they would certainly seem more penguin-like.
On the other hand, it would still be a major change for them. Click Here to see the eBird dynamic abundance map which implies they actually travel considerable distances during migration. 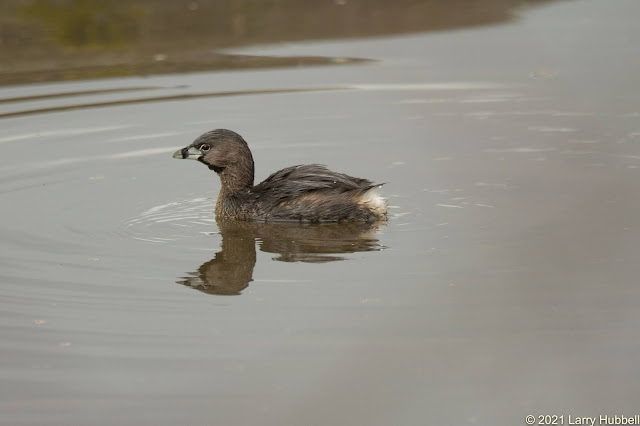 The earlier photo of the diving Pied-billed Grebe showed only one aspect of their diving capabilities. They also have another far more subtle approach. 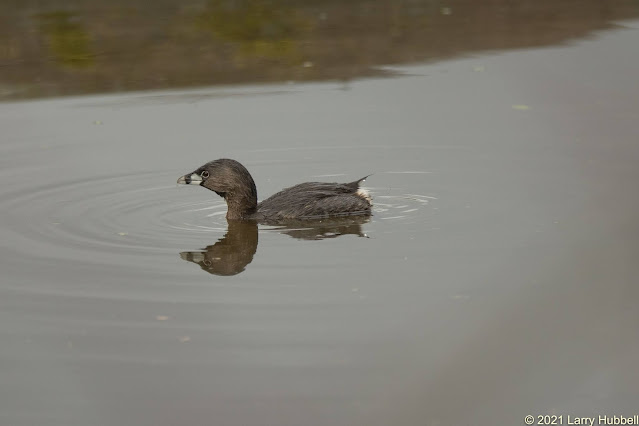 They can change their buoyancy at will. I suspect this has to do with excluding air or water from under their feathers. 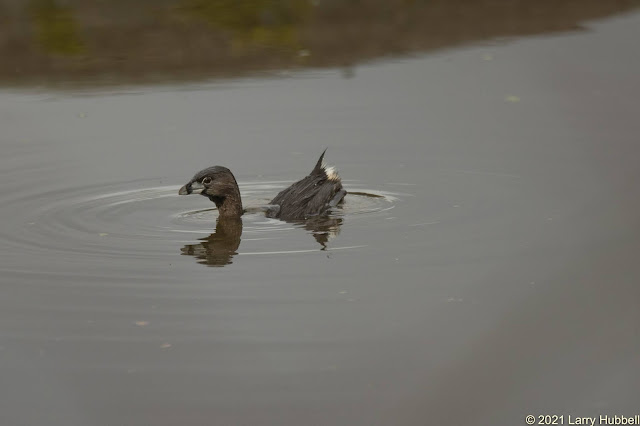 Given that we do not see bubbles I am guessing the bird became heavier, relative to the surrounding water, by squeezing water out from between its feathers. 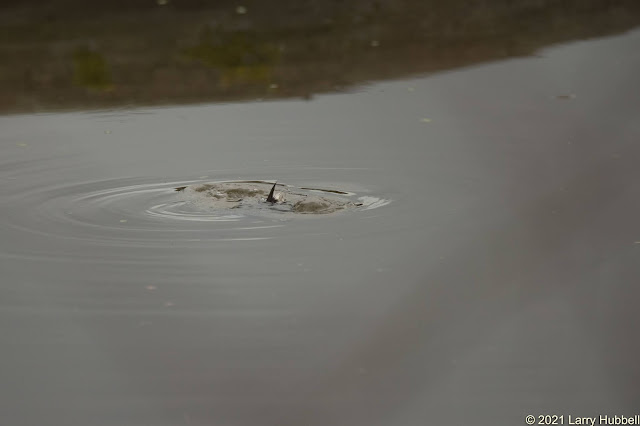 Similar to a submarine, Pied-billed Grebes can simply sink below the surface whenever they choose. 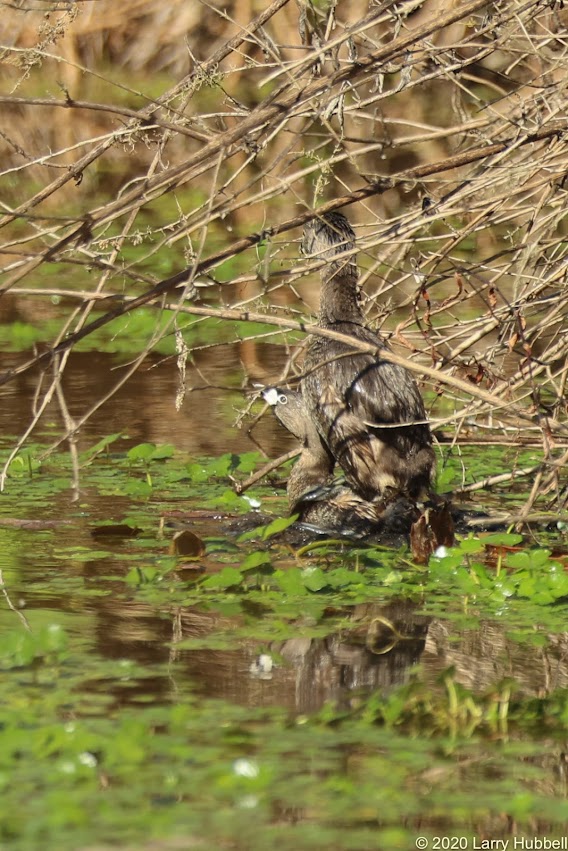 While the lack of a tail probably makes mating easier, the leg placement must require an exceptional effort to stay upright. 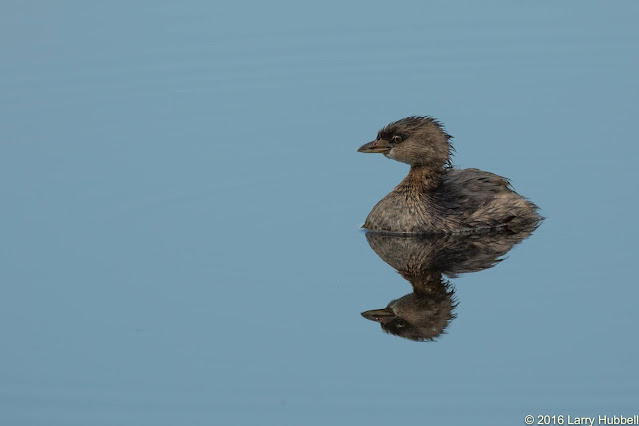 When breeding season passes, the special markings disappear. For the most part, Pied-billed Grebes are a fairly nondescript brown. Even during the breeding season, their exceptional coloring is pretty much all around the facial area. 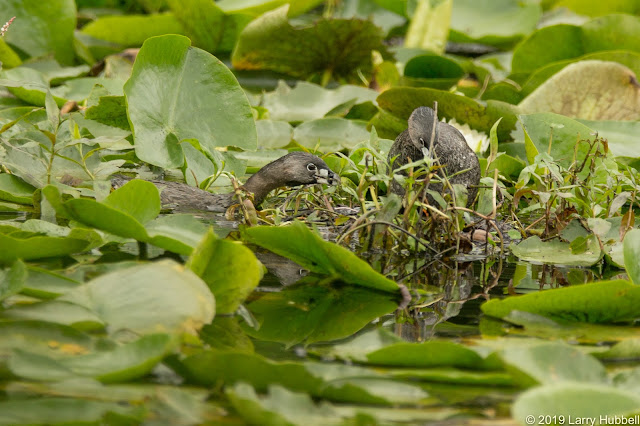 At the beginning of the breeding season, one of their first priorities is building a nest. 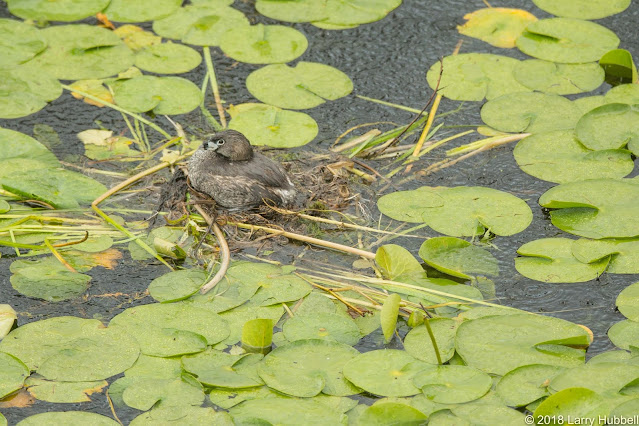 Given that they are diving birds, they do not build their nests in trees or on land, where they would find it awkward and slow to fly or walk. They build floating nests instead. 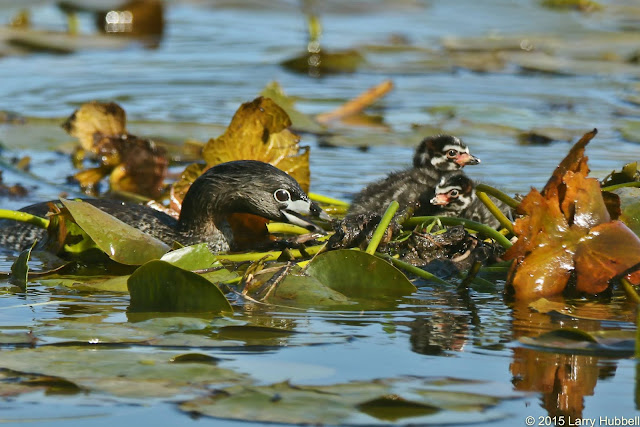 As odd as this may seem, it is apparently the safest option for incubating their eggs. Whenever they both leave the nest they typically cover the eggs with dead leaves or mud. Once the eggs hatch the young usually leave the nest rather quickly. 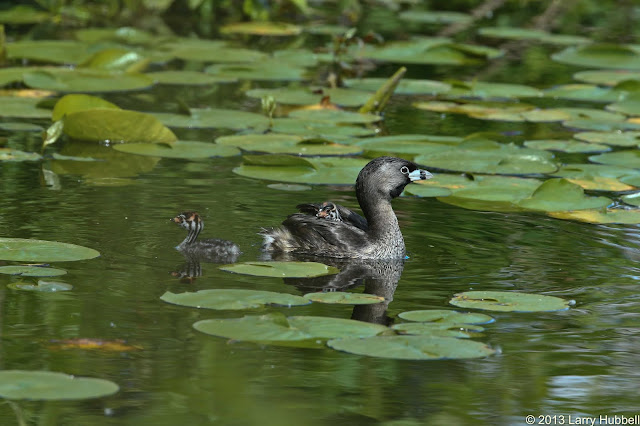 For the first week, the mother will often carry them on her back.
The most popular post on this blog showed examples of this behavior. It was called The Mother Ship. Click the highlighted link to see more. 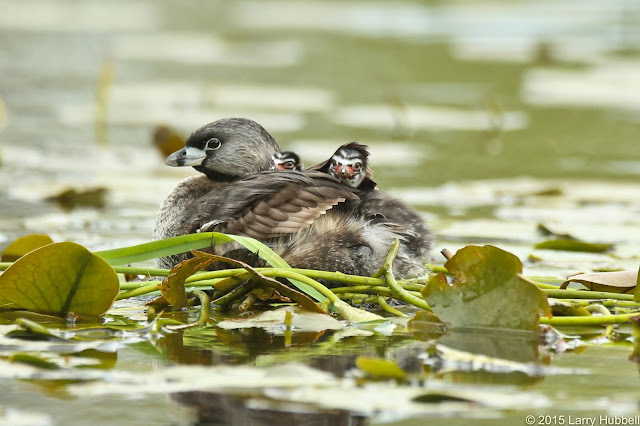 This week I realized that the most important markings on a young grebe are the exceptional colors around the face. 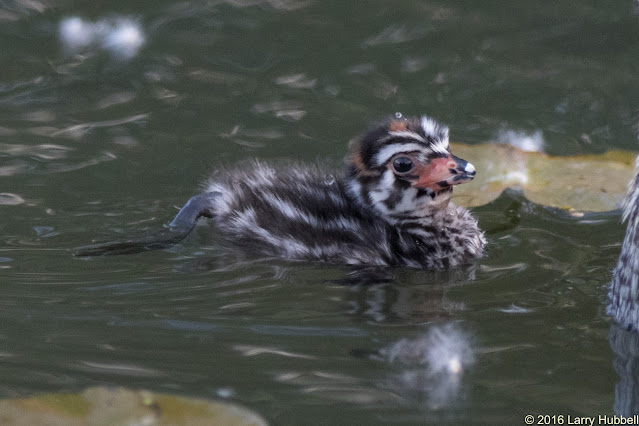 Just like humans and many other creatures, the first thing a grebe sees when another lifeform approaches is its eyes and face. We, and probably they, are much better at remembering faces than any other aspect of another's body. Note: This very young bird has youthful markings on its back as well as on its face.
With diving ducks, who spend a major amount of time moving among lily pads and other surface vegetation, the head and face may often be the only portion of their body that is visible. I suspect adult grebes need quick facial feedback to inform them whenever an approaching bird is a youth. They may not need to be quite as aggressive when immature birds encroach on their territory - especially since the young may not even be capable of catching food on their own. I am guessing that due to their youthful advertisements, the young get a little extra slack during these early weeks of life. 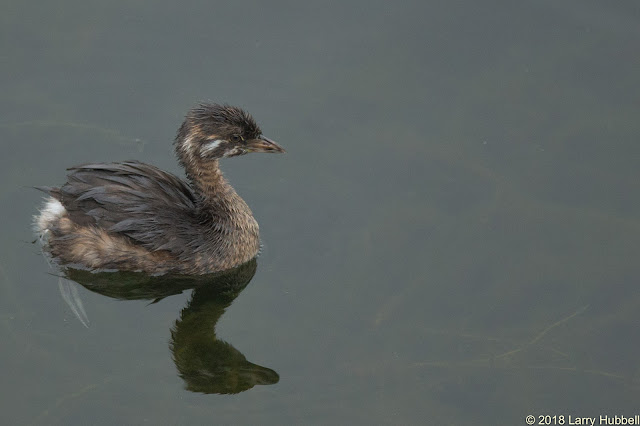 This photo seems to reinforce the idea. We can see that the facial markings of youth are some of the last immature indicators left on this developing bird. If the last markings were on the back they would be far less obvious and useful. 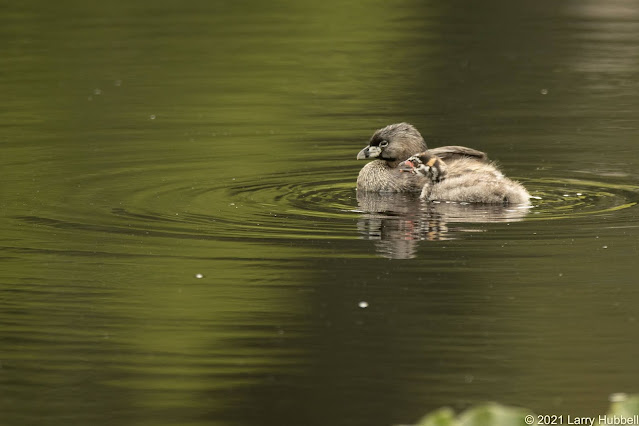 The photos from this week show the same sequence of development. 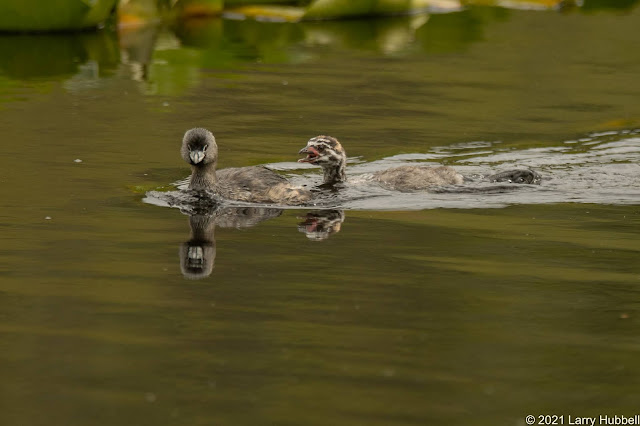 When an older, more developed, young bird returned to beg for food, we can see the youthful indicators are only on its head and neck, as well.
Have a great day on Union Bay...where nature lives in the city and Black Birders are welcome!
Larry
ps: Thank you to Gary Luhm, who inspired me to keep watching the Pied-billed Grebes this year.
Going Native:
Each of us, who breathe the air and drink the local water, needs to watch and protect our local environment. Native plants and trees encourage the largest diversity of lifeforms because of their long intertwined history with our local environment and native creatures. I have been told that even the microbes in the soil are native to each local landscape. I hope we can inspire ourselves, our neighbors, and local businesses to respect native flora and to support native wildlife at every opportunity. I have learned that our most logical approach to native trees and plants (in order of priority) should be to: 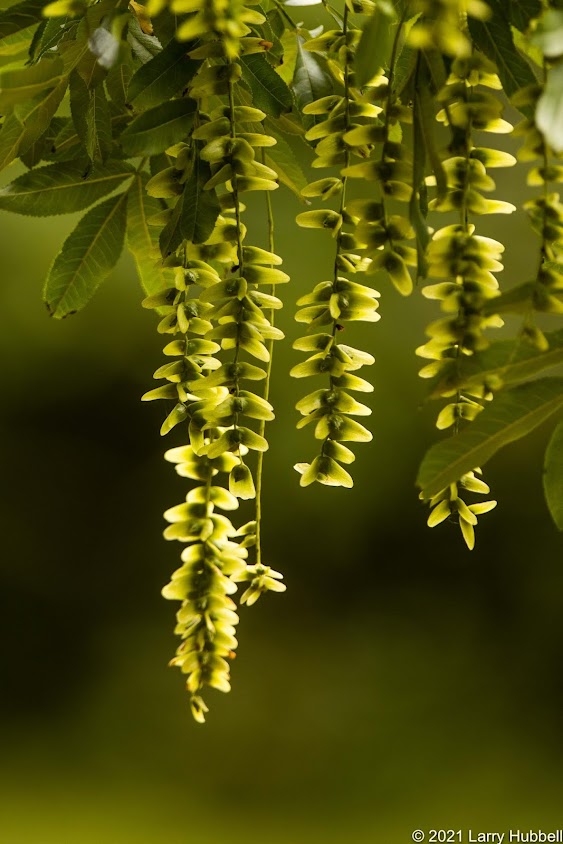 What species of tree is this? Is it native to Union Bay?


Scroll down for the answer.
***************
Chinese Wingnut: No. This is a non-native specimen found on the west side of Duck Bay in the Arboretum Collection. (Funny, I always thought wingnuts were what you found holding on an automotive air filter during the 20th century.)
*****************
The Email Challenge:
Over the years, I have had many readers tell me that Google is no longer sending them email announcements - regarding my posts. Google never responded to my requests for help with this issue. Now, in 2021, the service is being discontinued.
In response, I have set up my own email list. With each post, I will manually send out an announcement. If you would like to be added to my personal email list please send me an email requesting to be added. Something like:
Larry, I want to see more of nature. Please add me to your personal email list.
Thank you for your patience and interest! 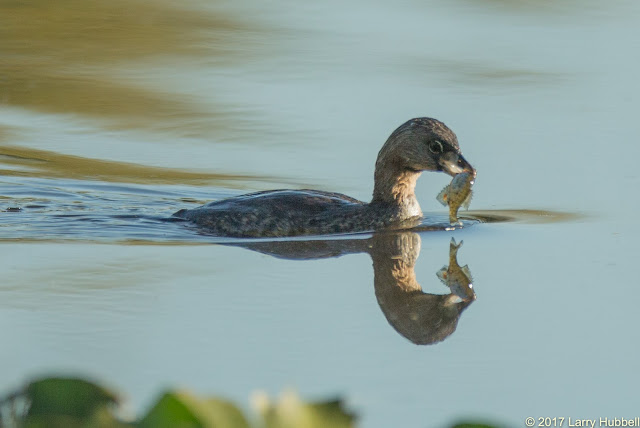 An adult catches a fish... 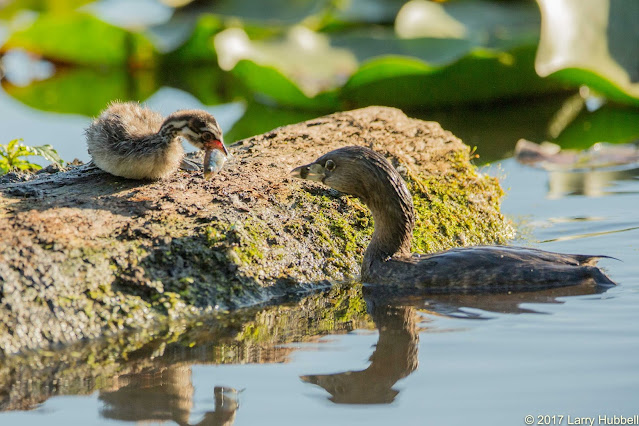 ...and brings it to their offspring. 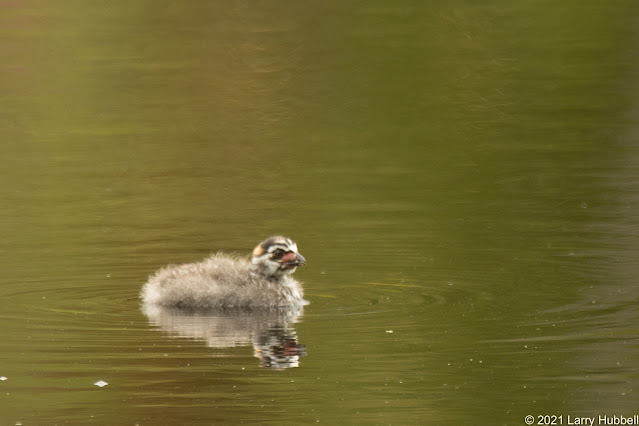 Posted by Larry Hubbell at 1:29 PM