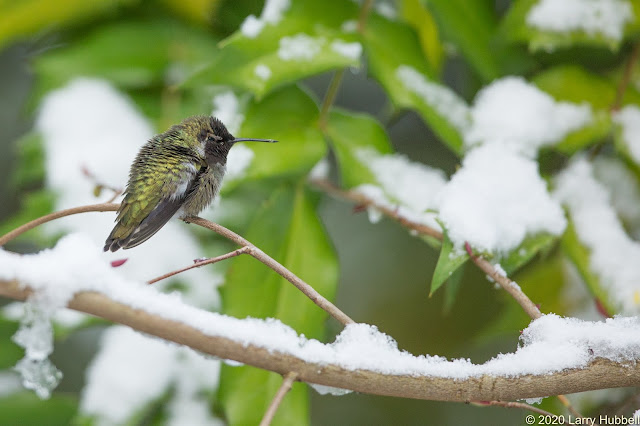 On Monday and Tuesday, our Seattle weather was cold.

During warm weather, we have two species of hummingbirds in our area. However, only one, the Anna's Hummingbird, is here during the winter. (Our native Rufous Hummingbird works hard to avoid the snow. They can migrate thousands of miles, from as far as Alaska to Mexico.) 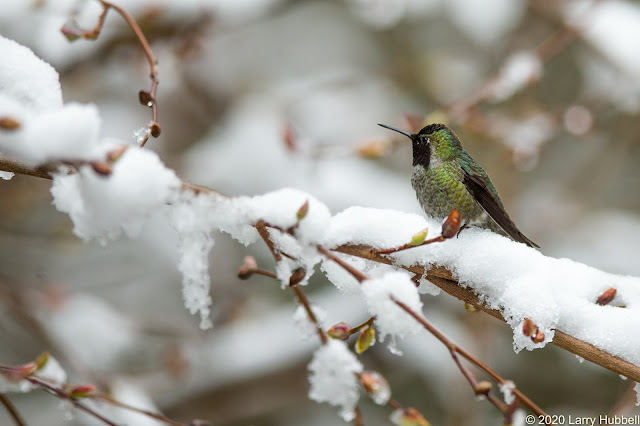 It seems rather ironic that the migrating behavior associated with the term, Snow Bird, does not apply to the species which ends up sitting in the snow.

Unlike Snow Geese, Snow Buntings or Snowy Owls, which have developed a significant white coloring associated with their extensive snow experience, the Anna's Hummingbirds generally seem to avoid the snow and have minimal use for white feathering. 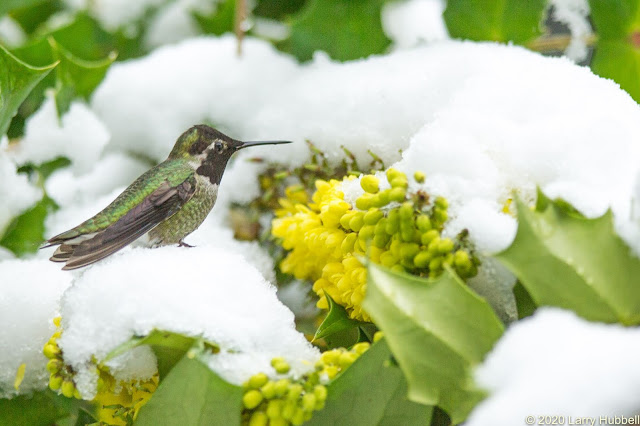 Their primarily green coloring seems more fitting as camouflage for a jungle bird. According to Birds of North America (BNA - citation below), the first Anna's Hummingbirds arrived in Washington state in 1964. Historically, they were primarily California birds which migrated relatively short distances e.g. up into nearby mountains during the summers. 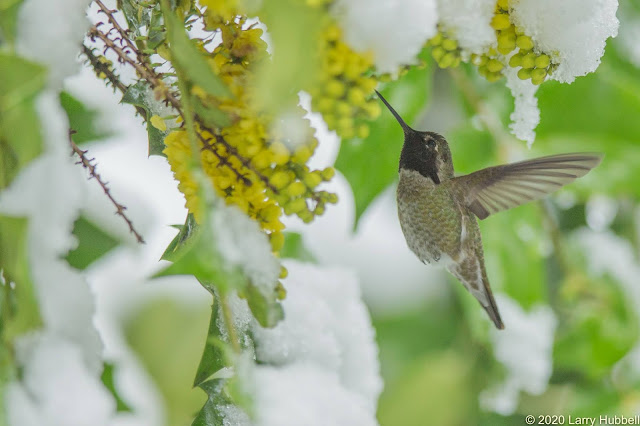 The expansion of exotic winter-blooming plants (like this unique hybrid of Asian Mahonia in the Arboretum's Winter Garden) and hummingbird feeders can be partially credited with attracting Anna's Hummingbirds to the Pacific Northwest. However, population growth in California may have been the underlying driving factor.

BNA says, about the California population, 'The combination of extensive nonnative plantings, particularly eucalyptus (Eucalyptus) and tree tobacco (Nicotiana glauca), plus widespread use of feeders, has undoubtedly played a major role in expanding populations of this hummingbird.'

Curiously, the current range maps for Anna's Hummingbirds are not perfectly aligned.

Birdweb's map for Washington state implies altitudinal and maybe some longitudinal migration. It shows breeding in the Puget Trough, primarily in heavily populated areas, and the birds moving up into the Cascades or out into less populated areas of Puget Sound during the non-breeding season.

Uncertainty is evident in comments from both sites.

Birdweb says, 'In Washington, Anna's Hummingbird appears throughout the year. It is unclear whether this is due to migration or whether the birds we see in January are the same as those we see in June.'

All About Birds says, 'Unlike most North American hummingbirds, Anna's Hummingbirds either don't migrate or else migrate a very short distance to better feeding grounds.'

Could it be that, with their recent territorial expansion, the species has not yet settled on a single optimal pattern of migration? Maybe they will and maybe they won't. Life is dynamic, spell-binding and worthy of observation and study.

In any case, the Anna's Hummingbirds appear to be quite a competitive challenge for the Rufous Hummingbirds. The Anna's arrive at most breeding territories first and they spend less energy getting there. It is clearly to their advantage, as long as they can survive the winters. 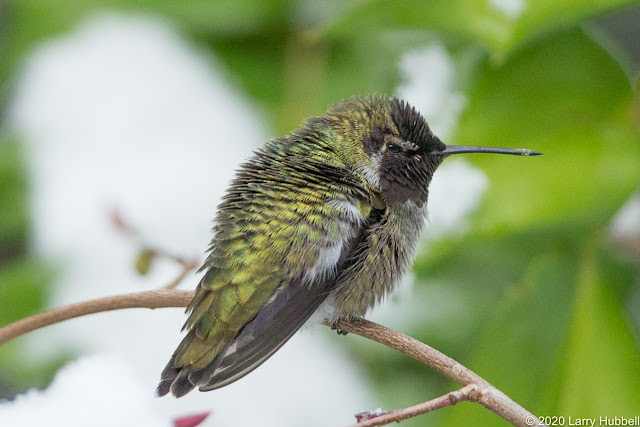 Surprisingly, for a bird originating in California, Anna's Hummingbirds can enter a state of torpor, during especially cold weather. Looking closely at the bird from our first photo we can also see some behavioral adaptions to the cold. For example, the fluffed feathers and the eyes partially closed, both of which may help to retain heat.

During the snowstorm, our outdoor temperature was in the same range, however, I did not see any hummingbirds which appeared to be in torpor. Most likely this was because there was an adequate supply of food, which provided sufficient energy to combat the cold. I did notice one other curious potentially, cold-related behavior, e.g. the whitish accumulation of nectar near the end of the bird's bill. 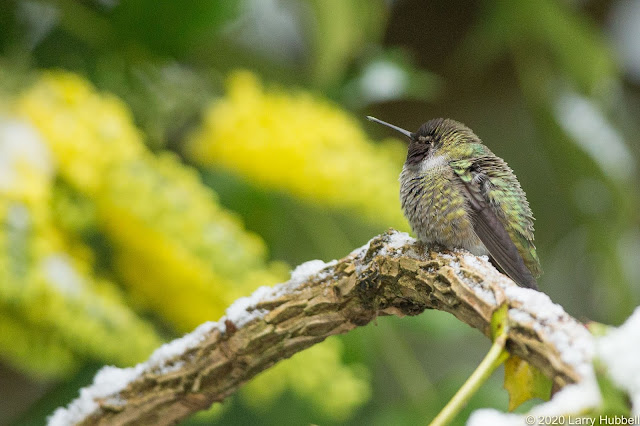 Occasionally, I also saw hummingbirds with their eyes fully closed, but it was the nectar that I found most thought-provoking. I cannot remember any avian species which allows its bill to get 'dirty' and stay that way. Cleanliness is critical to the health of almost all birds. 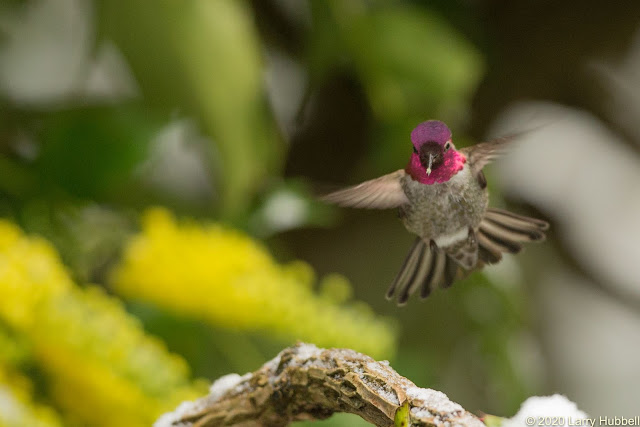 During the snowstorm, I also saw more male hummingbirds than females. Mature males have the dark hoods which reflect brilliantly when they are at just the right angle. They also tend to be more aggressive and territorial. 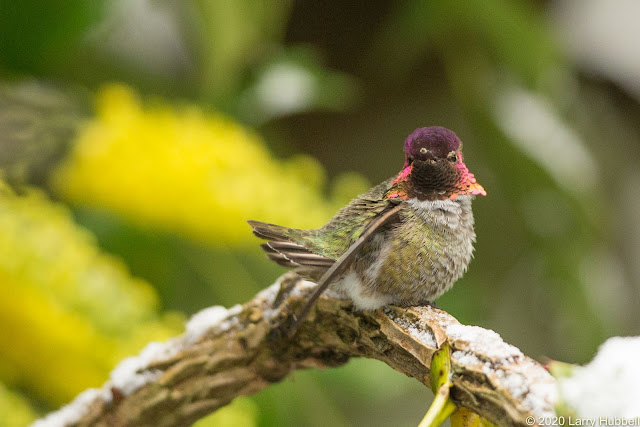 In addition to the whitish spec on the bill, the color of the tail feathers on Anna's Hummingbirds are also worth observing. 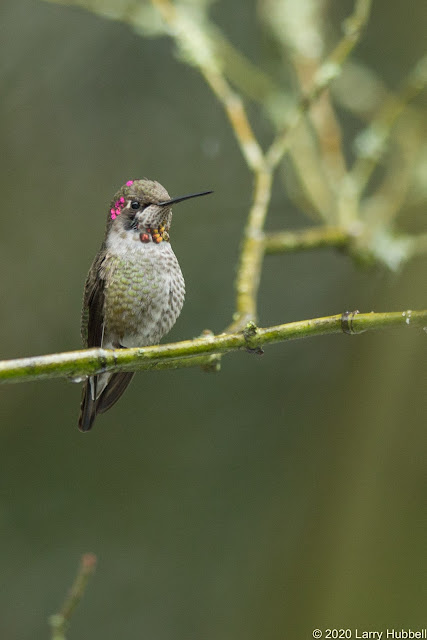 Sporadic red reflective feathers about the head - where the 'hood' will ultimately develop - are generally an indicator of an immature male. 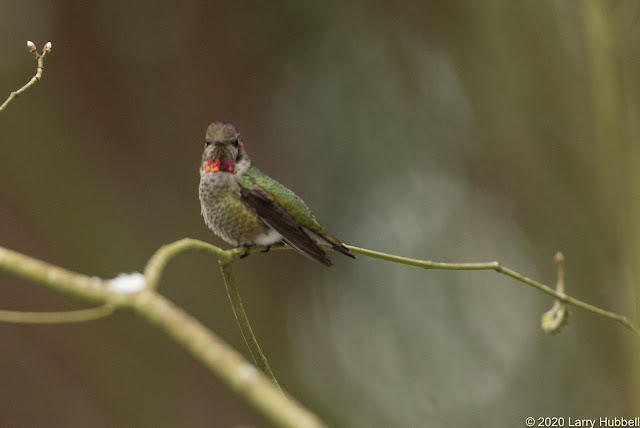 Distinguishing young males from adult females can be tricky. Females generally only have red reflective feathers on their throats, although exceptions are possible. Since young males can sometimes reflect primarily from the neck area certainty is not always possible. 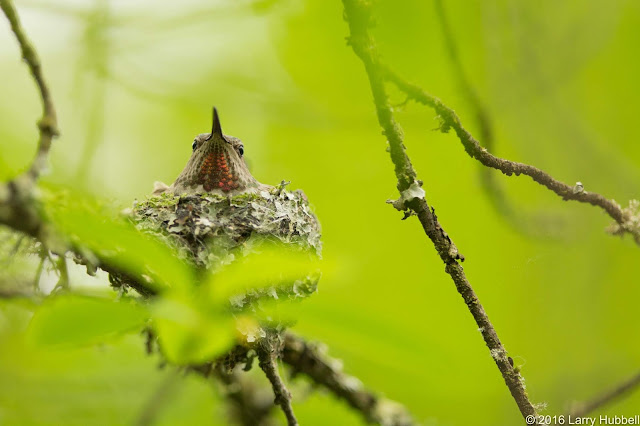 One exception is during the nesting season. You can be virtually positive that a bird with neck-only reflectors while sitting on a nest, is female. Males, and especially young males, do not normally participate in brooding. 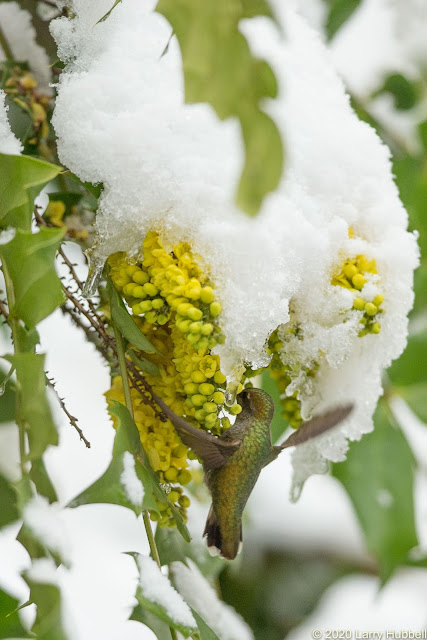 Do these tail feathers differ from those you noticed earlier? 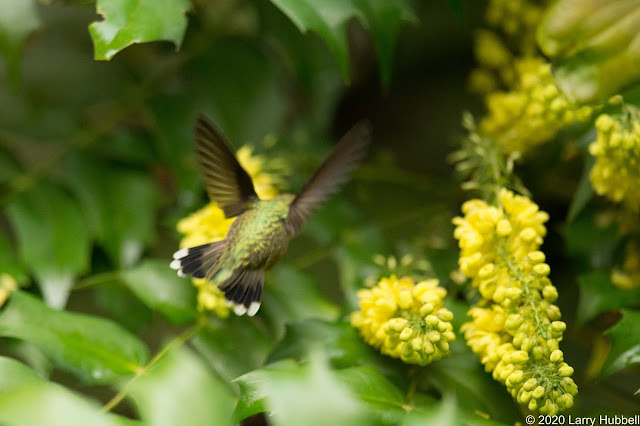 Mature females have progressively larger white spots on the terminal ends of their outer tail feathers. Although, even here, immature males can sometimes have somewhat similar coloring. 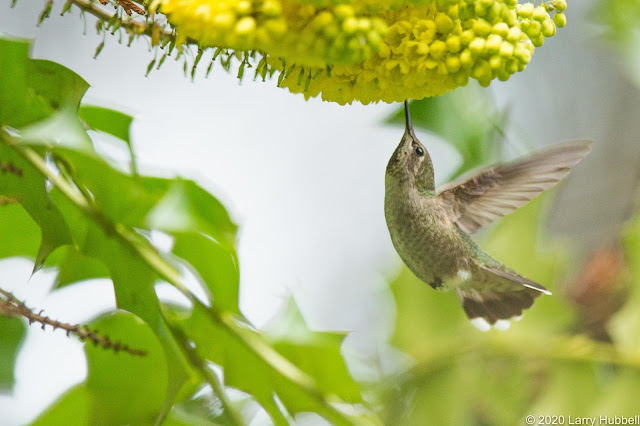 This final set of photos were taken, on Thursday, after the snow melted, 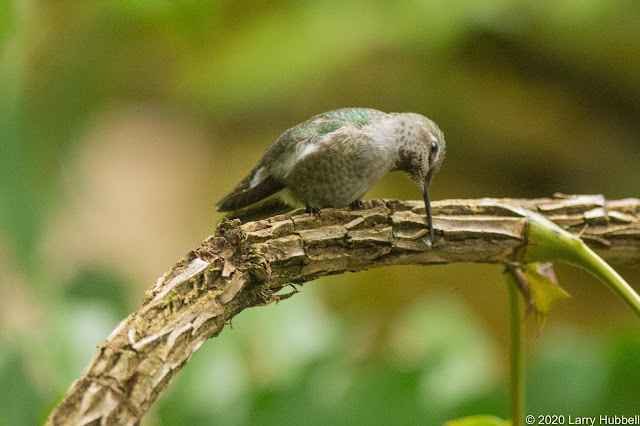 In these next three photos, the hummingbird was perched on the same branch as the male bird during the snowstorm (in photos six through eight). I suspect the bird in this photo is a female. She was wiping her bill on the branch e.g. feaking. 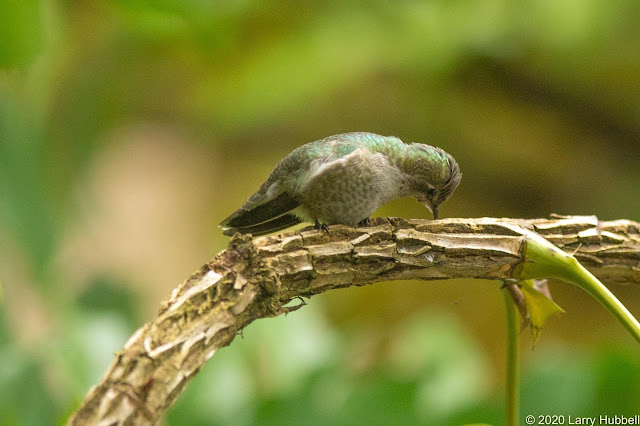 First, she wiped one side and then the other. 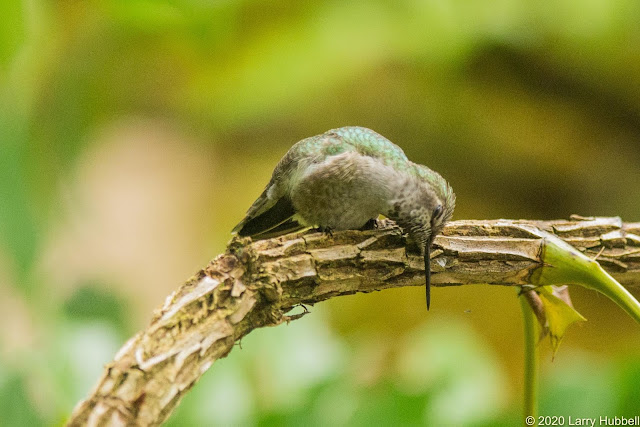 The result was a perfectly clean bill. Apparently, when the weather is cold cleanliness becomes a lower priority. 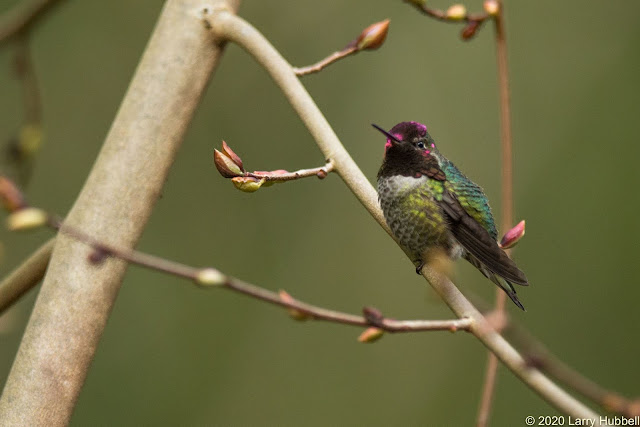 However, once things warm up a bit, their eyes open wide, their feathers are less fluffed and in general... 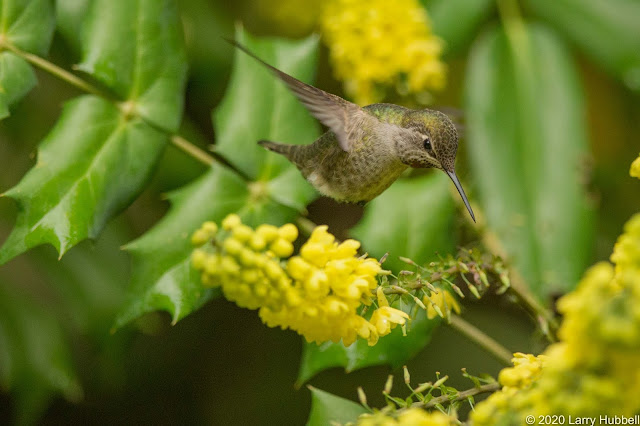 ...they have more time and energy to keep their bills clean and functional.

Have a greater day on Union Bay...where nature lives in the city! 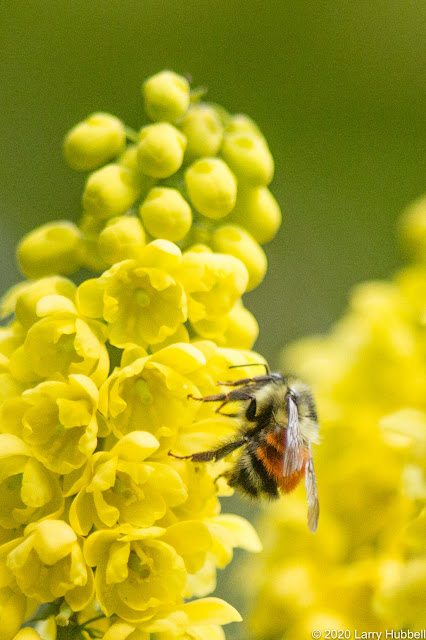 What species does this bee belong to? Is it native to our area?

Black-tailed Bumble Bee: This Bombus Melanopygus was active in spite of the cold and appears to be native to most of the western half of North America. Click on the highlighted name of the bee to read more. I assume the hummingbirds leave the bees alone because of the danger from a sting. As explained in the next to last paragraph at The Hummingbird Society.