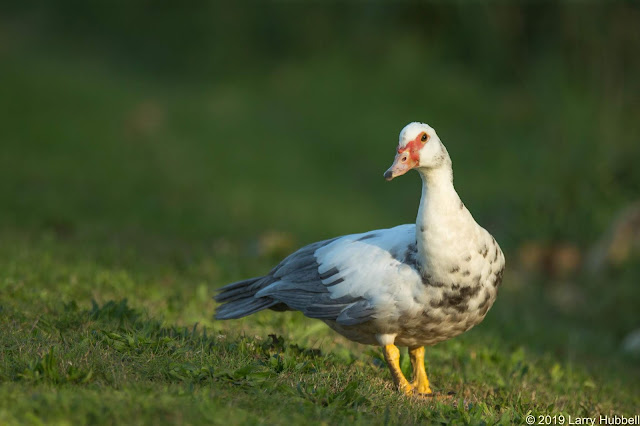 Last month, this bird was seen hanging out near the Conibear rowing facility. One of the critical clues to its identification is the red carbuncled area between the eye and the bill. 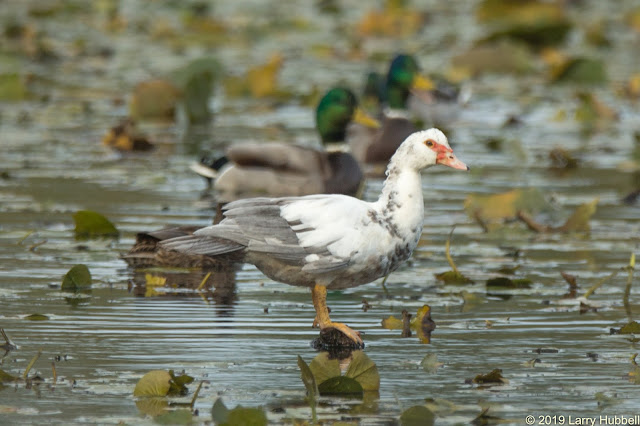 Another clue is its size. When compared with male Mallards, two of which are in the background, this bird is significantly larger. I cannot quite decide whether its size, behavior or color is its most striking characteristic.

One of the first questions to cross my mind was, Is this a duck or a goose? Mallards are the largest of our three most common, year-round, Union Bay ducks. Gadwalls are roughly ten percent smaller than Mallards, while Wood Ducks are approximately one third smaller.

Hint: The males of our unknown species can be as much as three times heavier than male Mallards. 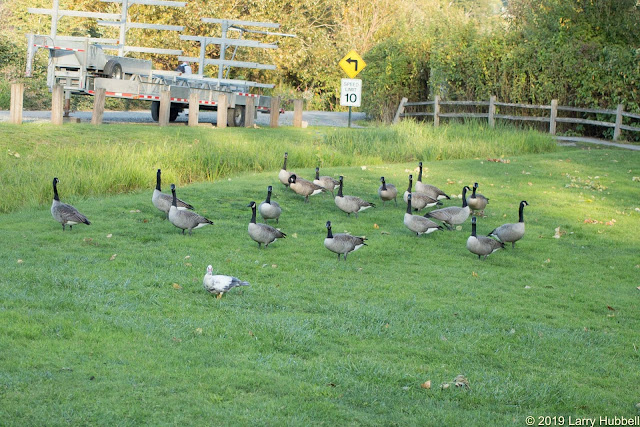 On the other hand, this species reaches only half the weight of the larger members of the Canada Goose family. However, there is a wide variety of weights among the Canada Goose subspecies, many of which weigh significantly less than our local variety. 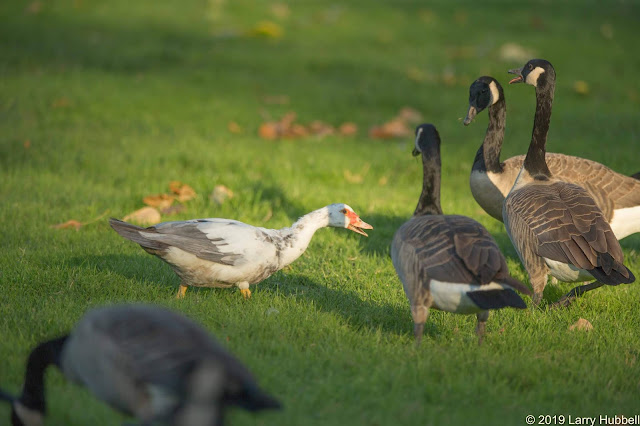 Still, this single smaller waterfowl ascribes to the theory that 'size matters not!' Surprisingly, the normally cantankerous Canada Geese grudgingly gave this creature its due. I watched the geese chasing each other, but none of them choose to harass this odd-looking bird. 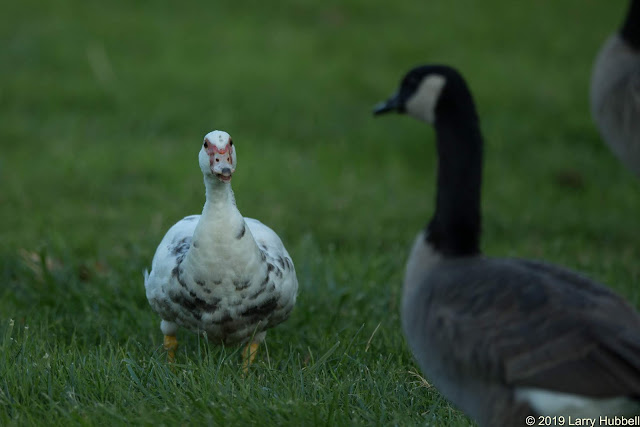 Its obvious confidence was quite inspiring. 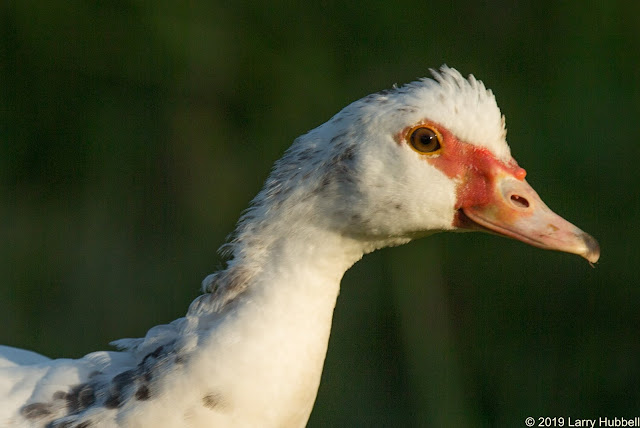 It was not the least bit ashamed of its odd-looking facial display and the fact that it was surrounded by a large flock of geese, each of which was taller and potentially twice as heavy, did not bother it at all. 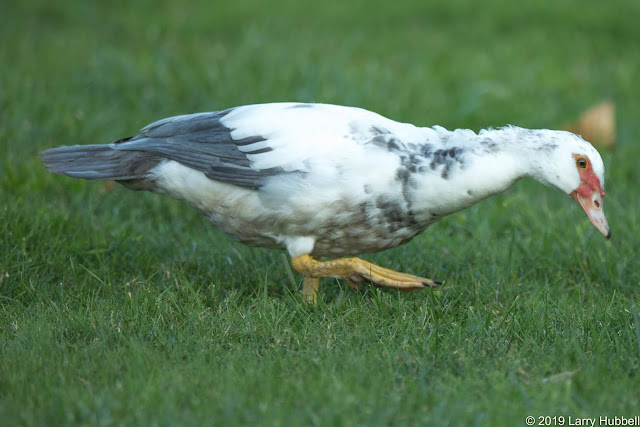 Look at the thickness of those legs. I wonder if its strength and claws might be the reason for the obvious respect from the Canada Geese. 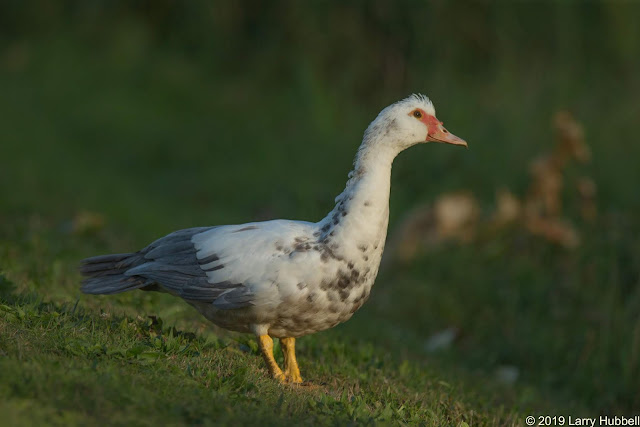 The bird did note my presence, but... 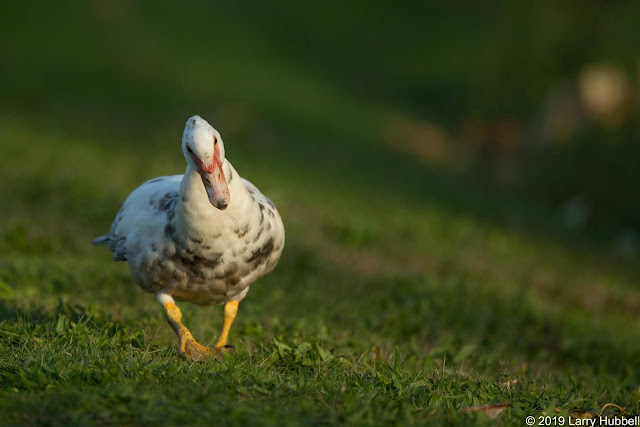 ...quickly returned to searching for food.

Another surprising behavior by members of this species is where they choose to rest and nest. Not only do they roost in trees at night they will also make their nests in tree cavities, just like Wood Ducks. I read that even though the females are only half the size of the males they still need an entry hole approximately eight inches wide to get into their nests. That is more than twice the required size for a Wood Duck.

The scientific name for this species is Cairina moschata. The common name is Muscovy Duck. Despite the name, this species did not originate in Moscow. There seem to be multiple theories regarding how the name may have originated. In any case, these ducks were already in the 'New World' before the arrival of Europeans and some of their species had already been domesticated.

If you follow the highlighted link (to All About Birds) you will see a photo of a duck with mostly black feathering. If I understand correctly, the basically black Muscovy ducks, with white spots, are the wild, undomesticated version of the species. The domestic birds apparently have more white feathering. Most likely our bird is a domestic Muscovy that escaped.

Their range in the wild was historically from Northern Mexico to Northern Argentina. I have read that with the help of human-built nesting boxes they are now moving over the border into Texas. 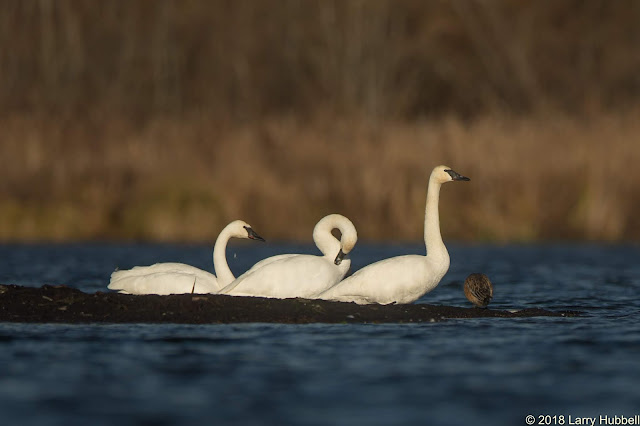 In nature, many white birds tend to breed in white snowy habitats. For example, Snowy Owls, Snow Geese, Tundra and Trumpeter Swans. Blending in with your surroundings is a clear advantage when trying to hide defenseless eggs in a nest. I have also heard of an opposite situation e.g. the occasional white mutation among prey species in non-white environments. They do not seem to last long. Most likely, because they are so obvious to predators.

Curiously, with domesticated creatures, the inverse motivation appears to be true. I suspect owners of domesticated animals prefer for them to stand out from their surroundings. It makes them easier to spot, catch and retrieve. So as a result white is a handy color for sheep, pigeons, doves, domesticated geese, rabbits (which magicians pull out of their hats), etc. However, it this is a true human preference I have to wonder why more dogs are not white - especially after being involved in the longest known period of domestication?

Have a great day on Union Bay...where nature live in the city! 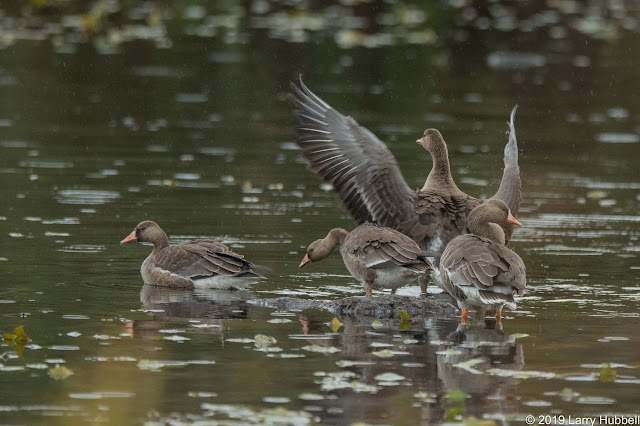 Are these birds native to Union Bay? (They were seen this morning from the Union Bay Natural Area.)

Also, are they ducks or geese?  I will give you two hints.

A) These birds are usually smaller than male Muscovy Ducks.

B) One of these four birds is more mature than the other three. 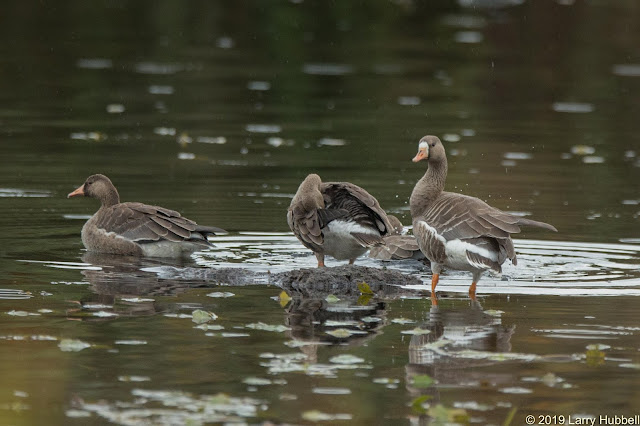 These are Greater White-fronted Geese. The adult has more white above its bill than the juveniles. They generally breed in the far north and winter in places like Mexico, Texas and California. However, they do have to migrate from one location to the other. Occasionally, them may even decide to spend some time in the Pacific Northwest. I guess the best answer is they are native migrates at Union Bay.

Finally, just to confound my previous logic, even though these birds breed in the far north, at no time are the adults primarily white in color.

Posted by Larry Hubbell at 1:12 PM