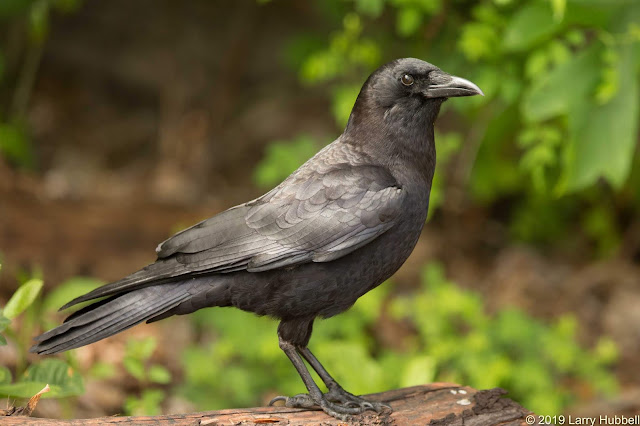 The intelligence of an American Crow allows it to find food in an amazing variety of ways. One of the most surprising for me happens in late Spring after the Sticklebacks have returned to Union Bay to spawn and die. Crows can be seen gliding down to the surface of the water and picking up the floating bodies of the small fish. 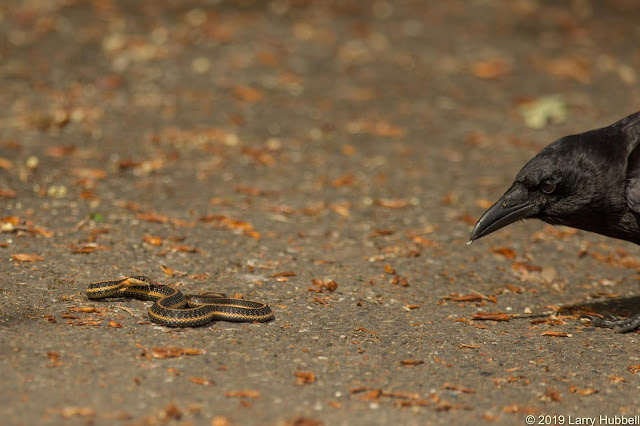 This week provided another American Crow surprise. While walking along the gravel road, north of the Montlake Cut, I glanced up just in time to avoid flushing a crow. The black bird was intensely focused on something in the middle of the road.

Looking more closely I noticed a small snake. The snake's little red tongue was frantically tasting the air. Its body was coiled and tense. The undersized serpent studiously stared at the crow, obviously aware of every move. Given the size difference, I expected the crow would grab the snake by the tail, snap it like a whip and fly off with a fresh lunch. 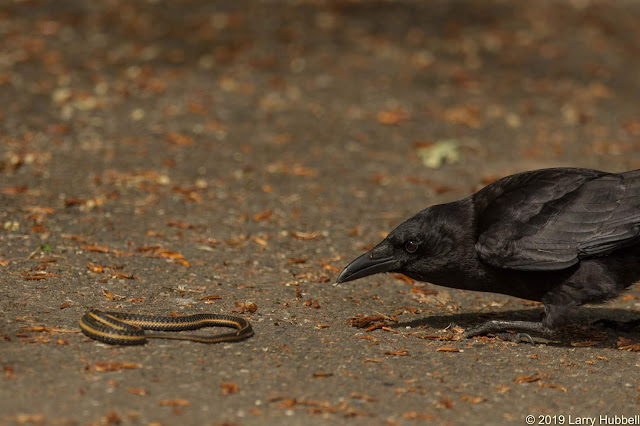 In a surprisingly slow manner, the crow simply crept closer. Clearly, its curiosity was tempered by something - uncertainty, fear or possibly well-informed respect for the tiny snake.

Later, a family friend explained that garter snakes have tiny needle-like teeth which can pierce the skin. Also, multiple websites state that garter snakes are now known to have a mild venom, which was a surprise to me. Apparently, their venom is fairly harmless to humans. Even so, 'snaketype.com' recommends having a doctor take look if you are ever bitten by a garter snake. I was also surprised to learn that garter snakes can eject a foul-smelling musk, which is used to discourage potential predators. 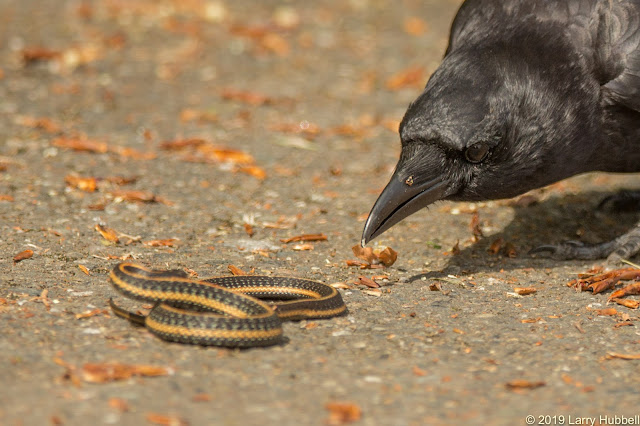 In retrospect, I wonder if the little brown spot on the righthand side of the bird's bill might have been a bit of the snake's musk. 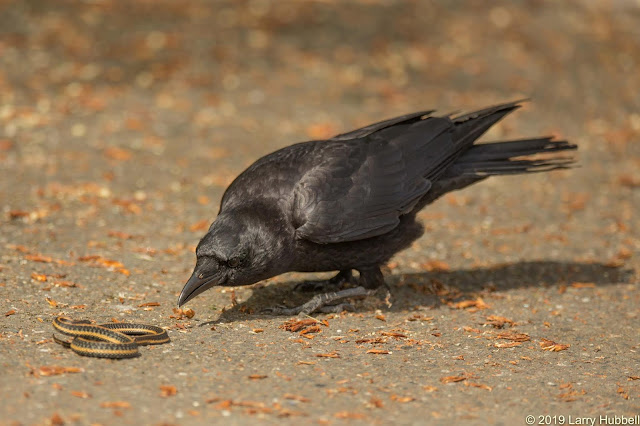 The crow was clearly curious and quite tense. I wonder if snakes and crows experience adrenaline, like humans. The focus and intensity sure looked familiar. I suspect it felt similar to when I met a mother bear and her cub, while alone in the woods. 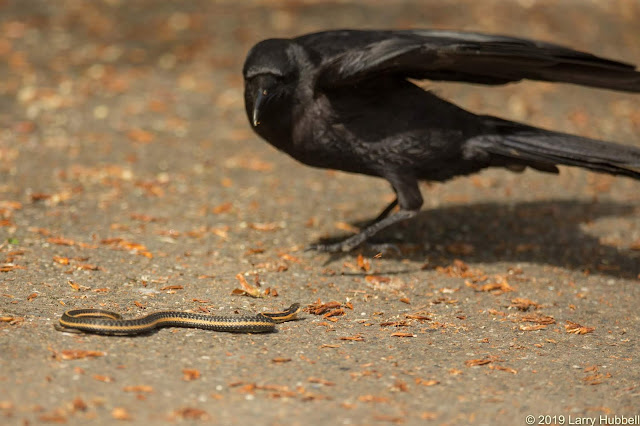 A moment later, the snake struck. The crow leaped back. For the first time, I realized one of the benefits of having legs which bend backward. The reverse bend, as compared to humans, appears to make it easier to leap away from danger, without turning to run. This enabled the crow to avoid the strike while also staying perfectly focused on the threat. 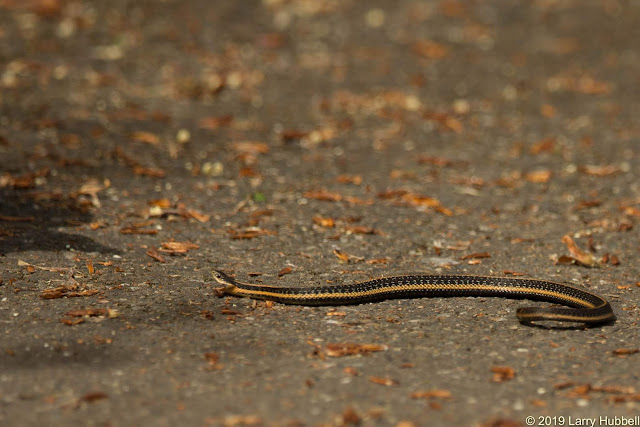 When the crow circled counter-clockwise, the snake took another shot. 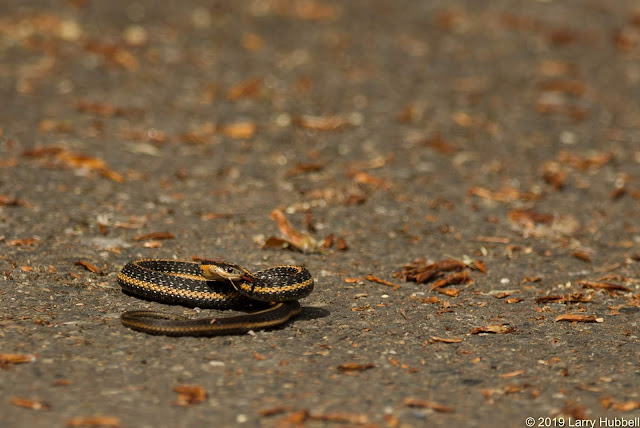 Almost immediately, the snake was coiled up and ready to defend itself, again. 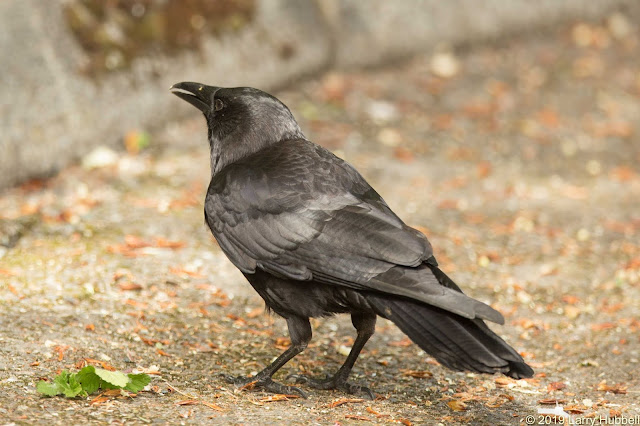 The crow moved a few feet away and even turned its back on the snake. Maybe, the crow was hoping the snake would disappear while it was not looking. I certainly expected it to quickly slither away. 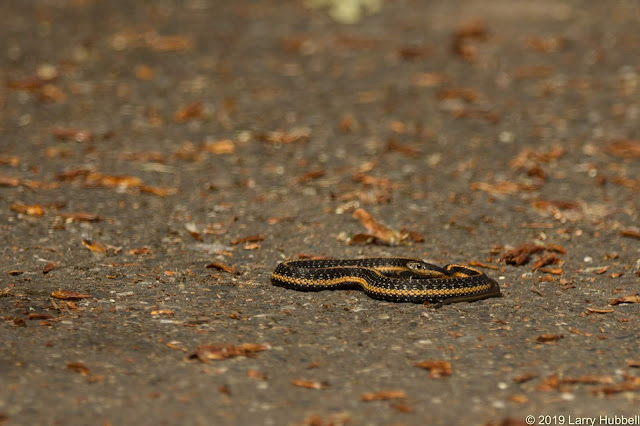 Instead, the snake simply watched and waited 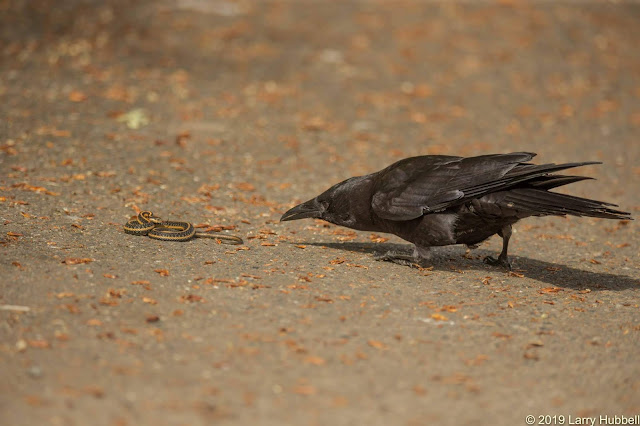 Soon, curiosity got the best of the crow and it circled around for another look. 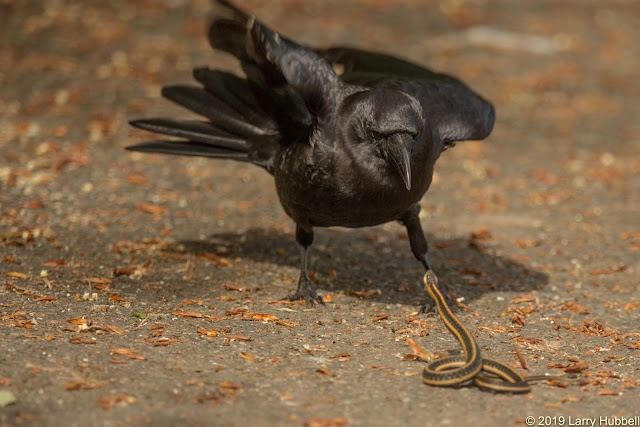 Once again, the snake struck and the crow leaped back. 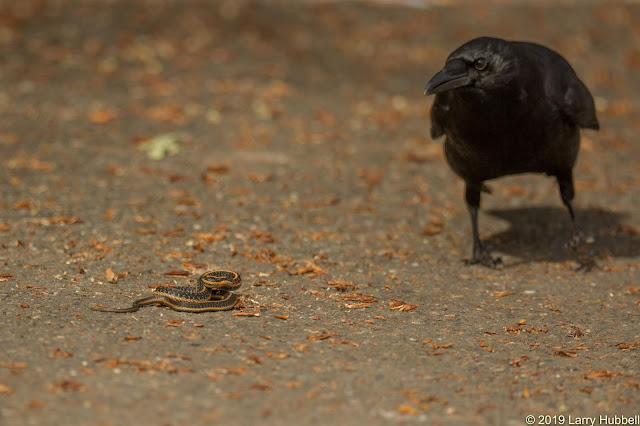 The snake recoiled and flicked the air with its little red tongue as if to say, 'I'm ready, take your best shot, big guy.' 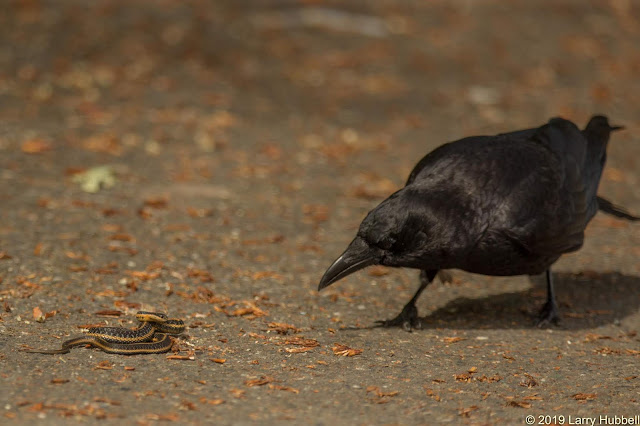 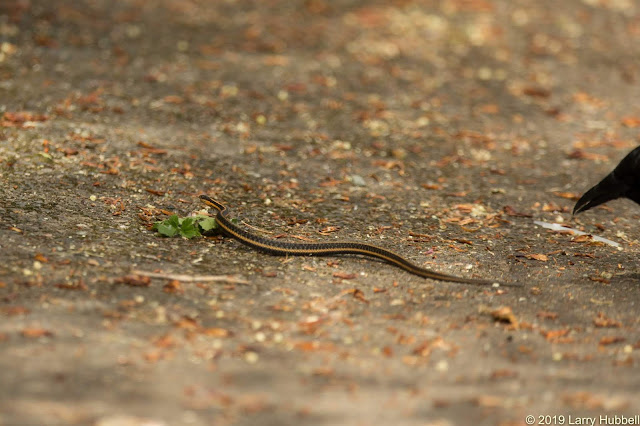 This time, as the crow circled to the south it apparently opened up an escape route. The snake began wiggling away to the north. 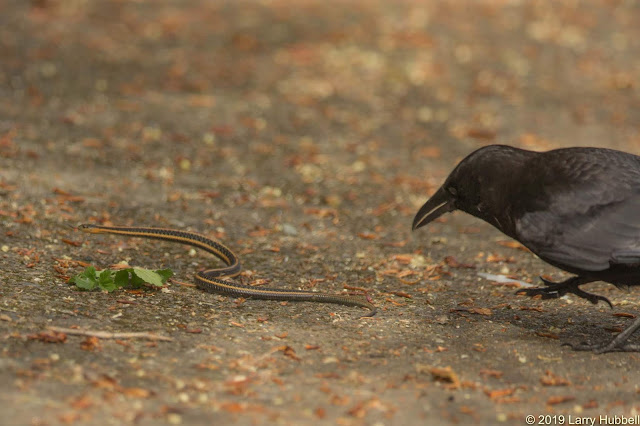 With the crow in close pursuit, I thought for sure the snake's tail would be irresistible.  Of course, this is the same end of the snake which may have sprayed the crow with musk. 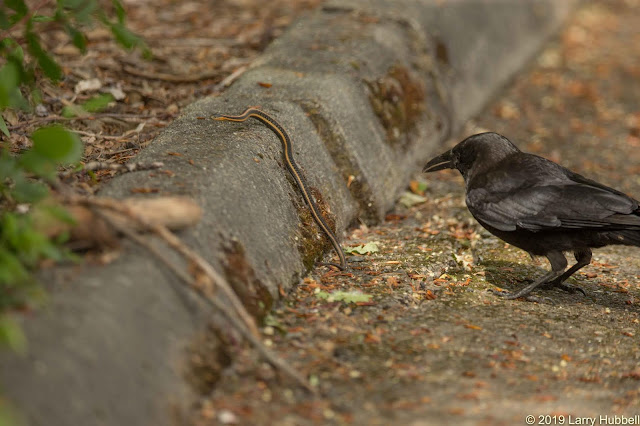 I was surprised by how easily the snake attempted to navigate the nearly vertical surface when it reached the curb without being detained. 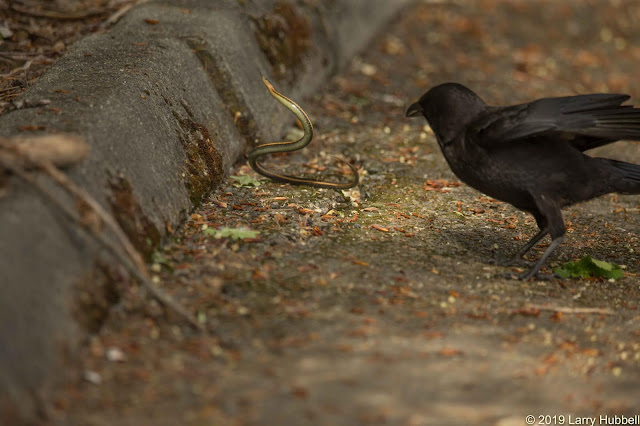 A moment later, the snake lost its traction. It fell back - landing directly in front of the crow. The crow was now perfectly positioned to strike. The little snake was almost literally between a rock and a hard place.

Surprisingly, the crow lifted its wings and stepped back, apparently, fearing the snake would attack it. Later, someone suggested that crows may have an innate fear of snakes, just like humans. At the very least, this crow had a healthy respect. 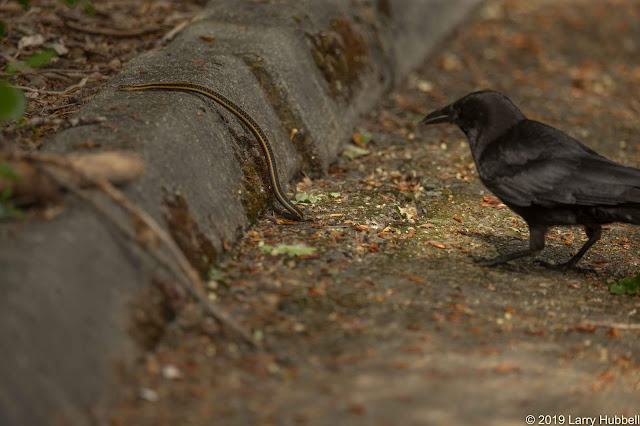 The snake seized the moment and leaped vertically again. The crow edged closer. 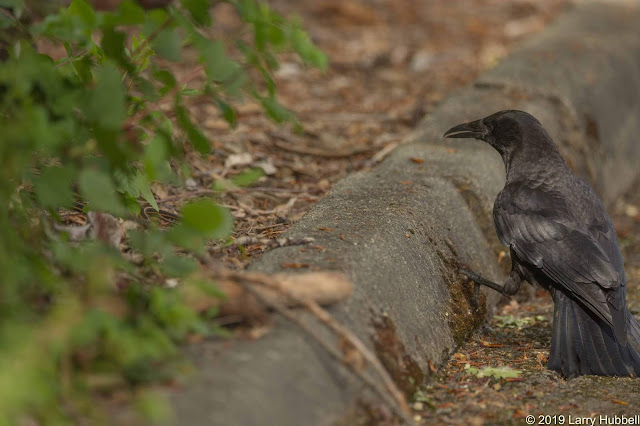 But, this time, the snake made it all the way up and over the curb. As the crow watched, the snake silently slithered away. Belatedly, the crow made a half-hearted attempt to search through the foliage, but the snake was safely hidden somewhere beneath the bushes and the brush. 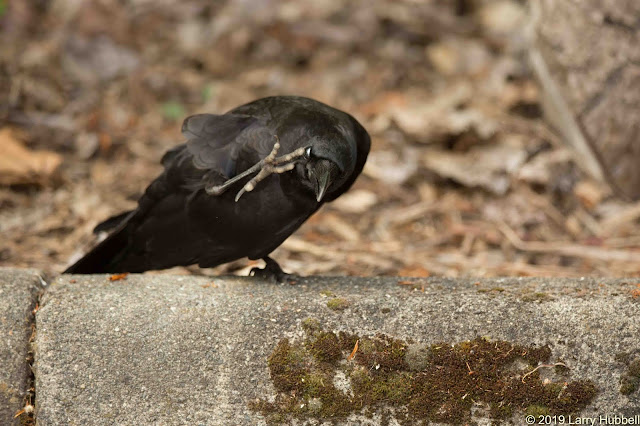 Afterward, the crow wiped its beak on the curb and attempted to clean its face with its foot. This seemed to reinforce the idea that the snake may have sprayed the crow with its foul-smelling musk.

Update: There is some debate about how the musk exits the snake's body, e.g. spray vs exude or excrete. I cannot say positively, since I have not see it happen.

Thank You to Eric, Gary and Richard. Each of whom wrote in to confirm that garter snakes do not spray their musk. Apparently, they excrete it. Richard even provided a link to a scientific study of garter snake musk. You can read his perspective and see the link in the Comments section below. 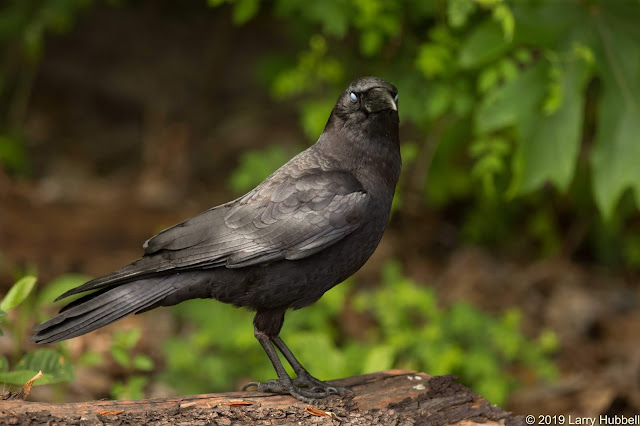 Finally, just before flying away, the crow turned and glanced in my direction. The closing of its inner eyelids gave it a bit of an evil look.

I am left to wonder about the crow's hesitation. Was the smell of the musk what made the crow unwilling to attack? Are garter snakes actually dangerous to crows? If so, Do the crows understand the potential danger? or Do crows simply fear and respect all snakes? One thing is for certain, this crow was intelligent enough to be both curious and careful. 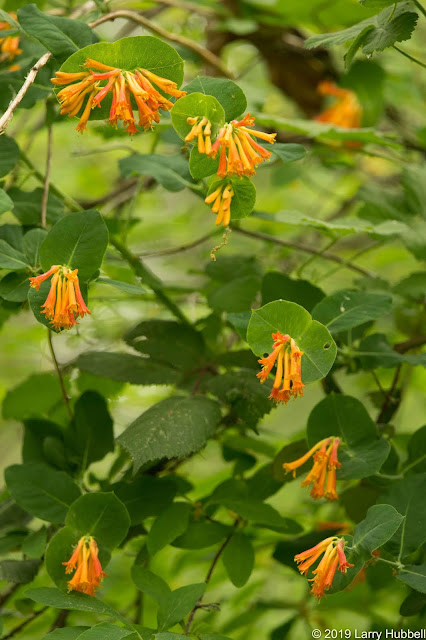 Orange Trumpet Honeysuckle: Surprisingly, this is both a native plant and a garden favorite.


My email address is LDHubbell@comcast.net
Posted by Larry Hubbell at 12:58 PM