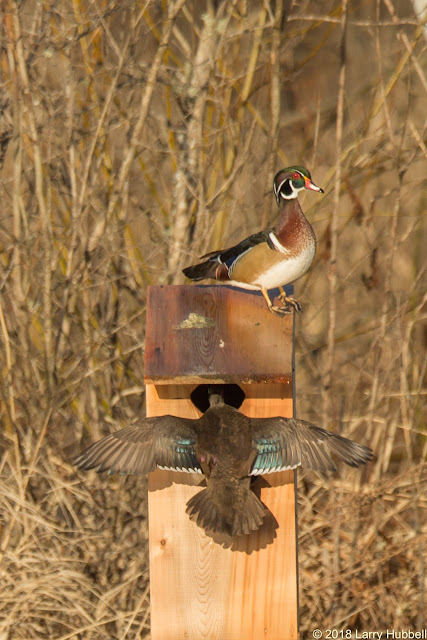 The snow is gone and even though the cold wind still blows, Spring is on the way. This photo from last year at about this time shows a female Wood Duck checking out one of our new nest boxes. She was obviously looking for a a place to lay her eggs. Her mate was watching carefully. Apparently, he was trying to protect her from the unwanted advances of any other male Wood Ducks. My friend, Martin Muller, suggested this type of behavior is called 'Mate Guarding'. 'Tis the season for Wood Duck reproduction.

Any day now our team of Union Bay observers will begin watching Wood Ducks. The behaviors we will be looking for include inspecting-nests, egg-laying and mate-guarding. The ultimate dream behavior would be to watch ducklings, within 24 hours of hatching, jump out of a nest box. Ducklings are precocious. They do not wait around. By their second day they are walking, swimming and feeding themselves. The ducklings certainly know how to hit-the-ground-running or more precisely, how to land-on-the-water-feeding. 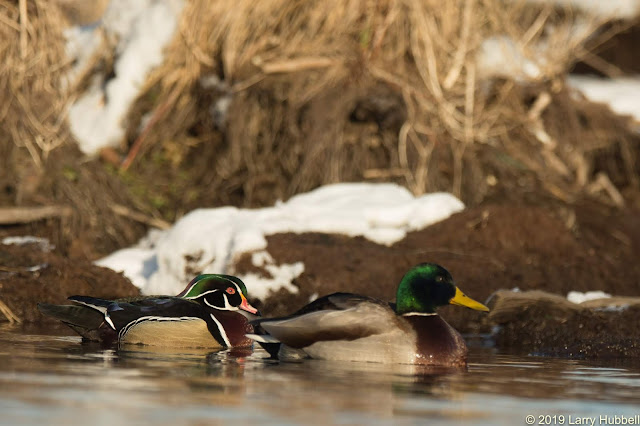 The Spring and Summer of 2018 was the first breeding season with our new Wood Duck nesting boxes in place. We recorded our observations and made some interesting discoveries. For example,
We have inspected seven of the ten boxes and found clear indications of egg laying in three of the boxes. At least three more of the boxes contained one or more feathers which indicated they were probably inspected by a female Wood Duck.


The challenge in this week's post is to determine the appropriate season for each of the following four sets of three photos.

The bulleted information above provides some clues. Looking closely at the vegetation in the photos may help. Plus, it is good to know that in the Summer, males lose their beautiful breeding plumage. However, they keep their brilliant red eyes, even in their non-breeding, e.g. eclipse, plumage.

For advanced credit, you could also try organizing the three photos inside each season by their appropriate month. In the complete set of 12 photos, each month is represented just once. To simplify the process I consider the December, January and February photos to be in the Winter season. March, April and May I categorize as Spring. June, July and August are in the Summer set. Which leaves September, October and November as Fall.

Note: The terms, Sets 1, 2, 3 and 4, do not correlate to the natural arrangement of the seasons. Each of these headers, is only a 'bucket' into which I have collected three photos from a single season. Your challenge is to figure out in which season each set of these Wood Duck photos was taken. Good Luck! 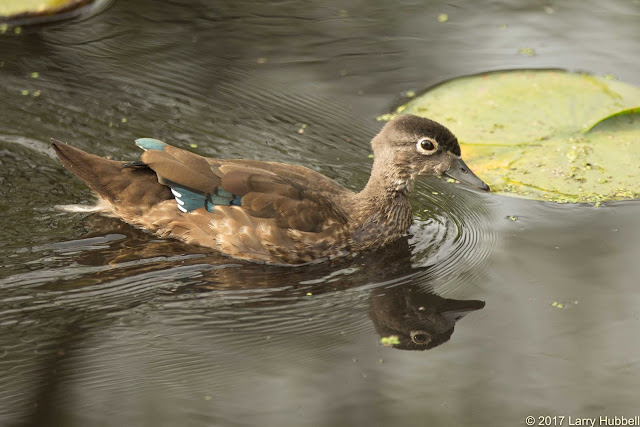 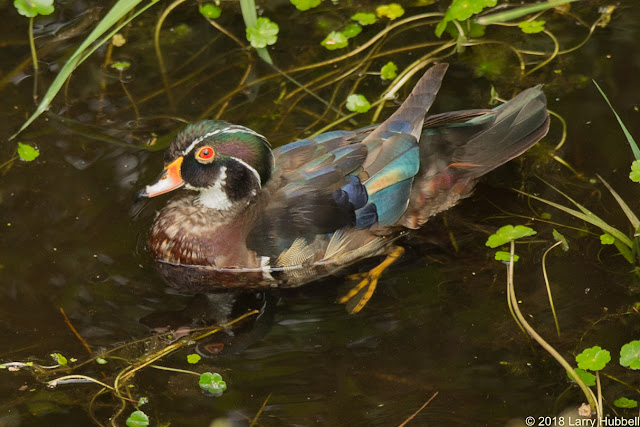 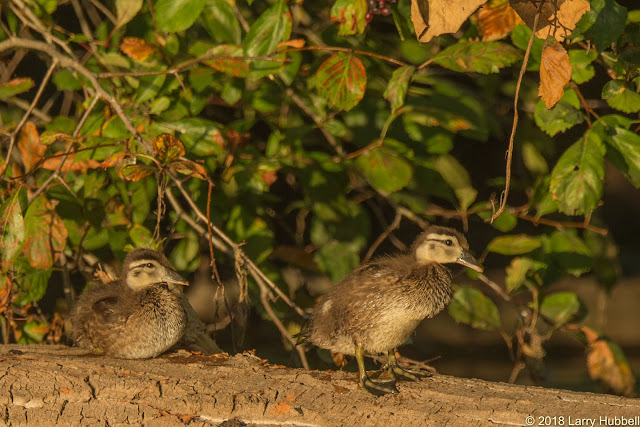 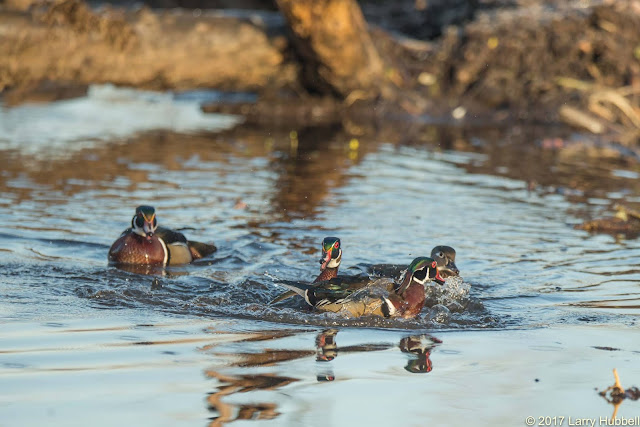 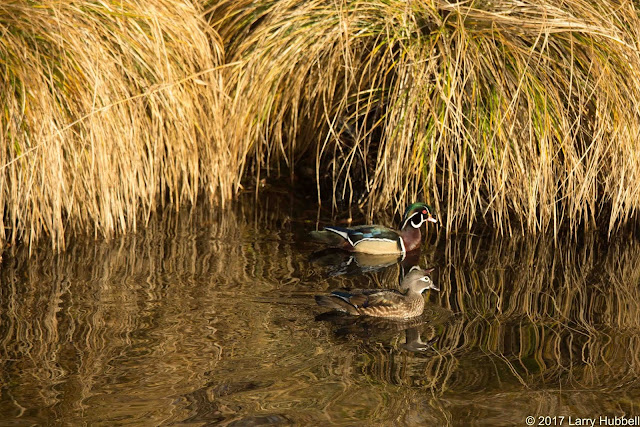 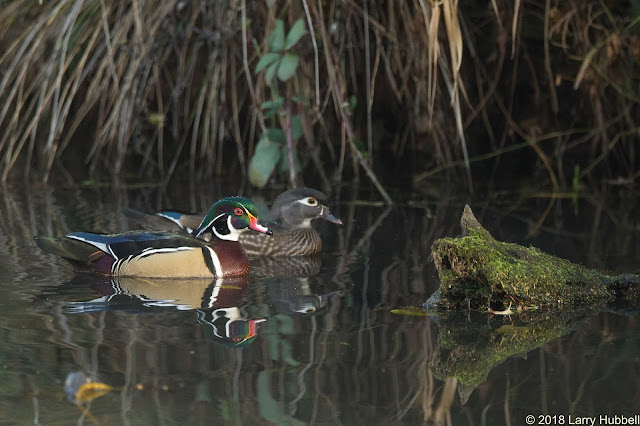 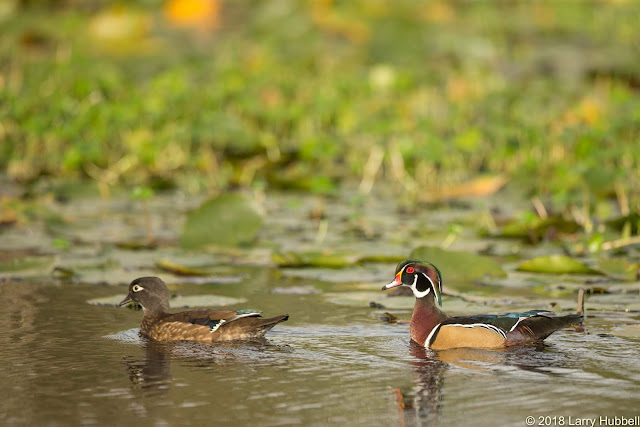 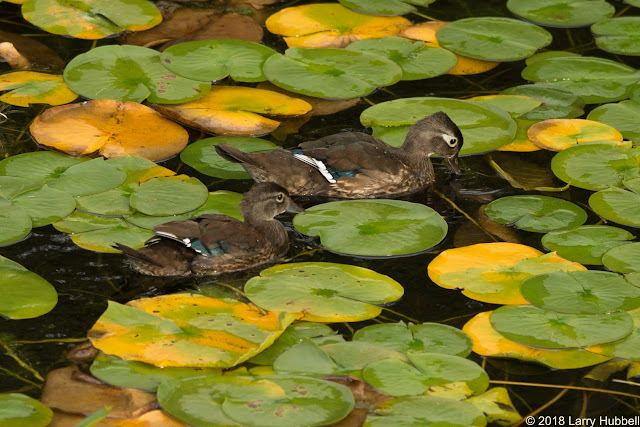 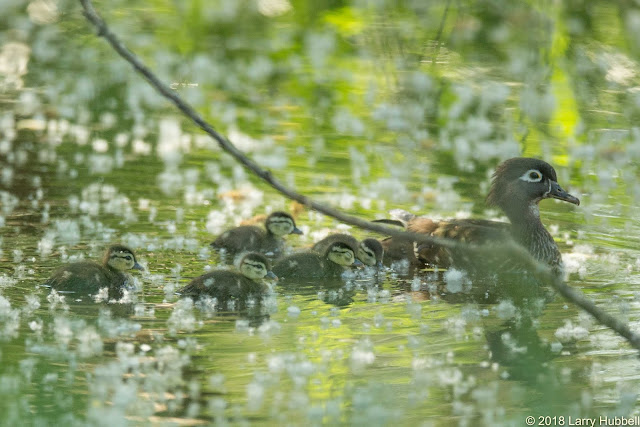 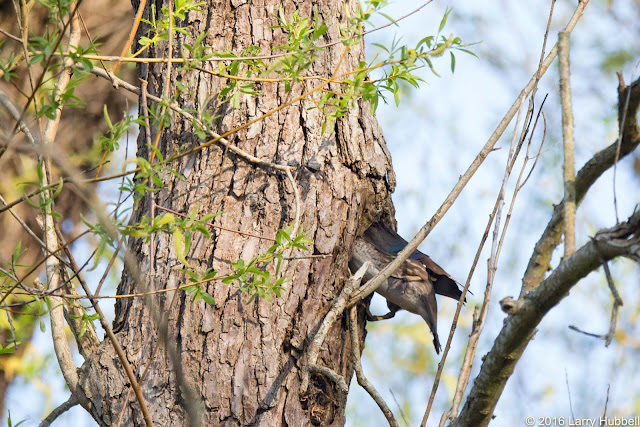 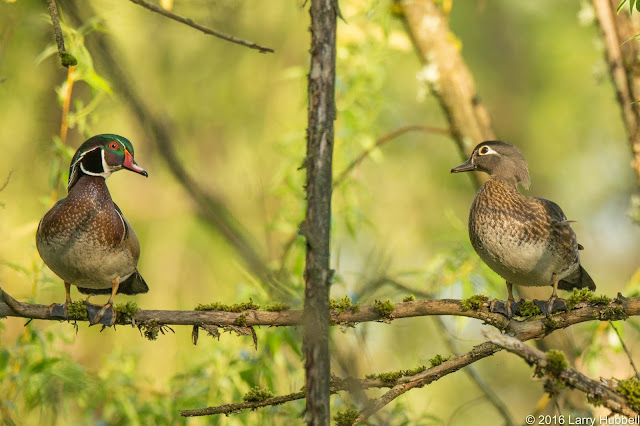 Beyond this point you will see the photos reorganized by season and month.

This is a photo of a female entering a natural cavity in a tree. It was taken at the end of March. The timing means we could debate whether she was inspecting a potential nest site or actually entering a nest to lay an egg.

This early April photo shows a male guarding his mate. I have read that during the first ten days of egg-laying the female lays the egg and then leaves the nest - with the male still in attendance. Not until she feels she has a nearly full brood of eggs does she begin incubation. By starting the egg development process at a single point in time, she attempts to insure that all the ducklings will leave the nest on the same day. Once the female starts sitting on the eggs, the male figures his work is done and apparently he feels he had nothing left to protect. The female is on her own.

The cottonwood down in this photo obscures the clarity, but since cottonwood trees begin to heavily drop their down in late-May, it is a likely indicator of late Spring. Although, one could argue that early June would be just as likely. That argument is logical, except in the case of this challenge, the other two photos in this set were not Summer time photos.

The red eye, plus the red and orange color at the base of the bill, are clear year-round indicators of an adult male. The tattered looking feathers indicate breeding season is over and the male is beginning to replace his feathers with a more feminine-looking, non-breeding plumage, e.g. eclipse plumage.

These ducklings are no longer newly hatched, but given that they are still fairly young we have to be in either late-Spring or the earlier half of Summer. The dried yellow leaves in the photo should have helped you think Summer instead of Spring.

I believe this is a hatch-year Wood Duck because all of the feathers on the head appear to be almost exactly the same length. The white around the eye makes me think it might be a female. However in August, first-year males typically do not yet have the red eye of an adult male, so the gender of this bird remains unknown.

Note: The lily pad in the photo is nice and green, while the duckling is getting close to full-size. Hence, this photo had to be in late Summer of early Fall. 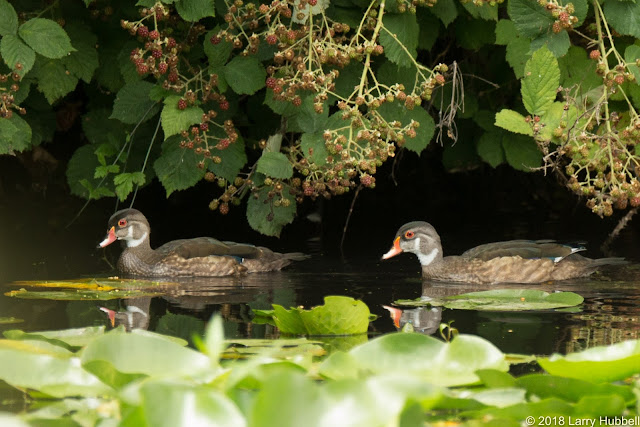 This photo is full of hints. First, the lily pads are starting to turn yellow so we are no longer in Summer, however, many of the plants are still green so it cannot be too late in the Fall. The adult female is being followed by a first-year bird which is another indicator of early Autumn. Soon, the young bird will get its adult plumage and then go its separate way in life.

By the way, did you notice the hint of white 'fingers' on the lower portion of the young duck's face? These white markings are most consistently found on adult males. On an obviously young bird, still following its mother around, it seems logical to conclude that the white-fingers probably indicate it is a first-year male, whose eyes have not yet turned red.

The male is in his bright, freshly-minted breeding plumage while the lily pads are looking a bit sparse. I believe the majority of the plants in the background are a form of wort which reaches its prime after the lily pads begin to decline. Admittedly, this is hard to see with the focus in the photo being on the ducks. There are no longer any young ducks hanging around the female.

This photo contains the least amount of green in the Fall set. So, we can conclude it was taken in November.

The total lack of any bright green foliage hints at Winter. However, there is a slight touch of yellow-green in the foliage, just above the male's head. This, along with the untrodden look of the vegetation indicates early Winter.

This Winter photo shows a group with more male than female ducks. In spite of the uneven numbering, the gathering looks quite peaceful. Maybe the intensity of breeding season has not yet begun. Along with the total lack of green, these two hints point towards mid-Winter.

In this, the last photo of Winter, the male Wood Ducks are competing for the female's attention. If I remember correctly, I had the impression she had already selected a mate, but the other males were intent on getting her to reconsider. Breeding season was just about to begin.

This post is dedicated to Chris Kessler, for his weekly dedication and partnership in watching the Wood Ducks and their boxes during every week of the 2018 season!

If you are interested in learning more about Wood Ducks and documenting their behavior while devoting a few hours, every week to observing the nesting process around Union Bay, please let me know. My email address is at the bottom of this post. 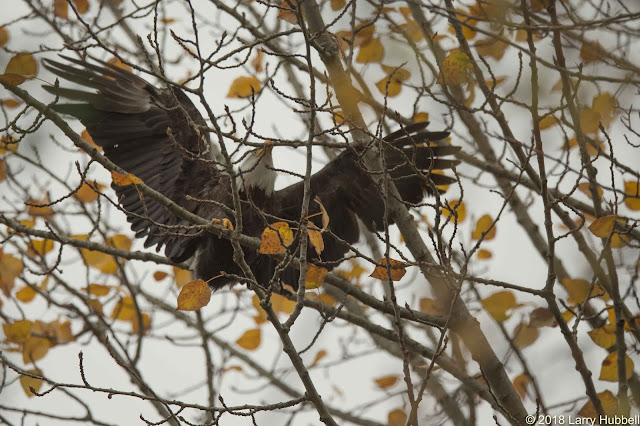 In this December photo, we see Monty in the background selecting a branch to add to their new nest. The branch is from what type of tree? Note: All the foliage in this photo is from the same kind of tree. The shape of the leaves is a critical hint. Is the tree native to Union Bay?

Black Cottonwood: Yes, it is native to Union Bay. Click Here to read about a half a dozen different creatures which utilize this tree. Also, 99.9% of the branches, which I have seen, our local eagle use in nest building have come from Cottonwoods. Plus, two out the three Union Bay eagle's nests are located in Cottonwoods. In addition, all three pairs of local Bald Eagles have one or more favorite hunting perches in a Cottonwood Tree.