Because of our unusually abundant snow, people have been asking questions like, How are the birds doing? Are the eagles O.K.? Does the snow in their nest cause a problem?

I suspect our biggest concern should probably be for smaller birds. Little bodies have more surface area per ounce and so they lose heat more rapidly. Hummingbirds may have the greatest challenge. Not only do their winter flowers get covered with snow but liquid feeders freeze. My friend, Elaine sent in a creative idea. She attached an aluminum can with a candle under her hummingbird feeder to keep the life-giving liquid flowing.

These questions caused me to wonder which of our local bird species would I select as the one best able to handle an extended cold spell. 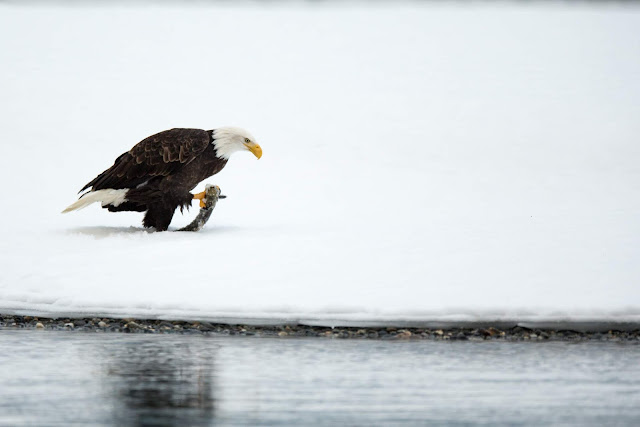 Eagles are especially hardy. In Alaska, I watched Bald Eagles pull salmon on to the snow-covered shore of the icy Chilkat River. They seemed to totally ignore the cold. They would be a logical choice for our local All-Weather title. 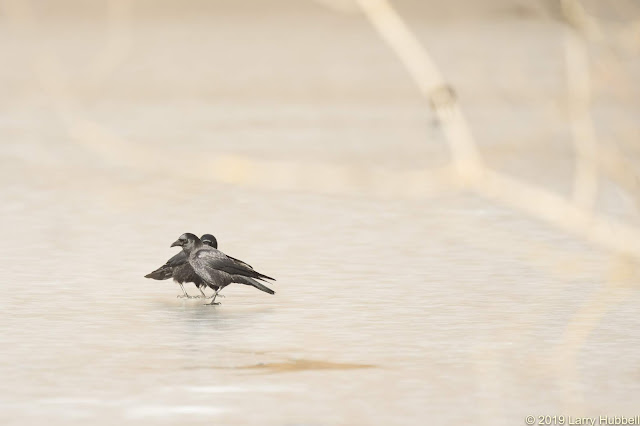 Early this week, American Crows looked perfectly at home on the ice, which covered the main pond at the Union Bay Natural Area. They too could easily qualify as an avian All-Weather species. 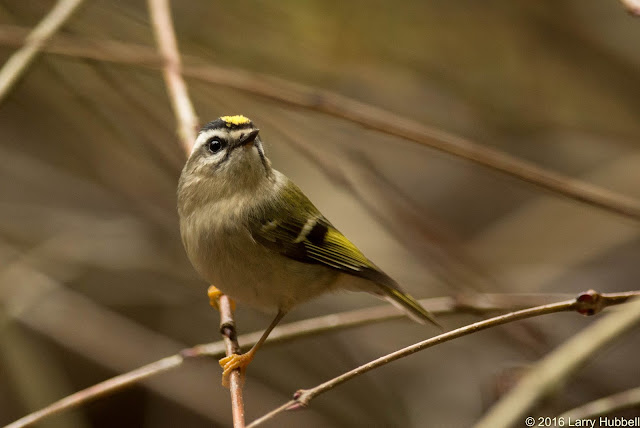 A Golden-crowned Kinglet is a very small, delicate-looking little bird. Unlike an eagle, it does not have feathers to keep its legs warm.

A hundred Kinglets, at less than half an ounce each, would not come close to the weight of a single eagle. I suspect, their speed of heat loss must be orders of magnitude faster than a Bald Eagle. Surprisingly, Golden-crowned Kinglets still get my vote for our local All-Weather species.

In 1847, Carl Bergmann proposed that many species tend to have larger individuals in colder climates. I believe this rule holds true for Bald Eagles, Bears and many other creatures in North America, however, it is not universally true. 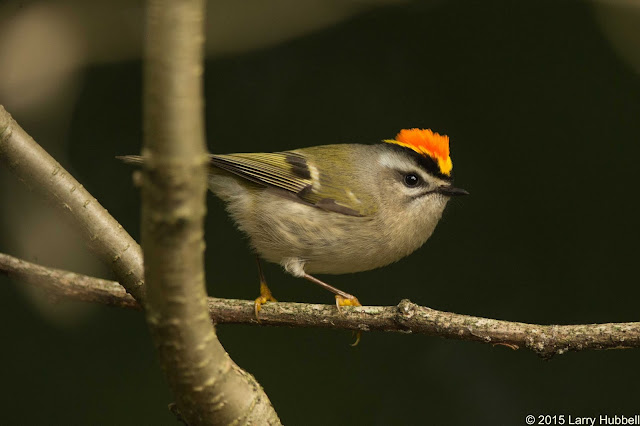 A male Golden-crowned Kinglet defending its territory. Females do not have this vibrant orange in their crowns. The males only display this 'shocking' color when excited.

A male, in his most aggressive stance, is not particularly intimidating - unless you happen to be in his weight class. 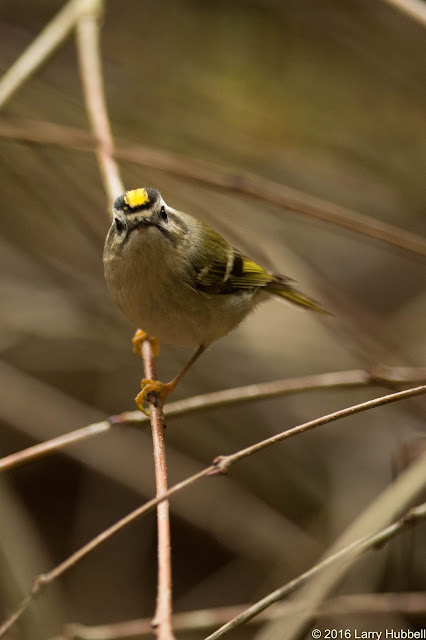 Still, one can feel a certain ferociousness when a Kinglet looks you in the eye. I wonder if this attitude translates into an abnormally strong will to survive. 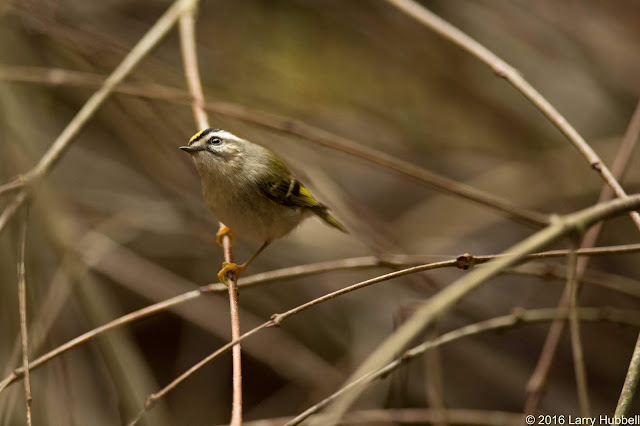 Generally, I see Kinglets looking for sustenance while darting, dashing and hovering among small branches in trees or bushes. 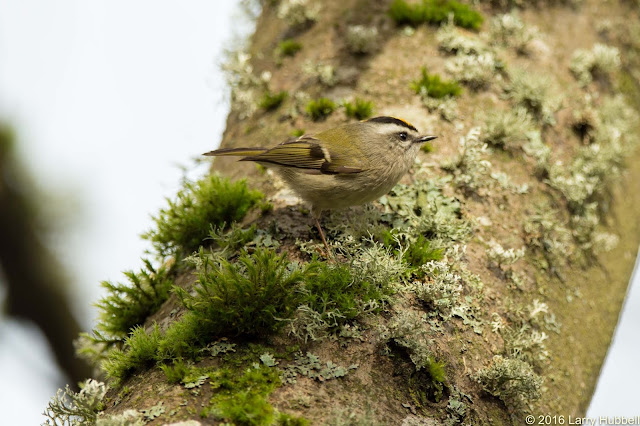 However, the size of the branch is not critical, it is their nearly constant need for food which drives their choices. 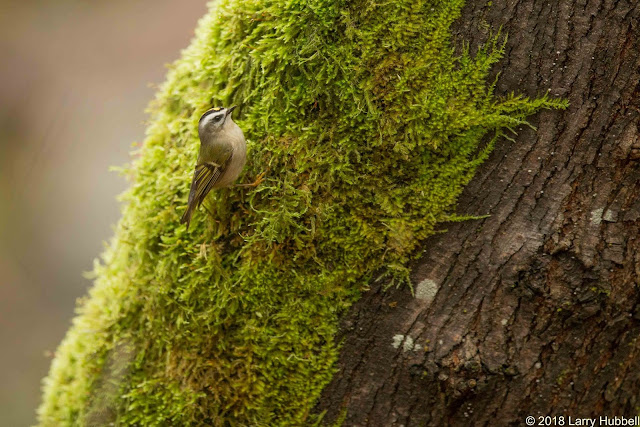 This may be my only photo of a Golden-crowned Kinglet searching for food on a sizable tree trunk. The crevices, lichen, and moss do provide great hiding spots for tiny ants, spiders, and grubs. 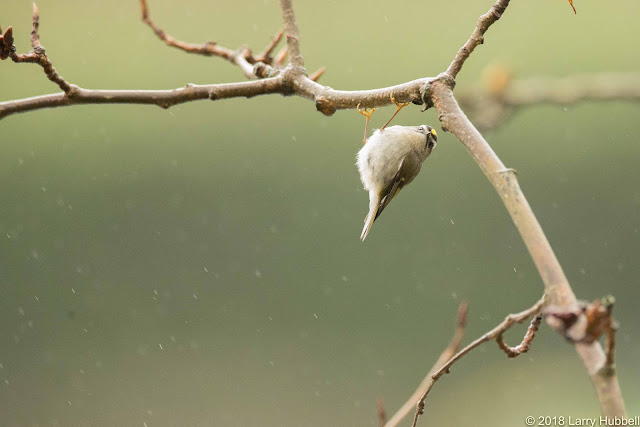 From the All-Weather perspective, Kinglets will even work in the rain. Their speedy metabolisms keep them moving and motivated. 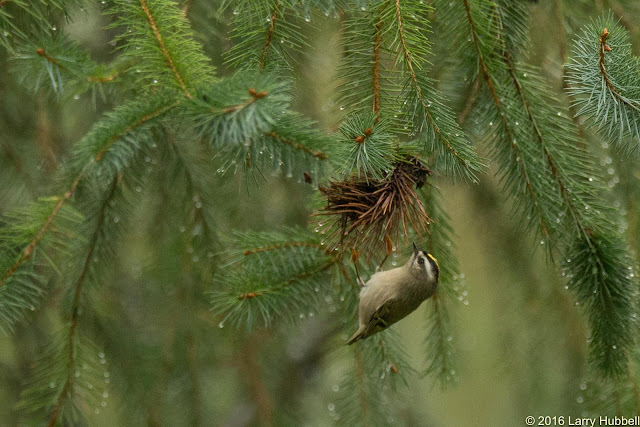 They will also keep working after the rain stops. They cannot afford to waste daylight hours. 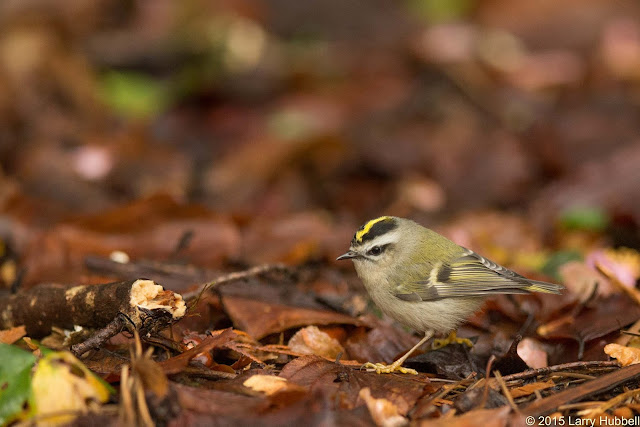 A few years ago, during especially cold weather, I noticed a Golden-crowned Kinglet reduced to spending time on the ground searching for food. 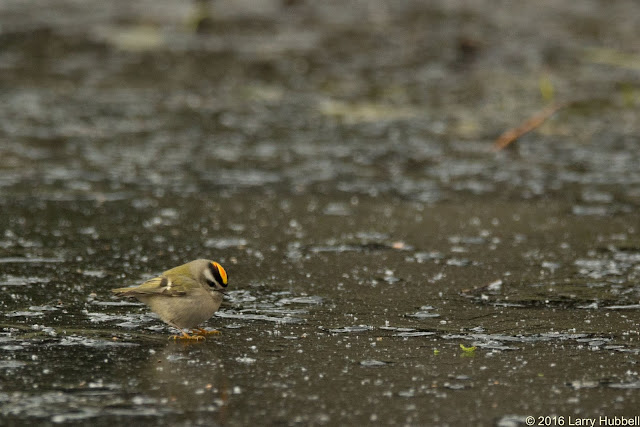 The next winter, I was even more surprised, to see one searching for food on a sheet of solid ice. 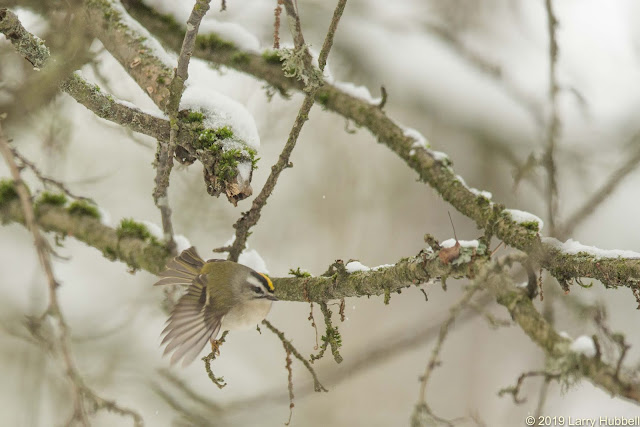 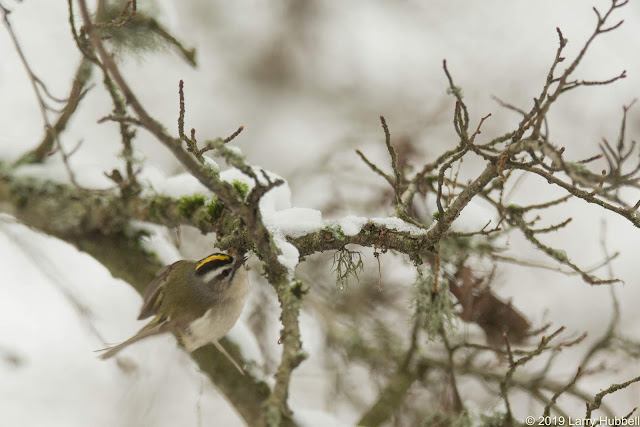 Although he was moving quickly his efforts were highly focused and productive. 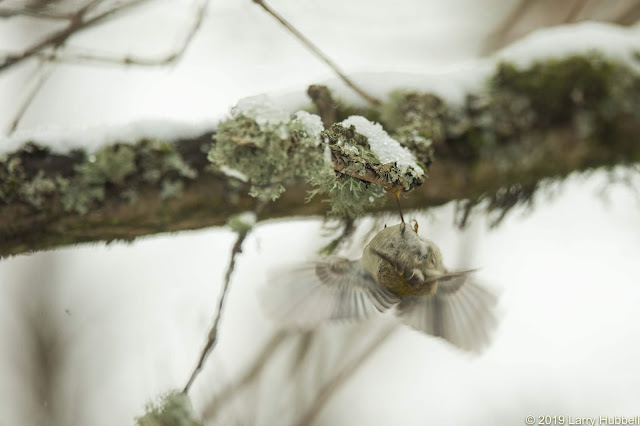 The Kinglet consistently avoided the snow by working the underside of the branches. He would hang upside down whenever possible or hover when he could not find a foothold. 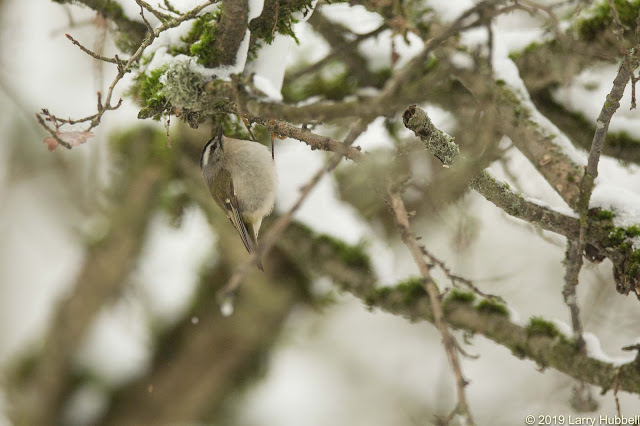 Another surprising observation, which I had not noticed in previous encounters, was how he was consistently keeping his chest feathers fluffed-out. Can you see a neck on this bird? 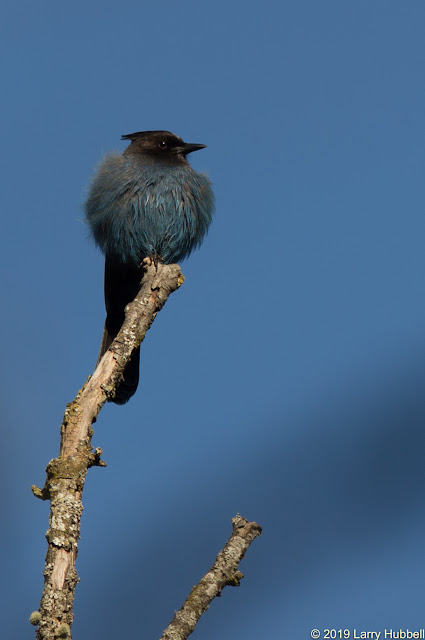 Fluffed out feathers are not terribly unusual. During cold weather other species, like this Steller's Jay, occasionally sit with their feathers extended to retain body heat. What surprised me was seeing the Kinglet in constant motion, while having its feathers extended. 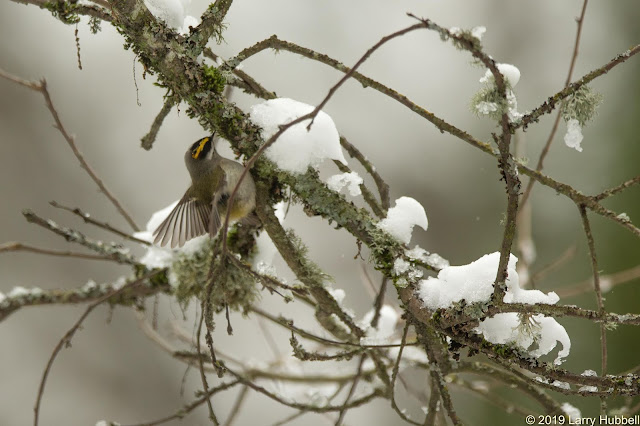 If you compare this series of snow photos with most of the earlier Golden-crowned Kinglet photos, you can see that fluffed out feathers make the little bird's body appear visibly larger. 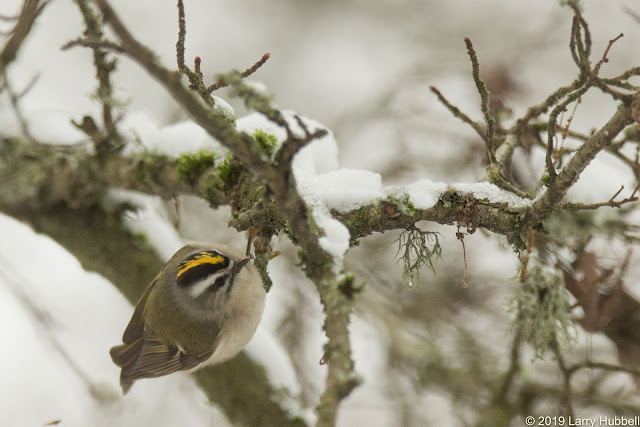 Even while eating, I believe the tiny dot at the tip of his bill is a little morsel of food, the Kinglet keeps its chest and belly feathers extended. 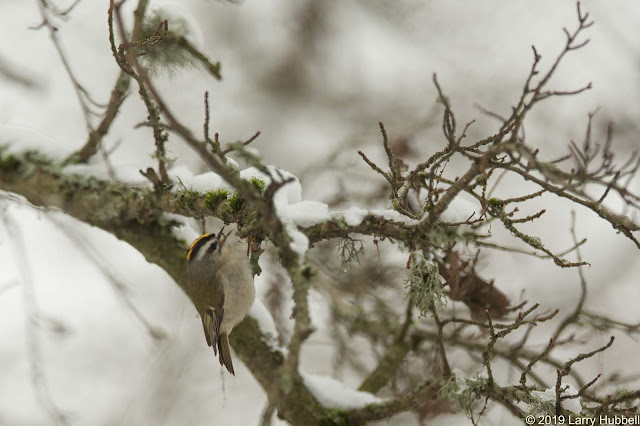 In this photo, the bite he was about to swallow looks like it has three distinct sections. Possibly, a tiny little ant. 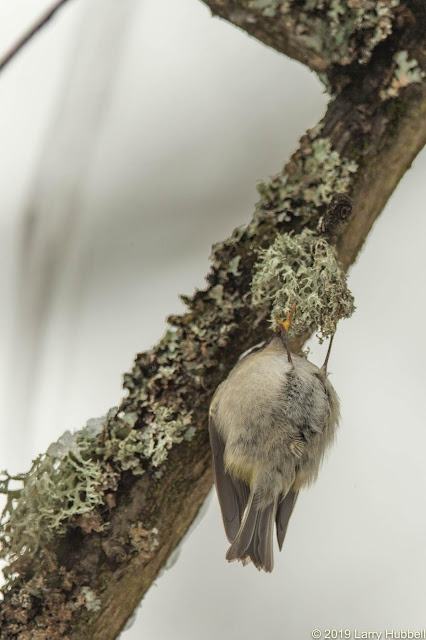 Here is another example of feathers extended, while hanging from a ball of lichen. 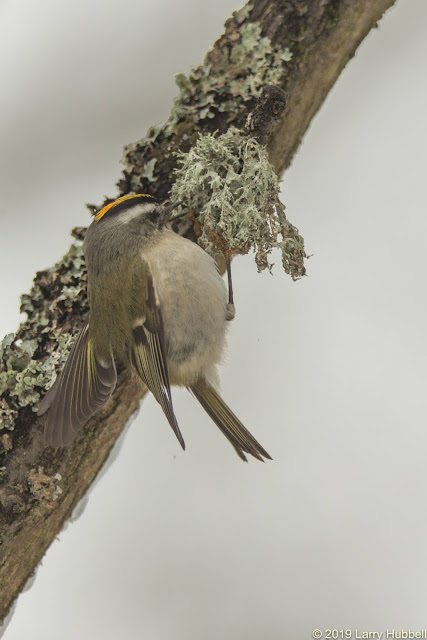 It does not take long for the lichen to start looking pretty well worked over. The slight hint of orange on his head is what caused me to conclude he was a male. 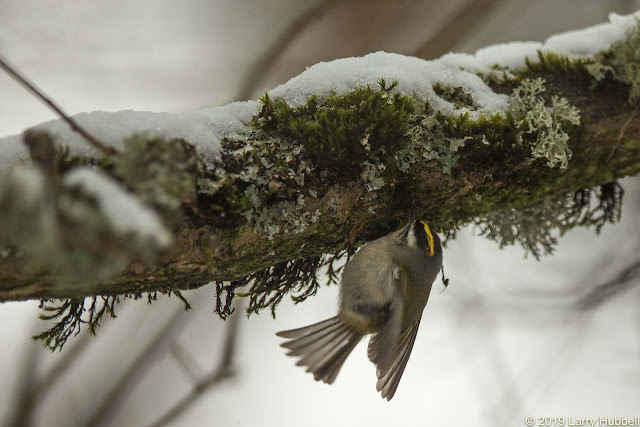 The last, and possibly most significant, reason for selecting Golden-crowned Kinglets as my All-Weather Bird species comes from the All About Birds website. 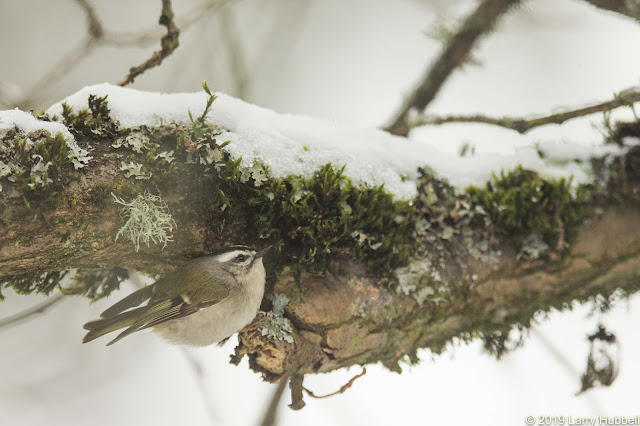 It says, 'The tiny Golden-crowned Kinglet is hardier than it looks, routinely wintering in areas where nighttime temperatures can fall below -40 degrees Fahrenheit.' This is an amazing feat. It is apparently in the range of what penguins in Antarctica endure. Click Here to read about the Guinness World Record.

A kind reader, Stephen Hauschka, sent in this link to a excellent story with lots of additional information about Golden-crowned Kinglets and their unique abilities to withstand cold weather. It is very interesting! To read it...

Have a great day on Union Bay...where nature survives in the city! 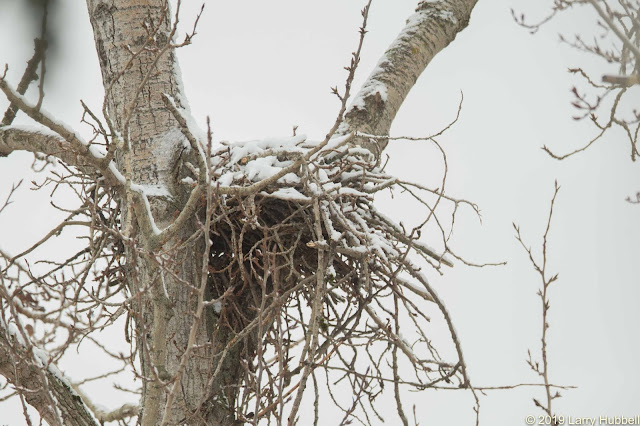 By the way, the snow on Monty and Marsha's new nest did not appear to be a problem. Primarily, Eagles only use the nest in the Spring and Summer. So, the only issue I could imagine was if the weight of the snow caused part of the nest to fall. It did not. Even so, that would have been a good stress test for their new nest.

Apparently, at the height of the nest, the wind was blowing fast enough to keep the snow from accumulating much. In the end, I saw only one apparent impact of the snow. It may have temporarily canceled out the eagle's nest-building instinct. 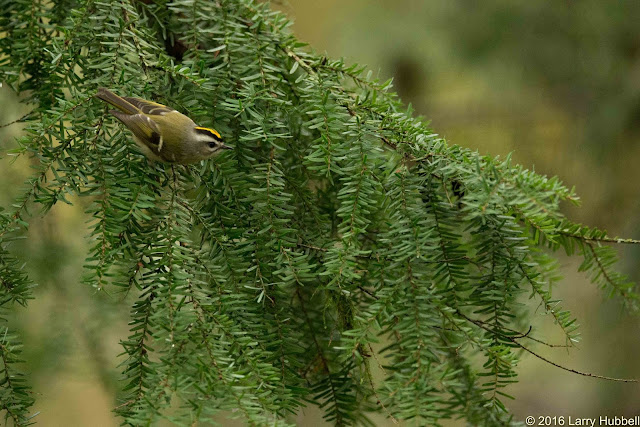 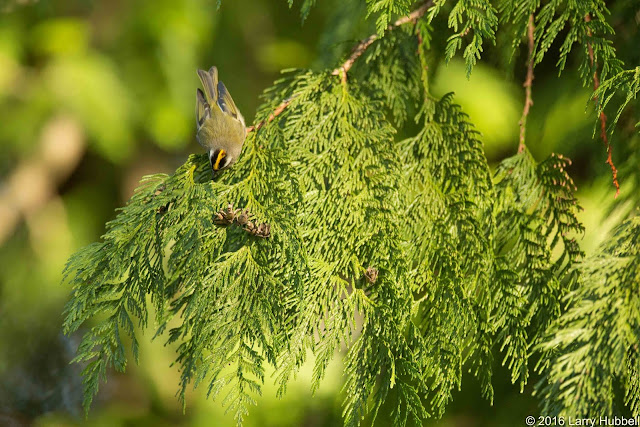 In what species of trees are these bird searching for food? Are these native trees?

Tree A) is a Western Hemlock, while tree B) is a Western Red-cedar. They are both native to Union Bay and are likely nesting trees for Golden-crowned Kinglets. Although, I have never seen one of their nests. I believe their nests are said to be located next to the trunks of the trees and hidden below the upper-most branches.