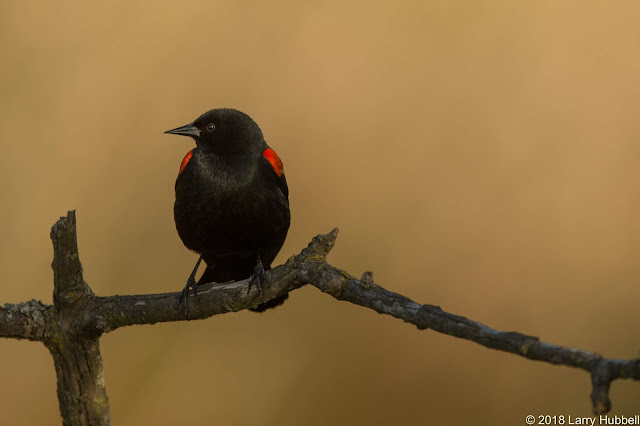 In this photo the perfect beauty of a male Red-winged Blackbird is emphasized by his exceptionally calm state.

Seeing beauty in nature is simple, as long as we leave our native neighbors a place to exist and take the time to observe them. Reading nature's more subtle signs is an unending lifelong endeavor which no one will ever complete. None the less, I hope you agree that making the effort is highly rewarding. 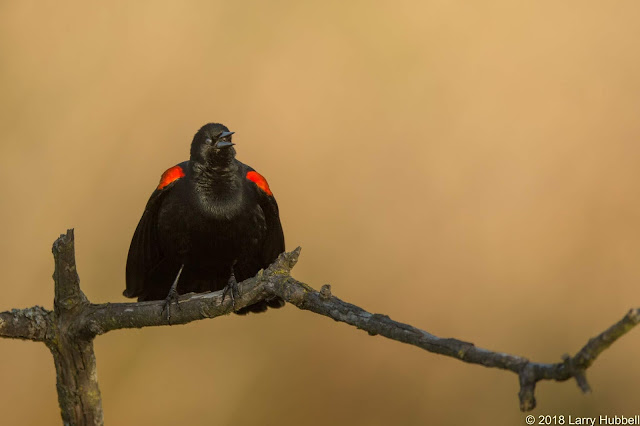 In a moment's time, the blackbird switched to vocally and visually informing the world that the marsh belonged to him. Perhaps he noticed another male getting a bit too close. Even though his feathers are all perfectly aligned the phrase 'getting his feathers ruffled' feels like a fair description of his irritated state. 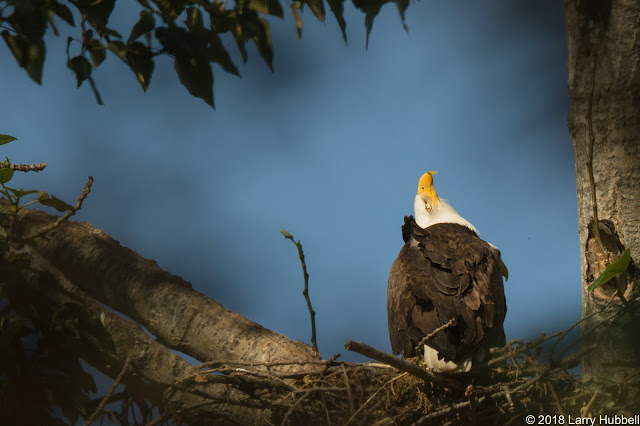 Here is Marsha, our new neighbor, in her Montlake nest. At a hundred feet in the air, it is the wind which literally ruffles her feathers, while she focuses on the crows who are the actual source of her irritation. 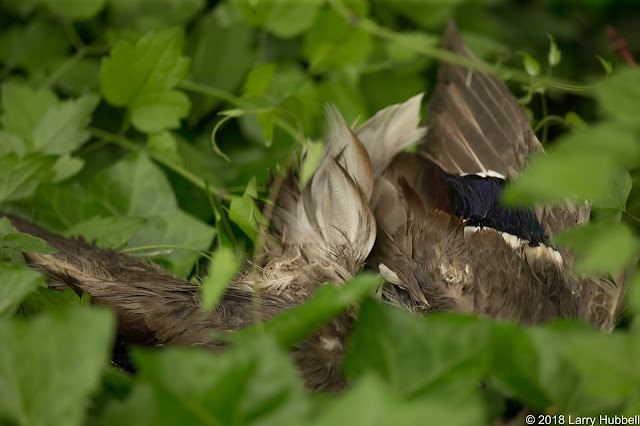 Below the nest, the ruffled wings of a Mallard indicate that Marsha, and her mate Monty, have been alternating their pescatarian diet with duck. I suspect they are also feeding young in the nest, but so far I have no proof. 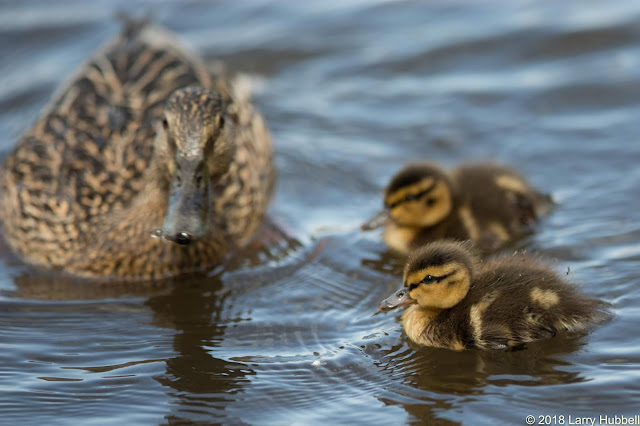 Closer to Marsh Island, a mother Mallard watched out for her two little ducklings. I only recently realized how the water flooding among the willow thickets provides habitat where the ducklings can feed, some protection from off-leash animals and visual shelter from airborne predators. The duckling's tiny feathers are not really ruffled but they are certainly in a fluffy, heat-retaining state. 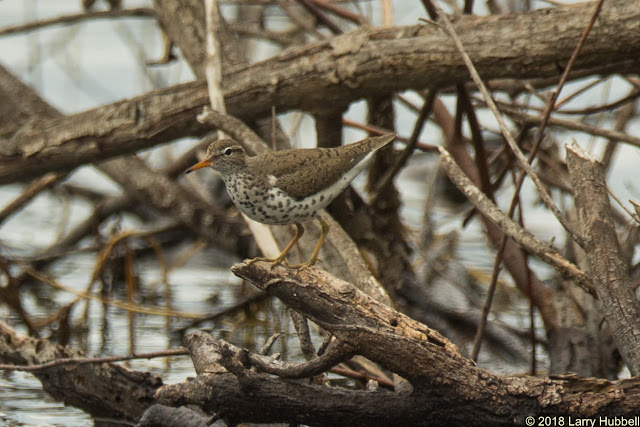 Yesterday, I returned to the same Montlake shore where I saw the young ducklings the day before. This time, I accidentally startled a Spotted Sandpiper. Without a feather out of place, the sandpiper still looked irritated enough to make me feel guilty for interrupting its muddy meal. 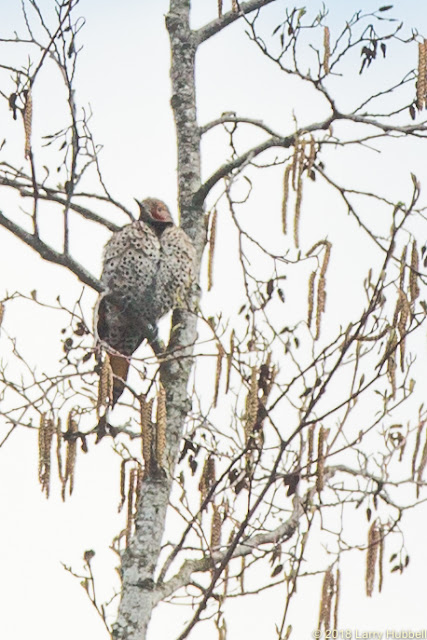 The duckling feathers reminded me of this winter photo of a Northern Flicker fluffing up to stay warm. 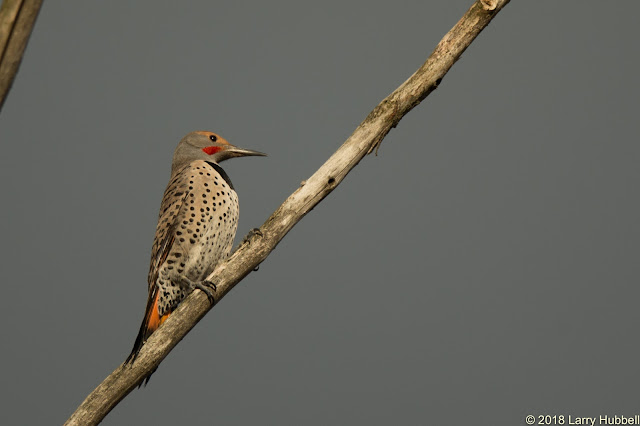 Compared to this sleek bird sitting in the sun, it is almost hard to believe that the two flickers belong to the same species. 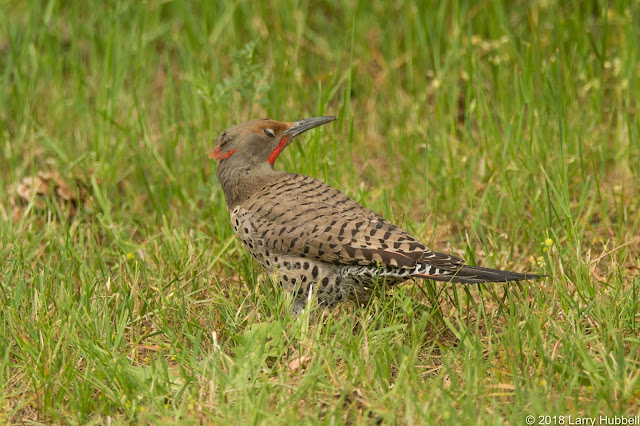 Not long ago I watched a flicker feeding in the grass in the Arboretum. The ruffled feathers on the back of its head contained at least two pieces of information. Unlike the red on its cheeks, the red on the head implies that this red-shafted Northern Flicker has inherited some genetic material from an eastern yellow-shafted relative. 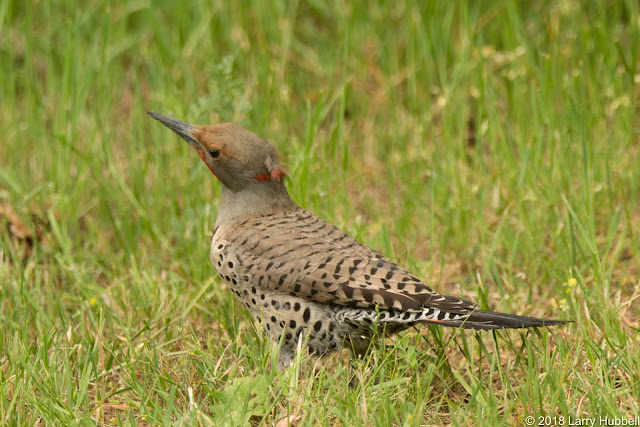 The out of place feathers also imply that the flicker has been recently rubbing its head on something, probably the upper half of a hole in a tree. This time of year the two most likely reasons for this behavior are, it has been building a new nest or it has been reaching into an existing nest to feed its young. 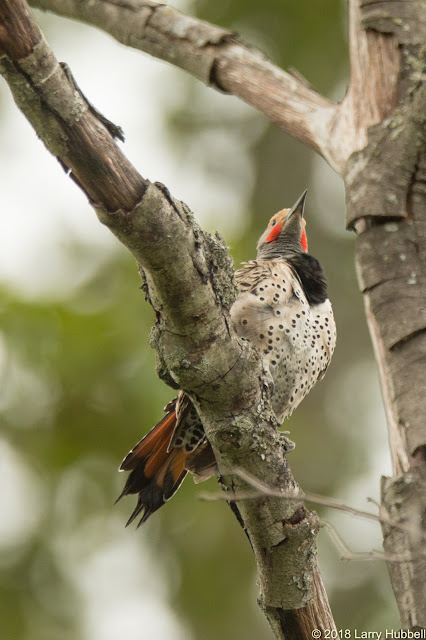 Yesterday, not far from the Spotted Sandpiper I noticed another Northern Flicker. As it looked towards Marsh Island, its feathers appeared somewhat ruffled. 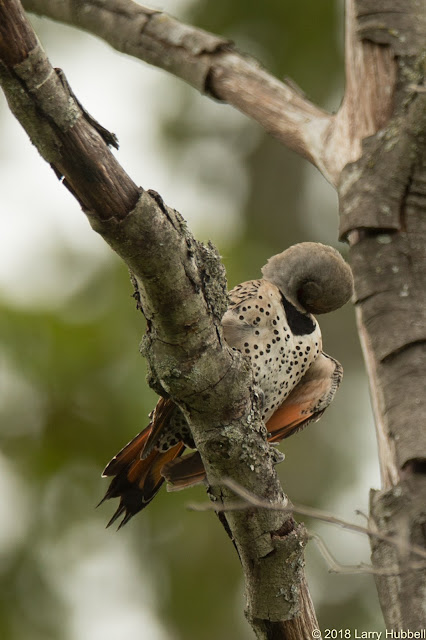 A moment later, when it returned to preening I understood the reason for the out-of-place feathers. The manner in which it twisted its head reminded me of the scroll on the handle of a violin. When I looked away the flicker flew. For a few moments, I searched my surroundings, but I could not spot it. 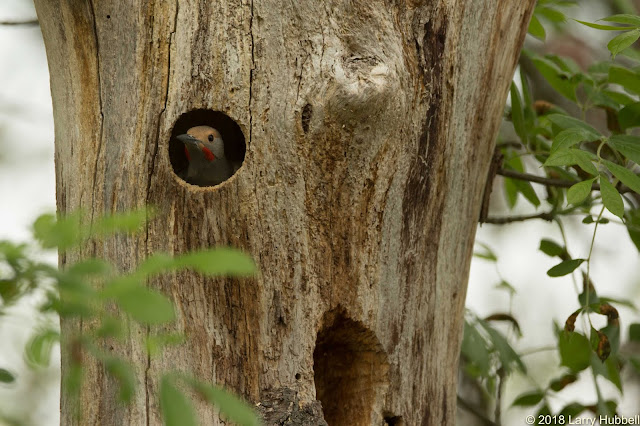 Suddenly, I was surprised to notice the flicker staring at me from inside a nearly perfect nest hole. 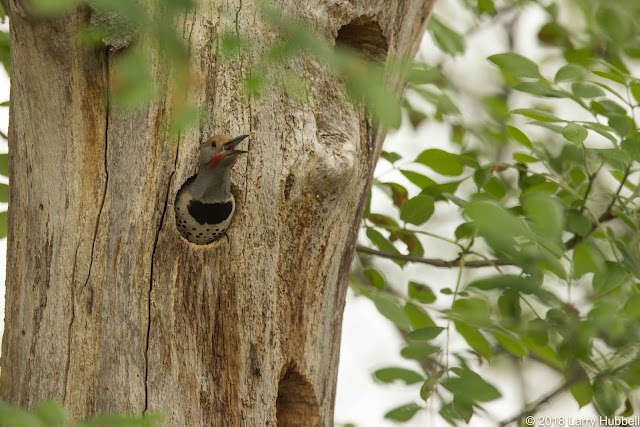 Moments later, the male bird grew very excited and vocal at the approach of its mate. 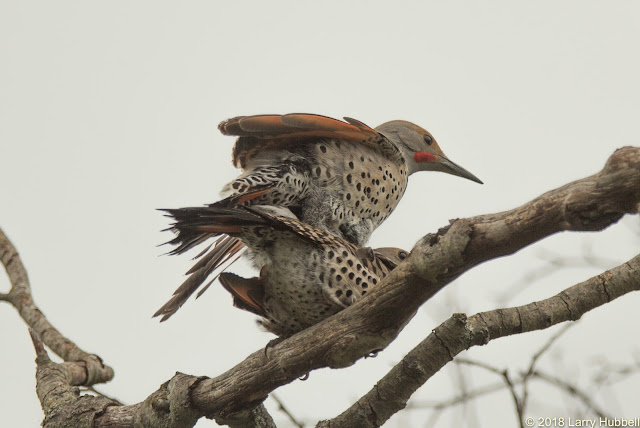 They retired to an overhead branch in an attempt to perpetuate the species. 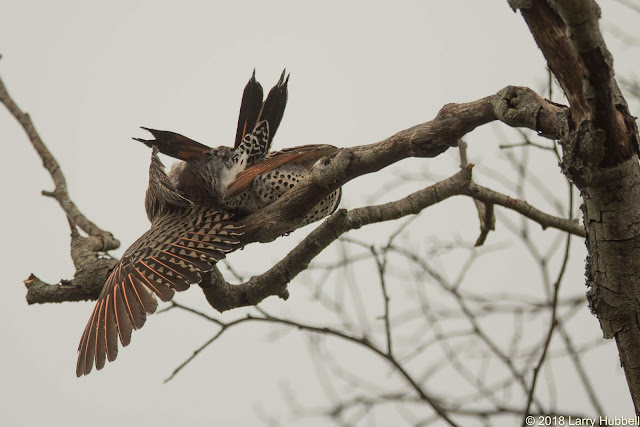 In the process, they ruffled a few feathers due to their abnormal and lengthy entanglement, which lasted a full six seconds. 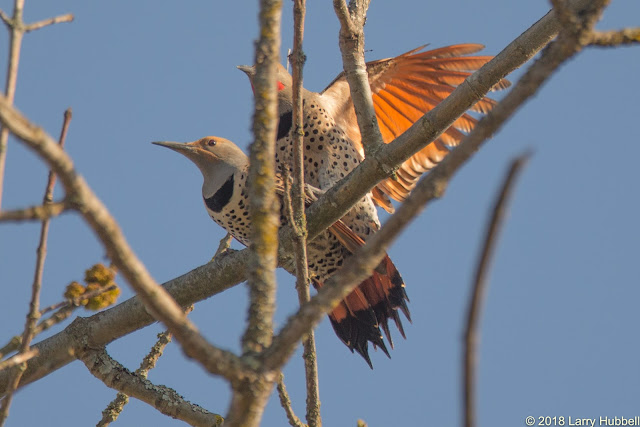 This mating in Madison Park, lasted just one second. 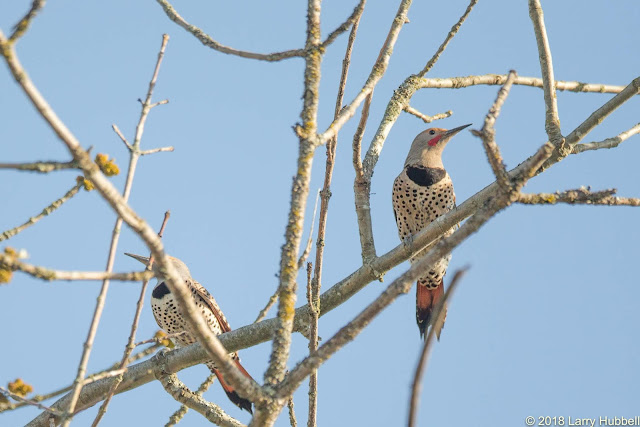 Afterwards, neither of the Madison Park birds appeared to have a single feather out of place. 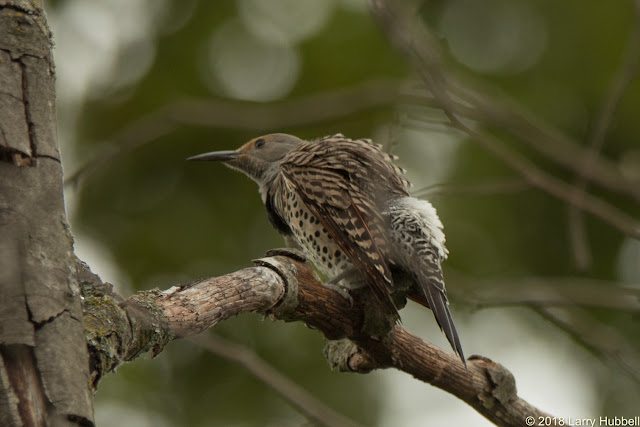 This was not the case with the Montlake female. She appeared decidedly ruffled when she relocated to a nearby branch. 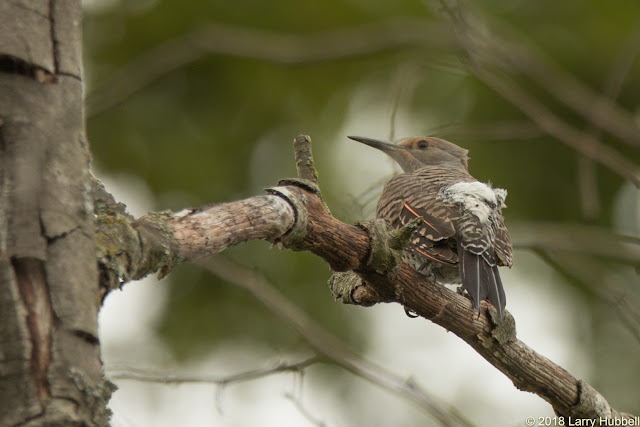 As a matter of fact, I do not ever remember seeing a Northern Flicker with such a ruffled white rump. In this brief post we have seen that ruffled feathers can indicated a variety of things, including baby making, feeding of young, cleaning, heat retention, territorial defense and even the end of life. The observation of nature is a never ending delight, with an infinite variety of possibilities and learning opportunities.

If we want similar urban opportunities for our children, we need to maintain habitat for wildlife, e.g. nature trees, wetlands, clean water, native plants and undisturbed nesting sites. Personally, I do not see human society as an alternative to nature, I believe that ultimately we will find our place as an interwoven part of a flourishing whole. 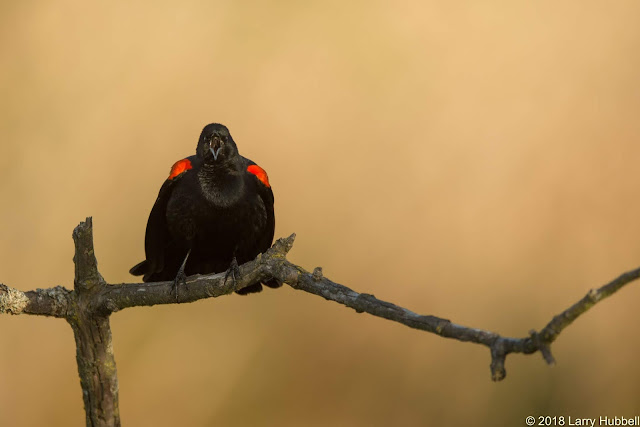 Besides, if we are not surrounded by nature, where will we go to soothe our ruffled feathers?

Have a great day in Union Bay...where nature lives in the city! 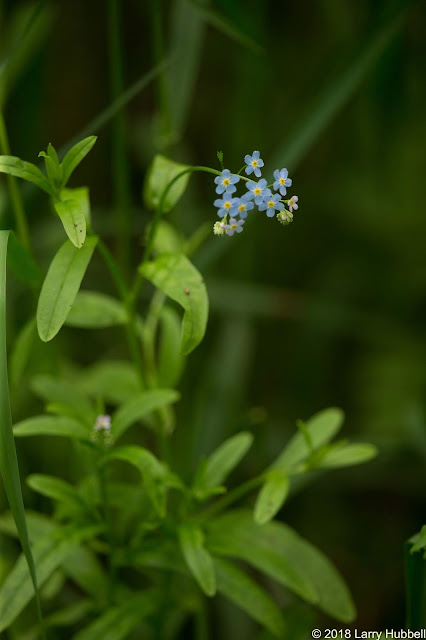 What species of plant is this? Is it native to Union Bay?


Scroll down for the answer.

Forget-Me-Not: This plant was found on Marsh Island. However, I believe it is a European plant, which most likely escaped from someones garden.

Posted by Larry Hubbell at 1:10 PM