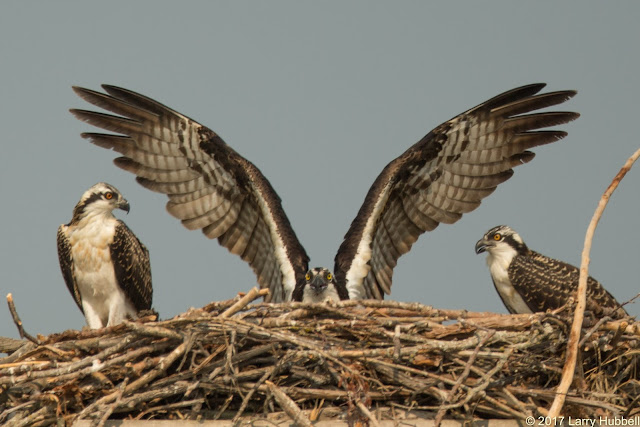 On Thursday, I was lucky enough to catch Lacey returning to the nest in the Union Bay Natural Area (UBNA). Lacey is the mother of these two young osprey who are getting close to leaving the nest for the first time. 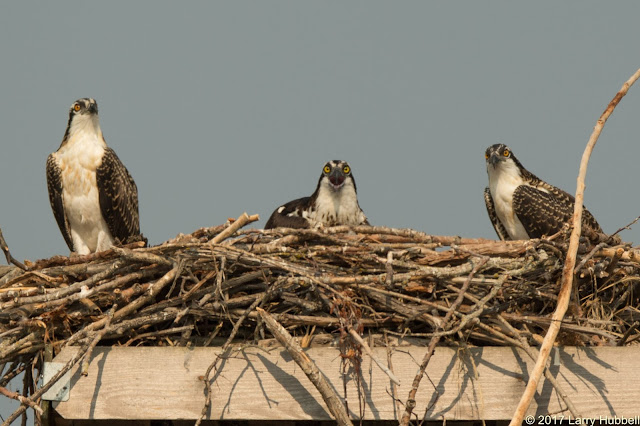 Young osprey have orange irises while adults have yellow. At a distance, the difference can be difficult to detect. 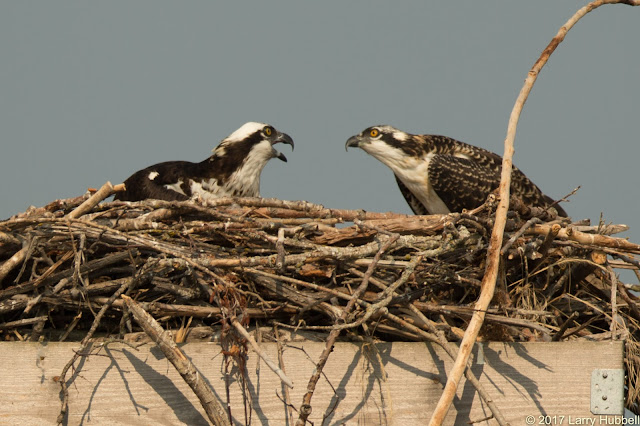 As we zoom in, you can also see that Lacey, on the left, is visibly larger. Her head and especially her beak are clearly bigger than those of her offspring. You might also notice that she, and other adults, have no pale edgings on the tips of their dark feathers.

If we desire to live in harmony with the wild creatures it is important to watch for unintended human impacts on their behavior. To do this we need to be paying close attention to what is normal for our avian neighbors. Which is part of why I like to try to get to know and identify each bird as an individual. 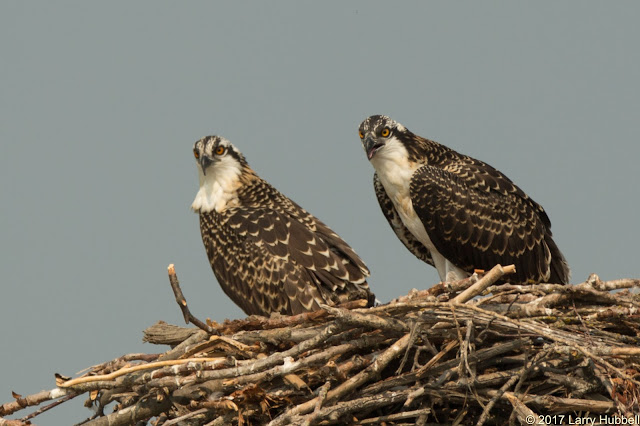 Here is a close up of our two new 2017 UBNA osprey neighbors. I am calling the bird on the left, Ash, and the one on the right, Smoke. Their names are in part inspired by all the smoke we have been getting from the British Columbia forest fires. Their coloring also plays a part in their names.

If you look closely at their foreheads you can see that Ash has a predominantly white forehead while Smoke's forehead is much darker. Kathy Hartman also noticed a couple of even more subtle differences. All of Smoke's dark feathers seem to be a deeper shade of brown and his irises may look slightly more yellow.

By the way, Kathy just wrote a very nice piece about me and harmony with nature. It is in the latest publication from the Washington Ornithological Society. To read it Click Here and then scroll down to page eight. Thank You Kathy! 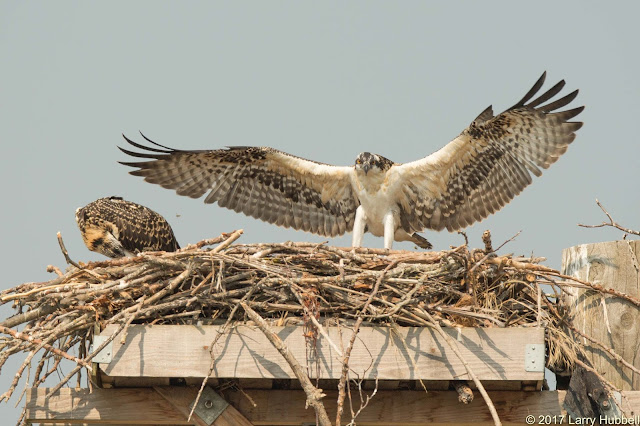 Lately the young birds have been spreading their wings and... 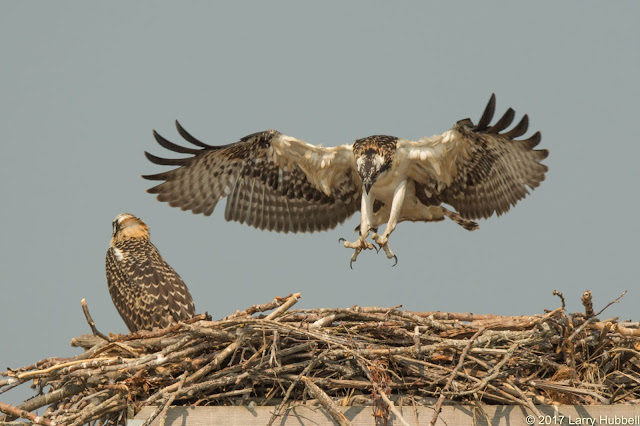 ...lifting up into the air. 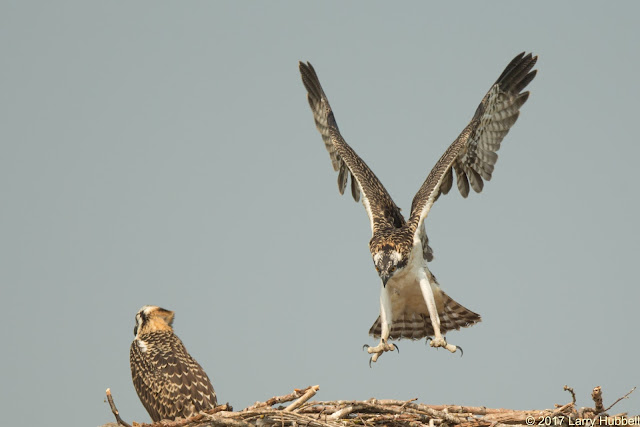 I have not actually seen them leave the nest and fly, but it could happen any time now. If my latest calculations are correct, the older one should fledge (take its first flight) within the next week. 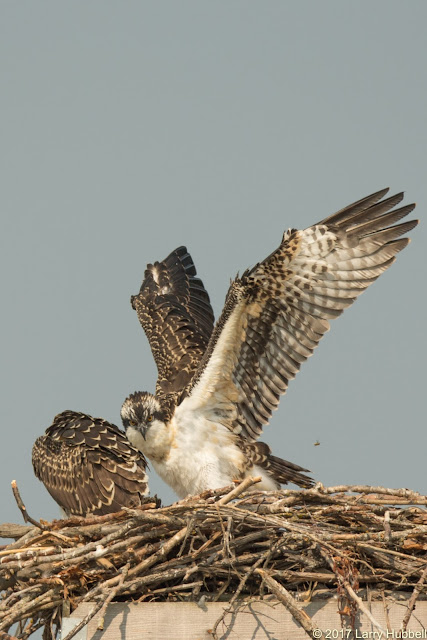 Another difference between the young and the adults is the beige or buff coloring on the young. The adults have none. You can see some of the 'buffy' coloring below Smoke's neck, on the underside of the wing and (in the previous photo) on the back of Ash's neck when the wind blows up his 'ruff'. This photo nicely exposes the underside of Smoke's primary flight feathers. The ten longest feathers at the end of each wing tend to push the osprey forward in flight while their shorter secondary feathers provide more lift. The highest points in Smoke's wings are essentially his wrists. Having the primaries attached at or after the wrists provides optimal control. Think about how much more control you would have of feathers attached to your fingers versus feathers trailing off of your forearms. 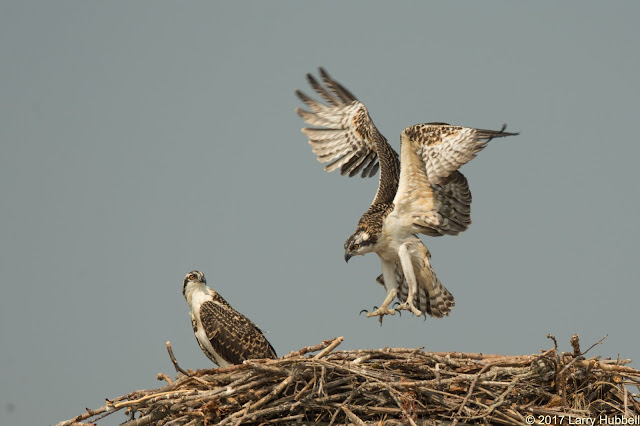 In this photo Smoke is clearly twisting his wrists and actively modifying the angle of his primaries. I suspect he is dumping air in order to settle down on the nest with finesse and control. I am assuming these two young are both male because their chests do not show much in the way of a dark necklace like their mother. In adults, the lack of a necklace generally indicates the bird is male. Among the young, the coloring is said to be a somewhat less reliable indicator. I could be wrong.

Adult female osprey can be as much as twenty percent larger than males, so we could also look for hints in their size. Although I suspect birth order may impact the size of the young, as much or more than gender. 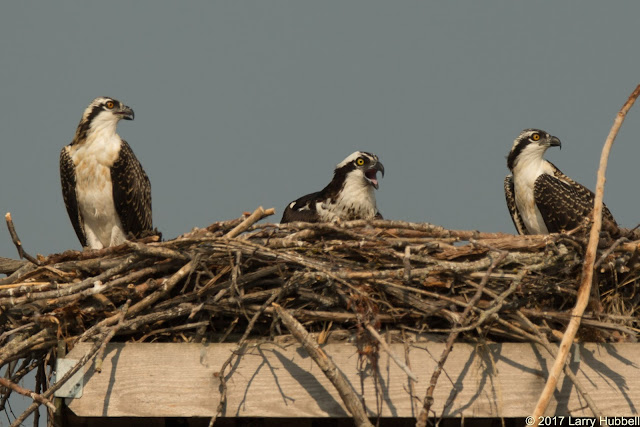 It was obvious that Lacey settled into the nest with a particular goal in mind. When excited or nervous, Lacey becomes quite verbal. Her calling normally indicates the approach of a potential predator or the return of her mate, Chester. 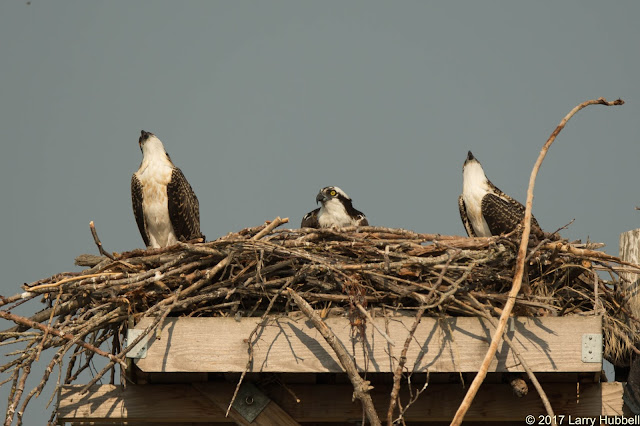 The young are developing a healthy interest in the world around them, and they were obviously concerned about who was approaching the nest. 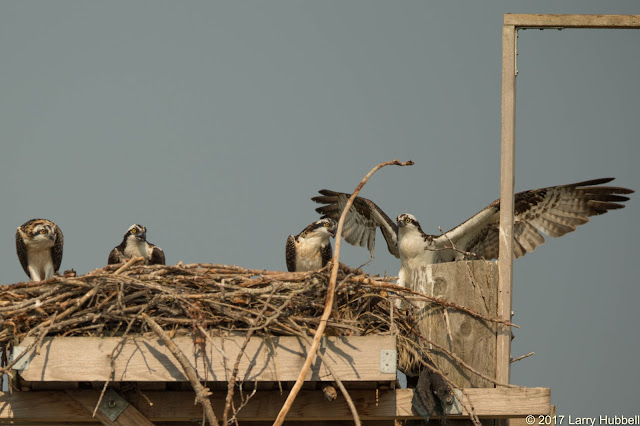 Luckily this time it was their father Chester, coming in with a fish. 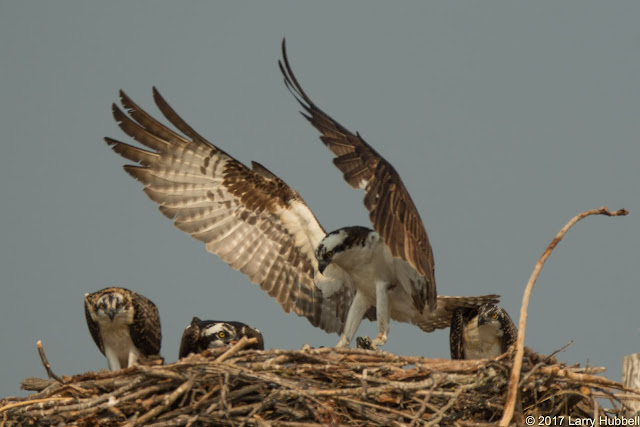 Although Chester is smaller than Lacey, nobody wants a wing in the face so everybody ducks.

This photo also shows how the osprey's flight feathers are mostly dark on the upper side and mostly barred on the underside. The exceptions are the last 3 or 4 primaries, P7 through P10, which become progressively darker on the underside. The book 'Bird Feathers' by Scott and McFarland says, 'Melanin (which makes feathers dark in color) is also associated with keratin, which provides structural integrity.' This seems logical given how useful the last few primaries are in controlling flight, gliding and landing. 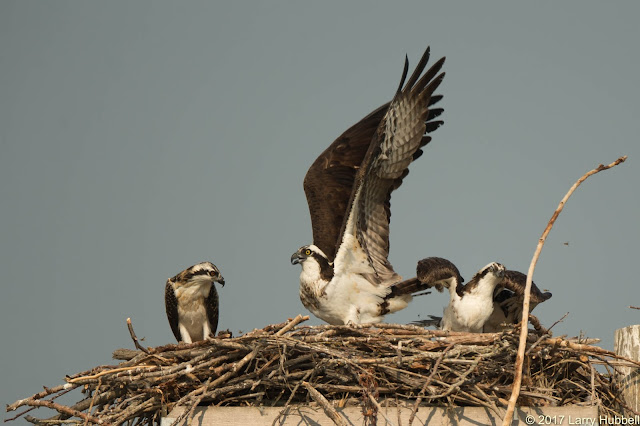 No sooner did Chester land in the nest with the fish than Lacey picked it up. 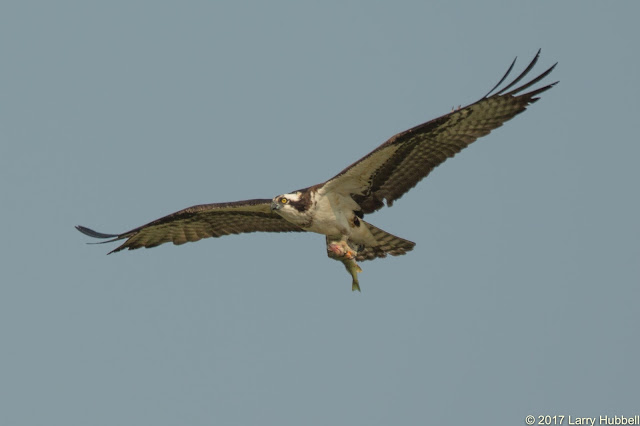 Lacey was evidently aware that everyone else in the nest was well fed. None of them voiced any objections as she retired to a nearby cottonwood for a late breakfast of Union Bay sushi.

Here you can see her leading primaries are stretched apart like fingers as she glides. My understanding is that the separate 'fingers' break up the air into a number of small individual vortexes. The result is less drag and more lift. I suspect as airplanes become more sophisticated we will see similar adaptations. 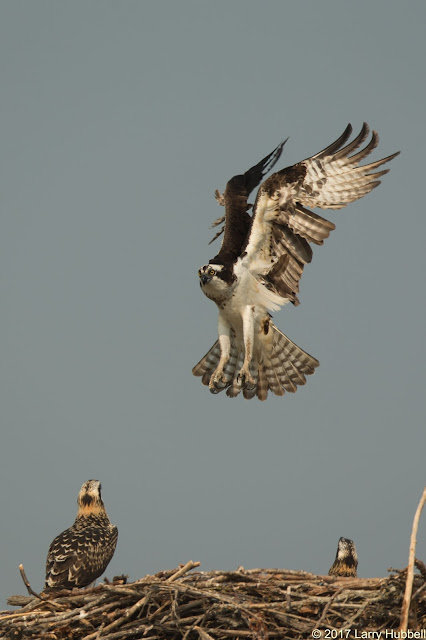 After eating, Lacey came back and seemed to consider landing in the nest. Notice how she used her tail to slow her progress. In addition, her wing feathers are all askew. No doubt this reduced lift, as the feathers were not aligned and all working toward a common goal. 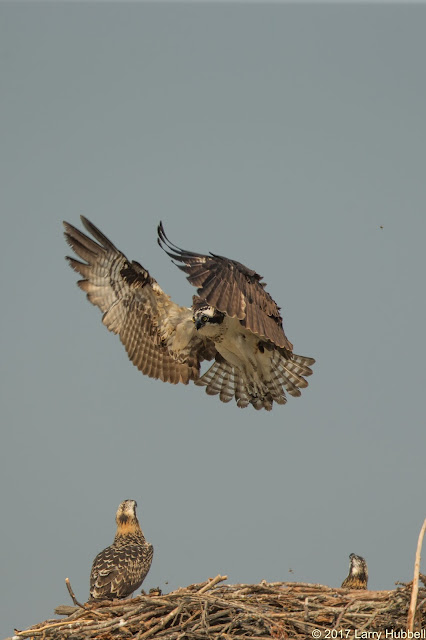 At the last moment she apparently changed her mind. 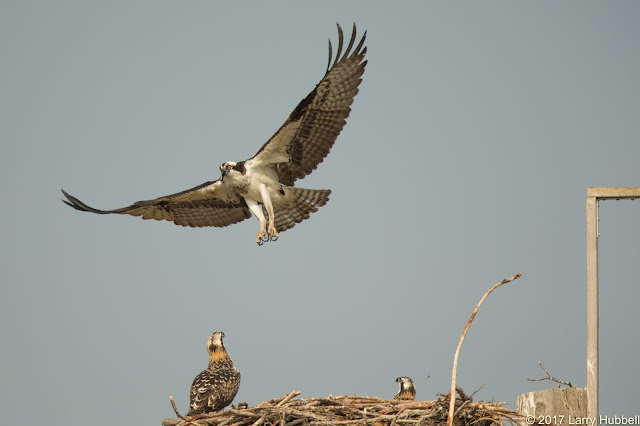 A split second later her feathers were perfectly aligned and working together. Lacey lifted back up into the sky and returned to her cottonwood roost where she could watch the nest from a short distance away.

I remember someone who passed by wondering if Lacey was behaving like the mother of young children who occasionally locks herself in the bathroom for a moment or two of peace and quiet. Parenting is demanding, regardless of your species. 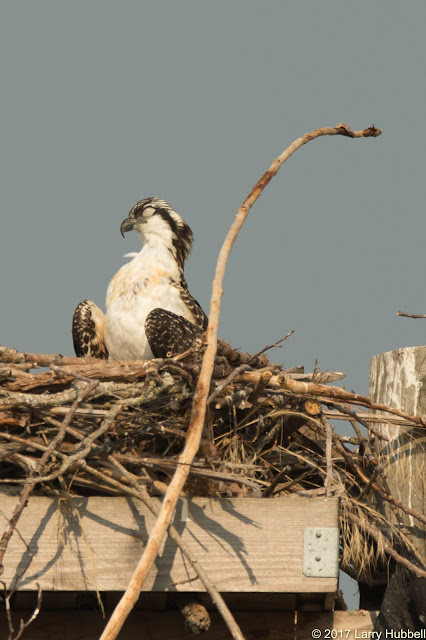 In parting, here is a photo of Smoke snoozing in the morning sun. I wonder if there is a logical reason why osprey have white eyelids? Shelley, my wife, suggests that maybe the white eyelids make it look like they have their eyes open even when they are sleeping.

If you would like to see one of the earliest 'baby' photos of Smoke or Ash following This Link and look toward the end of the post. The photo from Doug Parrot shows one of the very young birds. Look closely - just below Lacey's neck.

Have a great day on Union Bay...where young osprey are once again preparing to fly!

PS: Here is a fun link to a video which Bill Albert sent in. It shows an osprey diving into Portage Bay for a fish. It could very well be Chester! Click Here to see Bill's video. 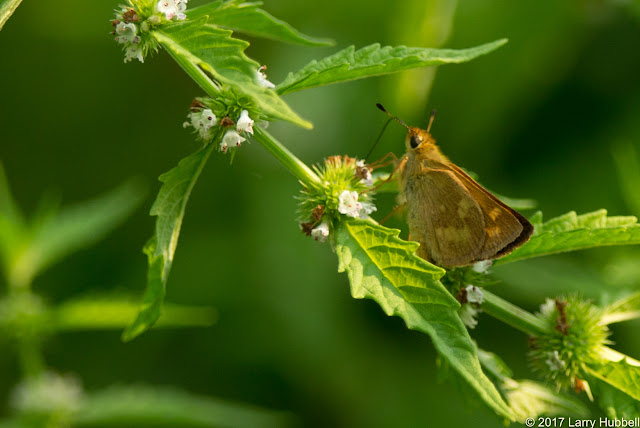 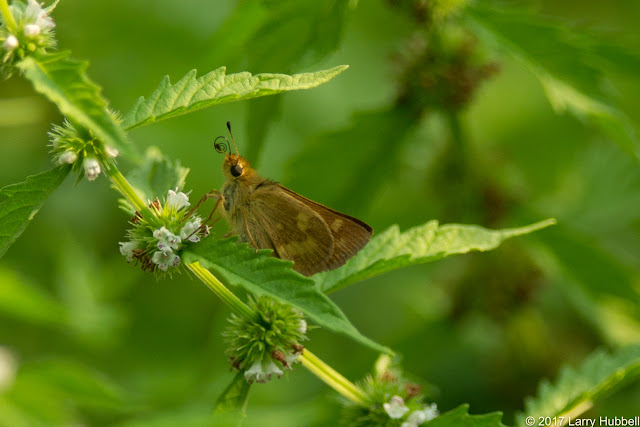 I am hoping that this week we can reverse roles. Can anyone tell me whether this creature is a native or not? In the first photo, and in many others I took, this insect uses its proboscis to dip into multiple tiny flowers. In the last photo it rolls up its proboscis into a very artistic swirl. Given that moths and insects are not part of my expertise I am hoping someone will tell me whether this in a native creature and if possible maybe even identify it. Thank you in advance for any help you are able to provide.

Posted by Larry Hubbell at 1:57 PM