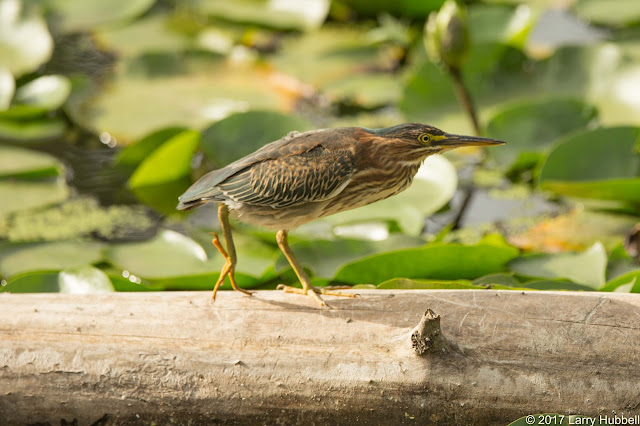 When I cross the bridge to the south end of Foster Island, I always slow down and look to my left across the open expanse of water, lily pads and fallen trees. Like a magnet to my mind, the opportunity to see nature in action turns my head, snares my attention and brings my feet to a stop. The sounds of the city fade. Yesterday and tomorrow evaporate. As my focus falls into nature my breathing slows and deepens. A sense of peace and well-being floods my soul. 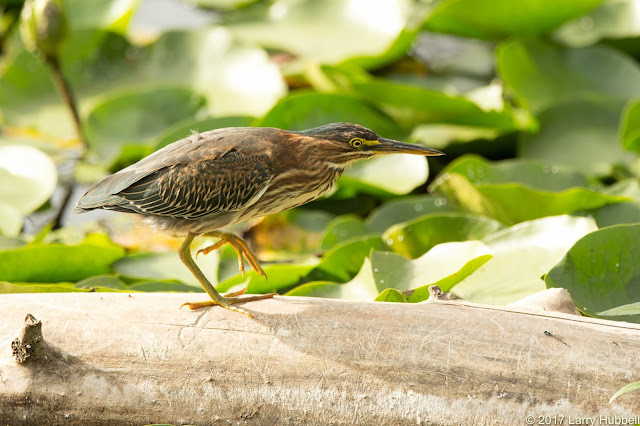 On Wednesday, as I scanned across the lily pads, I was distracted by a slow deliberate movement, directly in front of me. A green heron paced along a floating log lying parallel to the bridge. I silently scrambled to assemble my camera. I wondered how long the bird would remain. Runners constantly cross the bridge while boaters frequently pass beneath. Green herons, while not uncommon, can be extremely shy. 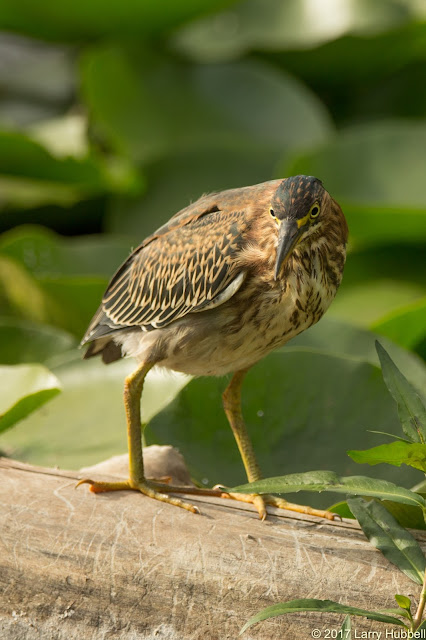 Moments later, a kayaker passed below the bridge and flushed the heron. 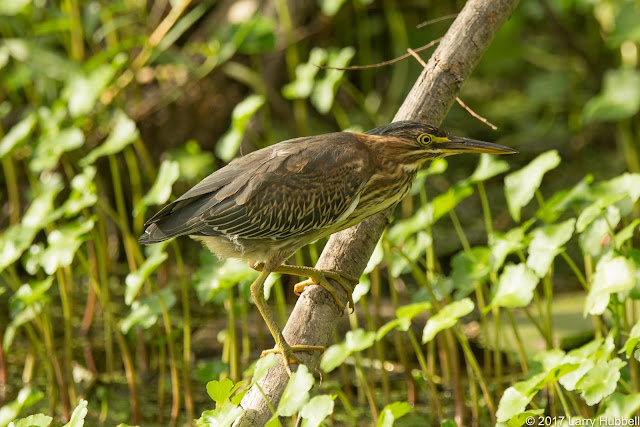 Surprisingly, as the oblivious boater paddled away, the little heron landed close by.

Green herons weigh less than half a pound. Ten of them together would weigh less than one of their great blue cousins. Green herons are listed as being about a foot and a half long. While this might be technically correct, they generally appear much smaller. Their necks basically disappear when they are folded into their normal 'S' shape. I doubt the distance from the tip of the tail to the end of the bill is not much more than a foot, in a green heron's normal pose.

You can see some less common green heron poses in this prior post, Green Heron Yoga. 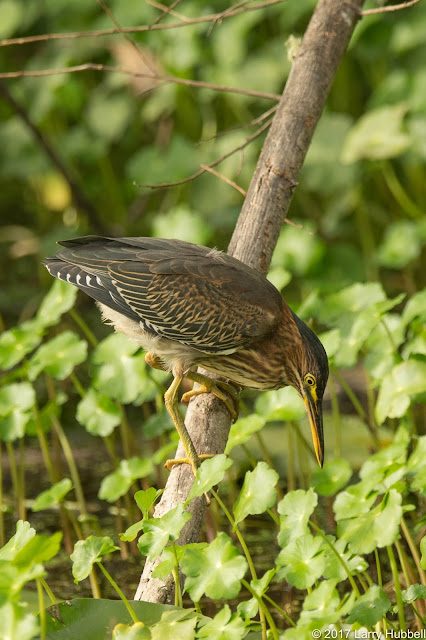 After about five minutes, the heron finally settled in and began focusing on finding food. 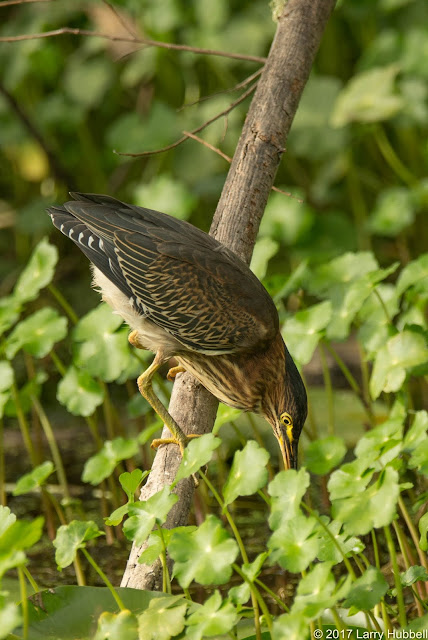 At a glacial pace, the heron leaned forward and began to extend its secret weapon. 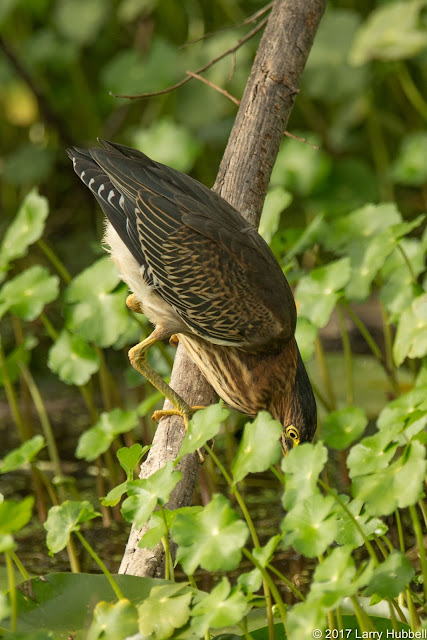 The heron must have spent more than two minutes slowly, imperceptibly extending its neck and moving its head closer to the unsuspecting fish. 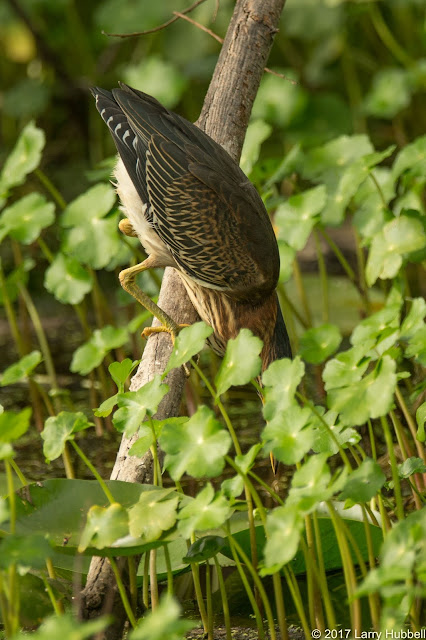 Without moving its feet or legs, the deadly bill moved all the way down to the surface of the water. In a flash, the beak burst through and snatched a little fish. The tip of the bill is visible in the middle of the diamond-shaped opening below the leaves which hide the heron's head.
You can see a different and unique green heron hunting technique is this prior post, Learning To Fish. 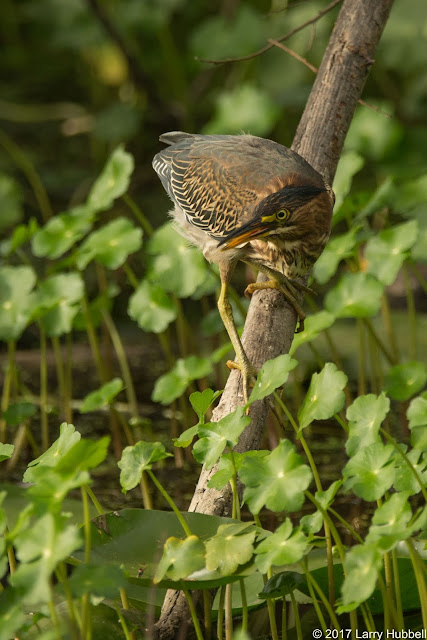 After swiftly swallowing the appetizer, the heron silently turned and began the process again. 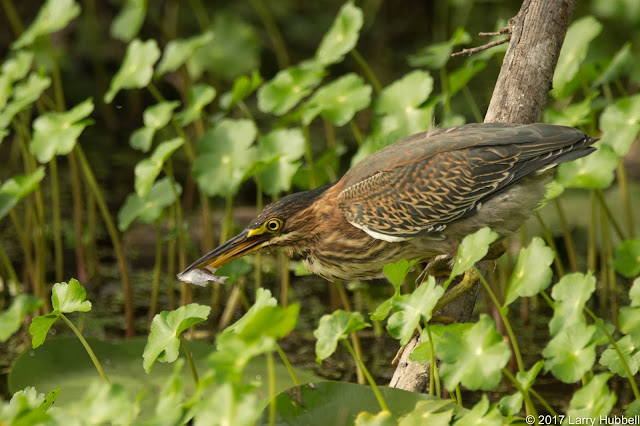 This time I caught a photo of the fish before it began its last convoluted journey down the telescopic neck. The heron caught three of these little fish in rapid succession. 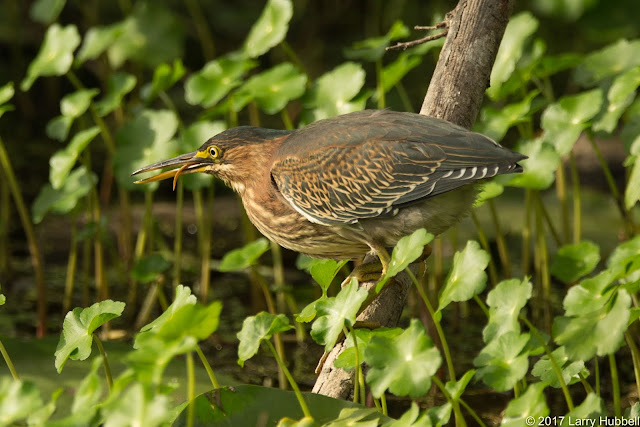 The hungry little heron 'licks its lips' and prepares for the main course. 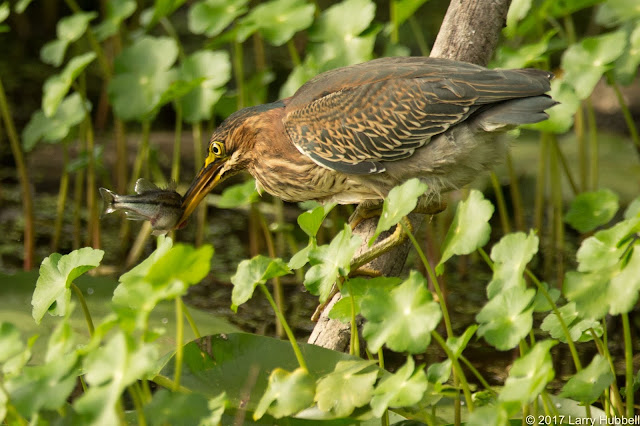 This time the heron actually speared the fish with its upper mandible. 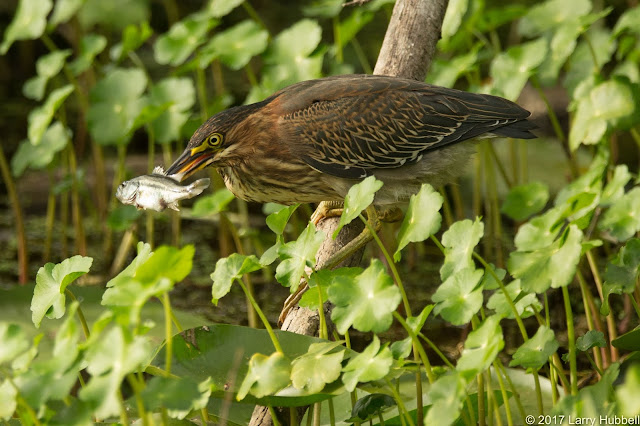 Based on the arrangement of the fins I am thinking this fish might be a smallmouth bass. I have seen bass as long as eighteen inches caught near Foster island (with a rod and reel) but I do believe this is the largest fish I have ever seen a green heron catch. 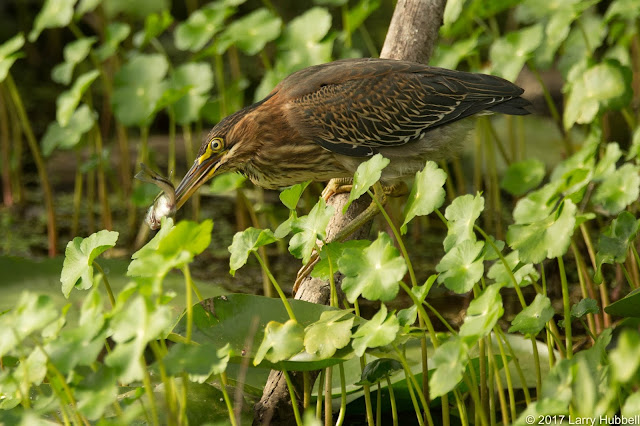 It is also the first time I have seen a green heron spear its prey. Great blue herons will often walk to the shore and remove speared fish on land, so the fish cannot easily escape while the heron is preparing to consume it. This green heron seemed a bit dumbfounded. I wondered if spearing the fish might have been a first for the heron as well. We can tell this is a young, less-experienced bird because the side of the neck is streaked. 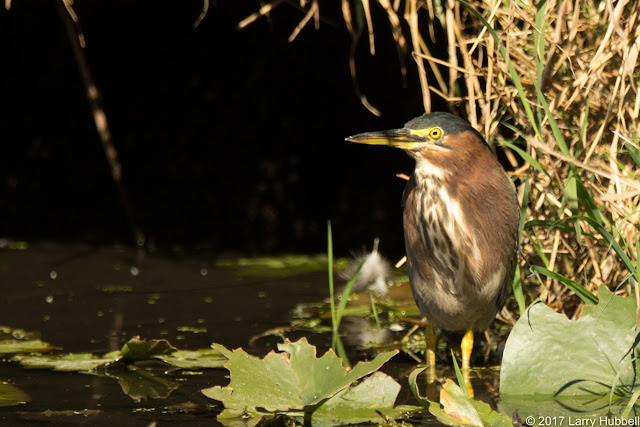 More mature green heron's, like this bird photographed last fall, have much more of a solid chestnut-red coloring on the sides of the neck. 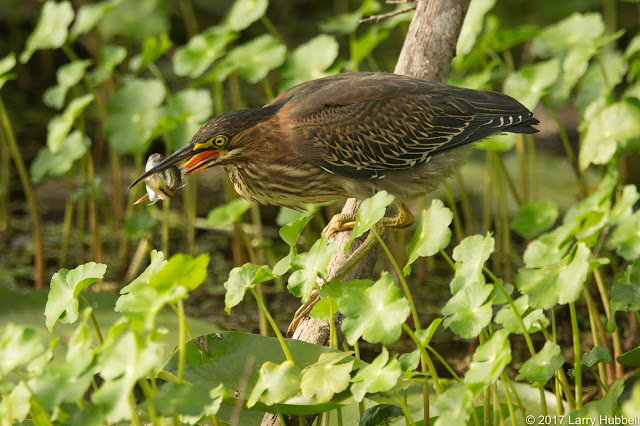 After spending a couple of minutes twisting and turning about on its perch, and moving the fish up and down, the heron finally found a way to withdraw its bill and grasp the fish in a more helpful arrangement, without setting it down. 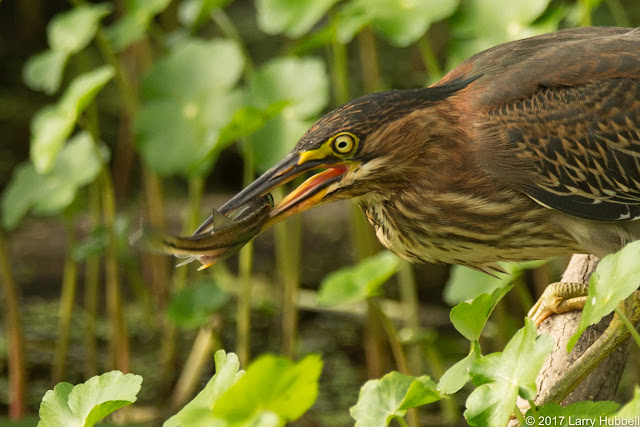 It only took a moment or two more to reposition the fish in the usual head-first fashion. In addition to its other stripes and streaks, this bird also has little brown streaks on the 'cap' on top of its head. If you glance back at the mature bird you will see its cap is far more consistently colored.

Curiously, there appears to be some debate about what these marking indicate. In Birds of North America (citation below) I found the following comments, 'Bent and Oberholser described (juvenile) females as differing from males in having chestnut streaks on the crown,...Very few examples of sexual dimorphism in Juvenile plumage exist. Therefore, further studies should evaluate the validity of this purported early sexual dimorphism.'

Apparently, our young green heron may be a female. 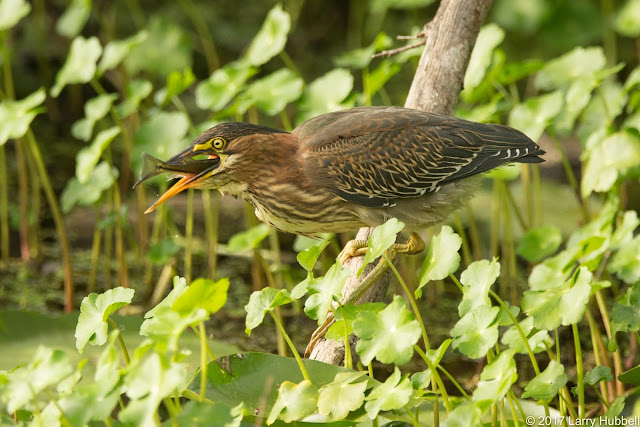 Another curious thing is the manner in which the pupil of the heron contracts as it prepares to swallow the fish. Contraction should result in less light entering the eye. It almost seems to me as if the bird is attempting to ignore visual input while it focuses on the important task of swallowing the fish. 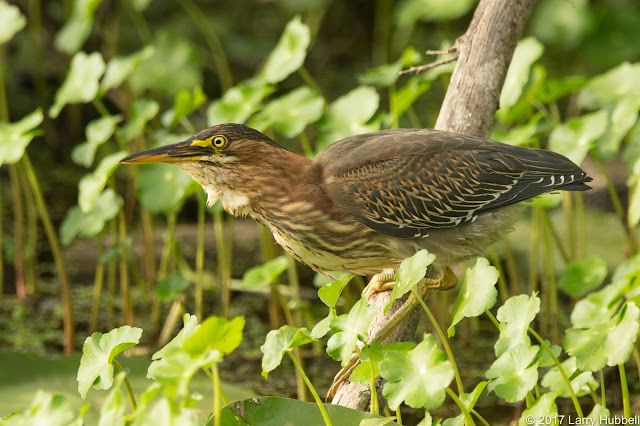 This time the neck expands in width, as opposed to length, as the fish passes through. 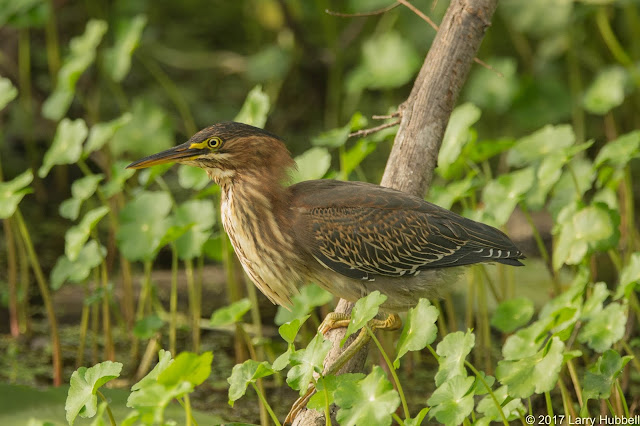 Through the camera I could see the neck twitching as the fish tried to resist its descent into darkness. 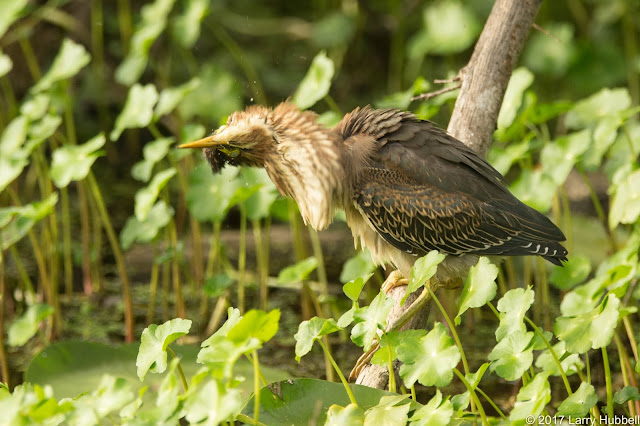 Afterwords, the heron shook its head only once. I was not positive whether this was just an attempt to remove water or a means of helping the fish along its way. 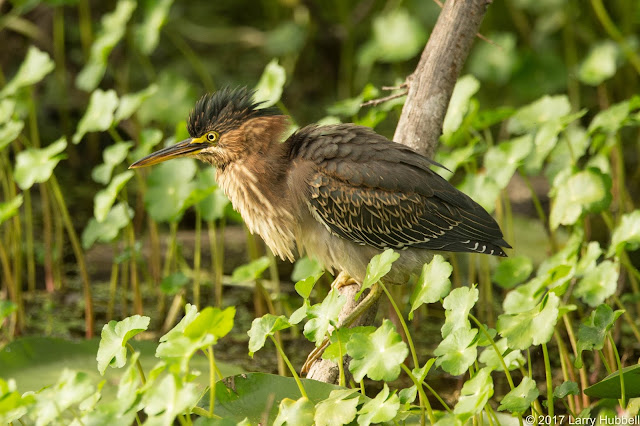 The erection of the crest reminded me of how I lift my eyebrows and open my eyes when I swallow something large. I suspect our shared behaviors with our fellow creatures are far more extensive than we know. 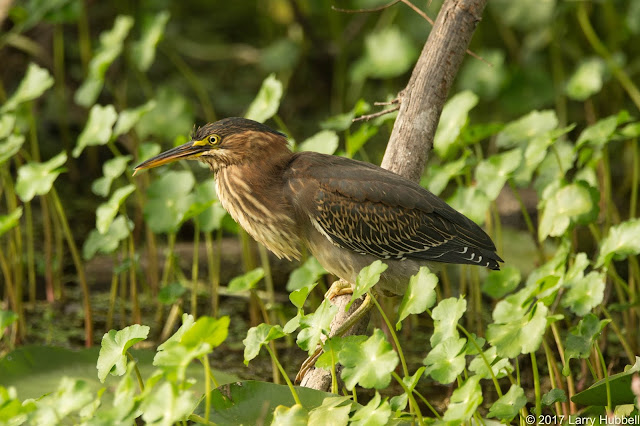 A moment later, the crest is reclined and the heron begins the slow process of digestion. I watched the bird for another half an hour. It remained in the same location even as I left. 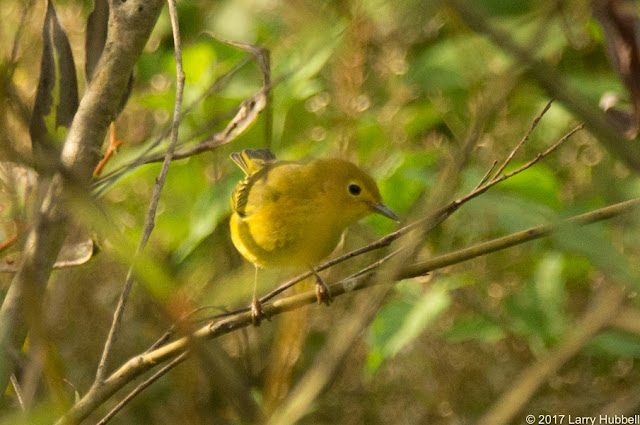 While watching the green heron this little yellow bird passed swiftly through the branches of a near by willow tree. Can you identify the bird?


This is a female yellow warbler. It is native to North America in the summer, but generally winters in Central and South America. 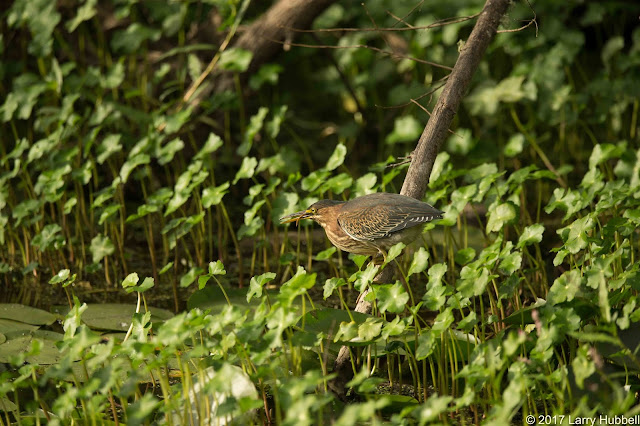 By the way, can anyone tell me what type of green aquatic plant surrounds the heron through out this post? Someone passing by suggested that it might be watercress but it does not look similar to the photos I find online. I have not found anything like it the aquatic section of my normal reference, 'Plants of the Pacific Northwest Coast'.

Posted by Larry Hubbell at 1:22 PM