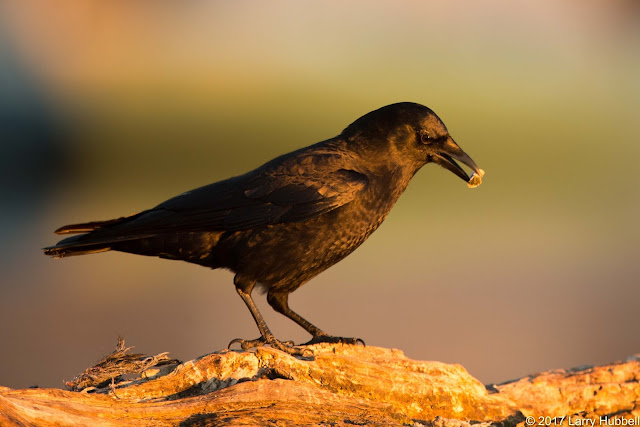 In January I spotted this crow evaluating what looked like a piece of bone. I firmly believe crows will eat anything - as long as the item in question provides a remote hint of sustenance. 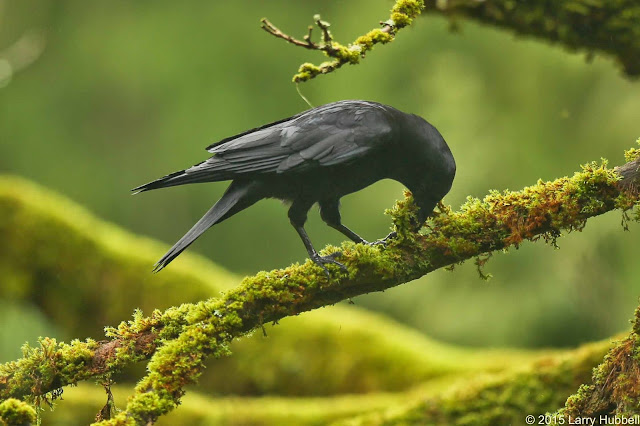 In the winter, they will dig under moss-covered branches looking for grubs or larva or anything that moves. 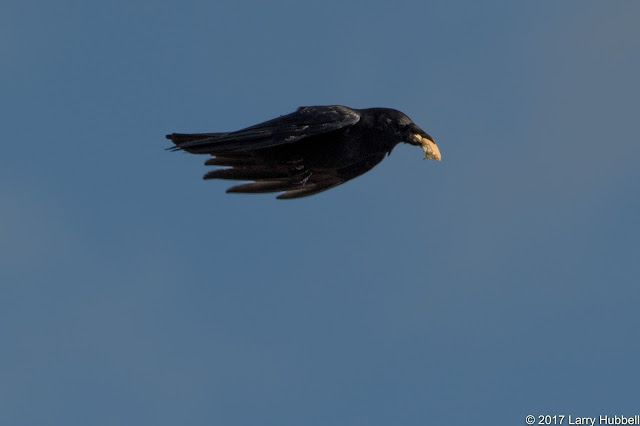 Anytime of year, they will search our garbage and will even steal bread from the ducks when small children attempt to feed waterfowl. 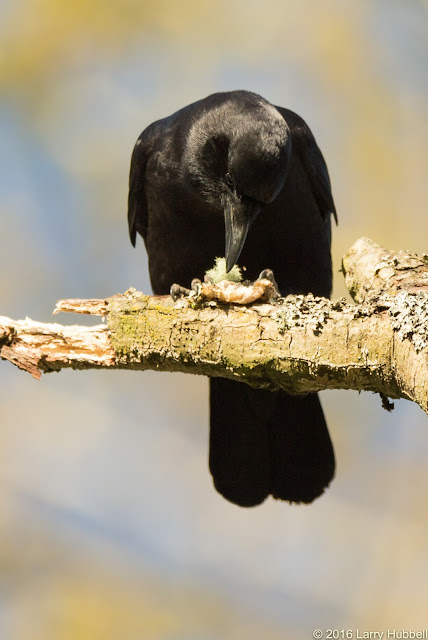 They will eat unidentifiable things. I suspect sometimes even they have no clue what they are eating. 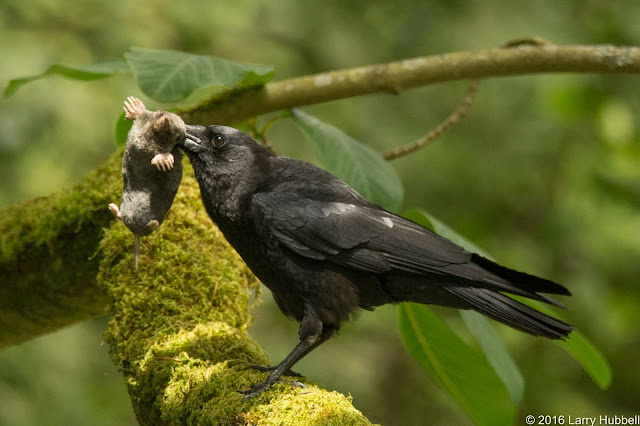 Last year, I watched a crow pick up the body of a mole. At the time I had no idea how tough a mole's coat could be. I watched the crow twist, turn and stab at the body for almost seven minutes. The mole's fur was still unblemished when the crow carried it away. 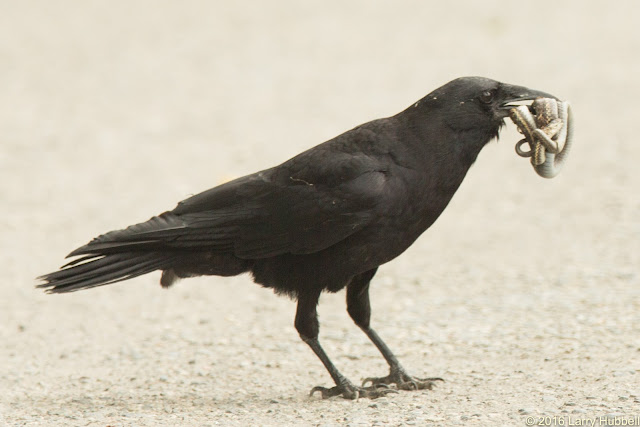 Later, I watched a crow wrap a snake's body in its beak. Apparently, this was to reduce the swinging and sway in flight. 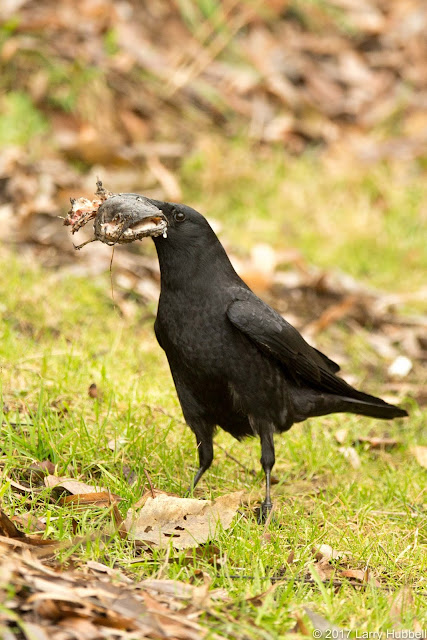 I have even seen a crow with a bottom fish, which must have been captured and brought to the surface by some other creature. 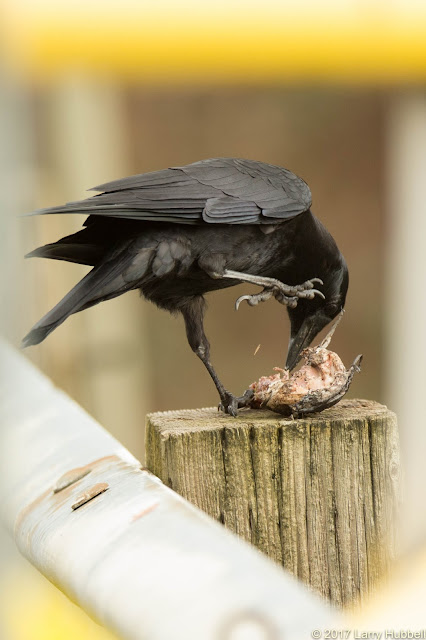 Still, if you are a hungry crow, second-hand sushi sounds delightful 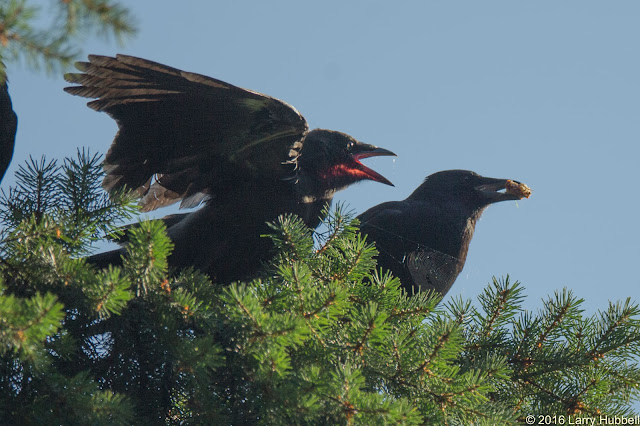 Young, hungry crows must learn the family creed at an early age. They consume whatever their parents provide. This photo was taken in July of last year at which point the young crow was as large as its parents, but still begging for food. The youngster's gape, the red area around its mouth, must have seemed like a bottomless pit to the parents. 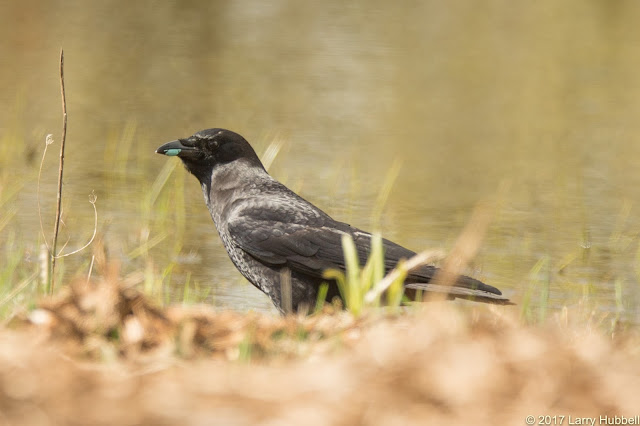 This spring, I watched a crow with the fragment of a robin's shell still stuck to its beak. In addition to eggs, it seems like almost every year I hear about crows stealing young from the nest's of robins. 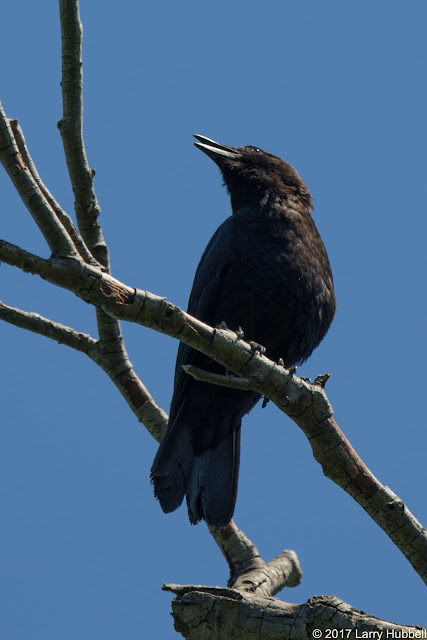 Last week I watched this crow lurking on a branch just slightly above a downy woodpecker's nest. 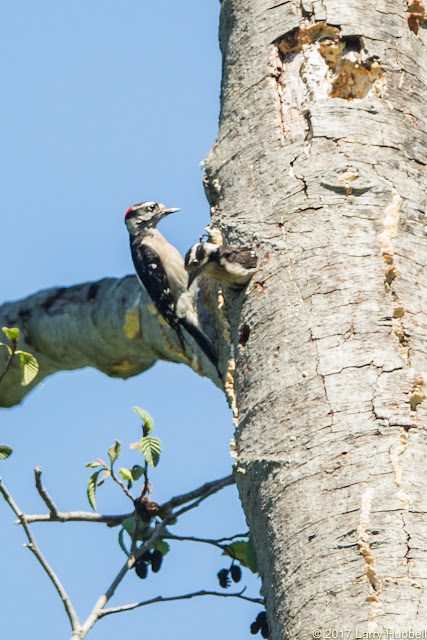 The tiny woodpeckers had been coming and going with great regularity.  With each trip they carried food inside for their young. I am not sure if a crow could actually reach inside and raid a downy's tiny nest. Still, I do get uneasy when it appears they might be considering the task. When the crow arrived, the trips stopped and the male downy remained in the nest with the young. 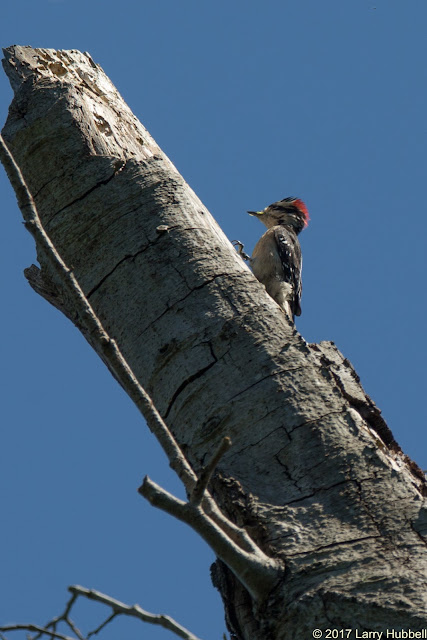 Imagine my surprise, and the crow's, when after a few minutes the downy male emerged from the nest with his mini-red-crest fully inflated. The little woodpecker hopped up to the top of the tree and then fired off the pinnacle, diving directly at the dumbfounded crow. It all happened far faster than I could record. But there was no doubt about the result. The crow decided he had somewhere else to be. The brave little downy returned to the young in the nest. 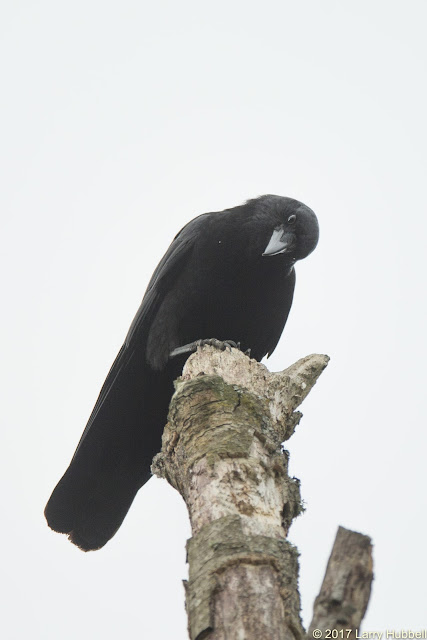 Yesterday I again watched a crow sitting above another downy nest. 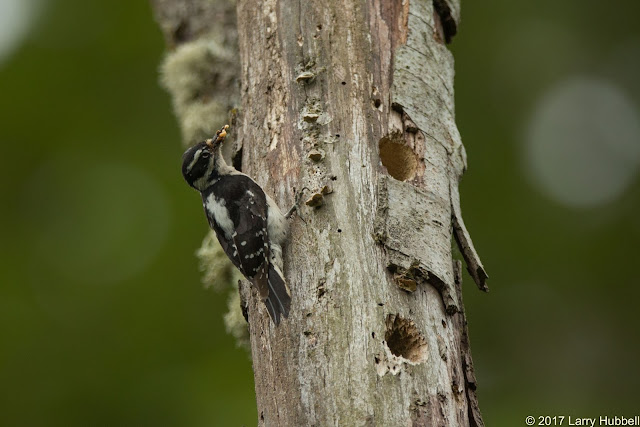 I saw both the mother and... 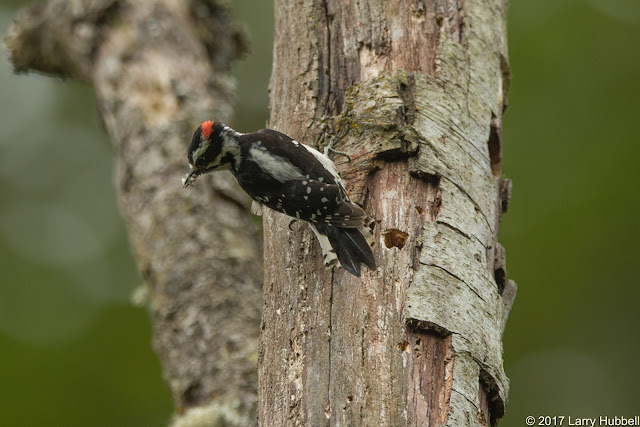 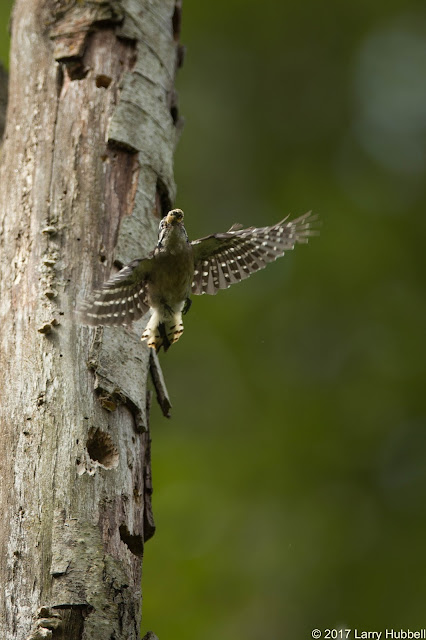 I even watched as the father dutifully kept the nest clean by removing a relatively large fecal pouch. This time the curious crow flew off without an incident.

The two downy nests are quite close and crows are quite smart. Could this have been the same crow I watched last week? If so, could the crow have learned a lesson from his experience? If not, could a different crow have heard the rumor - harassing a downy is like playing with fire. 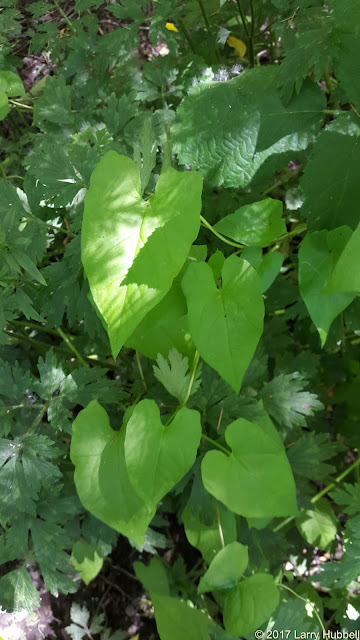 There are two types of bindweed mentioned on the King County website. Neither one is native to the Pacific Northwest. This particular type has infested the area south of Elderberry Island in the Arboretum and is also in my garden at home. Because of the lighter leaf color I suspect this is the perennial Hedge Bindweed, also called Morning Glory. If you happen to know more about these plants than I do, please feel free to educate me. (ldhubbell@comcast.net)

I do know the plant is a real pain. It grows up and around other plants, like our strawberries, and when you try and remove it - it 'binds' around the stem causing you to inadvertantly pull off perfect good strawberry leaves and berries before the bindweed breaks. In addition if you leave any part of the bindweed in the ground it sends out new shoots and starts growing again. Between this plant, the creeping buttercup (covered last week) and the himalayan blackberries the native understory is virtually gone near the mouth of Arboretum Creek.

Posted by Larry Hubbell at 1:08 PM