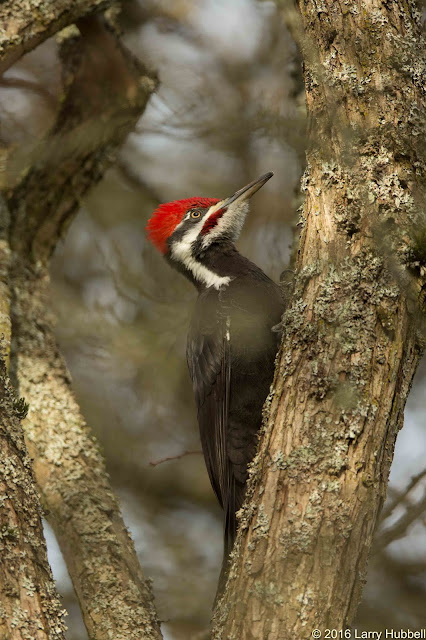 For me, the most challenging part of writing is finding the start of the story. 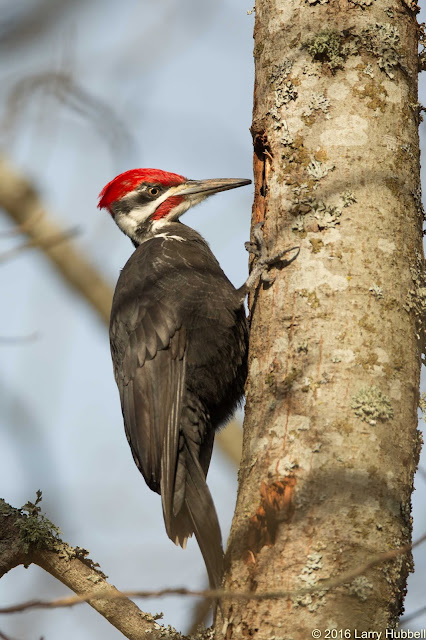 My mind bounces from one moment to the next, from one creature to the next, from one plot to the next. Nature is never simple. The more I see around Union Bay the harder it is to snip-out short, concise pictorials. Since I only experience one moment at a time, you would think it would be easy. Each interaction with nature might seem discrete and complete - like  little round beads following one after the other on a string. In reality, each creature I observe and all of their experiences are interconnected by multiple threads, webs and links. Nature is massively complex, highly interwoven and vastly beyond my ability to comprehend. 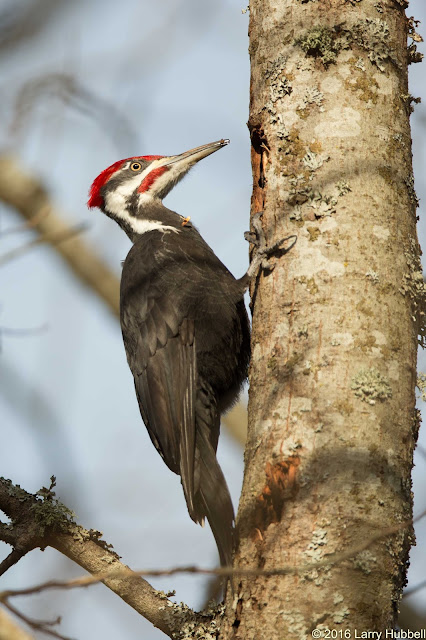 On Friday as I stepped out from under the new 520 construction on Foster Island, my eye was attracted by a streak of black and white, flashing from one tree to the next. My pulse quickened as I followed the flight of the pileated woodpecker. He landed in a small tree in front of me and began excavating. Moments later, he was interrupted by the noise and shadow of a crow passing over. 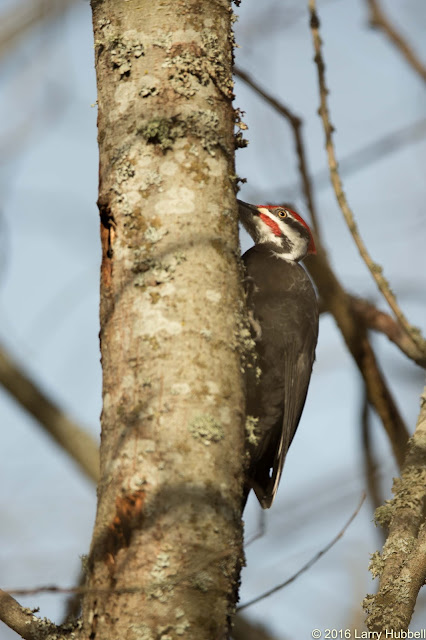 In a flash, the pileated did a 180 around the tree. I wondered if the woodpecker viewed the crow as a threat or a warning. 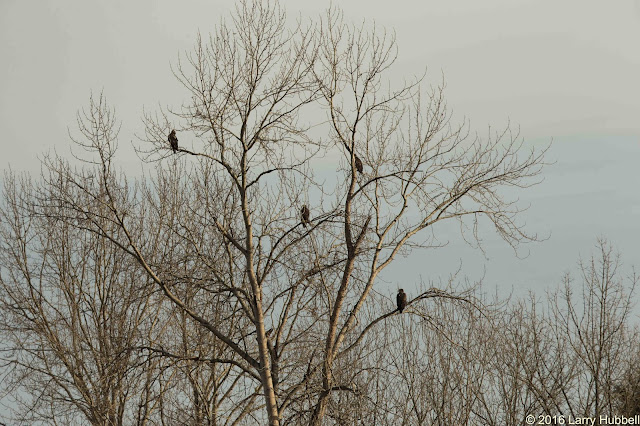 Earlier, I saw four young eagles sitting in a tree on Foster Island. By the time I sprinted out to the island I could no longer find the eagles, but that did not mean the danger had passed. 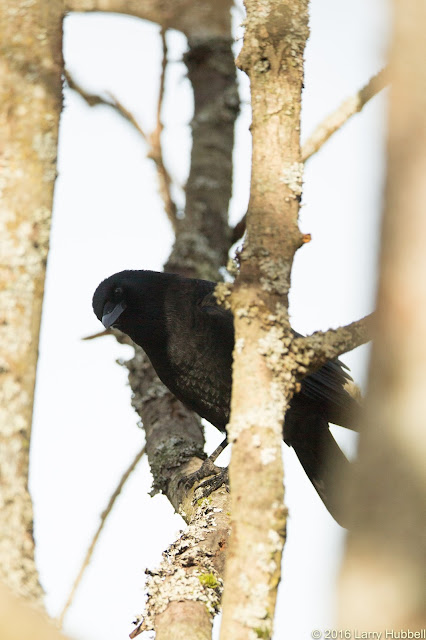 The crow landed below the woodpecker and began working its way up the tree. 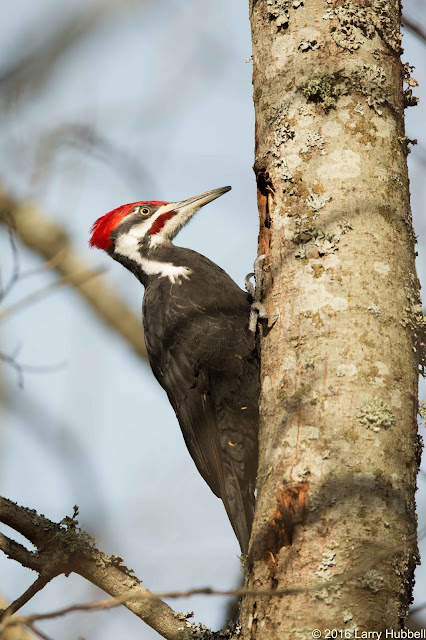 The woodpecker, with his crest slightly ruffled, ignored the crow, circled back around the tree and continued his efforts. 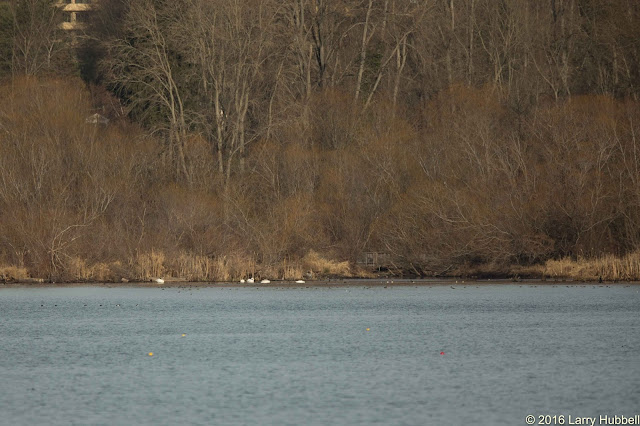 Looking away for a moment, I glanced across the bay and spotted five trumpeter swans sitting outside Yesler Cove. I shook my head and sighed. 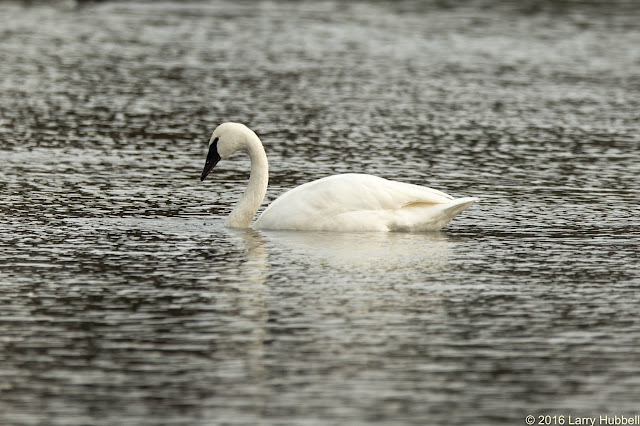 On Tuesday I stumbled across the trumpeter swans while visiting the Union Bay Natural Area. The lack of sunlight left me wanting more. After studying the forecast I picked Thursday morning to kayak out onto the bay for more light and a better angle. 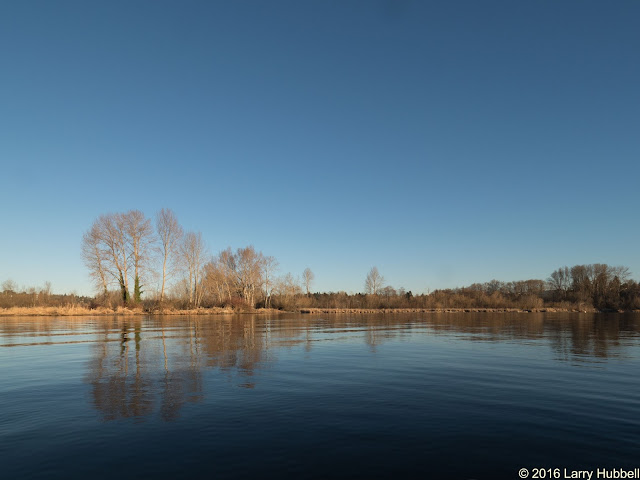 On Thursday just after dawn, the sunlight was brilliant and the angle was great. The photos would have been exquisite - if only the swans had showed up. 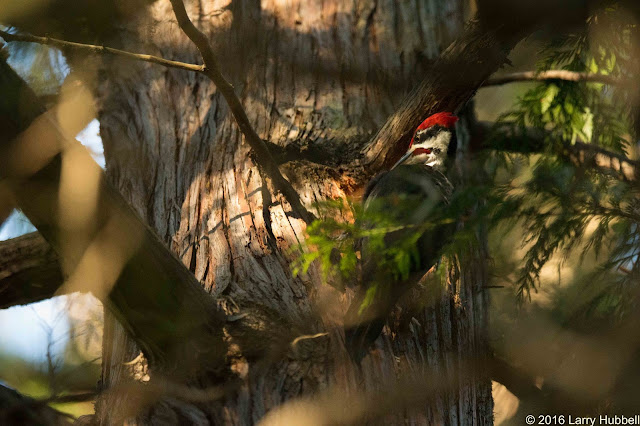 Having missed the swans on Thursday morning, in the afternoon I ending up walking south along Arboretum Drive. I stopped along the way when I heard the unmistakable sound of a pileated woodpecker. I circled off the road, down the stairs and back north on the parallel path. Following the rhythmic beat, I found wood chips raining down from the sky. It was my first sighting of a pileated woodpecker in nearly two months.

The bird was excavating non-stop about forty feet up in a very healthy-looking western red cedar. I was confused. Normally, pileated woodpeckers work at great length in soft, slightly decomposing trees or snags. Finally, after 20 or 30 minutes of hard work, the excavation suddenly stopped. The woodpecker began quietly dipping his head in the hole and feeding. He must have finally reached a carpenter ant's nest, hidden in the heart of an otherwise health tree.

An additional surprise was realizing that the whole process was being watched by a mature barred owl in the next tree to the east. I have no doubt the woodpecker was aware of the owl, I simply suspect hunger on a cold day was a powerful motivator. 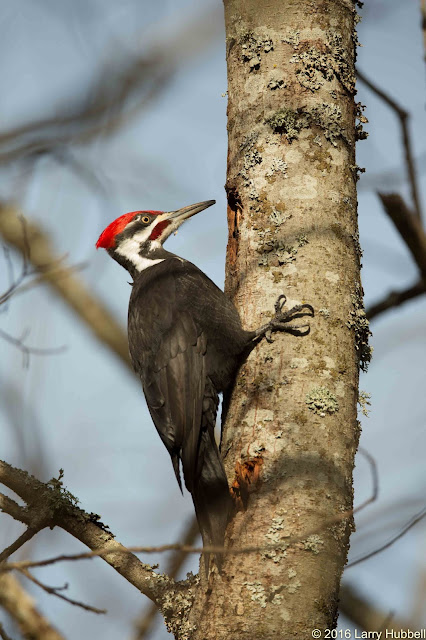 Imagine my surprise to find a second pileated woodpecker on Foster Island the next morning. I look for swans and eagles and keep finding pileated woodpeckers. This seemed especially ironic since the woodpeckers had been eluding me for months. Clearly, I only observe nature, I do not comprehend how it all works together.

In the meantime the crow finally worked its way up to a branch above the Foster Island woodpecker. This must have irritated or alarmed the pileated, so it flew to a nearby cottonwood tree. 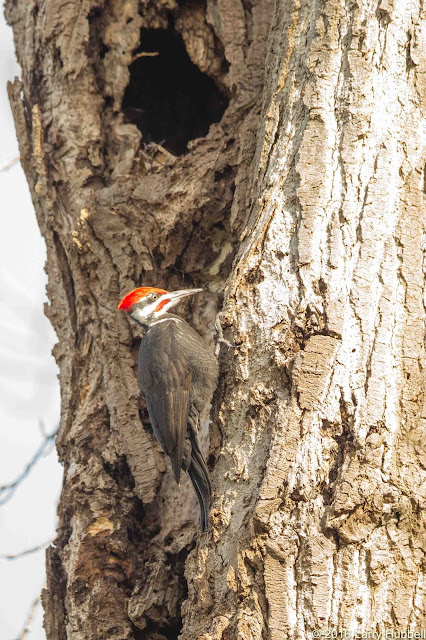 The woodpecker landed just below a cavity in the tree. It made me wonder if the location was accidental or intentional. Did the woodpecker intend to disappear into the safety of the tree if it was pursued? 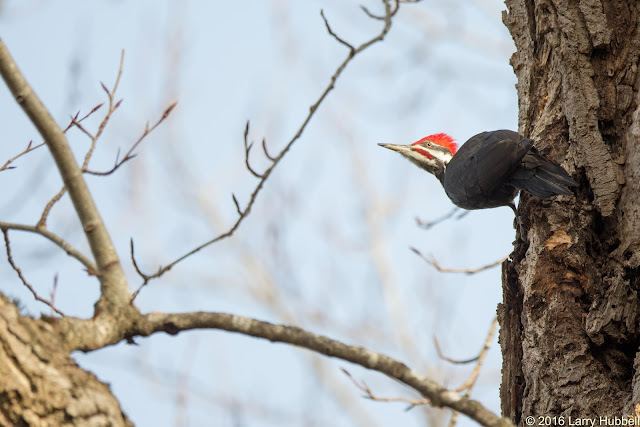 After a few moments the crow wandered off. The pileated checked the sky and prepared for departure. 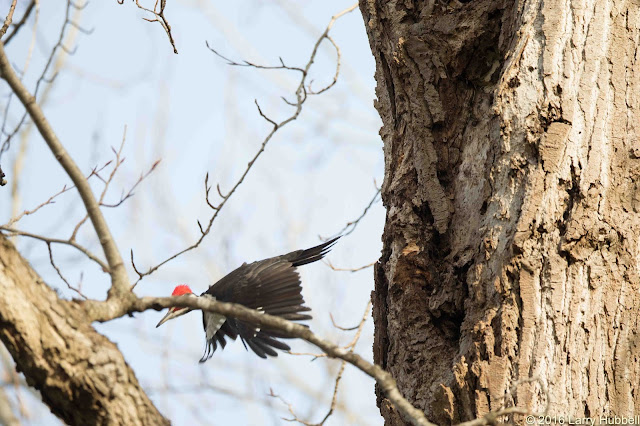 Lucky for me, he headed back down to the same tree. 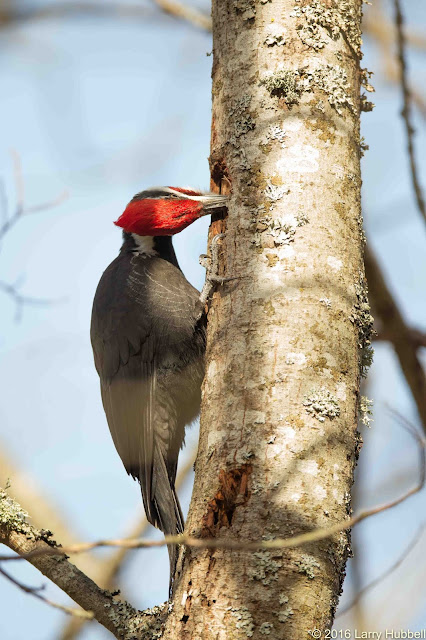 One of the reasons I think this is a young bird is the light whitish edging visible on the ends of its breast feathers. In addition, it seems smaller than a full grown adult. I suspect this may be Squall the young male bird we last saw in July. Click Here to see the prior post. 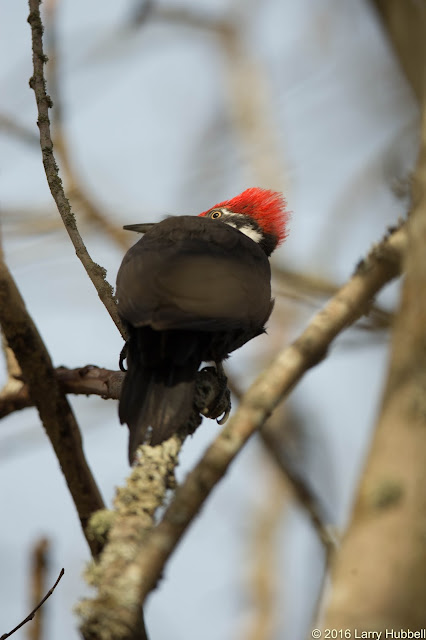 When one of the young eagles finally did passed overhead, Squall became very quiet and observant. 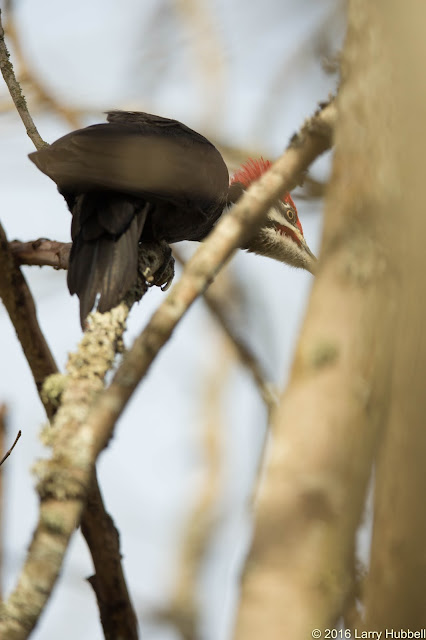 Over the next half hour Squall moved from one tree to next on Foster Island. 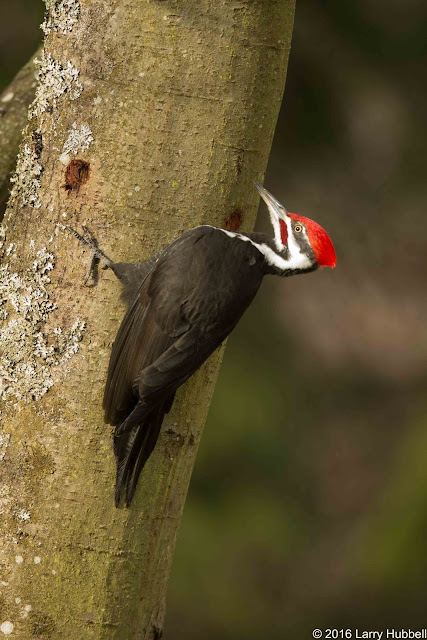 He ended up on a small tree very close to the trail. 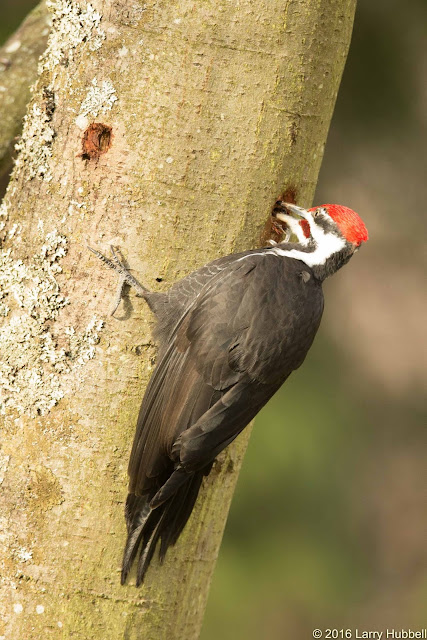 If you look closely at this photo and the next two, you can see he is removing food and pulling it into his beak. 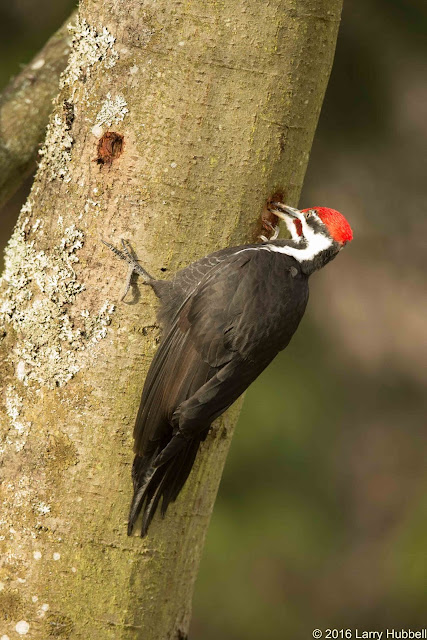 If you walk out onto Foster Island, coming from the direction of the Don Graham Visitor's Center, and then take a left as if you are heading towards Marsh Island, this will be the first tree on your left. 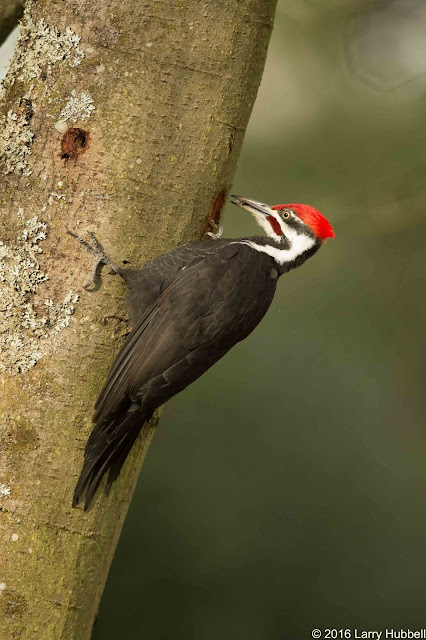 The two holes almost parallel to the ground should make the tree obvious, even if Squall is not hanging out when you get there. 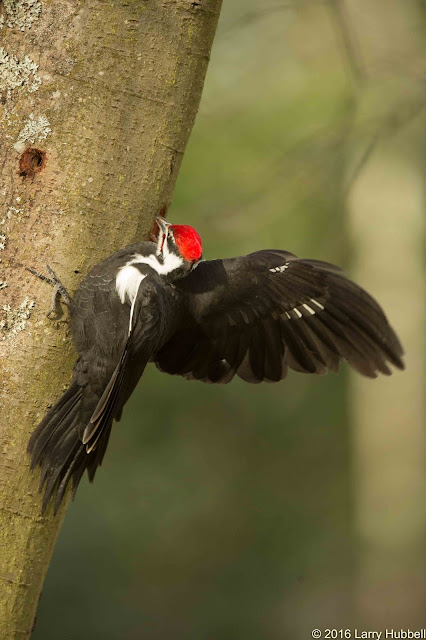 Apparently, feeling the need to get a better angle, Squall spreads his wings and tail in the process of adjusting his perch. 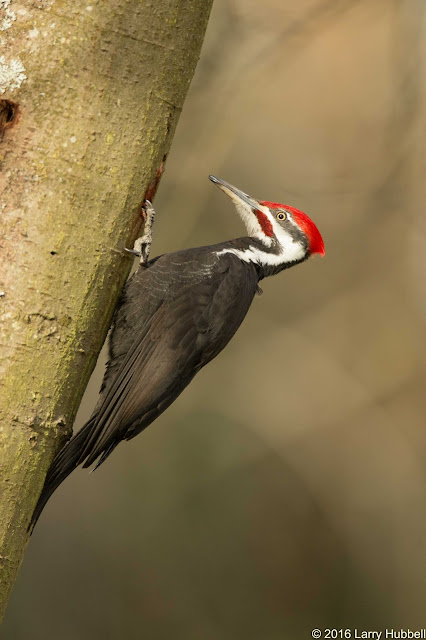 If I had not gotten hungry I am sure there would have been more interactions between Squall and his neighbors. It is hard to walk away from young bald eagles, trumpeters swans in the distance and the beauty of a pileated woodpecker. 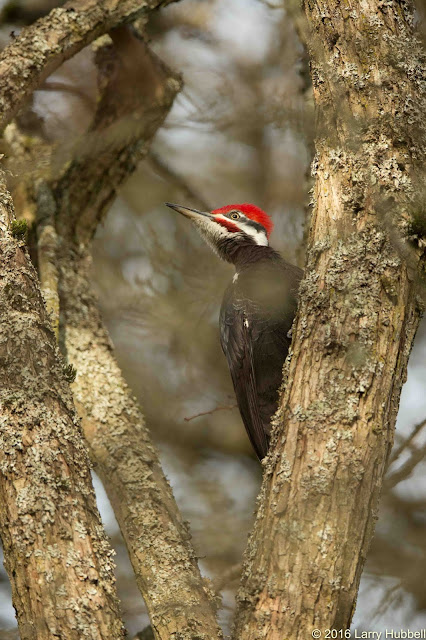 Have a great day on Union Bay...where nature does as it pleases!