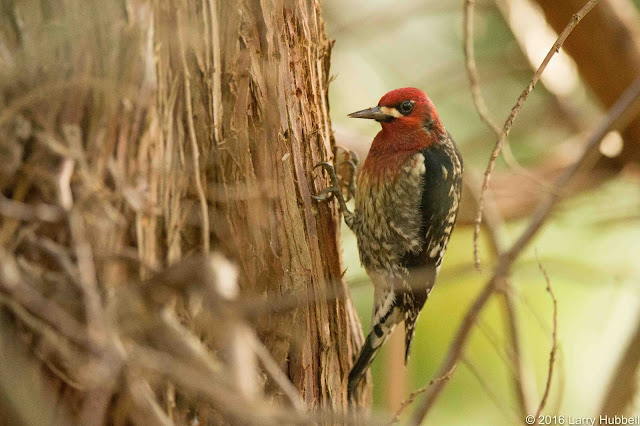 The red-breasted sapsucker is a diligent, hardworking bird. Ninety-nine percent of the time when I find one, it is hanging on the trunk of a tree, hidden among the branches and mining a sap well. In summer and spring I see them working primarily on deciduous trees. Trees which have no leaves in the winter must have a robust flow of sap when they are putting out new growth. Maybe, it is the volume of flow which attracts the sapsuckers or maybe the sap is simply sweeter - even to me maple syrup sounds sweeter than cedar syrup. 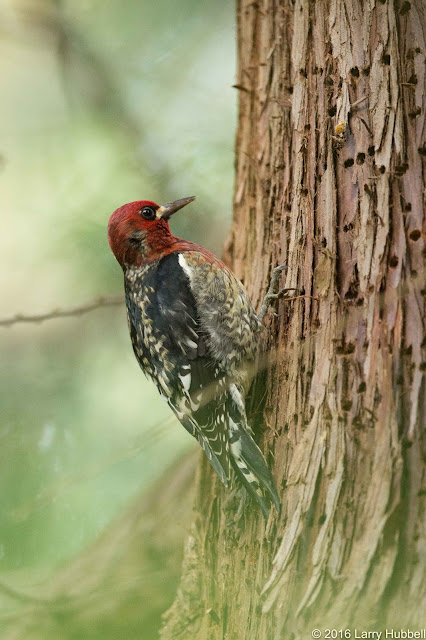 In the winter after the deciduous trees have gone dormant, I find sapsuckers working in coniferous trees. About a week ago, for the first time this year I spotted this red-breasted sapsucker in a western red cedar. 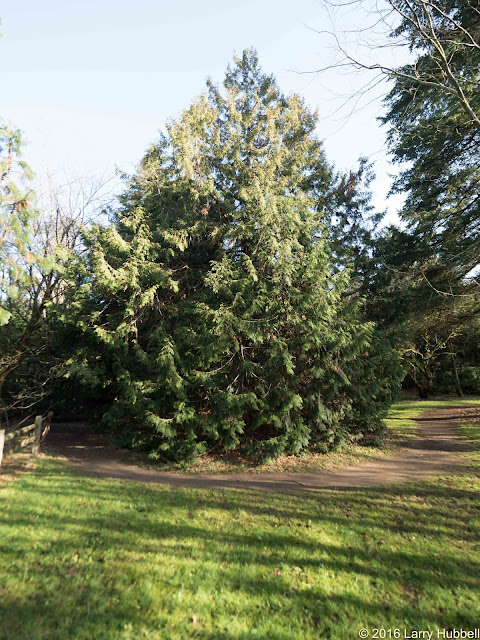 The tree is about two feet in diameter at the base and maybe 35 feet in height. 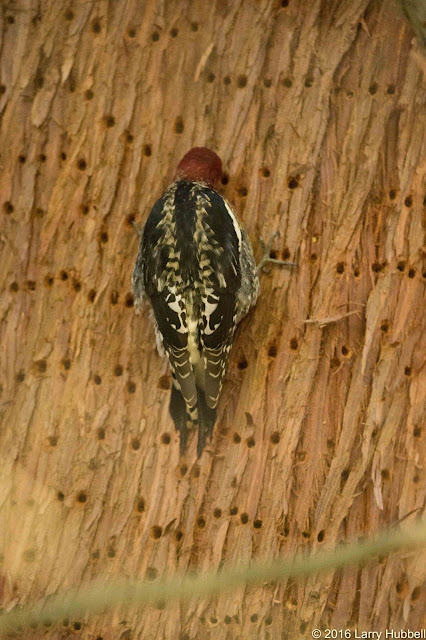 It is covered with thousands of holes. The first thing people ask when they see all the holes is, 'Does it hurt the tree?' This tree's foliage may be slightly more sparse than other western red cedars, but it certainly does not appear to be dying. I do wonder if the tree might have been a bit taller by now if it had not been selected by sapsuckers. Two years ago I noticed a sapsucker working this tree - even then it was already covered with sap wells.

Curiously, just ten feet to the east is a second slightly smaller western red cedar tree. I have checked the second tree very closely and I cannot find a single well. I cannot help but wonder why the sapsuckers prefer one tree over the other. 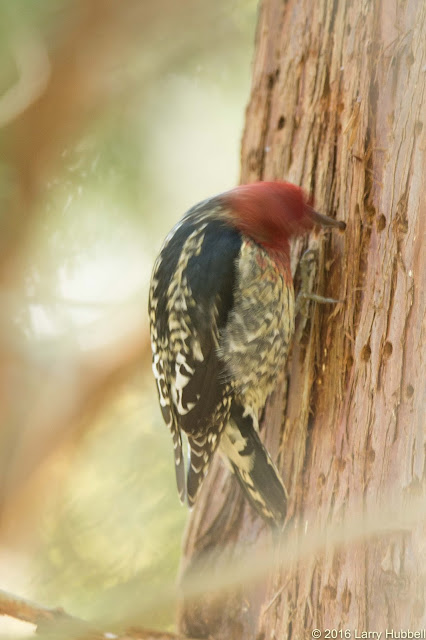 This photo demonstrates the sapsucker's usual level of activity. The body is propped up on its tail and nearly perfectly still - while the head is in constant motion. Unlike most other woodpeckers, the tapping and drilling of sapsuckers is usually syncopated. Like the rhythm of a jazz musician or boxer throwing punches, I can never predict their pace. Click Here - and then scroll down and press the triangle - to hear one for yourself. 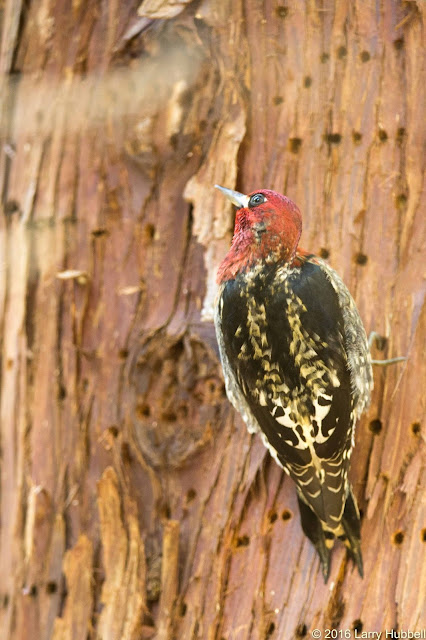 Whenever a large bird flies over, the sapsucker glances up at the sky. 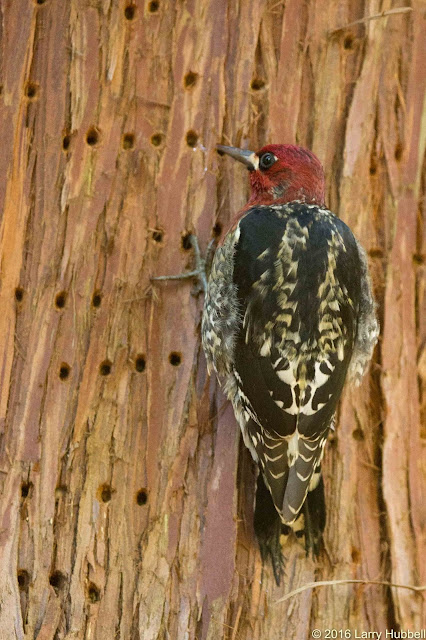 Unlike a robin or a varied thrush which can be similar in size, the sapsucker is seldom flushed by a potential predator. Robins and thrush are usually more exposed because they are often eating fruit on the periphery of a tree. The sapsucker simply clings to the trunk of the tree, with numerous branches interwoven above its head. It finds safety among the shadows. 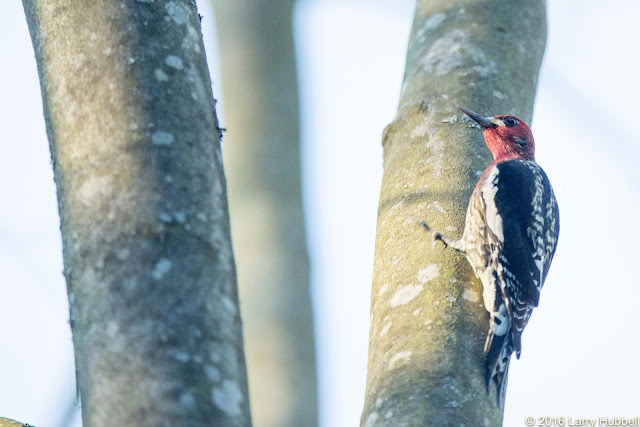 I have only seen the sapsucker leave the safety of the western red cedar tree once this week. 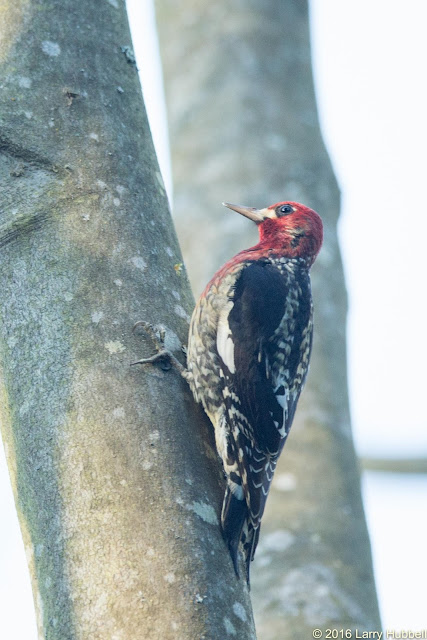 It landed on a nearby deciduous tree and began a sap well. 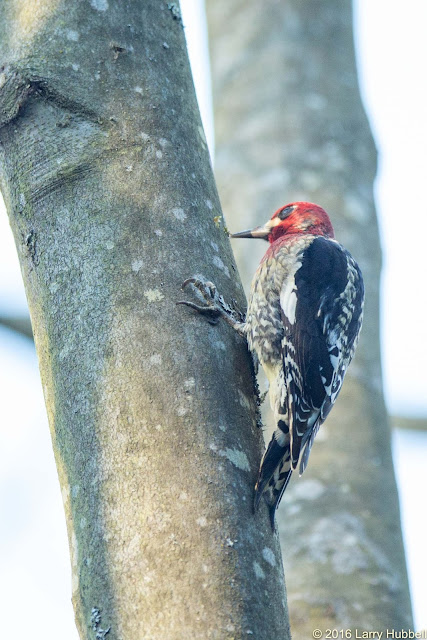 I suspect it was a test. 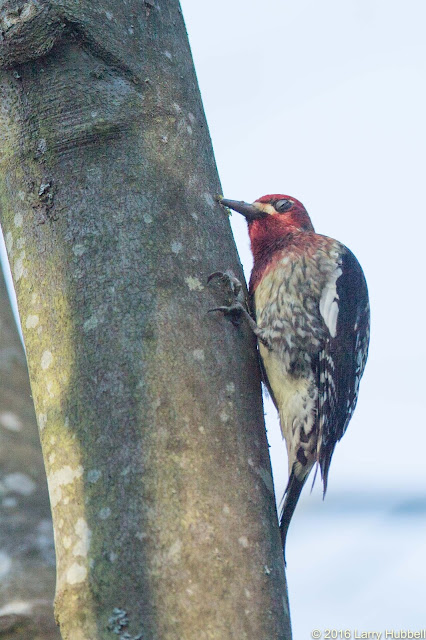 It was as if the bird was asking, 'Has your sweet summer sap really stopped flowing?' 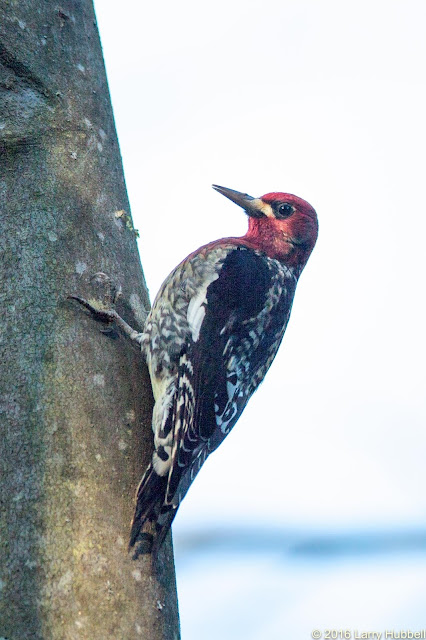 The sapsucker soon flew away. Apparently, the little bird learned that wishing does not make it so. 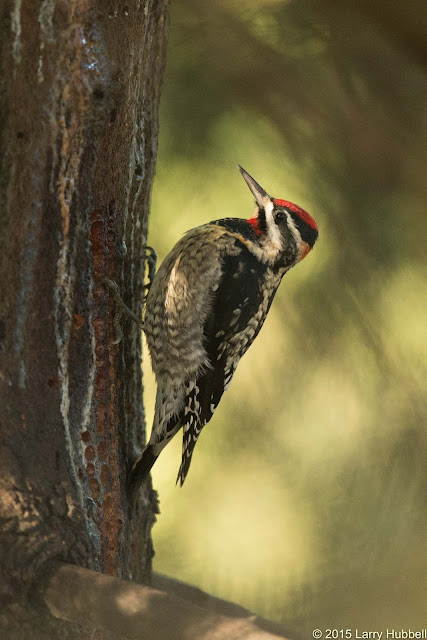 Earlier this week, my friends Uli and Stella mentioned seeing a rare winter visitor in the Arboretum - the red-naped sapsucker. I have not seen it. Just in case one of us gets lucky, I thought it would be good to include this photo from January of 2015. I find the black and white stripes on the side of the head are the most obvious differences. I would certainly love to get more photos of a red-naped sapsucker. 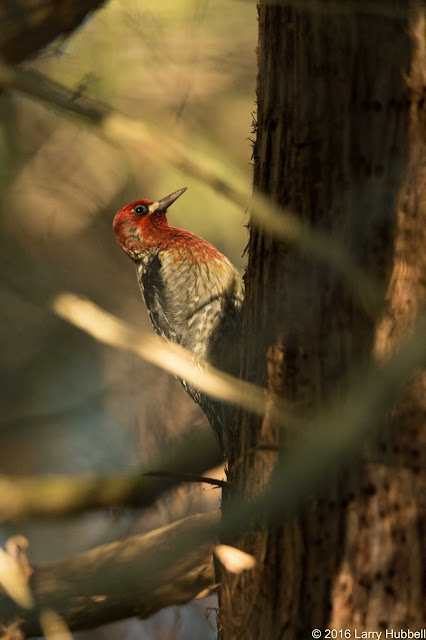 In any case, the good news is we have just passed the winter solstice. The days are getting longer. There are buds on the indian plum - in which the hummingbirds like to nest. Creatures large and small are preparing for the new year. Any time now the great horned owls and the anna's hummingbirds will be laying eggs. It may be winter, but the signs of spring are all around us.

Earlier today David Zuckerman, Manager of Horticulture for the University of Washington Botanical Gardens, graciously provided the following update regarding the tree shown in this post.

I just got back in from the cold damp Legume collections. The tree in question is actually a hybrid between our WRC and Japanese Cedar. Scientific name: Thuja plicate x standishii. And, yes, tree to the north is same. They are 234-62-A and B respectively.

They were received as seed from Horsholm Arboretum, Denmark, in 1962. Planted out in early 70's.

Health of tree is Good. Same as specimen to the north which doesn't appear to have any sapsucker signs.

I really appreciate David's effort, expertise and update. It is wonderful to know for sure that the sapsucker's holes are not endangering the health of the tree. Plus the fact that it is a cross between a Western Red Cedar (WRC) and a Japanese Cedar, along with its relatively young age, may explain the tree's shorter stature as compared with a mature WRC.