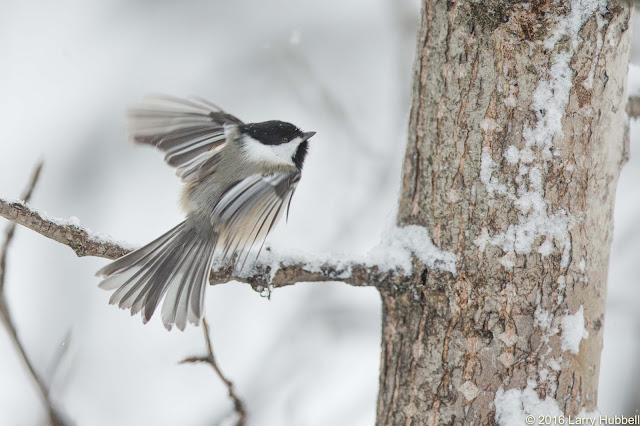 Chickadees suddenly surrounded me. They silently flickered from one snow-covered branch to the next. They paid more attention to the tree trunks than to me. 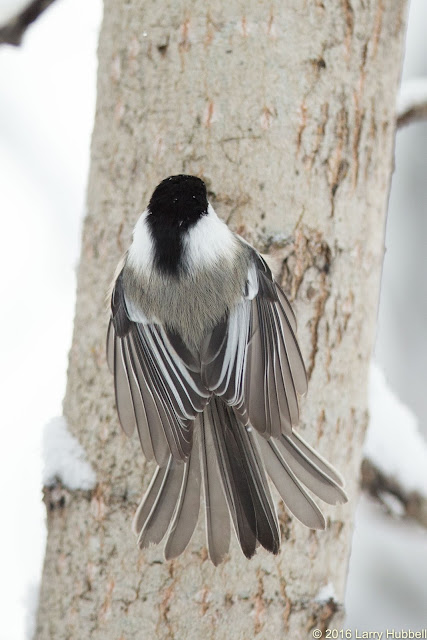 They inspected the boles and the branches for food. I on the other hand, was too big to eat and too slow to worry about. 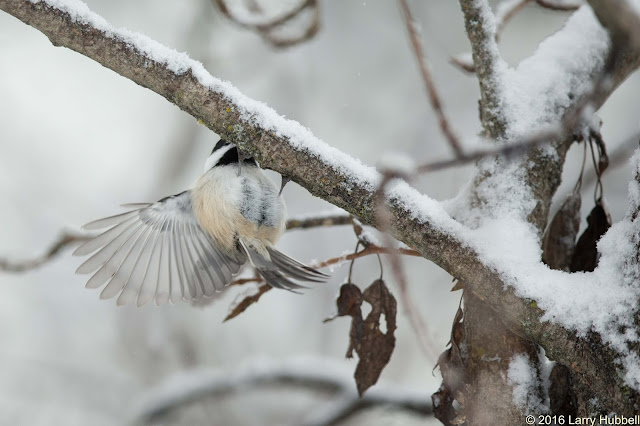 Their near-sighted inspection of the trees was relentless and fierce. 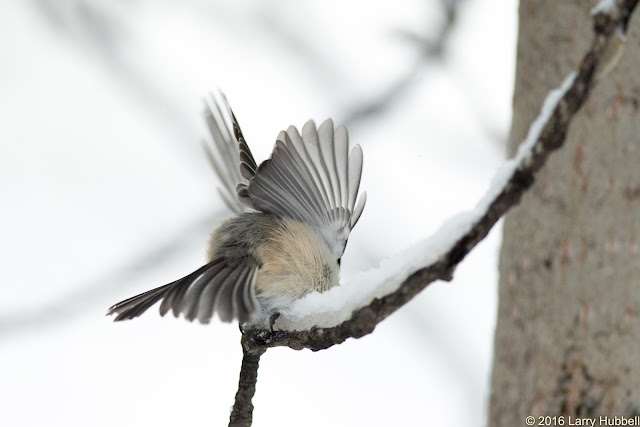 I suspect every morsel of nourishment they found was instantly converted to heat. 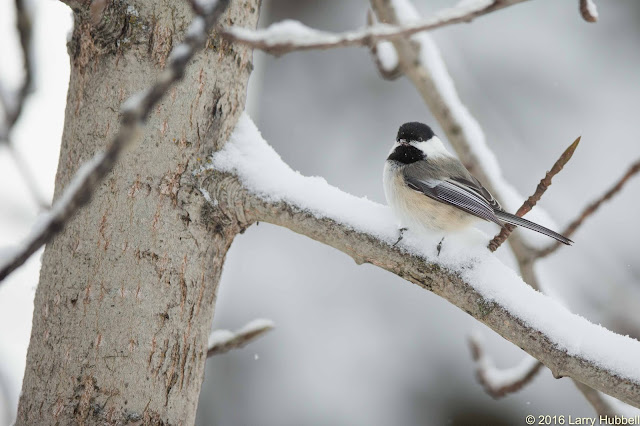 I had been photographing a bald eagle - who was gnawing nourishment off of a disjointed salmon jaw - in a tree above the Chilkat River, when the loose-knit flock of intruders surrounded me and stole my heart.

From my limited experience in the Pacific Northwest I knew these little birds were not mountain or chestnut-backed chickadees. The only other choice that came to mind was black-capped chickadees. Their color pattern looked basically right, but unlike our Union Bay black-capped chickadees, the chests of these birds seemed strikingly white. The contrast in their colors created a crisp, clean look, while their white breasts blended perfectly with the snow. They fit in the frigid environment the same way orcas belong in the Salish Sea. It was as if the eagles evaporated from my mind.

For four days I had been watching swans and eagles, gulls, ravens, magpies and mergansers. If anyone had asked, I would have said it sure looks like everything smaller than magpies has gone south. I would have been wrong. In spite of the cold, the tiny chickadees were perfectly happy, healthy and clearly...at home.

Immediately, I began to question my perceptions. Could it be that the Union Bay and the Chilkat chickadees were actually the same color? Was it just the snow which made the little Alaskan birds seem lighter? Could the grey skies of Seattle make me feel like the Union Bay birds were darker? Was the difference all in my head? Mentally, I filed the questions under the heading To Be Determined...

If you happened to miss the post concerning the largest bald eagle convention in the world this link will provide you another opportunity. 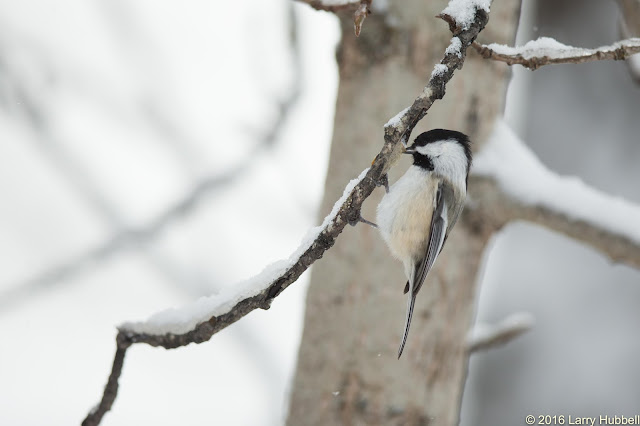 This tiny chickadee peaking into a cocoon, reminded me of a Union Bay bird which I photographed in the Arboretum. 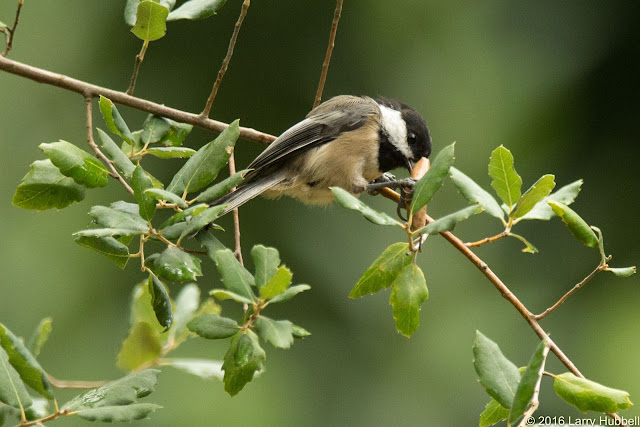 When I returned home, I retrieved the earlier photo. Our local chickadee also spotted some type of larva or egg, but in this case it was protectively wrapped in a dead leaf. 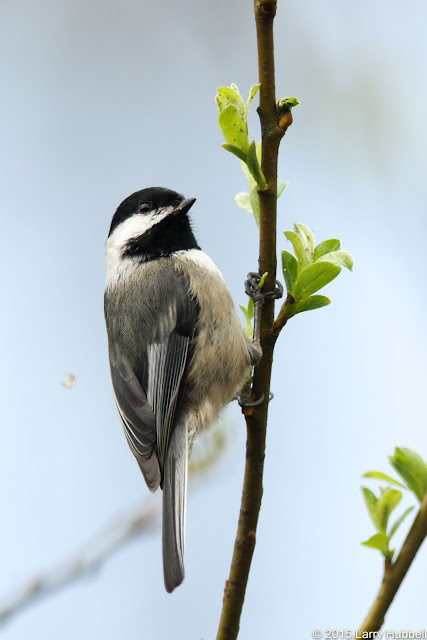 While inspecting more black-capped chickadee photos, I became certain that the Union Bay birds really do have darker backs and sides. 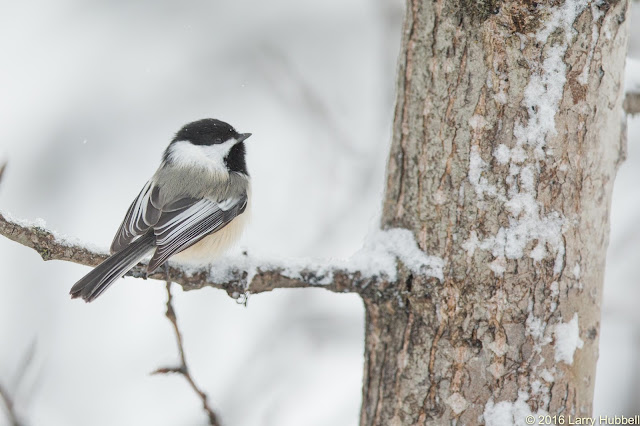 There was no longer any doubt in my mind. Chilkat chickadees have lighter body colors and possibly even more white along the sides of their heads. 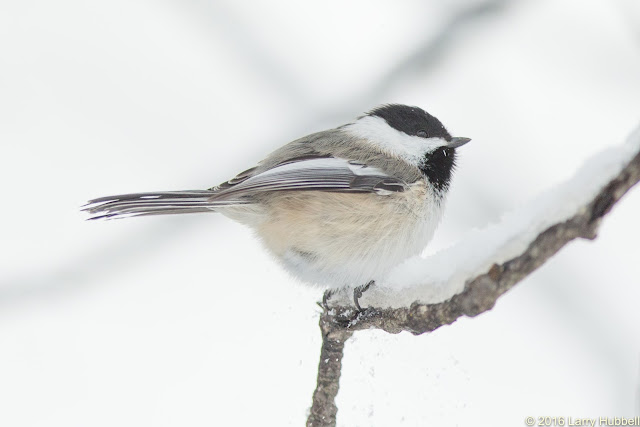 I think the eyes and possibly the beaks of the Chilkat chickadees look smaller. Without the opportunity to hold and measure them, I cannot be completely positive about the relative size of their features. In any case, I wondered if these could be small adaptations which might assist them in surviving the Alaskan cold. 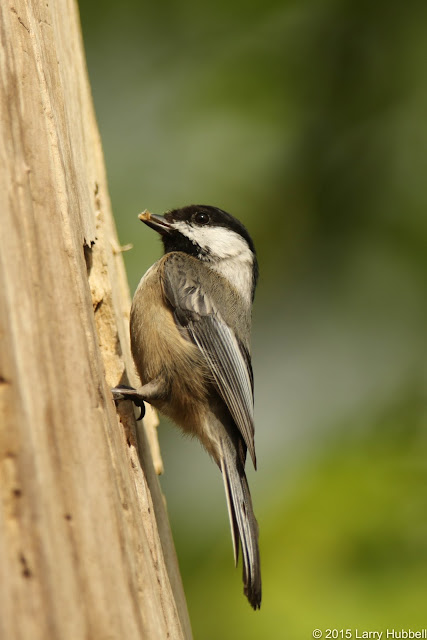 I find comparing the two 'types' of birds irresistible. This Spring photo shows one of a pair of local chickadees who were building a nest on Foster island. I watched them dig the nesting hole out of a dead tree - one beak-full at a time. They even carried the wood chips away, apparently hoping to make the nest less obvious. Look at the size of that eye and beak. 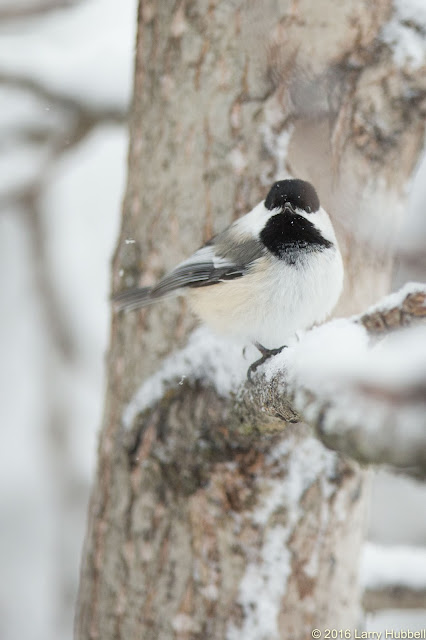 While reading Birds of North America I learned that there are actually seven different sub-species of black-capped chickadees. One species or the other can be found almost all across the continent, as long as you are looking somewhere north of Texas. Curiously, the darkest of the seven are the ones found around Union Bay. Their scientific name is Poecile atricapillus occidentalis. As luck would have it, the lightest of the subspecies are those found in the Alaskan Panhandle e.g. the little birds who found me beside the Chilkat River. This subspecies is called Poecile atricapillus turneri. It was reassuring to realize that there is scientific support for my somewhat oscillating perception of their color differences. 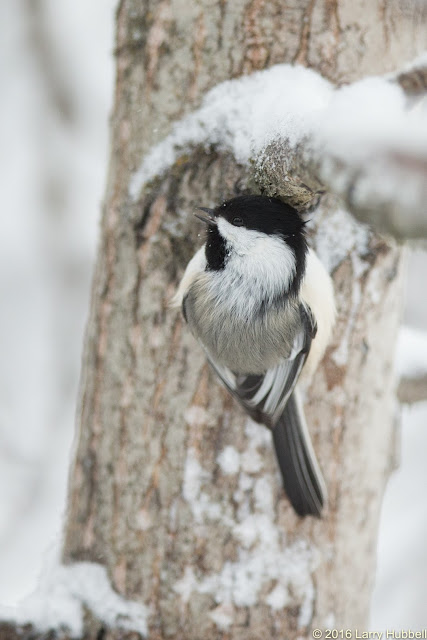 I wonder what will happen to the Chilkat chickadees as the world warms. How will they utilize their unique skills and abilities without snow? Will their bright white breasts in a snow-free world make them shining targets for hungry accipiters? Will they be able to compete when our darker Union Bay chickadees reach Alaska? 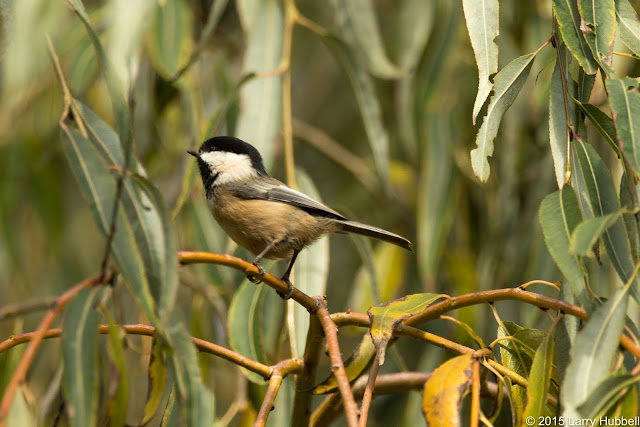 How many of the subspecies will survive? 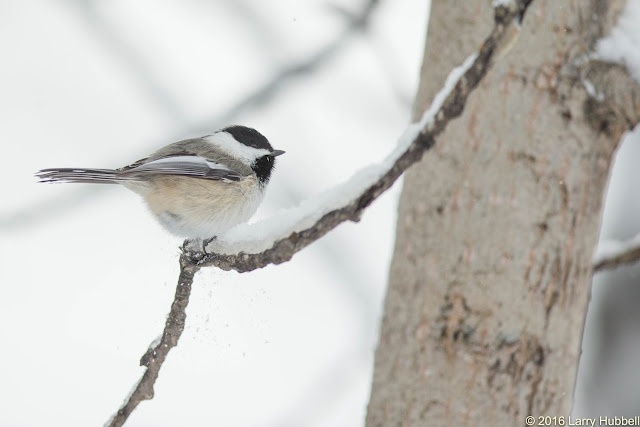 The realization that my visit to Alaska contributed to the carbon problem made me feel frustrated and sad. 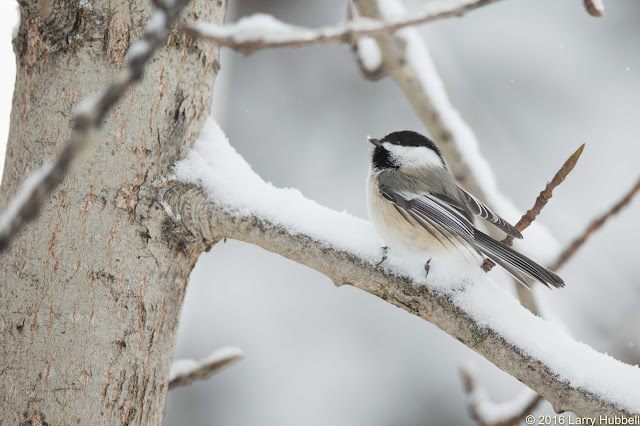 In a week or two, when our weather warms up, I will add a new, native tree in my yard. I intend for it to grow and consume enough carbon to offset my Alaskan adventure. I hope that someday my wife and I will have grandchildren and I hope that they too will have the opportunity to be mesmerized by black-capped chickadees flickering from one branch to next.