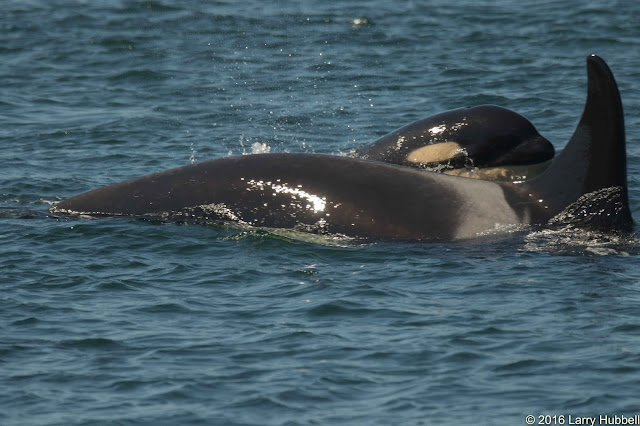 Princess Angeline's latest offspring peaks over her back.

I must confess that A) I have never seen orcas before this week, B) my identifications are provisional and C) none of these photos were taken on Union Bay.

Earlier this month I spoke with a kind-hearted couple at the Union Bay Natural Area. They suggested that I might enjoy photographing orcas from Lime Kiln Point State Park on San Juan Island. Thank you both (Rick and Diana) for a wonderful suggestion! 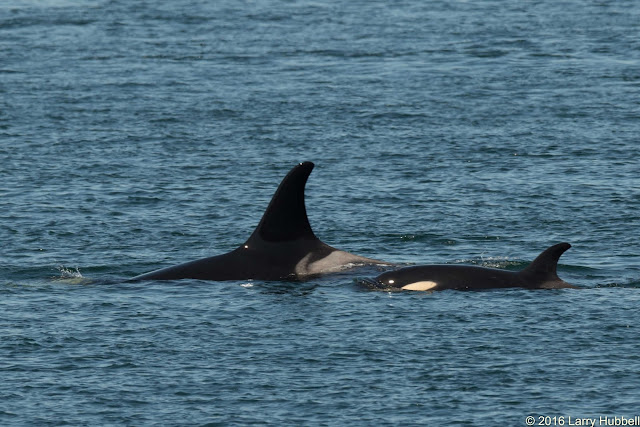 Princess Angeline (J-17) was born in 1977 according to my documentation. My references were purchased at the Whale Museum in Friday Harbor - you can see the titles below. Angeline's latest offspring (J-53) is less than one year old. One of the booklets mentioned that Angeline can also be seen in the "Free Willy" movies. 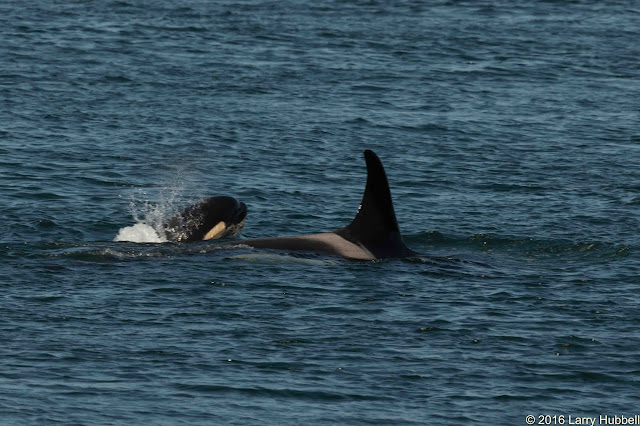 I found that the morning light was best for taking orca photos from Lime Kiln Point. 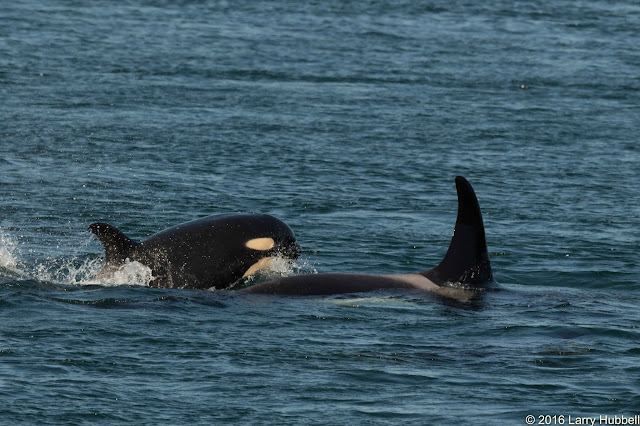 Sadly, I never did catch a whale doing a full body breach. My camera was never in focus and pointed in the right location at just the right time. After just thirteen hundred shots, I can say with confidence that photographing orcas is not as easy as falling off a log. 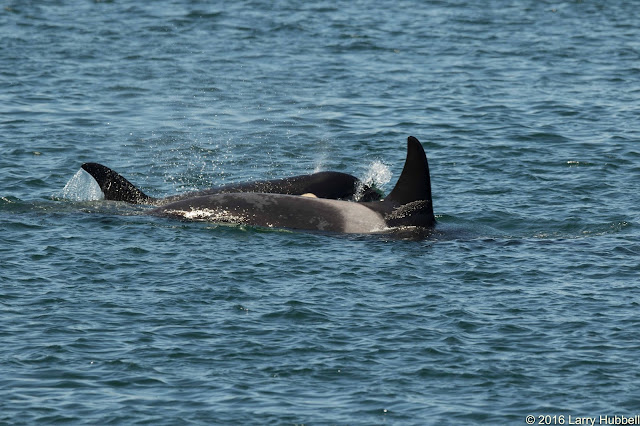 Most often the orca's fin silently breaks the surface for just a moment or two, before once again sinking out of sight. 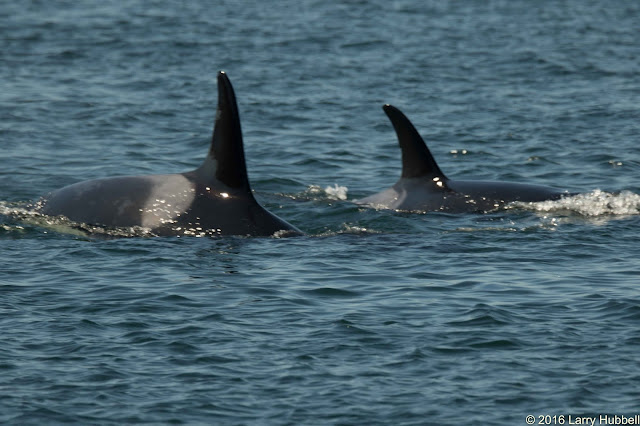 According to the documentation, the eldest of the J Pod orcas is Granny (J-2). She is believed to be 105 years old. It is hard to imagine her experience and knowledge. I think the saddle patch on the whale on the left looks a lot like Granny's photos, but I also see other orcas in the references who look similar. 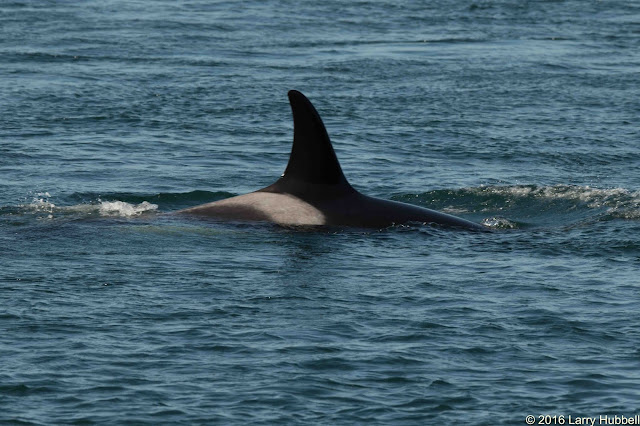 Regardless of the precise identification, watching the orcas is truly awe-inspiring. The person next to us pointed out their smooth, gentle gracefulness, which I found both impressive and soothing. 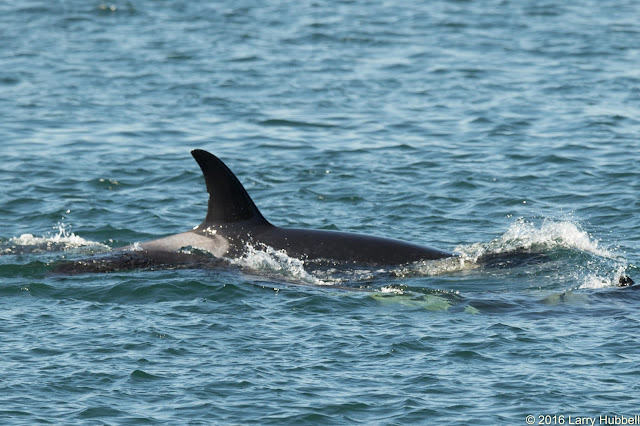 I over heard researchers, sitting near by, mention seeing the whale Notch (J-47). This photo is a very close match to his documented photos. He is apparently named for the little notch halfway up the backside of his dorsal fin. According to what I read, he was first spotted in 2010. Wouldn't it be interesting to know how he got his notch. 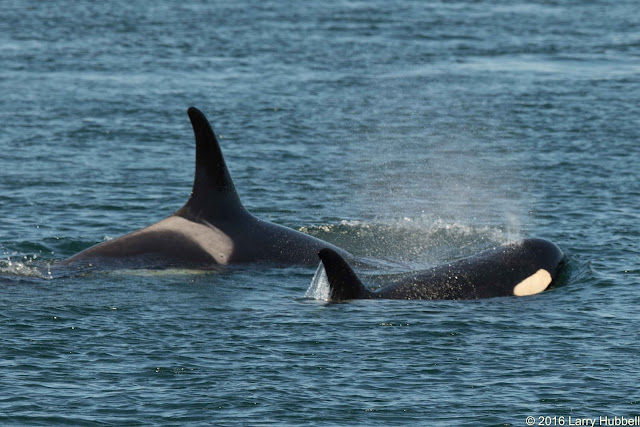 I have learned that mature males can weigh as much as four tons. Unlike raptors, mature female orcas are smaller than the males. They average a dainty 3000 pounds. Note: Other sources list some much larger maximum weights for both genders. In either case, their power is evident in the bow waves they create when they put their heads down to dive. 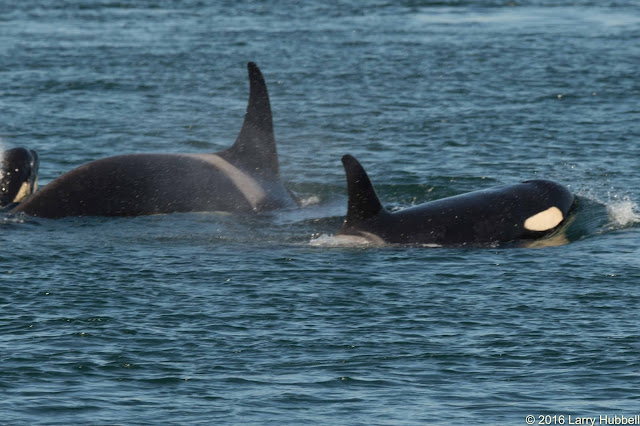 Seeing three or four whales together makes me wonder how often single whales, as seen on the surface, are actually traveling with companions hidden beneath the waves. 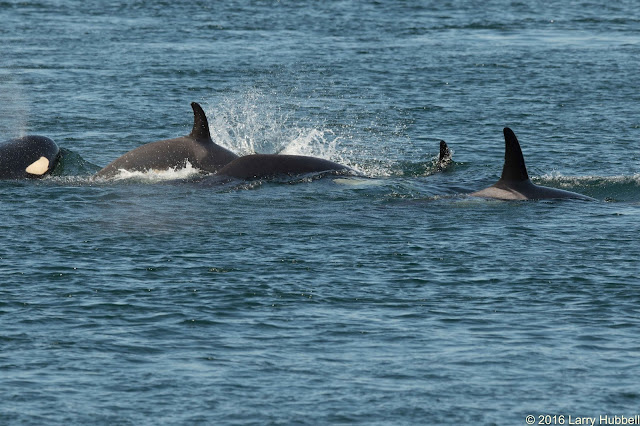 No matter how large the whales are, or how close together, I never saw any sign of crowding or anger. They appear very well-mannered, almost civilized. The term "killer whale" certainly seems like a misnomer. 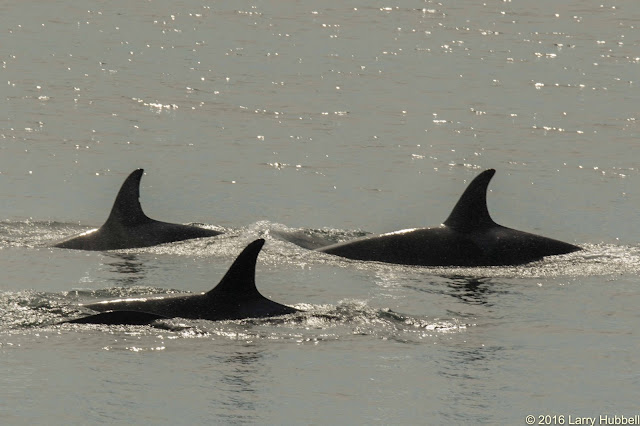 Later in the day, with the sun sinking behind them, they appeared as silhouettes. Their white markings become less obvious, however the notch on the dorsal fin on the far left still looks distinctive. 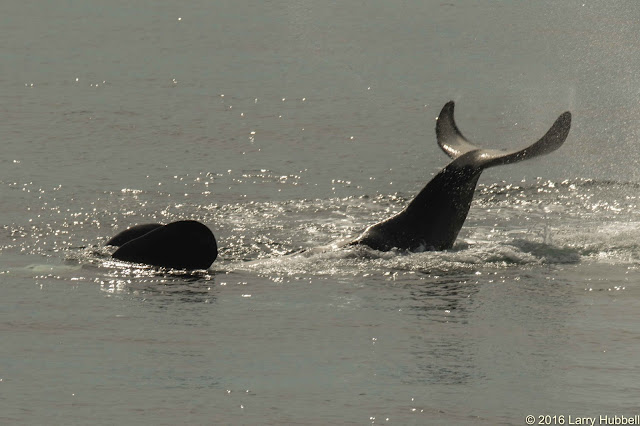 I have heard that orcas need about 200 pounds of salmon every day. My guess is that this whale has had its fill and is laying on its back and splashing its tail just for the fun of it. 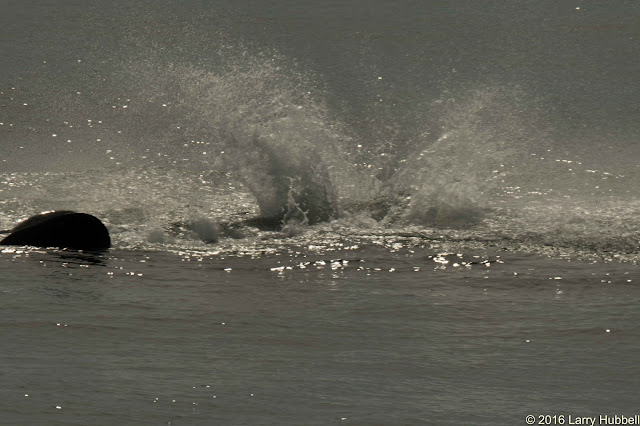 During our limited visit, there appeared to be more playfulness later in the day. 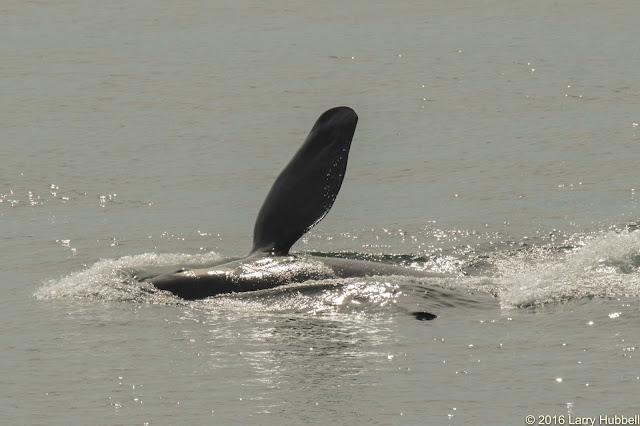 Swimming sideways also allows a flipper to be used... 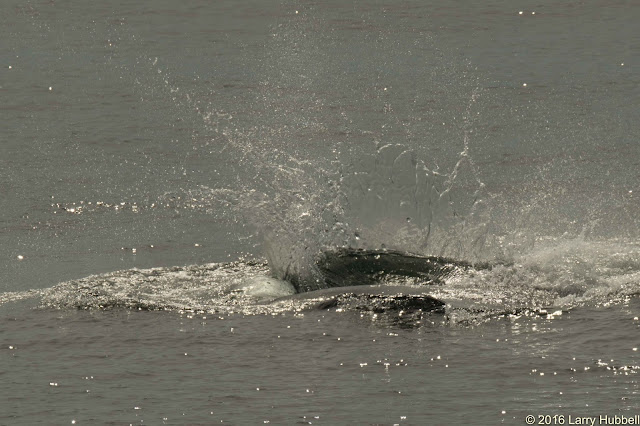 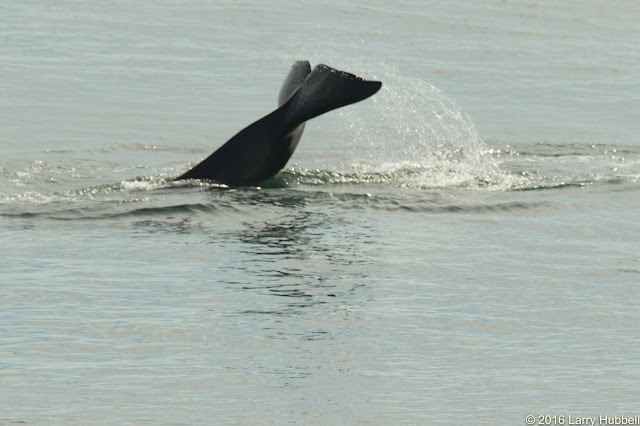 Sadly, most of the decline in resident orcas appears to be happening to this southern group - the J Pod. Twenty years ago there were nearly sixty whales in the pod, today the number is closer to thirty. They need abundant and healthy salmon. A pod of 30 eats about 6000 pounds a day. It makes me wonder if I am doing everything I can to help with salmon recovery. (Long live the Kings is a great local organization - focused on salmon recovery.) 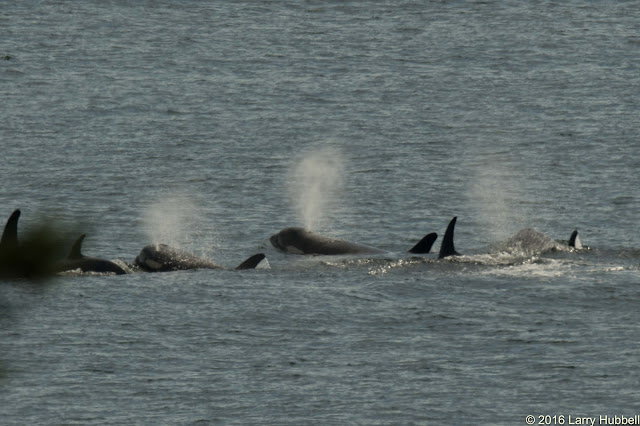 I wonder how much longer J Pod will survive? Will our grandchildren get to see these beautiful creatures? 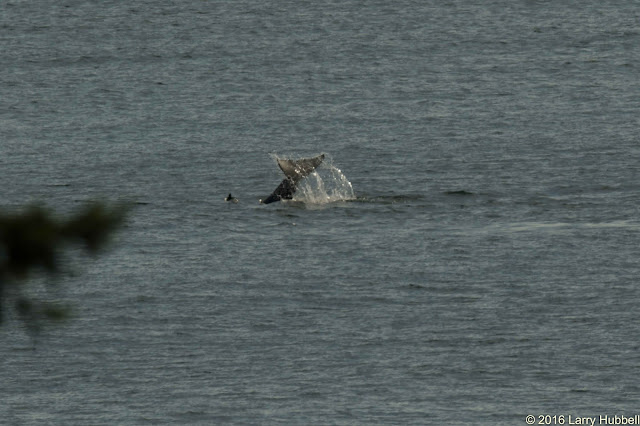 I am hoping this tail flip signifies "See you later", not "Good Bye."

Humans and orcas, trees and streams, salmon, sound or bay we are all interconnected pieces in the web of life.

Have a great day on the Salish Sea...where J Pod struggles to survive!

References used and purchased at the Whale Museum:

1) "The Southern Resident Community of Endangered Orcas", Family Groups 2016 - A Handy Reference Guide to the Family Groups in J, K and L Pods. 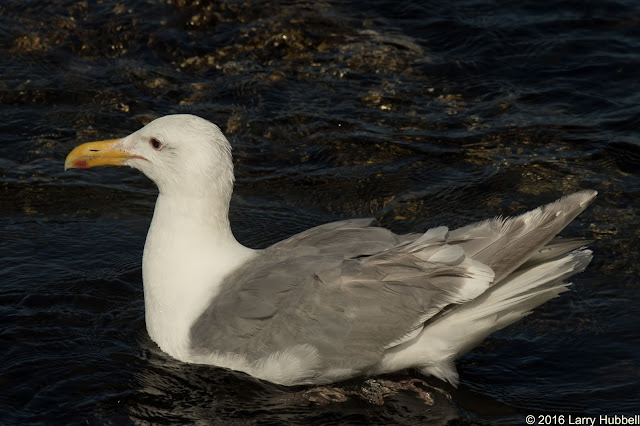 Just before the orcas arrived at Lime Kiln Point I caught a few photos of this gull. 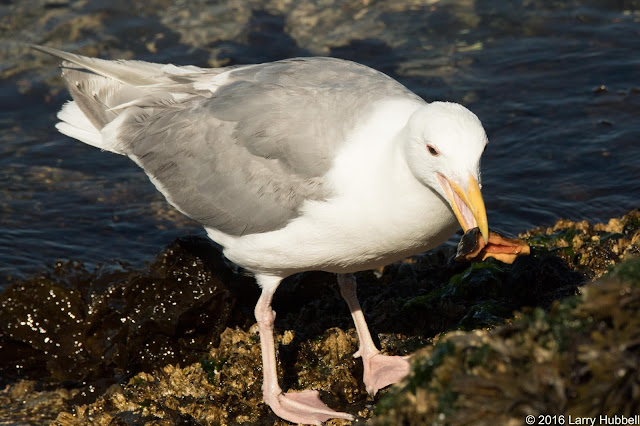 This week's birding challenge is to identify both the gull... 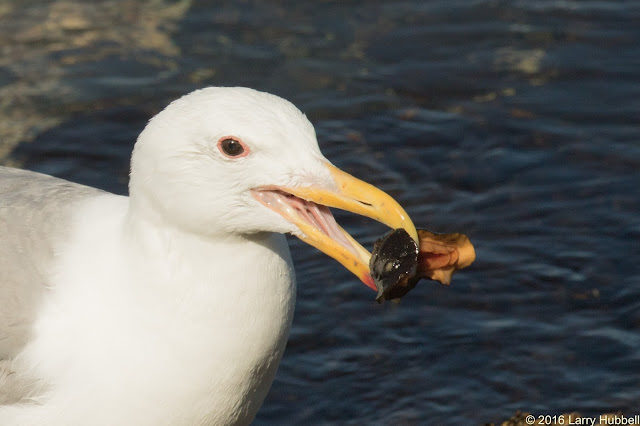 ...and its food. Please include your sources and logic used. Honestly, I am hoping to learn some of the finer points of gull identification. My email is: LDHUBBELL at comcast dot net. 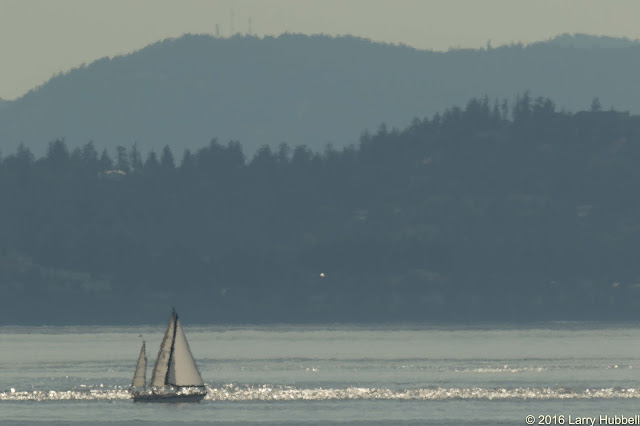 This photo is looking southwest from San Juan island. That is Vancouver Island in the foreground. I am uncertain if that is the Olympic Mountains in the distance or a high point on Vancouver Island. 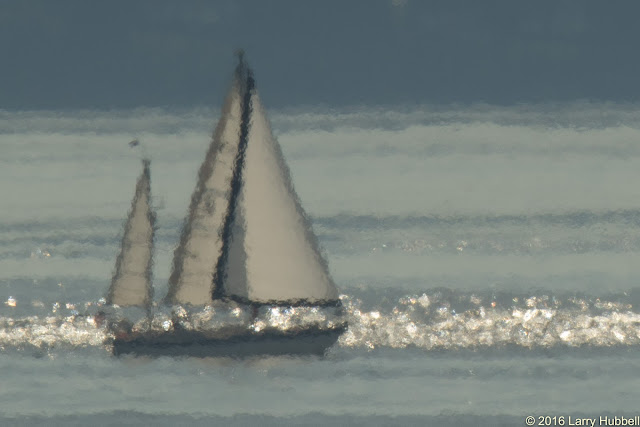 The distances involved exceeded the optical clarity of my lens. With the heat waves and everything involved the result is that this enlargement of the photo looks more like a painting than photo. I found it curiously interesting.