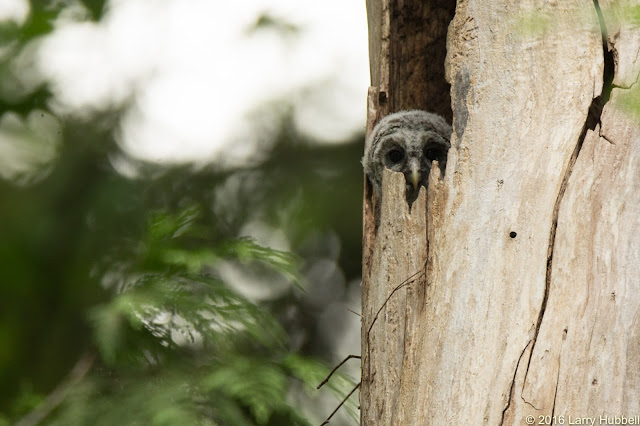 Last year, my first photos of young barred owls were taken on May 11th.  Given the state of their white downy feathers and their fluttering and inept use of their wings, I believed they had just left the nest.

This year, I visually inspected the nest almost every day in May. The month came and went without any sign of owlets. I kept hoping. As long as the female's tail feathers were hanging out of the nest I assumed she was still on eggs. When she disappeared from the nest and no young appeared, I became concerned. When I finally saw the small dark eyes peering out of the tree, it was a great relief.

It turns out that our warmest recorded Spring did not cause the owls to hatch early. In fact, they must have hatched almost a month later than last year. I have no idea what may have caused the delay. 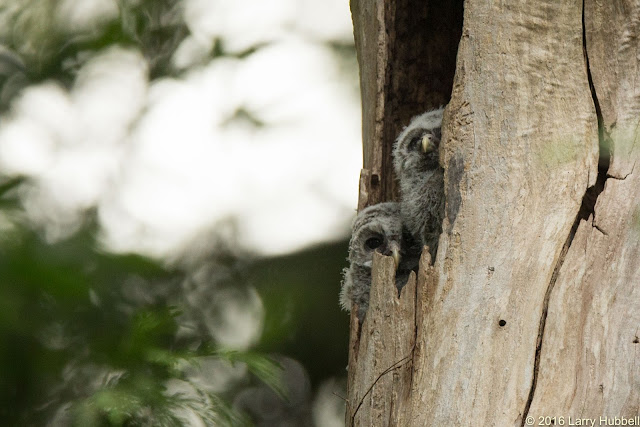 When the second little head appeared, I was even happier. Initially, the owlets would just glance outside and then pull their heads back into the comforting safety and darkness of the nest. 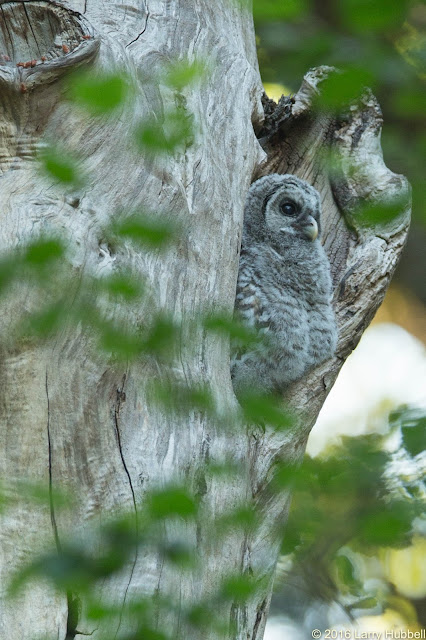 The next evening one of the owlets became a bit more bold and sat surveying the new world outside the nest. Given this was my first time watching the process, I had no idea that the next day the owlets would fledge. 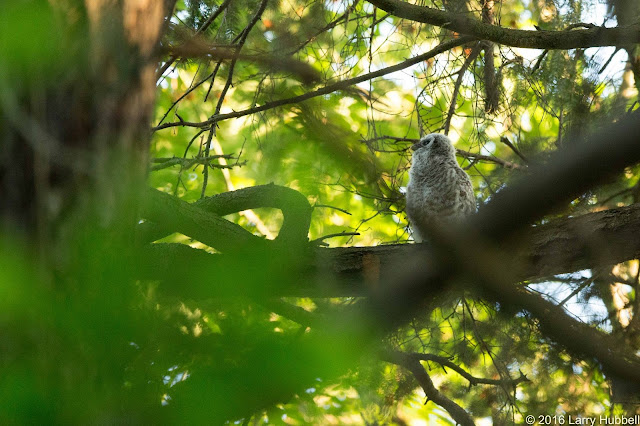 They were already 75 to 80 feet up in the trees when I first spotted them - maybe twice the height of the nest. 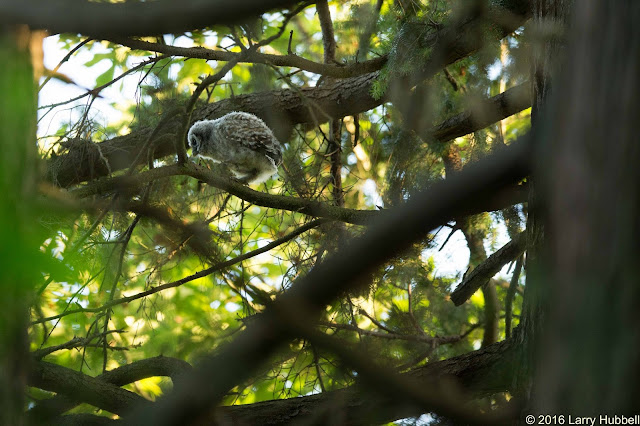 In spite of being nearly flightless, the young owlets were very confident in their climbing. Their claws and muscles seemed quite strong for their weight. They flapped their wings fairly often, but seemed to do it for balance more than for lift. At this point, one of the young birds leaped for a nearby branch...and missed. 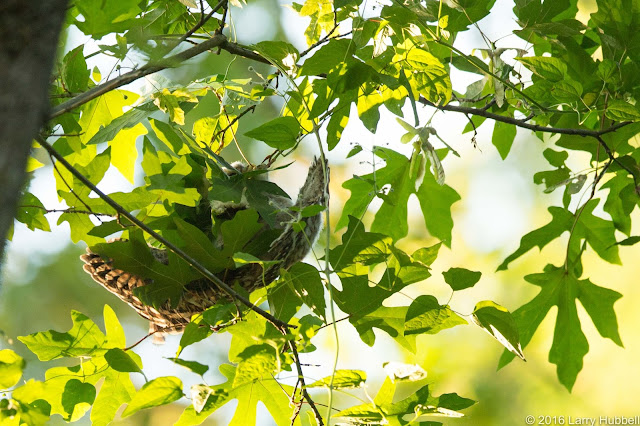 While still in the air, maybe 40 feet above the ground, it caught hold of a big-leaf maple twig. I think the larger twig, which might have supported its back a bit, may have made all the difference. 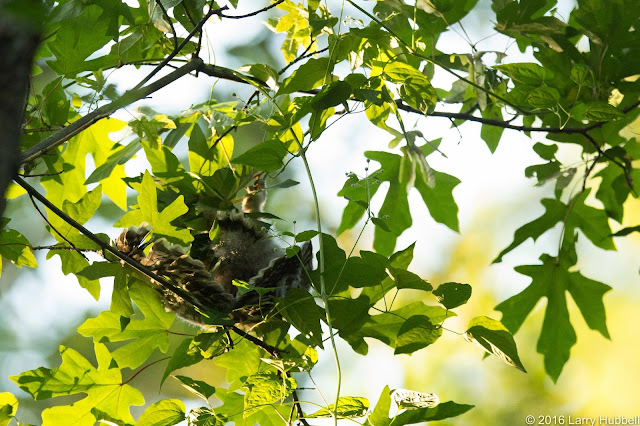 The owlet hung upside down while struggling to right itself for two and half minutes. It felt much longer than that to me. 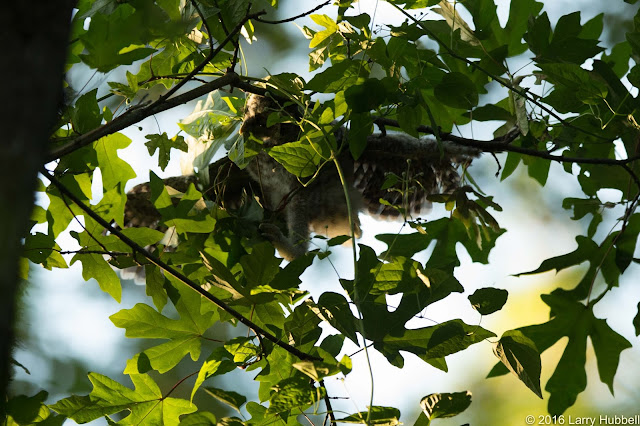 Finally, the owlet found a way to point its head toward the sky. 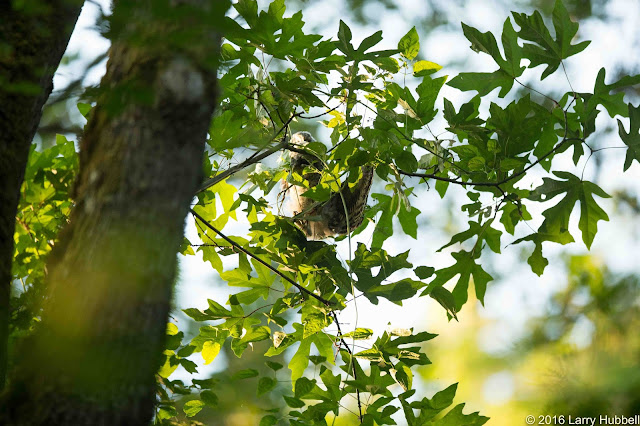 Even so, the struggling continued. 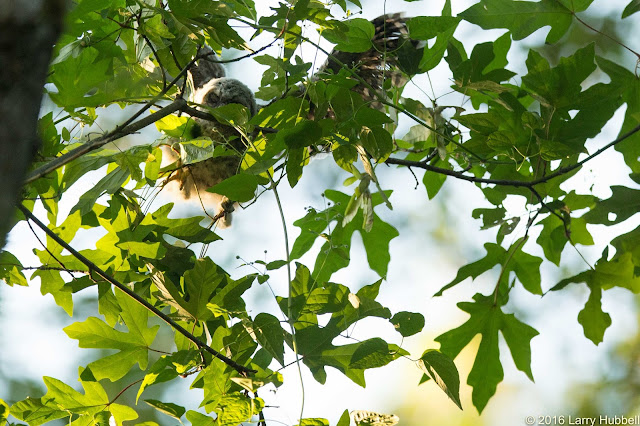 Straining and flapping, the owlet's head slowly rose above the tiny branch. 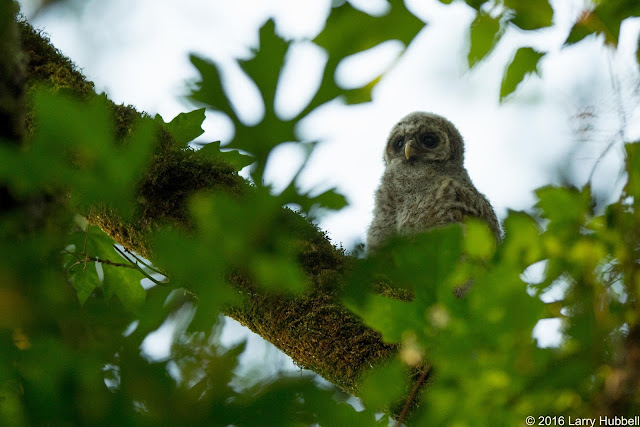 The owlet worked its way to a more substantial branch - secure at last. 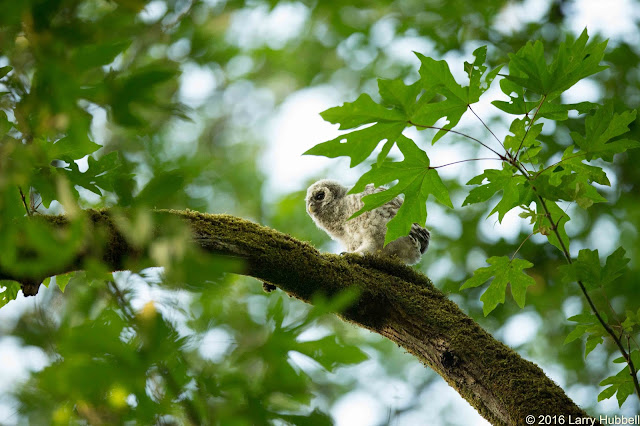 Not ready to rest on its laurels, the young owlet began walking the branch. To my surprise, it once again leaped for a nearby tree. 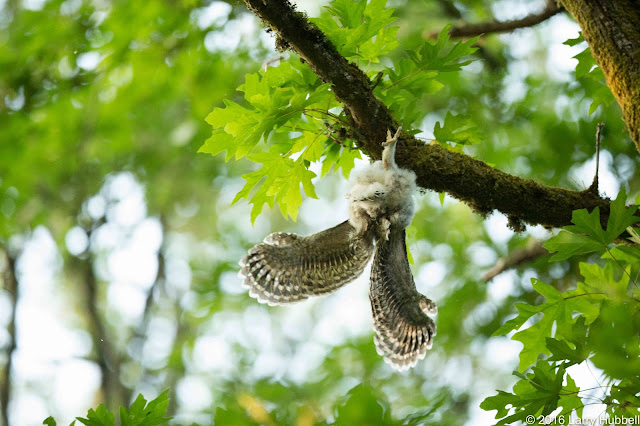 Lacking the experience of an adult, the young bird twists, turns and inverts as it reaches for the branch. 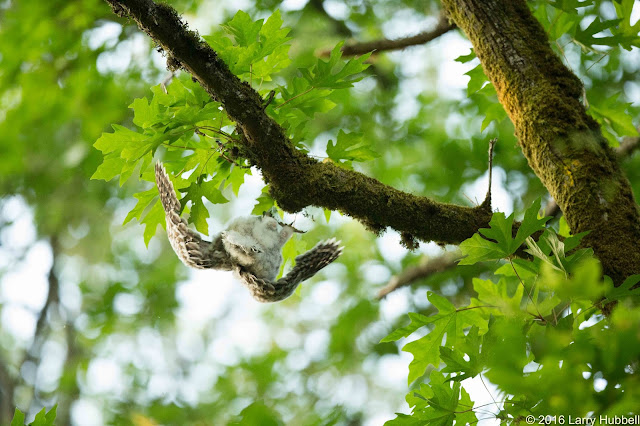 Sadly, it does not complete the connection. 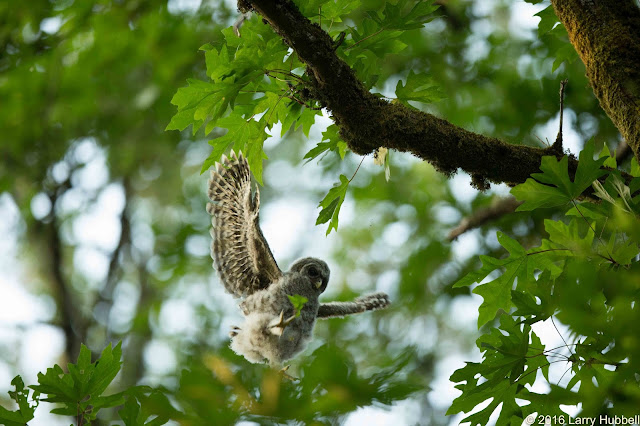 Luckily, its large wings and innate balance help it to right itself in mid-air. This time there were no leaves or branches to easily grasp. The young bird fell all the way down into the bushes at ground level. 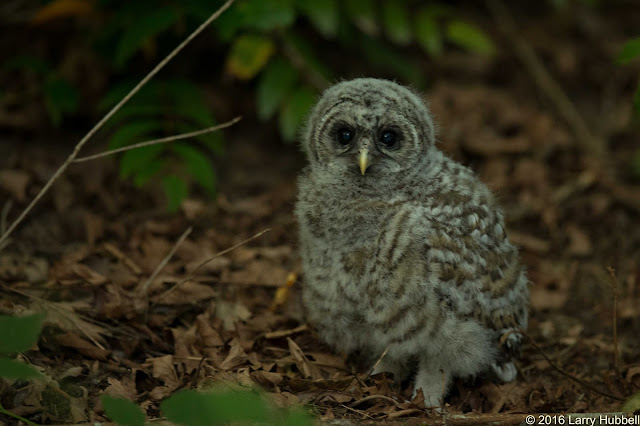 I spent the next week to ten days looking for the two young birds but I was only able to find one and it was always 75 to 80 feet in the air. Usually it was sitting just below the upper foliage of a big-leaf maple tree. Hidden from passing eagles and safe from us earth-bound creatures below. In my mind, I call the owlet in the tree tops Prudence, and the more adventurous young bird Dizzy Dean.

After the fall Dan Reiff, a friend with years of experience, assured me that young owls are resilient and strong. He mentioned that even young owls are very good at hiding themselves and keeping silent, but I still worried every time I saw an off-leash dog in the Arboretum or thought of the coyote which I saw not long ago on the other side of Union Bay.

Two days ago I heard for the first time that both of the young owlets had been seen at the same time. Finally, yesterday evening my wife and I spotted them both. I breathed a huge sigh of relief. They were calling back and forth and flying with ease from one high branch to the next. One of the parents stayed close by and even spent time preening and cleaning one of the owlets.

Dizzy Dean survived his fall and learned to fly. His next great challenge is learning to hunt and feed himself. One thing is for sure, I will never hear the term "Flight Risk" again without thinking of Dizzy Dean.

Have a great day on Union Bay...where owlets fly in the treetops!

Disclaimer: I do not know how to identify the gender of the two young owlets. For all I know, Dean may be female and Prudence could be male. The names I choose seemed to fit their behavior and any relationship to their actual gender is purely coincidental.