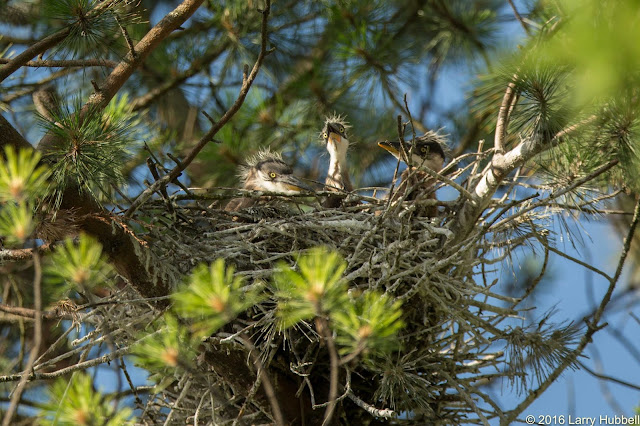 This may be the first photo I have ever published of a great blue heron's nest near Union Bay. The herons usually seem to build their nests in the tops of deciduous trees, like big leaf maples. In the winter time it is easy to spot a colony of nests in a grove of leafless trees. In the spring, when the nests are occupied the maple leaves provide shade and privacy for the young birds, which also makes it harder to photograph them.

The parents of these young herons choose to build this nest in a pine tree. (Thank You to Helen and Tom Cottoner for pointing this out.) The ultimate question is whether this location was a wise choice for the young birds. 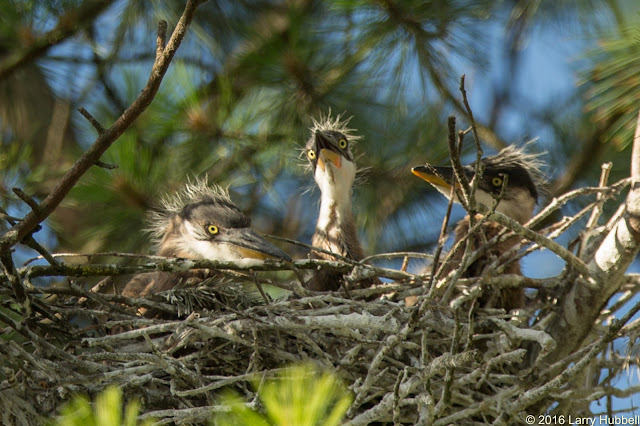 Given the stately elegance of a mature great blue heron, I was a bit surprised to notice the rather awkward, almost goofy, look of these immature birds. 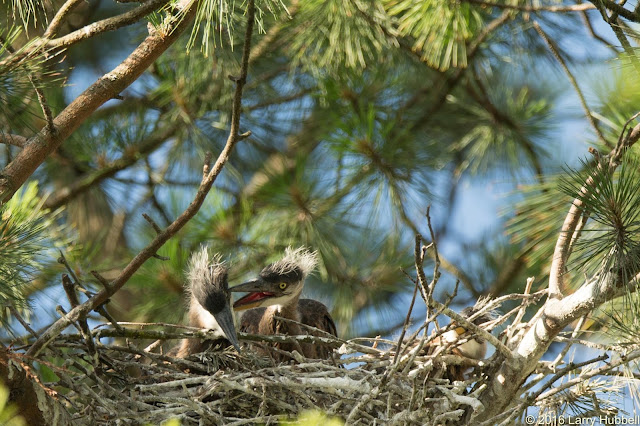 Three young birds with large bills in a small nest can get on each others nerves from time to time. 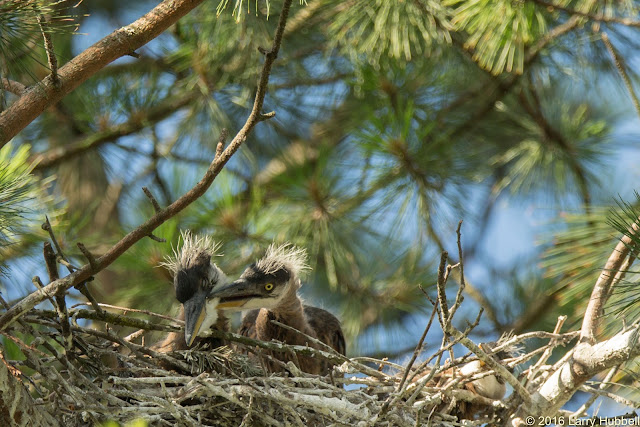 A little nip on the cheek may help to establish an invisible boundary between the birds. Surprisingly, the nip seems to be accepted, almost as if it was deserved, although I wouldn't say that is a happy face. 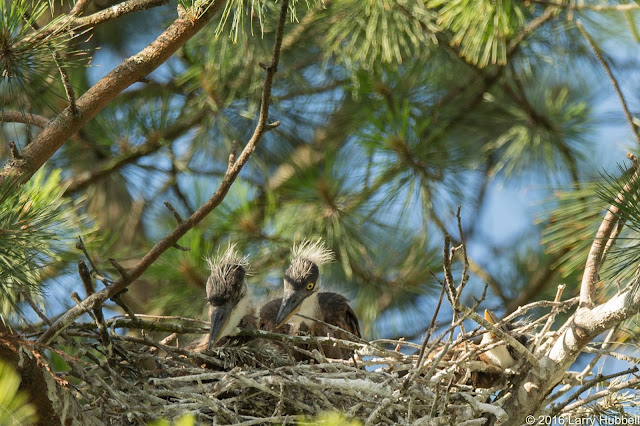 For the moment, all is peaceful in the nest. 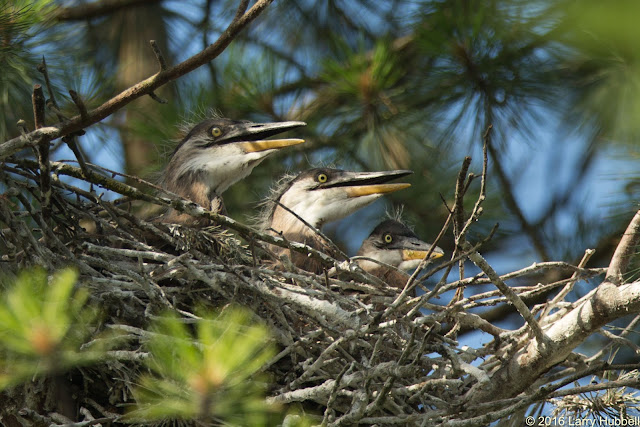 Still unable to fly, the three siblings pay close attention to events unfolding around them on the University of Washington campus. They appear to be students of life. 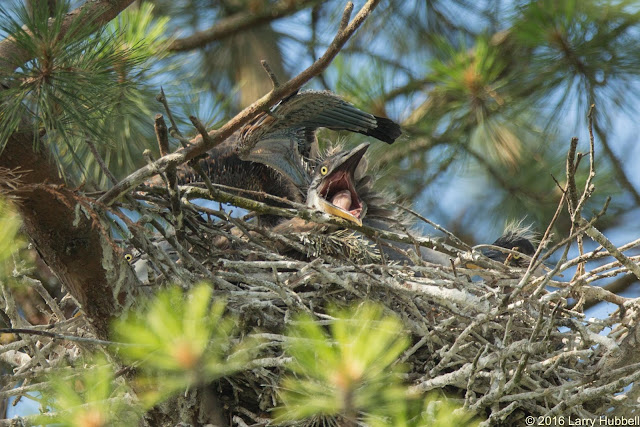 Clearly, one of the siblings has crossed "the line" - that invisible boundary of acceptable behavior. Maybe the bird with its mouth open just caught a toe in the side or a beak in the bum. It is impossible to see what happened but the reaction is obvious. 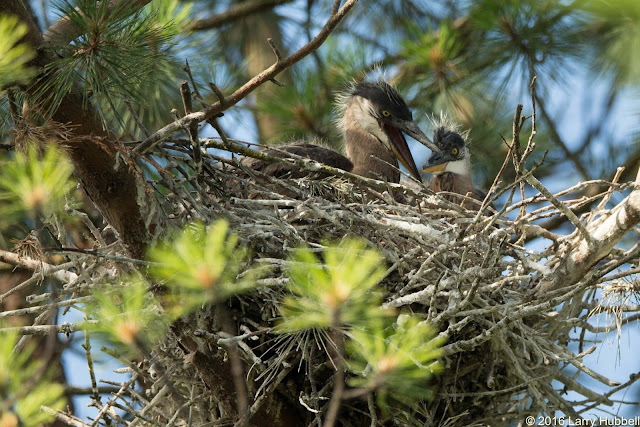 With the noise of students and buses passing, I could not hear what sounds were being emitted. It sure looks like the offended bird is attempting to educate its sibling on the finer points of nesting etiquette. 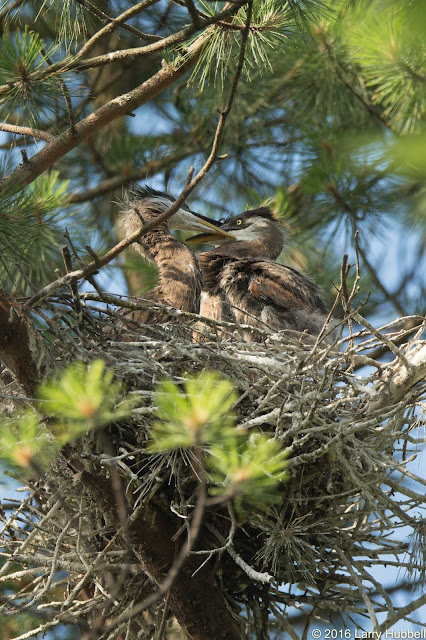 The teacher takes more of a "hands-on" approach. 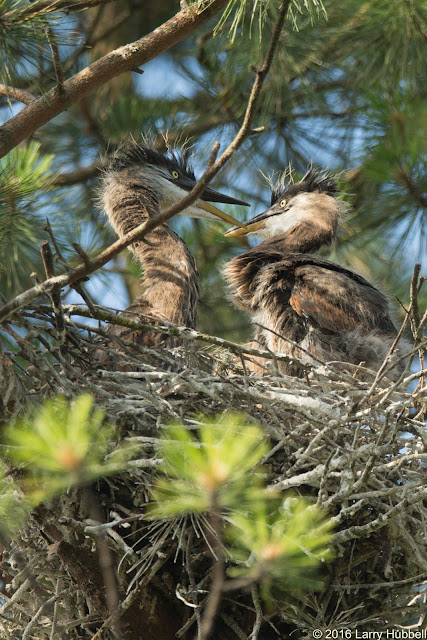 The handy spikes on top of the head shows the student is paying attention. 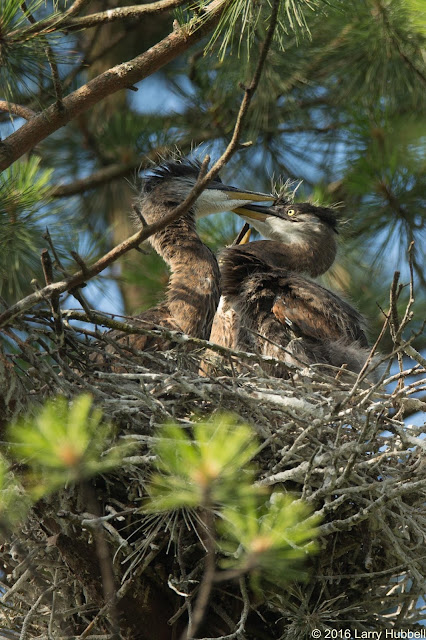 The third sibling appears ready to play the role of assistant teacher. 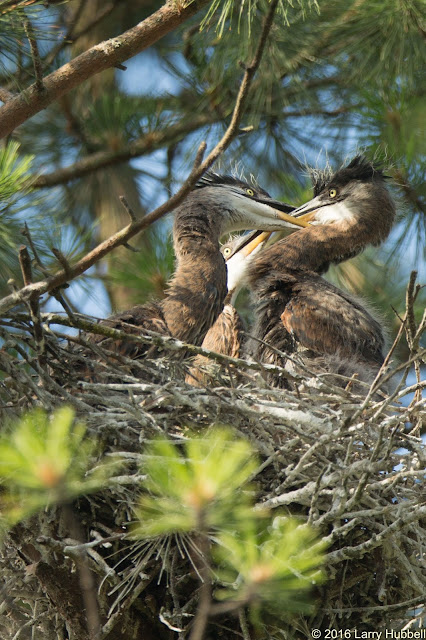 Repetition is the key to learning, so the message gets delivered again. 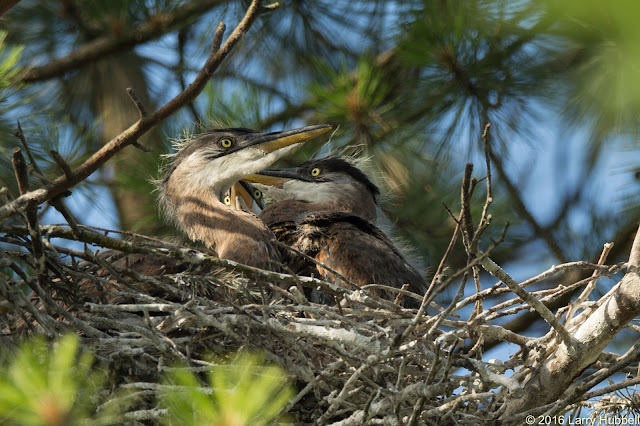 The offended bird finally seems satisfied and ready to take a breath. 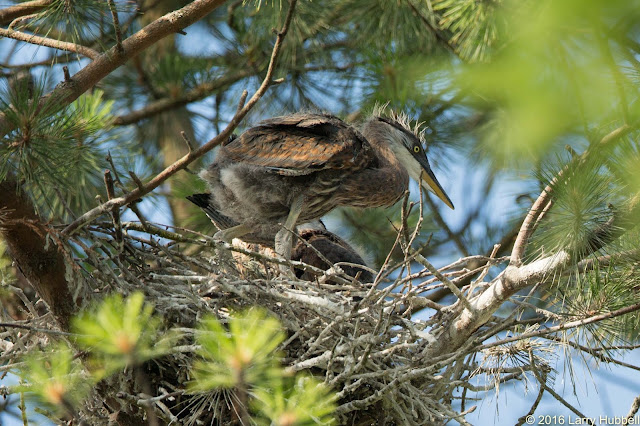 Looking for a quiet corner of the nest seems like a wise move. Notice the almost complete lack of a tail. Evidently, there is no point in growing a tail until the flight feathers are functional. 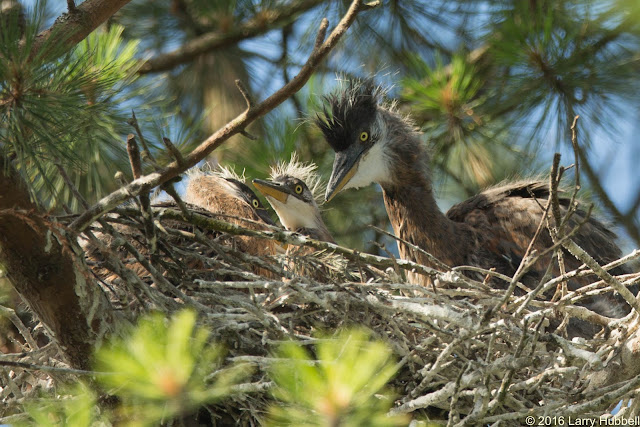 Of course a round nest has no corners and fairly soon the three young birds are face to face again. 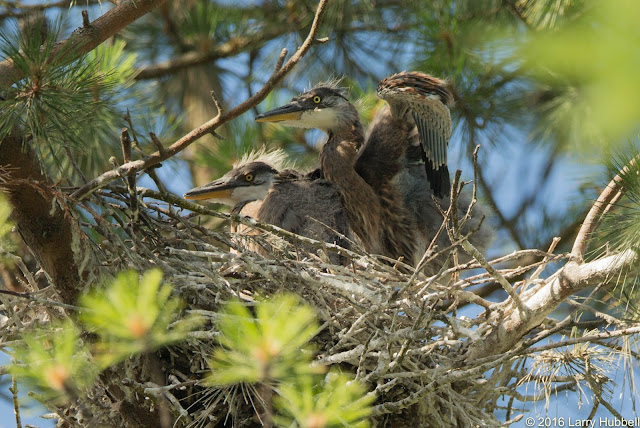 When one bird lifts its wings, it is easy to see the partial development of the primary flight feathers. These partially developed feather shafts are sometimes called pin or blood feathers. While the feathers are growing, the shafts contain blood that supplies nutrients and enables the growth process. Once the feathers are fully developed, the blood flow stops and the feather remains. It will take a while before these birds are able to fly. 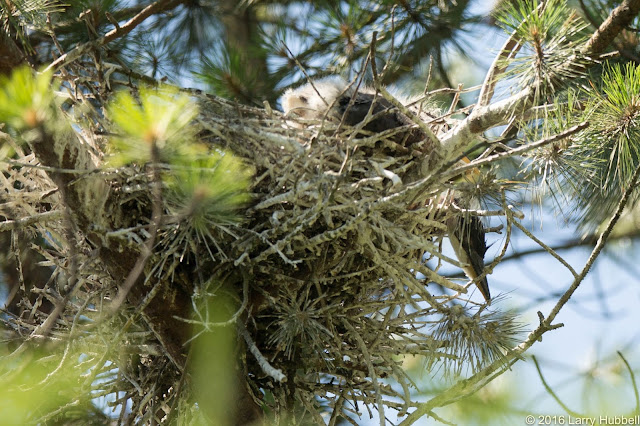 At mid-day, with the sun beating down and the temperature nearing ninety, one of the young herons takes evasive action. I am convinced it was hanging its head over the side in search of shade. 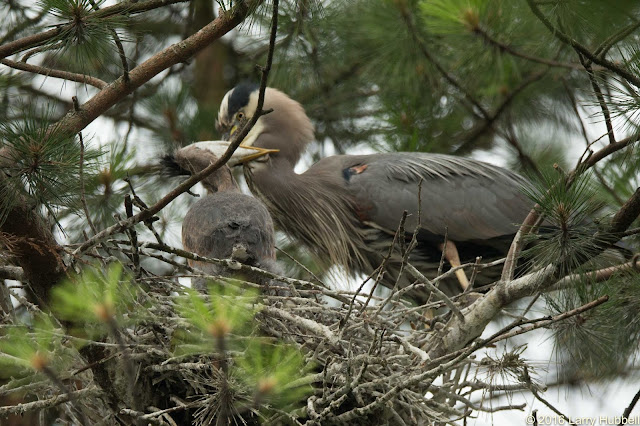 I returned in the cool of the morning hoping to find a parent at the nest. The young bird excitedly searches for food. 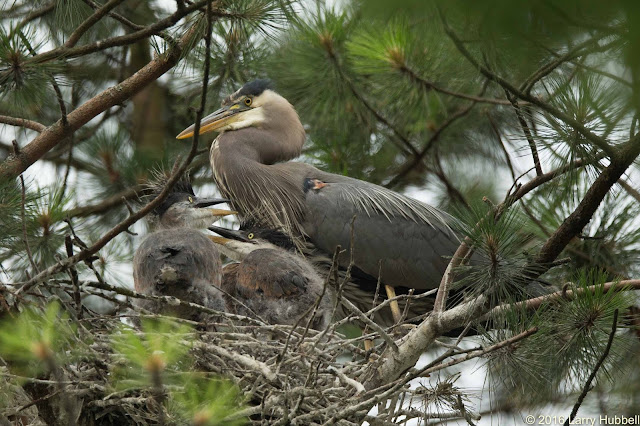 The size comparison between the adult and the young is another indication that more development is required. I believe the young will be nearly as large as the parents before they fledge, and leave the nest. 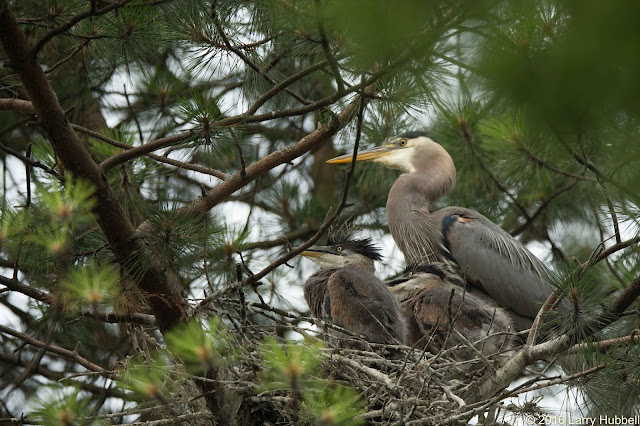 The top knots or crests on the young seem very unruly. In the first photo it looked like only white feathers were erect while in these photos it is the dark blue feathers that show up. The angle of the light may be a factor. 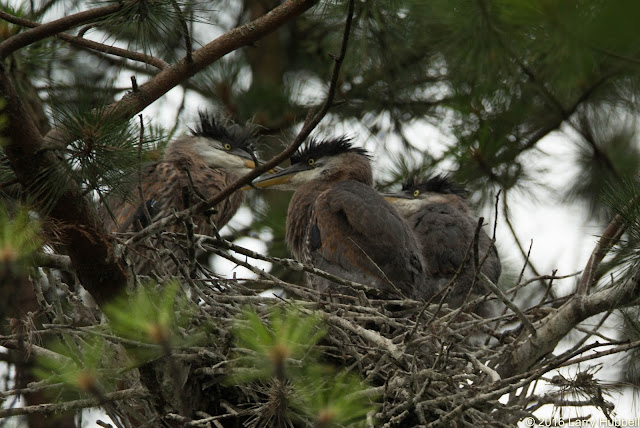 Helen mentioned, that a few years ago a loud concert at the University of Washington caused the herons to abandon their nests in the middle of spring. Apparently, none of the young survived. Another friend told me about a heron rookery in Interlaken Park many years ago that was raided and destroyed by a pair of bald eagles - no doubt with young of their own to feed.

Our young students have no idea of the challenges they will face. This site is slightly removed from the other University of Washington nests. It seems like a quieter location. It may also be more visible, and hot, without the shade of the big-leaf maples. Just like with humans, every choice has tradeoffs. We can only hope that their parents have chosen wisely.