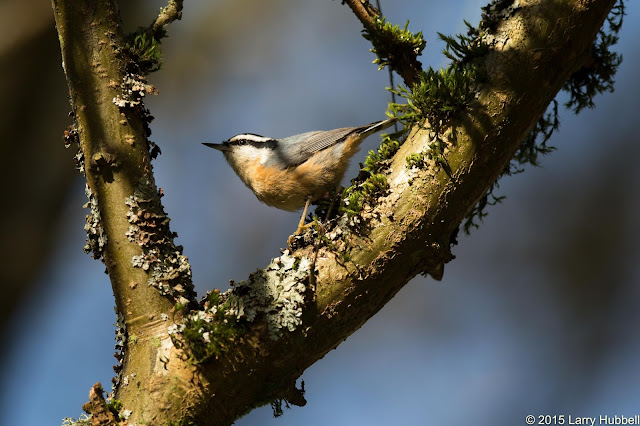 A red-breasted nuthatch is a beautifully balanced bird. At less than five inches long and weighing around half an ounce you might expect nuthatches to be shy and bashful. They are not! The nuthatch song is a loud, heart-felt and distinctive, "yank, yank, yank". 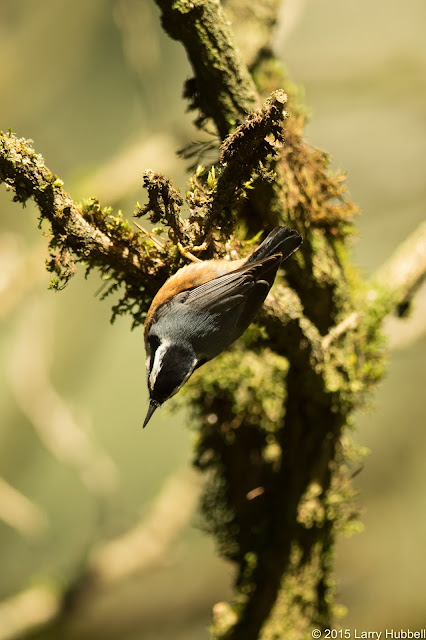 Its agility and derring-do makes it a delight to behold. 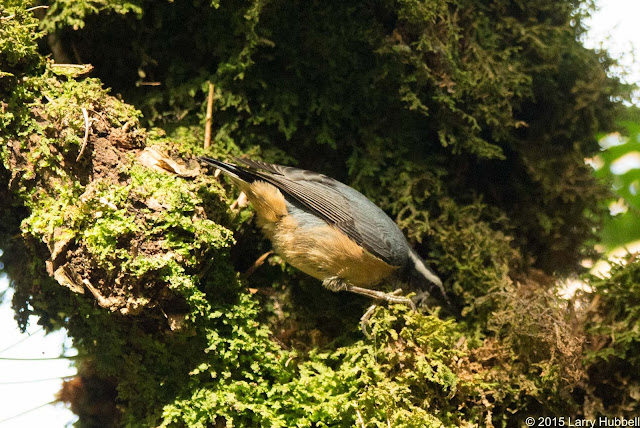 Its incredibly balanced body plan can be misleading. A predatory bird might have difficultly determining which end to attack. Assuming, a predator could actually catch up with a nuthatch. 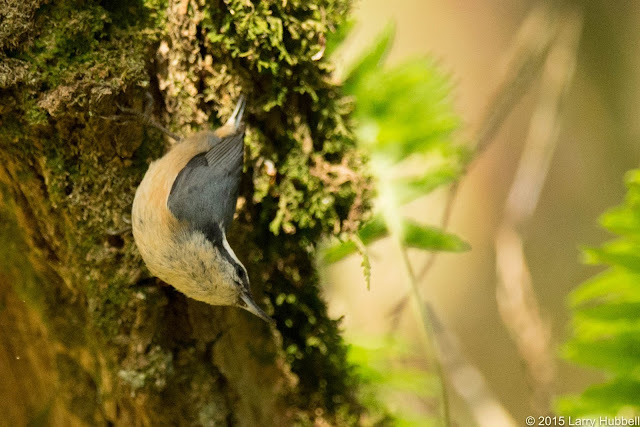 From the nuthatch's perspective, gravity is irrelevant. 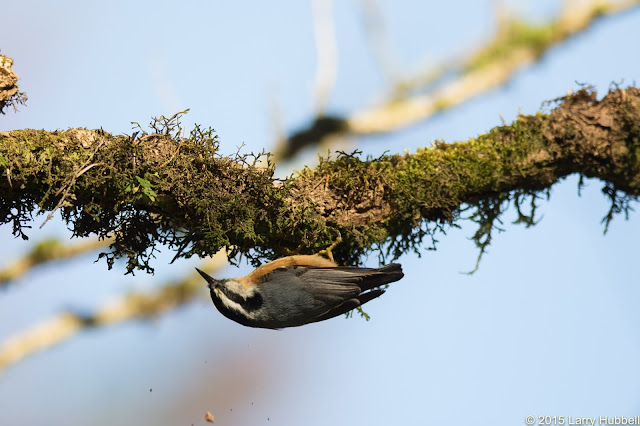 Their strength to weight ratio must be incredible. If a nuthatch was a human, it would certainly we be a rock climber, and from a musical perspective, it would no doubt, be a rock musician. You can listen to its song by clicking here, and then scrolling down. 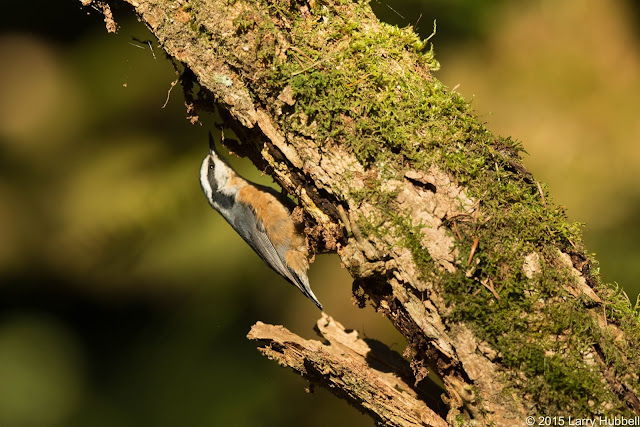 For insects and bugs, no place is safe. 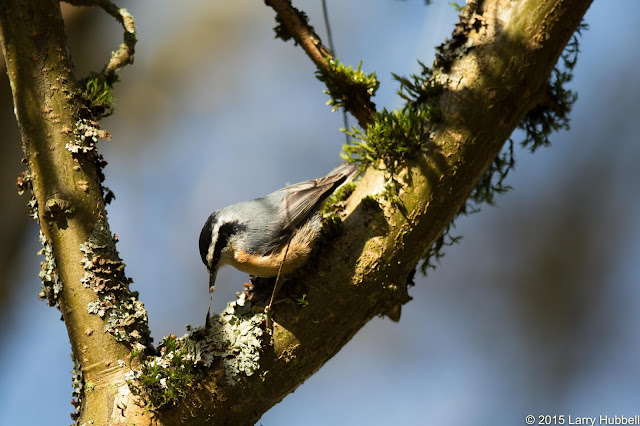 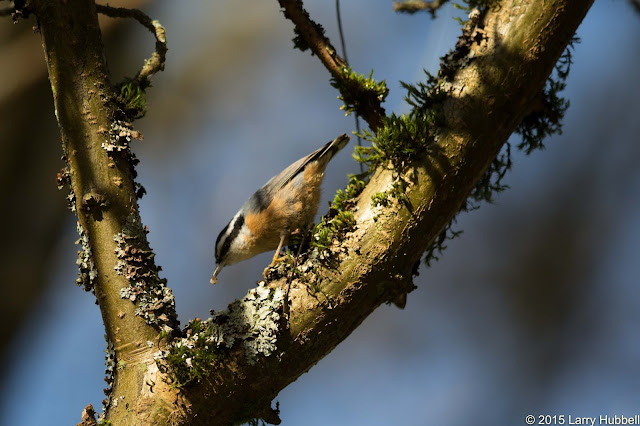 Once a nuthatch clamps on, you are food. 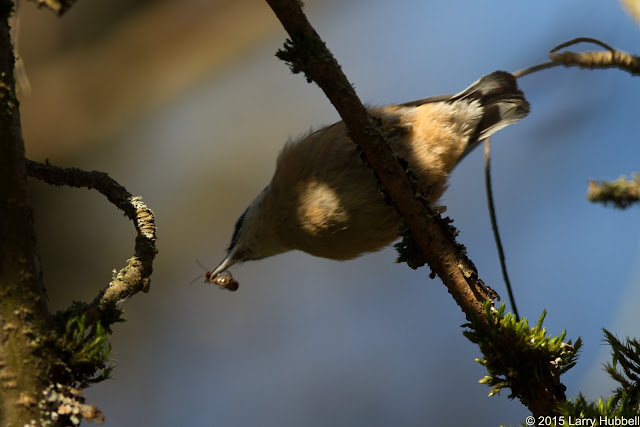 Even an earwig's pincers, do not deter a nuthatch. 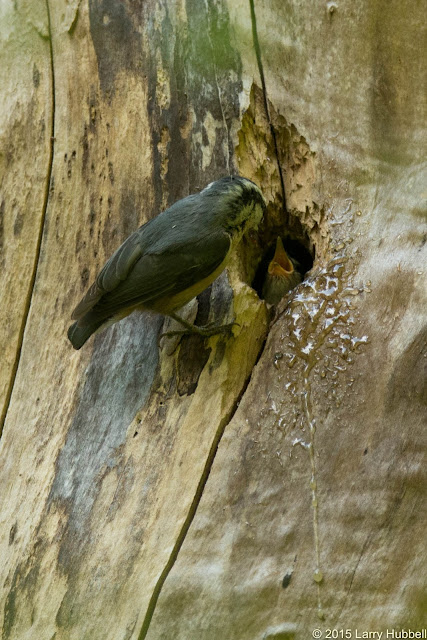 In Spring, when a parent returns with food a young bird is ready and waiting. There are a number of fun facts about nuthatches that this photo brings to mind. Like many other birds the young nuthatch has a yellow beak while the adult's is black. The yellow color makes a nice target in the darkness of the nest hole. 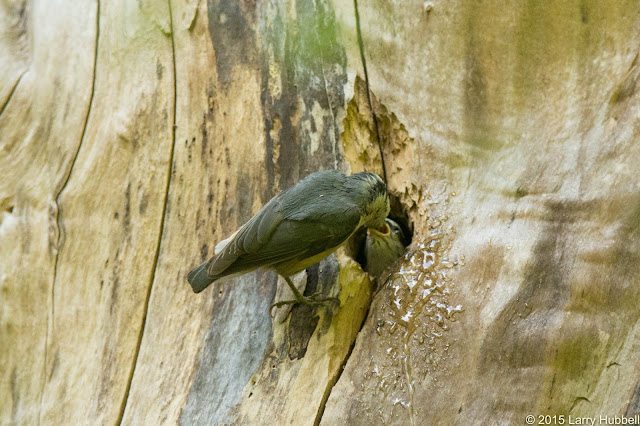 By looking at the beak-sized indentations above the nest, you can surmise that the nuthatch excavates like a woodpecker. However, the nuthatch lacks a long tail so it does not have a woodpecker's leverage. This means very soft old snags are critical nesting sites for nuthatches.

Even the stronger and longer-tailed woodpeckers prefer softer wood. It can take many years for the wood of a dead tree to reach the proper, cork-like consistency. Plus, many times the branch or trunk holding a new nest will crumble and fall before it can be used a second time, which is why it is so important to leave dead trees standing, in our yards and parks. 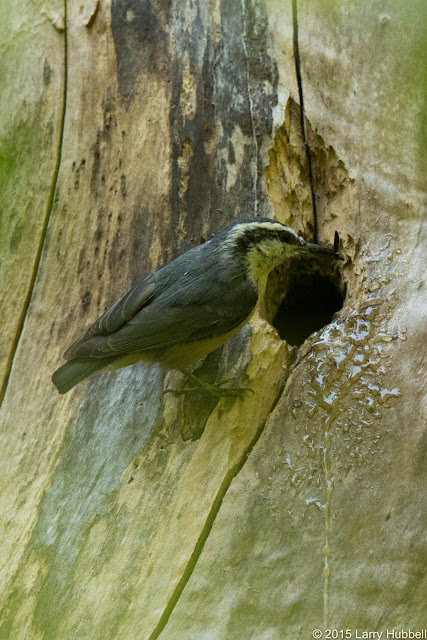 Here the adult is holding a dark, black bug while it waits for a young bird to secure the prize. All About Birds says, a nuthatch clutch may include from two to eight eggs. Being unable to peak inside the nest we have no idea if we are seeing the same young bird in each photo. It could be a free for all inside with a half a dozen nestlings fighting for their window-of-opportunity. 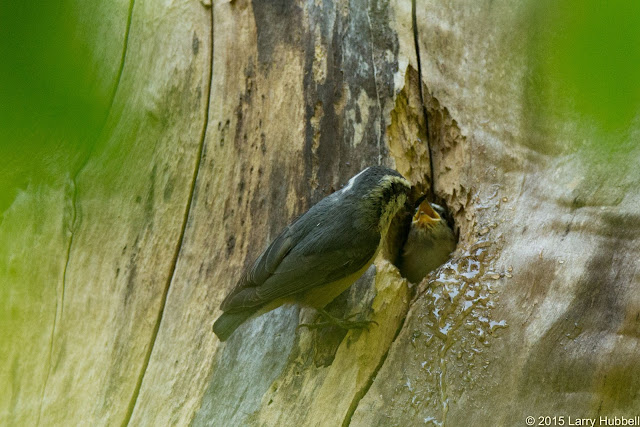 Another fun fact is the sap glistening on the outside of the tree. This tree is very old and dead. Its sap stopped flowing long ago, however, this sap is fresh and clean. Nuthatches secure the sap from living trees and then paint it around the entry way. Apparently, this is a defense mechanism to deter predators. 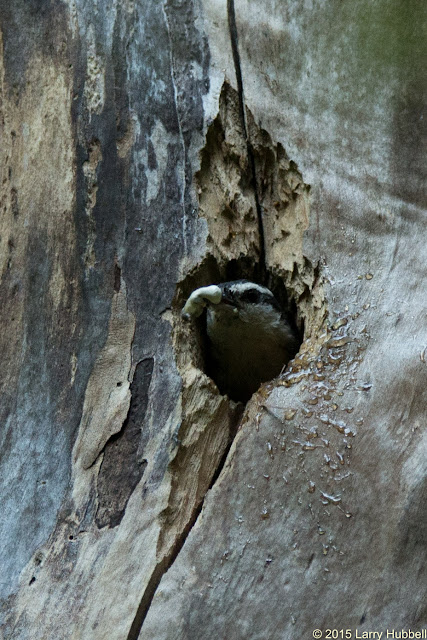 The adults remove fecal pouches from the nest, in order to keep the inside clean and tidy. 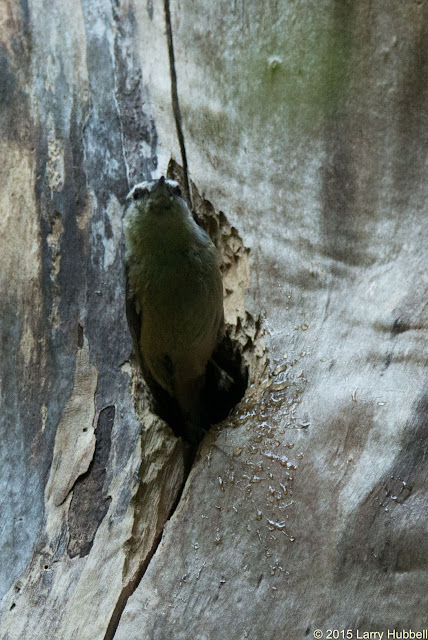 To keep their feathers from getting sticky they must spring through the entry hole without extending their wings or brushing against the sap. 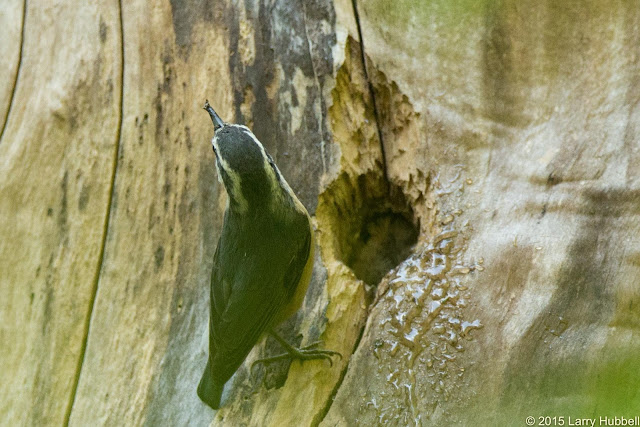 As the young birds get older they learn to turn around, in order to deliver a fecal sac after eating. 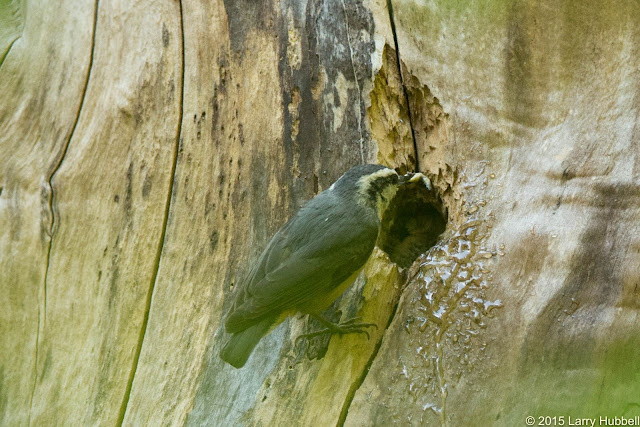 This keeps the parents from having to squeeze into the confines of the nest. 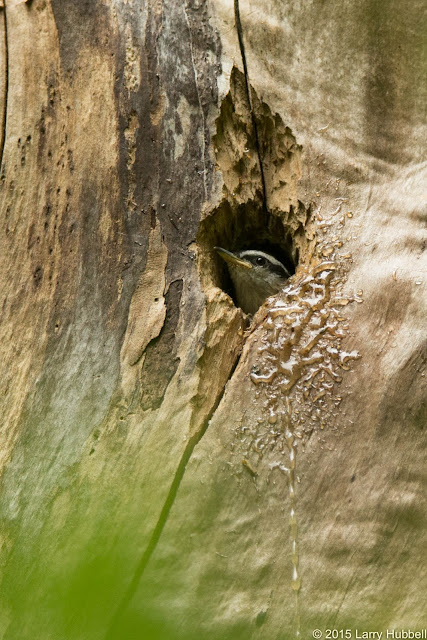 As the young birds mature they begin hanging out at the window and calling out for food. Their call is very similar to the "yank, yank, yank" of the parents, but it has a thinner more reedy sound. 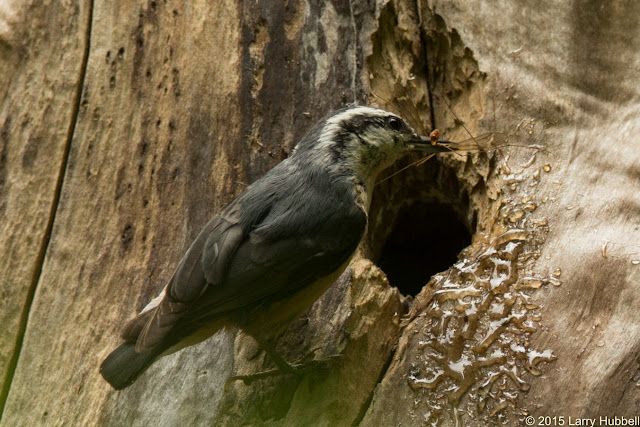 In this case, it appears the parent has returned with the crumpled remains of a crane fly. 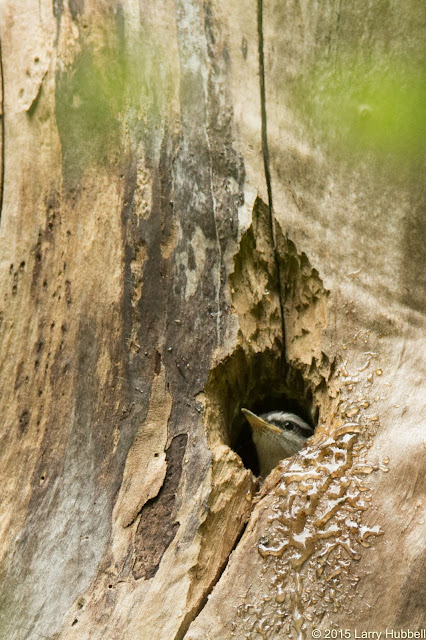 In the Spring, no matter how fast the parents deliver food it seems like there is always another young bird waiting. 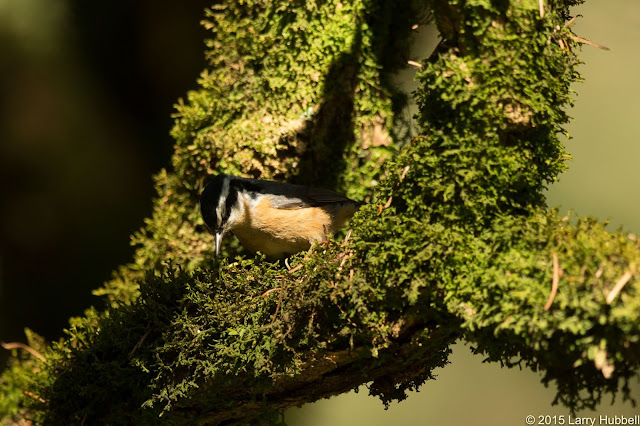 This time of year, the reddish breast of the nuthatch against the green moss... 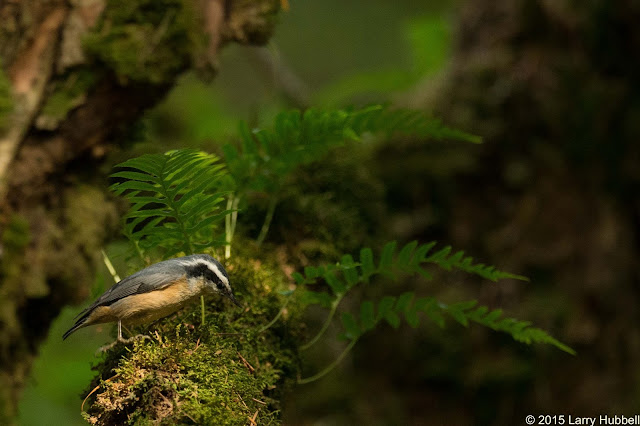 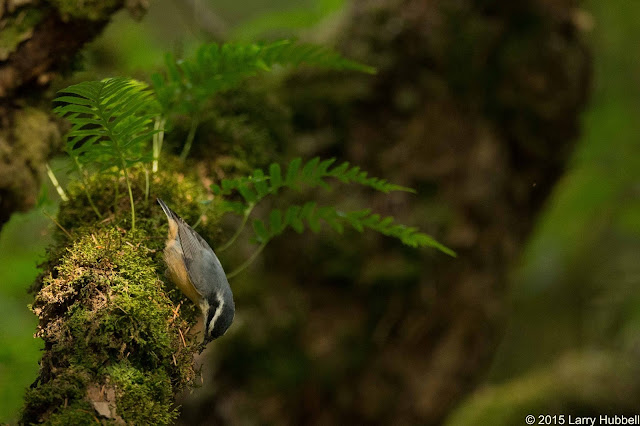 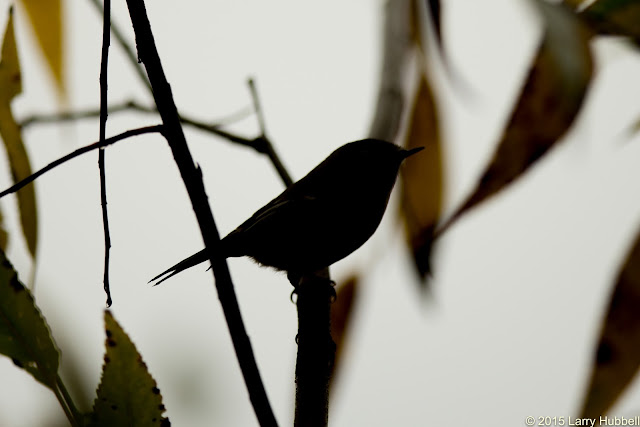 This silhouette could be one of two common birds around Union Bay, however they are both part of the same genus and family. Can you guess their common name? The answer will be at the end of next week's post. 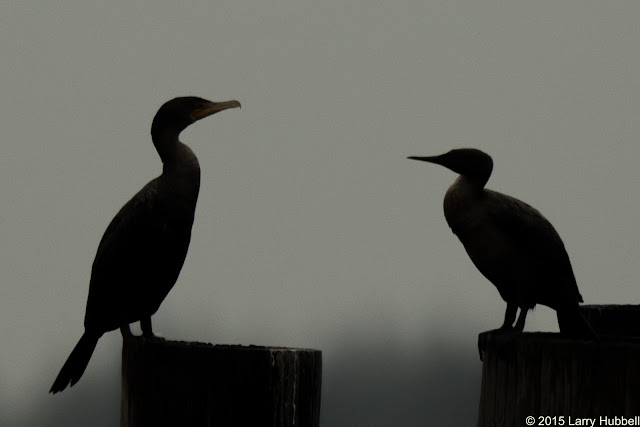 This was last week's challenge. The bird on the left is a double-crested cormorant, which is very common around Union Bay, often sitting with wings outstretched. The bird on the right is a pelagic cormorant, which is not common around Union Bay, since it prefers salt water. The smaller, thinner beak is a distinctive difference.