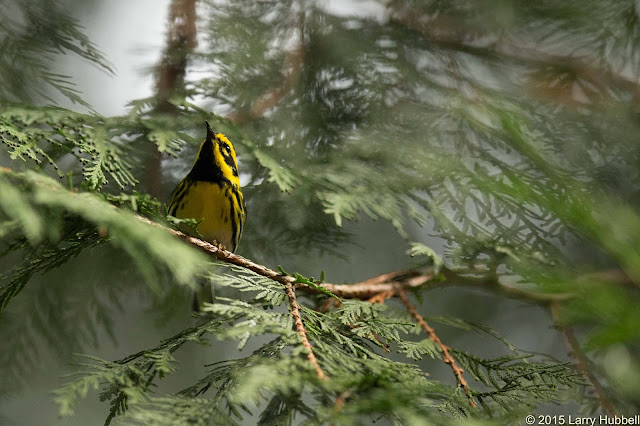 Depending on which source you consult, there are 40 to 50 different types of warblers found in the western part of North America. Only eight types are annual visitors to Union Bay. Of the eight, only three are year-round Puget Sound residents.

We are extremely lucky that the Townsend's warbler is one of these three birds. The majority of the North American warblers have some yellow on their head or body. However the male Townsend's warbler has the most strikingly brilliant combination of yellow and black.

Note: The female Townsend's has a yellow throat instead of black, and elsewhere around the head where the male has black coloring, the female has olive green. 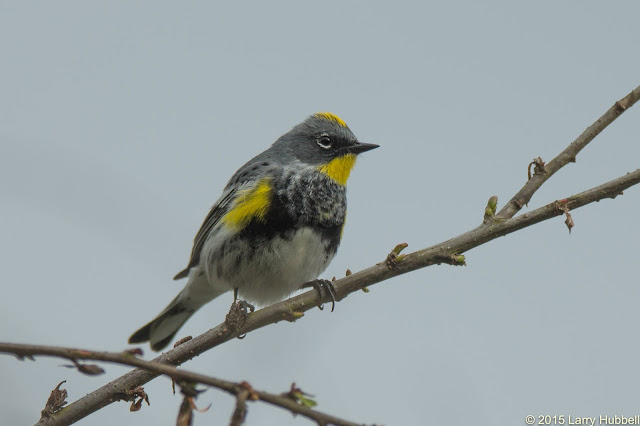 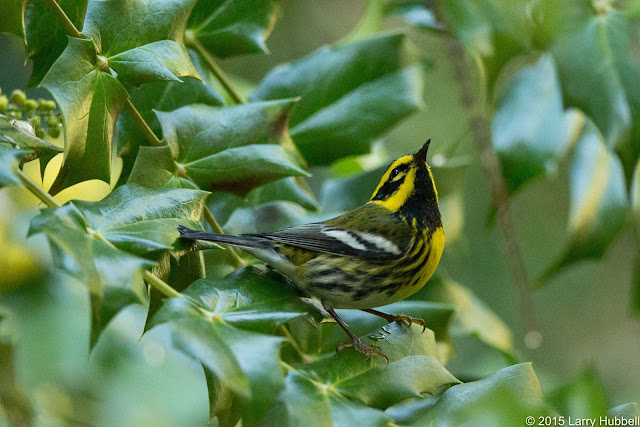 ...however it pales by comparison. Our good fortune in having the Townsend's warblers year round is due to our unique location. We are at the northern tip of the Townsend's winter range, which extends as far south as Central America. Just to our south, Oregon hosts the southern tip of the summer range. Prior to breeding, Townsend's migrate north between the Pacific and the coastal mountains, all the way into Alaska. The bottomline, we are in a relatively small area where the summer and winter ranges overlap.

BirdWeb, which is a free resource provided by Seattle Audubon, has the most detailed Townsend's range map for the state of Washington that I have seen. 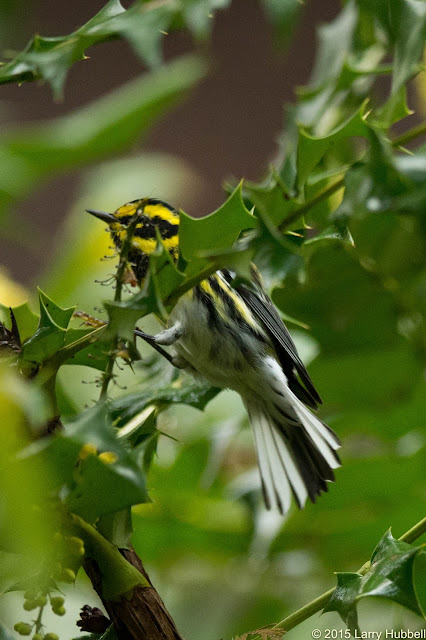 The Townsend's prefers to breed and often feed near the tops of conifer trees. When it does descend to feed near humans it tends to be fairly shy and is often hidden behind flowers or leaves. Its song and call are fairly soft and high pitched, which makes the sound easy to miss. Click Here to visit All About Birds, then scroll down to play their song.

In spite of its brilliant color this little warbler is very easy to overlook. I usually spot it by noticing the flicker of a somewhat heavy motion deep inside a bush. By comparison, hummingbirds dart far more lightly between the flowers. 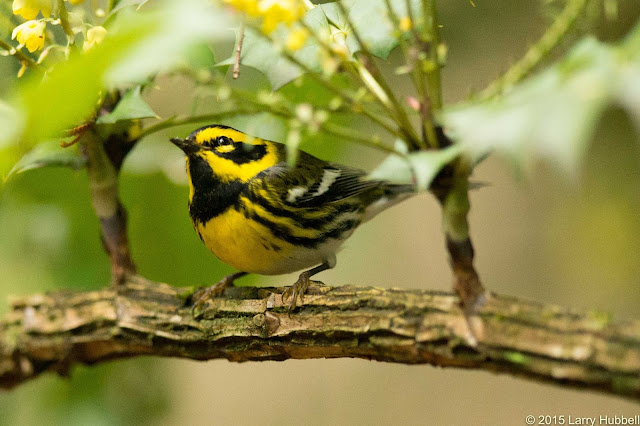 During the last couple of weeks I have been lucky to see this warbler a number of times. Given the bird's consistent behavior I am starting to feel like I know this particular bird. In my head I call him, Port. I do realize that the bird and the town were named after different people. Port Townsend was named after the Marquis of Townshend, while the bird was named by (or for) the ornithologist, John Kirk Townsend. If you would like to make your birding friends laugh, be sure to call this bird a Port Townsend's Warbler. 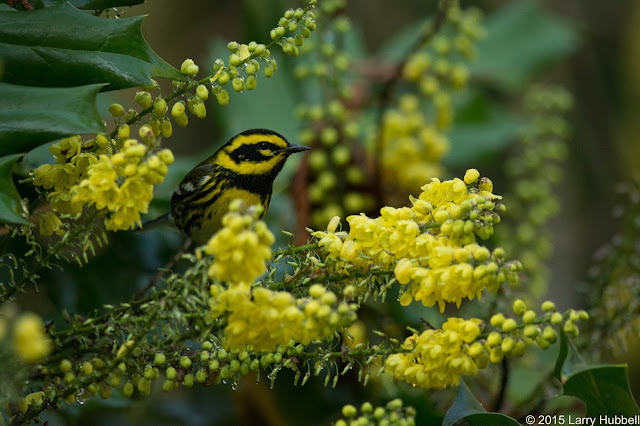 Port seems to have found something tasty to feed on among these winter blossoms. 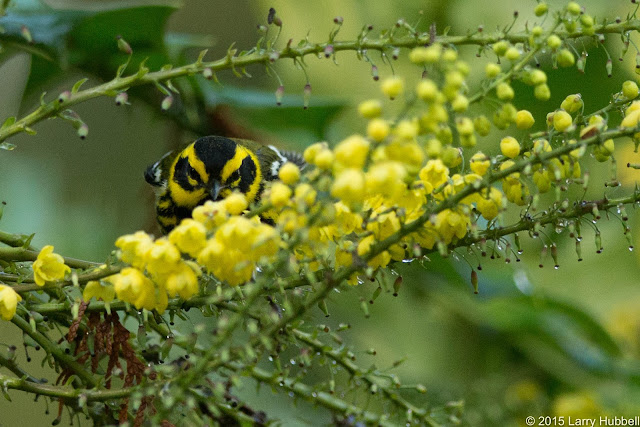 Initially, I suspected the flowers were attracting insects which in turn attracted the warbler. 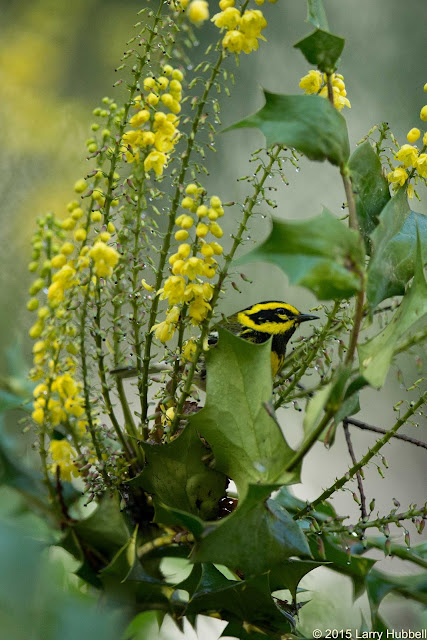 However, I have yet to take a photo which displays the warbler eating any creature at all. 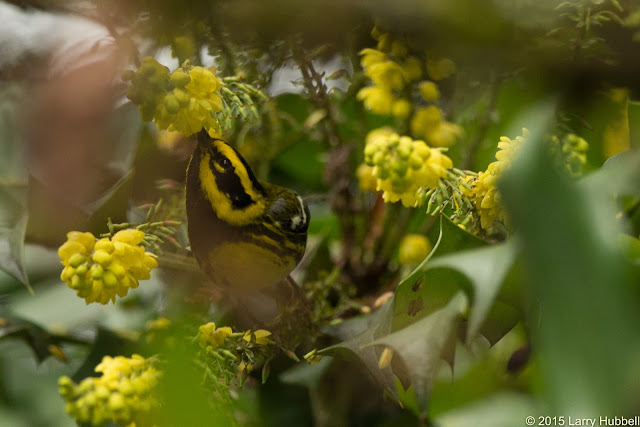 I have seen it reaching up into the flowers. 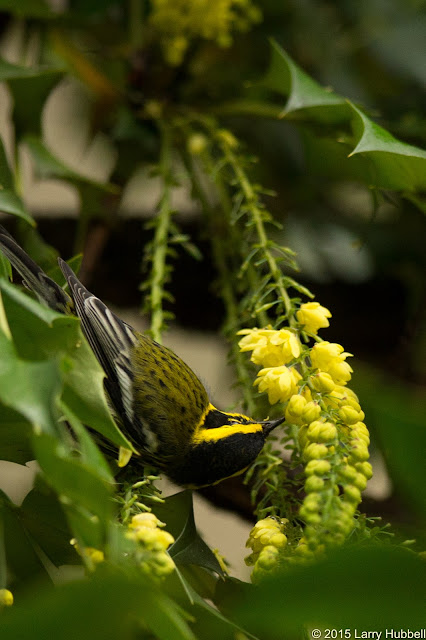 I have watched it stretching down and around the flowers and... 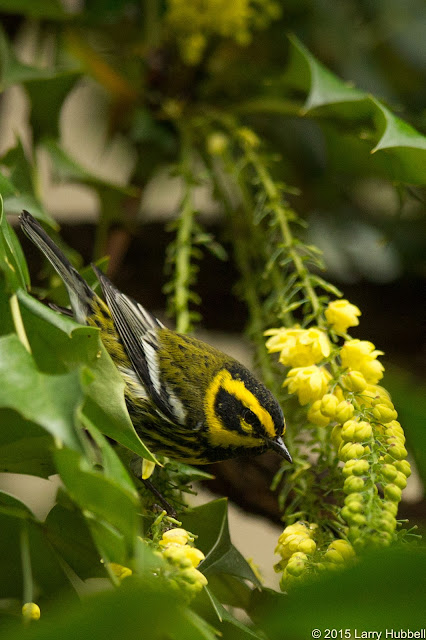 ...then photographed it as it pulls back afterwords, but I have yet to see the slightest sign of a bug or insect being consumed. 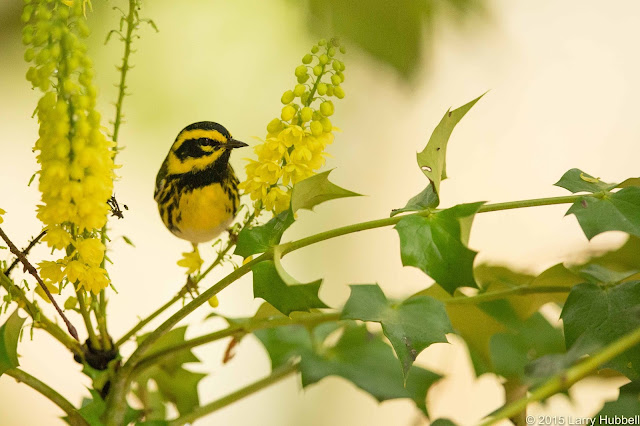 I am beginning to wonder if this bird is mimicking the Anna's hummingbirds and directly consuming pollen or nectar from the flowers. 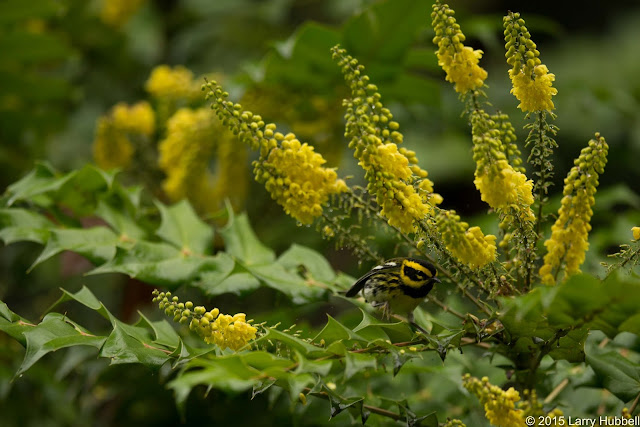 In any case, the yellow flowers provide excellent cover and a wonderful backdrop for this beautiful little bird. 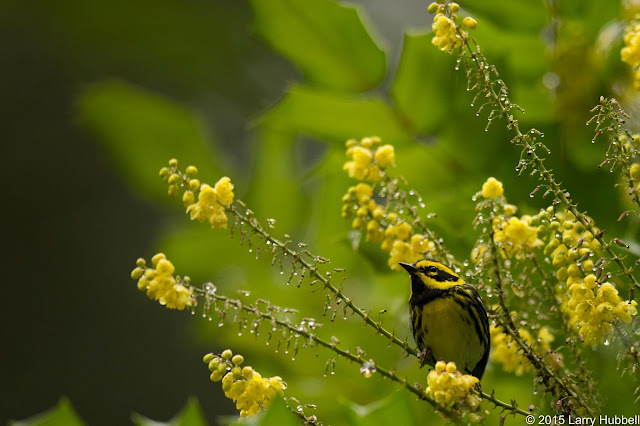 The birds and the rain are definitely removing the blossoms, still I hope this warbler lingers among the flowers for as long as they last. The combination of winter blooms and the brilliant black and yellow bird puts warmth in my heart and a smile on my face. 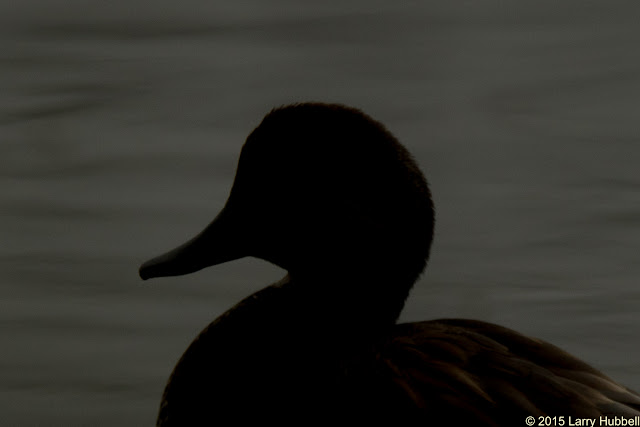 Last week's silhouette is of a fairly common duck found on Union Bay. For a comparison take a look at the next photo which is of a mallard, our most common duck. 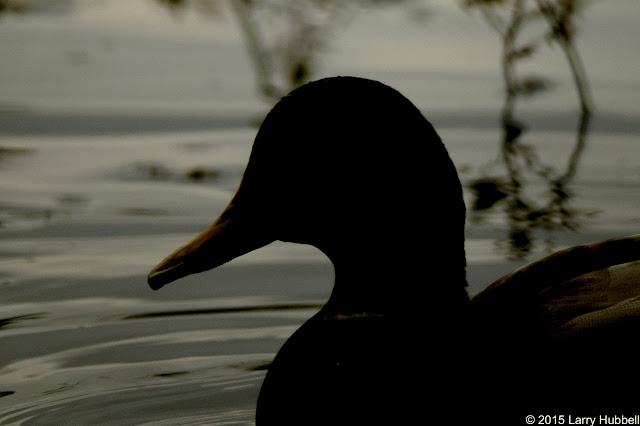 Notice how our mystery duck has a taller forehead and a more delicate beak. In general I seldom notice the specific differences. I just glance at the outline and think, "That duck sure has a pretty shaped head." If you guessed Gadwall, you are correct! 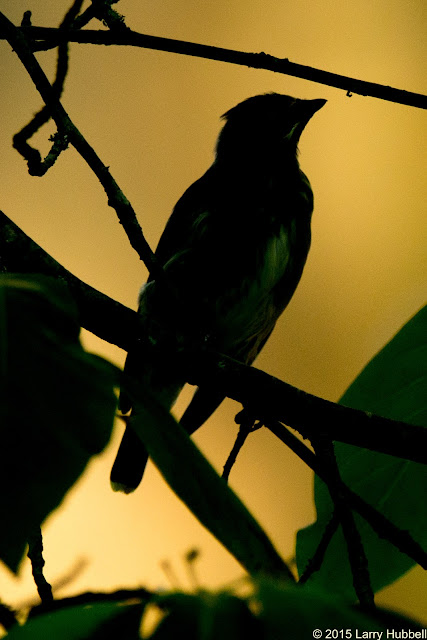 Can you guess which type of bird this silhouette belongs to? The answer will be in next week's post.