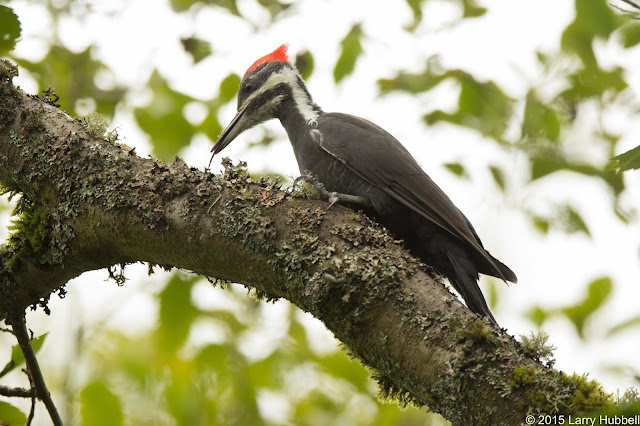 Yesterday, while listening to the raucous cries of a blue jay, I heard a pileated woodpecker call in the distance. The jay sounded very excited, I suspected it was warning the world about the young barred owl that we saw in last week's post.

My dilemma was similar to the old saying, "A bird in the hand is worth two in the bush." However the last time I remembered photographing our local pileated woodpeckers, Elvis and Priscilla, was when Elvis Jr. left the nest back in June. I have been wondering how they are doing, so I choose to look for the birds in the bush. 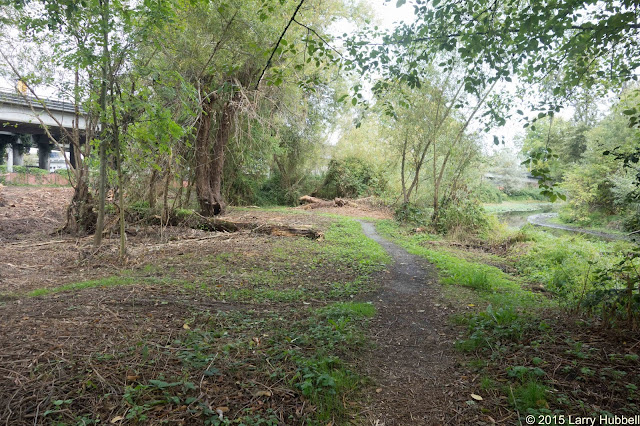 The pileated cry sounded like it came from the area near Elderberry Island. In this photo you can see a glimpse of the island on the right, while on the left, the eastbound 520 on-ramp connects from Lake Washington Blvd to the bridge.

I was surprised to find the invasive blackberries had been mowed to the ground, but happy to find that native trees, like the willow, the alder and the western red cedar, were left intact. As I glanced around I heard the pileated call again. This time the sound came from Oak Point, which is my name for the oak-covered peninsula east of Elderberry Island and west of Duck Bay.

I jogged around the island in time to spot Priscilla sitting at eye level in fairly good light. I lifted my camera to photograph her and found my battery had expired. Priscilla flew towards Duck Bay, while I fumbled for a fully-charged battery. Evidently, while I searched the area around the bay, Priscilla circled back near Elderberry Island. 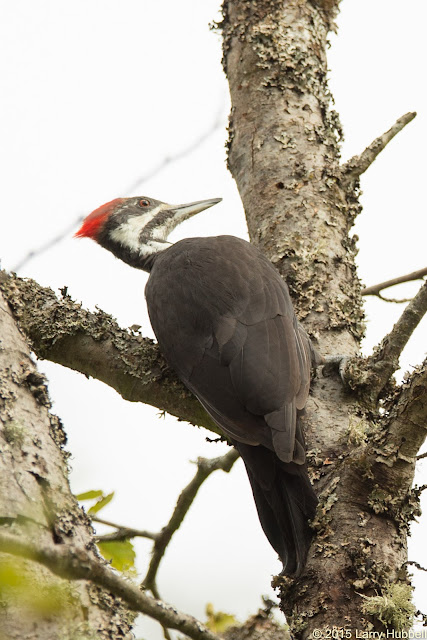 Later, while following the sound of her occasional calls, I discovered that she was nearly back where we started. 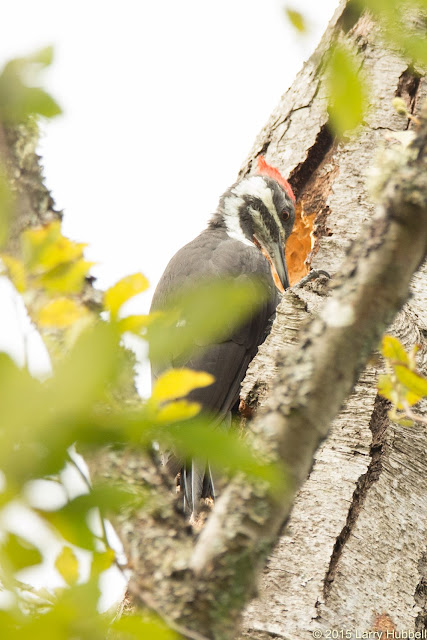 Priscilla settled down and began excavating for ants in the side of a rotting red alder. 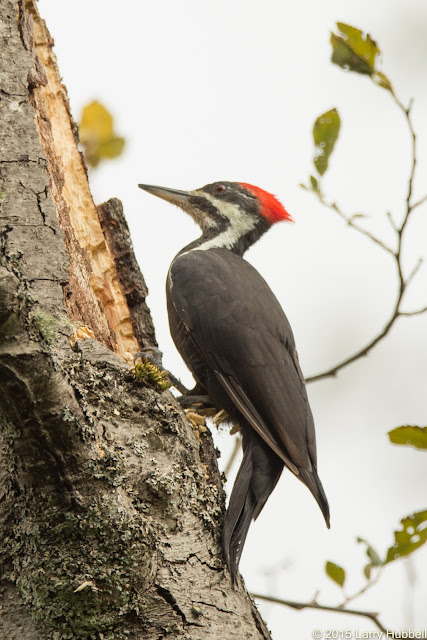 During the next half hour, she opened up a vertical slash four inches wide and three or four feet long. 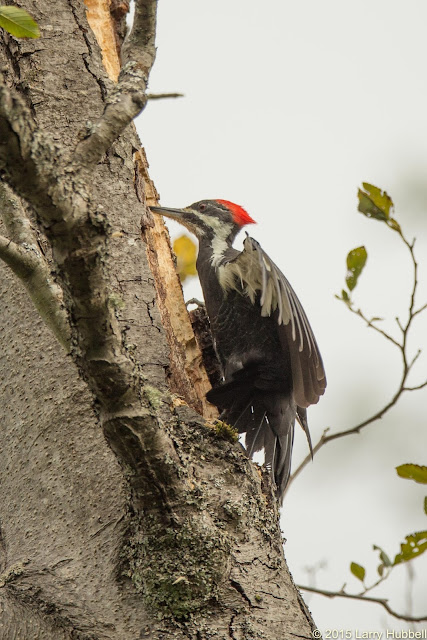 After a while, her wings apparently felt a bit stiff. 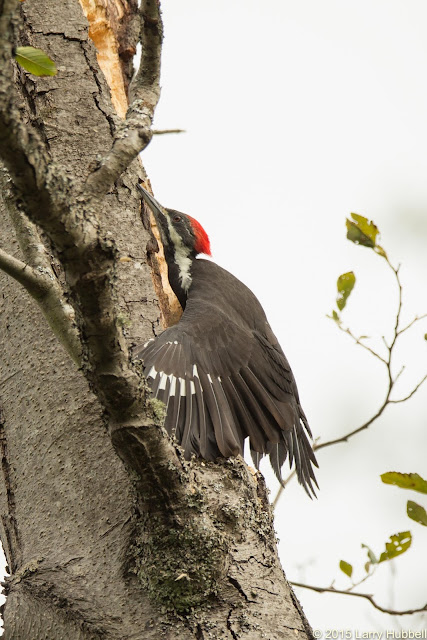 As she stretched around the tree, she leaned in close for balance. This same tree-hugging position is also an effective way to hide whenever she senses danger overhead. 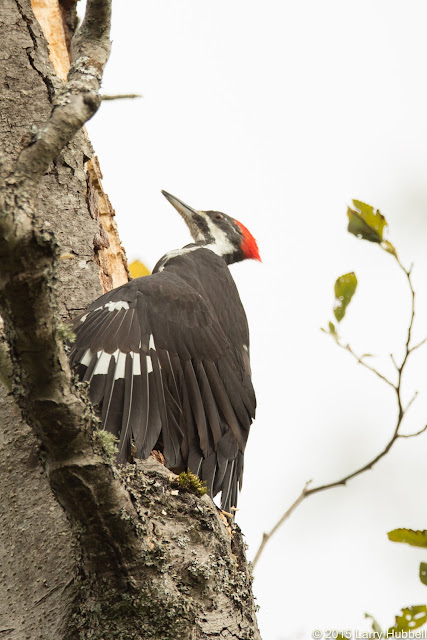 In this case, she leaned back from the tree... 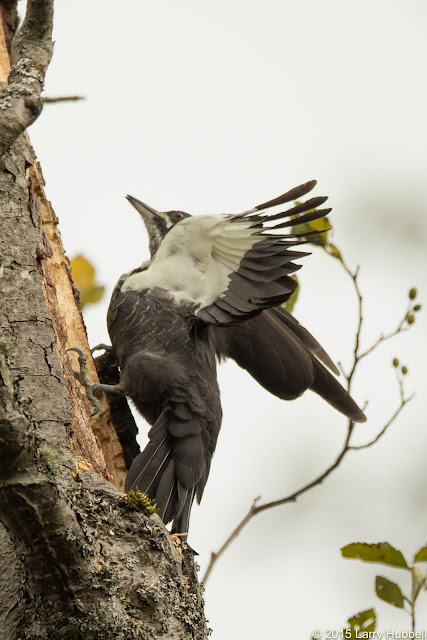 ...and lifted her wings before returning to work. While looking at this photo, I remembered a few years ago spotting a feather on the ground that was half white and half black. At the time I was uncertain what type of bird lost the feather. It seems obvious now that it was from the wing of a pileated woodpecker.

During the time I watched Priscilla yesterday, I never heard any answering calls. In the past I have often found Elvis and Priscilla working together in the same patch of woods. They are usually silent, except for the thump, thump, thump of their excavations. However they will occasionally stop and call to each other. I think of these as contact calls looking for reassurance. Similar to walking in the door at home and calling out, "Hello Honey, I'm home." In both cases the meaning seems to be, "I'm here. Are you there?"

The lack of a response has me wondering, where is Elvis? If you see him around, I would love to know when and where you spot him. (ldhubbell@comcast.net) 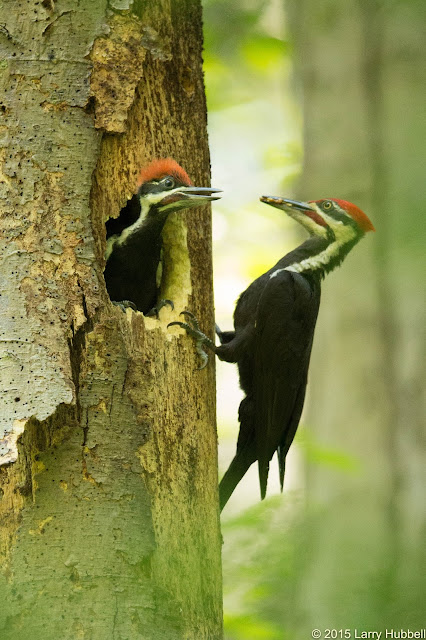 Here is a shot of Elvis at the nest back in June. Two obvious differences between him and Priscilla are his yellow irises and the the red malar stripes on his cheeks. I do think his cries are bit louder than Priscilla's, but that is a fairly subjective comparison.

Here are a couple of fun photos from the last week or two. 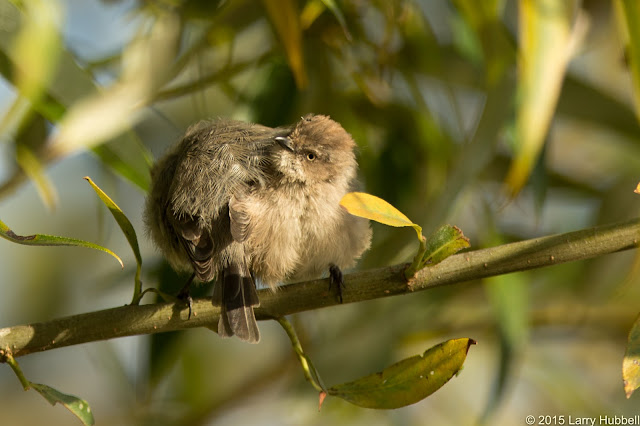 Can you make heads or tails of this bushtit photo? 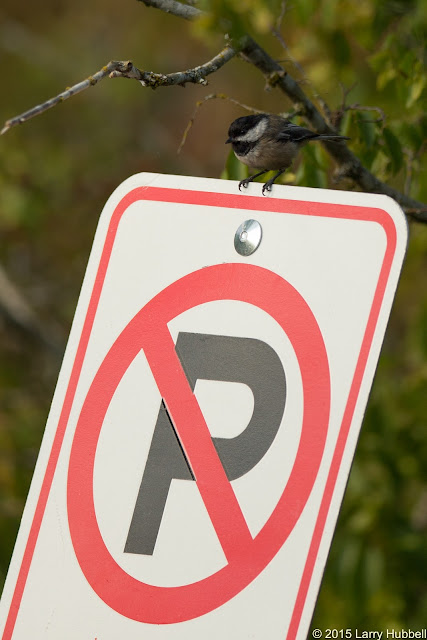 How about this rebellious chickadee, breaking all the rules. 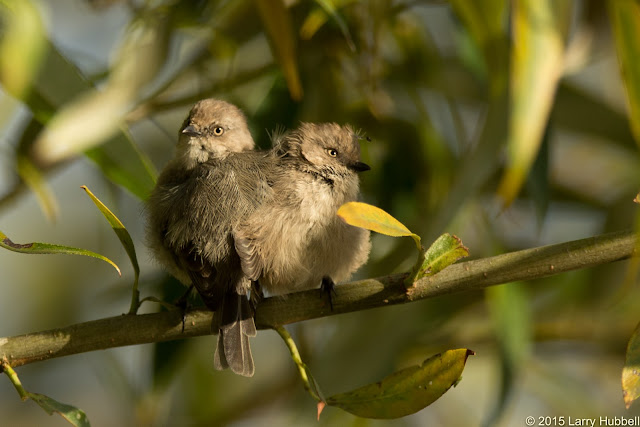 It turns out the bushtit in the photo was actually two female birds huddled close together fighting the early morning chill.


Bird Migration
Wednesday, September 23, 7 – 8:30pm
Center for Urban Horticulture, Douglas Classroom, 3501 NE 41st St, Seattle, WA 98105
Fall migration starts at Union Bay Natural Area in July, as the first wave of shorebirds from the tundra flows through our state, bringing up to 29 different species of sandpipers to stop with us a little while and fuel up before they continue, some flying as far as South America on their long journey to their wintering grounds. As July turns to August, the flow of birds increases, as the tropical flycatchers leave us and more birds begin to come down from Alaska. Billions of birds pass through North America before the migration ends. Find out from Constance Sidles all about how and why birds migrate, and get a peek at the species that we're most likely to see here.
Link: http://depts.washington.edu/uwbg/visit/calendar.shtml?trumbaEmbed=view%3Devent%26eventid%3D115097465