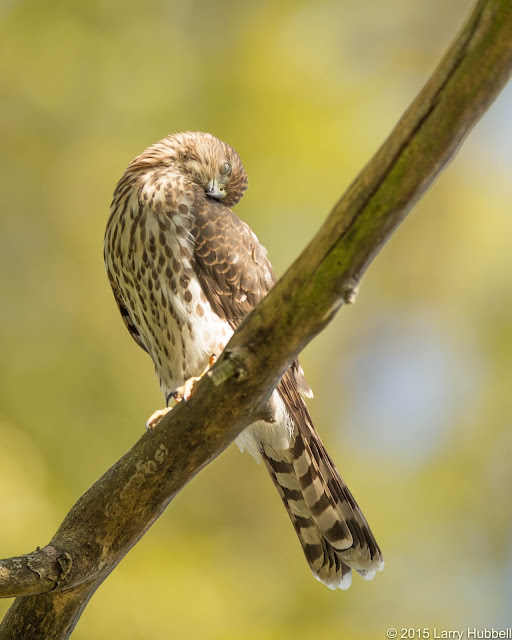 A young Cooper's hawk cleans itself in the afternoon light near Duck Bay. Most likely this is one of five or six young hawks that fledged in the Arboretum this year. Around six weeks after they fledge, the young hawks leave the nesting area. At this point they begin to hunt for themselves and they become much more quiet and stealthy. 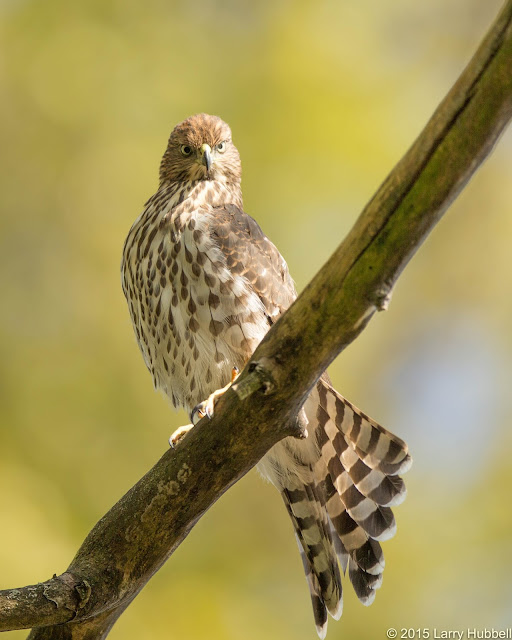 This bird never made a sound while I was around. If I hadn't looked up in the tree, I would have walked right under it, without even knowing it was there. After they eat, they often have a bulge in their crop, a temporary food storage located in the upper chest and neck area. 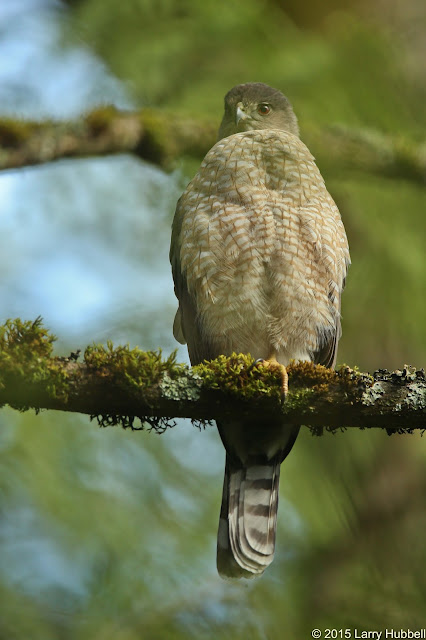 Here is an example of a full crop. This is a well-fed adult female from back in April. 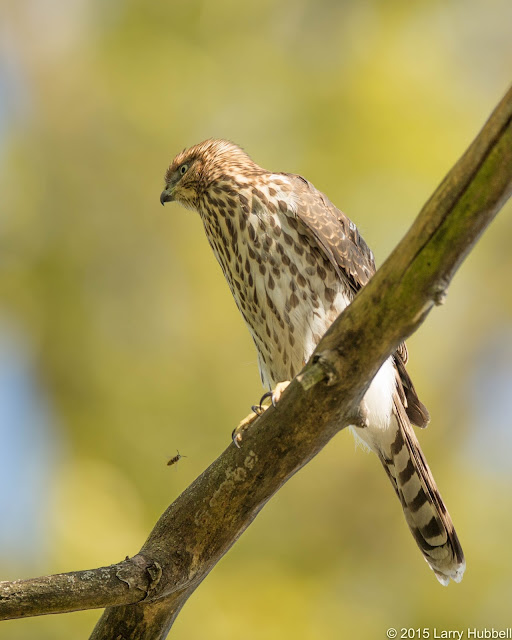 This bird's crop looks empty, still the bird may have eaten something small. Wasps, like the one in the this photo, are often attracted by the fresh meat which hawks consume, plus... 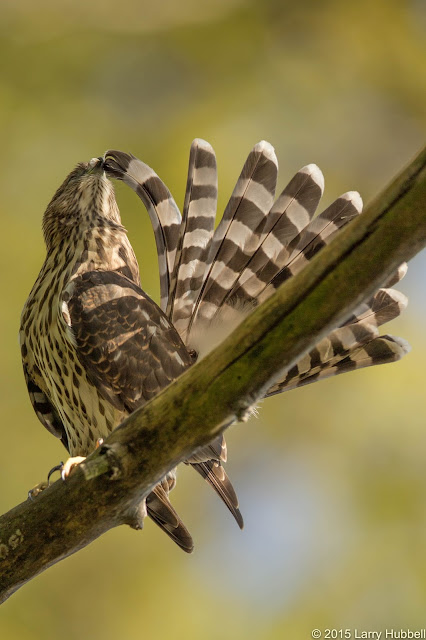 ...the young bird spent almost ten minutes carefully cleaning its feathers. The cleaning insures the feathers are in optimal condition. This is needed after hunting and eating, when feathers can be easily disturbed or matted with food. 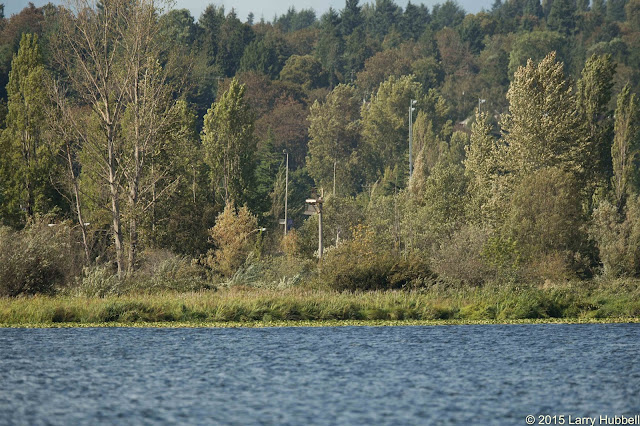 Dean Pearson, a groundskeeper for the UW Athletic Department, reports that the osprey are still hanging around the light poles at the UW baseball field. Sadly, the birds chose not use the new nesting platform, in the Union Bay Natural Area. The nesting platform is almost dead center in this photo, taken from Foster Island, while some of the light poles can be seen up and to the right.

Red-winged blackbirds chased the osprey away from the platform not long after it was installed. The osprey will be leaving for Central or South America very soon. Hopefully, next Spring when they return, they will take possession and utilize the new nest site. 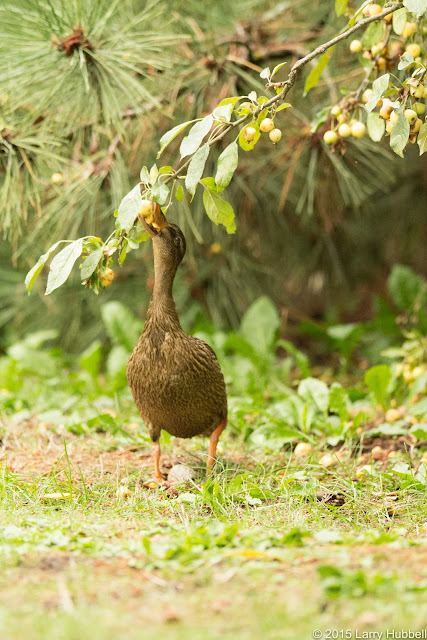 Speaking of Foster Island, I caught this mallard trying to steal a crabapple on the south end of the island. No doubt their flexible feeding habits contribute to their success as a species. 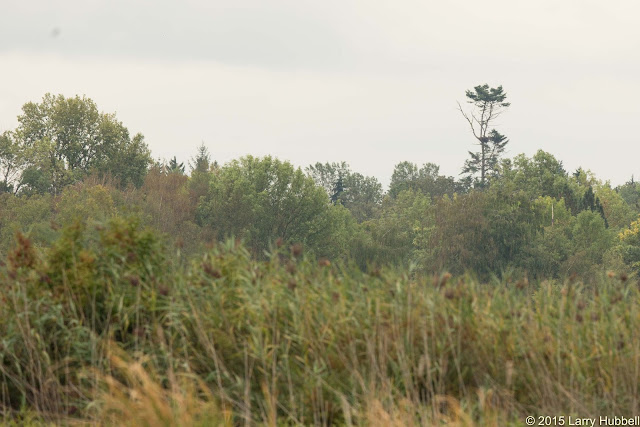 The 520 bald eagles, Eva, Albert and their young, have been gone for a month or so. In the past, the parents usually returned by the end of September. The nesting tree, the tall tree on the far right, looks a bit lonely and empty without eagles among the branches. Hopefully, they will return soon. 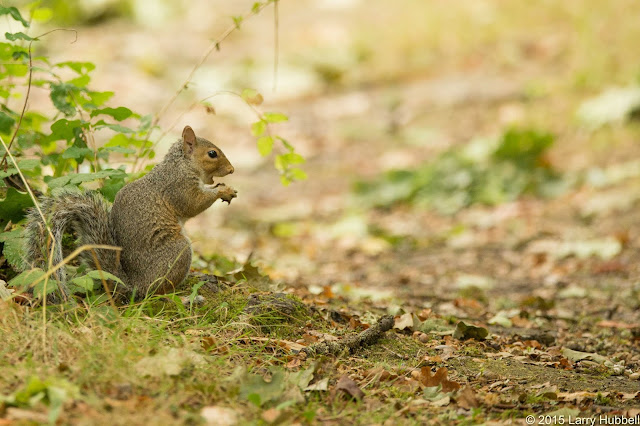 About two weeks ago after the windstorm, it was interesting to see all the eastern gray squirrels feeding on the ground. The previous day's wind littered the ground with acorns. The squirrels decided that under the circumstances, there was no reason to be climbing up the oak trees. 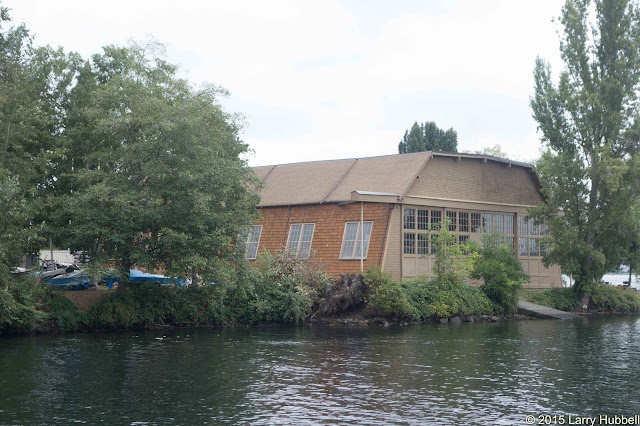 The cottonwood tree next to the old boathouse, noticeable here by its absence, must have also blown down in the windstorm. The tree was twice as tall as the building and usually full of cormorants. Prior to taking this photo, a single cormorant flew through The Cut and landed in the water. It paddled back past the boathouse and repeatedly looked up into the air, as if searching for the old familiar tree. 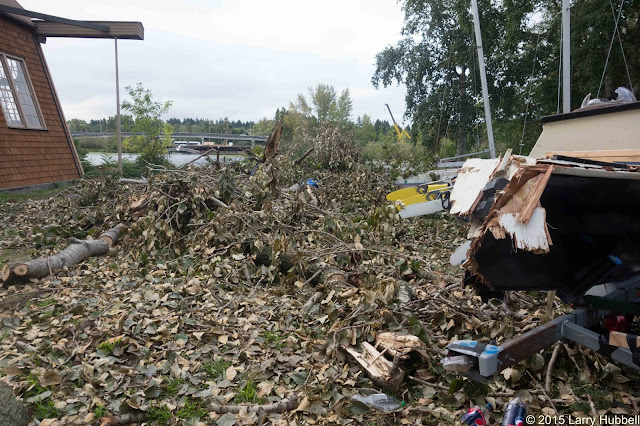 The tree fell into a boat storage area. The smashed pontoon on the right is easily visible. However the boat and trailer under the tree are less obvious. I believe the little hint of blue in the center of the photo is part of the boat trailer. No doubt the boat and trailer are a total loss. 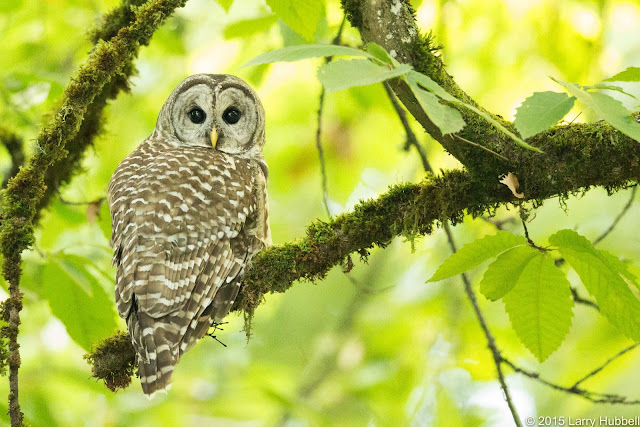 Twice in the last week I have photographed one of the barred owls near Duck Bay. I suspect it is one of the three young seen earlier in the year. 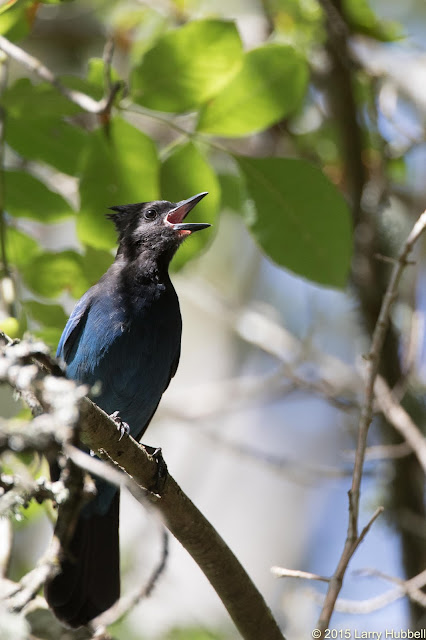 In both cases, Stellar's jays and other smaller birds were making a racket and harassing the young predator. The smaller birds included chickadees, juncos, wrens and towhees. They were loudly letting the world know where this dangerous predator was residing. Finding the owl was child's play given the noise level. 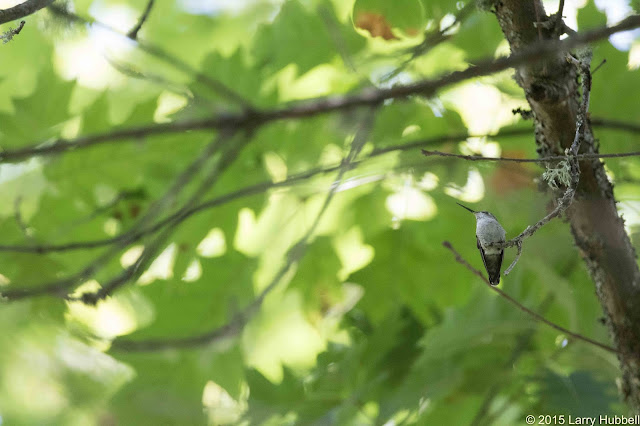 At one point, three or four hummingbirds were in constant motion around the owl. 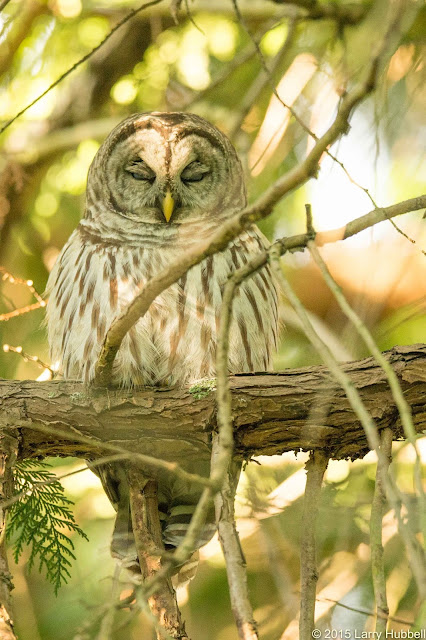 For the most part, the owl ignored all their antics. 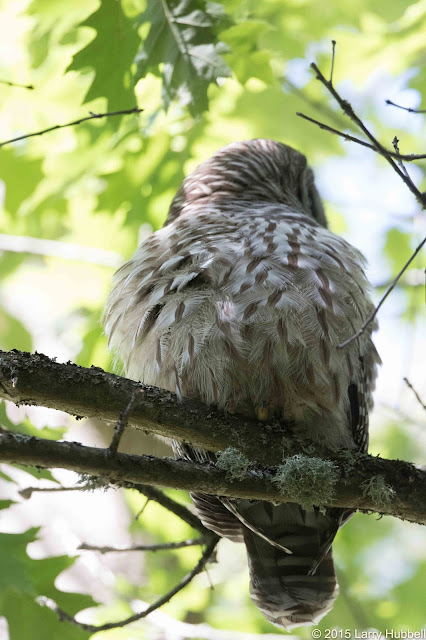 Once, when the jays became particularly loud and noisy, the owl fluffed up its feathers. Apparently it felt the need to look larger and more intimidating. The tactic worked as none of the jays came too close to the owl. Of course, it might have been the talons that discouraged them, rather than the feathers. 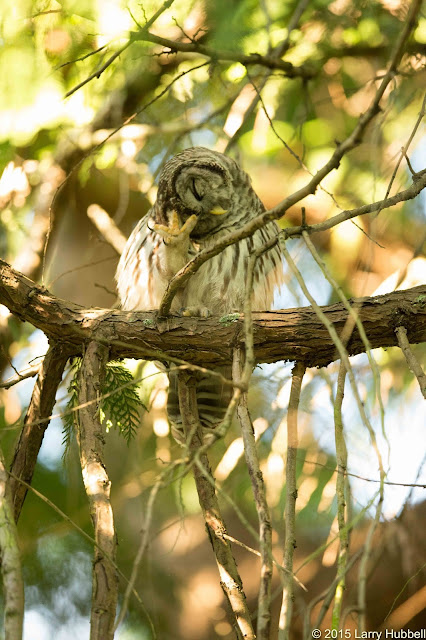 It is interesting to compare the owl's foot to the hawk's. 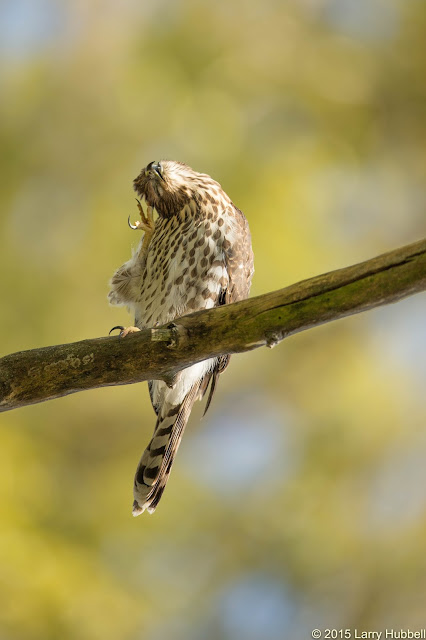 The owl's foot looks wide, stubby and strong, while the hawk's claw is more slender and elegant. Regardless of their appearance, the hawk's talons can be very effective. I understand that the long slender talons are used in a pulsating fashion to create multiple holes in the heart or other internal organs.

A few years ago, a large, most likely female, Cooper's hawk took down a wigeon. The largest Cooper's hawks weigh less than a pound, according to All About Birds. Wigeons can weigh from one to four pounds. I guess to some extent, "size matters not".

That is the wildlife news from Union Bay.

Thanks for following along!

PS: Just in from Dan Pedersen on Whidbey Island a link to an interesting story regarding falconry and bunny rabbits. It is from the: South Whidbey Record.

Dan also does a wonderful blog called, Off The Rails. If you are in need of a smile you might want to take in this week's post. Where Country Songs are Born