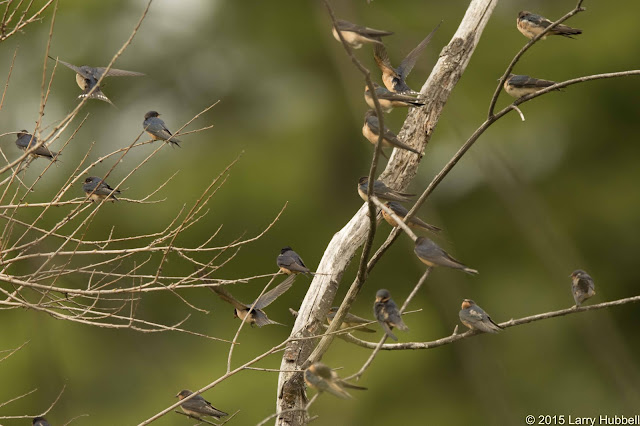 Swallows are a photographer's nemesis. Their sharp, swift turns as they feed in mid-air, seem like the perfect photo opportunity. However, neither I nor my camera are fast enough to record them swallowing an insect in flight. 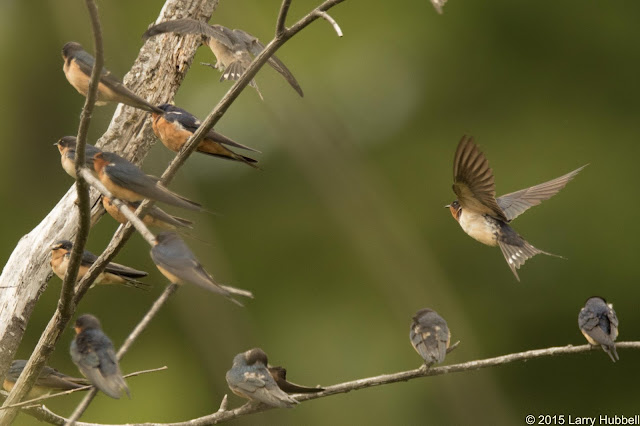 Even swallows need to rest, which allows me to catch an occasional photographic consolation prize. It is almost surprising when swallows stop flying, since they eat and drink while in the air. Skimming the surface of Union Bay, they slow for just a moment, to secure a sip of water. 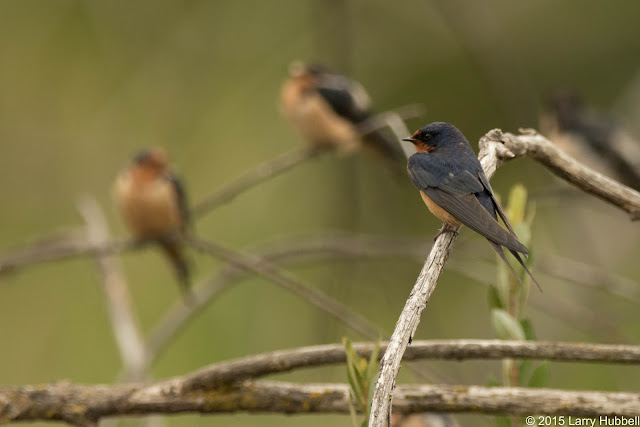 Though different species of swallows sometimes hunt together, I believe today's post contains only barn swallows. 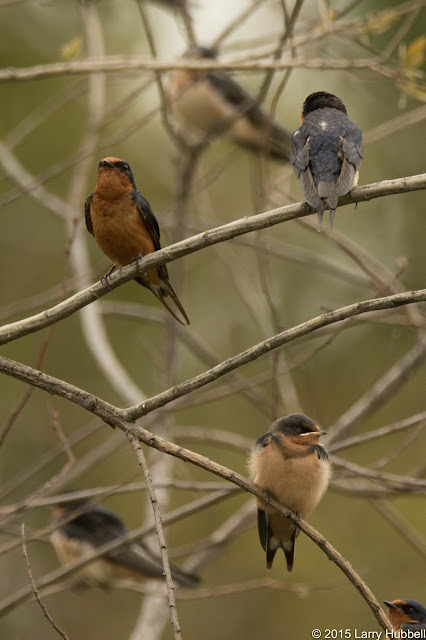 Of all the swallows that visit Union Bay, only the barn swallow has a forked tail. The males have the longest tail and the darkest colors, like the bird in the upper left. The bird in the lower right is a juvenile. The yellow gape, which outlines the mouth, is a clue to its youth. Not only does the color attract our attention, but it helps the parents find the proper place to deliver food. 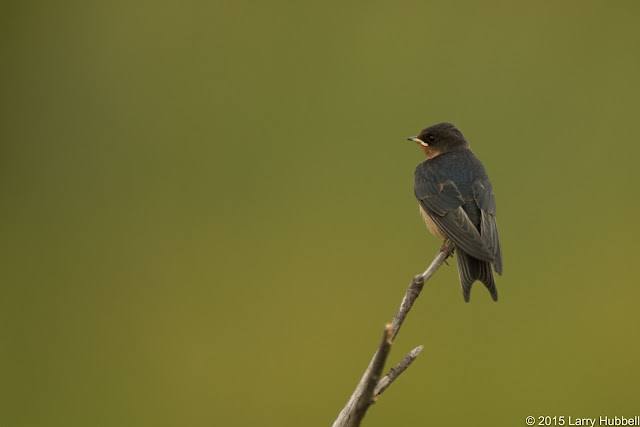 You can also tell this is a young bird because its tail has yet to reach full length. 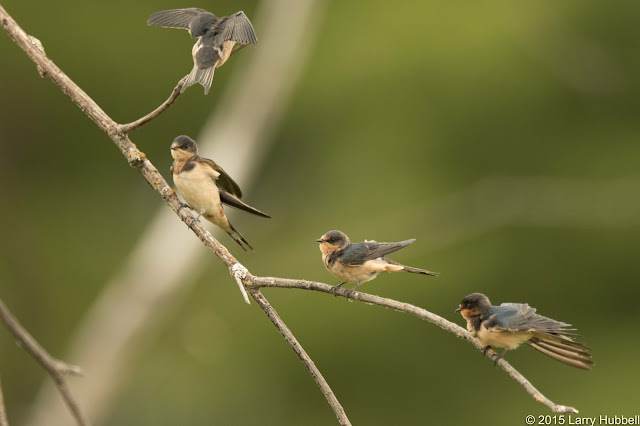 These swallows lack the dark coloring of the male and the yellow gape of the young bird. Still, I suspect they are juveniles; perhaps, just a bit older. They have learned to feed themselves and no longer have any need for a yellow gape. 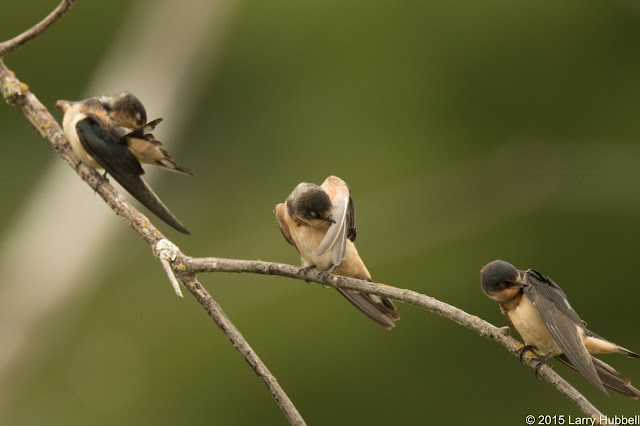 In addition to resting, swallows also land to groom their feathers. 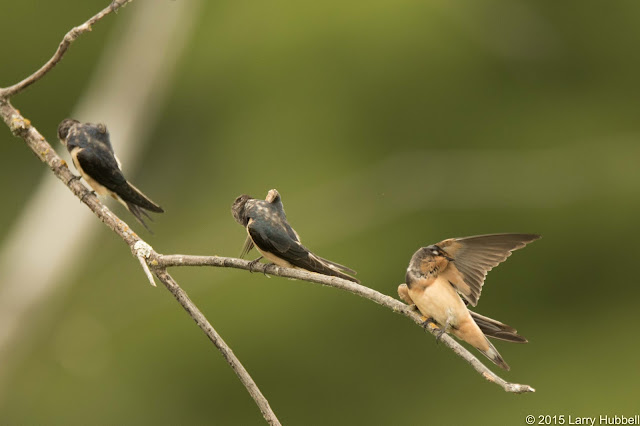 To keep their eyes safe, they often close them while grooming. 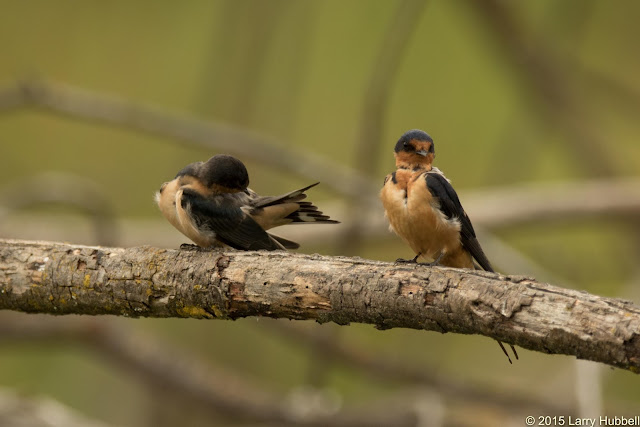 On the right, is another example of a male's long tail. You can see the tips extending below the branch. 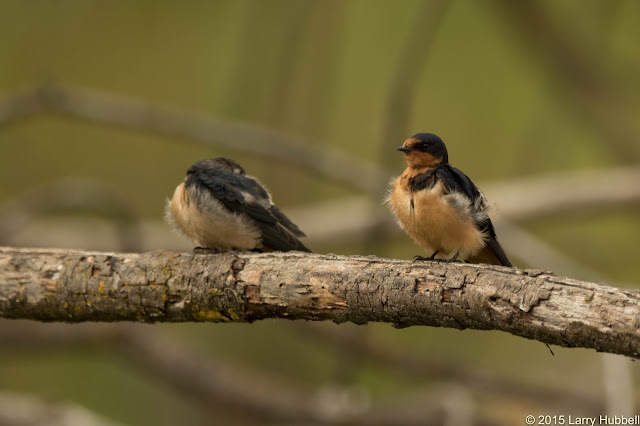 In this photo their tummy feathers are fluffed up. It might be from the wind; however, I wonder if they can make their feathers more erect to aid the grooming process. 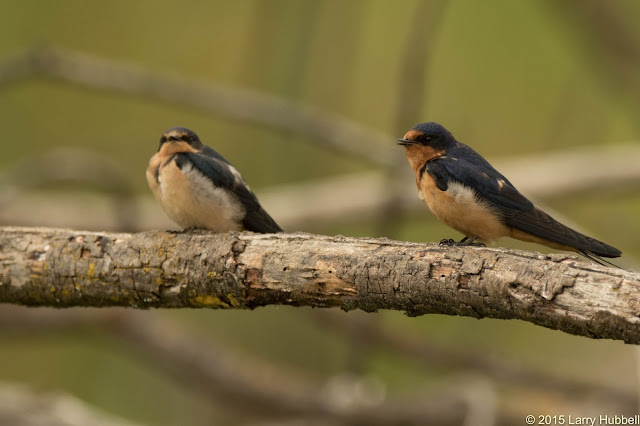 Listening to their continuous calls, tells us they are a community in constant contact. You can hear the sound of their songs by clicking here. When a warning is sounded they all take to the air at once, and yet, they never collide. 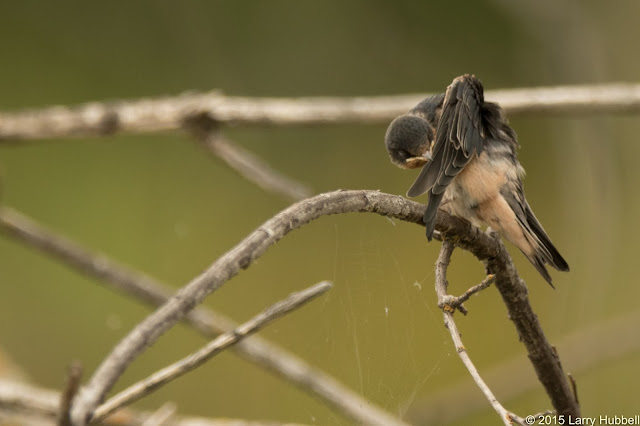 The following photos show a single young bird as it cleans its feathers. 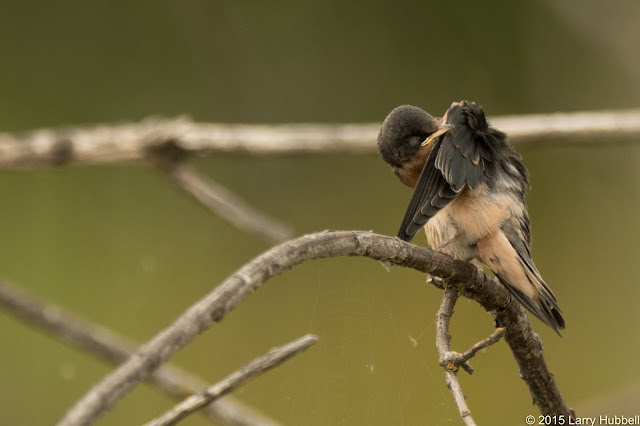 This obsessive cleaning must be instinctual for a young bird to be so devoted. 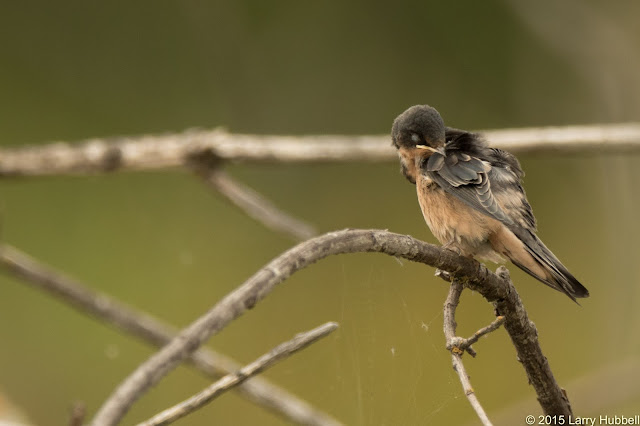 It makes sense that a bird who eats and drinks while flying... 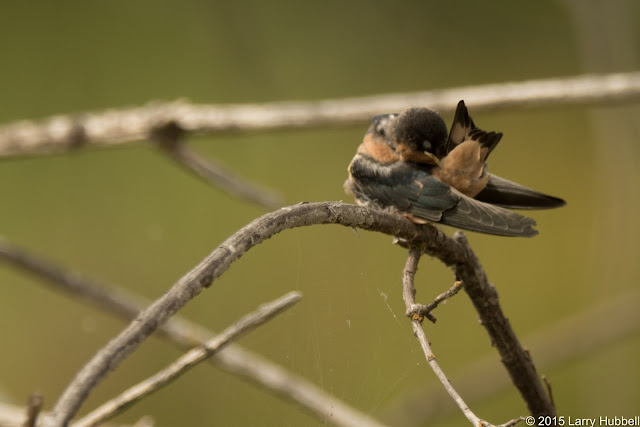 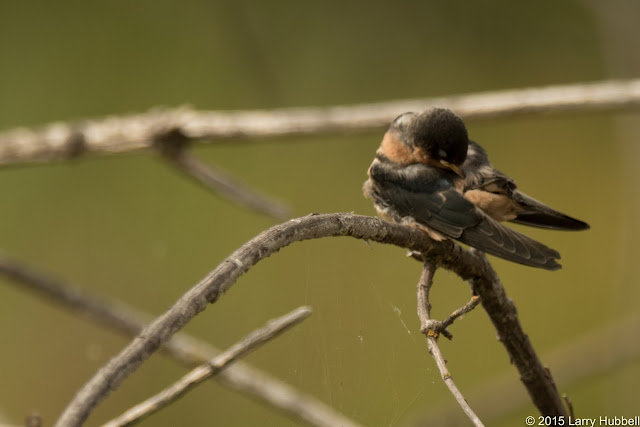 No details are overlooked. 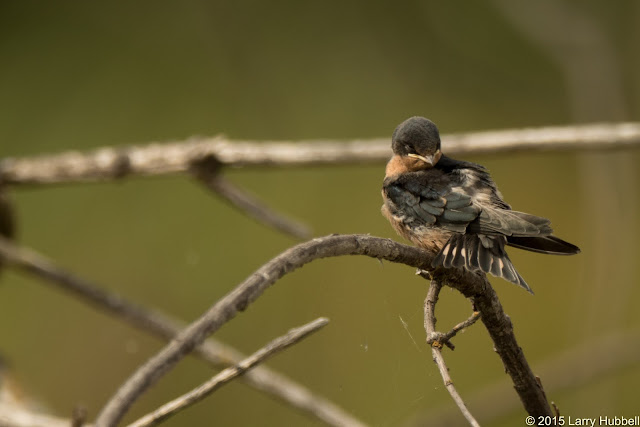 The tail is tested and... 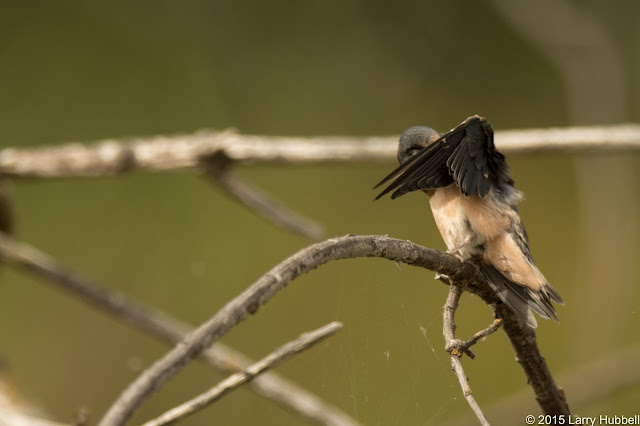 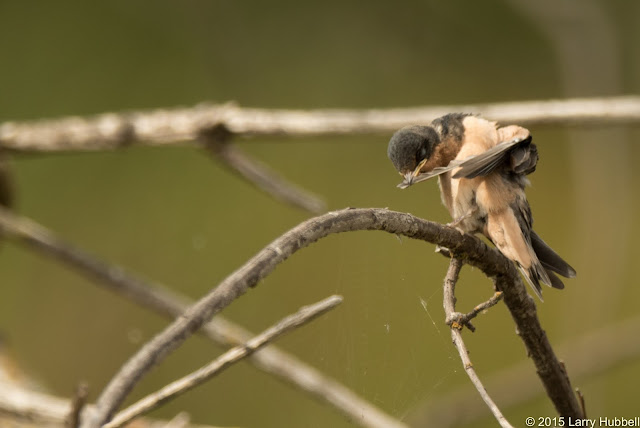 ...to the very tip of the primary feathers. 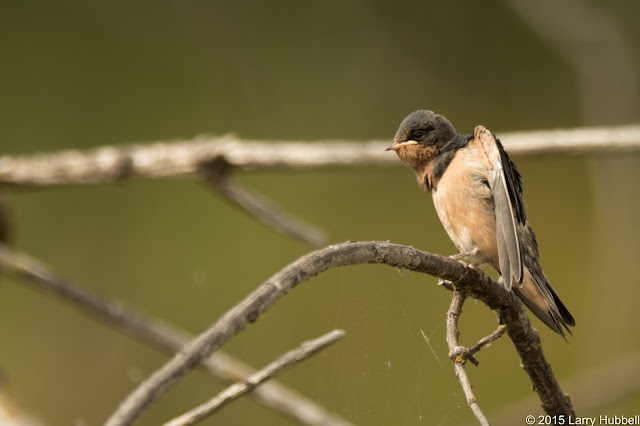 By the way, some of the swallows may have already left for South America. Most of the rest will be leaving in the next month or two. If you would like to enjoy their songs and aerial displays, I would suggest a walk out to Foster Island. Yesterday, they were circling above the cottonwood on the north side of the island and landing near the water to the east. 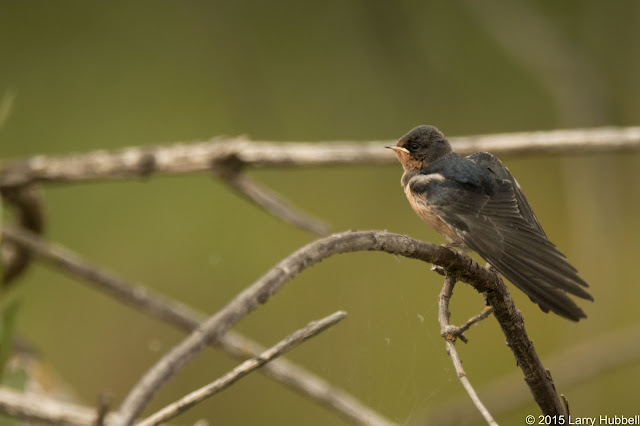 Of course, the optimal experience is to take a kayak or canoe and drift quietly into the lily pads as they surround you with music, while they feed and drink in mid-air.