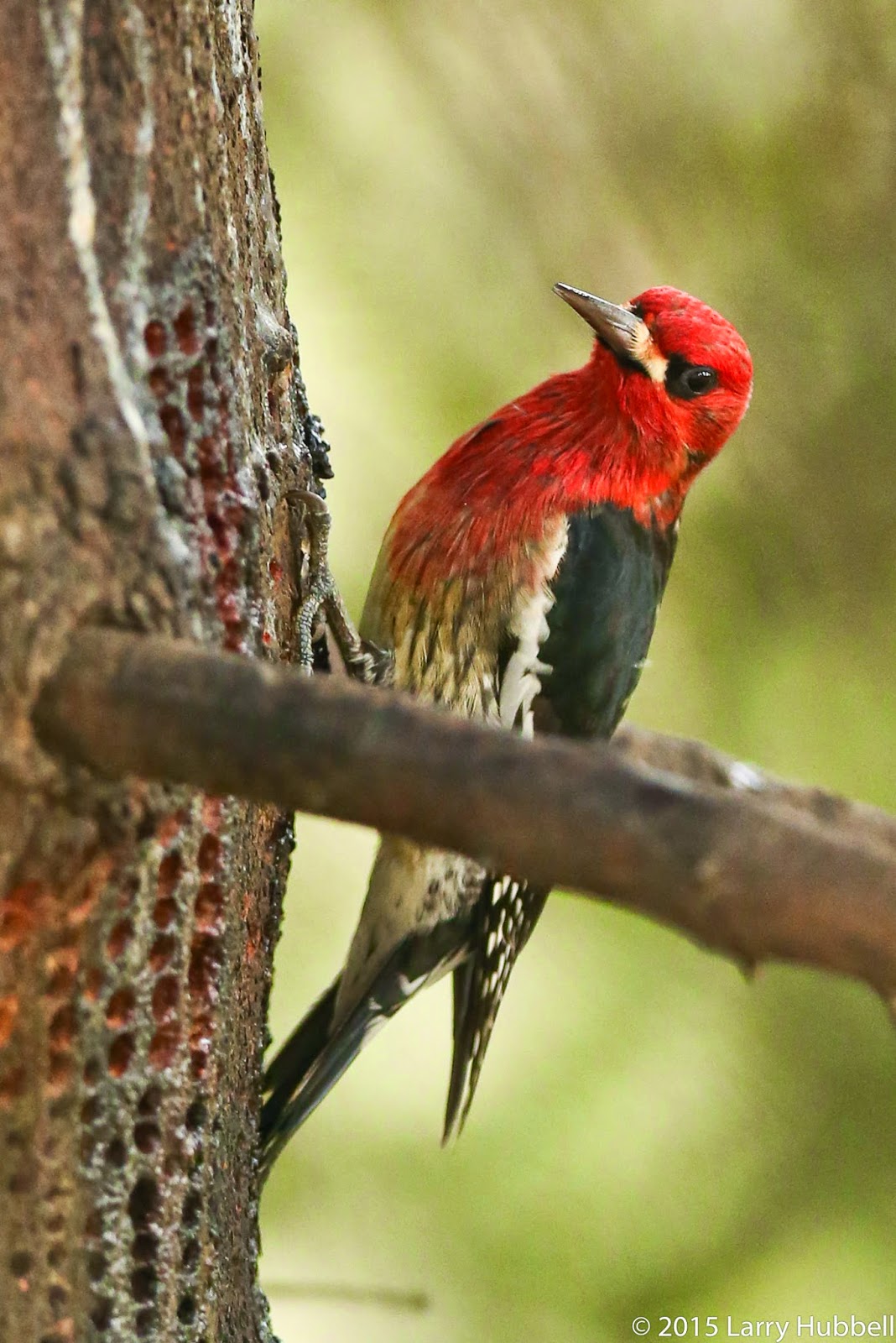 This week a kind birder pointed out a second red-breasted sapsucker near the one I wrote about two weeks ago. (Thank you, Anne!) It is interesting to note that this bird has considerably more red on its head and chest. 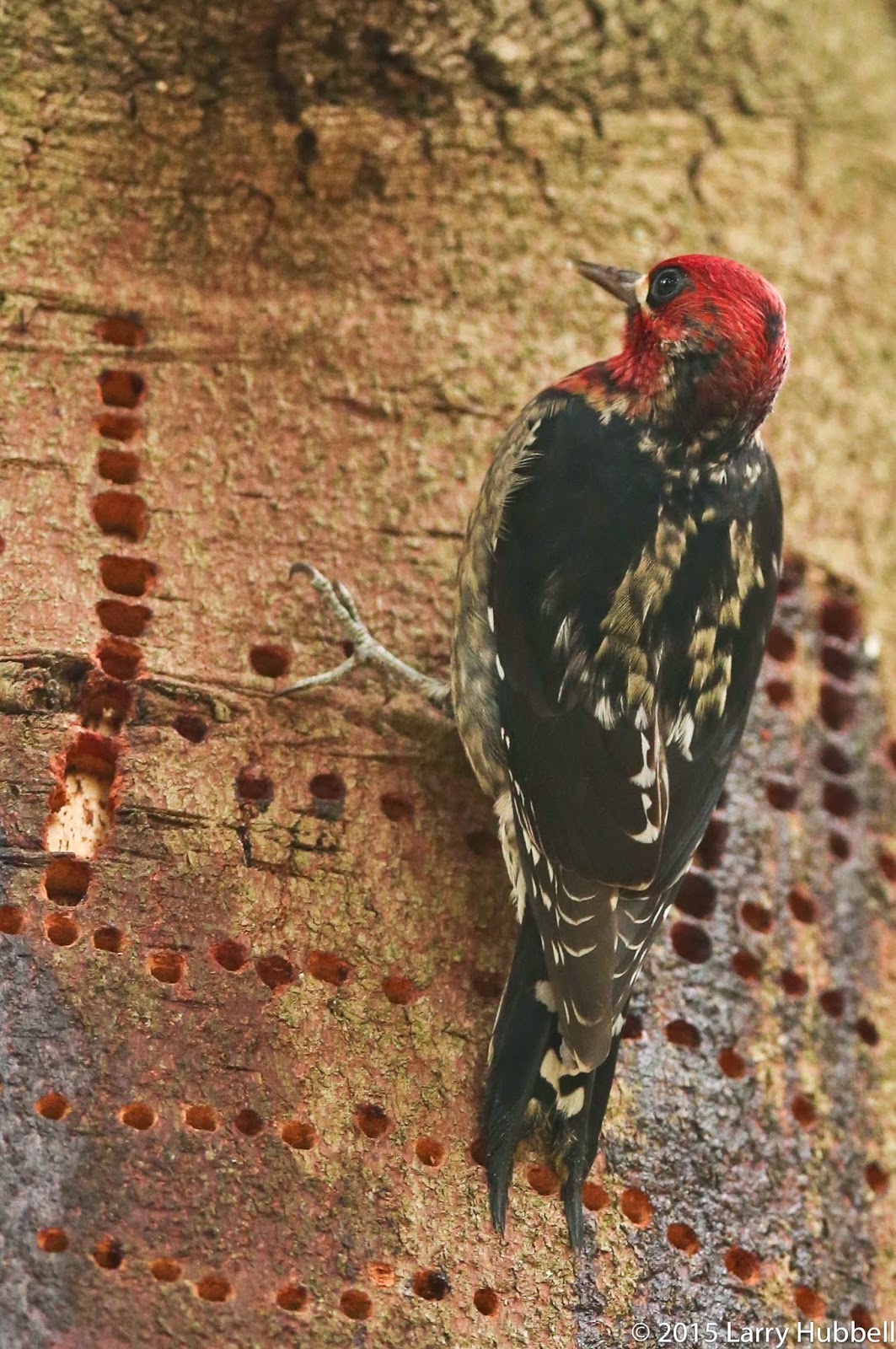 The difference is obvious in this current photo of last week's bird. 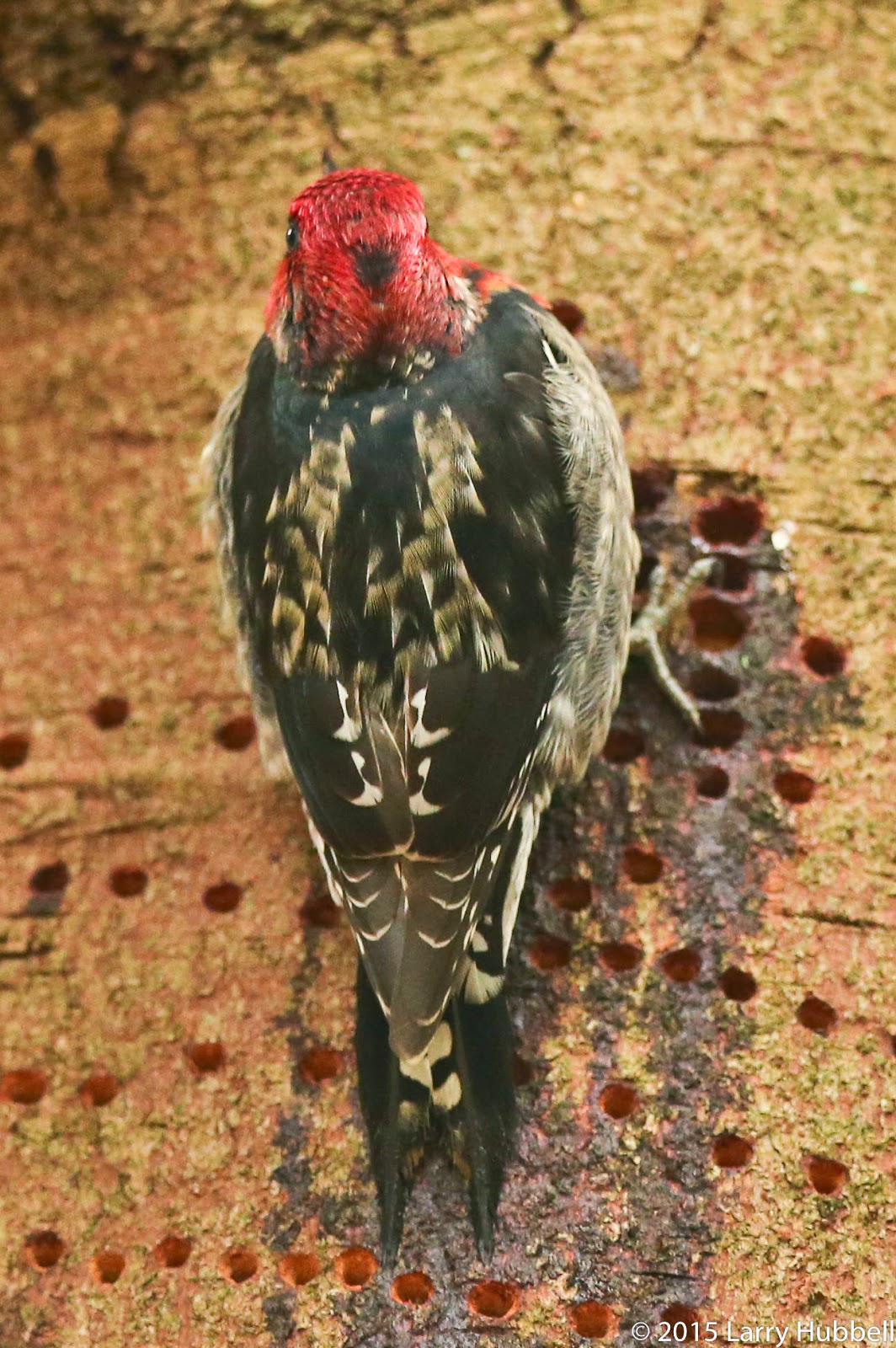 I have started thinking of last week's bird as "Spot", due to the black mark on the back of its head. 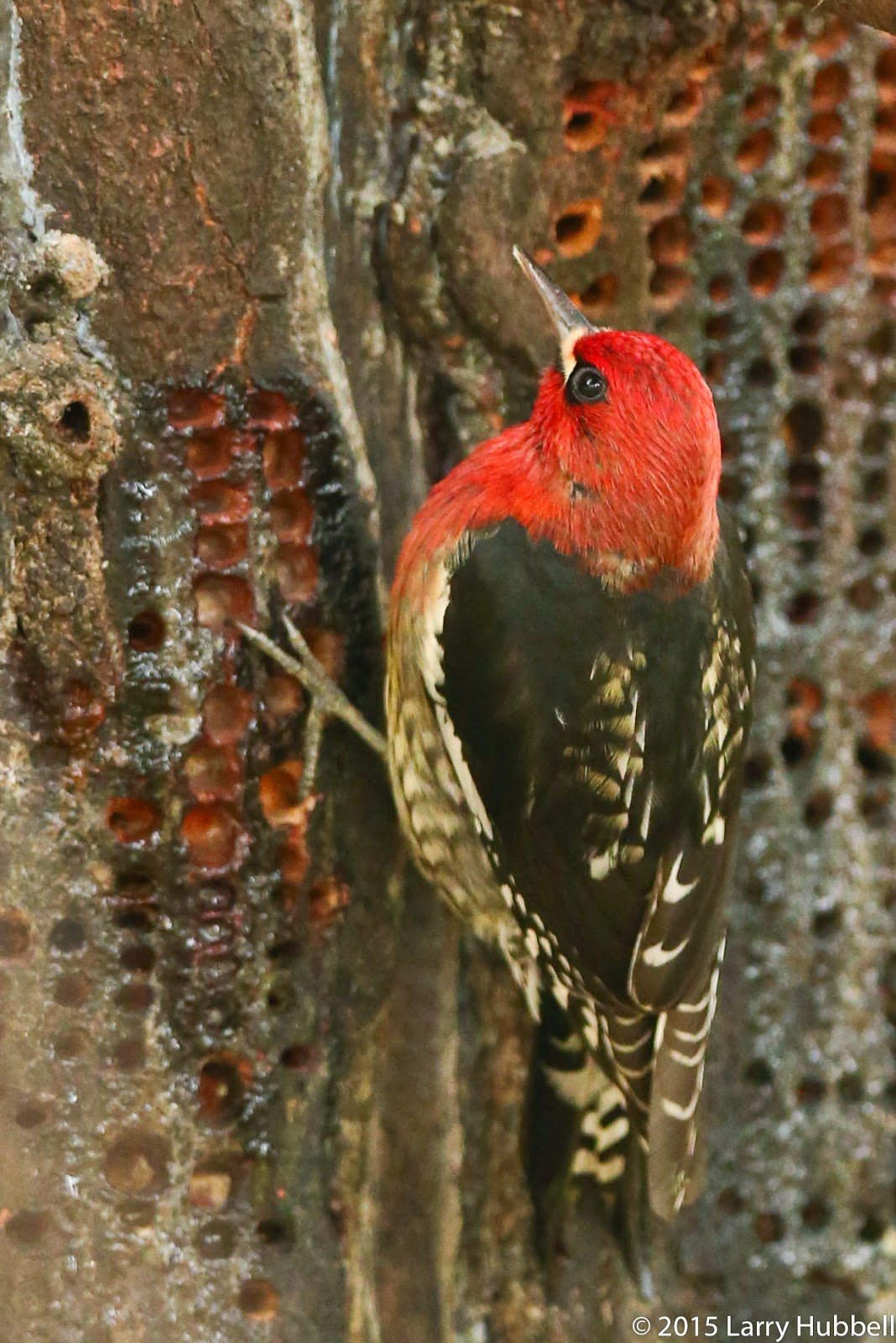 The new bird, at least new to me, I have been calling "Eric the Red", due to all the additional color. In particular, the back of Eric's head is just about pure red. Another obvious difference in the birds is their behavior. Look at the density of Eric's sap wells. They are extremely tightly placed. 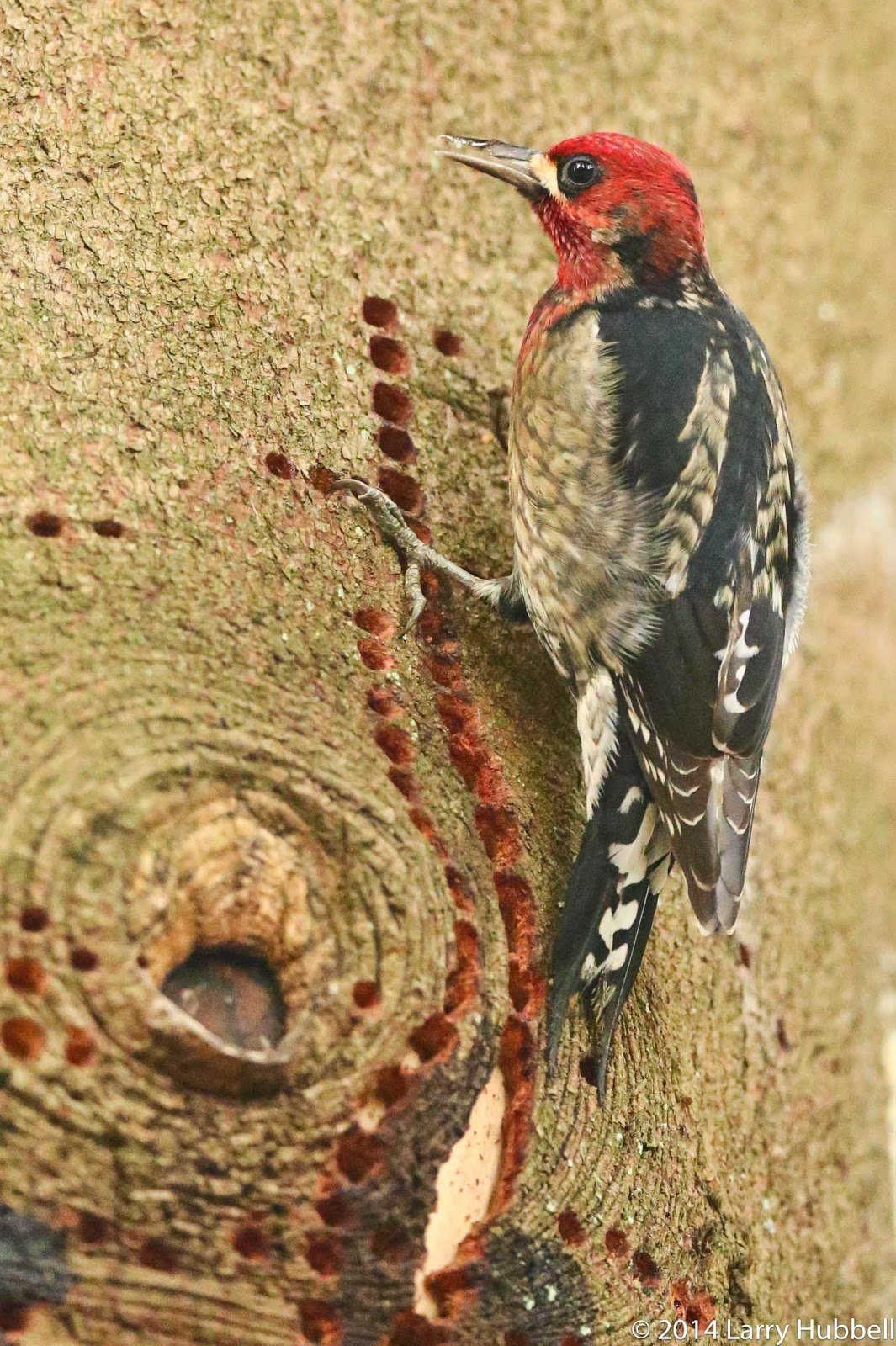 On the other hand, Spot has been creating lots of vertical rows. Some of these have even connected into white stripes of freshly exposed heartwood. I have heard about Spot visiting Eric's tree, but I have only seen them at their own trees, about 150 feet apart. 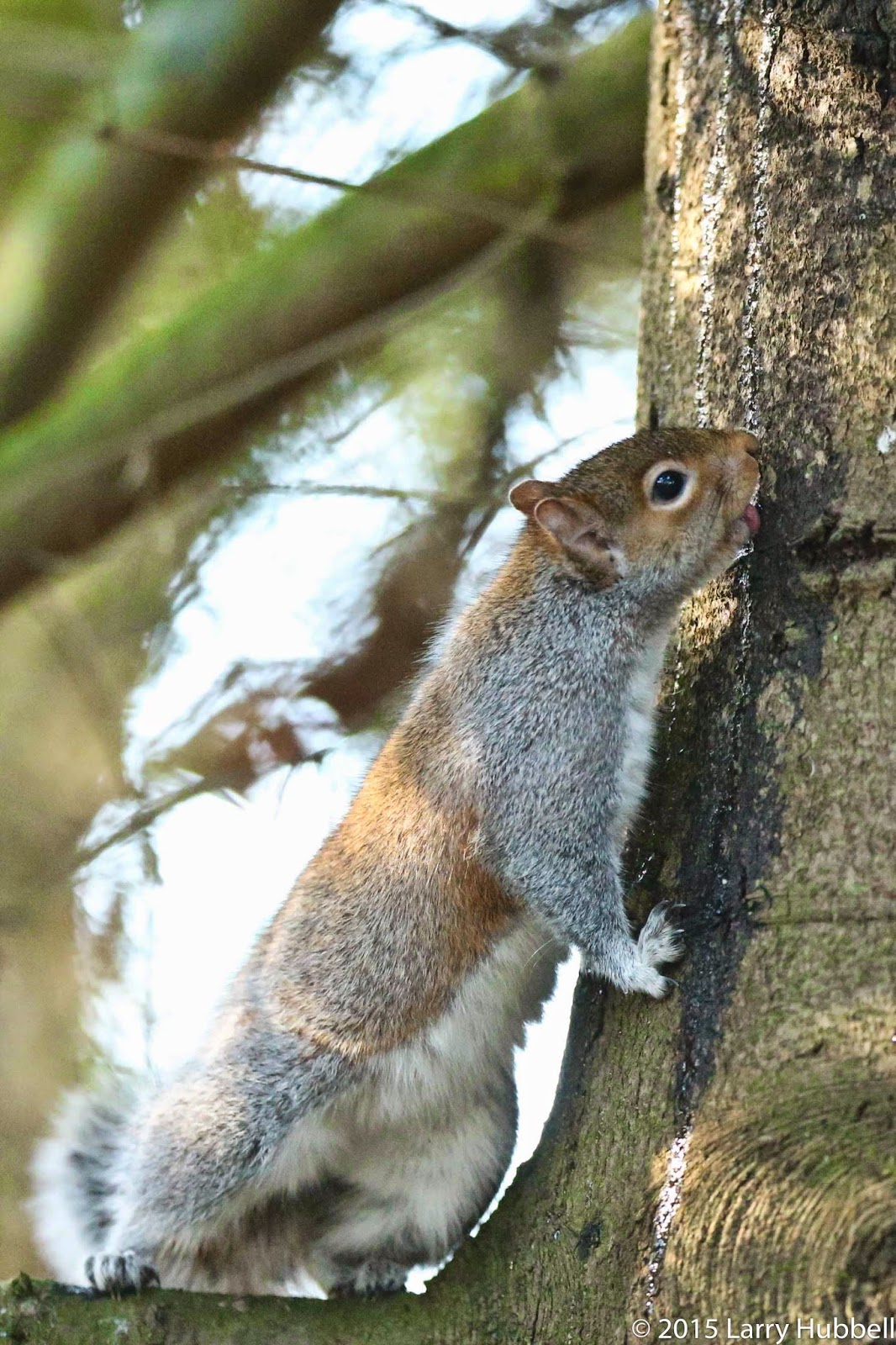 One of the things they share are squirrels. Both birds will leave their primary locations when a squirrel arrives to share in the bounty. This squirrel is taking advantage of Spot's work. 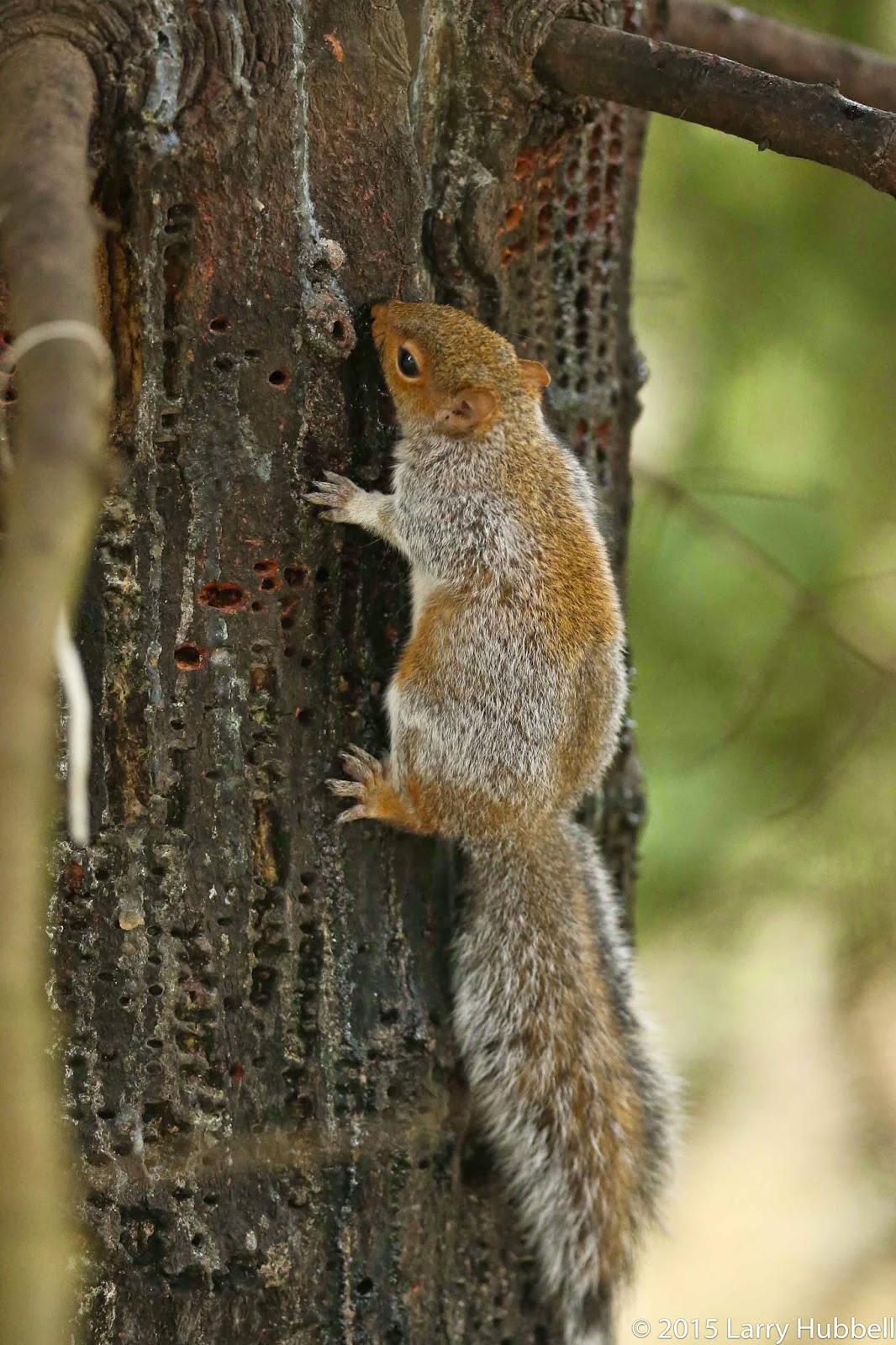 A bit further north, this squirrel is taking over Eric's site. When the squirrel approaches, Spot tends to leave the area. I have seen Eric simply hop around to the opposite side of the tree. 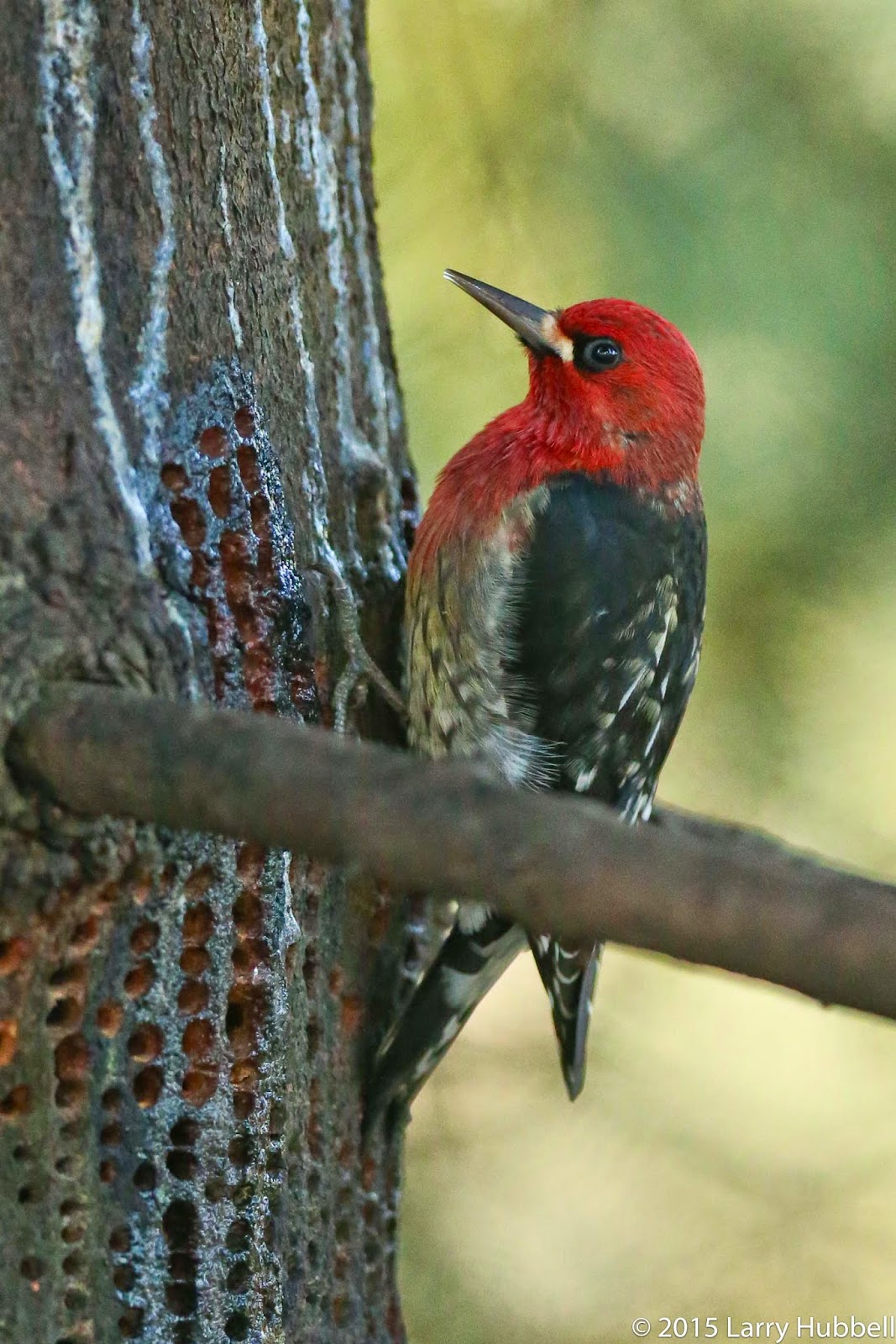 Given the way Eric tends to conserve energy, e.g. staying close to the tree and tightly packed sap wells, plus... 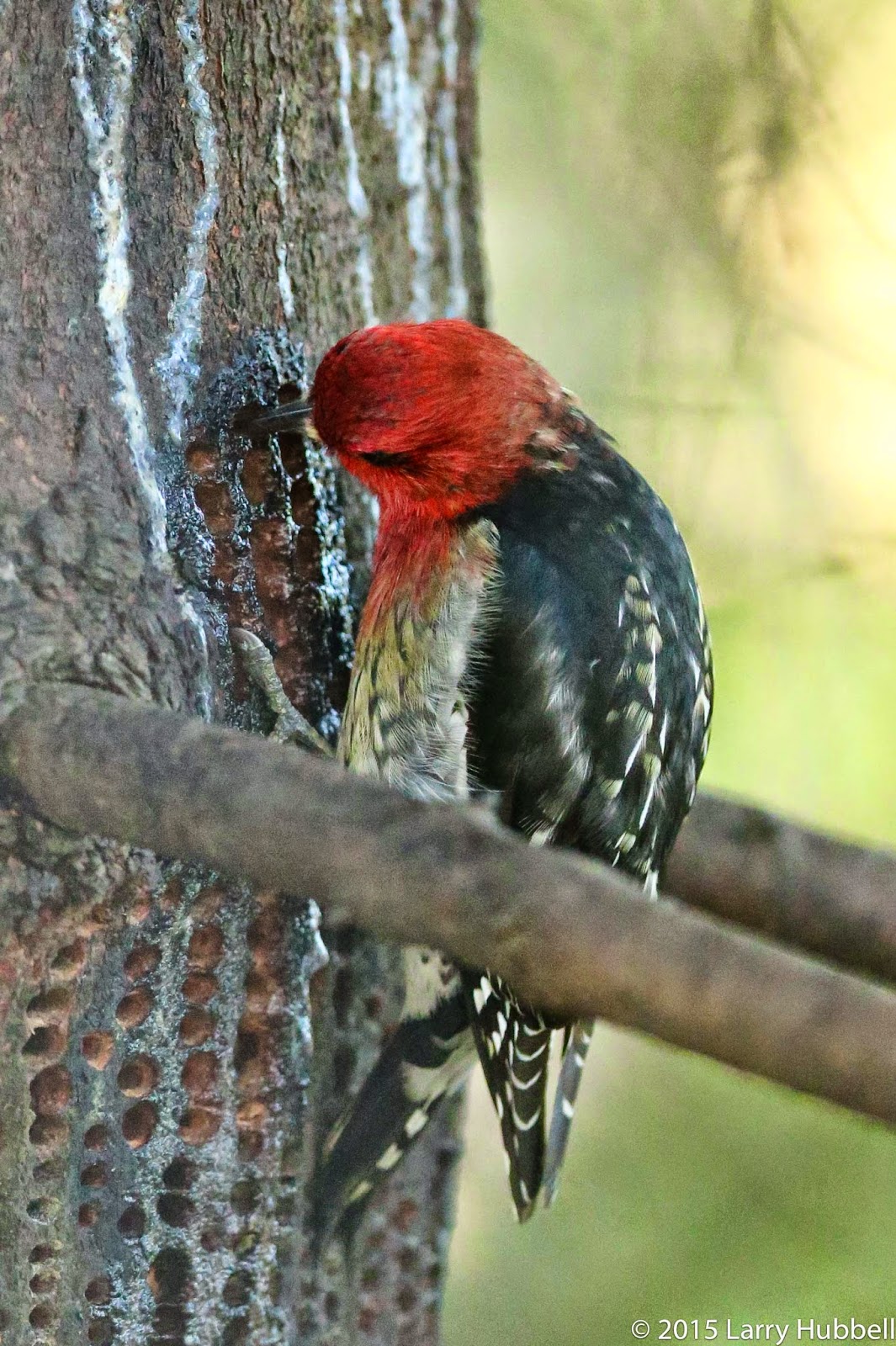 …the additional color, it all makes me think Eric might be a bit more mature. 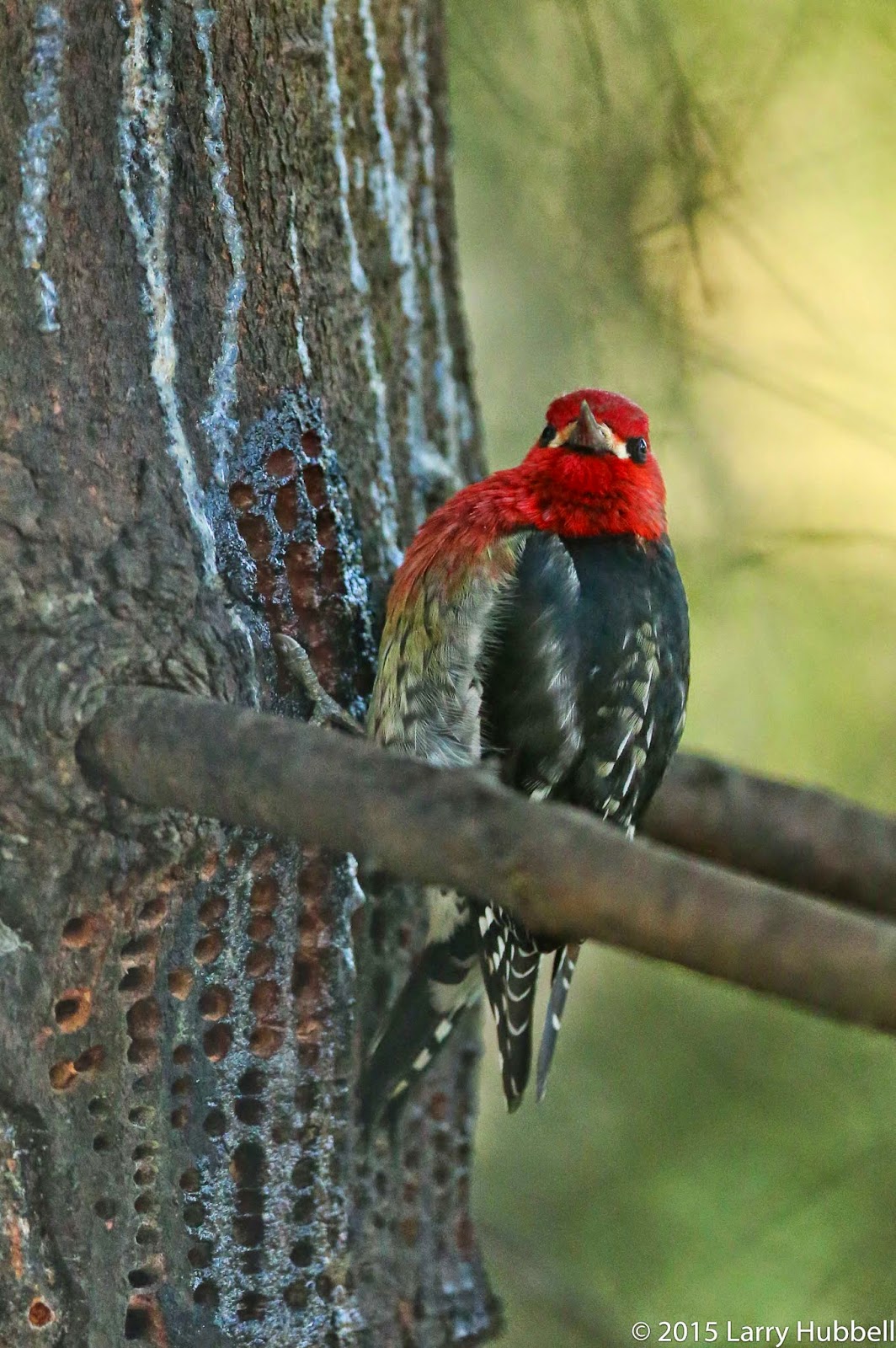 It almost looks like someone poured red paint over Eric's head and it dripped down over the chest. 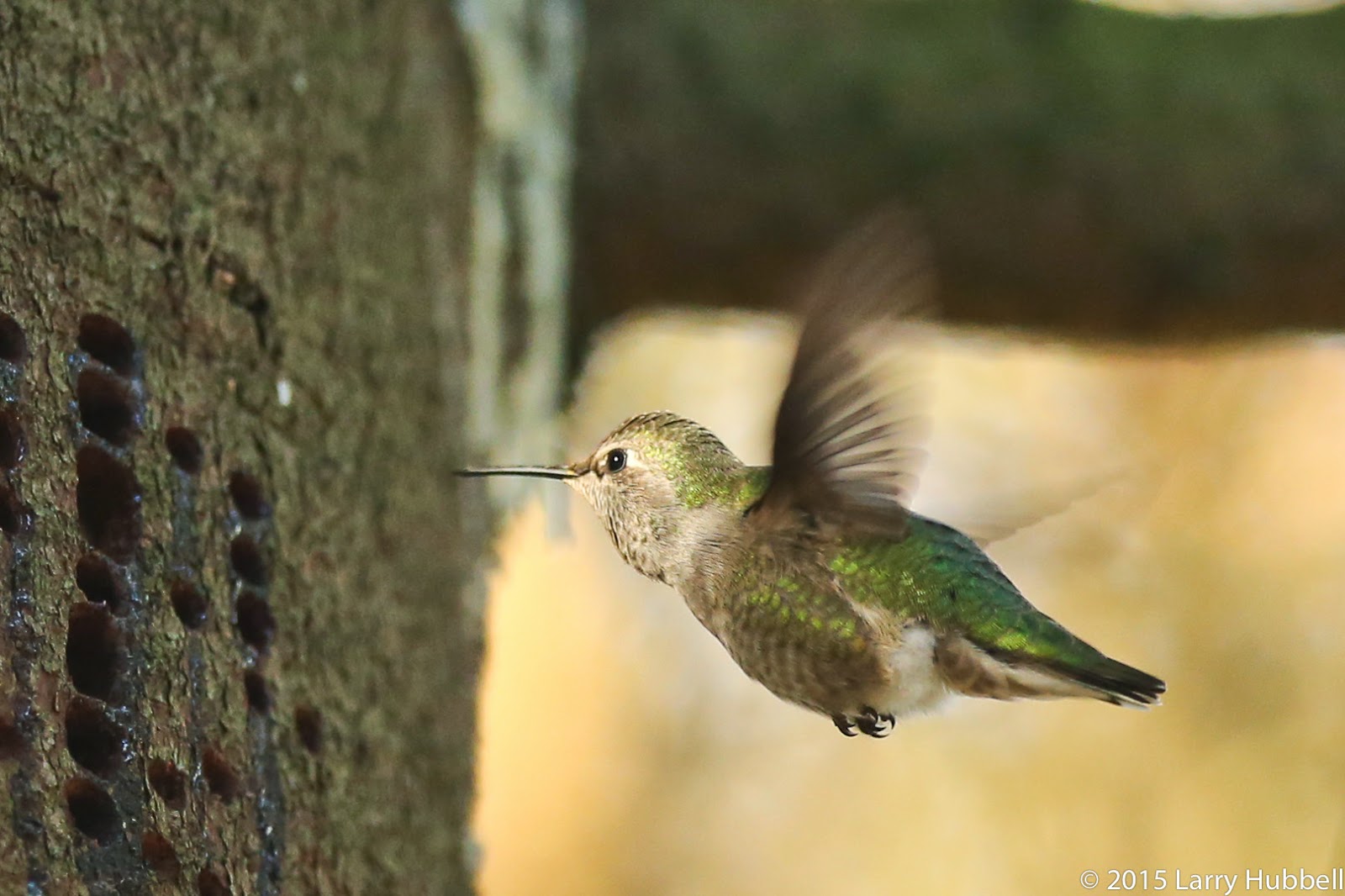 In addition to the squirrels, the Anna's hummingbirds also share in the sap. 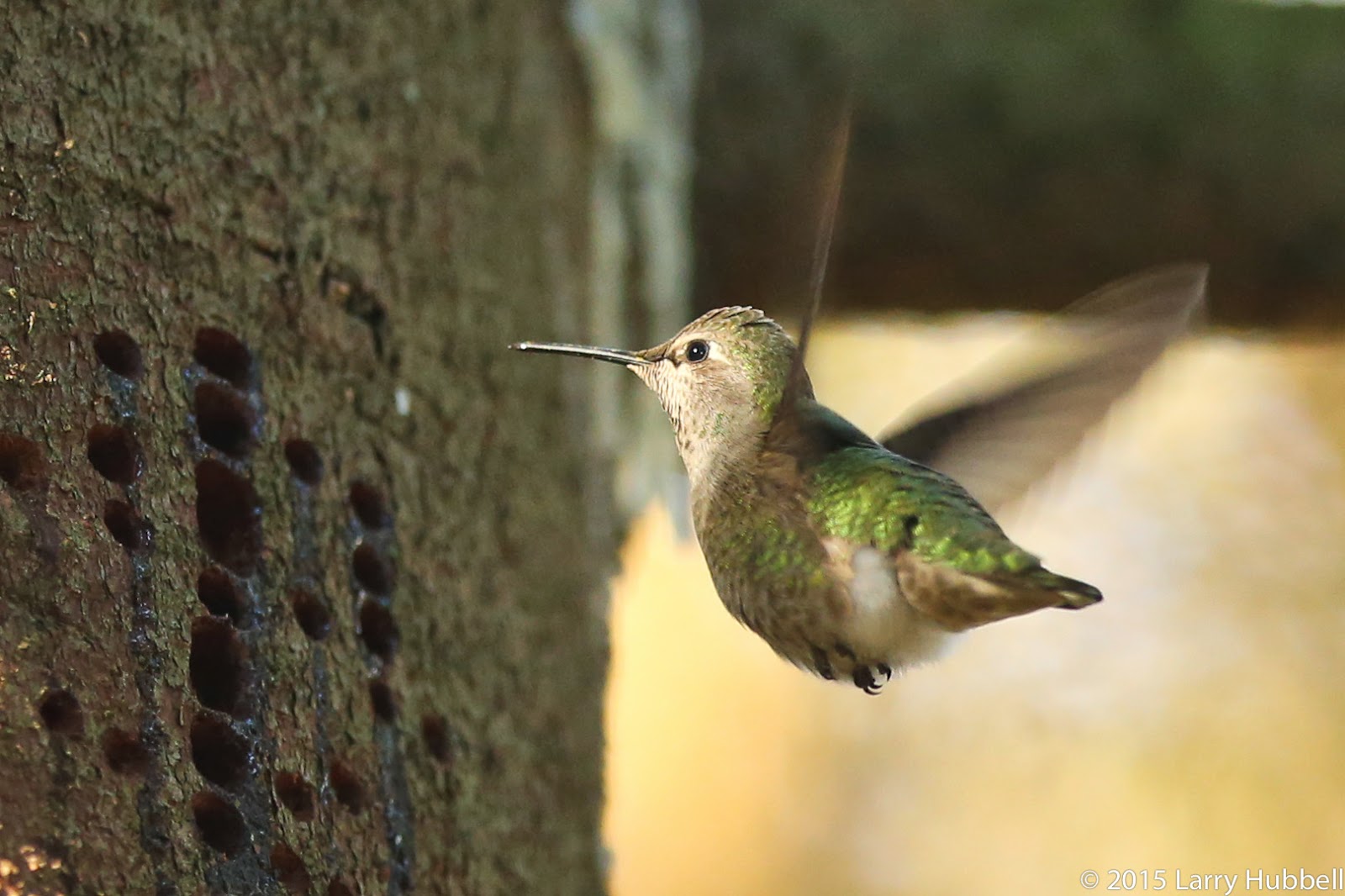 Hummingbirds are extremely fierce, but I actually saw Spot spend the energy to chase one away. 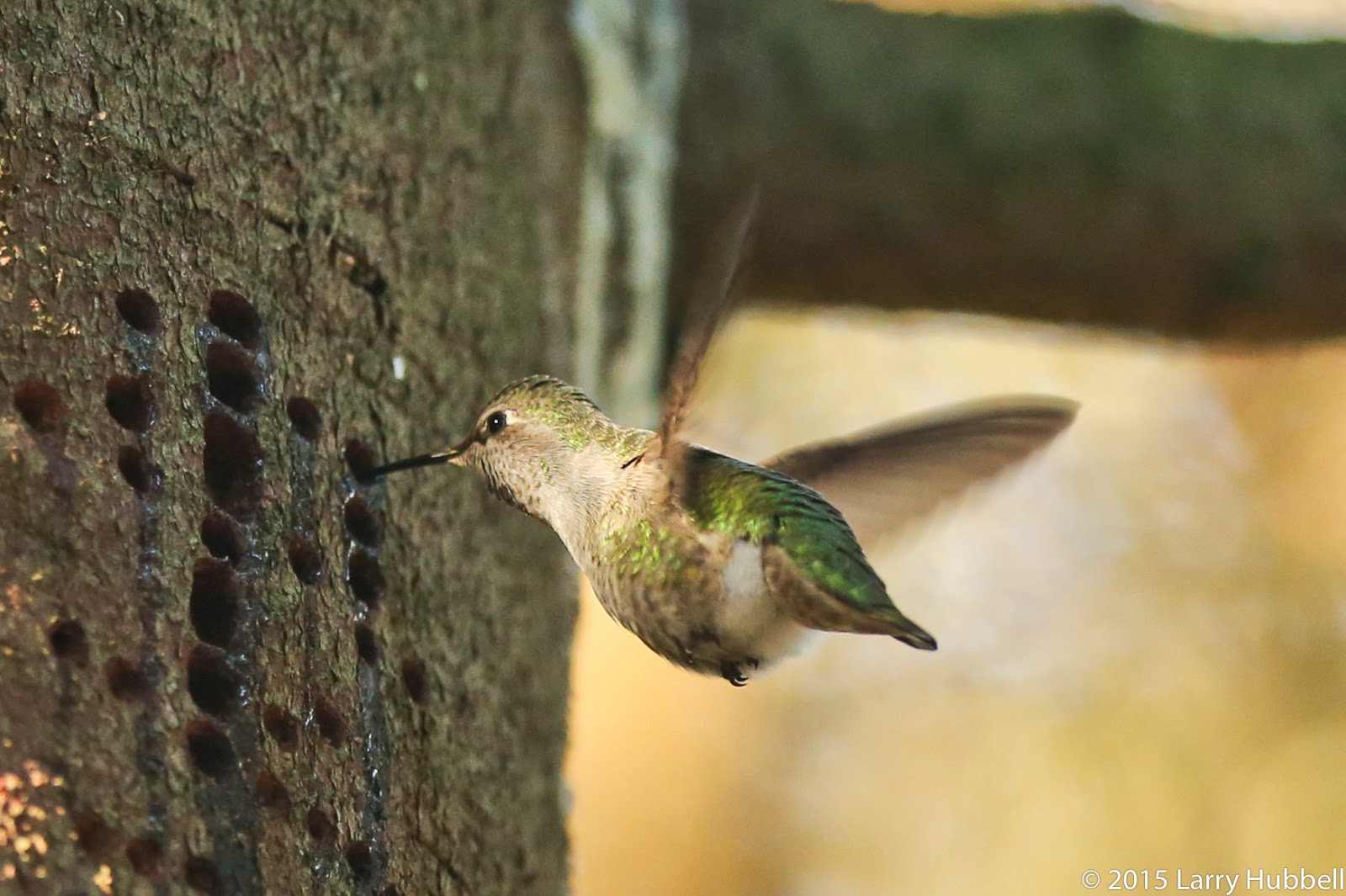 Sometimes the hummingbirds can be seen waiting on nearby branches, but most often they just work wells that are a few feet above or below the sapsuckers. 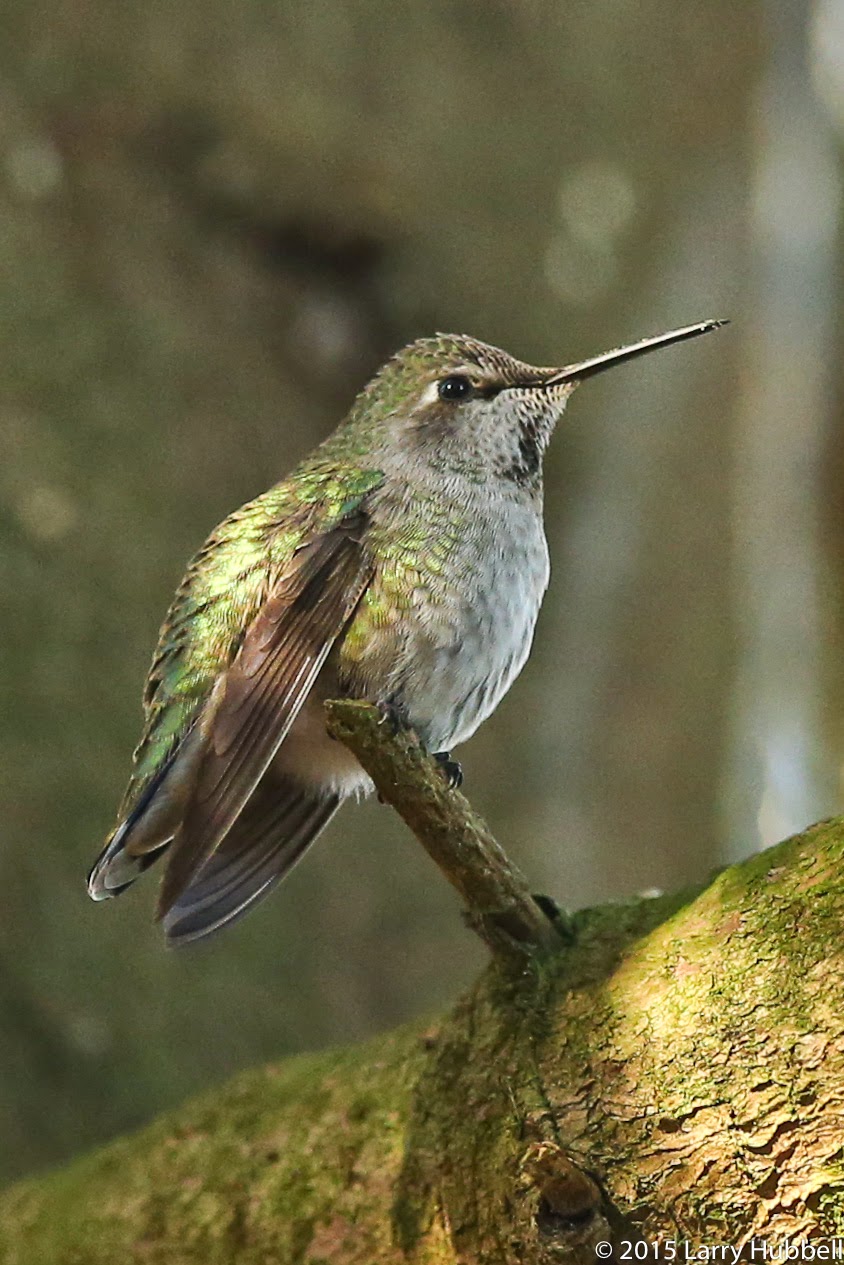 This particular bird worked the wells while Spot was away, and became so satiated it stopped to rest. It spent 11 seconds on this perch, which I suspect is a very long rest in hummingbird time. 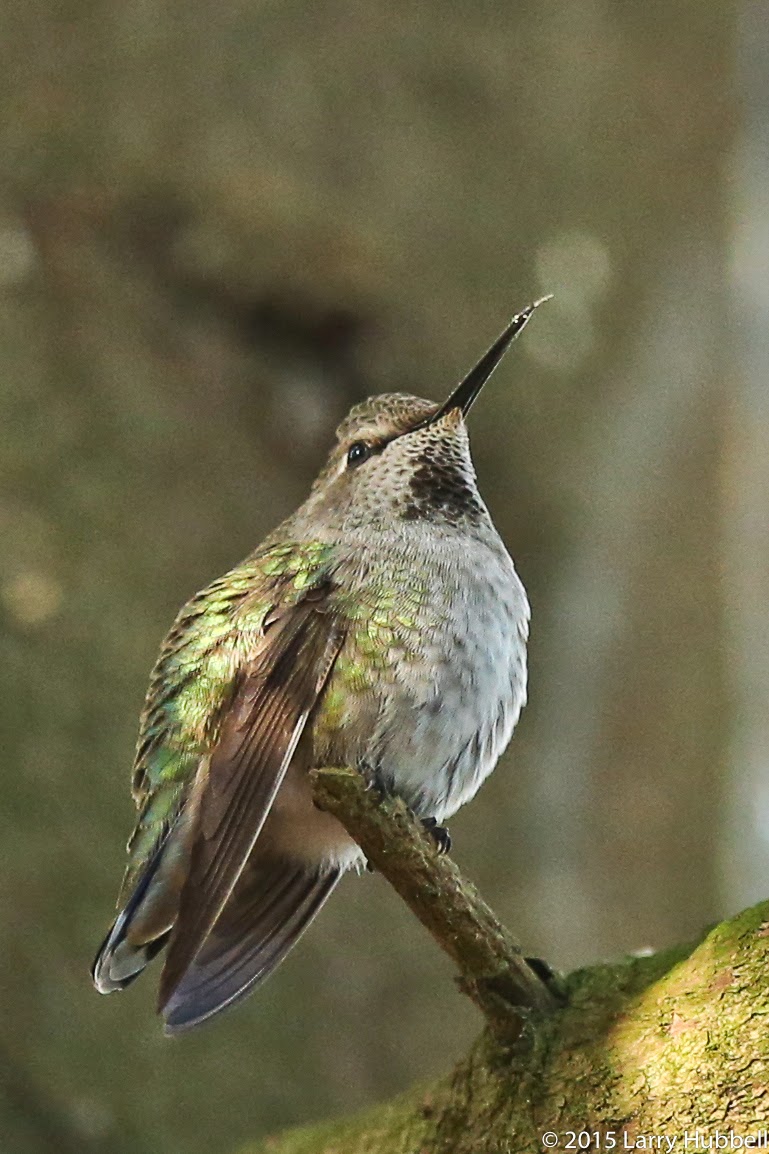 At one point it stuck out its tongue as if to lick its lips. 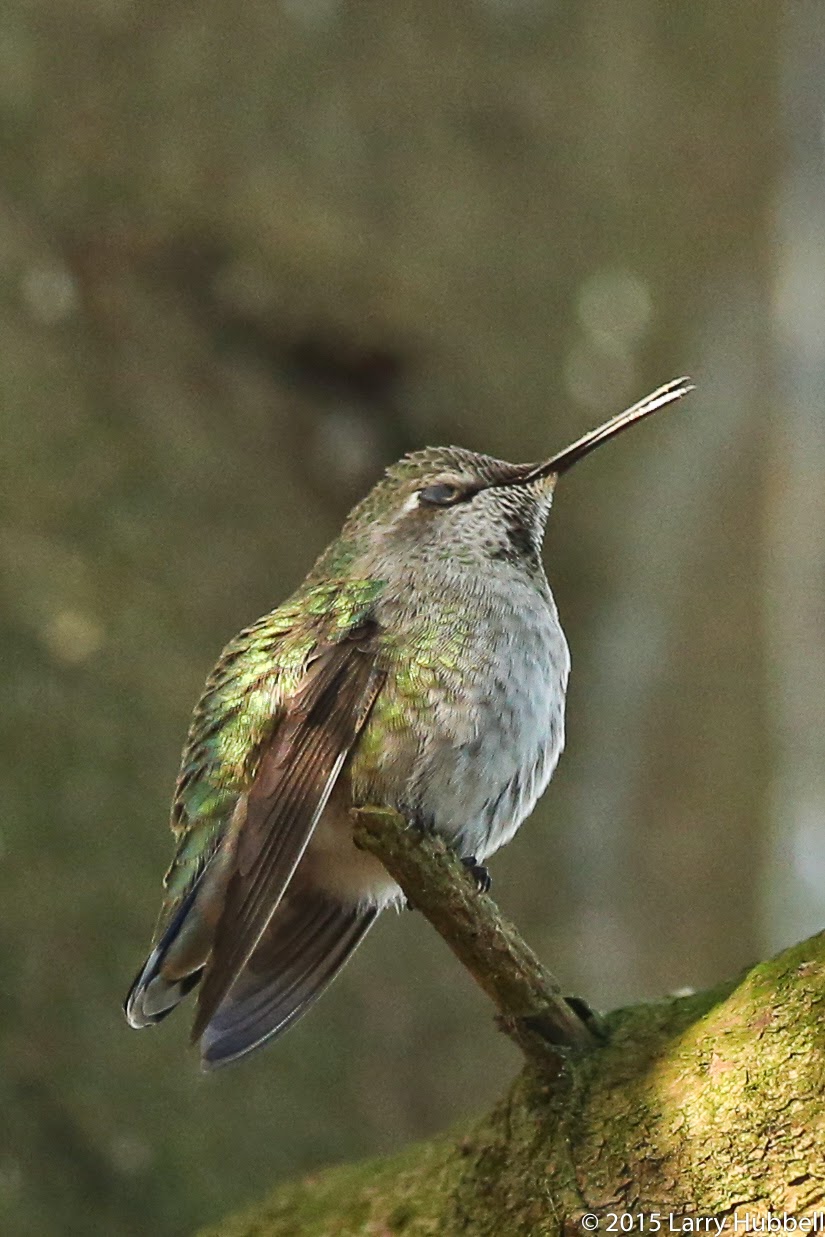 This was followed by what might have a been a small yawn. At least the eyes closed and the beak opened a bit. Then it went directly back to work. 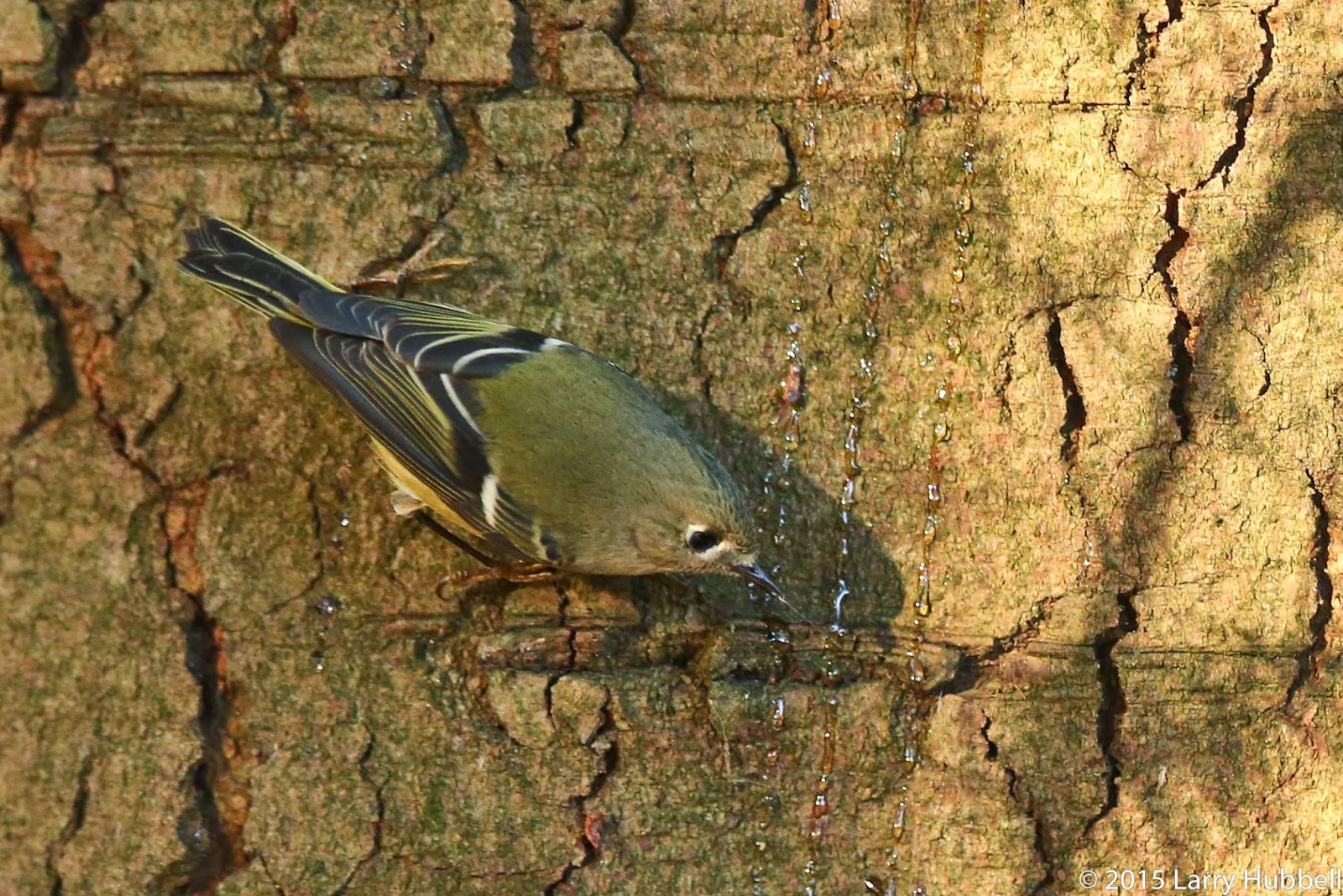 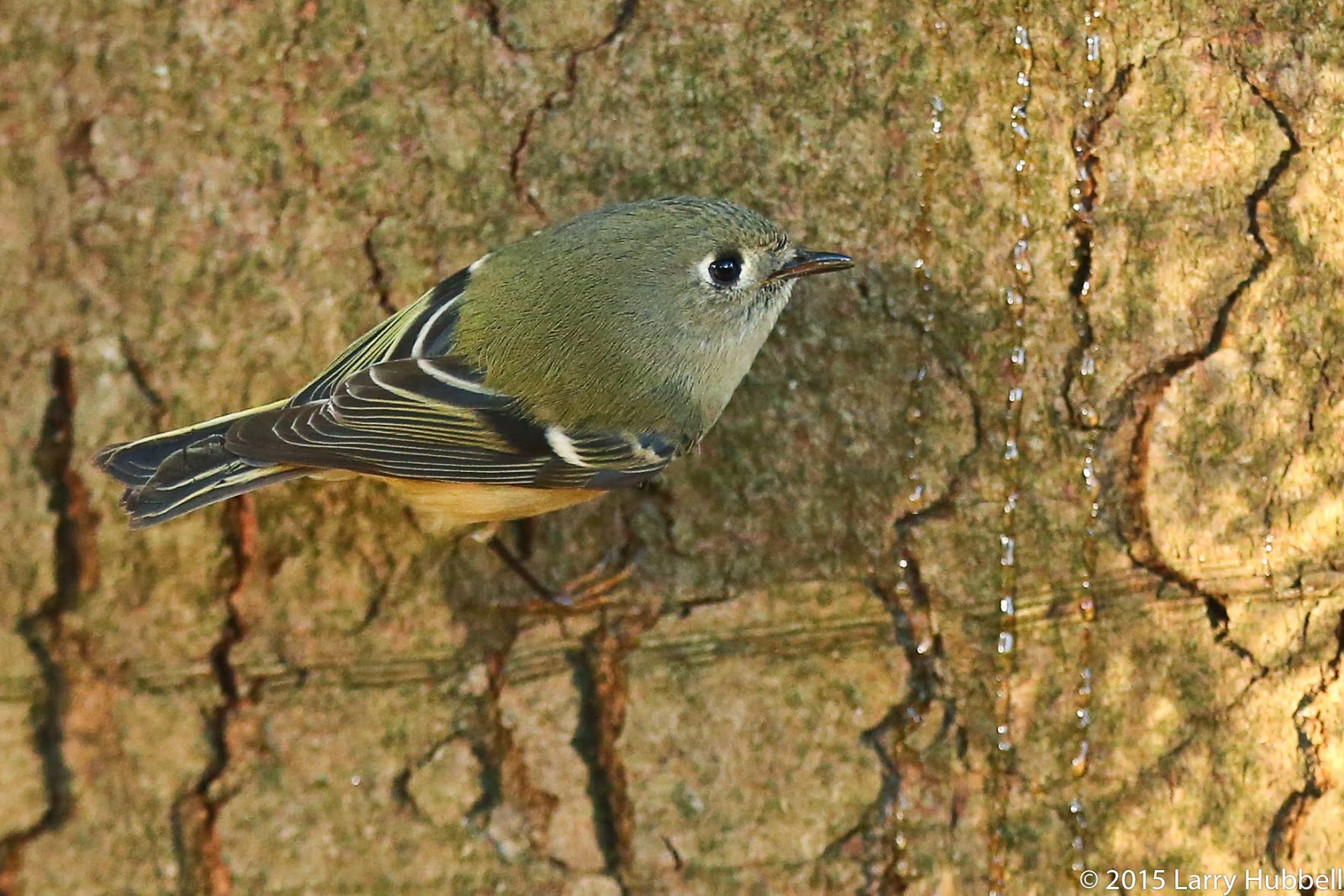 It is hard to see if they are picking tiny little bugs out of the sap or actually consuming the nectar. So far I am betting that they are eating sap. 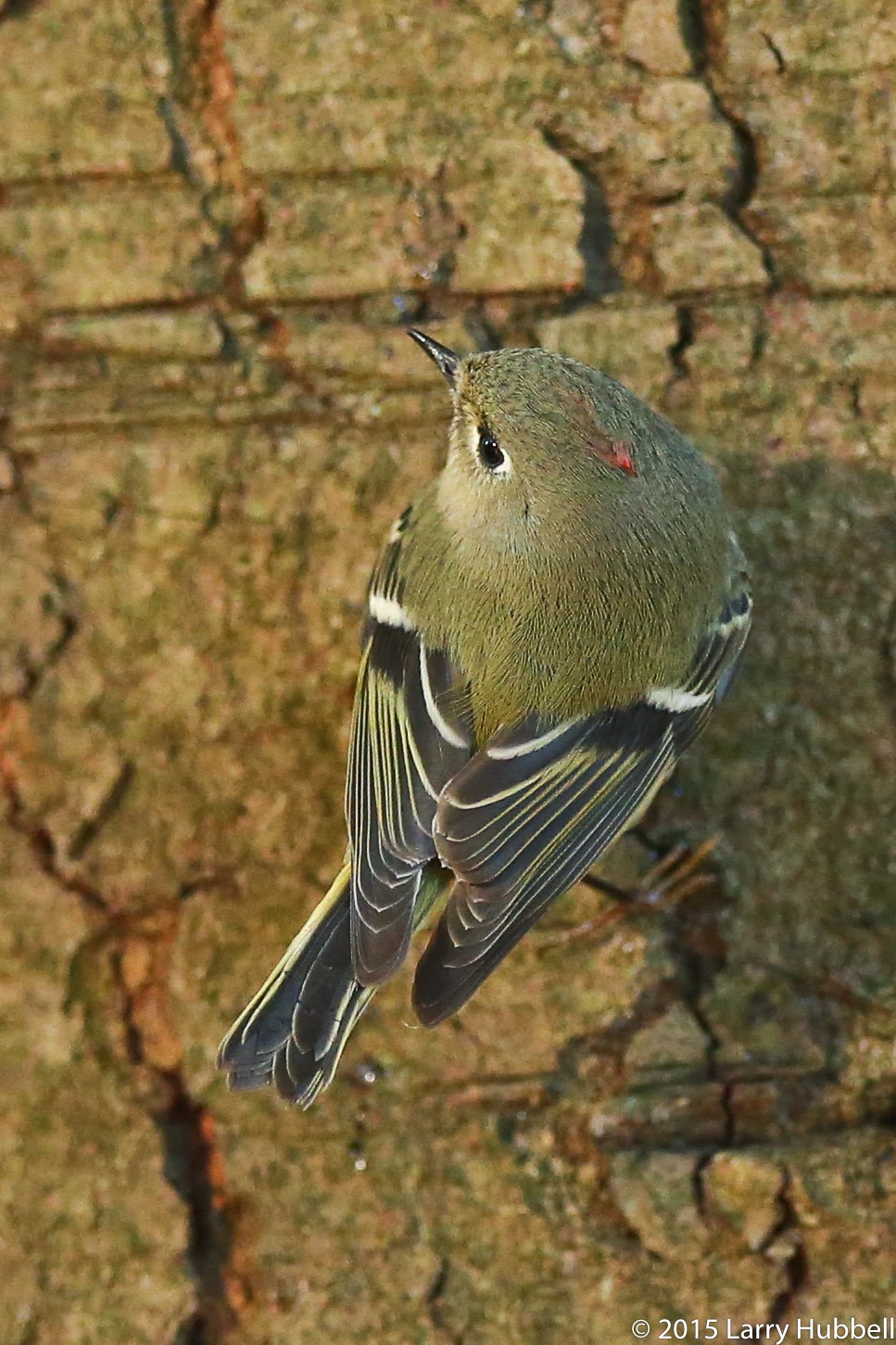 It can also be hard to see their ruby crowns. There is just a hint in the photo above.

For fun, lets see if you can tell the birds apart. 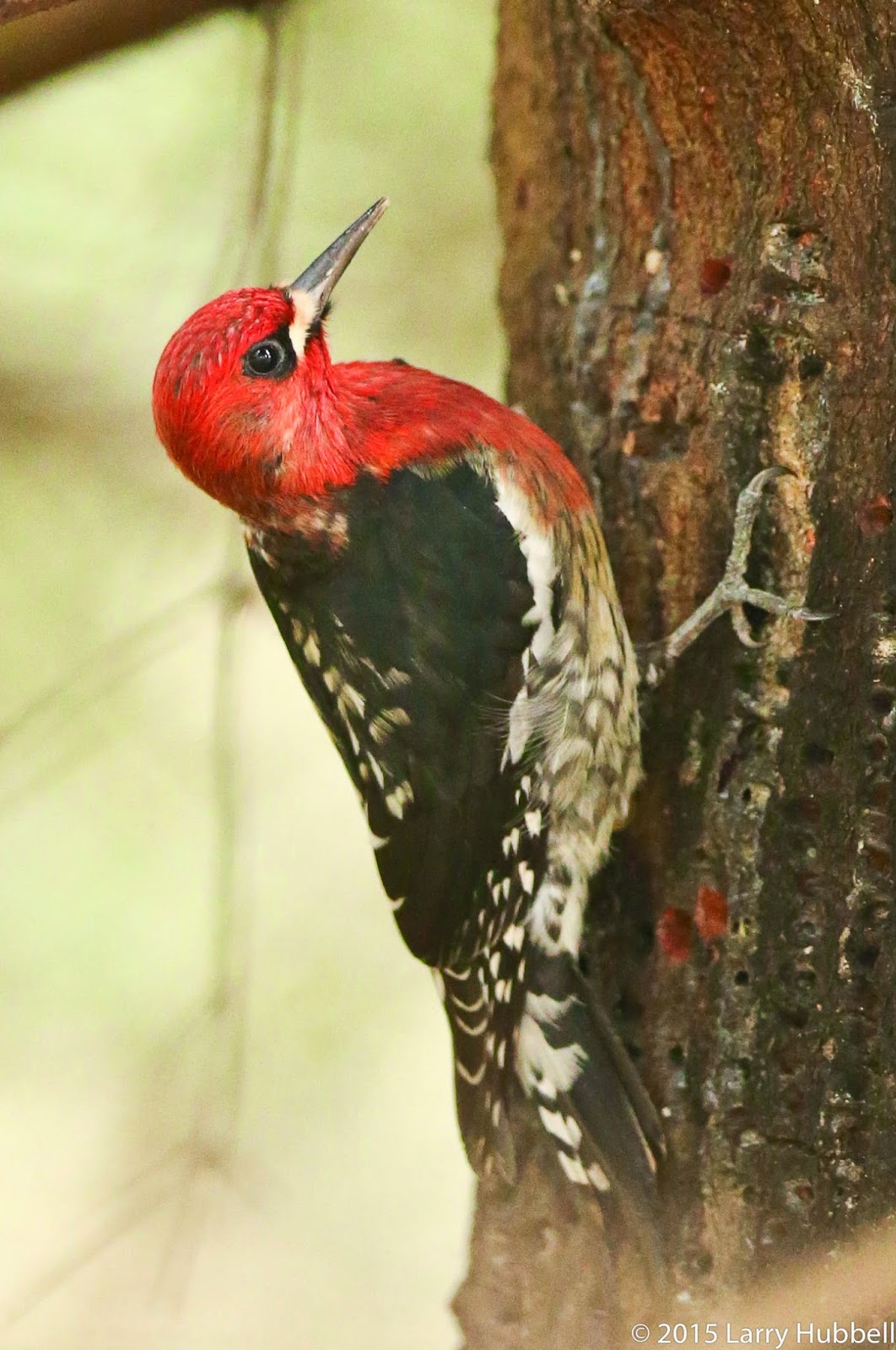 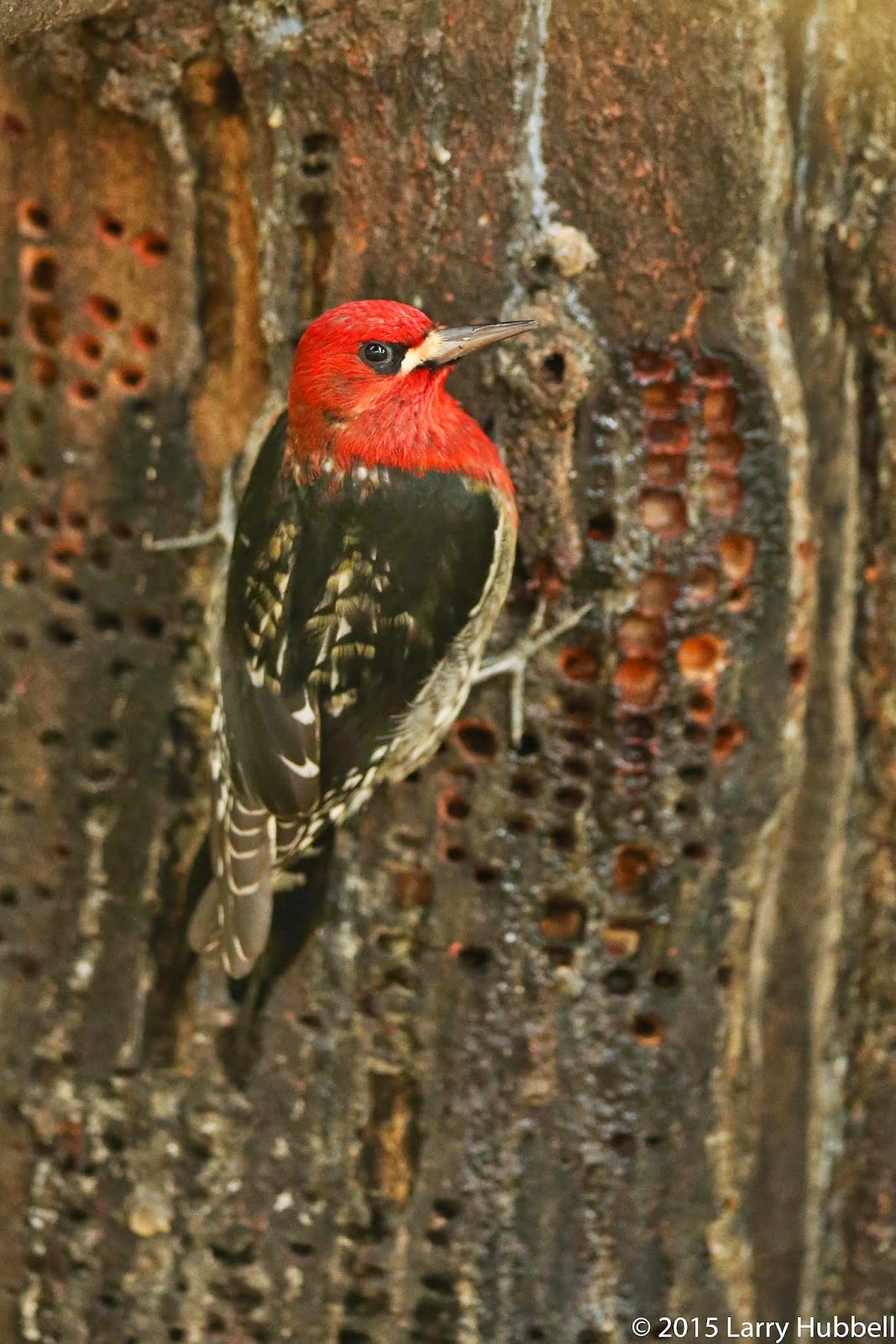 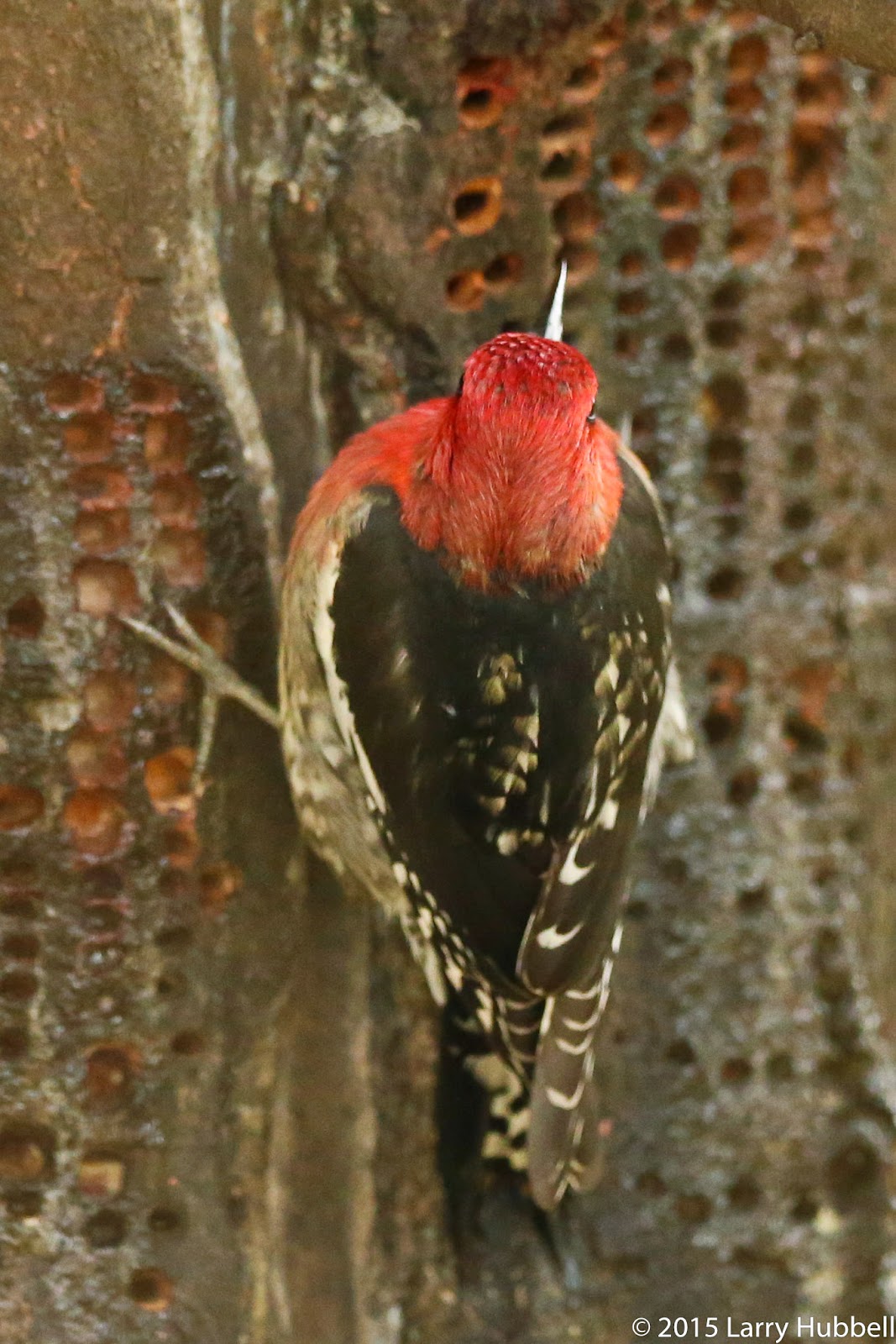 If you guessed Eric, Spot, Eric, Spot, Eric then you are correct. It is also interesting to look at Eric's eyes in the last photo. He (or she) is turned 180 degrees away from the camera, but we can still see a hint of the eyes. Imagine being able to see in a 360 degree circle. It makes me dizzy just thinking about it. 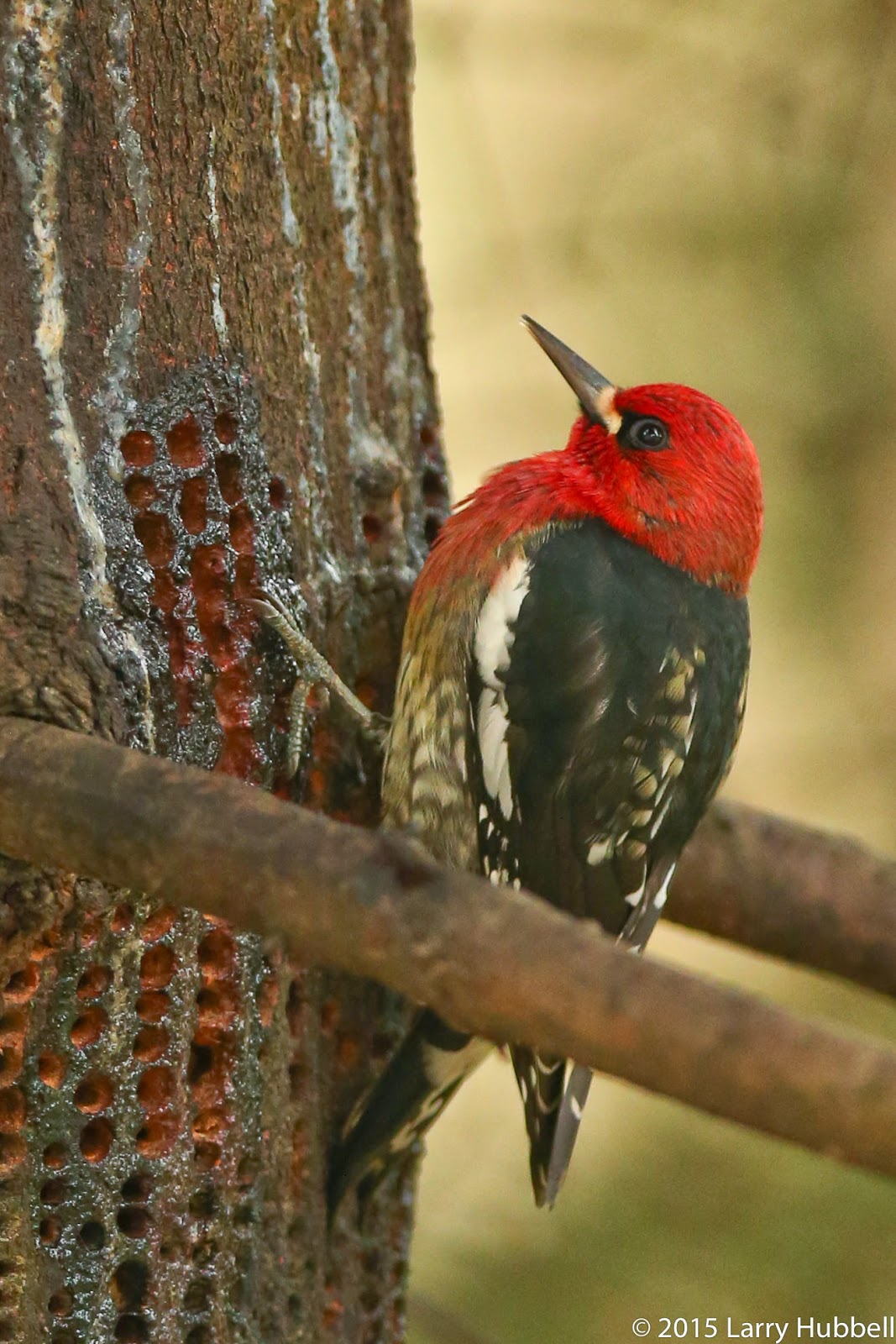 You also might want to compare this last photo of Eric to the very first one. In this photo Eric scrunches down in a heat conserving posture, while in the first photo Eric was stretching, the difference in the apparent size of the bird is amazing.

There is a surprising international aspect to this post. Spot is working on a European fir, Eric is using a North African spruce, the squirrels are gray squirrels from the east portion of North America, the Anna's hummingbird has recently started spending winters this far north. It is only the kinglet and the sapsucker whose ancestors would have wintered around Union Bay.

Also, even though the sapsuckers are hard on the trees, they are certainly good neighbors. Whether they intend to or not, they help others by sharing the wealth.

Have a great day on Union Bay…where natures lives in the city!