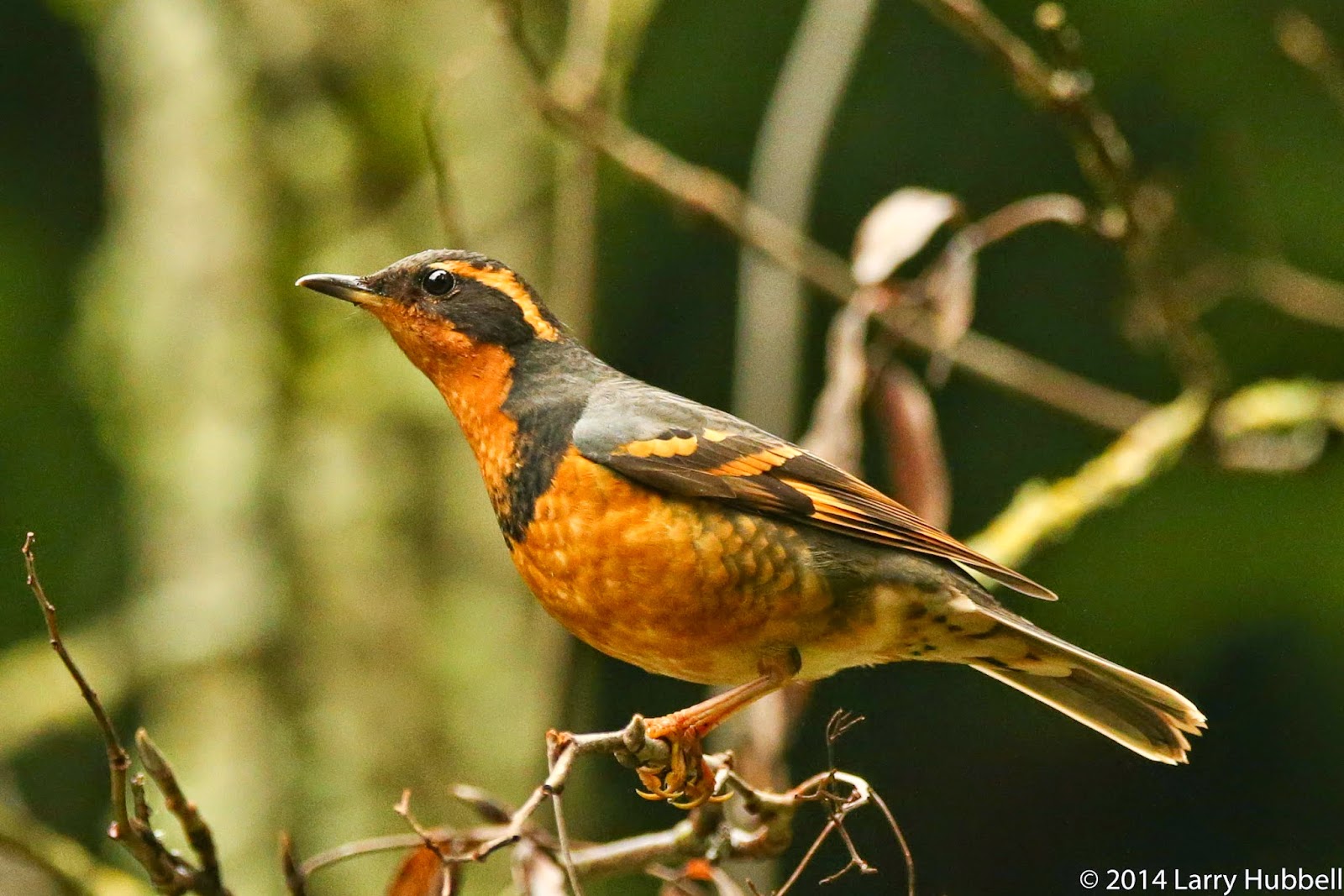 The varied thrush is a quiet and shy bird. They usually fly at the slightest disturbance. The Cornell Lab of Ornithology says they prefer to live in forested areas of at least 40 acres. We are very lucky to have them residing in the Arboretum inside the city of Seattle. Due to the dark grey coloring this bird is most likely a male. 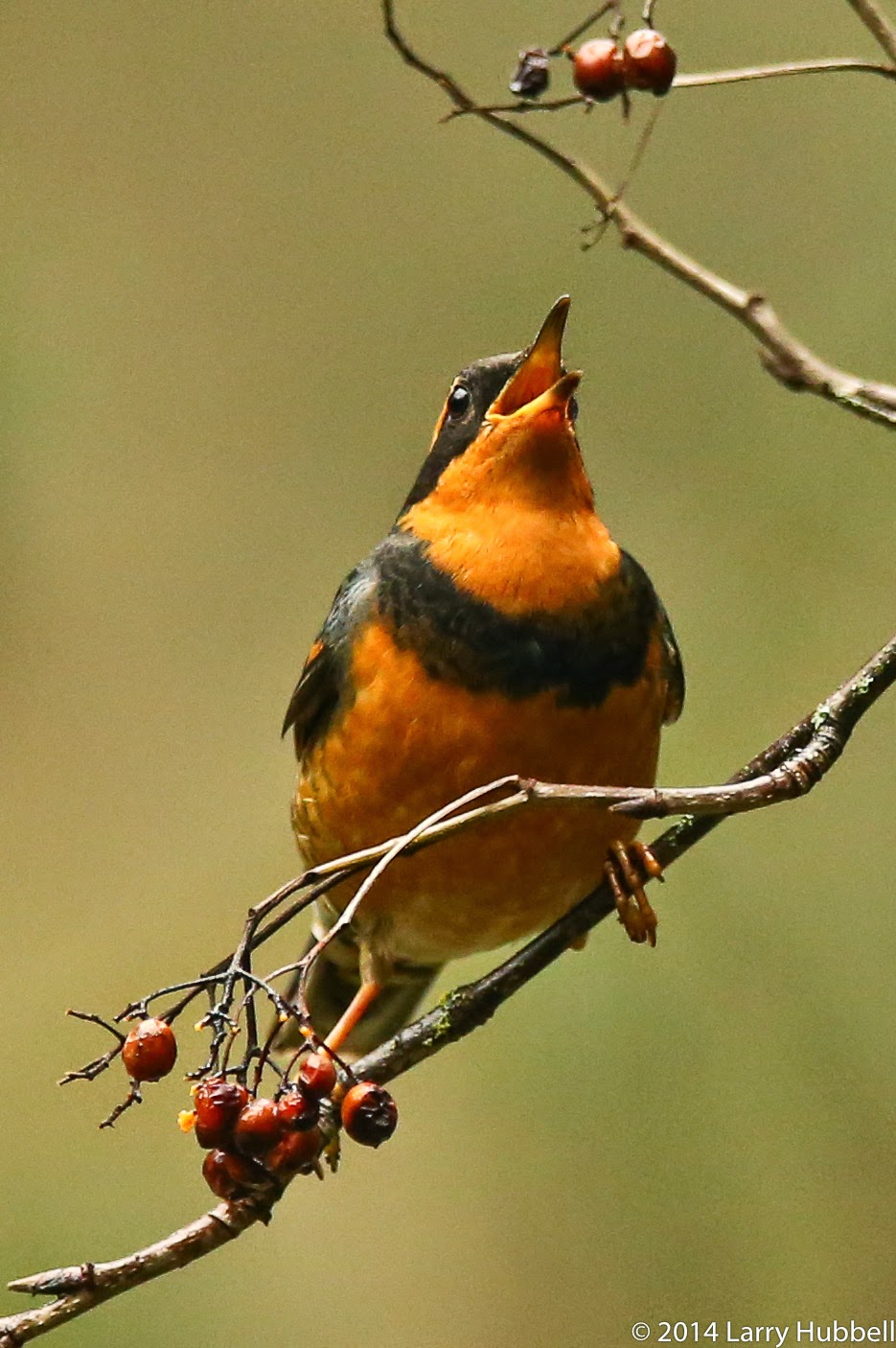 They are supposed to prefer fruit in the winter and insects in the summer. 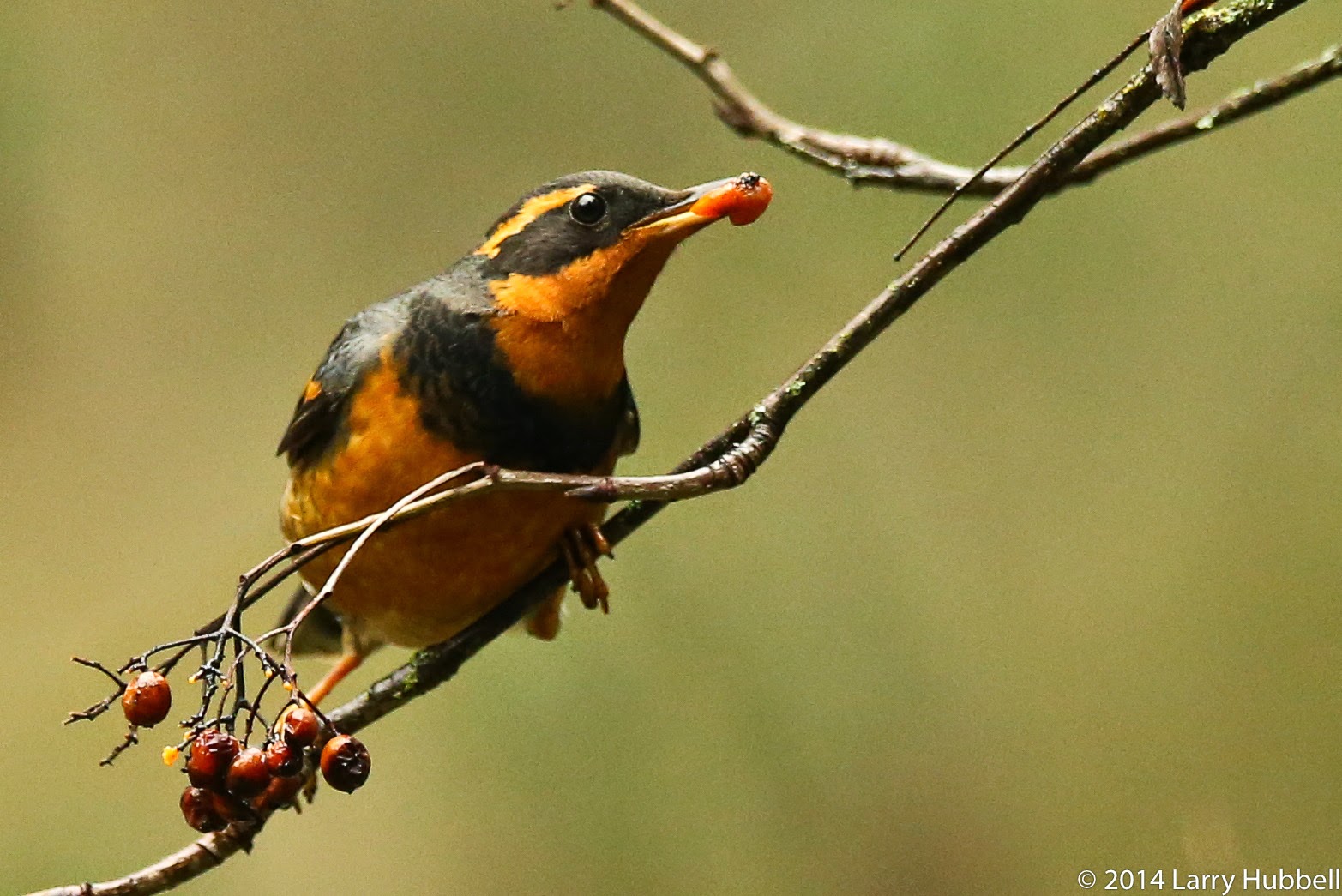 These December photos show they certainly like the mountain ash berries. 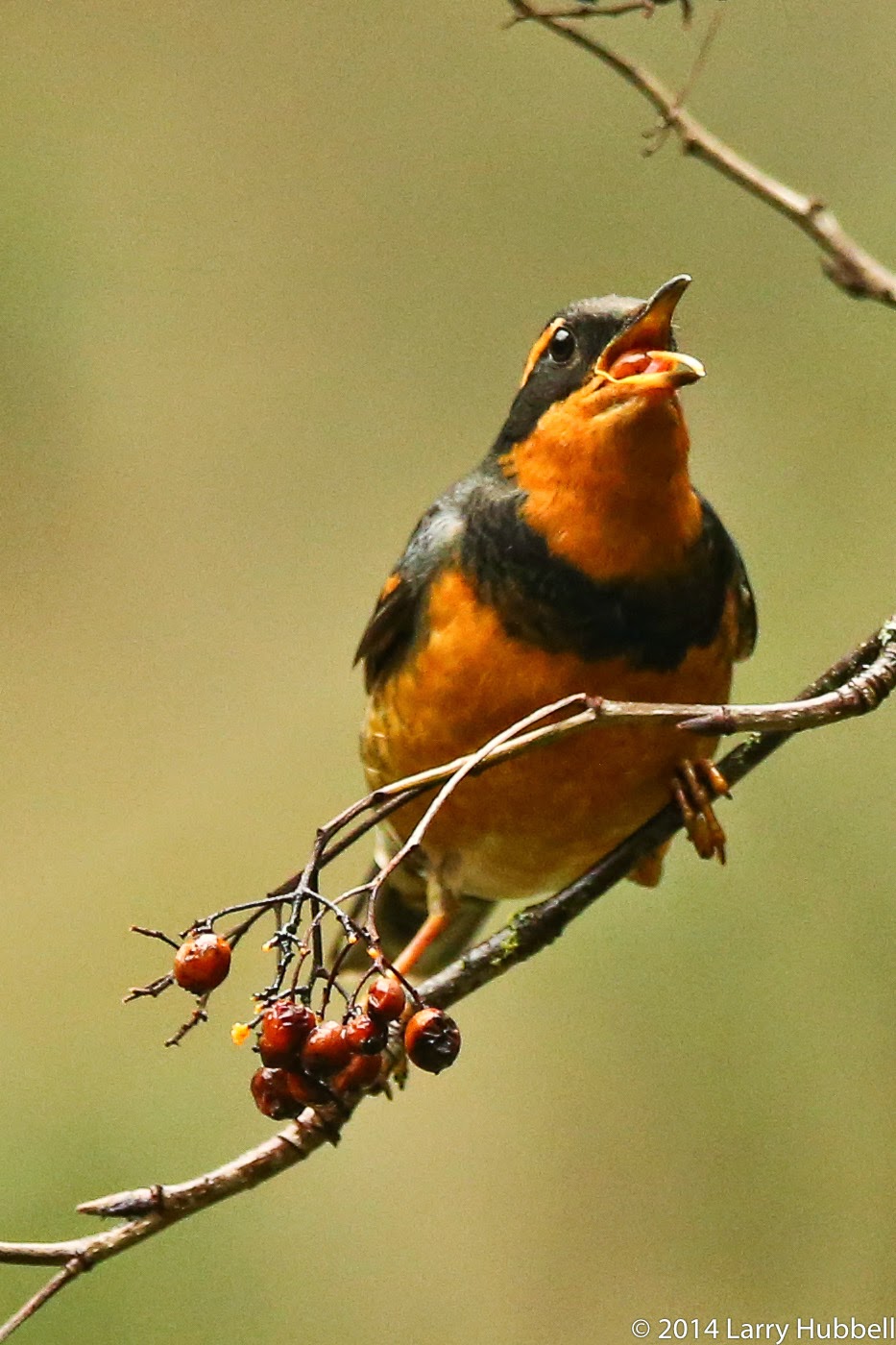 Curiously, it looks like the bird's tongue has a notch on the backside to help push the fruit down the throat. 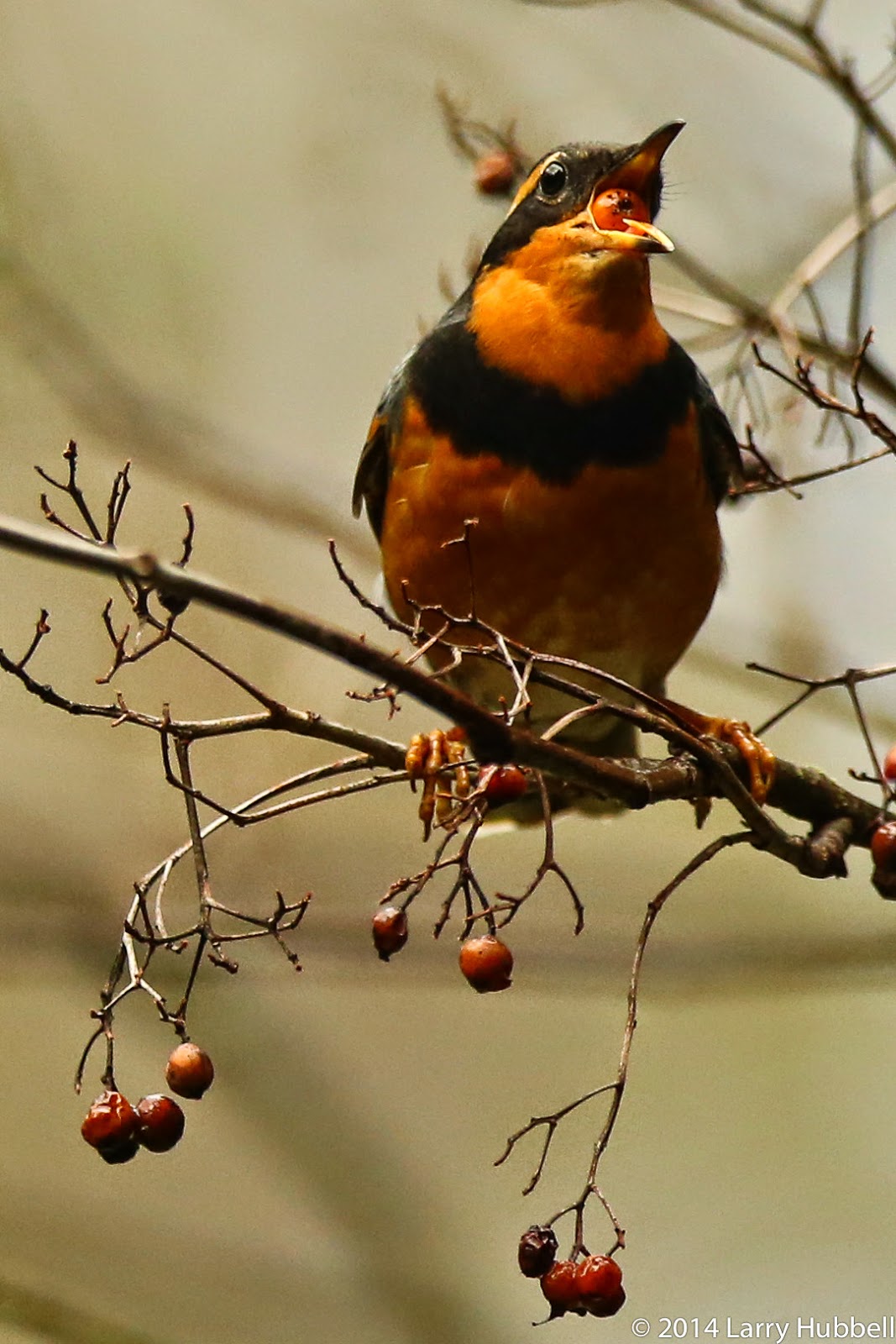 Here is a second bird, in a similar pose, where the shape of the tongue seems even more obvious. 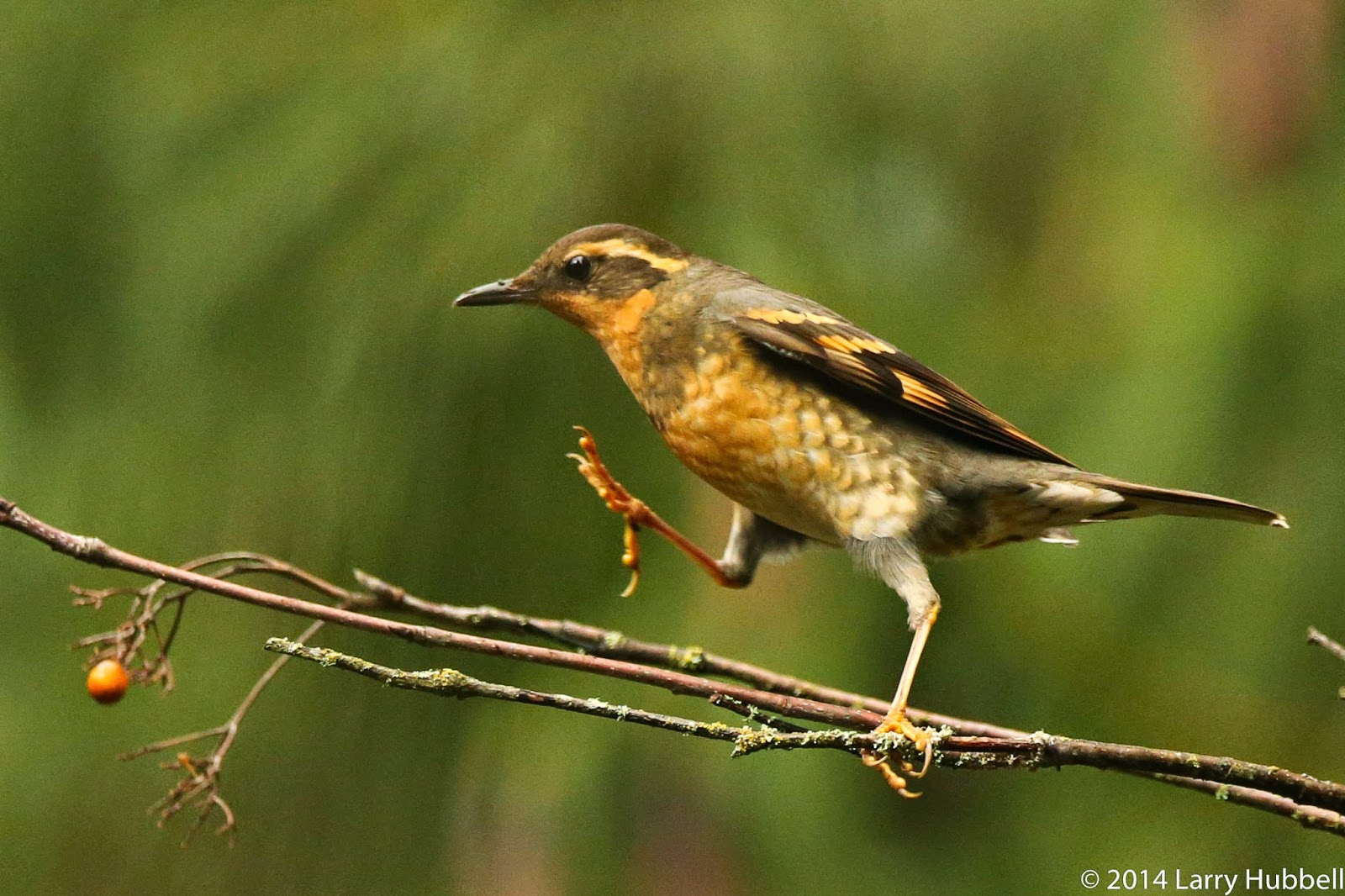 The females have more of a dull brown color as opposed to the dark grey of the males. 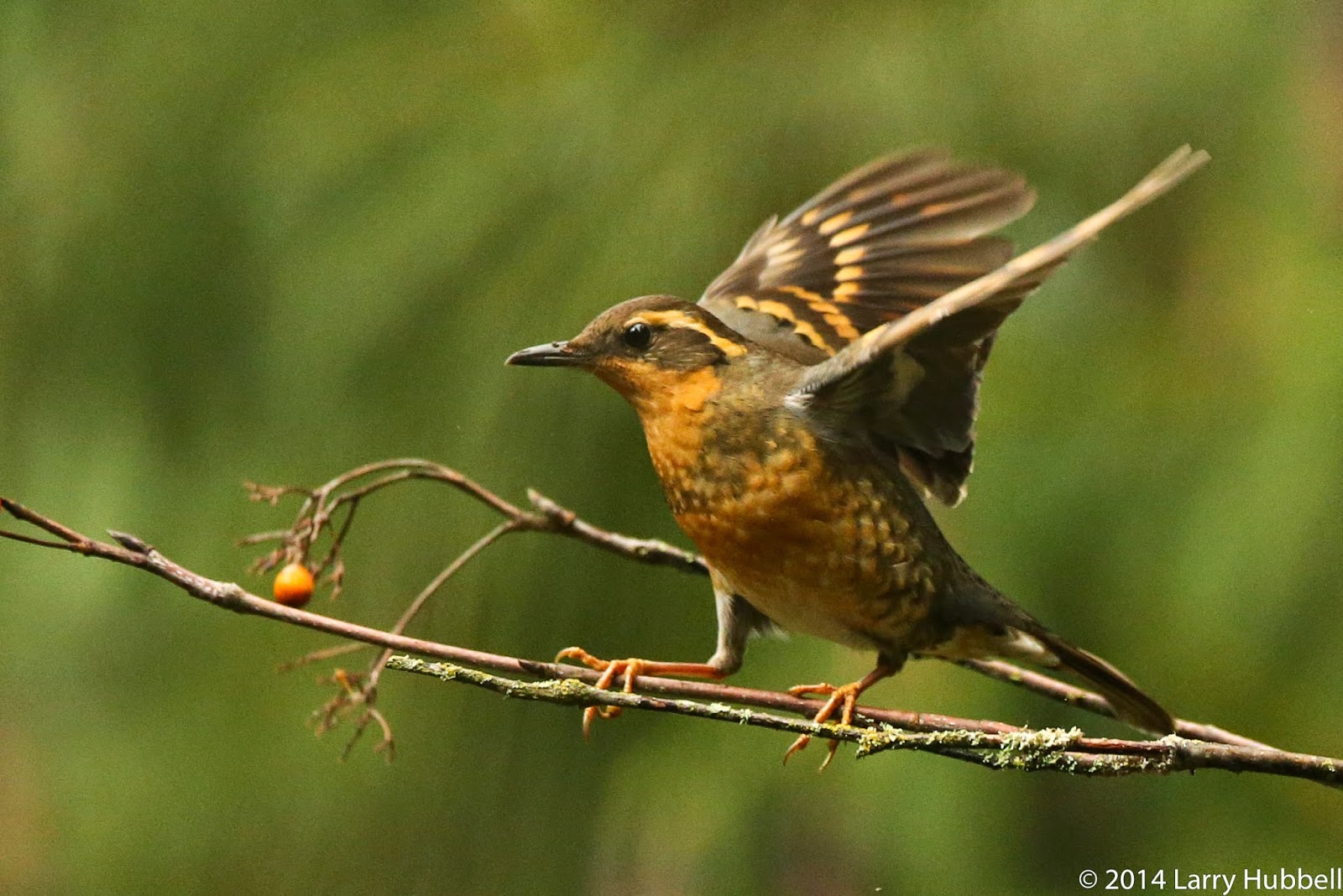 I wonder how the birds pick which berries to eat. 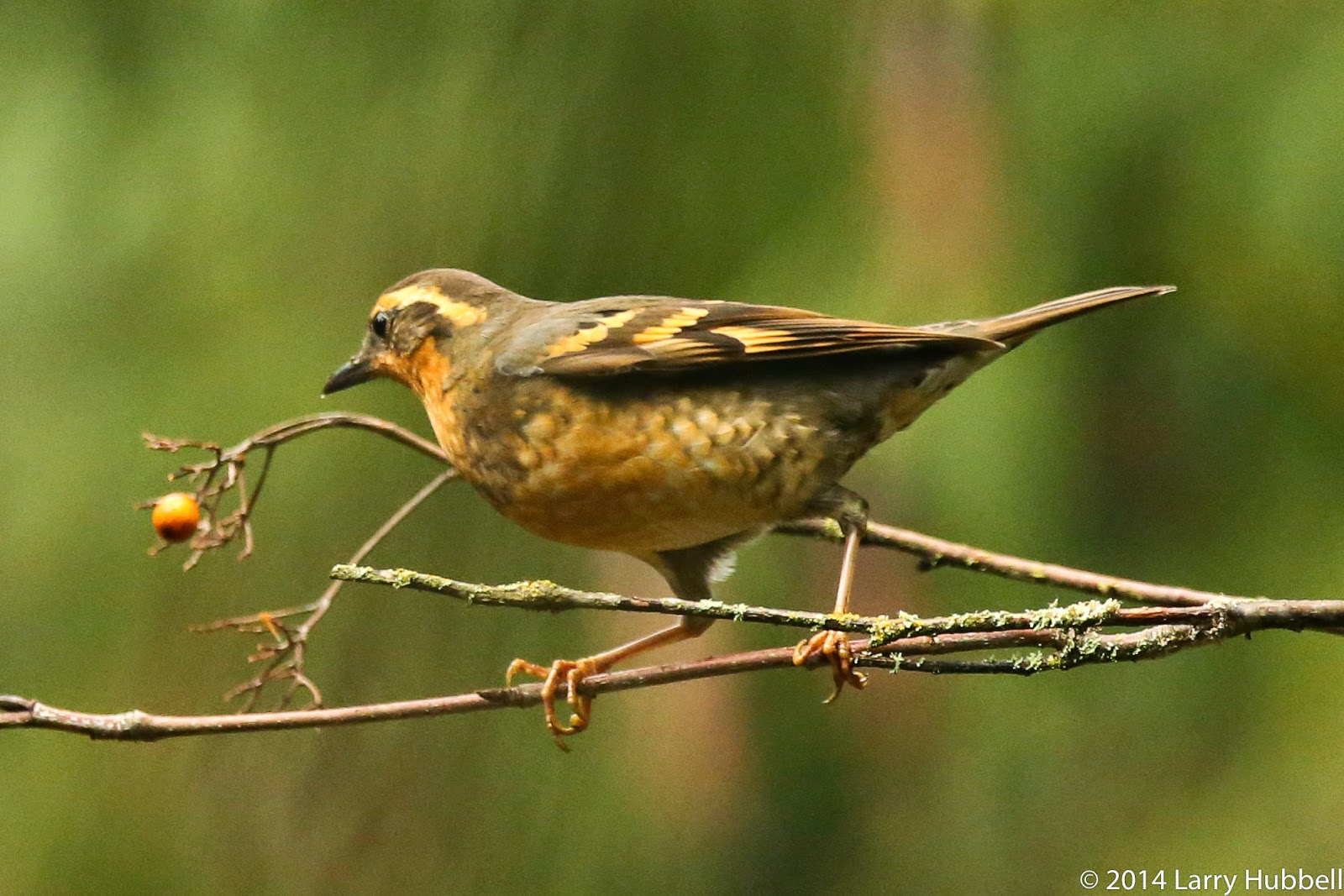 This bird goes after the last berry on the branch… 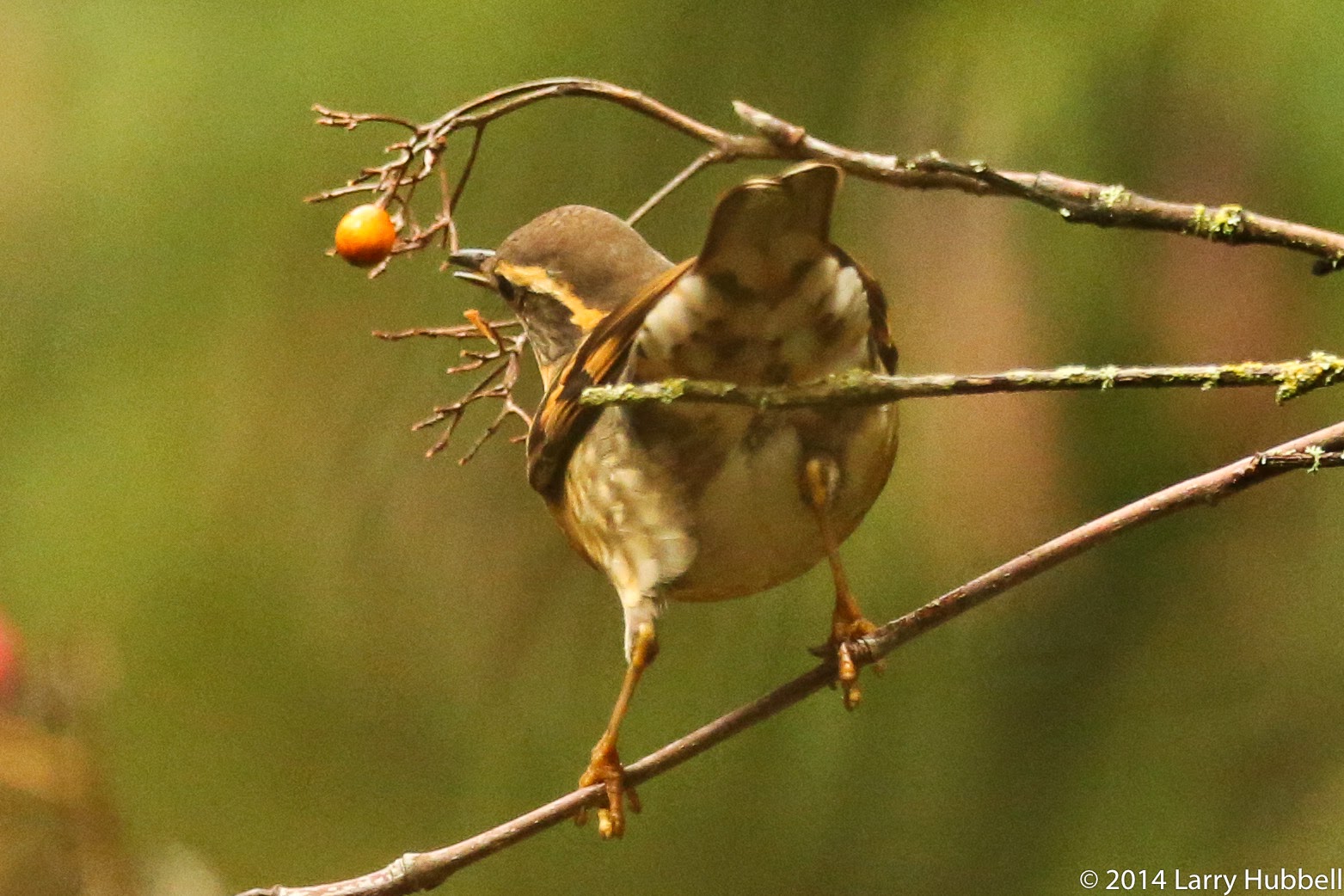 …which would seem to imply they will consume every last morsel, but that is not the case. 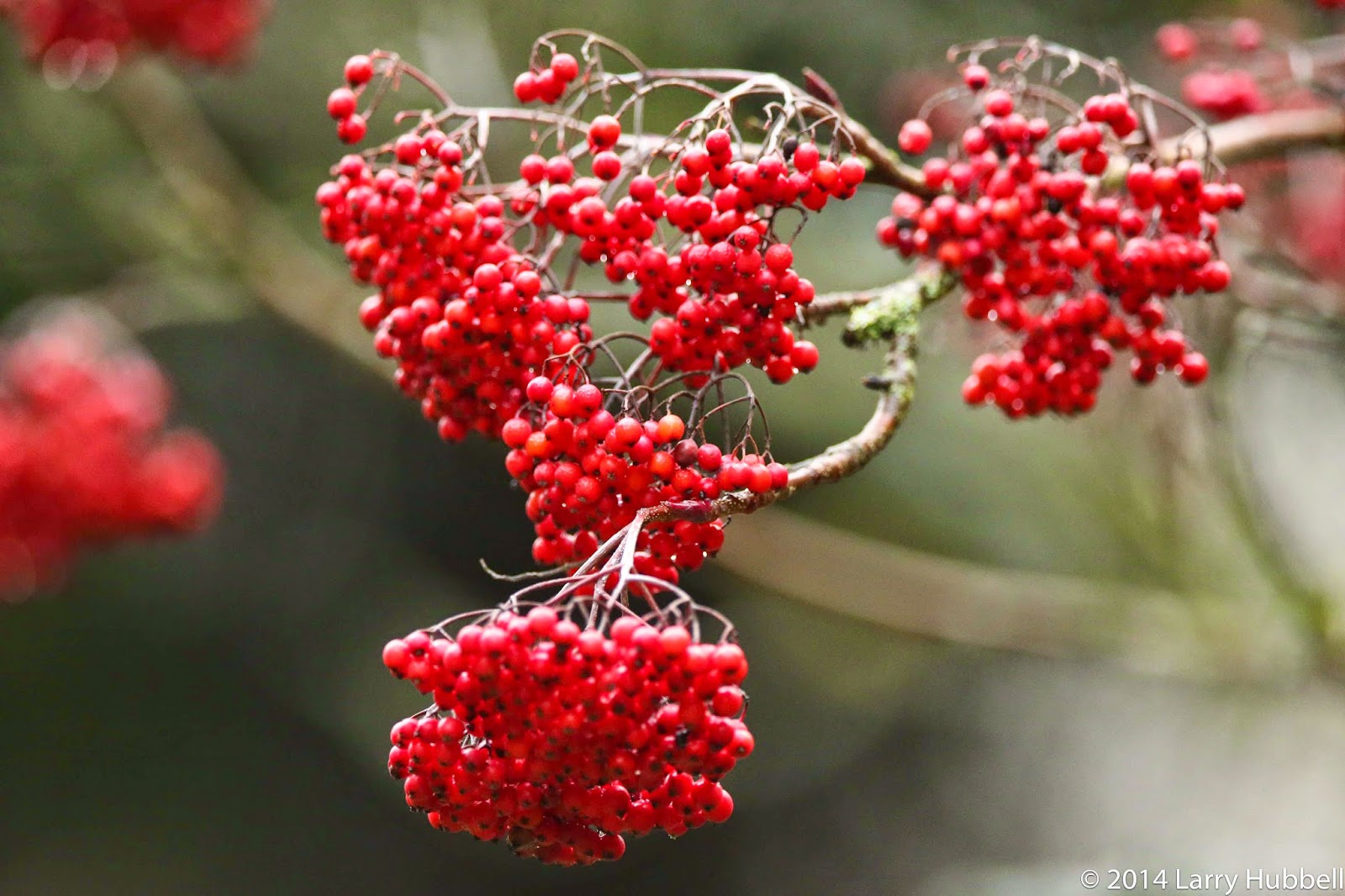 Less than one hundred feet away sits this tree fully laden with berries. A week or two earlier the varied thrush worked this tree. Surprisingly they abandoned it in favor of the shaded tree, shown in the other photos, which has far fewer berries. 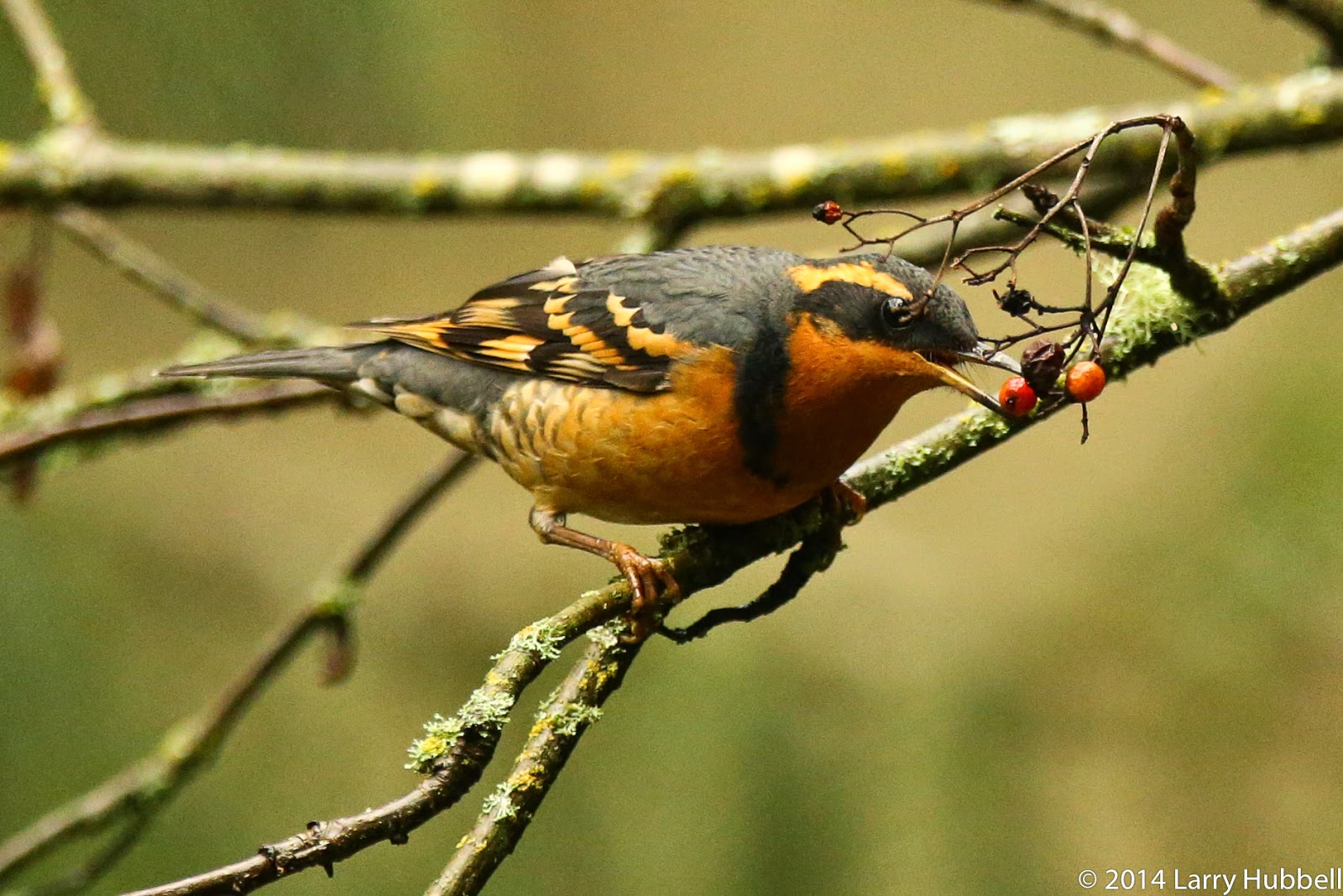 There must be something particularly appealing about these berries. 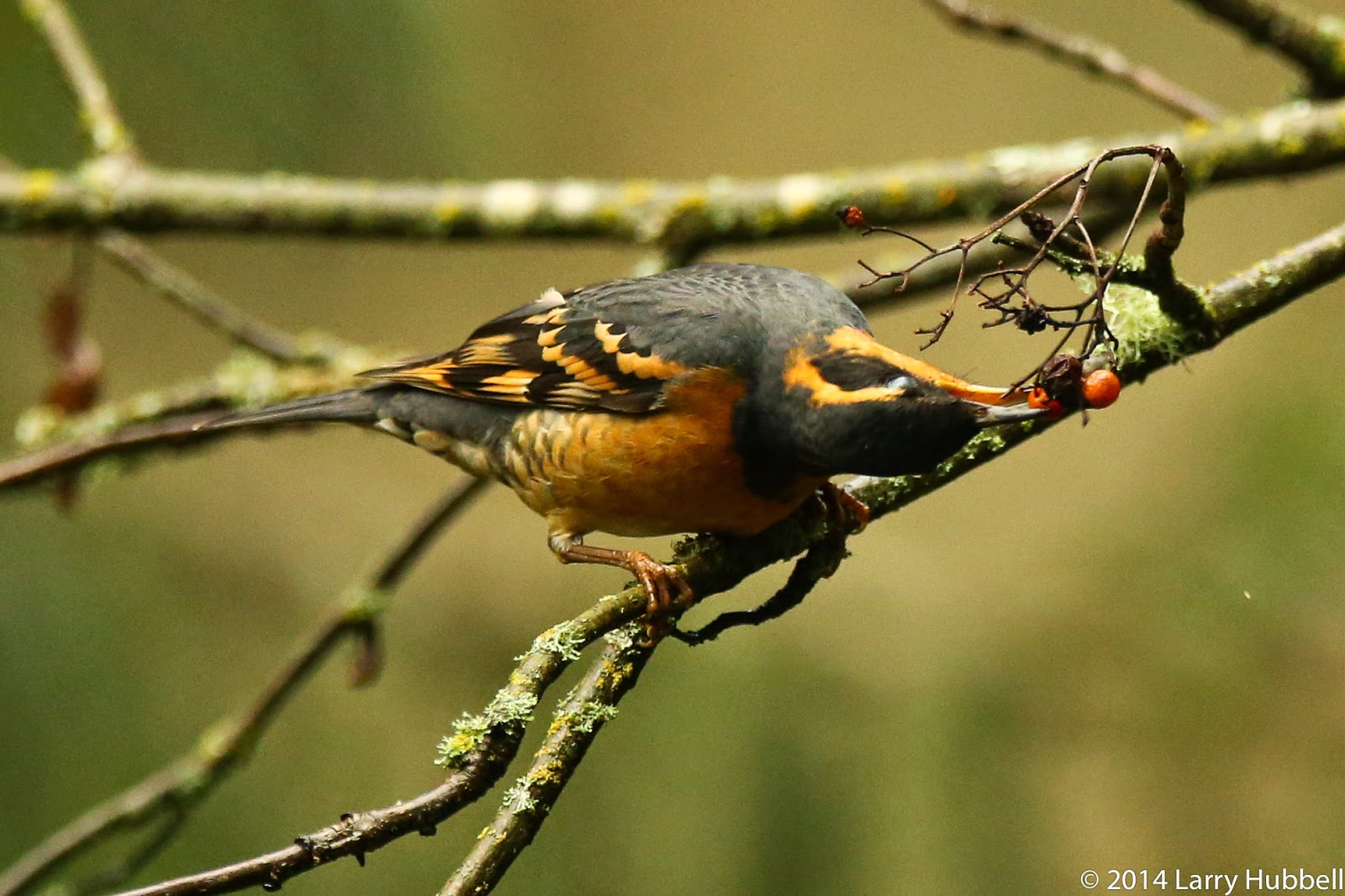 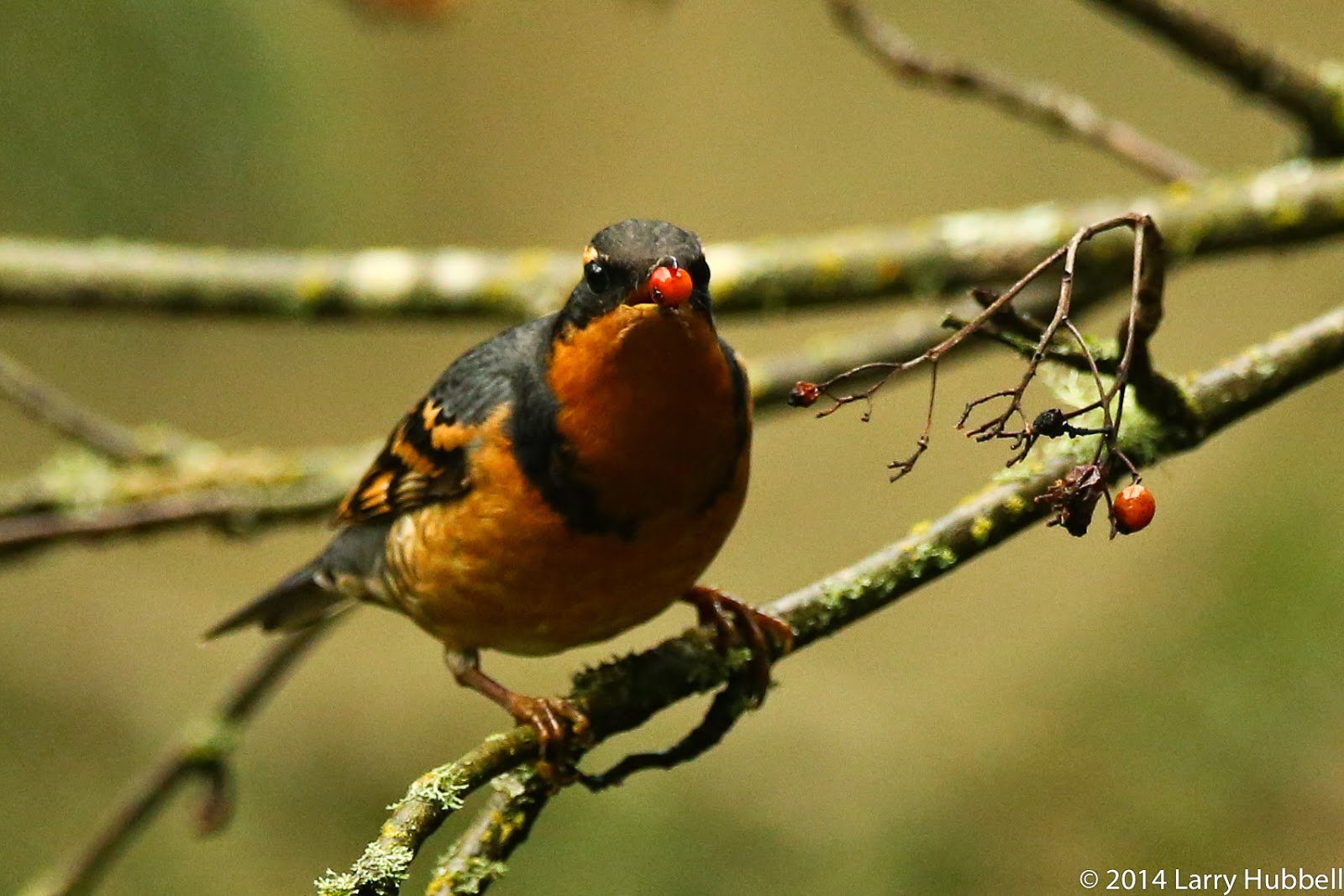 …or an expensive piece of chocolate. 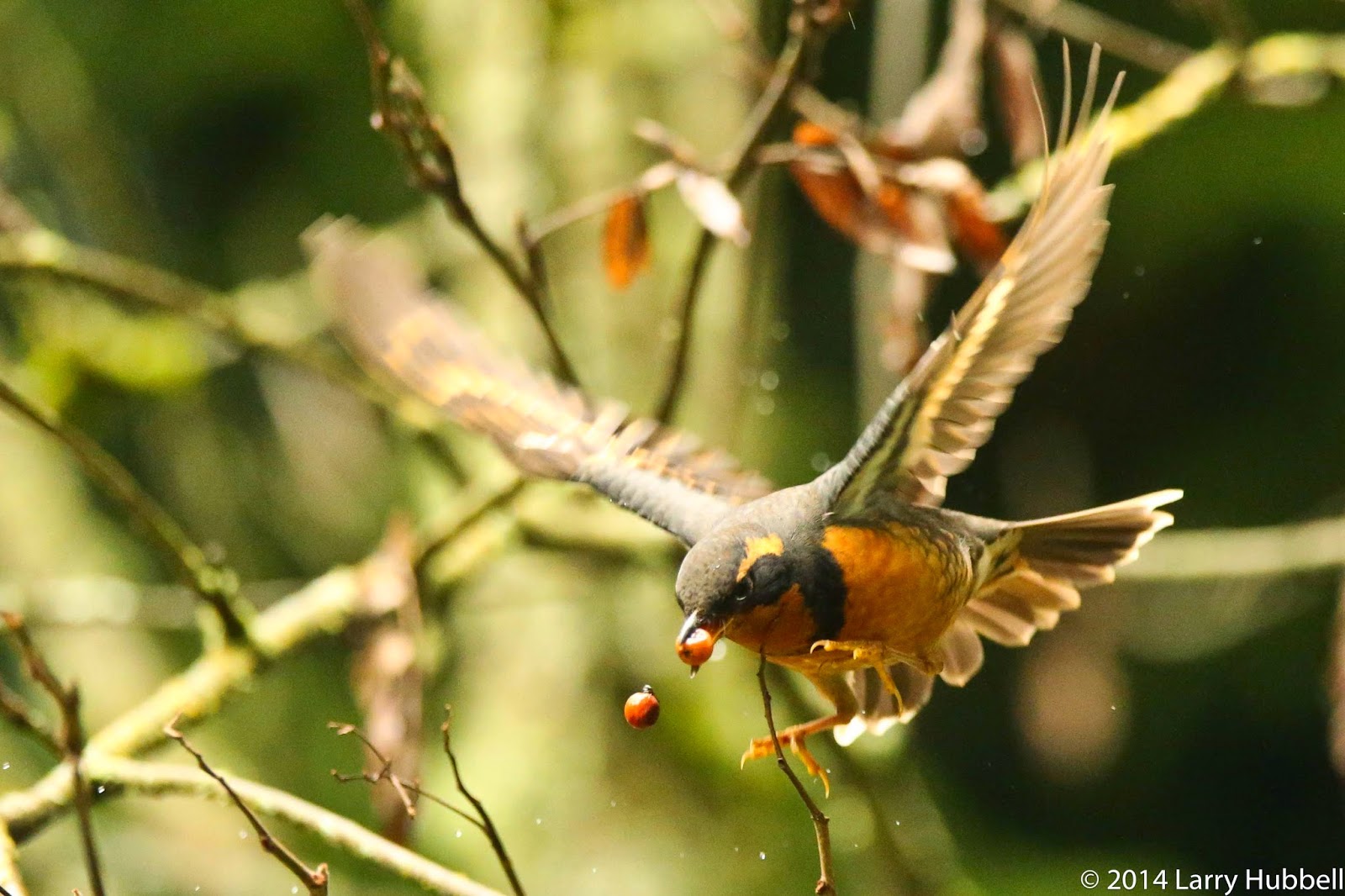 Being able to fly helps the discriminating thrush find... 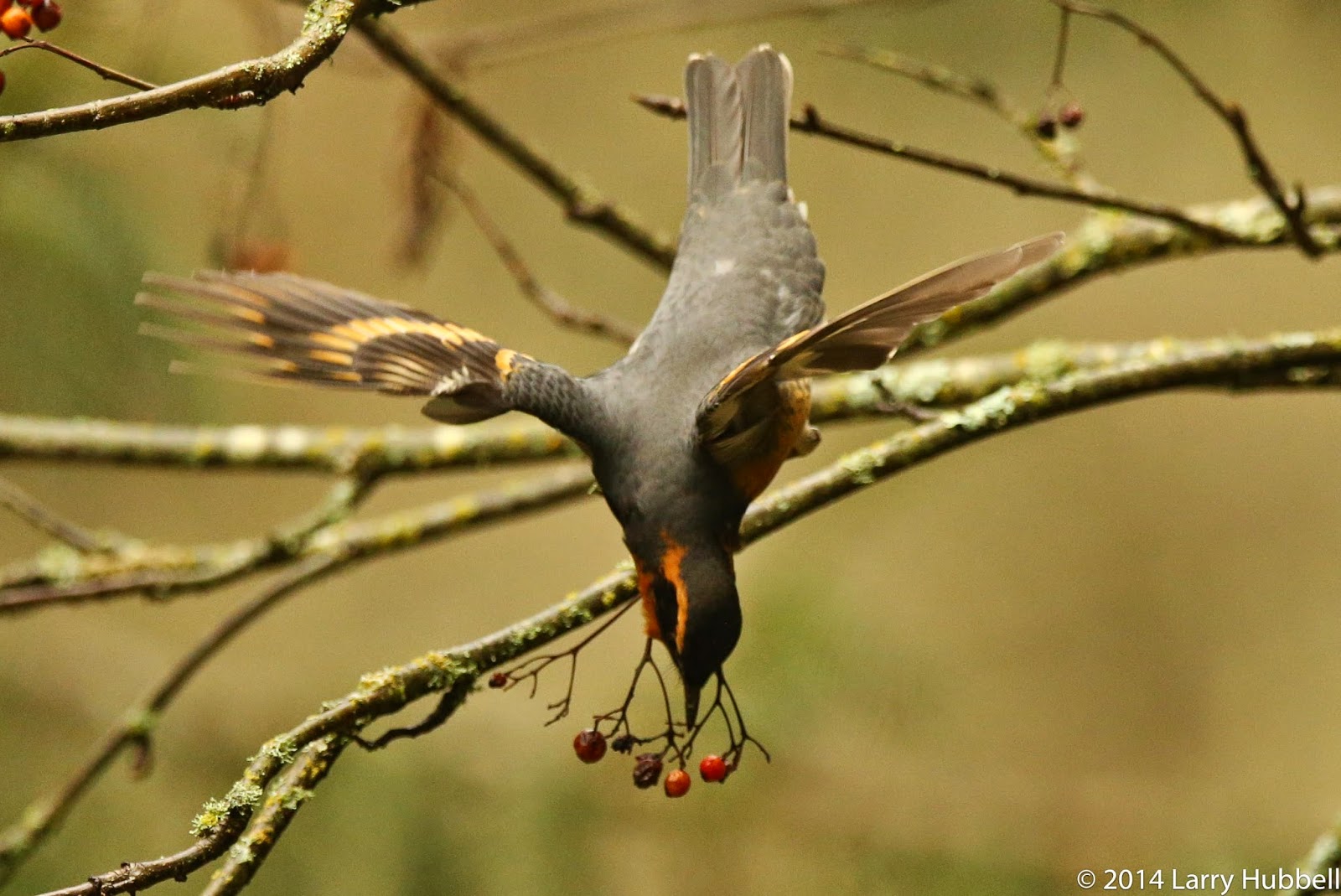 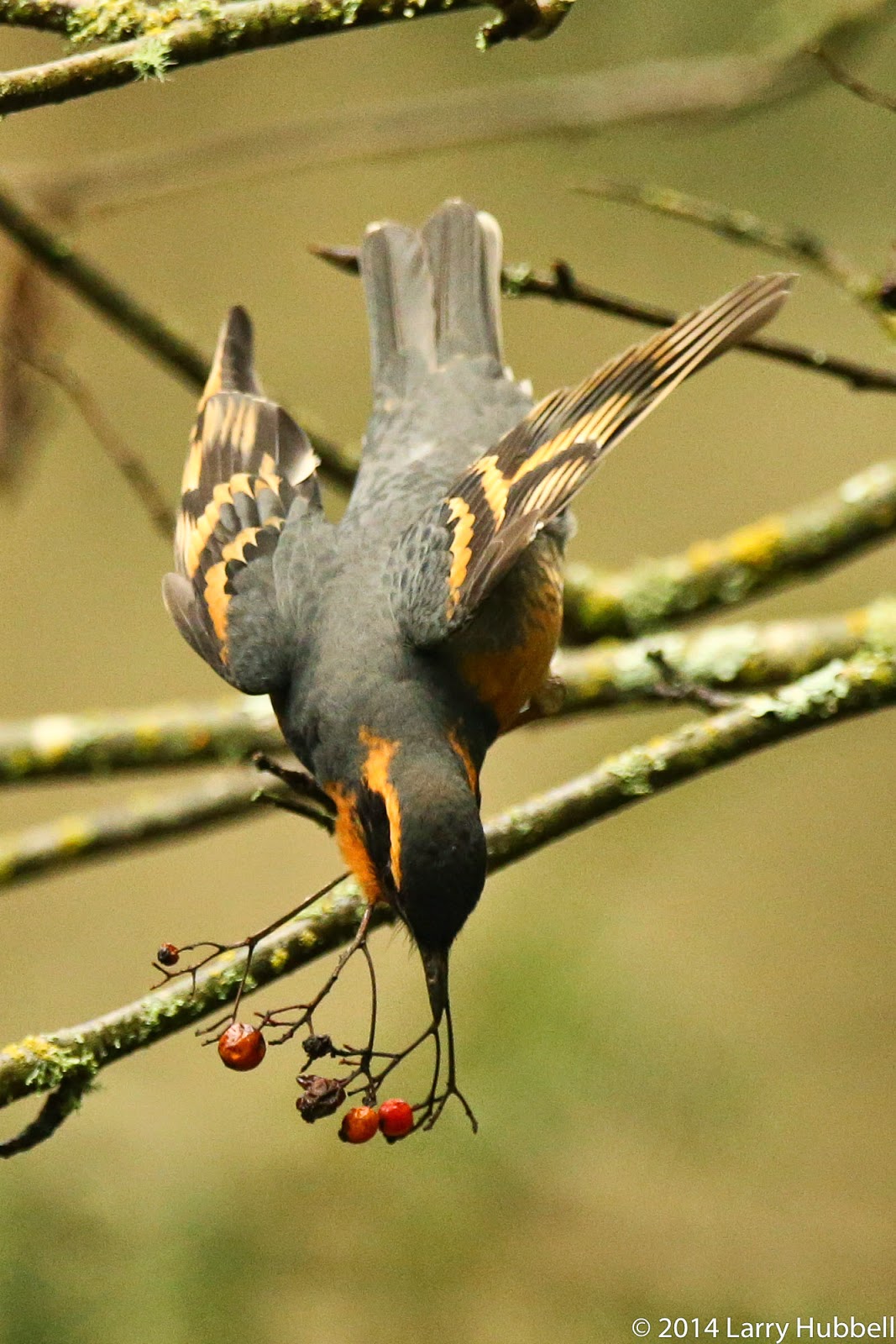 (Did you notice the patterns on the wings. 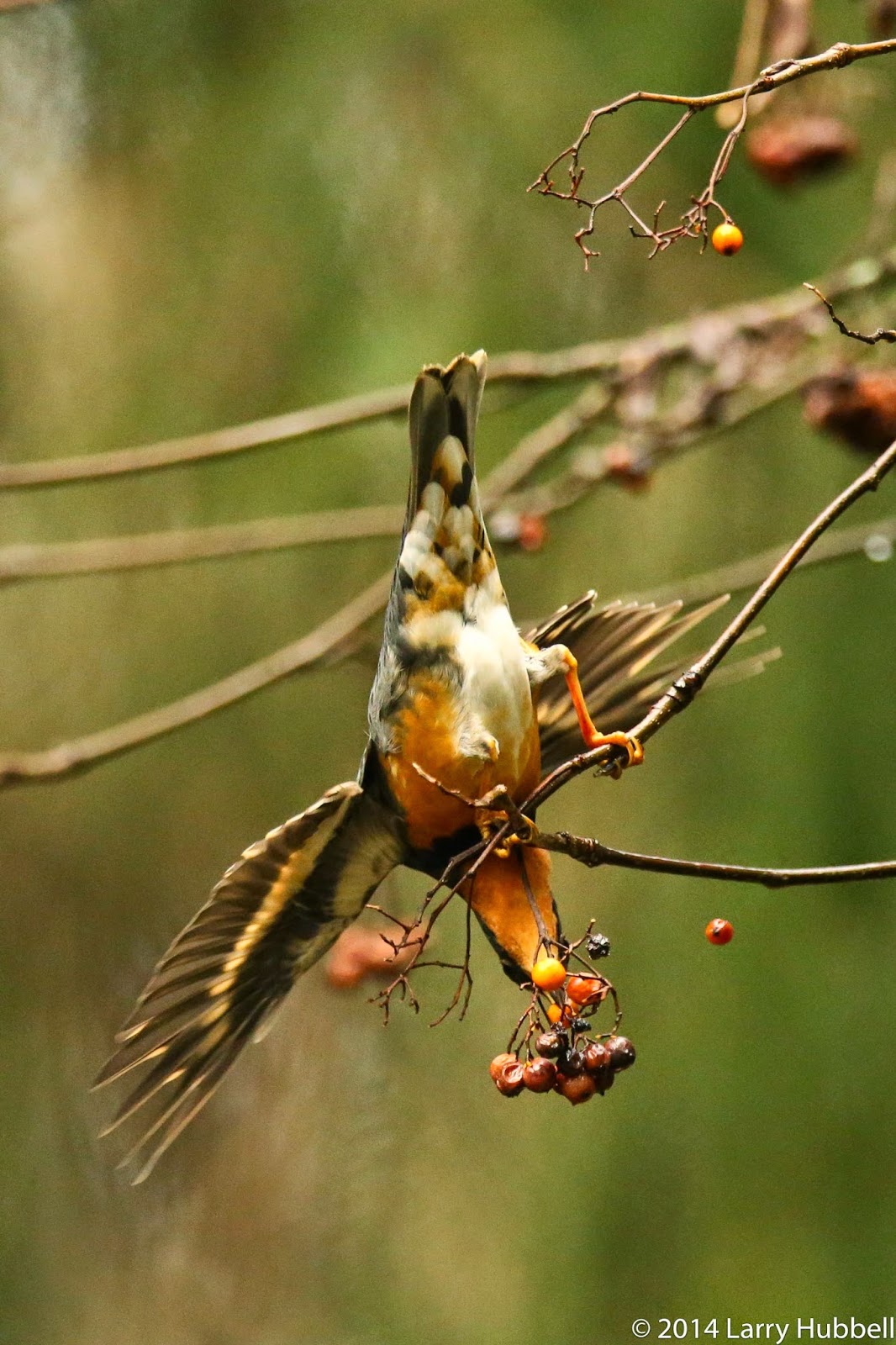 The patterns from this angle are much lighter.) 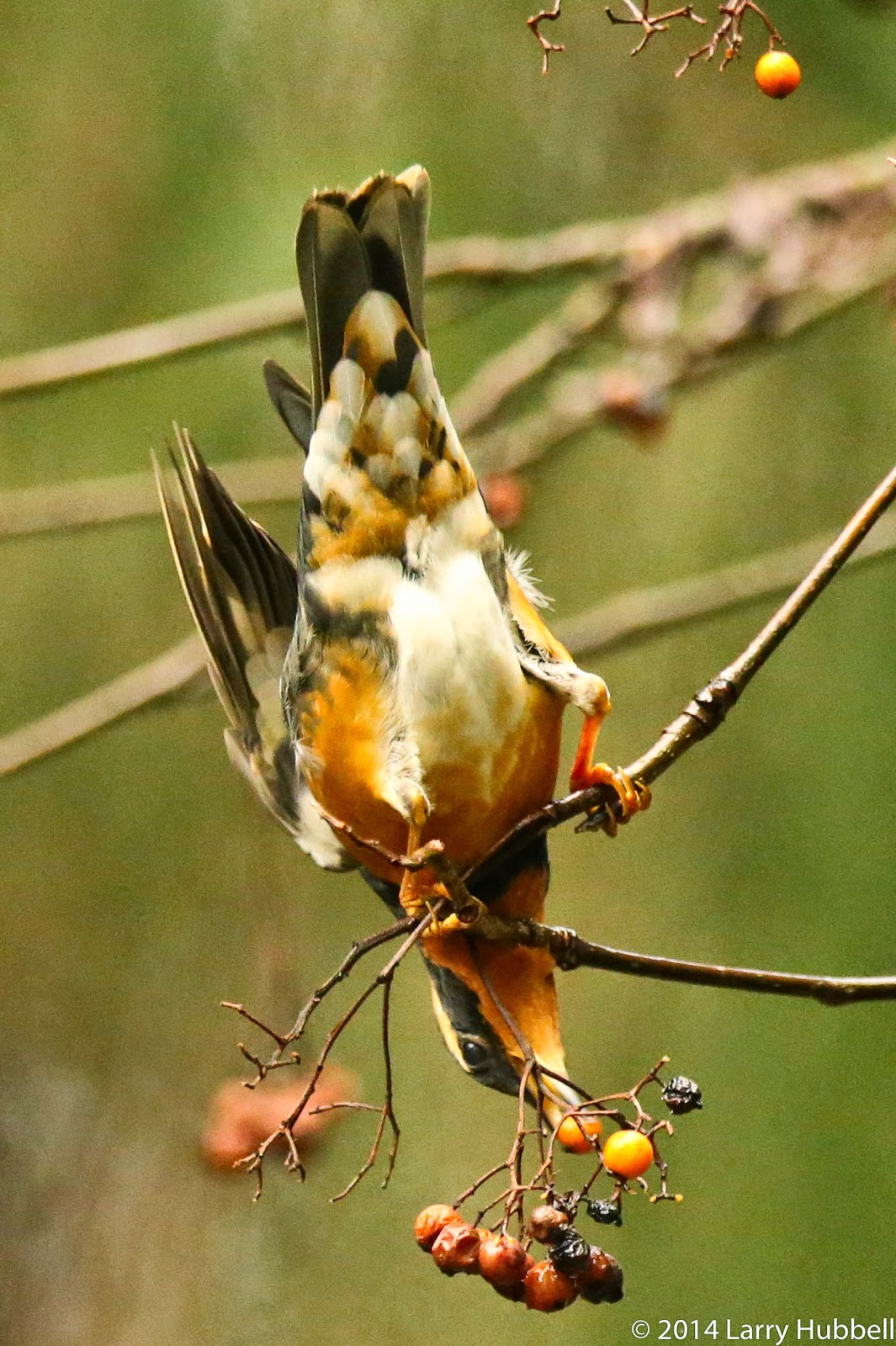 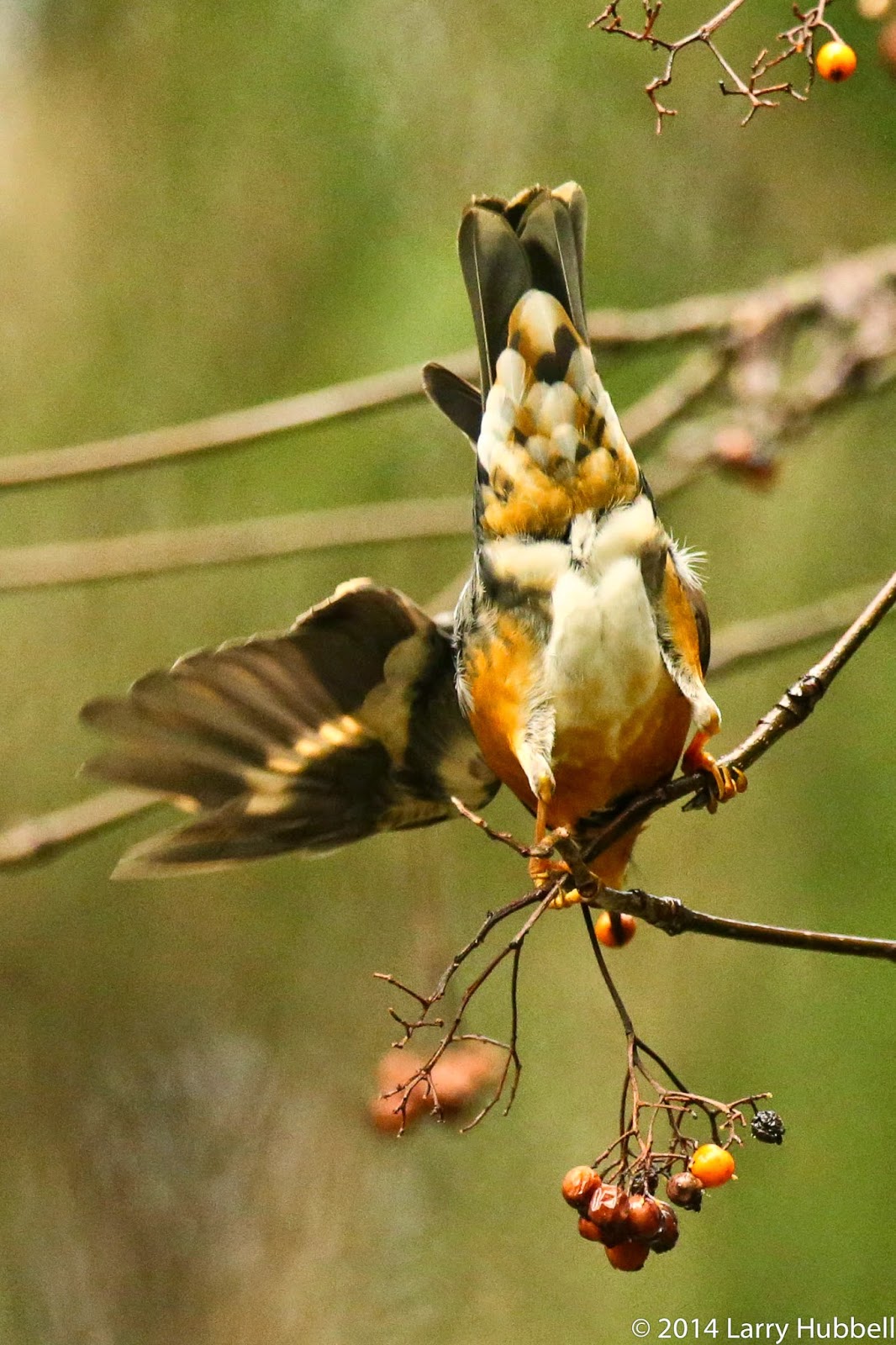 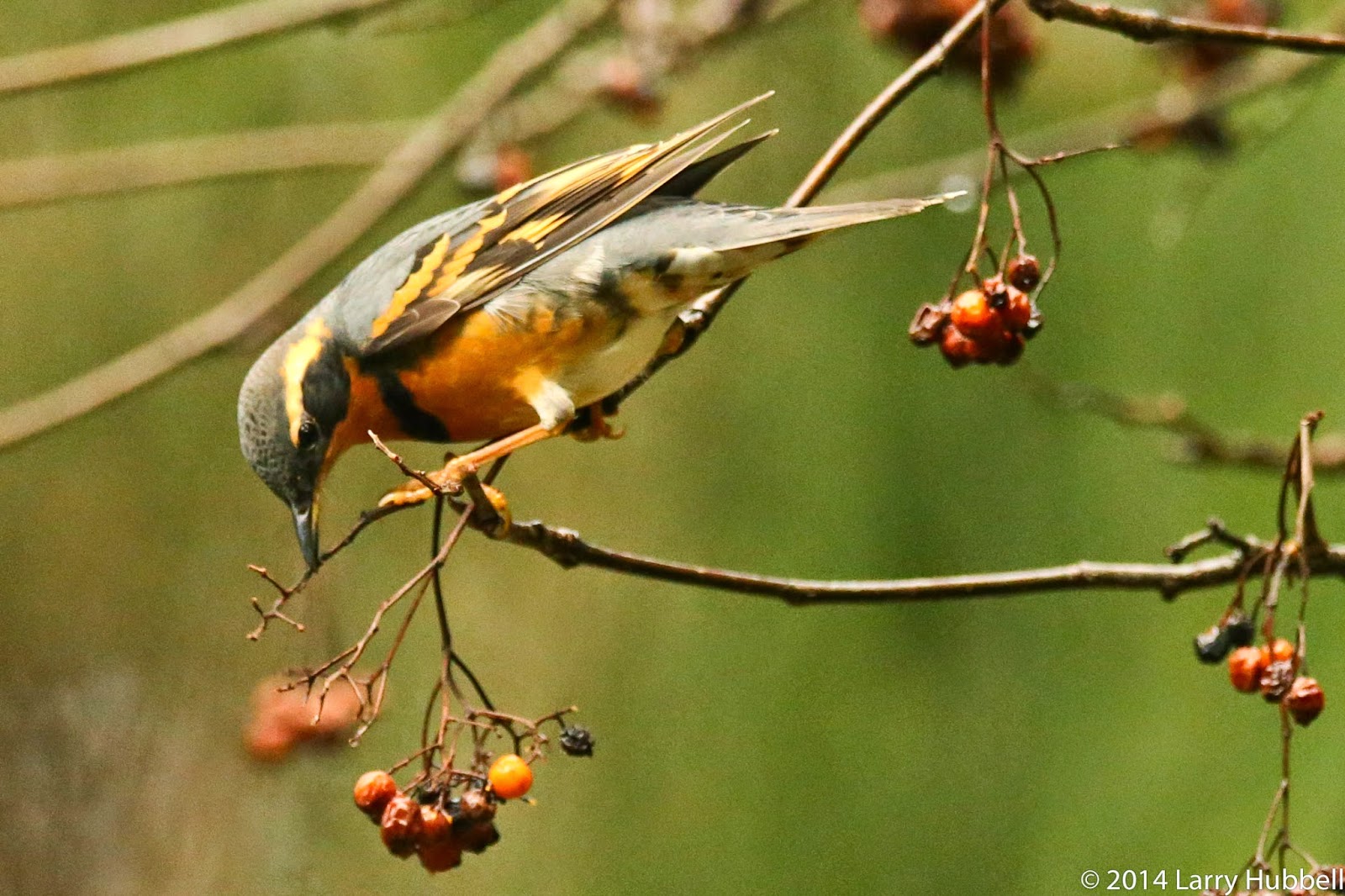 Sometimes a particular berry must seem to "call out" to be eaten. 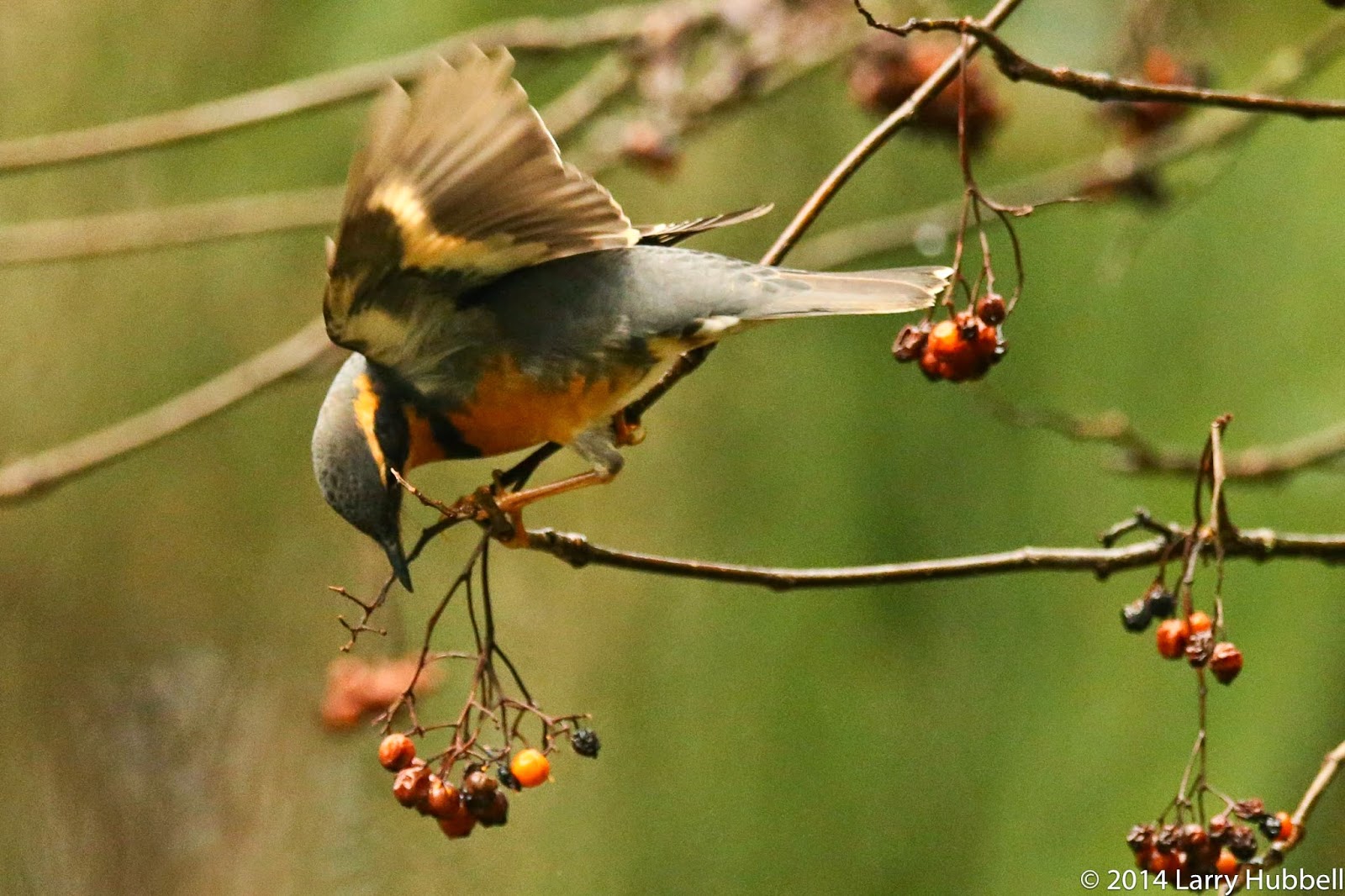 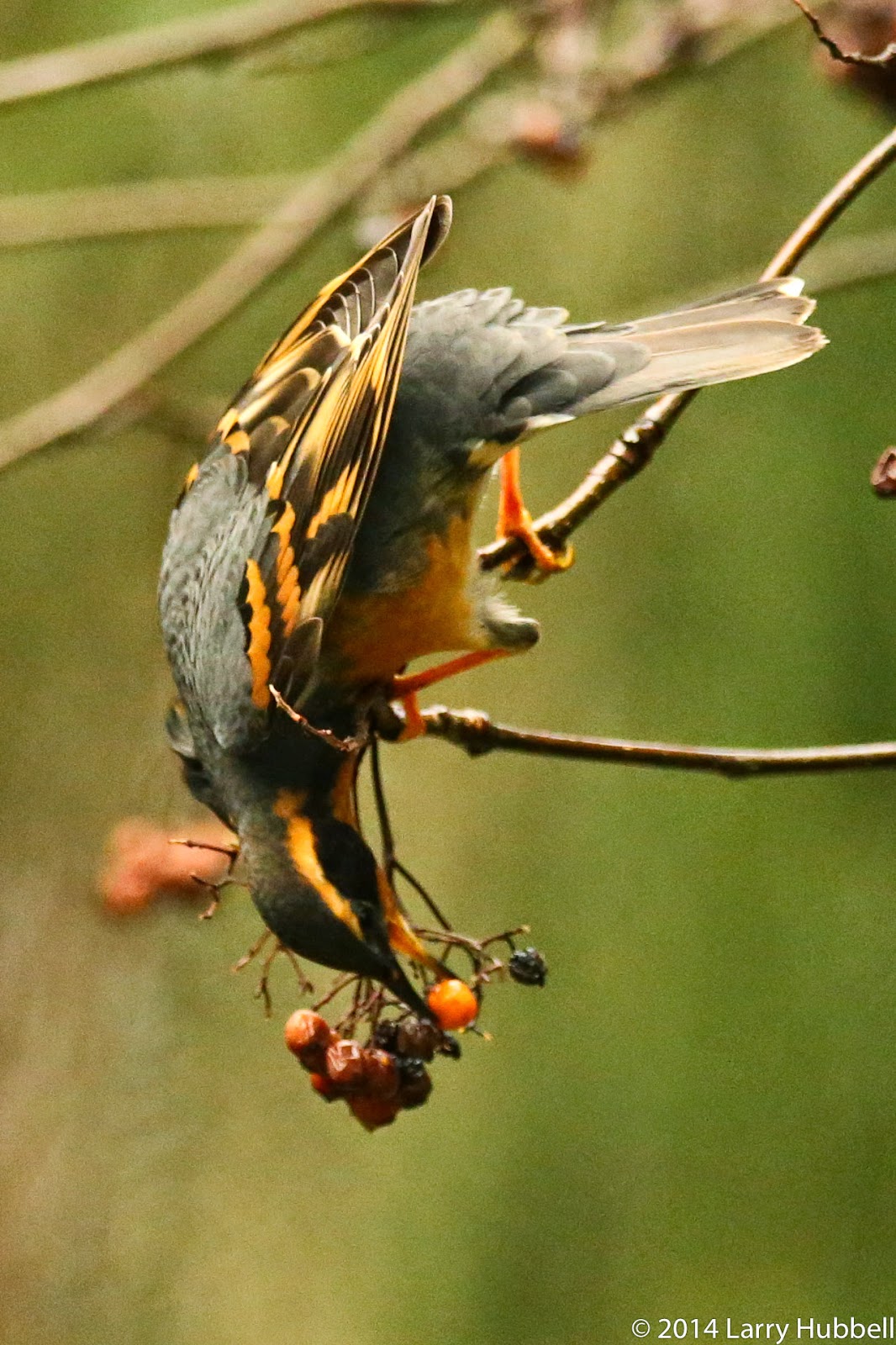 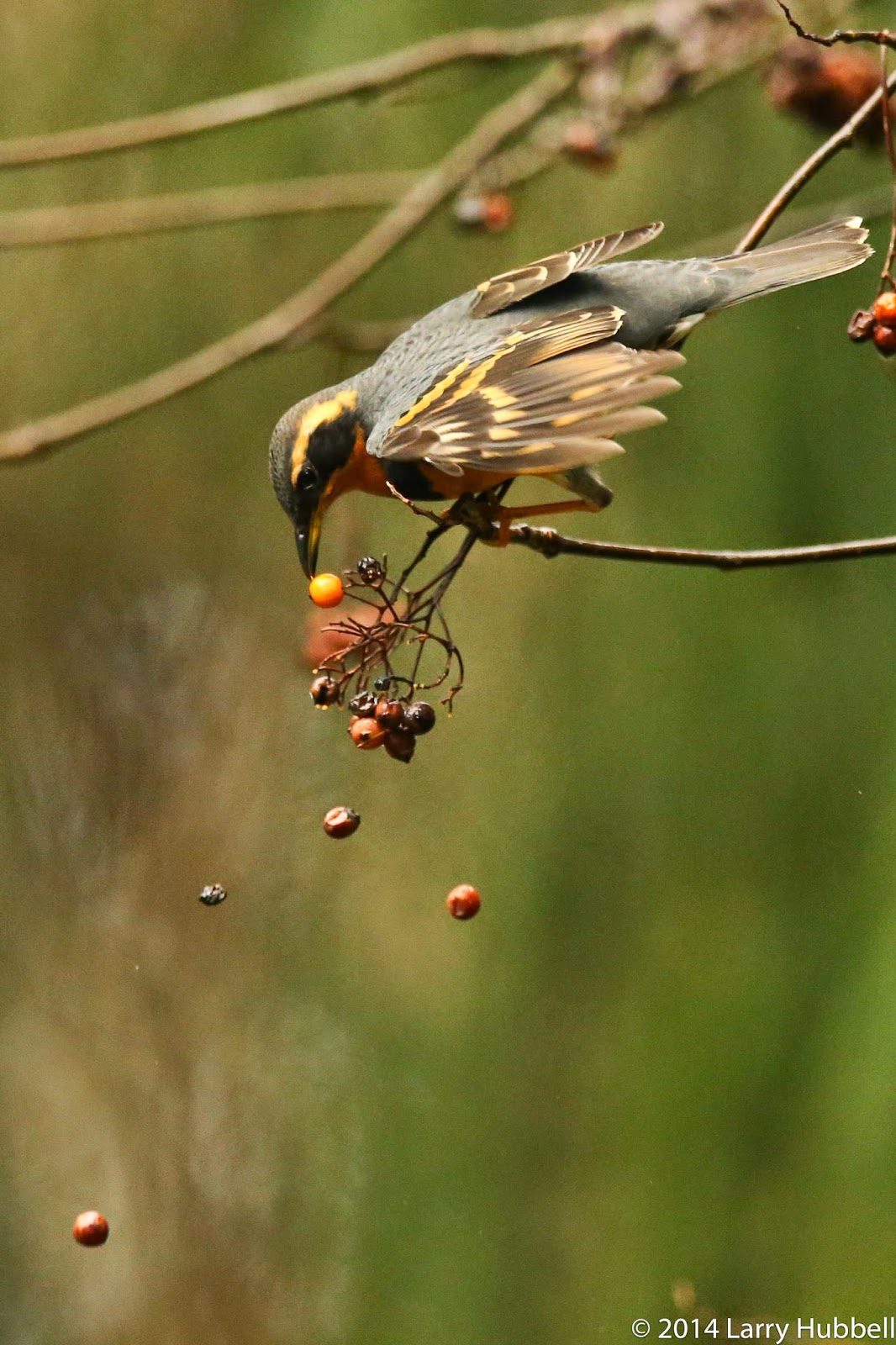 The thrush does not seem to mind losing the less appealing berries... 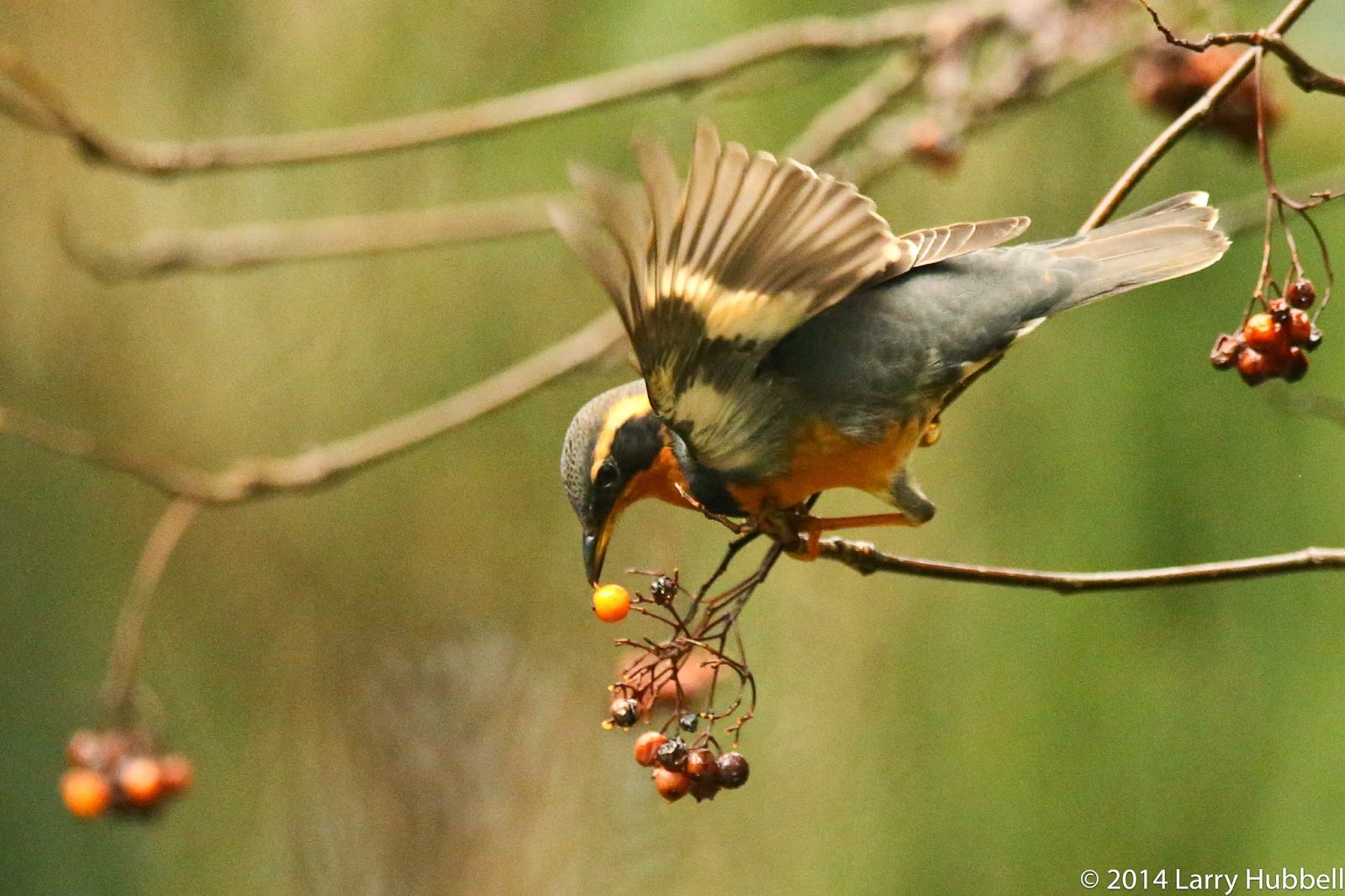 … as long as it gets the one that is "just right".

Cornell says, "Varied Thrushes are fairly common, but their populations declined by 2.2 percent between 1966 and 2010, resulting in a cumulative decline of 62 percent, according to the North American Breeding Bird Survey. " The implication is that retaining mature forested areas is critical for the long-term survival of varied thrush.

Yesterday even though berries were still hanging on the trees the thrush had moved into the more heavily forested portion of the Arboretum and were searching among the leaves for insects. Apparently they do not know that eating insects is supposed to be a summer feeding behavior. On the other hand maybe the bugs just have a very special flavor right know. 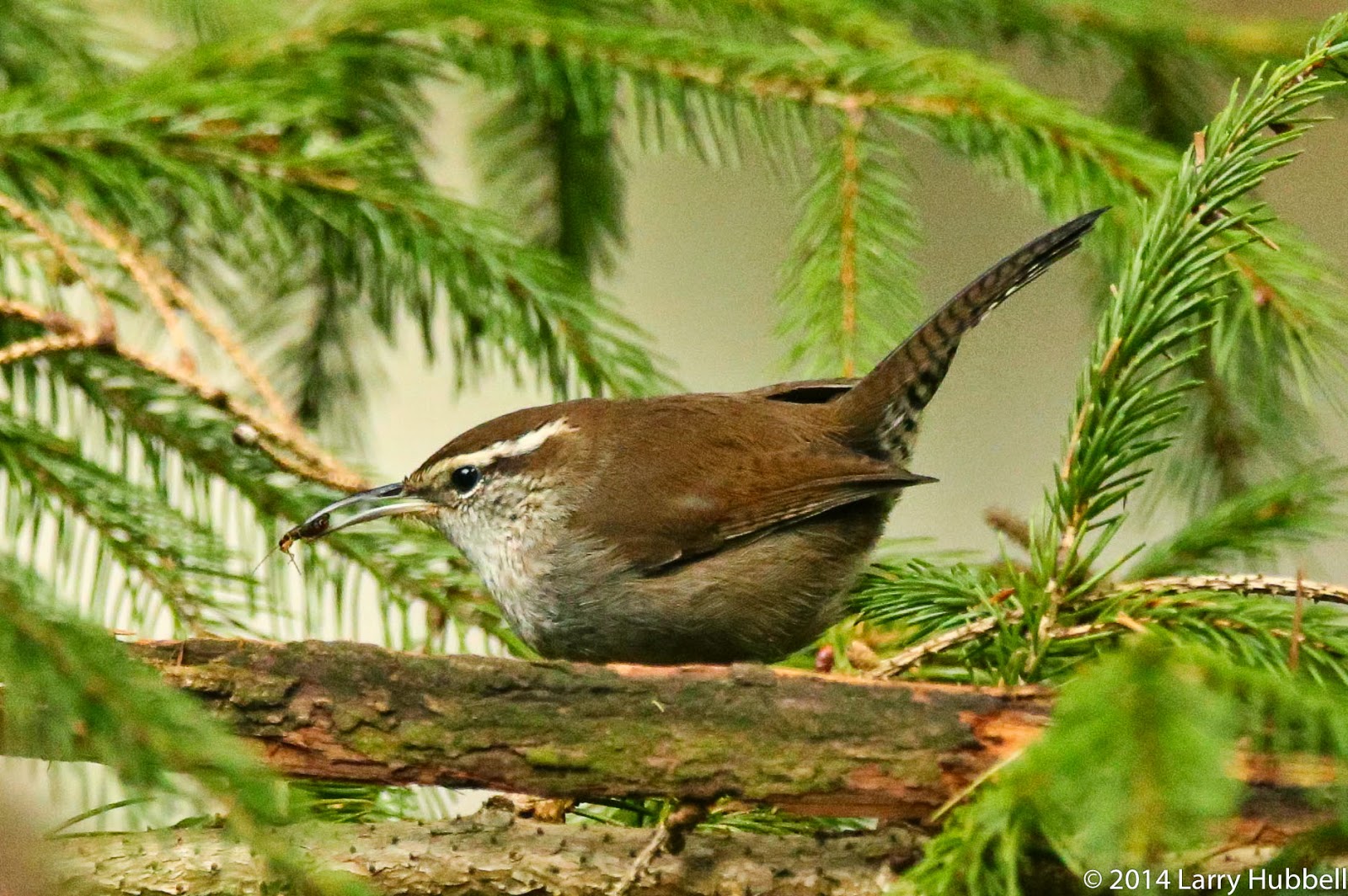 This Bewick's wren, spotted nearby, seems to agree... 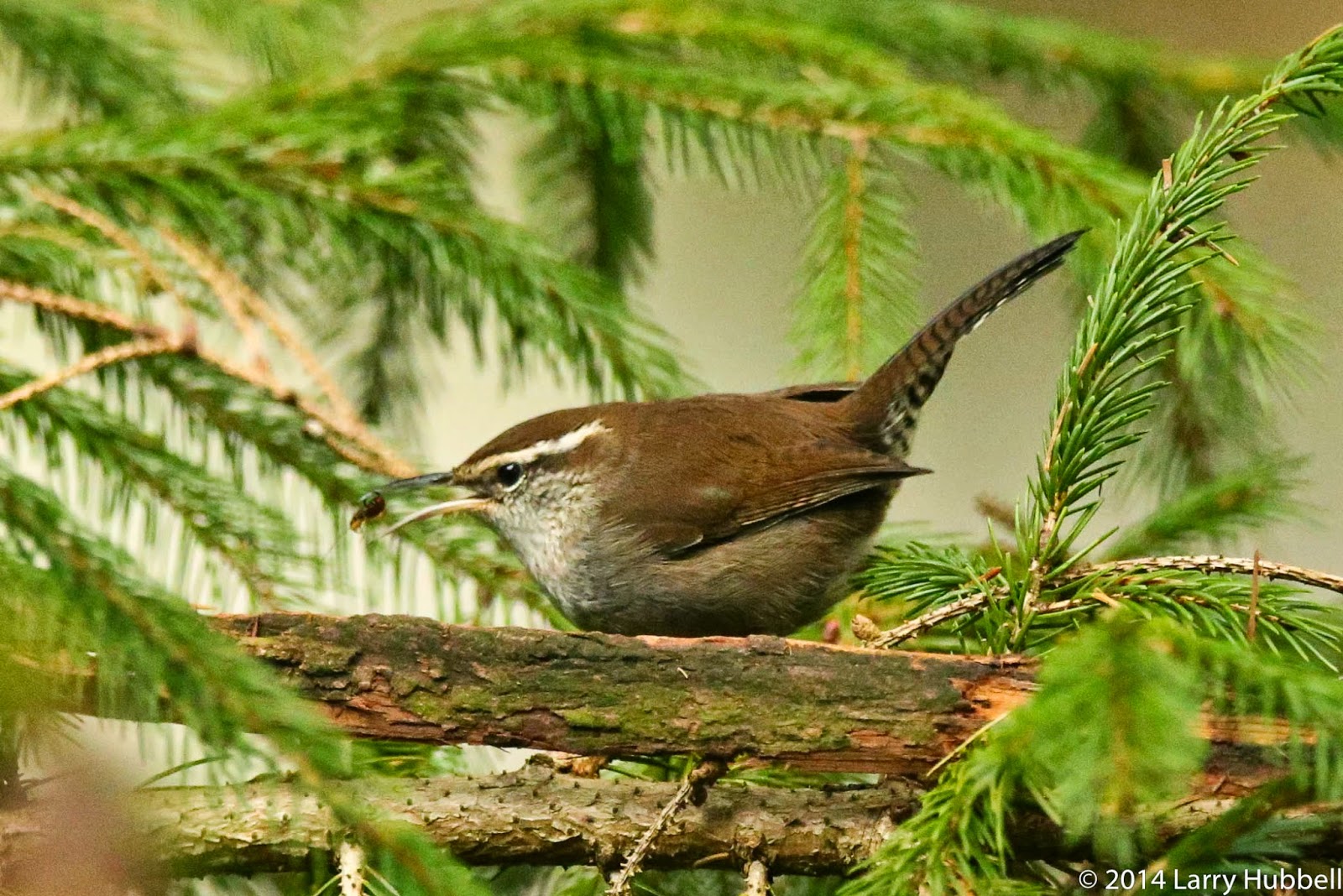 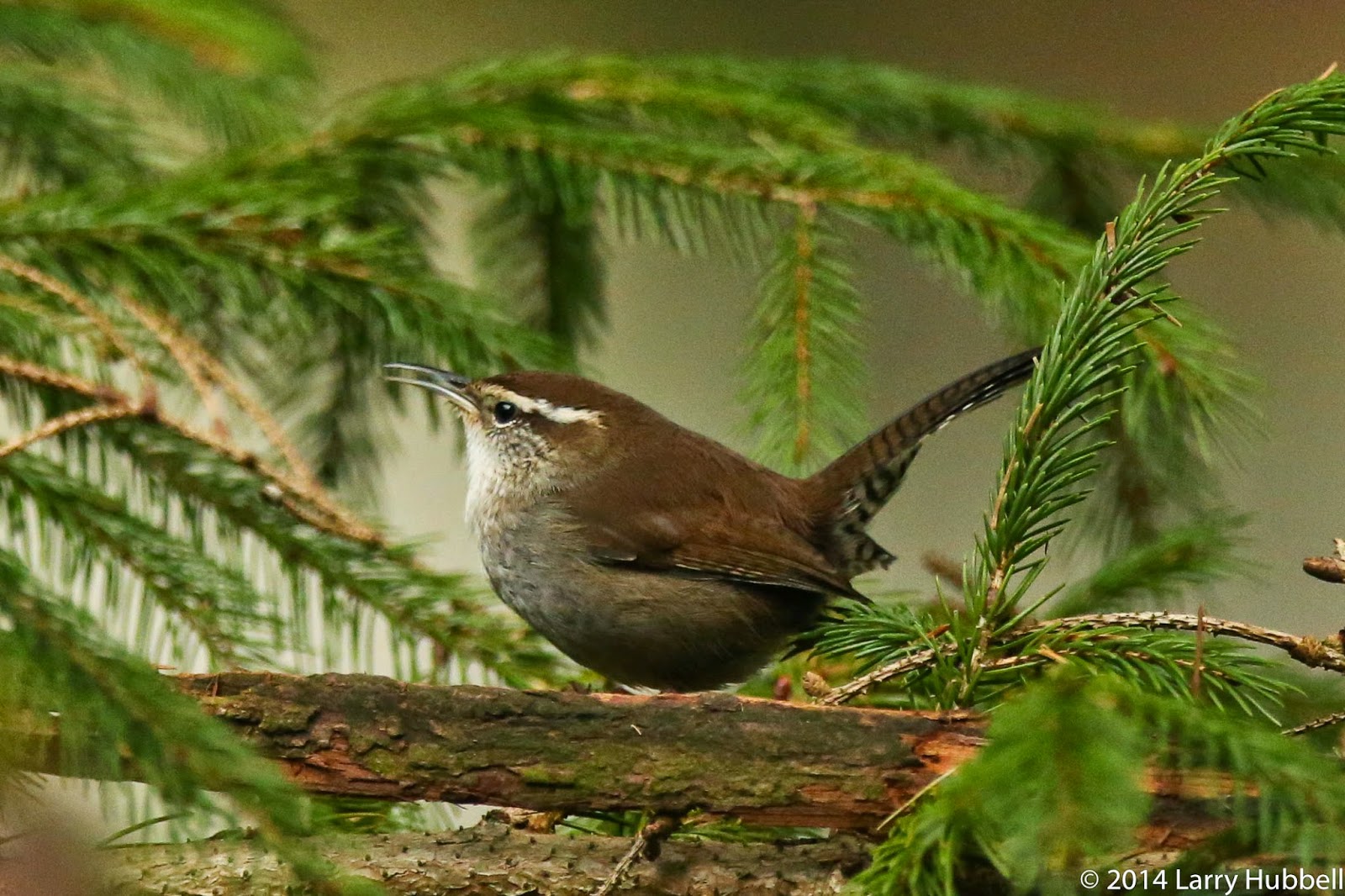 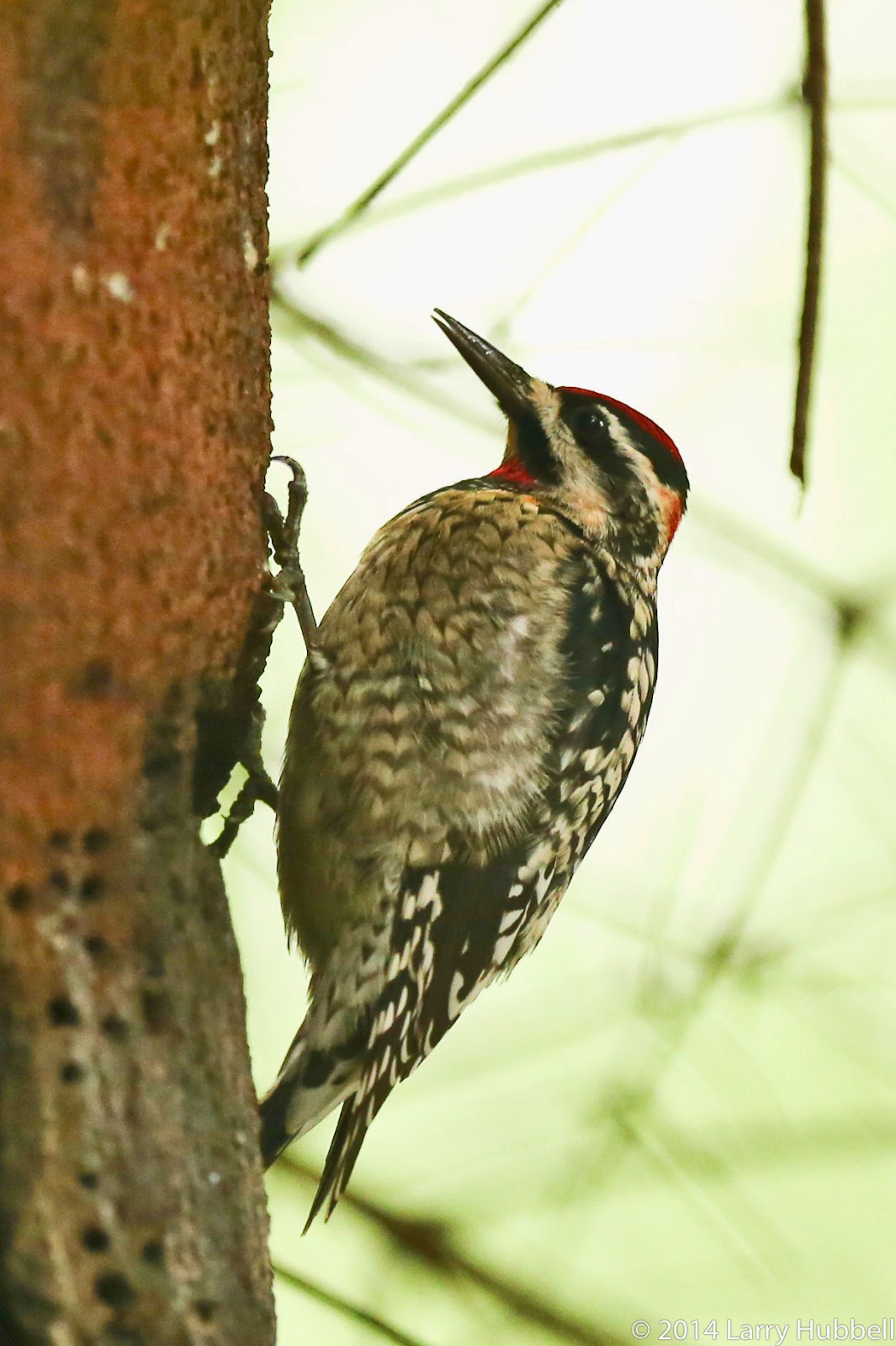 Yesterday, for the first time, I finally caught a glimpse of the red-naped sapsucker. Since it works in the shadows it is very hard to get a decent photo. In this case after just a few moments it flew. Surprisingly, it came directly towards me. (The sapsucker was avoiding a squirrel which bullied its way up for a taste of the sap.) The bird landed on a branch above my head and let loose a cascade of post-processed sap before disappearing from sight.