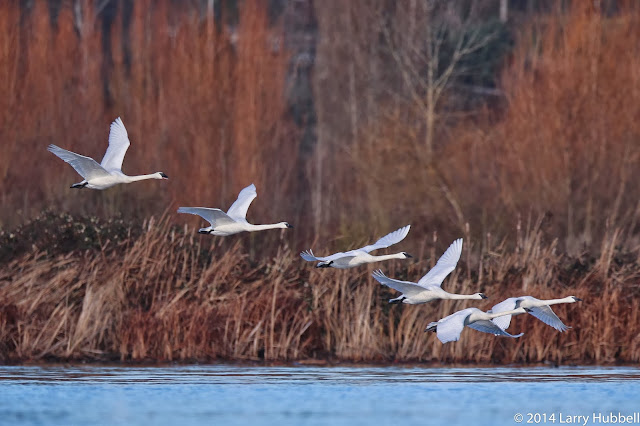 Trumpeter swans have been visiting our neighborhood. They come down from the north to enjoy the mild winter weather and our Union Bay buffet. 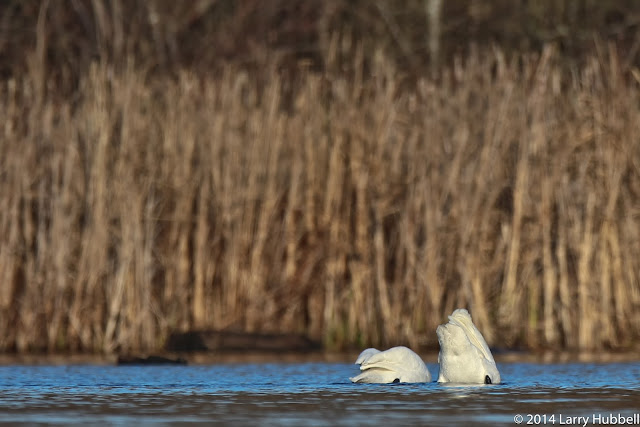 Underwater plants seem to be their favorite food. Being larger than all other waterfowl on the bay it is as if their food has been specially reserved. Kind of like a high shelf in the kitchen, only in the other direction.

Cornell says they generally mate for life and can live for up to 24 years in the wild. Which means the older visitors in these photos may have been born in the early nineties. Did you notice the brown discoloration on the forehead of bird on the left. This must come from digging around in the mud for that last little piece of plant material.

About a dozen swans arrived at 10am yesterday morning. They were honking loudly as they came in from the east and landed just north of the WAC (Waterfront Activities Center). It is funny that they made no attempt to hide their presence from the eagles that were watching from tree tops on the north side of the bay. Although they did fly in across the south side of the bay so maybe their approach to dealing with eagles is just to keep their distance.

They arrived in two groups and after landing in same area there was a lot of head bobbing and some wing flapping. It was just like old friends, unexpectedly running into each other on the street. It seemed to be their version of shaking hands, slapping one another on the back and exchanging hugs.

They calmed down quickly and got serious about searching for food. If there were tundra swans mixed in with this group it was not obvious as none of these birds seemed to have the yellow mark (a lore) on their bill just in front of the eye.  If you would like to see a photo of the lore check out this 2012 post, Click Here. (See photo number three.)

Cornell implies if they have the mark they are tundra swans but not having it does not mean they must be trumpeter swans. Maybe some of these birds are tundra swans in hiding. The tundra swans are also smaller and a bit more elegant but that can be hard to spot. There is one bird above (third from the left) that seems to have a consistent white spot (may be a reflection) on its beak but whatever it is it does not resemble a lore.

They sometimes stretch out in long lines as they follow each other around but they are certainly social and generally stay in groups. 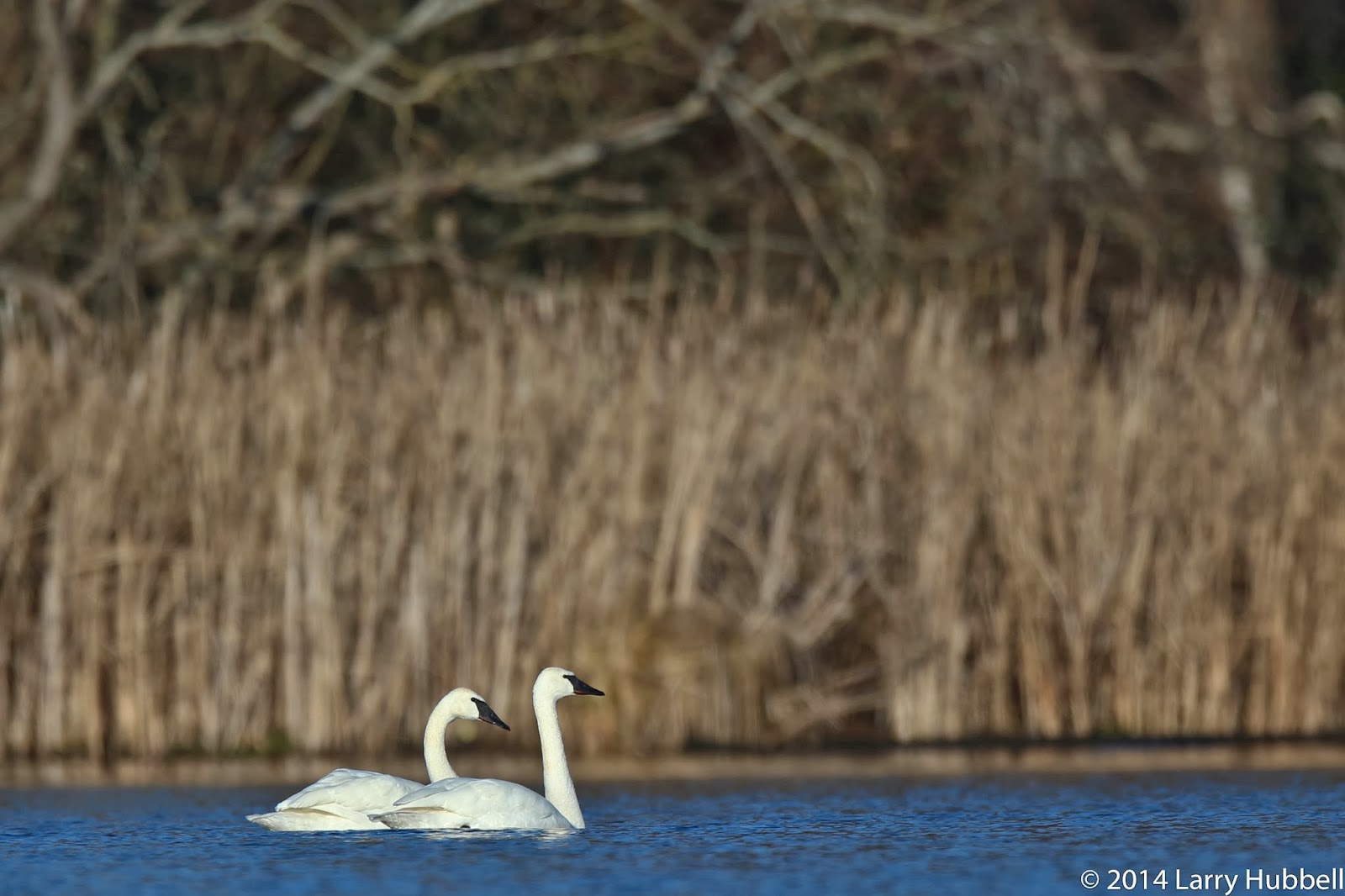 Occasionally a pair will attempt to lead the group in a particular direction. Sometimes the group follows and sometimes the pair has to turn around a follow the group.

It is not all peaceful and bliss as you can see, one bird reaches over and nips another bird on the wing. 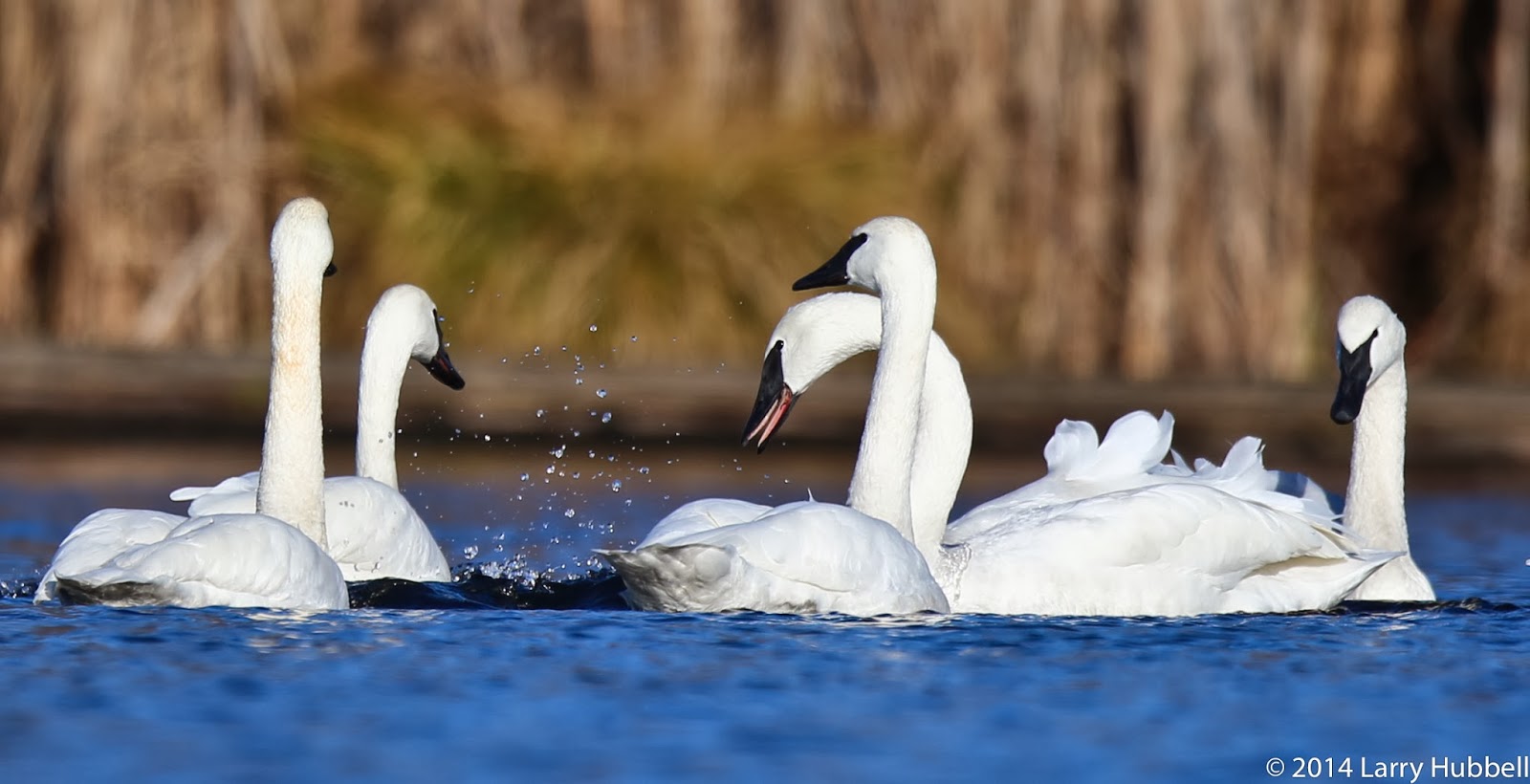 Maybe it was one male telling another you are too close to my mate, but after the nip n' splash things returned to normal.

There was one other surprise when a nearly mature bald eagle passed over. It came in low over the water and the coots bunched up and flew around in circles barely off the water. The swans casually congregated a little tighter but they were not nearly as agitated as the coots. I believe I have seen coot legs sticking up out the Broadmoor eagle's nest at feeding time so there is most likely good reason for their concern. 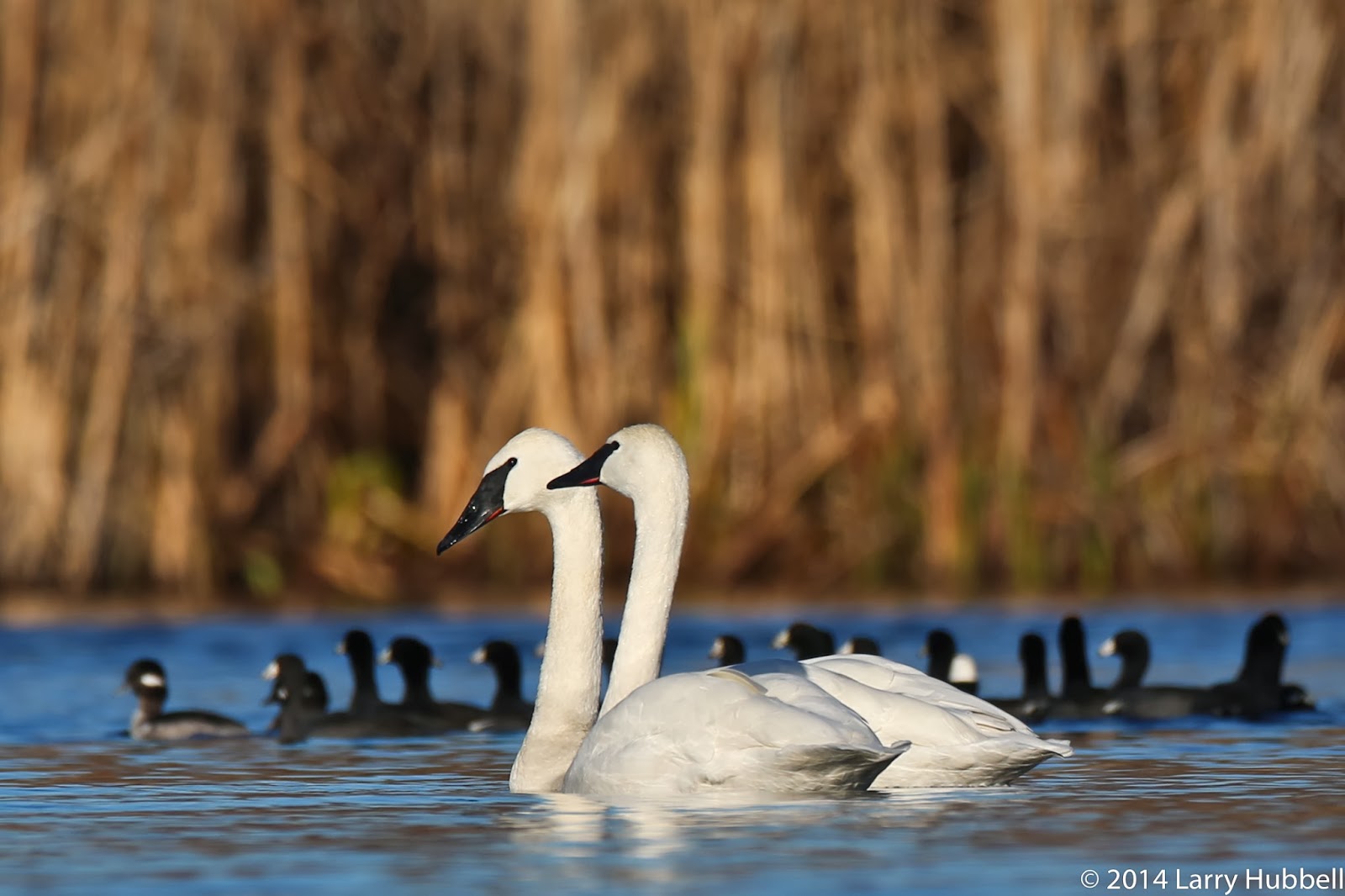 The only thing that made the swans actually take to the air was boaters passing too close for comfort. But on the whole the swans did not seem as skittish has they have been in previous years.

My guess is the swans spend the evenings and nights on the east side of Lake Washington. They seem to arrive on Union Bay mid-morning and stay in the sunlight along the western shores.

Their focus seems to be mostly on the Union Bay underwater buffet. If you get the chance you should check them out before they head north again. The best location seems to be from the Union Bay Natural Area. While you are there you might want to stop by the Miller Library and check out the photos on display.

Posted by Larry Hubbell at 3:01 PM