Harvey and The Band

Every day hundreds of commuters see cormorants sitting on a log or a buoy as they pass through Union Bay on 520. Cormorants are rather nondescript, dark birds that never seem to be doing anything spectacular. Their most distinctive behavior to the casual observer is the habit of spreading their wings to dry with the help of a breeze and occasionally even the help of some Seattle sun.

None the less, there was a bit of a mystery and a great deal of money and effort related to one of these birds. Just like on Sesame Street we can say, "One of these birds is not like the other." Do you notice a difference? 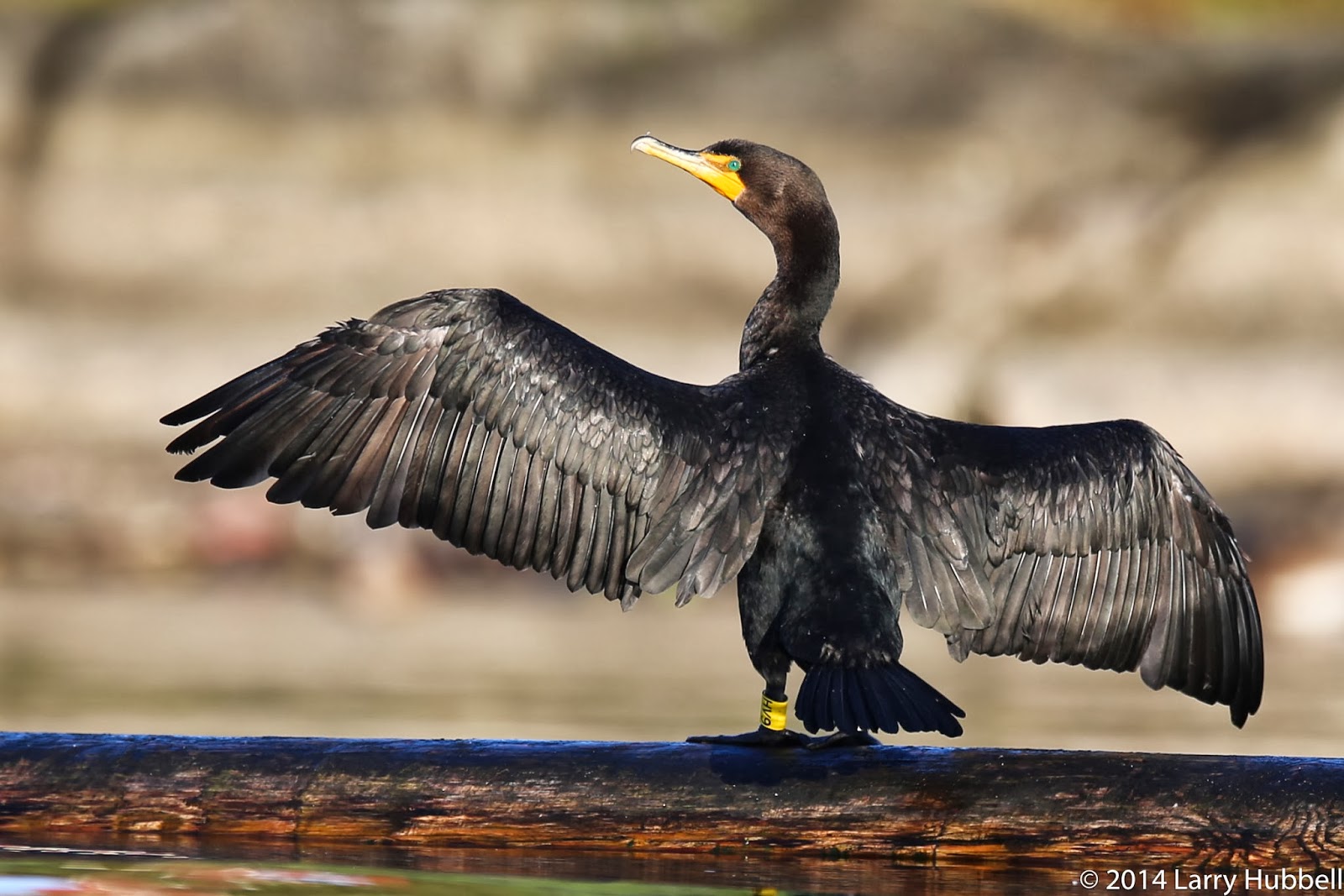 The bird with its wings spread has a yellow band on its left leg. 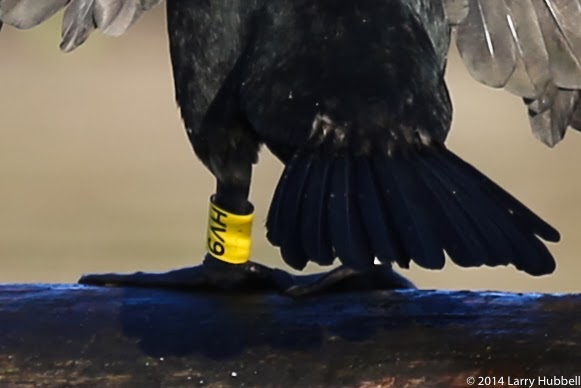 For 10 to 15 minutes Harvey dried his wings and then cleaned and aligned his feathers. 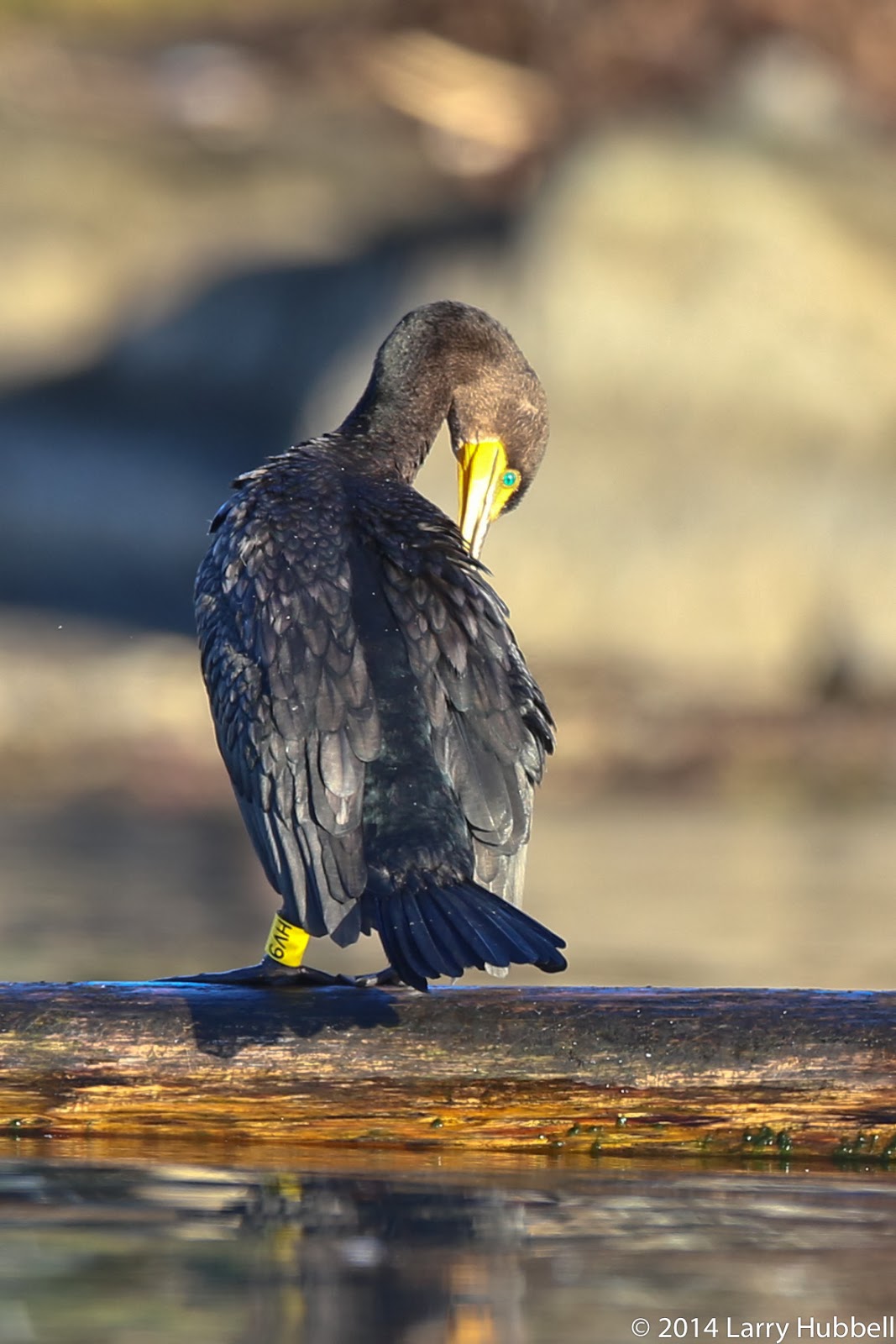 Actually gender is one of Harvey's mysteries, he or she could just as likely be Harvey-etta, however since Harvey is easier to write we'll stick with that. Still the bigger mystery was when, where and why did Harvey acquire his band. 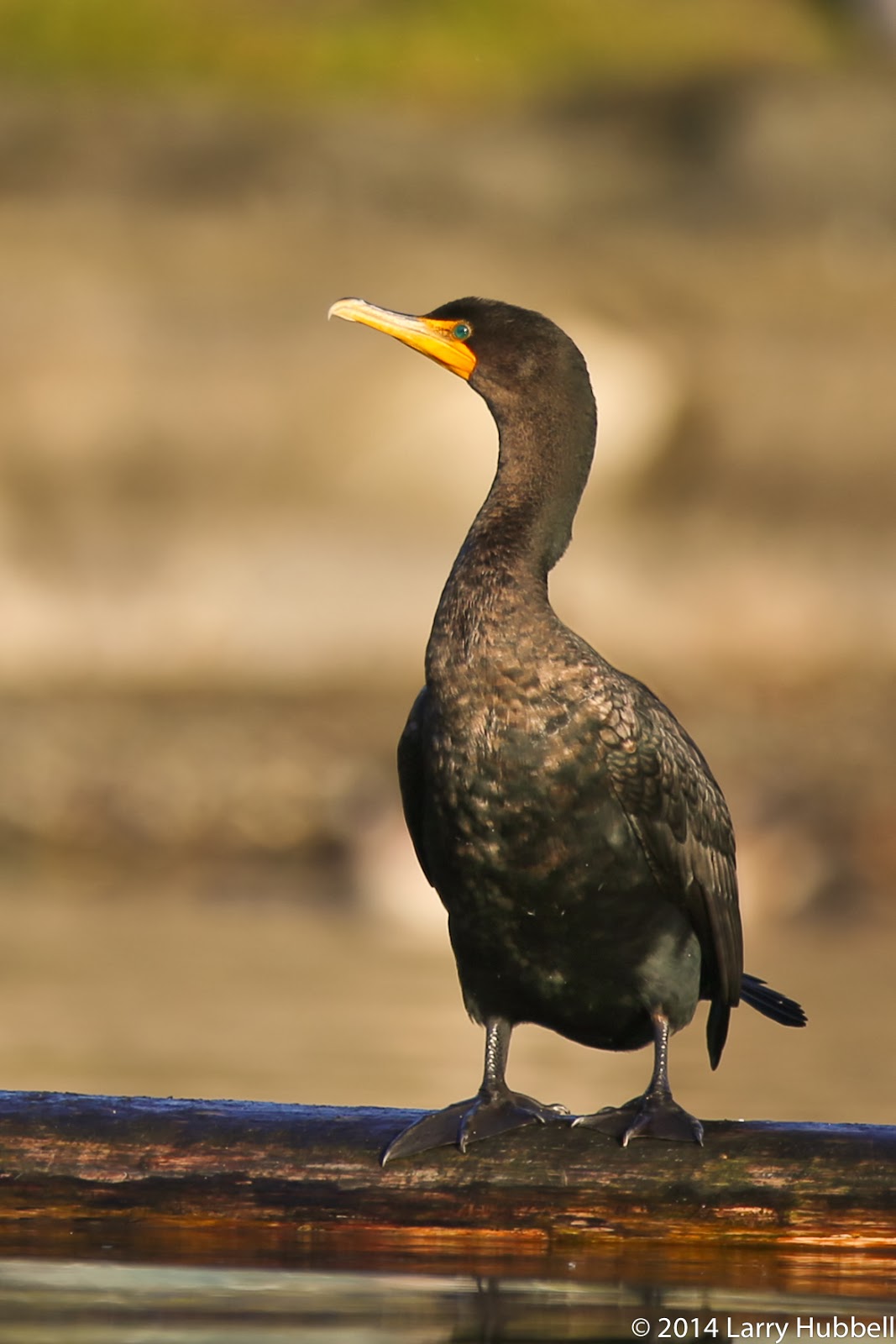 This photo of one of Harvey's associates shows the bird from stem to stern. In addition to  having hooked bills and clawed web-feet, It turns out that double-crested cormorants (DCC) have heavier bones than many other birds. Cornell also says the reason these birds preen is because they do not have much oil in their feathers, so they do not shed water like a duck. The theory is that extra water in their feathers may work a bit like a diver's weights to counteract buoyancy under water. All of these capabilities combine to make DCC very efficient underwater hunters.

It is not uncommon to see a DCC on Union Bay bring a fish to the surface and then have an eagle harass them until they give up the fish. In spite of this treatment the number of DCC on Union Bay seems fairly stable. Sitings of one to two dozen are not uncommon over the last five years and often there have been a lot more recorded on eBird. Maybe their superb fishing ability makes the eagle harassment just a minor cost of doing business on Union Bay.

The cormorant's superior fishing ability is also related to the band on Harvey's leg. After a little searching on the internet and a few emails this response explained when and where Harvey got his band.

Hi Larry,
Thank you for reporting a banded double-crested cormorant to Dan!
The bird was banded as a chick at East Sand Island in the Columbia River estuary (near Astoria, OR) in July 2013 as part of our study on demography (survival rate etc.) and movements (inter-colony during breeding season, post-breeding dispersal etc.) of the species. It is great to learn the cormorant fledged successfully from its natal colony and hanging out in your area.
Could you please let us know the date and location (Union Bay, WA?) you observed the cormorant when you get a chance?
Thank you again for your report, and we look forward to hearing details on your observation.
Yasuko
Yasuko Suzuki
Department of Fisheries and Wildlife
Oregon State University

East Sand Island is said to be the largest nesting site for DCC in the world. The growth of this DCC nesting site has happened in the last 30 to 40 years with continued acceleration in the last 20 years. This has created a difficult situation because the cormorants are feeding in part on juvenile salmonids. With declining salmon populations and federal protection, active management of the DCC is taking place in an attempt to protect the salmon. Bird Research Northwest has primary members like Oregon State University, the USGS and Real Time Research, Inc  but what is truly amazing is the extensive list of supporting organizations.

While this effort is highly commendable it does make one wonder if there are simpler, more effective ways to make changes to the upstream human behaviors that are the causing the greatest portion of the salmon decline.

On a happier note, I am wondering if anyone has seen DCC nesting near Union Bay. I have seen them flying around with cottonwood branches in their mouths near Montlake Cut but I haven't spotted a nest. Cornell says they will nest in trees as well as on the ground and given there is limited safe ground-level nesting sites on Union Bay, the trees are probably their best bet.

The next time you are out and about on Union Bay take a second look at the DCCs. You might see one building a nest next spring. (This nesting schedule from East Sand Island has the DCCs hatching out at just about the same time as our Union Bay eaglets. Nature is amazing.) You might also get to see Harvey and The Band. Their finest music piece so far is entitled, The Rhythm of Nature. :-)

PS: Thank you to everyone who came to the Opening Reception of the Birds Watching Art Show. I heard some of you were unable to get copies of the particular photos you wanted due to the demand. The inventory was restocked on Monday so you now have another opportunity.

This sculpture, which is in the first cabinet just inside the doors at the show, symbolizes concern for the salmon but also for concern for our children and the challenges of living in world with limited diversity. 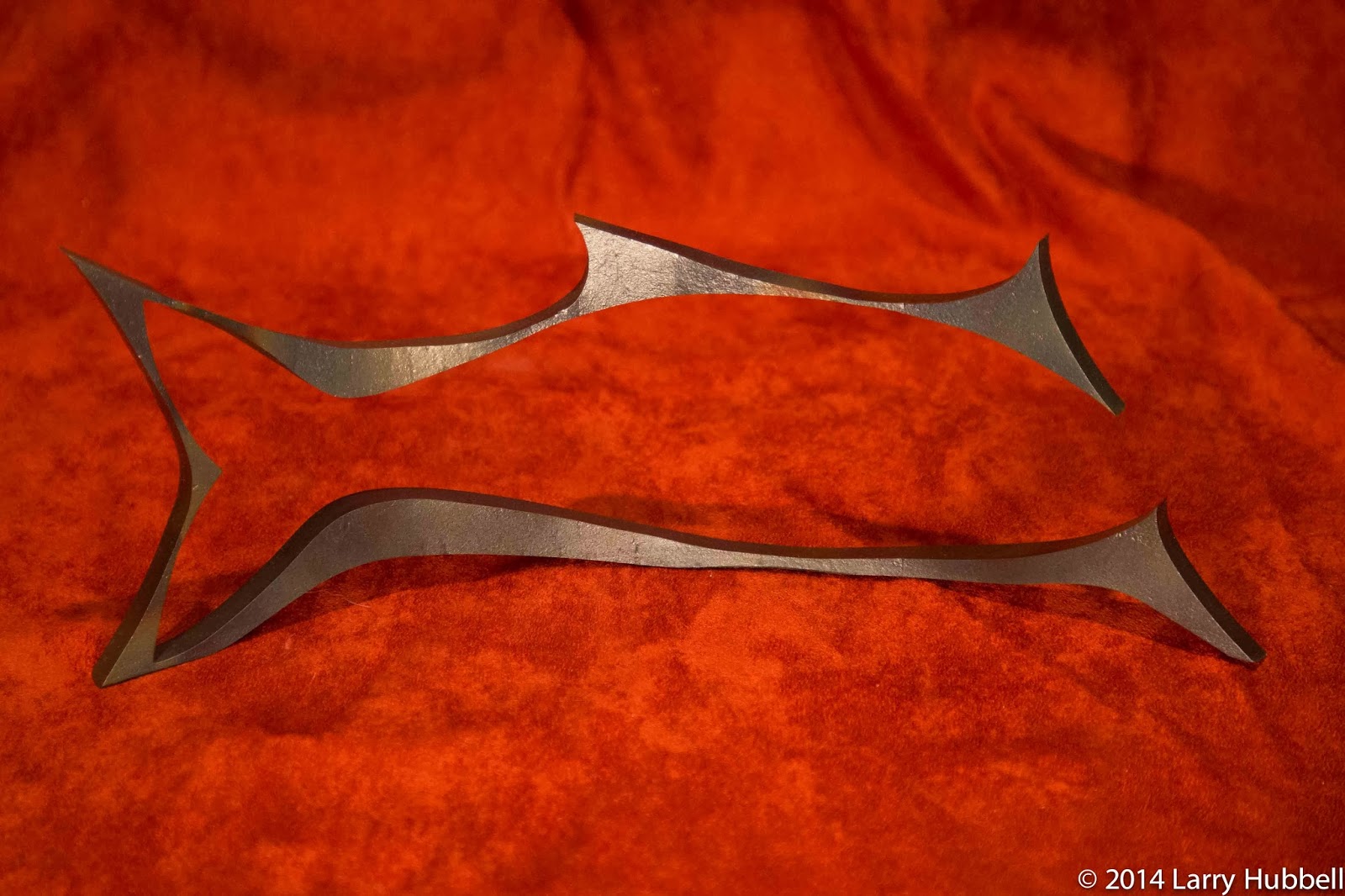