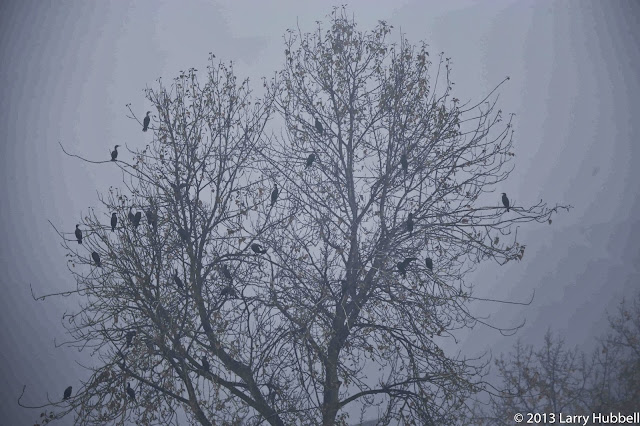 On Monday, not too long after dawn, cormorants were on standby near the Waterfront Activities Center, waiting for the power of the sun to penetrate the fog. 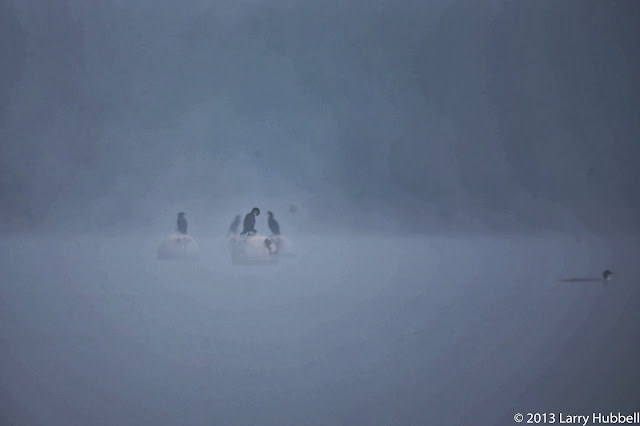 A few birds did venture down to wait, on the "Apple-Cup" buoys, hoping for enough light to begin hunting for breakfast. 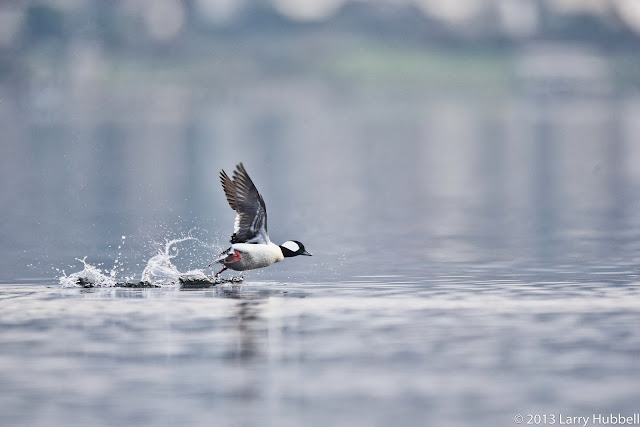 Nearby a bufflehead water-walked its way to flight and safety. 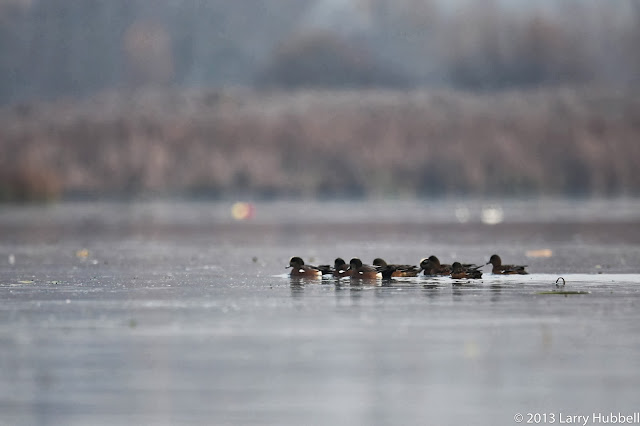 Wigeons huddled together as the weight of the fog on the water seemed to make waves nearly impossible. 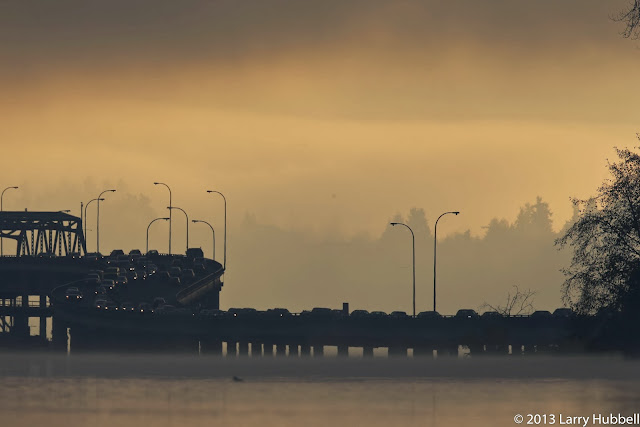 Commuters were also on standby as they waited for President Obama and his entourage to reach the airport. 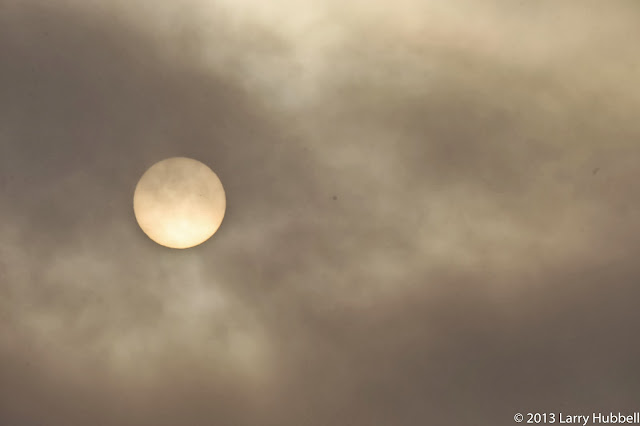 The sun, looking more like the moon, seemed mystified by the baffling clouds. The swans and the bittern that were sighted on Sunday were no where to be seen and the lack of sunlight was not exactly a photographer's dream. I paddled on feeling almost like the only human in the world. 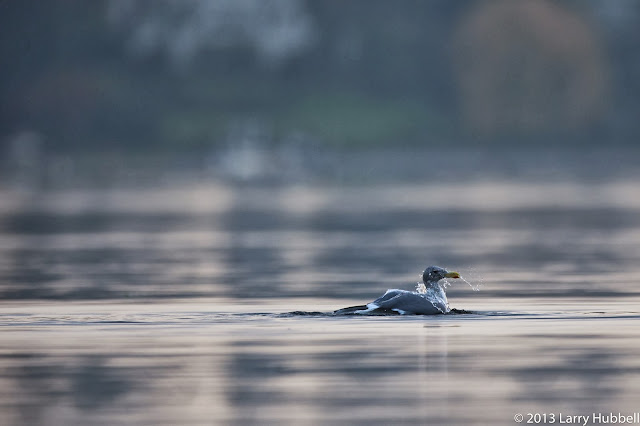 While a gull bathed nearby the quiet of nature bathed me in peace. 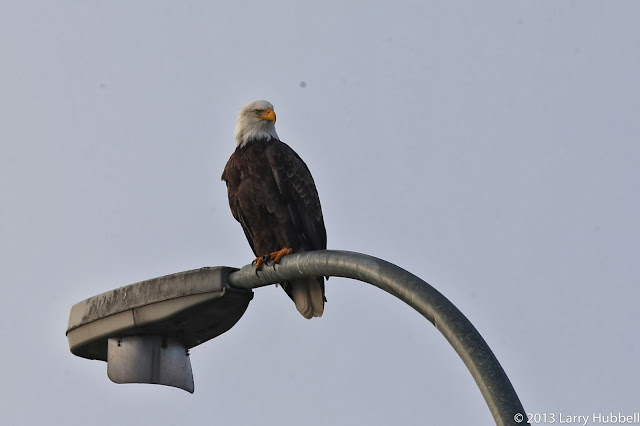 Eva tried to survey her domain no doubt frustrated that the fog was inhibiting her search for breakfast. 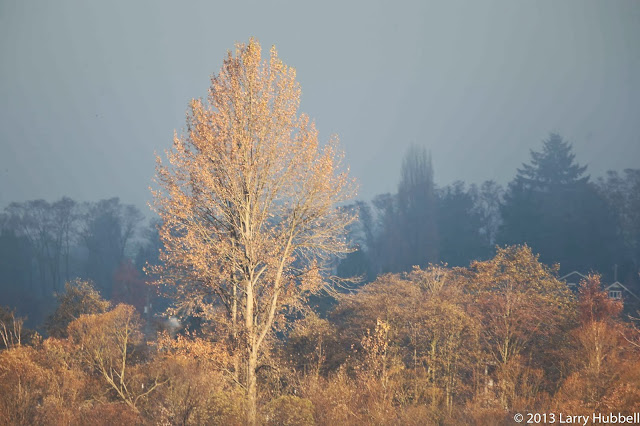 ... a cottonwood at the Union Bay Natural Area and most likely some wigeons as well.

Faster than the camera could focus Eva headed north across the bay. She made a single pass across the surface of the water before turning south. It took her less effort and time to pickup breakfast than it would take for you to go get an egg McMuffin. 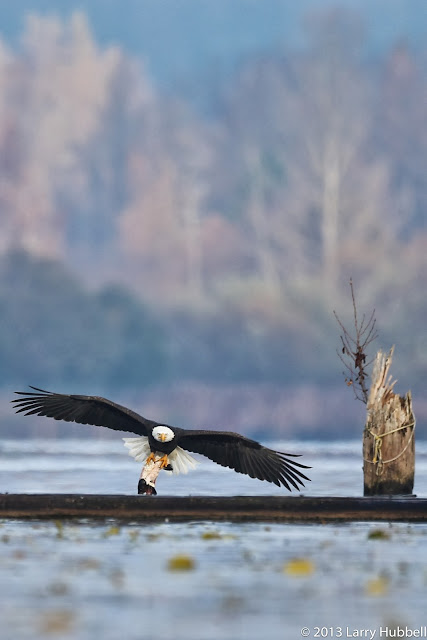 Eva landing on the log boom, where cormorants often dry their wings, with what looks to have been a wigeon. 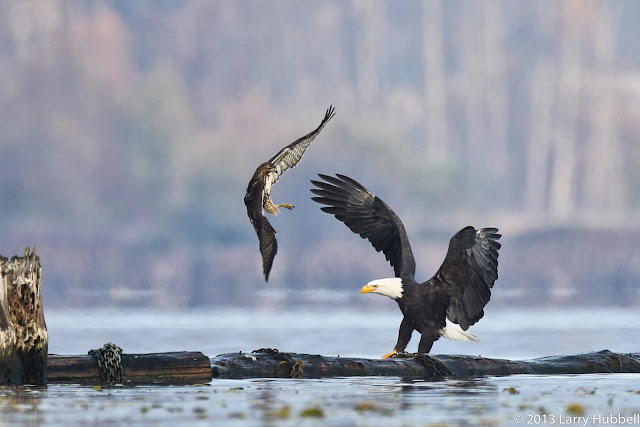 Before she can take a bite a pirate, possibly The Pirate from Kingfisher Cove, attempts to scare her away from her food. Eva flaps her wings once and the hawk decides to look for an easier meal. It makes one wonder, What the hawk was thinking? Possibly the hawk has a habit of scaring the cormorants, that often use this log, away from their fish. Apparently that concept does not scale up to large female eagles.

While Eva eats Albert nonchalantly waits near by. It would seem the pecking order on Union Bay is clear. Eva being fifty percent heavier than Albert is at the top. 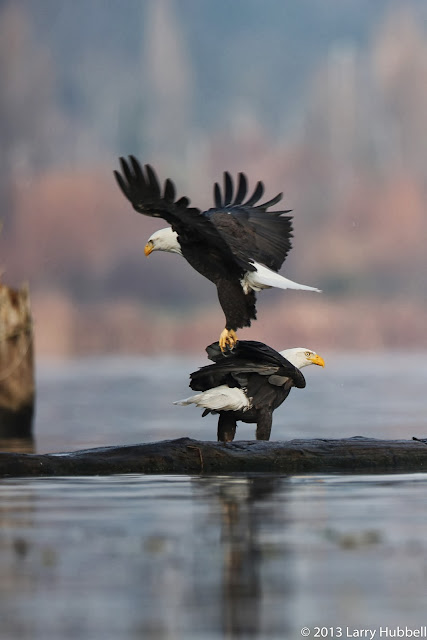 However in less than 10 minutes Eva was full enough to allow Albert a turn. 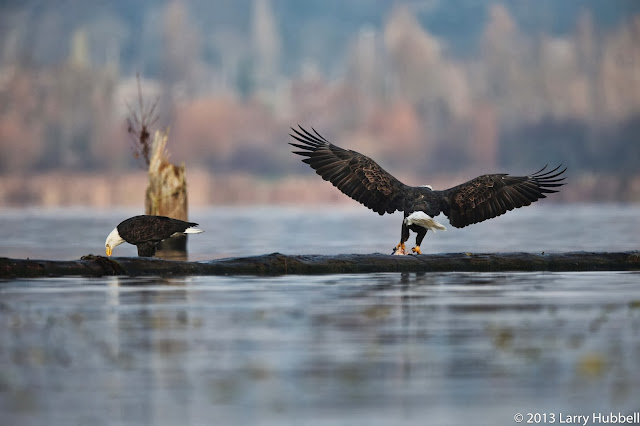 Still power has its prerogatives and Eva takes along a choice morsel for desert. 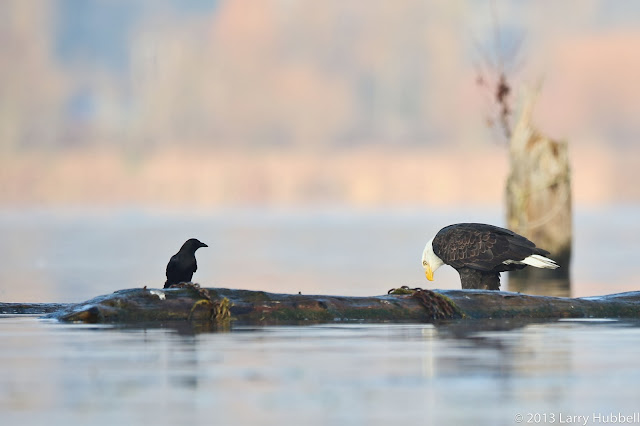 A few minutes later a crow shows up. Being smarter than the hawk the crow simply gets in line to wait its turn. 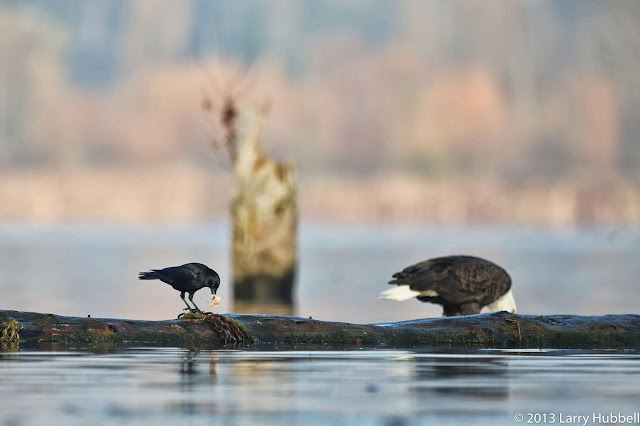 As Albert moves away to inspect what else Eva has left behind the crow is rewarded for its patience. 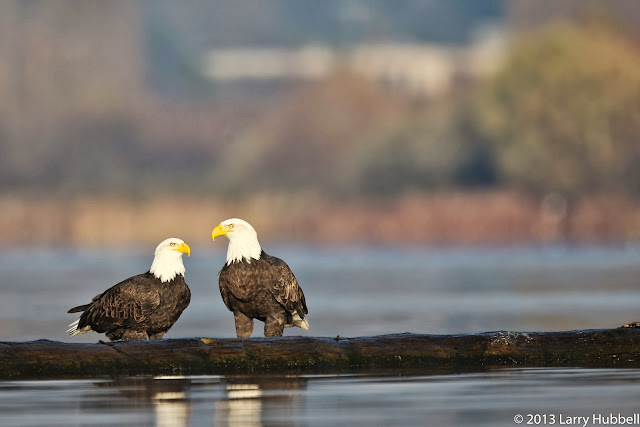 Albert and Eva appear appropriately thankful after their meal. Clearly the Union Bay power pyramid starts with Eva, then Albert, the Pirate, the cormorants, the crows and some where near the bottom are the wigeons and the fish.

Have a great day of Union Bay....where nature lives in the city!

PS: By the way in January the UW Botanical Gardens (by the Union Bay Natural Area) will be hosting my first solo art show at the Miller Library. There will be photos, paintings and a few sculptures. There will also be additional, unpublished eagle photos from this kayak trip as well.