Baby on Board - The Things A Mother Will Do

It is surprising that such a nondescript bird can create such cute little, zebra-striped young. 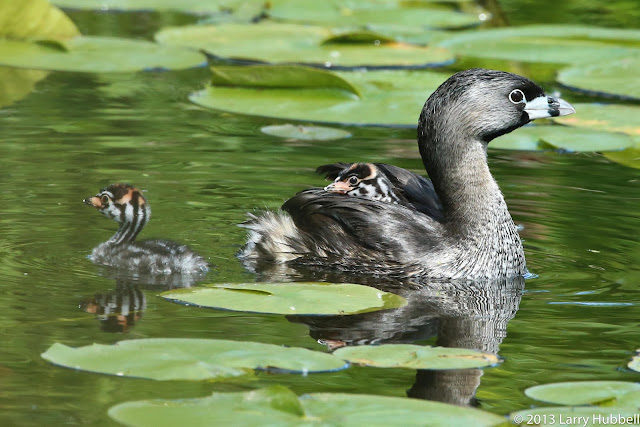 Still when one stops to take a look at this relatively common bird the list of surprising characteristics and behaviors seems to just keep on coming. Not only will she carry one of her young on her back, if they feel the need, she will carry two. 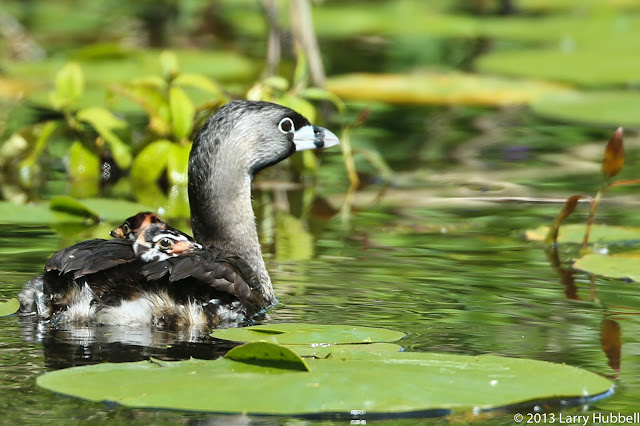 Of course this behavior can't last forever. The young in the previous photos are only be a few days old and were still small. The photos above were taken one week ago and by yesterday the young birds had grown so much that fitting just one under the wings on the mother's back would be a challenge. 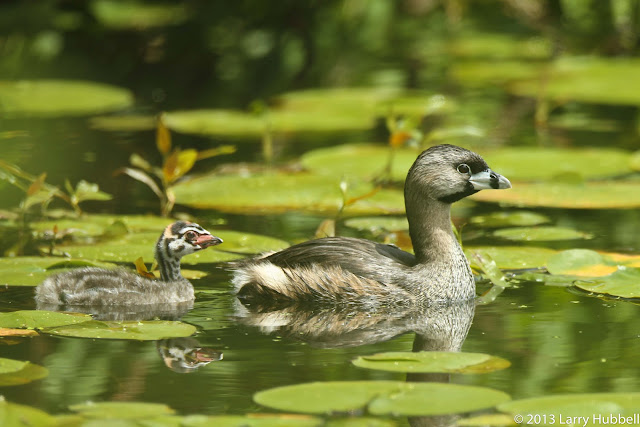 Thank you to David Boyle for your directions.

While this bird is a water bird, technically it is not a duck. For one thing it does not have webbed feet. It does however have lobes on its toes. Just like a duck's webbing or the flat part of a paddle this increases the amount of water the bird can push against in order to propel itself.

Another curious feature of this bird is the fact that its legs are attached at the "tail-end" of its body. This enables strong and agile propulsion underwater. While this is great for underwater hunting it makes walking on land a challenge. As a result this bird's usual reaction to danger is to go with its strength and dive.

Given that this bird is normally in the water it can be difficult to actually get a photo that shows how the legs are attached to the body. Luckily, earlier this month at a nearby nest I was able to watch a female as it laid an egg. After laying the egg the female remained completely motionless for a couple of moments before hopping off the nest and resuming her normal activities. Those legs are clearly designed for water propulsion. 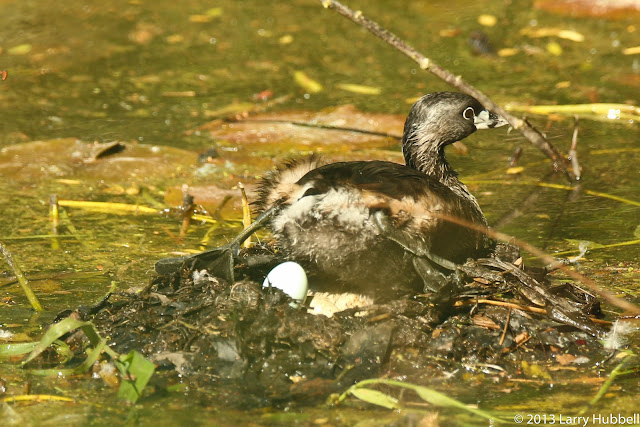 Although it is not obvious in the photo the freshly laid egg had a faint, light blue color. The older eggs, which had been in the nest for awhile, had been discolored by the leaves and mud which the parents use to cover the eggs. This makes them a little less, bright, shiny and attractive to hungry predators.

Normally a parent is on the nest and if they leave the nest to hunt they cover it. However a few days earlier I happened to find the nest unattended and uncovered. 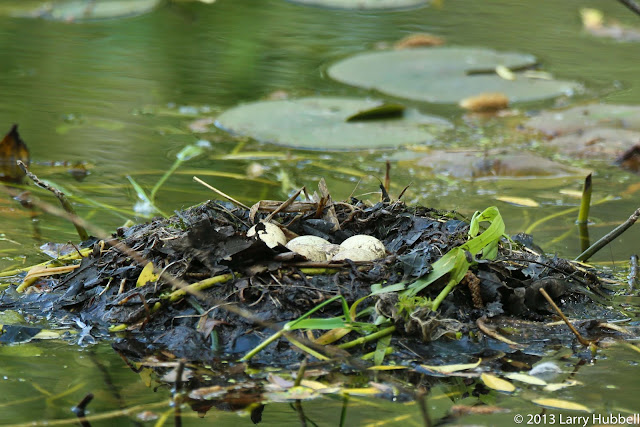 Within a few moments one of the parents returned. It seemed like this was the first parent to leave the nest and it was expecting to find the other parent on the nest or at least to find the nest covered. It was almost as though the bird counted the eggs in the nest before quickly covering them. 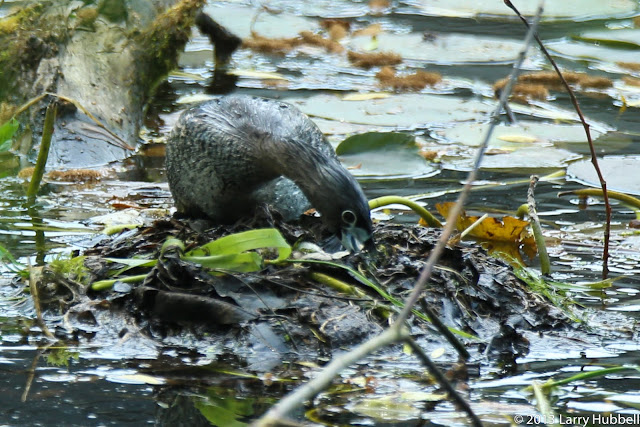 Over the last few weeks the grass has grown up in the area around this nest and made it much more difficult to see. This is a wonderful thing as it provides additional protection for the eggs and the young birds while they learn to dive, hide and hunt. However it did make the following photos, taken yesterday, a bit more obscure. 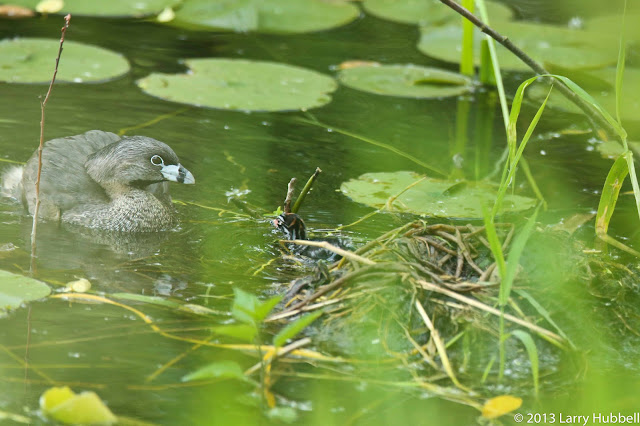 Given this bird's skill below the surface, it is not surprising that underwater is where it usually hunts. Most other Union Bay birds, that catch prey under water, bring their food to the surface before they consume it. This bird apparently swallows its food while it is still underwater.

(Though I have spent a fair amount of time watching these birds I have never seen one eating. If you have been lucky enough to photograph one doing so, and would like to share the photo, send it in to be published here. My email is: ldhubbell at comcast dot net)

Yesterday, Stephanie sent in this excellent photo of a Pied-Billed Grebe preparing to eat a fish, above water. It looks like I need to do some additional research on the eating habits of the PBG. Here is her email: 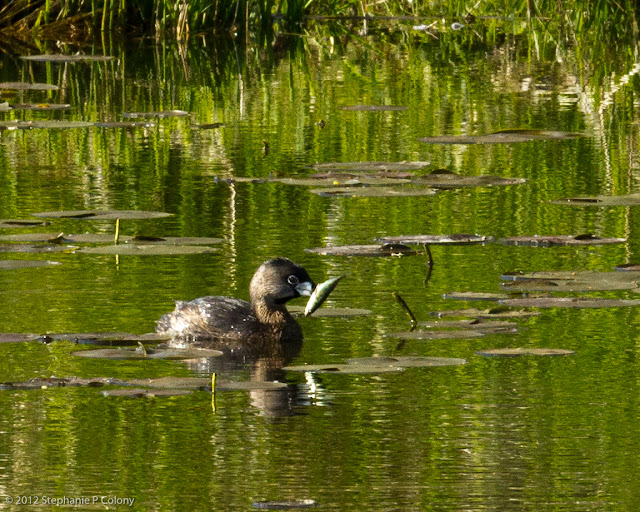 Further research indicates it is the Bufflehead and NOT the PBG that I have never seen or photographed eating above the water. Please forgive this error in my memory.

Thank you Stephanie for participating in my education and recall.

Another unique feature of this bird is the sound of its call. It sounds like some eerie, prehistoric call that could come from a dinosaur or some other unknown creature. You can hear the sound online at the Cornel Lab of Ornithology (Click Here) or you could venture out to Union Bay. Taking a walk or canoe ride on Union Bay is not only a healthy option but in addition you may get to hear a PBG live. Plus for the next few days (at no additional cost), if you are lucky, you may get to see a mother bird carrying her young on her back. The things a mother will do for her children are amazing.

Just in case you are unable to get out and about here are a few more photos. 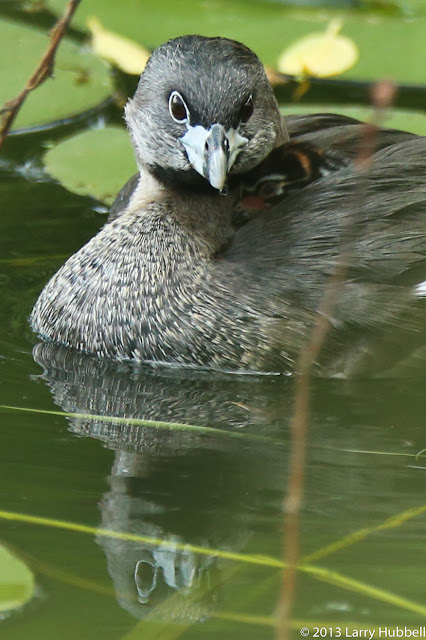 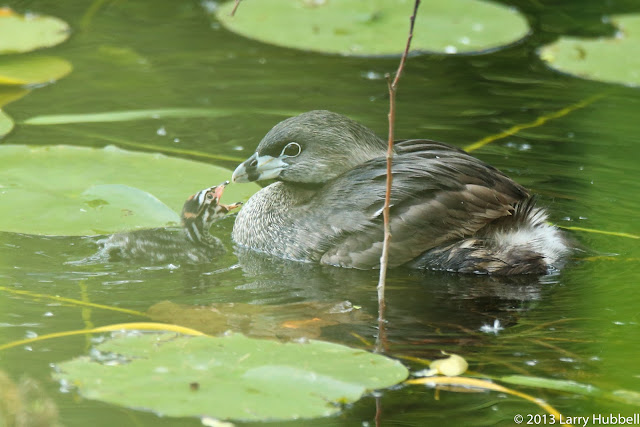 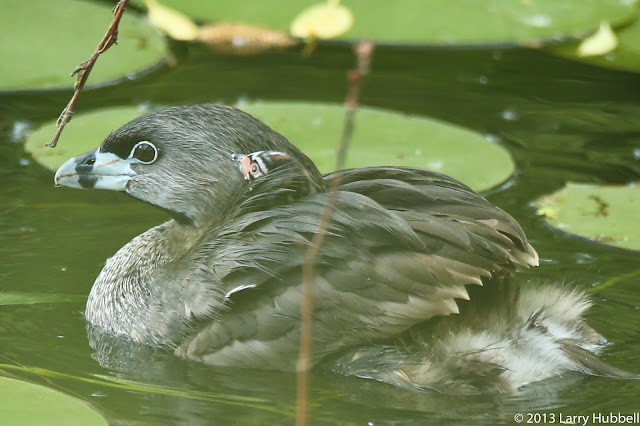 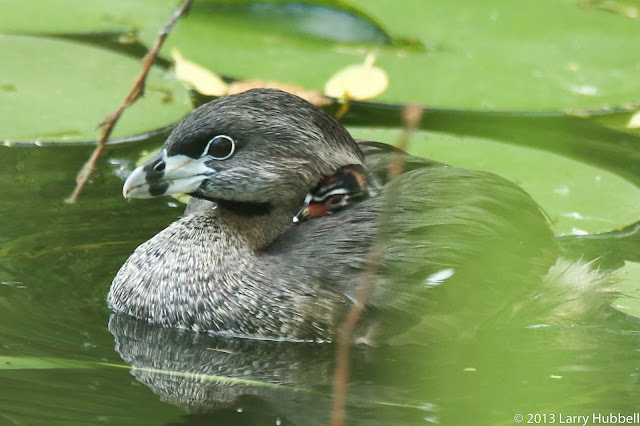 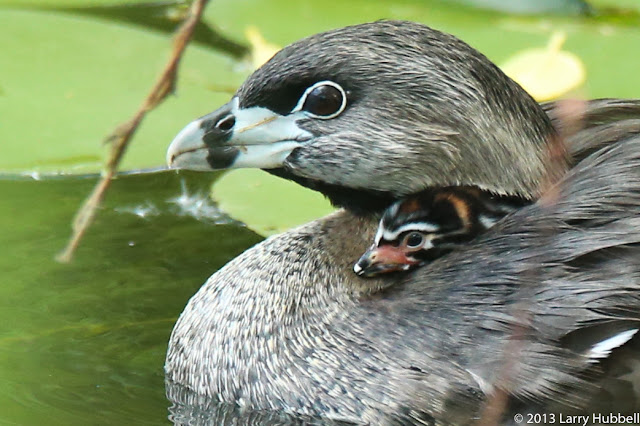 Have a great day on Union Bay, where nature lives in the city.

The Broadmoor eaglet appears to be doing fine, more photos to follow.

By the way if you are out early, near the southeast side of Foster Island, you may catch a view of the female Wood Duck and her ducklings. 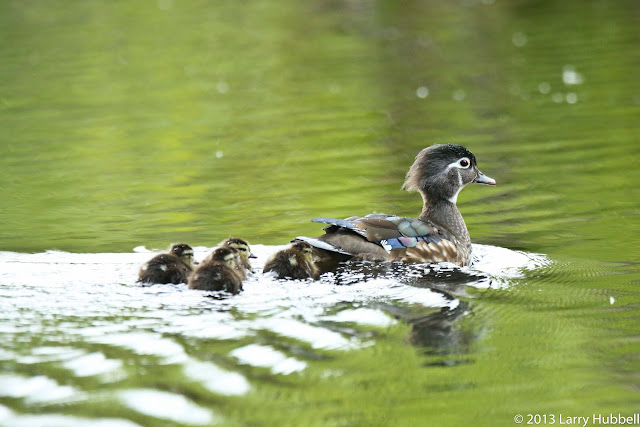 Most likely this is the same bird that nested in the box just across the water. If you didn't see it before you can see more in the post, Young Love. Don't miss the house hunting video to watch the mother bird defending her nest.

Also if you have enjoyed the Cornell Labs bird sounds and information as much as I have you may want to help them expand their coverage from 150 birds to 700. If you follow this link making a donation is easy and painless. Donate here