The Snowy Owl, a very calm, beautiful and serene bird. 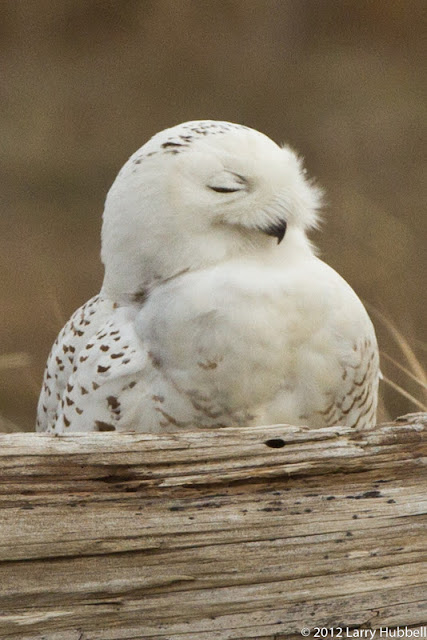 Clearly, it is a great choice to portray a magical, movie creature. (Did you see the Snowy Owl in the Harry Potter movies? Here is a link about its training.)

Last year was an irruptive year for Snowy Owls. Which means, for some reason more than the usual number of owls migrated south from the Arctic. This apparently happens every few years, but no one seems to be able to predict the irruptions. The birds may be avoiding severe winter weather, looking for food or there could be other factors that influence their behavior.

In an attempt to rectify this omission in my birding experience, my friend and avid birder, Marcus Roening, suggested we visit Stanwood. Once there we peered through his spotting scope across the large muddy fields. Sitting on the dike in the distance we saw a few small white dots. Technically, at that point I had seen a Snowy Owl.  The distant owls were very hard to see, however the no trespassing signs were much closer and very easy to see, so we did not get a better view.

I returned to Stanwood multiple times in the next couple of months, finally getting a few fairly foggy photos. The best was this moment when a Northern Harrier attempted to "harry" the Snowy Owl. The owl ducked and the harrier decided to look for a less formidable lunch. While interesting this was still not the desired quality of photo. 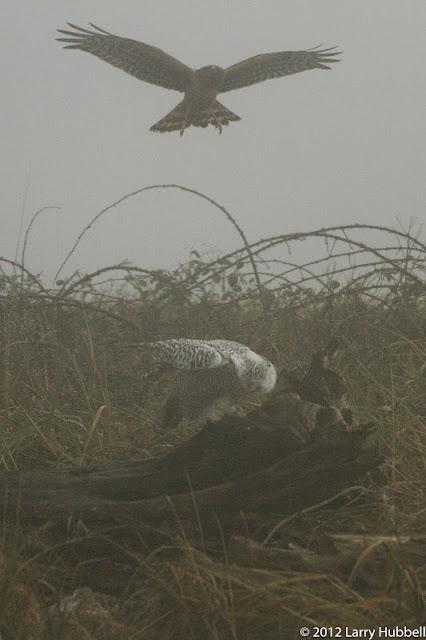 By February I was beginning to fear that the Snowy Owls would soon return to the Arctic. Marcus called to say there was another beautiful white bird visiting Washington. The bird he wanted to see was an extremely rare McKay's Bunting at Ocean Shores. (Click here to see the McKay's Bunting.) Marcus was also looking for someone to help with the driving.

He mentioned there were Snowy Owls at Ocean Shores as well. The 3 hour drive was well worth the investment. The next photo and the one at the beginning of this post are from Ocean Shores. 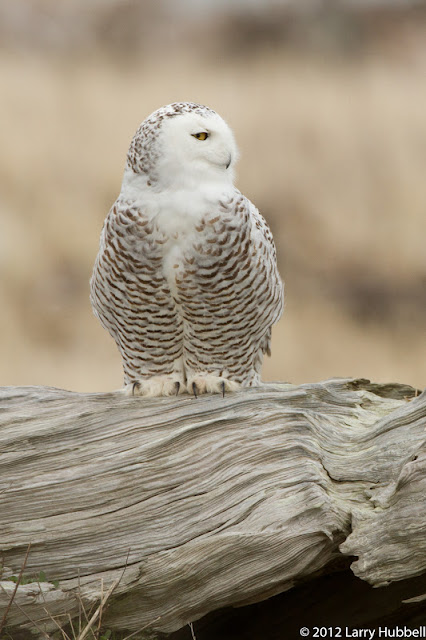 Can you see any differences in the birds in these two Ocean Shores photos? The second bird has larger and darker markings than the first bird. Some people think that adult males are the Snowy Owls which are most nearly pure white. If this is true then the second bird is most likely not an adult, male.

By the way, did you notice the eye lids and the facial "hair". It almost looks like the eye lid is covered in fur. The furry-looking feathers around the black claws on the second bird also demonstrate an ability to handle the cold. The next photo illustrates "furry" owl feet even better. 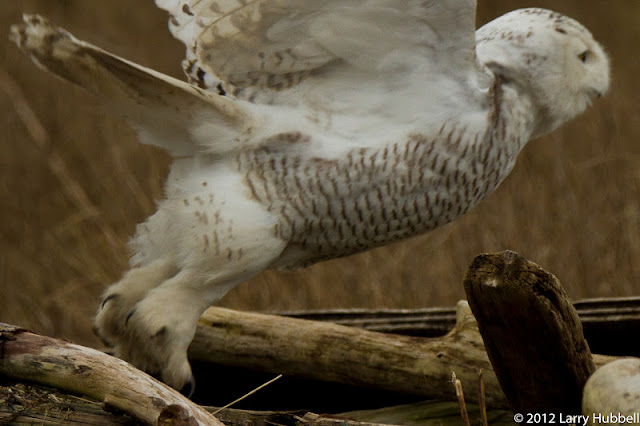 One of the most impressive moments at Ocean Shores was when one of the birds called out. The call was a rather soft and muted, "Keeeeeeey", which was repeated 3 or 4 times. 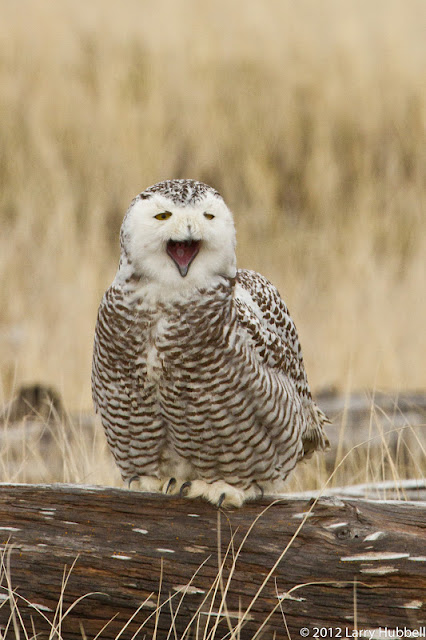 The width of the mouth was surprising, especially since the mouth is virtually invisible until it is opened. The width probably helps them to swallow creatures, like lemmings. At some point Marcus relayed another interesting thought. Have you noticed that these owls are seldom far from the ground? On the tundra there are no trees, so when the owls come south they do not have the habit of sitting in trees. Sitting on the ground or a log close to the ground must feel normal to them. The theory is that as the winter progresses they learn to move up onto posts and into trees. If this theory has merit we would have to wonder when owls fly south for a second or third time, do they remember the prior year's experience?

All winter there were reports of a dozen or more Snowy Owls at Boundary Bay in Canada. Finally, when the opportunity arose I answered the call and headed north. Much of the time the cold wind was blowing a horizontal rain off the bay, but the view was worth the exposure. 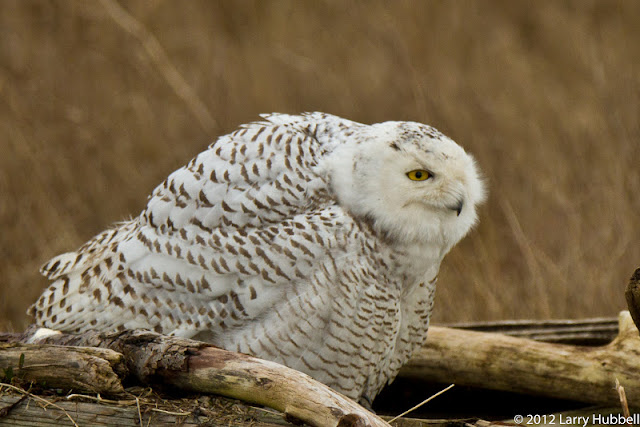 If the owls came south for warm weather, it appeared they might have stopped a bit too soon. 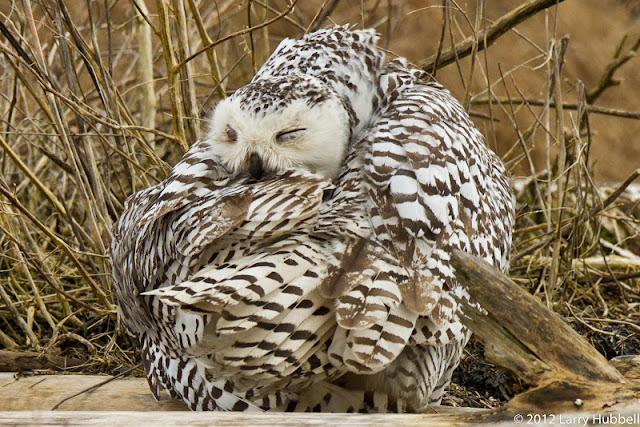 Sometimes they would stretch or twist into odd positions to help them keep warm. This almost looks like proof of a geometric principle, a round ball has the minimum amount of surface area (and therefore heat loss) for its volume.

The yellow eyes have a nearly magical glow.. 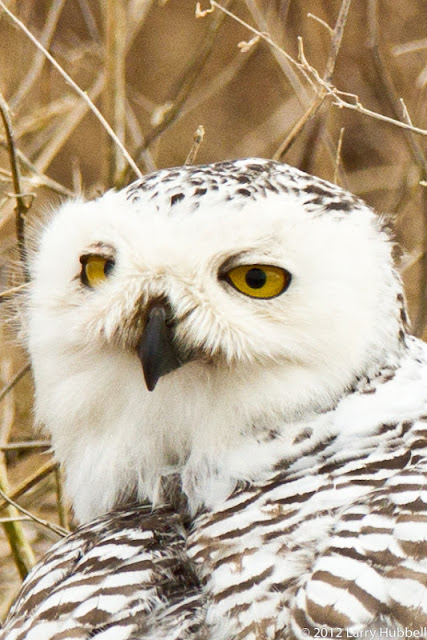 Does the shortness of the "fur" around the beak indicate that this is a young bird?

This photo makes me wonder, Does my right ear look like something good to eat? 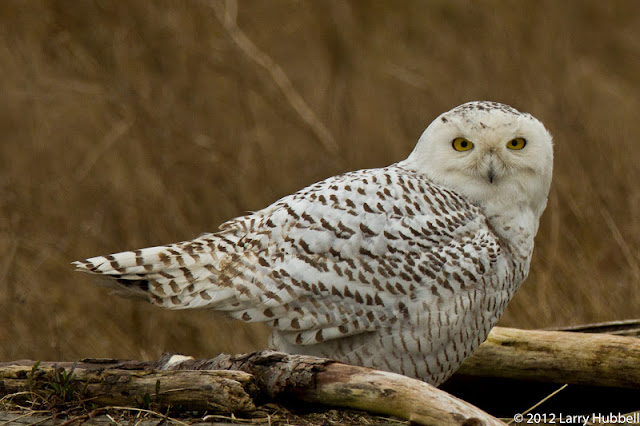 By the way, last Sunday a Snowy owl was spotted near Portage Bay. Then on Monday, one was seen at 11th and John on Capitol Hill eating a gull. By Tuesday morning all that was left were a few feathers. On Wednesday another one was spotted on Capital Hill and one near Lake City Way, but none near Union Bay.

There was also one photographed in Everett. By Thursday the sitings were even more wide spread including Port Townsend and the Nisqually Wildlife Refuge.

Some one mentioned that in years after a major irruption there is quite often an echo year or echo flight. Bud Anderson, from Falcon Research Group, suggests that it is too early to tell, the influx of Snowy Owls this year might end up being even larger than last year. Bud's comments can be read here.

Hopefully, the Snowy Owls are getting closer to Union Bay, so please keep your eyes open and leave a comment below if you see one.

This seemed like an appropriate departing shot of the Snowy Owls. 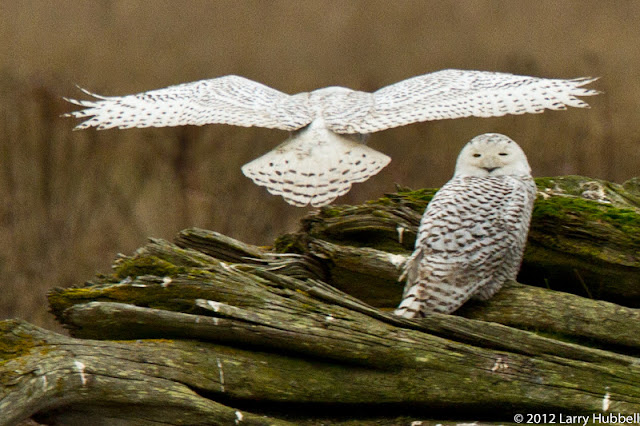 I hope you have enjoyed the magic of the Snowy Owls.

For the last few months I had been hoping we could build an osprey nesting platform near Union Bay. After exchanging emails with Chris Anderson, WDFW I have learned that our resident eagles are likely to harass the osprey and keep them from nesting successfully. I have seen the eagles steal food from osprey and cormorants on Union Bay. So it does not seem logical to invest in a nesting platform. I still hope the osprey may make a nest near Union Bay on their own. I also wonder if the eagles have anything to do with our not seeing Snowy Owls around Union Bay.

On another note, my daughter and some of her classmates have been working on a really wonderful class project. If you would like a truly feel good moment, check out their work.