Many young birds have nearly reached adult size and may be striking out on their own. An exception is this pair of young Pied-billed Grebes. 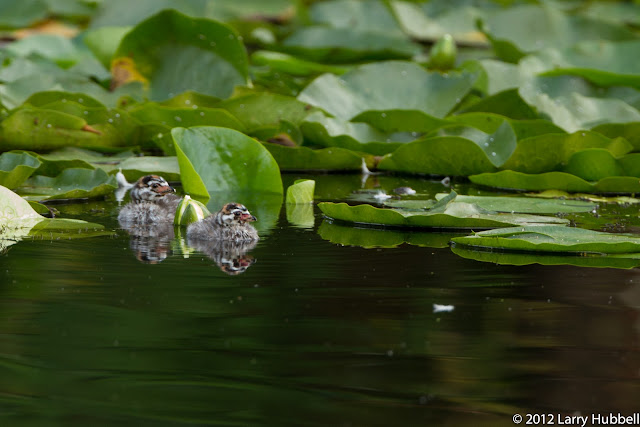 They are still following their mother around and calling for food. Young peid-bills were seen in the spring as well. This may very well be the second batch of young for their mother in 2012. As they mature they will lose their black & white stripes and the red patches. These birds were spotted this week near the south east shore of Foster Island.

A few days later, on Saturday morning, another bird of similar coloring was spotted nearby. 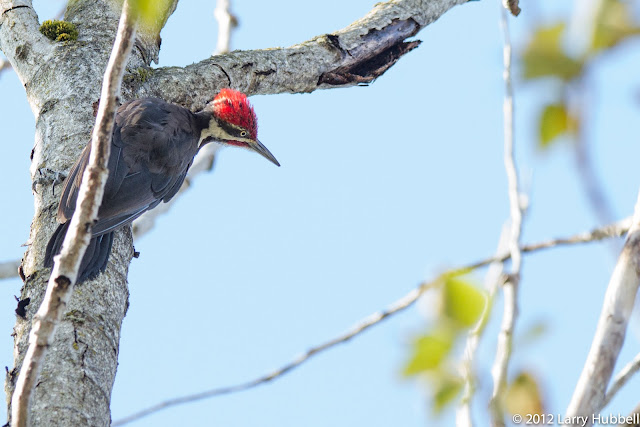 This Pileated Woodpecker (PW) seemed a bit small for a full grown adult. Could the sparseness of the red feathers indicate it is a young bird looking to establish its own territory?

While working away high in the Cottonwood trees the PW was interrupted by a second bird. The new bird came in very quickly and landed in the same tree as the woodpecker. 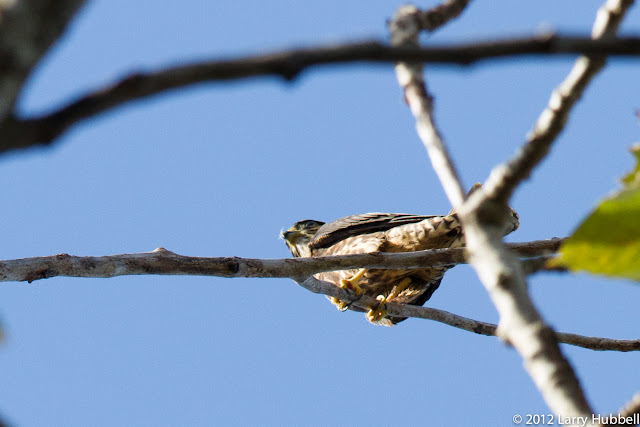 The curvature of the beak indicates this is a bird of prey. The small size (around 10" long) eliminates the Cooper's Hawk as a possibility, even though they are a very common bird of prey in this area. The shortness of the tail and the lack of white rump seems to eliminate the Sharp-shinned Hawk. The options seem to be a Kestrel or a Merlin. Which do you think it is?

In any case the PW was startled and flew to another cottonwood in the same stand. 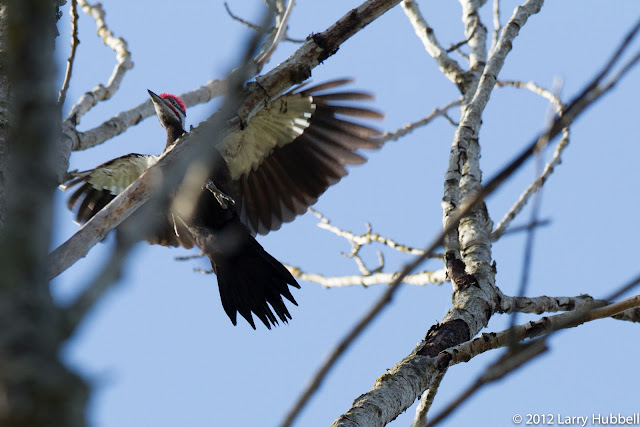 The falcon evidently decided the PW was a bit too big of an undertaking and left to find easier prey.

The sharpness of the PW claws and beak not to mention its strength and size may explain it's lack of fear for the falcon. 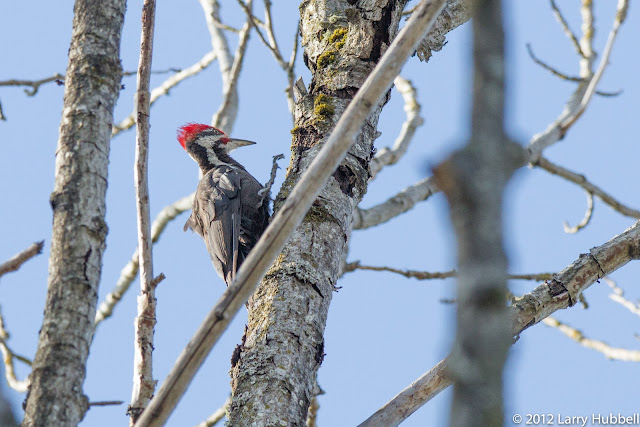 The woodpecker calmly returned to it feeding.

This was followed by grooming.

The strength of the PW is demonstrated by its ability to hang upside down and still strike the tree hard enough to remove visible chunks of wood.

Another young bird apparently staking out it's territory is this Great Blue Heron. 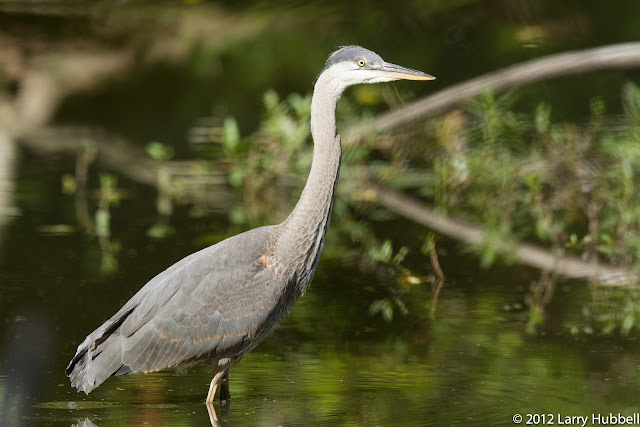 Every morning for the last week it has been feeding in the area between the mouth of the Arboretum Creek and Elderberry Island.

By the way it has been almost two weeks since any of the bald eagles have been seen near the Broadmoor nest. Once Eleanor learned to fly with confidence it seems she and the parents have left for a better place to hunt. Feel free to leave a comment below if you spot any of the bald eagles in the area or along 520. Of greatest interest would be a spotting of either of the young dark-headed eagle fledglings. 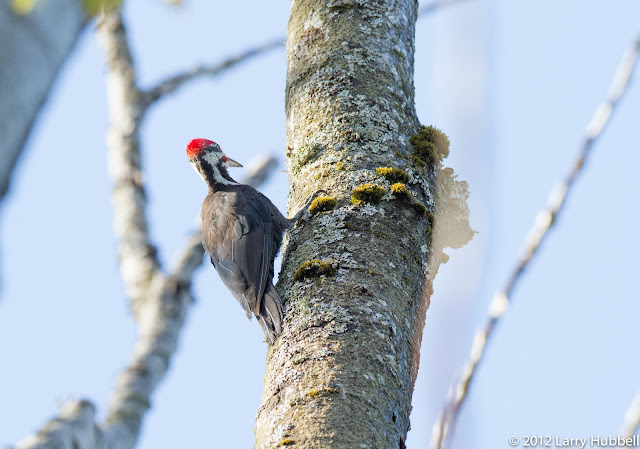 If you have any idea what kind of the growth is on the opposite side of the tree, please leave a comment below.

Earlier this week Barb asked if Cedar Waxwings (CW) have two red spots on their backs. While walking through my dining room I spotted Connie Sidles book titled "Second Nature". On the cover is a CW with, sure enough, two bright red spots. While on lunch break I checked out some of my old CW photos and found one with tiny little red spots. Here it is: 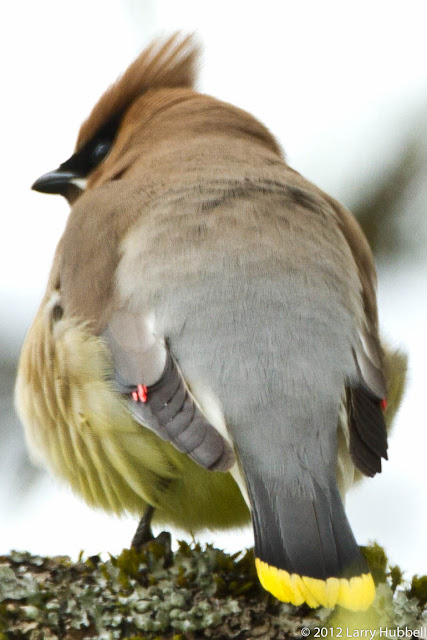 I like the bright yellow at the end of the tail as well. If you want to check the great photo on Connie's book it is at:

Please excuse the quality of the following photo. I added it to show another Merlin photo with similar brown, triangle-like markings near the tail. I think this is conclusive evidence that the bird above was a Merlin. 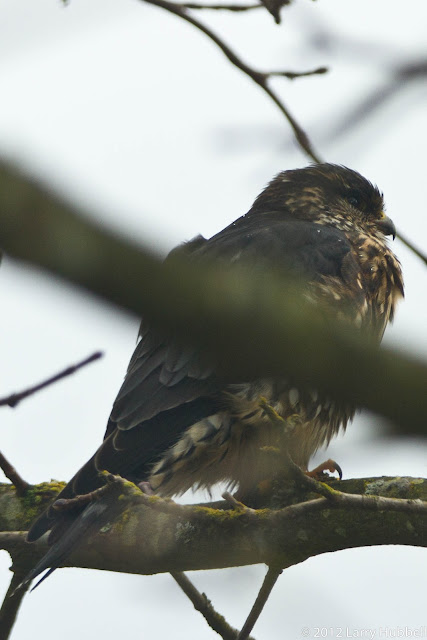 Posted by Larry Hubbell at 5:35 PM