Island Girl - On The Move:

Our last blog was about 69Z, a local, Seattle-born, non-migratory, American peregrine falcon. This week we are focusing on a different peregrine, named "Island Girl". Her picture and her incredible story are courtesy of Bud Anderson, the Falcon Research Group (FRG) and their Southern Cross Peregrine Project (SCPP). 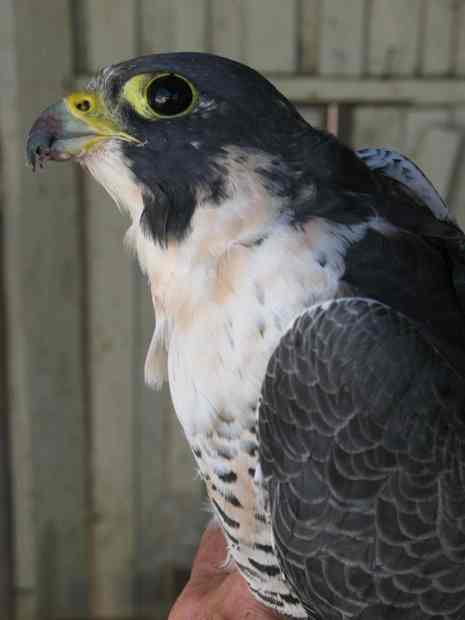 Island Girl is a migratory falcon, belonging to the sub-species Falco peregrines tundra, which should give you a hint as to where she spent the summer. Specifically, she was on Baffin Island, which is north of Hudson Bay. The Google Earth photos of Baffin Island show tundra, ice and polar bears.

Prior to her northward migration in April of 2009 the SCPP attached a solar-powered transmitter to Island Girl. Since that time she has flown over 60,000 miles and that just counts her migration miles. She generally spends just under 4 months migrating in any given year.

During our summer, between her two annual migrations that average 8900 miles one way, she most likely lays eggs, protects them and then later hunts almost constantly to feed her young. Finally, once they are close to her body weight and size she must teach them to fly and hunt. So her time spent on the island up north is not a relaxing vacation prior to her second migration of the year. While her lifestyle is extremely challenging her reward for her efforts is having two summers every year and no winters.

As you read this story Island Girl is just beginning her 8th migration trip of nearly 9000 miles in less than 4 years. Her destination is south of Santiago, Chile. She leaves from latitude 64 and will end up at latitude -35. Through a combination of modern technology, hard work and dedication (on the part of Bud Anderson, the FRG and the Southern Cross Peregrine Project) you can follow Island Girl's progress. If you follow the link and then scroll to the bottom of the page you can see the map of Island Girl's flights. This flight information is updated up to 3 times a day, as long as solar-power is available.

Bud is currently trapping peregrines on South Padre Island, Texas to support ongoing falcon research. You can read updates by Bud Anderson and his colleague Don McCall on the FRG blog.

On the second visit, after the Green Heron Yoga trip, the heron seemed a bit tentative and hesitant at first. 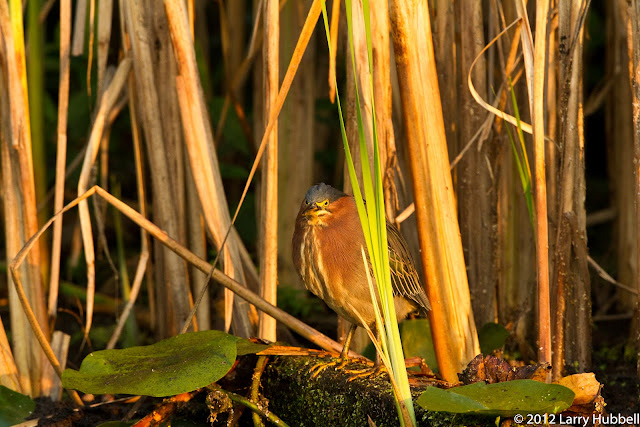 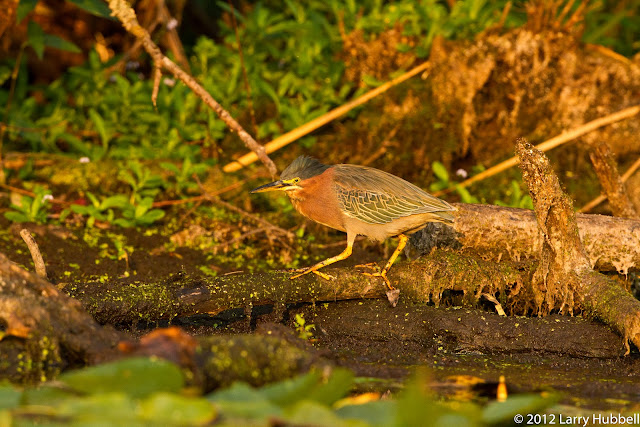 But this quickly passed as the heron headed to its favorite hunting spot. 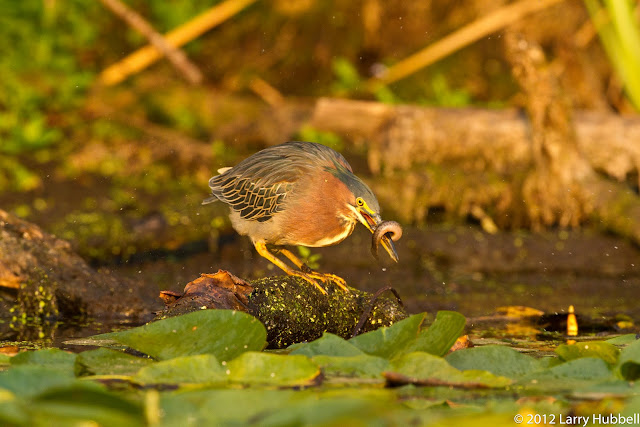 After a few minutes of focused intensity the heron was rewarded for its efforts. 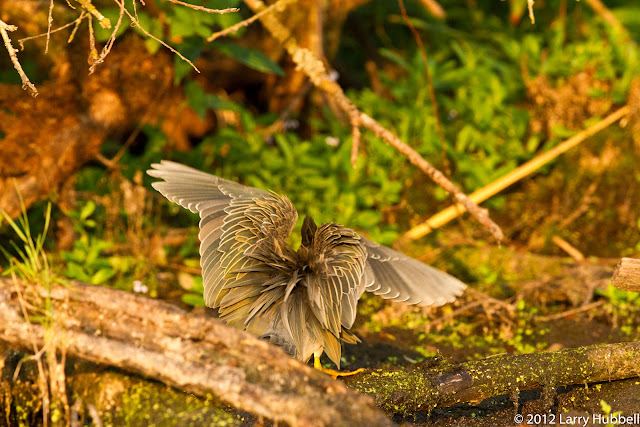 Not wanting to lose its first course the heron flew/hopped a few feet away from the water where it could safely arrange its meal into a single swallow. 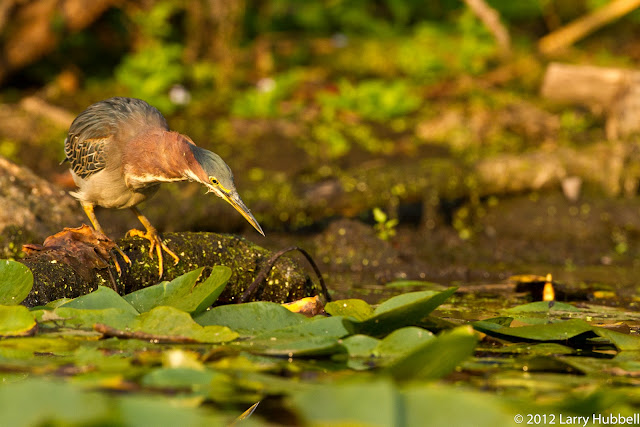 Immediately it returned to the hunting log. After a few minutes the hunting process was disturbed by some noisy gadwalls flapping their wings and trying to impress their mates.
The heron suddenly stood up and squawked loudly at the gadwalls. 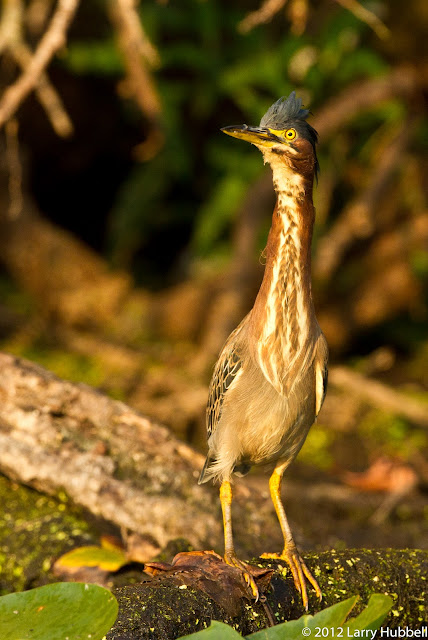 Surprisingly, the gadwalls immediately calmed down. 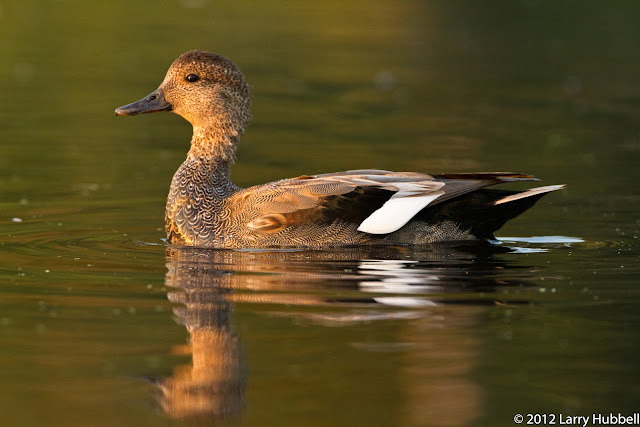 The heron went back to hunting. The second "fish" was caught in almost the same spot as the first one. However this time the heron took the second course and headed back to the peace and quiet of its roost in the cattails. 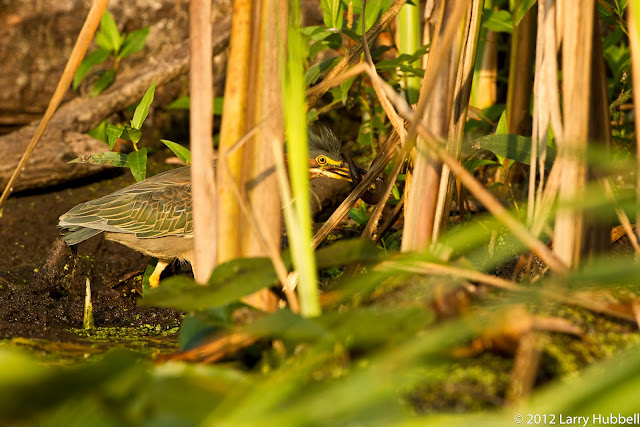 These fish seem to be a bit like eels, very long and skinny. If anyone has an idea what type of creature they are please leave a comment below.

Thank you and welcome to Fall on Union Bay!

Question for a future blog: