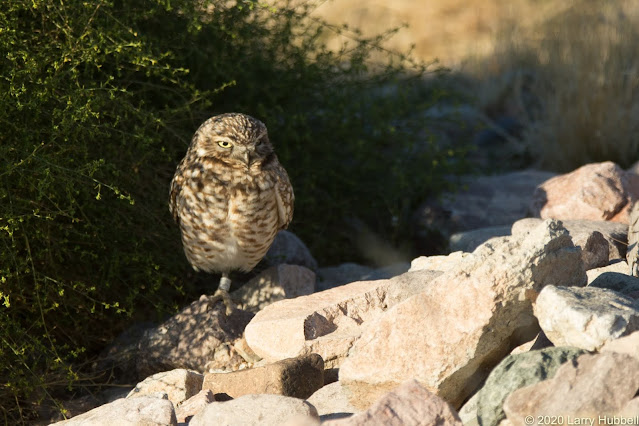 In western North America, Burrowing Owls are most normally found in arid grasslands or desert-like conditions. (This photo was taken in Lake Havasu, AZ in February of 2020.) The wet, wooded environment of Western Washington is generally not considered a Burrowing Owl's preferred habitat. 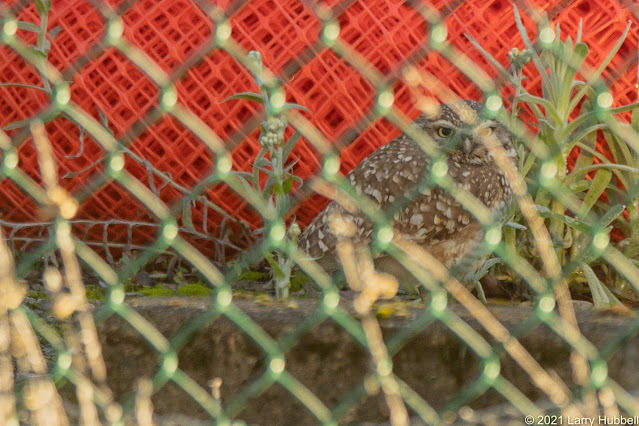 Nonetheless, Saturday morning near the mouth of the Cedar River, this single Burrowing Owl peered back at a warm-hearted gathering of owl watchers. 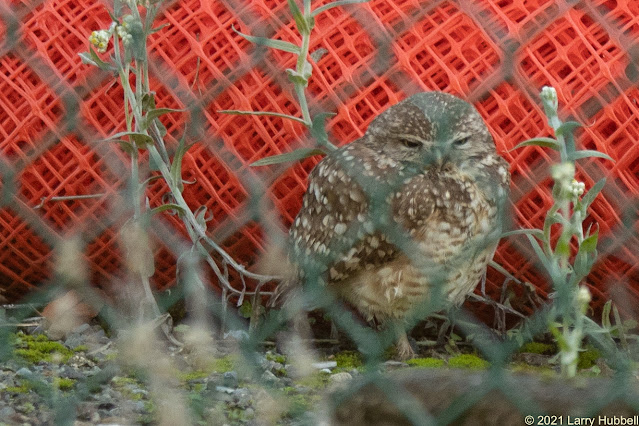 The owl watchers stayed west of the intervening fence and roadway. Virtually everyone was using either binoculars, scopes, or cameras to view the owl while maintaining a comfortable distance. Undisturbed by the whispering (and shivering) observers, the owl even came closer to the fence at one point. 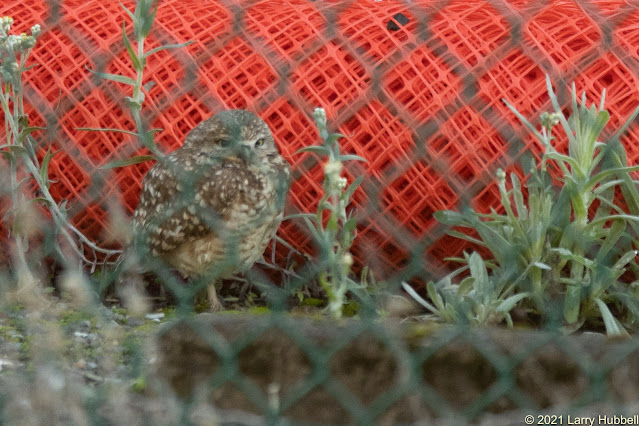 The big question, which no one could adequately answer was,
"What is a Burrowing Owl doing here!"
According to this dynamic Burrowing Owl abundance animation many North American, Burrowing Owls appear to head south for the winter. However, Birdweb shows us that some do spend the winter in Eastern Washington. Birds of the World (citation below) quotes, Conway et al. 2006, with saying "In Washington, more urban-nesting owls overwinter at their breeding site than owls breeding in agricultural areas." I suspect this has to do with the abundance of food in urban areas and possibly the heat-island effect. Still, the primary Washington urban areas inside their winter range would be the Tri-Cities.
No matter how you look at it, this little Burrowing Owl is a long way from its 'normal' habitat. Its presence is a wonderful treat for us, I just hope it is not too much of a "trick" for the Burrowing Owl to survive. 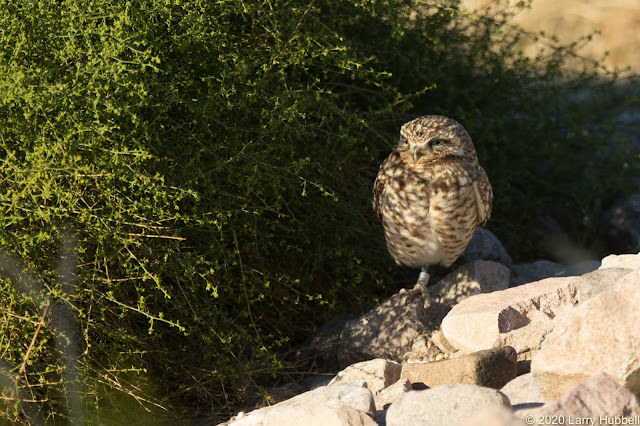 With all birds, the most critical aspect of survival is food. Birds of the World says that Burrowing Owls eat more invertebrates than vertebrates, by total count. 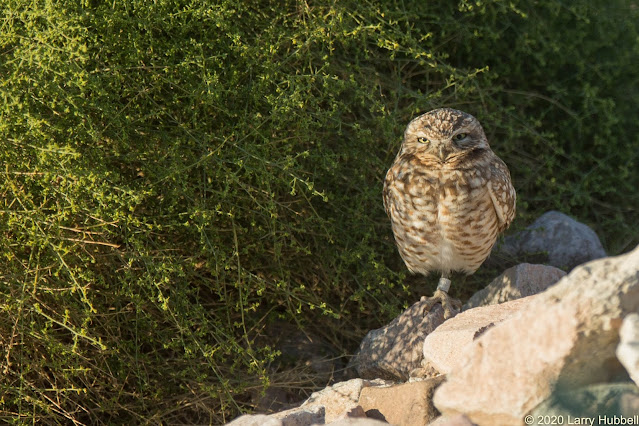 However when considering total weight, they eat more vertebrates like mice, or any other small creature they can catch, control and consume. Burrowing Owls generally weigh around five ounces. By comparison, our invasive Norway Rats weigh about a pound. They would be out of the owl's weight-class by at least a factor of three. 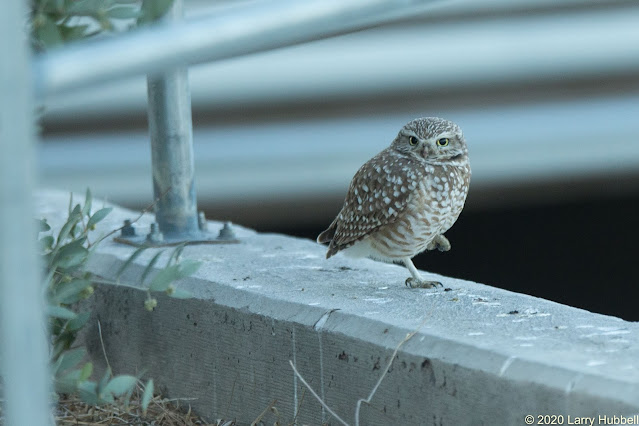 In Lake Havasu, stormwater ravines weave a web from the desert in the east, through the town, and down to the Colorado River to the west. Where the city streets cross the ravines, concrete sidewalls reinforce the mostly-natural drainage. The concept of weaving nature through the city seems to provide a generally positive natural co-existence. However, residents do have to take extra steps to protect their pets from coyotes.
When I first saw this owl I did not realize how completely it was integrated into this habitat. 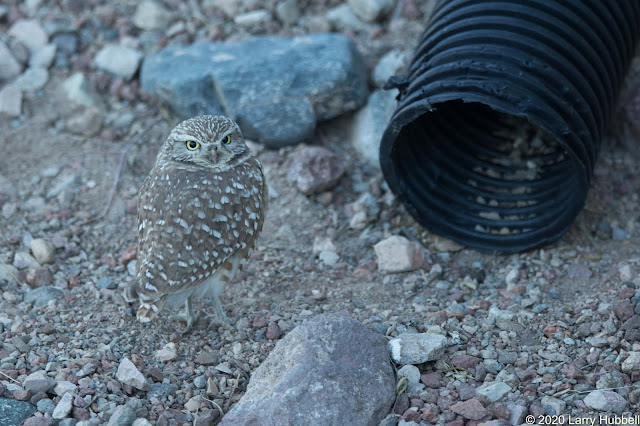 Just below the wall, an artificial borrow had been constructed. Since many of the mammals that would naturally create burrows, such as Prairie Dogs, Ground Squirrels, and Tortoises were mostly excluded from the city by human development, some thoughtful humans created these artificial nest sites - similar to how we build Wood Duck boxes in the Pacific Northwest. 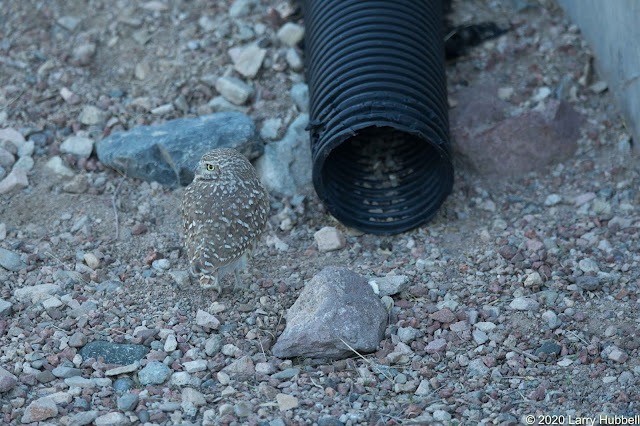 Even though I was perfectly aware of where the owl was, as soon as it turned its head, it almost disappeared. 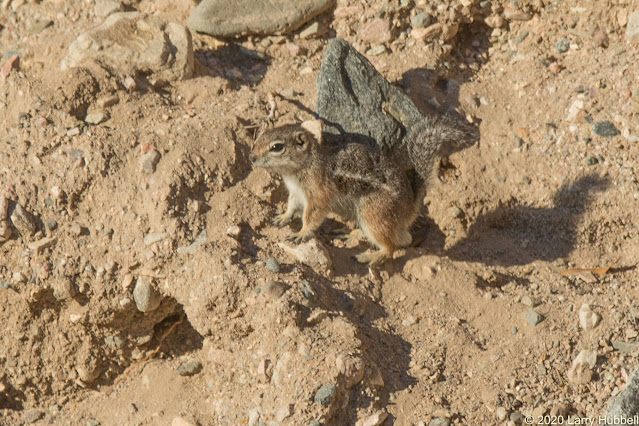 On the opposite side of the ravine, small burrowing squirrels kept an eye on the owl while they went about their business. I believe these are Harris's antelope squirrels. Click Here to read more about them. 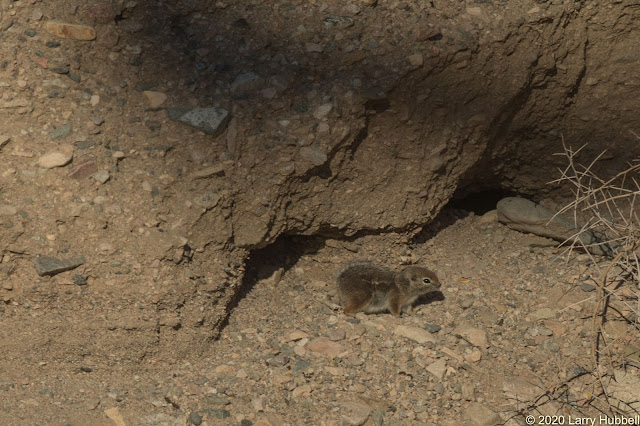 They are said to weigh 4 or 5 ounces, although they probably weigh slightly less without a tail. Maybe this is a young one since it also does not seem to have the white stripe on the side yet. I suspect, at least by weight, that these were the Burrowing Owl's primary source of sustenance. 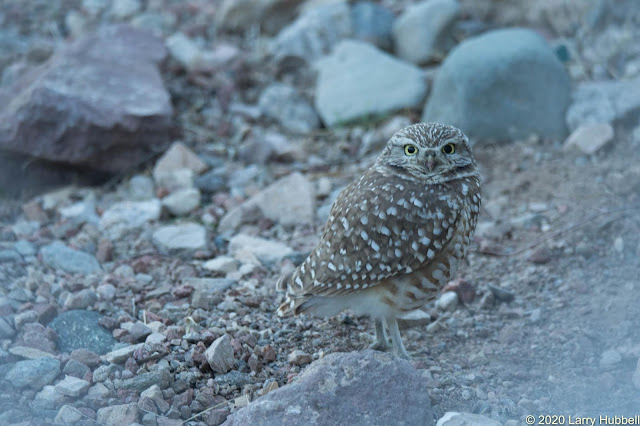 Burrowing Owls can fly. However, during my limited observations, they seemed to prefer to stay on the ground, close to a burrow, and then scurry back to safety if they felt threatened. I wish I had had the patience and time to sit and document the Burrowing Owl's hunting technique.
In any case, just seeing a Burrowing Owl in Western Washington is a wonderful Halloween treat.
I hope everyone has a dry, safe, and Happy Halloween!
Larry

Poulin, R. G., L. D. Todd, E. A. Haug, B. A. Millsap, and M. S. Martell (2020). Burrowing Owl (Athene cunicularia), version 1.0. In Birds of the World (A. F. Poole, Editor). Cornell Lab of Ornithology, Ithaca, NY, USA. https://doi.org/10.2173/bow.burowl.01
Going Native:
Each of us, who breathe the air and drink the local water, needs to watch and protect our local environment. Native plants and trees encourage the largest diversity of lifeforms because of their long intertwined history with our local environment and native creatures. I have been told that even the microbes in the soil are native to each local landscape. I hope we can inspire ourselves, our neighbors, and local businesses to respect native flora and to support native wildlife at every opportunity. I have learned that our most logical approach to native trees and plants (in order of priority) should be to:

1) Learn and leave established native flora undisturbed.
2) Remove invasive species and then wait to see if native plants begin to grow without assistance. (If native plants start on their own, then these plants or trees are likely the most appropriate flora for the habitat.)
3) Scatter seeds from nearby native plants in a similar habitat.
4) If you feel you must add a new plant then select a native plant while considering how the plant fits with the specific habitat and understanding the plant's logical place in the normal succession of native plants.

My intention in my weekly post is to include at least one photo each week and visually challenge us to know the difference between native and non-native lifeforms.
(By the way, my friend Tom Brown pointed out that the application named 'Wildflower Search' is extremely helpful. Click on the highlighted link to see for yourself.
Also, Jane Lundin has created a small package, with a lot of critical information that looks quite handy, and light, for backpacking in the mountains in Springtime. It is titled, Mountain Wildflowers of Washington.)
Another idea that integrates perfectly with living in harmony with nature is the concept of Forest Gardening. Native Americans collected and nurtured dense multi-layered gardens of native herbs, plants, shrubs, and trees that produced food and herbal medicines. Even after 150 years of no maintenance, the gardens are essentially intact and the diversity of life remains significantly higher than in the surrounding forests. Click Here to learn more. 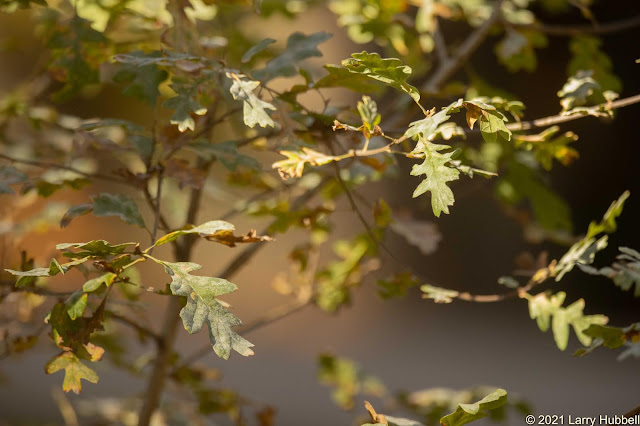 Which species of tree is this? Is it native to Union Bay?


Scroll down for the answer.
****************
Oregon White Oak: Yes. It is a native. However, they are hard to find in our area. I suspect they were never plentiful around Union Bay. They are under pressure from human development, conifer encroachment, and less than optimal habitat which has not helped. Click Here to learn more.
*****************
The Email Challenge:
Over the years, I have had many readers tell me that Google is no longer sending them email announcements. As of 2021, Google has discontinued the service.
In response, I have set up my own email list. With each post, I will manually send out an announcement. If you would like to be added to my personal email list please send me an email requesting to be added. Something like:
Larry, I want to see more of nature. Please add me to your personal email list.
Thank you for your patience and interest! 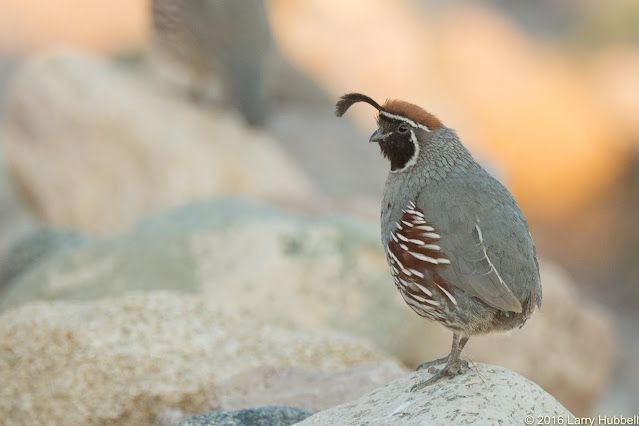 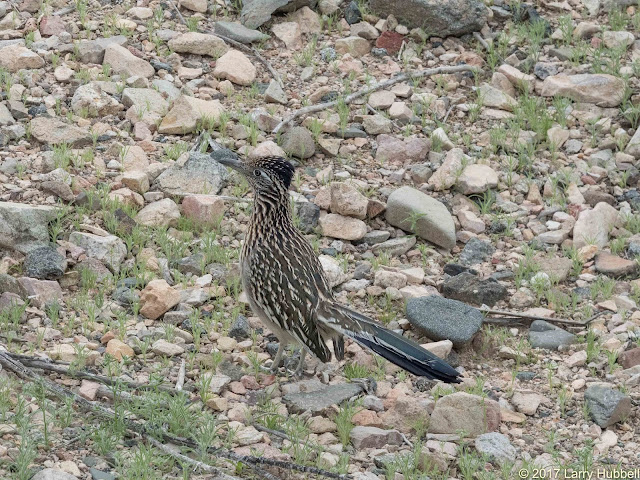 Can you name these two species?
Scroll Down for answers.
A: Gambel's Quail
B: Greater Roadrunner

Posted by Larry Hubbell at 3:30 PM