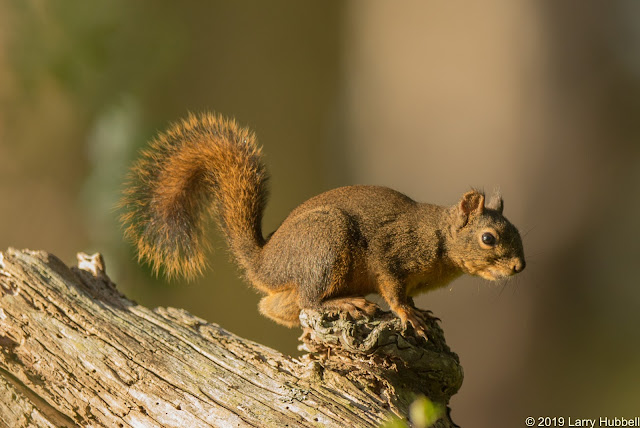 This photo was taken near Port Townsend in May of 2019.
Chickarees are native to the Pacific Northwest. Their name is apparently inspired by the sounds they make. They can also be called Pine Squirrels because of they prefer the seeds of coniferous trees. However, "Douglas Squirrels" is their most common name. It was given in honor of David Douglas. He documented nature in the PNW in the early 1800s. However, given that the squirrels, as well as Native Americans, have been here for thousands of years I suspect there must be a more ancient and appropriate name. So far, I have found this wonderful Lushootseed language website which provides a general name for squirrels but not a unique name - just for Chickarees. 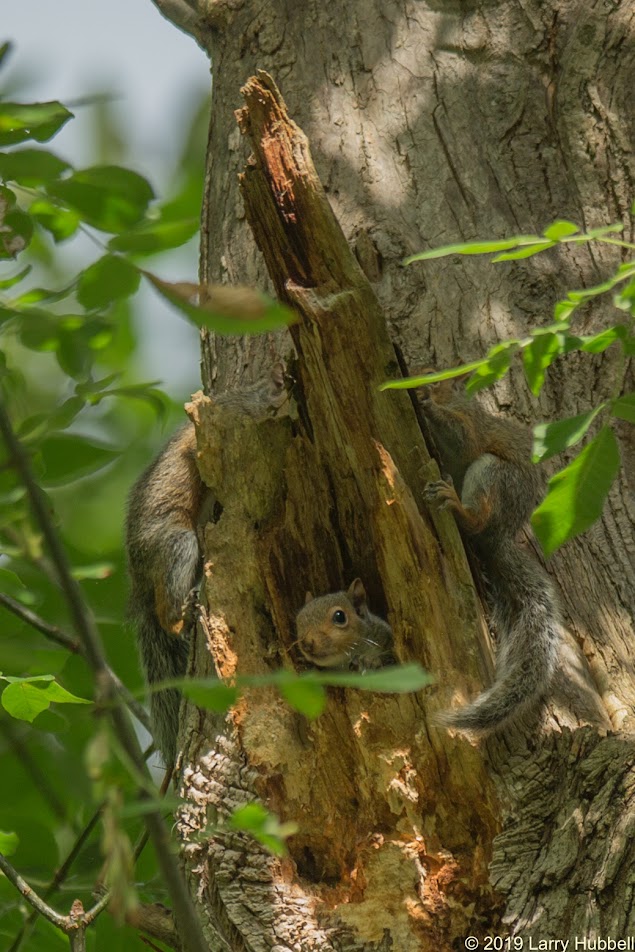 The squirrels we commonly see in our area of Seattle are Eastern Gray Squirrels. In this September 2019 photo, taken at the northern end of the Arboretum, three Eastern Gray Squirrels were circling and chasing each other in and around this den where, I suspect, they were born.
Eastern Gray Squirrels were introduced in Seattle in 1925. They are significantly larger than the Chickarees. The Oregon Department of Fish and Wildlife mentions that typically in 5 to 10 years after introduction Eastern Gray Squirrels tend to displace native NW squirrels. Early in 2019, after living in Montlake for over thirty years, I had no memory of ever seeing any native squirrels in my neighborhood - which includes the Arboretum.
Later in the year, I was happily surprised when my friend Kathy mentioned she saw a Douglas Squirrel in the south end of the Arboretum. Her sighting helped to breath life into my dream of a local flourishing native ecosystem inside the City of Seattle. 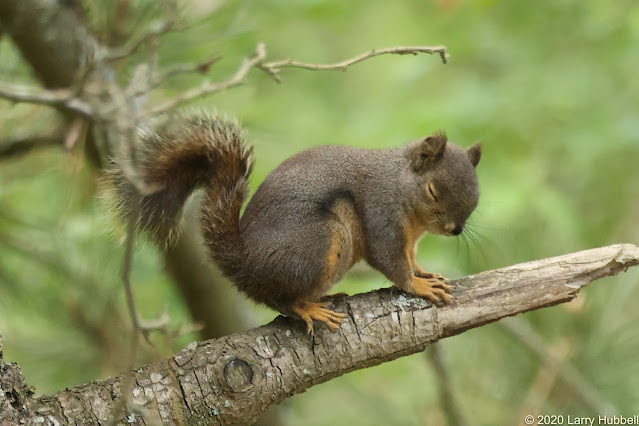 In the Spring of 2020, the dream continued to grow when I finally saw and photographed a Douglas Squirrel in the Arboretum. 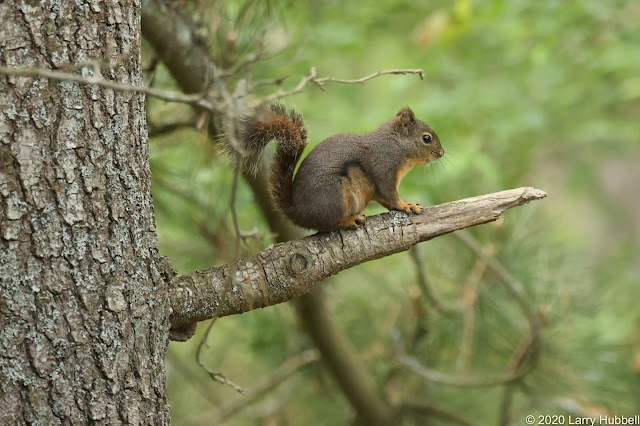 Depending on the time of year a Chickaree's coat can be primarily gray or heavily interspersed with a reddish-brown. However, the underside is always a more or less faint yellowish-orange. 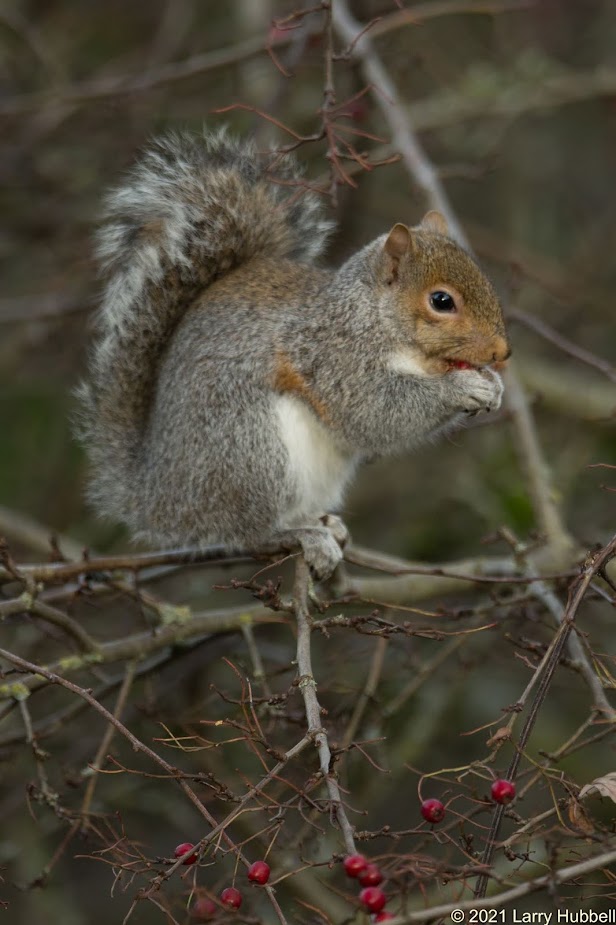 This contrasts with the pure white on the underside of the larger Eastern Gray Squirrels, 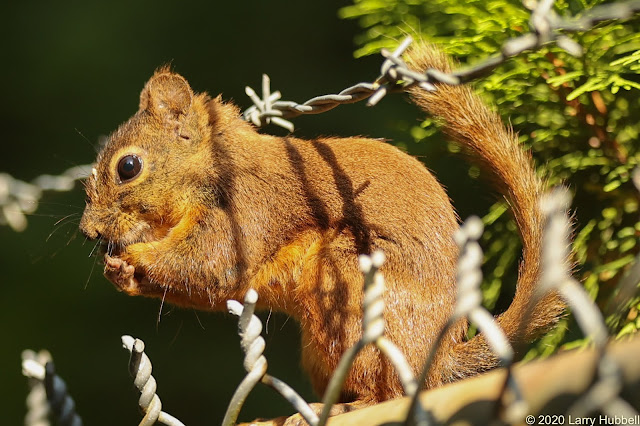 If one looks close you can observe that Douglas Squirrels have small tufts of hair on the tops of their ears - unlike the Eastern Grays. Not only are the Chickarees smaller, their tails often appear significantly thinner as well.
When I saw two Douglas Squirrels in the Spruce trees just north of the Sorbus collection I became very excited. I was hoping for reproduction and a Chickaree reclaiming of the at least part of the Arboretum. 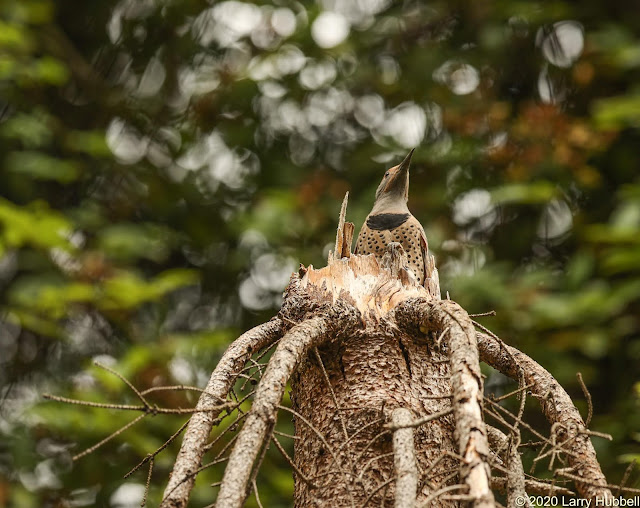 Around that time, while watching a Douglas Squirrel I noticed a Northern Flicker on top of a dead snag. Speaking of snags, Chickarees often nest in old woodpecker nests or natural hollows in trees. Like many other creatures they need us to leave the dead trees standing whenever possible. Due to the softening of the wood, dead trees often contain the most promising nest sites. A Chickaree near the base of the snag noticed the woodpecker as well. 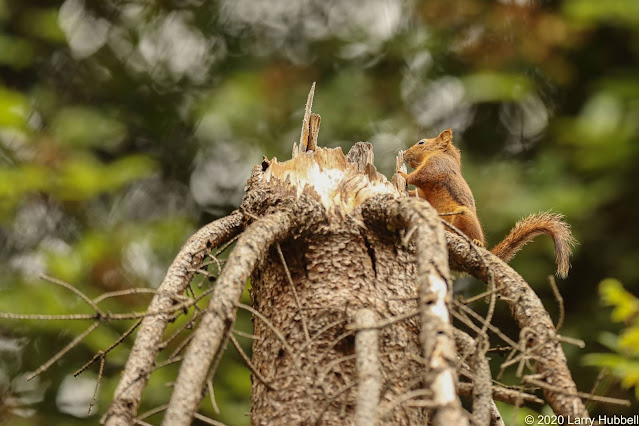 In a surprising show of confidence the Chickaree worked its way to the top of the snag to investigate. 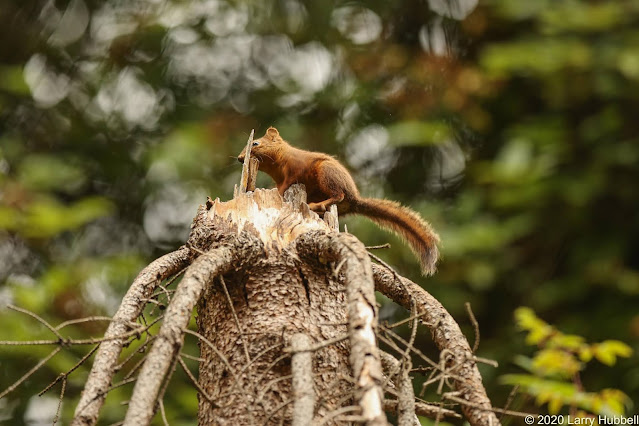 The Flicker choose not to argue. It took to the air and left the snag to the Chickaree. 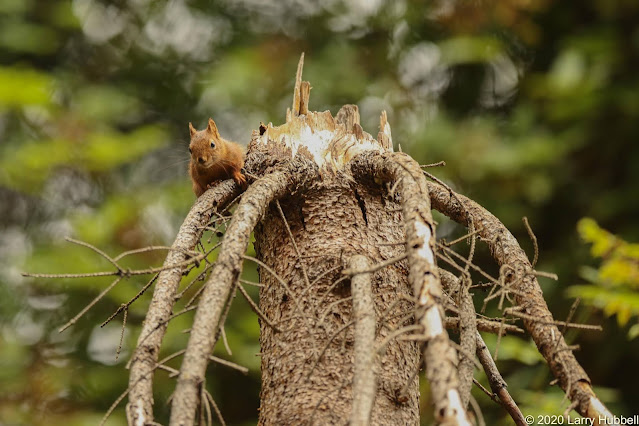 Looking back and realizing how often I saw the Chickarees in this area I suppose its mild aggression was actually a demonstration of territorial ownership.
Sadly, later in the year my friend Tom informed me he spotted the carcass of a Douglas Squirrel in the same area. That is not surprising since as of 2020 there were multiple predators in the area. For example: 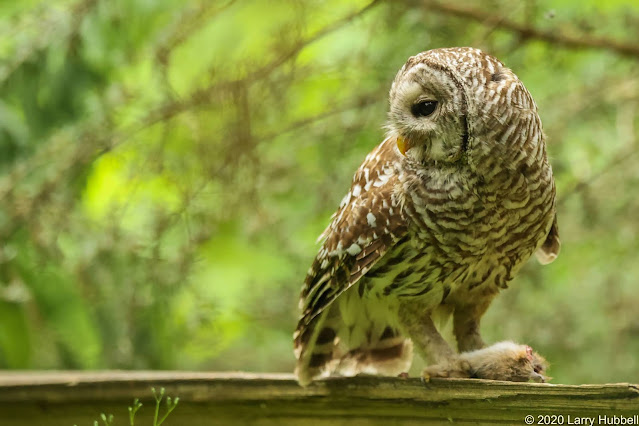 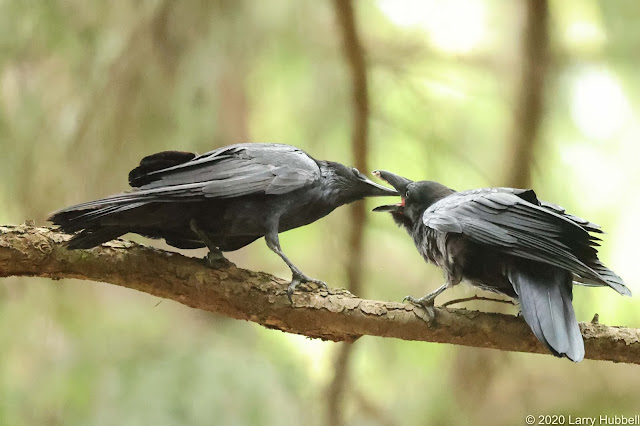 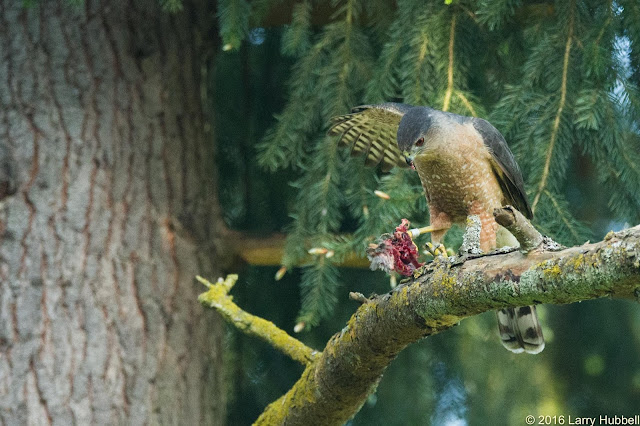 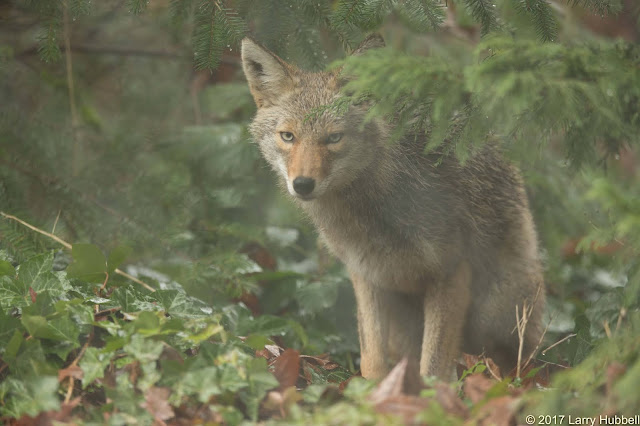 Plus, the quiet Coyotes would happily add a squirrel to their menu and... 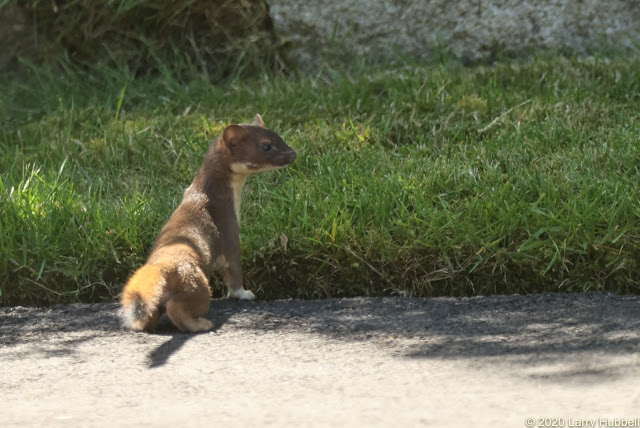 ...in 2020, I even saw a Long Tailed-Weasel in the neighborhood. A Chickaree might be too big for the Weasel (or maybe not), but even if so, the Weasel would be highly attracted to the young in a Chickaree nest.
This weekend I did a little online research on the history of Montlake. I found a photo that shows the area and the caption that states the land was virtually cleared of the huge, ancient, cone-bearing trees, that would have supported the original Chickaree population, in 1896. (Click Here and scroll down to page 16 to see the photo.)
It is appropriate that the small native Chickarees prefer the tiny seeds from coniferous tree, while larger Eastern Gray Squirrels prefer the fruit, nuts and acorns from deciduous trees. However, when we add in the introduction of the larger Eastern Gray Squirrels and an Arboretum full of predators it becomes a bit difficult to imagine the Chickarees making a come back.
However, the Chickarees have a secret weapon - their confidence. On Christmas Day, 2020 as I walking among the Spruce and Sequoia trees north of the Wilcox Bridge, I saw two squirrels running full-speed across the ground. When I looked closely I saw the first was an Eastern Gray Squirrel. The darker smaller streak, close on its tail, chased it to the base of a conifer and stopped. The Eastern Gray escaped to the canopy above. I stared in amazement at the little Chickaree. I immediately concluded that with their tough, confident, Can-Do attitude the Chickarees are going to be OK here. They are tough enough to handle the competition and quick enough to usually avoid the predators.
I suspect the main factor enabling their return is a growing supply of food. The spindly little conifers left behind in 1896 and many of the collection conifers planted over the last 90 years have grown significantly. They have become much larger trees with cones full of seeds. I believe these coniferous seeds are now providing the food that maybe fueling a Chickaree resurgence.
Last week, in one 24 hour period, I saw Chickarees in three distinct areas within the Arboretum: 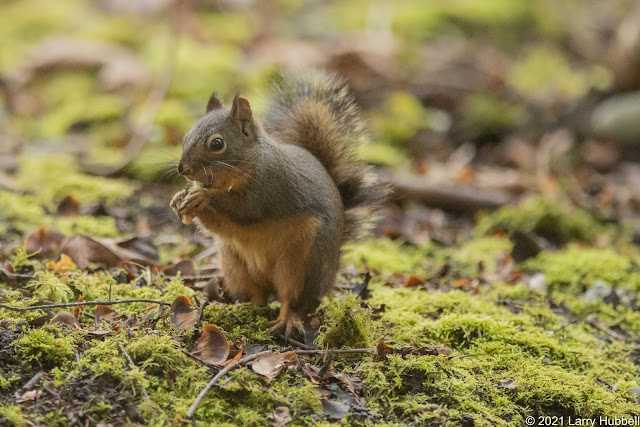 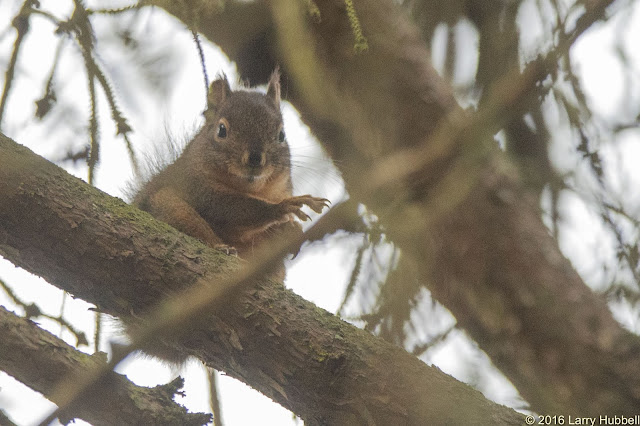 North of the Sorbus Trees among the Spruce collection and... 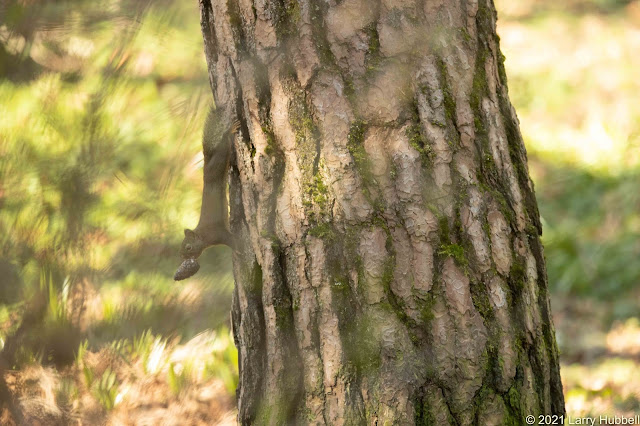 ... in the Pinetum.
It is wonderful to see them returning. Watching them is a healing salve for a weary soul.
I believe that knowing and treasuring our native lifeforms is a responsibility of everyone who breathes the air - supplied primarily by our native conifers - and drinks the water fresh from the Cascade Mountains. By welcoming the native life in the city we provide future generations an invaluable daily connection to these ancient lifeforms.
Imagine a future when all the children of Seattle get to experience the joy of sunlight piercing a cathedral of ancient evergreens, the spongy feel of needles beneath their feet and the delight of viewing native fish in a clean Seattle stream. (Click Here to learn more about the vision shared by the Friends of Arboretum Creek.)
Imagine our children knowing, from an early age, the deep and distant "graak" of a Raven passing over, the melodic sound of Bald Eagles defending their territory and...
...the exasperated scolding of native Chickarees when they are disturbed.
It is truly amazing to have all of this life in a free city park like the Arboretum. Thank you to all of you have donated your time and/or funds to help the Arboretum continue! 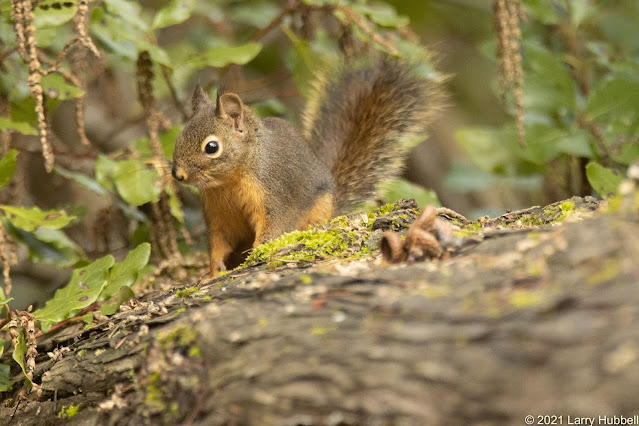 Leaving the next generation a park, and hopefully a city, full of ancient and native lifeforms co-existing with humanity, is a truly amazing legacy.
Have a great day on Union Bay...where nature lives in the city and Black Birders are welcome!
Larry
Going Native:
Each of us, who breathe the air and drink the local water, need to watch and protect our local environment. Native plants and trees encourage the largest diversity of lifeforms because of their long intertwined history with our local environment and native creatures. I have been told that even the microbes in the soil are native to each local landscape. I hope we can inspire ourselves, our neighbors, and local businesses to respect native flora and to support native wildlife at every opportunity. I have learned that our most logical approach to native trees and plants (in order of priority) should be to:

Not counting the Eastern Gray Squirrels, which of the other species shown above was not here when David Douglas visited the Pacific Northwest - circa 1826.

Scroll down for the answer.
***************
Barred Owl: " from eastern U.S. First documented in Washington in 1973; first reported nest in Discovery Park in 1982." This information was found on the Urban Raptor Conservancy website.
**************
The Email Challenge:
Over the years I have had many readers tell me that Google is no longer sending them email announcements regarding my posts. Even more frustrating when they go to 're-sign-up', hoping that will enable them to once again start receiving the announcements, they get a message which says 'Sorry, you are already signed up.' Google has not responded to my requests for help with this issue.
My functional workaround is to set up my own email list and each week I manually send out a new post announcement. If you are experiencing the issue and would like to be added to my personal email list please send me an email requesting to be added. Thank you for your patience!

My email address is: LDHubbell@Comcast.Net
One more photo: 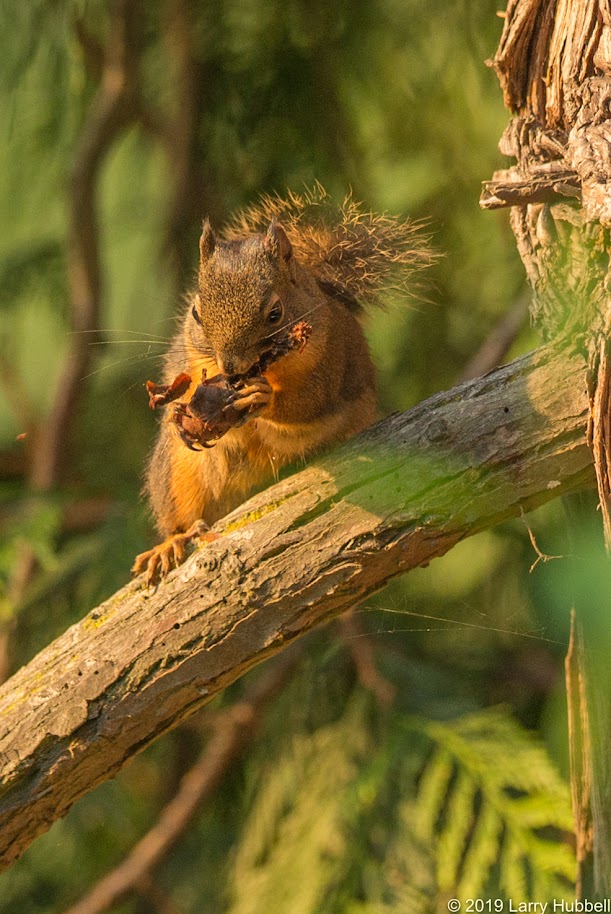 Posted by Larry Hubbell at 3:22 PM