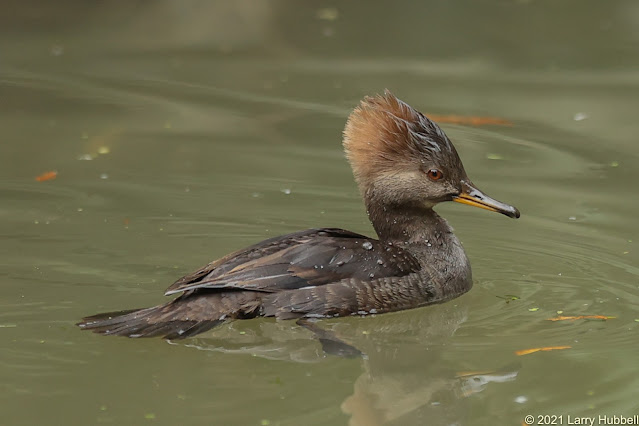 Humanity has envied birds in flight for as long as we have had eyes. If you doubt my claim just google, "humans with wings". Amazingly, after centuries of failure human-powered flight has actually happened - although, it did require an automotive boost for liftoff. Surprisingly, the achievement seems to have passed without the hype and awareness one might have expected. Nonetheless, we are still no competition for birds.
This small, Hooded Merganser can fly nearly 50 mph, and also out-maneuver humans underwater and on the surface if both species operate under their own power. 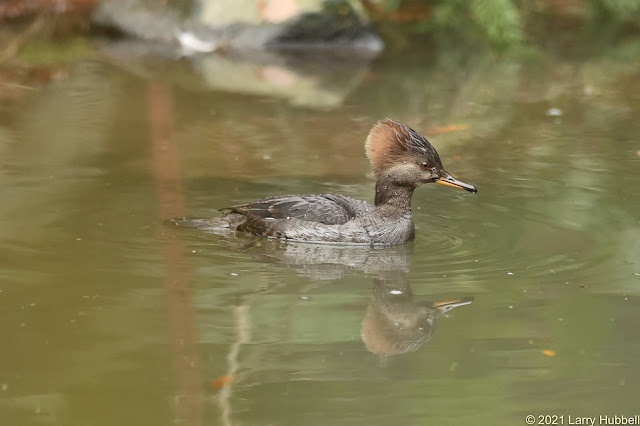 This week, I was fascinated by her ability to dive. From a sitting position, perpendicular to the water's surface, she would arch her body and submerge fast enough to catch small fish. I could not see what she was eating. However, she dived dozens of times over more than half an hour. Maybe, she was catching the salamanders that are known to inhabit this pond. 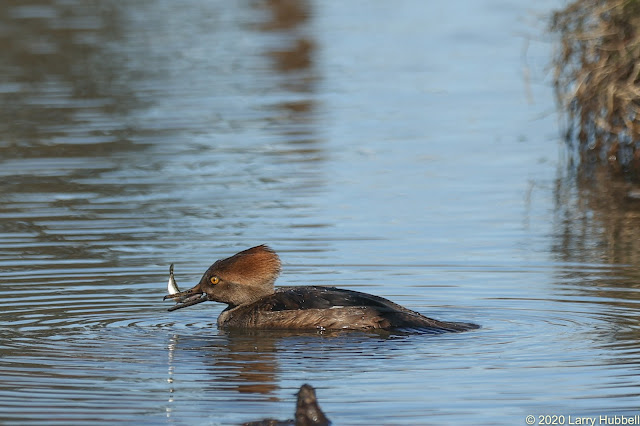 Here is a photo of a Hooded Merganser eating a fish, from January 2020. Given the discussion in the first post of this year, regarding grouping birds in foraging guilds, we can say that Hooded Mergansers eat multiple types of foods and belong to multiple guilds.
They are Fresh Water-Diving Piscivores, Bottom Water-Gleaning Insectivores, and Bottom Water-Gleaning Crustaceovores. All About Birds suggests they will even eat vegetation which makes them Herbivores. Plus, if our hero really was eating salamanders that would make her a Carnivore as well.
Here is a question to be answered in the Going Native section below:
What is the gender of the bird which is eating the fish? 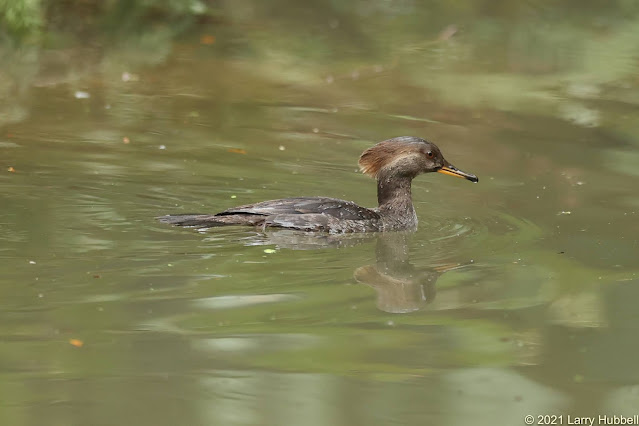 Lowering her crest was the first obvious indication of her intent to dive. It streamlined her head which would no doubt reduce resistance when entering the water. Less obvious was the change in her buoyancy. She apparently squeezed the air out of her feathers or maybe stopped paddling with her feet. In either case, she clearly settled deeper into the water, when compared to the first two photos. 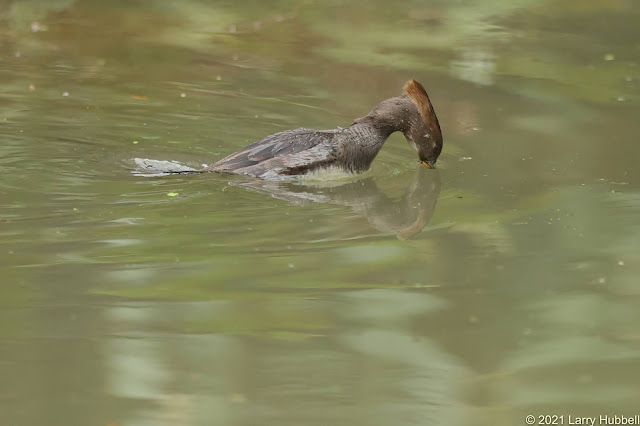 A split-second later her bill pierced the surface. At the moment of entry, her bill was perfectly vertical. The energy to push her below the surface did not result from a "running" start. We would see splashing, or at least some waves if that had occurred.
By the way, from this point forward, the photos will be mixed from multiple dives to better illustrate what happens during the process. 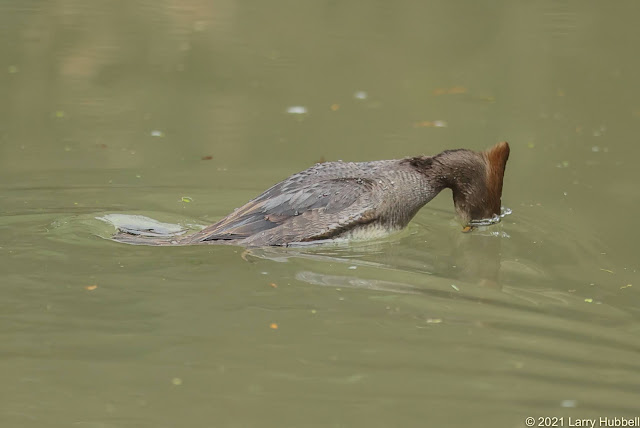 Here, it is obvious that the downward thrust of her tail provided the force which pushed her body and initiated her dive. 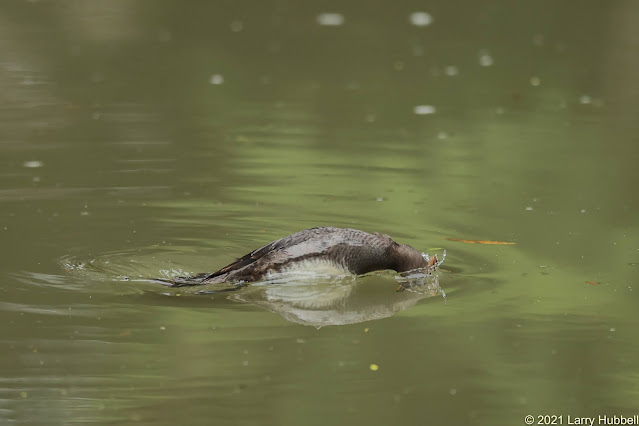 It is almost like she tried to leave the surface of the water before reentry. The height of her dives varied but never got much higher than this.
I remember seeing a Western Grebe leap much higher, directly off the water, when it dived. Virtually, its whole body was airborne at one point or another. 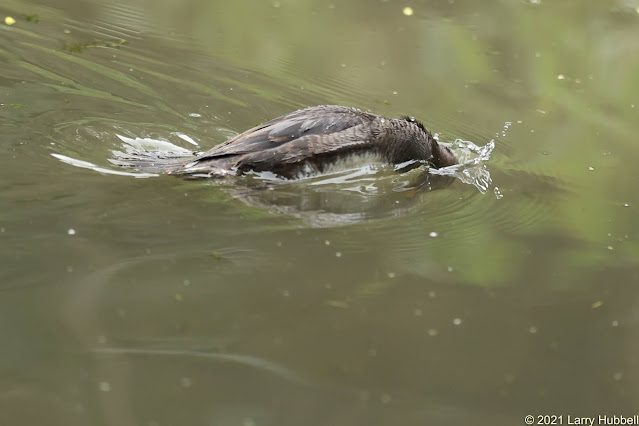 The depression in the water's surface, around her tail, is obvious.
You may wonder whether she also used her feet to produce momentum. More on this in a moment. 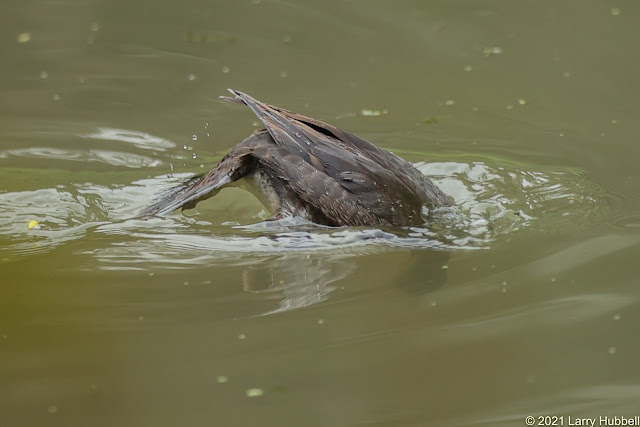 Without a higher leap, she was unable to turn her body perfectly vertical. However, by pointing her head straight down she was clearly redirecting her momentum. 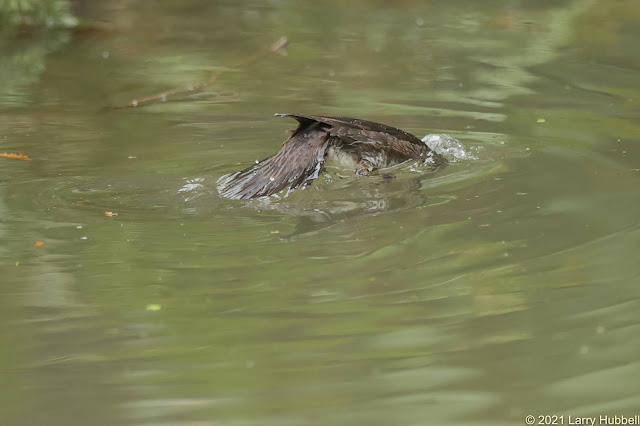 In this case, the small bow wave produced by the back of her neck seemed to indicate wasted forward motion. Her tail may have started to be a drag, as well. 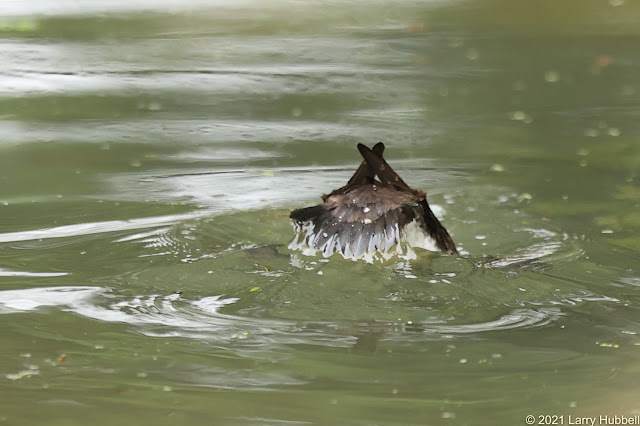 The crossed wingtips indicated that the wings were folded away and not used during the dive. At times, her tail seemed to lift clear of the water with ease. 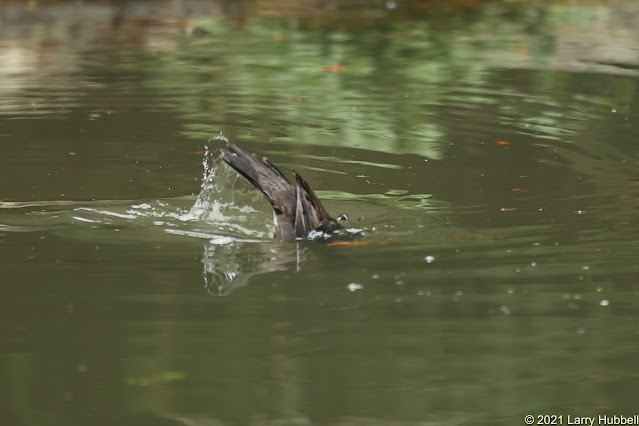 Other times, the size of the splash indicated that her tail was slowing her down. Although, it could have been intentional. The Woodland Garden pond is small and shallow. Maybe her prey was nearby and additional speed would have resulted in a less successful hunt.
Due to the reflections, we will not usually be able to see what was happening below the surface. The next few photos are exceptions that provide shadowy glimpses of her legs.
These next two photos are stamped with the exact same time, down to the second. This implies that the difference in time from sitting-on-the-surface to only-the-tail-being-exposed was less than a second. 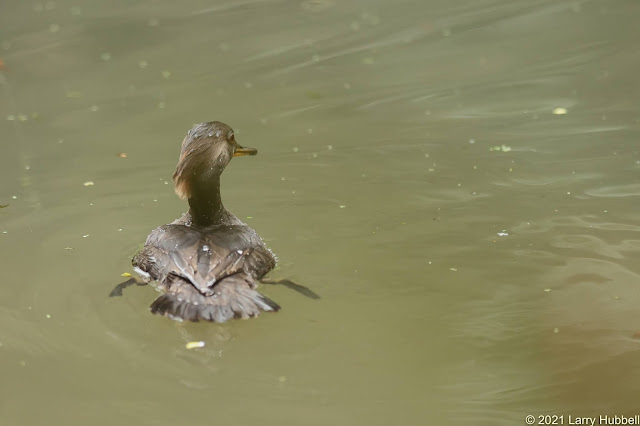 At this point, the feet were being held out from the body. From this position, it appears quite possible that the feet might squeeze toward the tail to help power the dive. 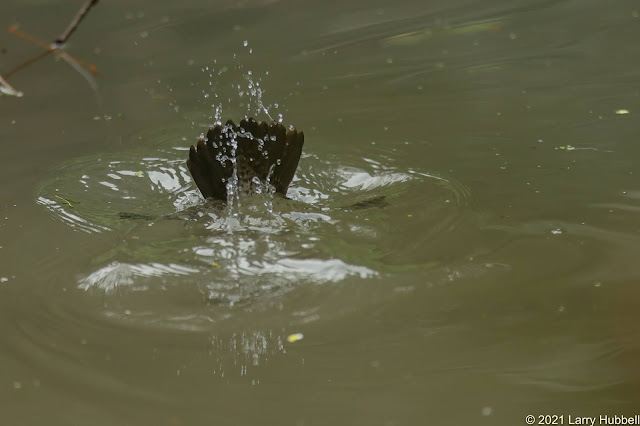 However, it is interesting to see that a split second later the feet were even further out from the body. They almost look like wings, apparently helping to stabilize the bird's body from any sideways roll. 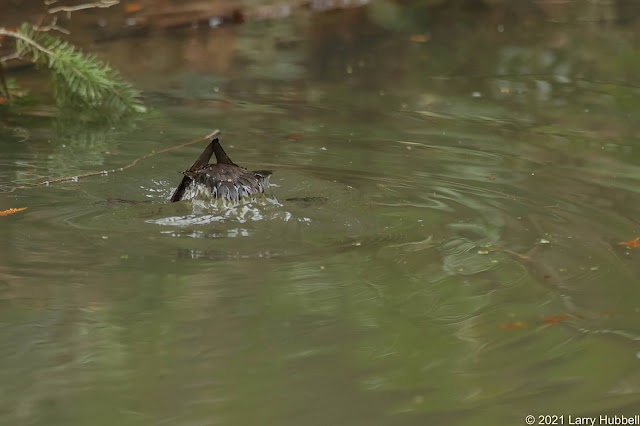 This third photo shows another case where the tail was just leaving the water's surface, a few milliseconds into the dive, and here too the feet were fully extended on both sides. Also, the water appears undisturbed above and behind the feet. This made me doubt that the feet were involved in powering these particular dives. 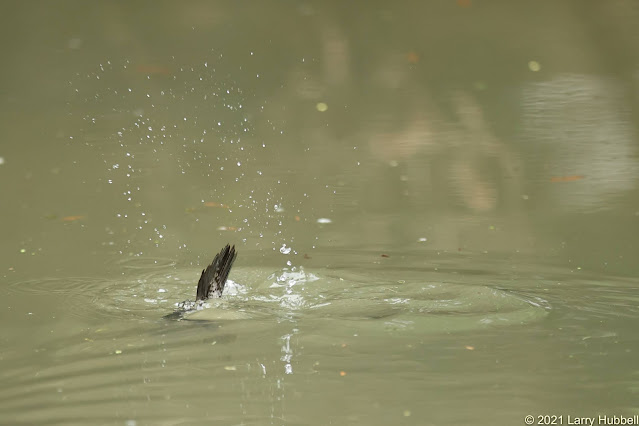 However, given the multiple depressions in the water surfaces behind her, in this photo, she probably used her feet to facilitate this dive. The extra speed may have helped her tail flip water droplets so high in the air. 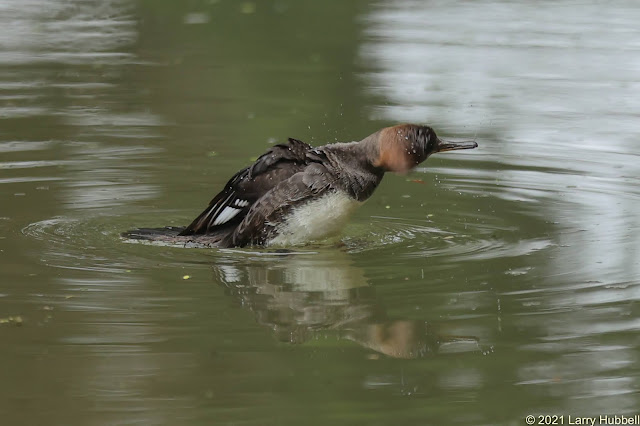 In these next few photos, we leave the obscure underwater mysteries behind. Here she lifted her body above the surface while shaking off excess water. Was she was preparing to fly?
This also demonstrated that earlier she could have done a higher dive if she had wanted. 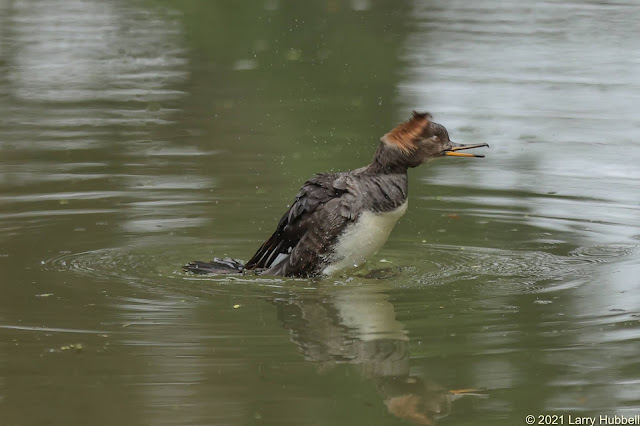 It is surprising how flexible and insubstantial her crest must be, to produce a combed-over look like this. 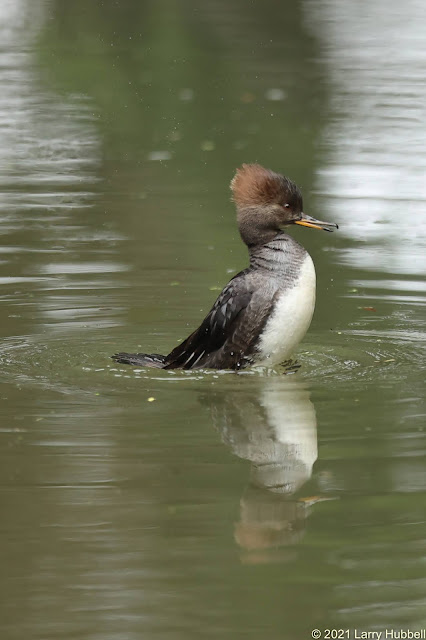 The countershading between her back and belly is striking. 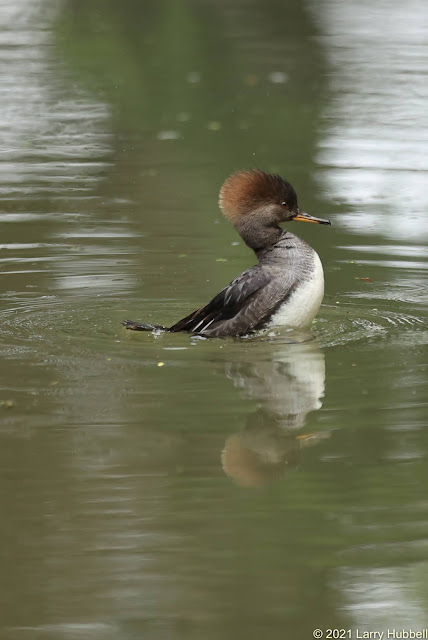 The way she had moved to the far end of the pond, maximizing her potential runway, also seemed to imply she was getting ready to leave.
By the way, notice the two little stripes of white on her lower back just about the water. 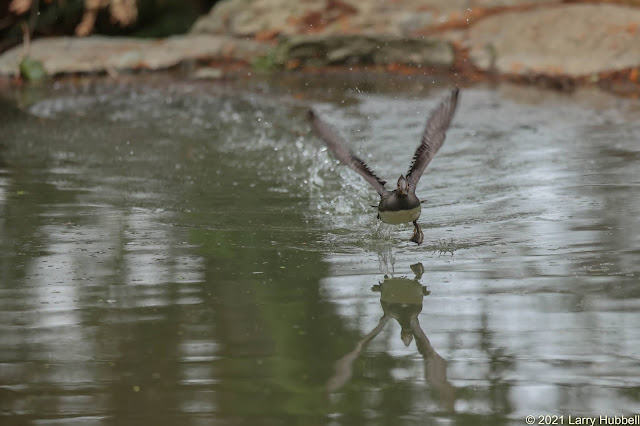 Sure enough, a moment later, after six quick steps across the water, she flew. Initially, coming straight at me, before veering off to her right. As she exited the pond she flew to the southeast. There is only one body of water nearby in that direction - the Broadmoor irrigation pond. 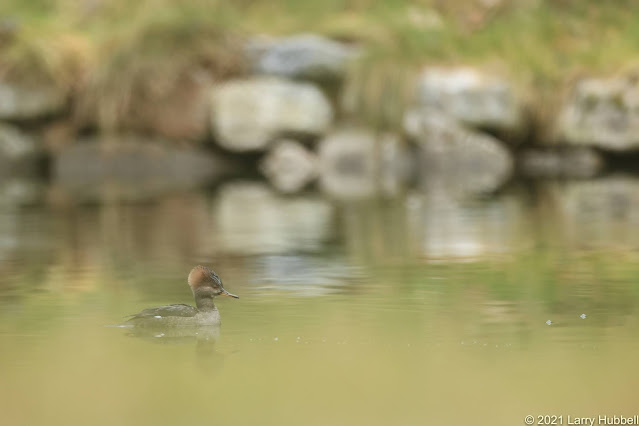 I was planning to head that way anyhow, so I stopped and peered through the fence. There she was.
Flying directly from one pond to the other indicated that she must have known the area. Most likely, she had previously visited both ponds and obviously understood where they were relative to each other.
I suspect she is wintering in and around Union Bay. I have never seen Hooded Mergansers with young in our area. I suspect they nest in more remote and forested wetlands. Although, since they are cavity nesters, they could potentially use some of the Wood Duck nest boxes in our area. Please keep your eyes open for Hooded Mergansers in the Spring.
Have a great day on Union Bay...where nature lives in the city and Black Birders are welcome!
Larry
Going Native:
Without a well-funded Environmental Protection Agency, it falls to each of us to be ever more vigilant in protecting our local environments. Native plants and trees encourage the largest diversity of lifeforms because of their long intertwined history with our local environment and native creatures. I have been told that even the microbes in the soil are native to each local landscape. I hope we can inspire ourselves, our neighbors, and local businesses to respect native flora and to support native wildlife at every opportunity. I have learned that our most logical approach to native trees and plants (in order of priority) should be to:
1) Learn and leave established native flora undisturbed.
2) Remove invasive species and then wait to see if native plants begin to grow without assistance. (If natives plants start on their own, then these plants or trees are likely the most appropriate flora for the habitat.)
3) Scatter seeds from nearby native plants in a similar habitat.
4) If you feel you must add a new plant then select a native plant while considering how the plant fits with the specific habitat and understanding the plant's logical place in the normal succession of native plants.
My intention in my weekly post is to include at least one photo each week and visually challenge us to know the difference between native and non-native lifeforms. 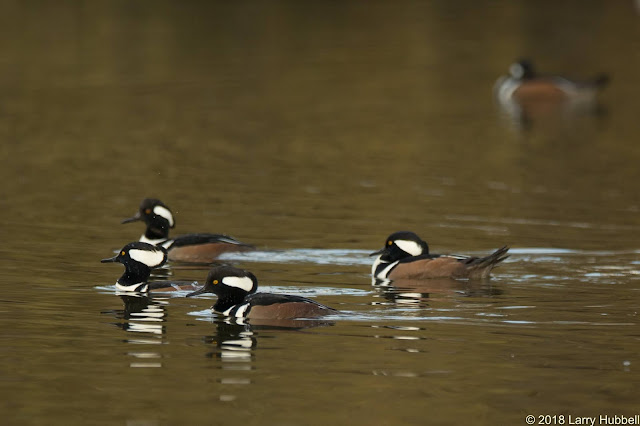 What species of birds are these? Are they native to Union Bay? 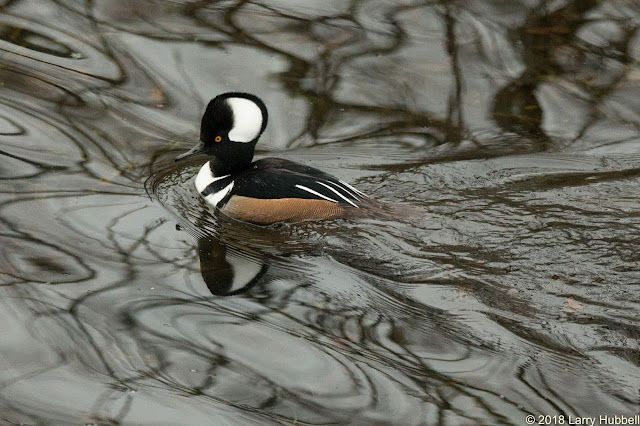 Earlier, white feathers similar to those near the tail of this bird were pointed out. The previously unstated and unanswered question is, Where are those feathers connected to the bird?
If you thought wings, you are correct. But are they primary, secondary, or tertiary feathers? 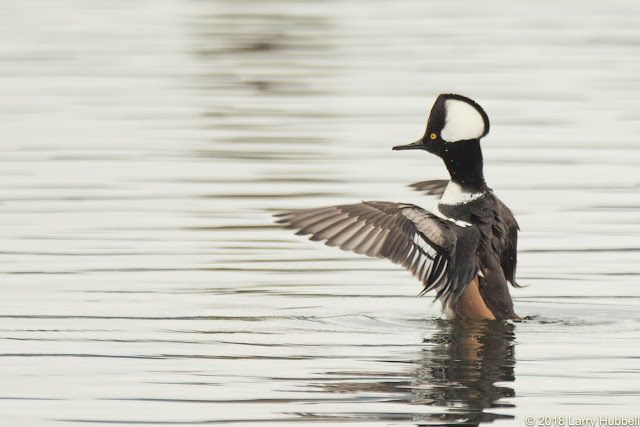 Surprisingly, they are tertials. The first ten feathers, at the end of the wing, are the primaries, the next couple of sets of shorter feathers are secondaries. The four or five, slightly longer, black and white feathers, that are next to the body, but still connected to the inner wing, are the tertials.
***************
The Email Challenge:
Over the years I have had many readers tell me that Google is no longer sending them email announcements regarding my posts. Even more frustrating when they go to 're-sign-up', hoping that will enable them to once again start receiving the announcements, they get a message which says 'Sorry, you are already signed up.' Google has not responded to my requests for help with this issue.
My functional workaround is to set up my own email list and each week I manually send out a new post announcement. If you are experiencing the issue and would like to be added to my personal email list please send me an email requesting to be added. Thank you for your patience!
My email address is: LDHubbell@Comcast.Net
One more photo: 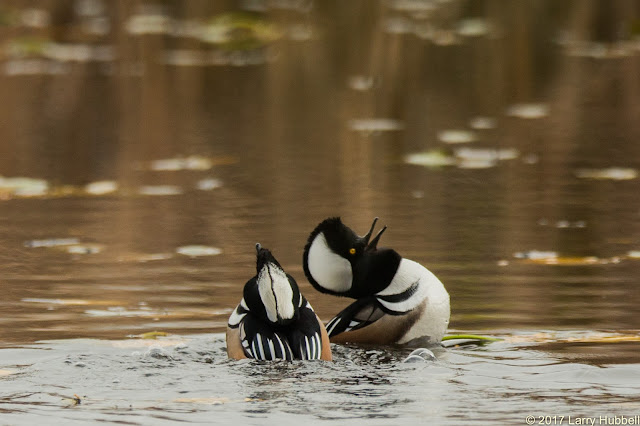 This photo shows males displaying their breeding plumage. It seems like they are more interested in impressing each other than impressing a female. There are more examples in my very first post.
Posted by Larry Hubbell at 1:03 PM