On Tuesday, September the 16th, I was walking along the new Arboretum Trail near Lake Washington Blvd when I heard a very loud, repetitive sound. I glanced at the passing vehicles. Could it be some sort of mechanical failure? The sound was as loud as a water pump when the bearings fail - but more rhythmic, on and off, not the constant nerve-racking squeal of dry bearings.

A moment later the sound caught up with me and passed me by. It was now coming through the treetops near the south side of Union Bay. It was the loudest, longest and most raucous call of a Belted Kingfisher I had ever heard. I couldn't see the bird. My pace quickened. Luckily, I was on my way to the Bay for my last kayaking trip of summer. Hopefully, if I hurried, I might catch up with the full-throated kingfisher and find out what all excitement was about. 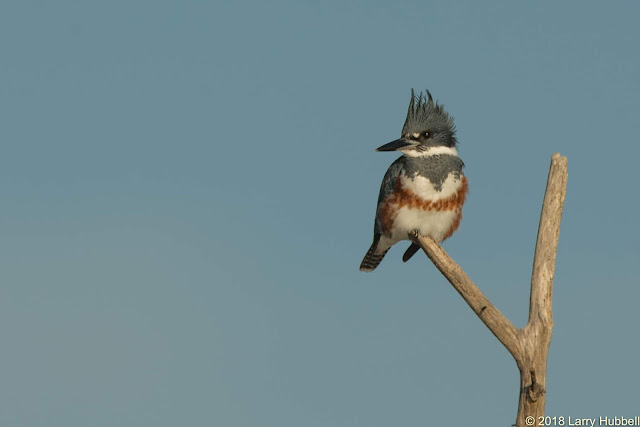 Adult females wear a chestnut belt and are, on average, slightly larger than the males. There can be significant weight variation, so in any particular pair, the male may still be the larger bird. 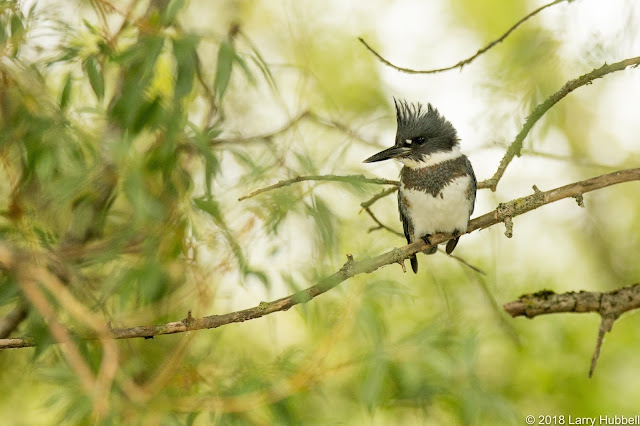 The chestnut belt (or its absence in the males) is the most reliable method to determine the gender of a Belted Kingfisher. This is one of the few instances when the females of an avian species are more colorful than the males. This unique arrangement is called reverse sexual dimorphism. You can learn more about it by Clicking Here. 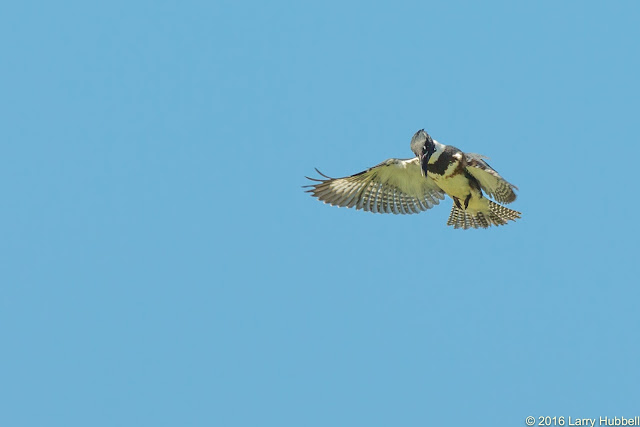 A kingfisher's physical design looks like a mix n' match project. They weigh approximately twice as much as an American Robin and yet they have virtually no legs and little tiny feet. It makes me wonder were is the hummingbird who is missing its feet.

(From a vehicular perspective, a Belted Kingfisher reminds me of a large American-made four-wheel-drive pickup barely balanced on tiny little Mini Cooper wheels.) 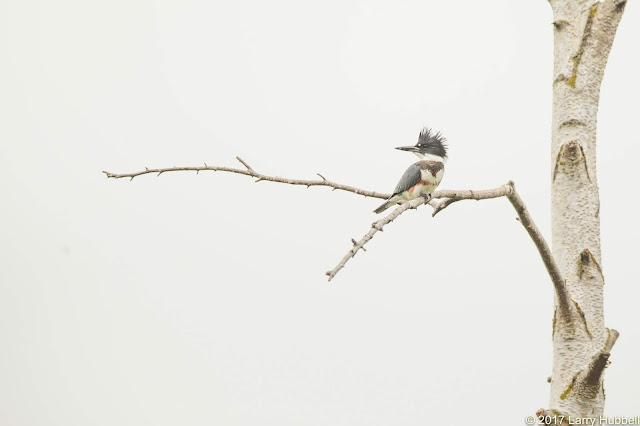 It took longer than I hoped to stow the trailer in my kayak, assemble the paddle, put on the life jacket and pull out my camera. Finally, I was on the water. I paddled around the point and into the backwater around Elderberry Island. I paddled slow and quiet. I assumed any loud noise or flashing of my paddle might flush the kingfisher. At which point, I would simply see tail feathers disappearing in the distance. 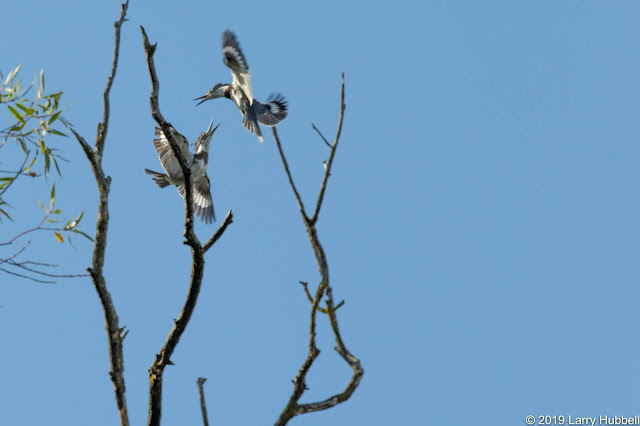 To my surprise, there were two of them and they were completely enamored with each other. I was irrelevant, which is just the way I like it, especially when it comes to bird watching.

Immediately, my mind began racing! Was this a territorial skirmish? Were these two birds of the same gender fighting over fishing rights? Were they two birds of opposite gender expressing a reproductive interest in each other? Were they two young siblings mock fighting? Was it a young bird demanding food from a parent? What was I seeing? 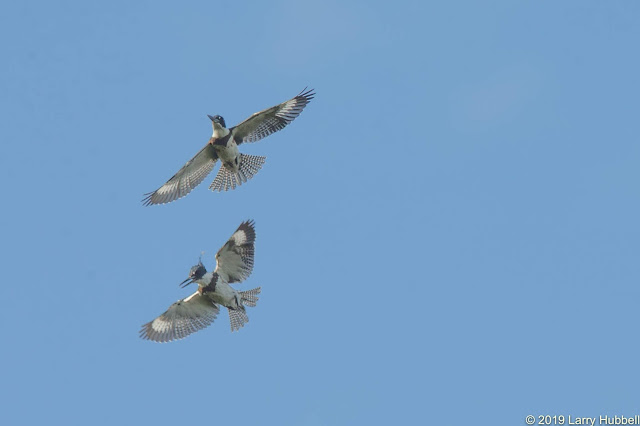 I quietly paddled back and forth, left and right, turning the kayak and trying to watch their behavior between the obscuring branches. For over an hour, I watched as they flew circles above my head. They were both calling loudly, virtually nonstop. The lead bird would land at one of three bare treetops and then the other one would fly up and chase it off its temporary perch. 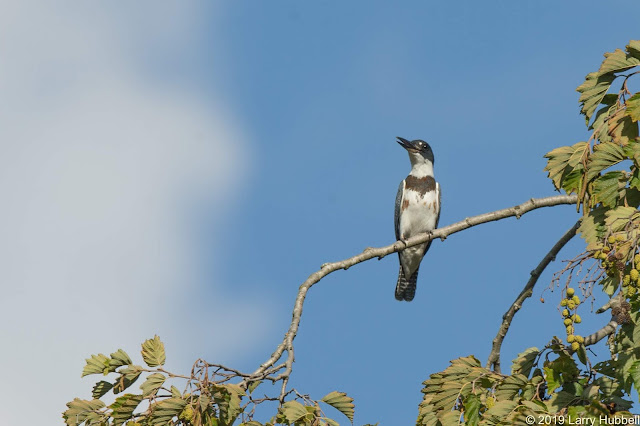 Later, while studying the photos at home, I decided this one was most likely a young female with the beginnings of a chestnut belt and a mix of color in her upper belt which implies a first-year bird. 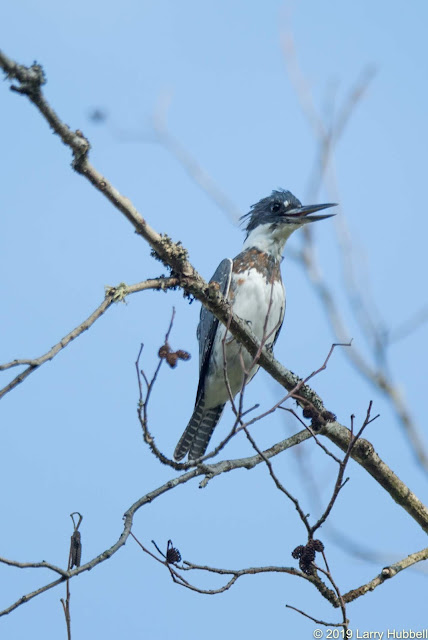 The more scruffy looking of the two also had a mix of rufous and blue feathers in its 'upper' and only belt. This told me it was also a first-year bird but most likely a male since I saw no hint of a lower belt. 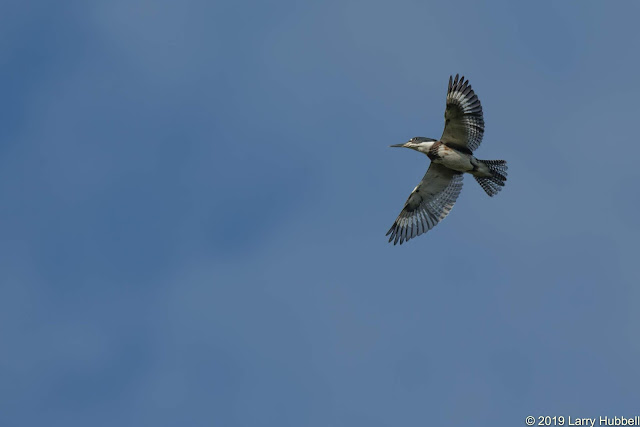 I watched carefully to be certain it was not always the male chasing the female. They definitely took turns pursuing each other. During the whole time, neither bird was quiet or still for more than a minute or so. There was no way this type of behavior could be sustained. What I was seeing was extremely intense behavior. At one point, one of them flew down skimmed about a foot the surface of the water. The other one followed close behind. 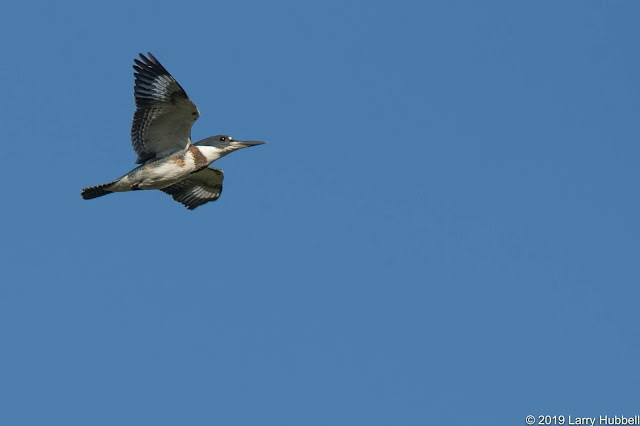 It was hours later when the light went on. I suddenly realized this was most likely a seasonal behavior. As Summer fades away the number of daily light hours declines. In September we reach a point where the length of the day is very similar to early Spring. Specifically, on September 16th we had just over 13 hours of sunlight, which was almost the same day length we experienced on April the 6th.

The theory, as I understand it, is that the length of the day sets off hormones in the birds which initiate the need to breed. Sadly, in the fall it is only a temporary hot flash. As the days continue to grow shorter the urge passes quickly. I suspect that in these two, first-year birds, they were intensely experiencing feelings which they had never felt before. They were literally flying in circles, calling nonstop and clearly unable to concentrate on hunting, eating, grooming or anything else.

Not long ago my friend Wendy reminded me of a poem which speaks to this phenomenon. It  was written by Sharon Stiles in 1973. It is,

"The Autumnal Recrudescence of the Amatory Urge

When the birds are cacophonous in the trees and on the verge,

Of the fields in mid-October when the cold is like a scourge.

It is not delight in winter that makes feathered voices surge,

But autumnal recrudescence of the amatory urge.

When the frost is on the punkin' and when leaf and branch diverge,

Birds with hormones reawakened sing a paean, not a dirge.

What's the reason for their warbling? Why on earth this late-year splurge?

The autumnal recrudescence of the amatory urge."

Have great day on Union Bay...where nature lives in the city! 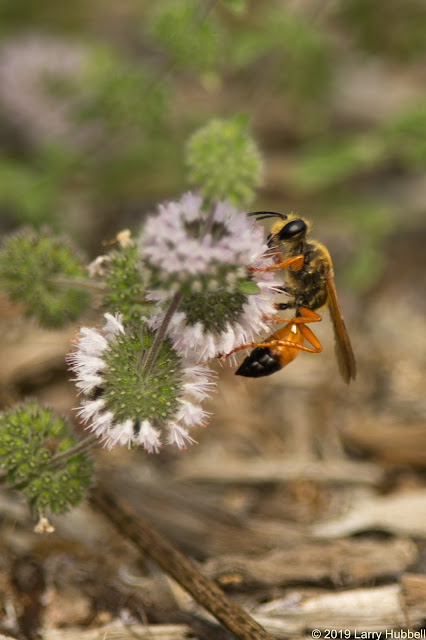 Is this creature, seen in the Union Bay Natural Area, a native?

Great Golden Digger Wasp: According to Merrill A. Peterson's excellent insect reference, 'Pacific Northwest Insects', this species is not native to Western Washington - see page 478. I am very curious what its presence at the Union Bay Natural Area means. Is this creature, which is native to Eastern Washington, just a wild-haired wanderer or does it represent a fundamental shift? Could its presence be related to global warming and a drying trend in Western Washington?

Be sure and click on the golden highlighted link. This wasp is a very interesting little creature.

Nice find! Someone else sent me an observation late last summer from out along the Willapa Bay. I agree with your statements about possible explanations, but there is also another one. My descriptions are based on what's been documented in the literature and citizen portals and specimens in museums. So, rather that being based on complete info regarding distribution, those descriptions are best viewed as "documented from" descriptions. It may be that it's been living in W WA for centuries or longer but that it's scarce enough here that it's not been documented until recently.

Posted by Larry Hubbell at 2:19 PM