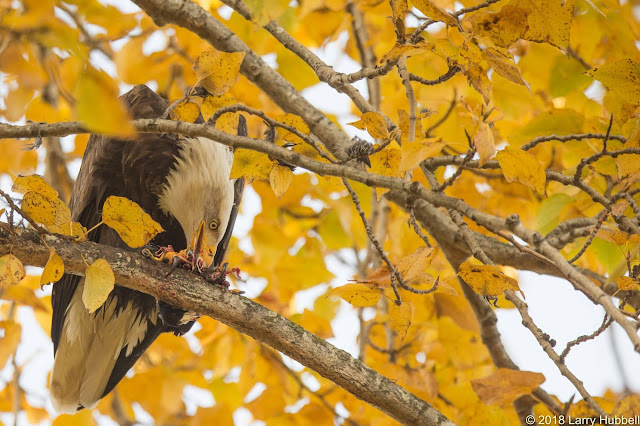 It has been almost a month since I took this series of photos. At the time, I thought showing a bald eagle against the fall cottonwood leaves might make an interesting contrast. I found the yellow of the eagle's bill and feet surprisingly similar to the color of the leaves. Just like the white head and tail, these bright extremities are a sign of maturity.

For the record, this is Marsha, the female Bald Eagle from our local Montlake Cut pair. 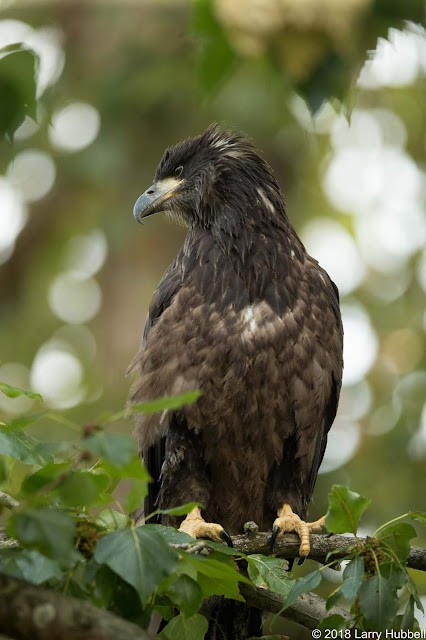 This photo from the end of July shows Lucy, Marsha's second offspring to leave the 2018 nest. Lucy turned out to be too small to be a female Bald Eagle, so we changed her name to Luc. Luc's bill is mostly dark. This is as expected for a young eagle. Previously, I overlooked the paleness of Luc's feet. The difference is especially obvious when compared with Marsha's legs and feet. 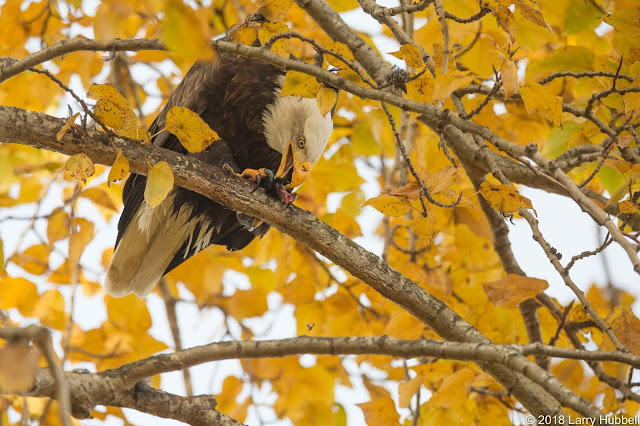 I had suspected Marsha was eating a fish, until the feathers began to fall.

The fact that Marsha was eating initially made me hesitant to publish these photos. Every meal an eagle eats is a life and death struggle, and the process is not always pretty. However, a clear understanding of the relationships between predator and prey is critical if we want to enable a truly flourishing urban ecosystem. 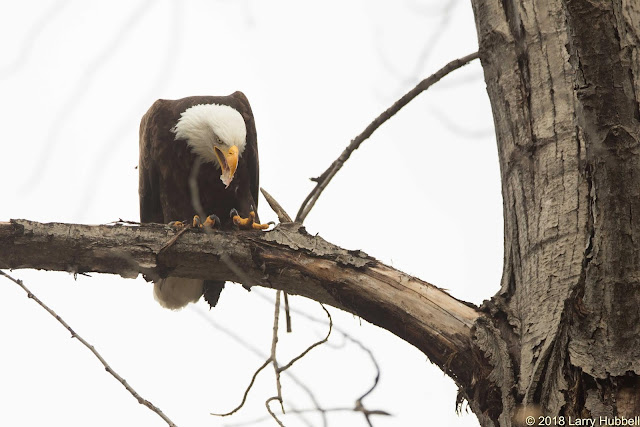 Last March, I caught Marsha eating a fish near Portage Bay. The leafless branch made the process easier to observe, but also less picturesque. 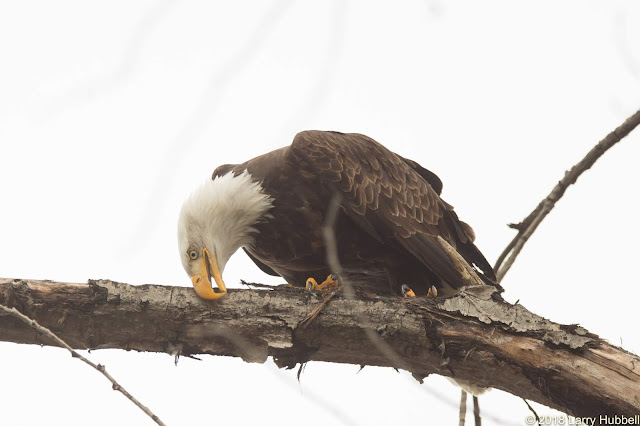 Afterward, she wiped her bill back and forth to clean up. Then she picked a smaller branch off of a tree, and headed back to the Montlake nest site where Luc and his sibling were to be hatched. 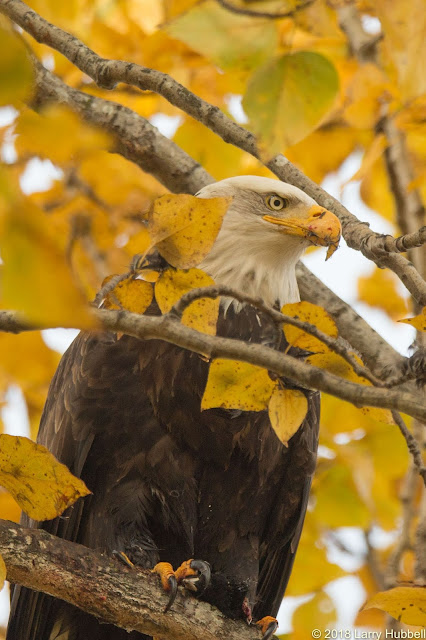 As Marsha neared the end of her meal in the cottonwood tree, a couple of things became obvious. First, she definitely needed to clean her bill again and second, the area behind her eye looked a bit more gray than I remembered. You can see a subtle difference if you compare with the previous photo. 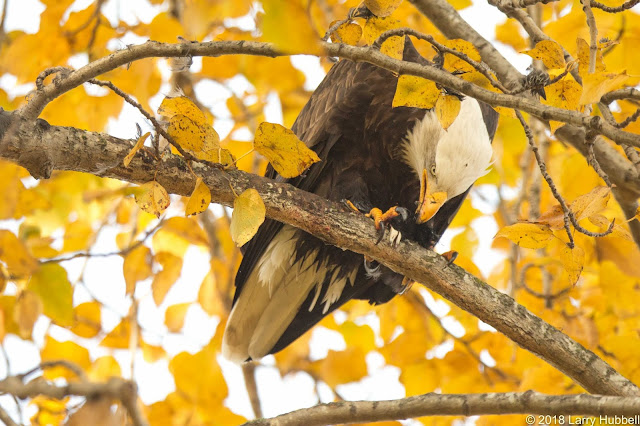 At the time, I was primarily focused on figuring out what species of bird she was eating. It was at this point that I noticed the white bill of the American Coot under Marsha's talon. 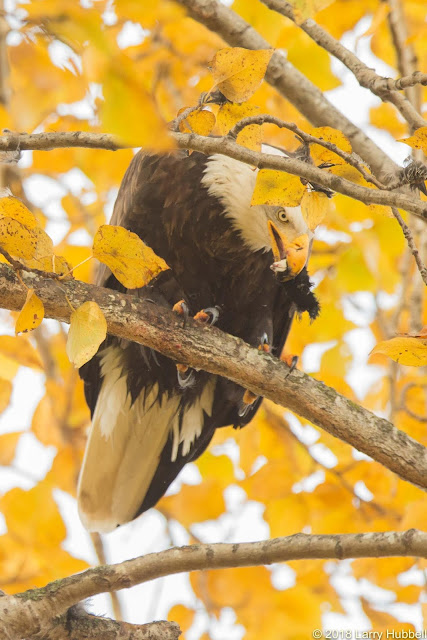 Much to my surprise, Marsha picked up the head and simply swallowed it whole. I would have thought the coot's bill and skull would have been a bit big for her digestive track. Apparently, not. 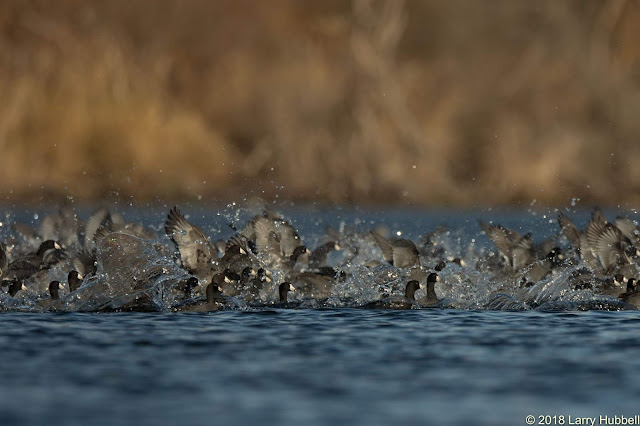 One thing is for sure, we now have a clear understanding of why the American Coots create so much chaos and confusion every time a Bald Eagle passes by. 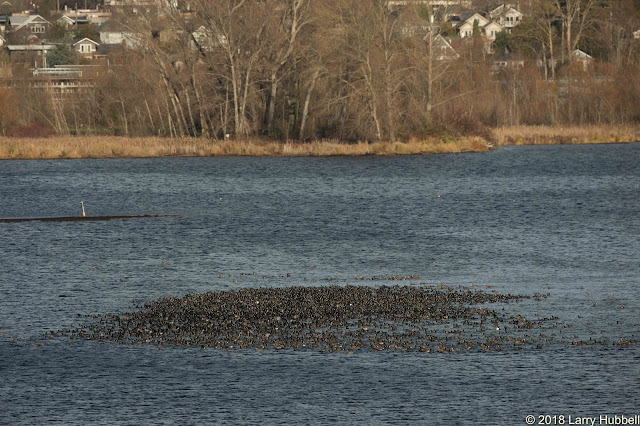 From the eagle's perspective, it is wonderful that thousands of coots winter on Union Bay. From the American Coots point of view, securing the milfoil below the surface must be critical to their survival. Abundant food, even with the risk of being picked off by an eagle must make it worth their while. The Bald Eagles can't eat them all. 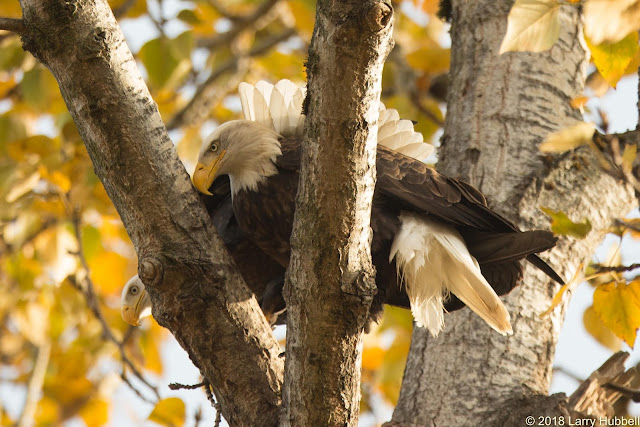 In less than thirty minutes, Marsha was back at the nesting site. Her bill was clean but the side of her head still looked a bit gray. I suspect it is a stain that may eventually wear away. For now, the gray color helps to distinguish Marsha from her mate Monty. By the way, did you notice that Monty's head is peering out from behind the branch in front of Marsha?

If you would like a bird identification challenge do not miss the Going Native section below.

If you want a visual challenge, zoom in and see if you can find the coot's head in the very first photo in this post. Personally, I did not notice it until long after the fact. 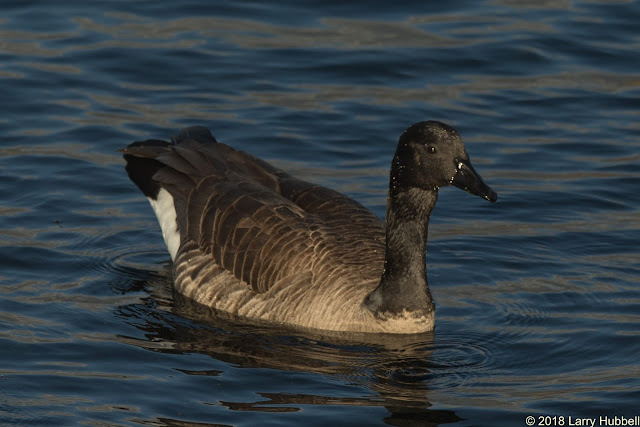 What species of bird is this? 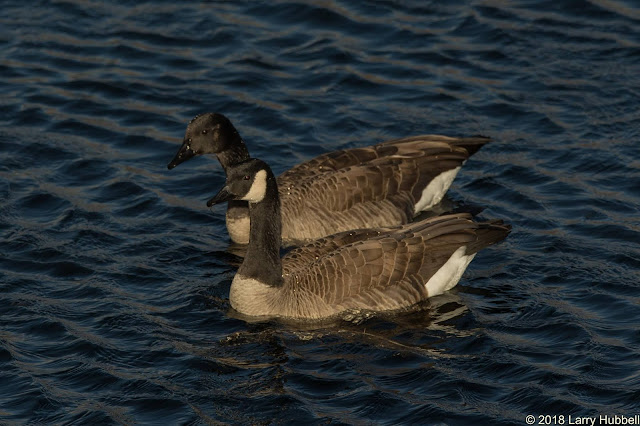 The bird in the previous picture, and both in this photo, are Canada Geese. A friend of mine pointed out this unique goose and named it, Blackie.The reason for the name is because this bird is missing the white 'saddle' that is normally found on the cheeks and under the chin. This bird has been seen regularly in the Marsh Island neighborhood. I hope that one day it reproduces and passes on its unique genetic code.

Posted by Larry Hubbell at 2:39 PM