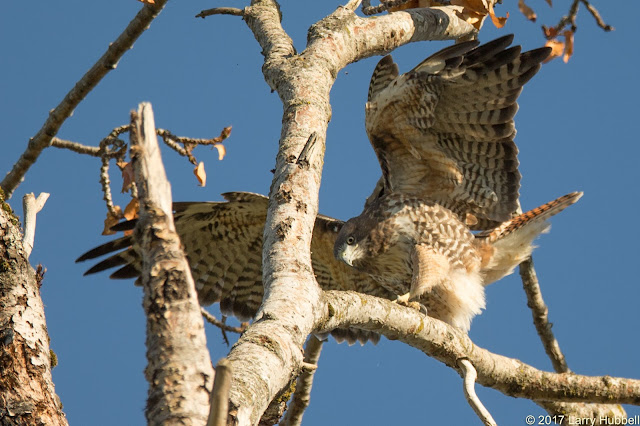 The raucous calls of crows always gets my attention. My heart beats faster. I wonder who are the crows hassling and I immediately move in their direction. I often struggle to find a view through the canopy of leaves.

A squad of excited crows often indicates that they have found a large predatory bird. Topping the list are the eagles but close behind are the owls, osprey, falcons and hawks. This time the crows were harassing a hawk. 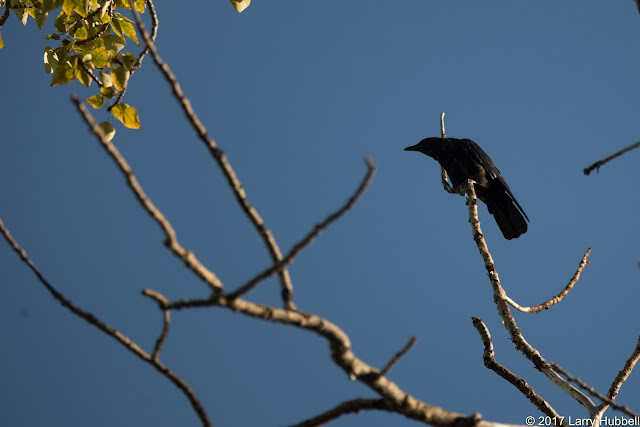 The crows darted and called from the outer branches of the cottonwood, while the hawk twisted and turned among the larger branches. I found the constant cacophony of the crow calls quite stressful. It must have been far worse for the hawk. Every time the hawk looked left a crow would dart in from the right. When the hawk was distracted by a crow crossing its face, another black-feathered menace would swoop in from behind. 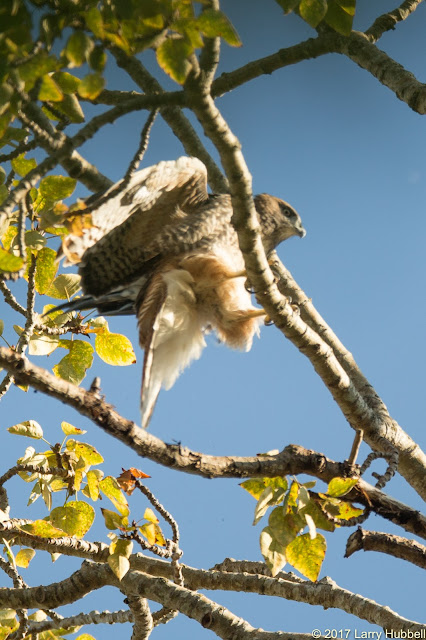 Obviously frustrated, the buteo bounded from one branch to the next. 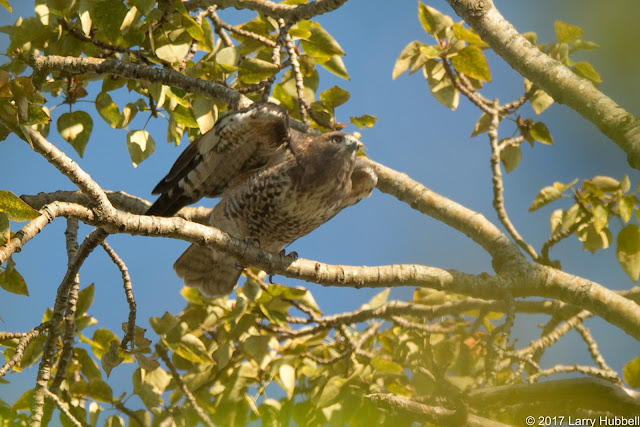 It had hardly a moment to catch its breath. 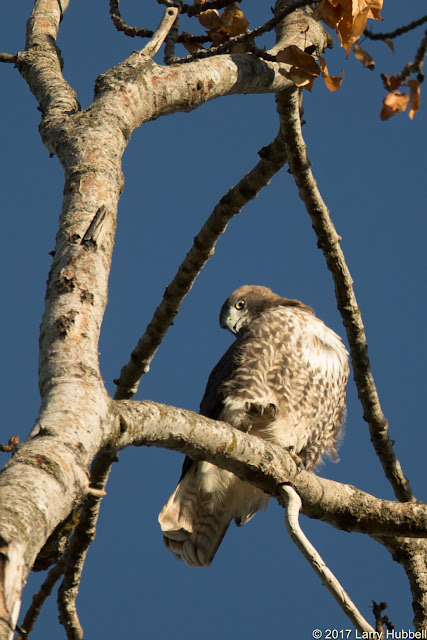 The frustrated predator was much larger than any of the crows, but their numbers and aggressive nature seemed to give them the advantage. 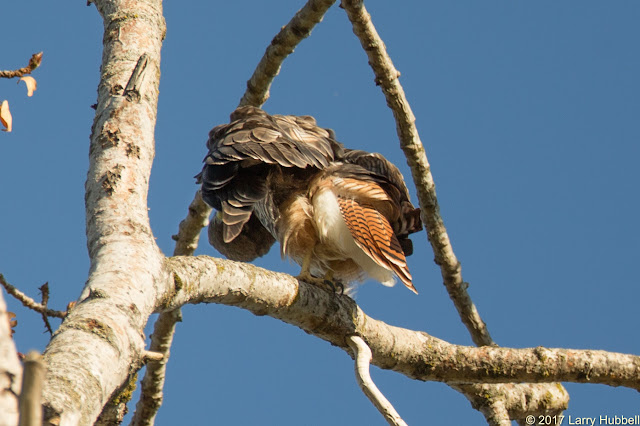 When the nervous bird exposed its flaming-red rectrices it became quite obvious that the object of the crows affection was a red-tailed hawk. 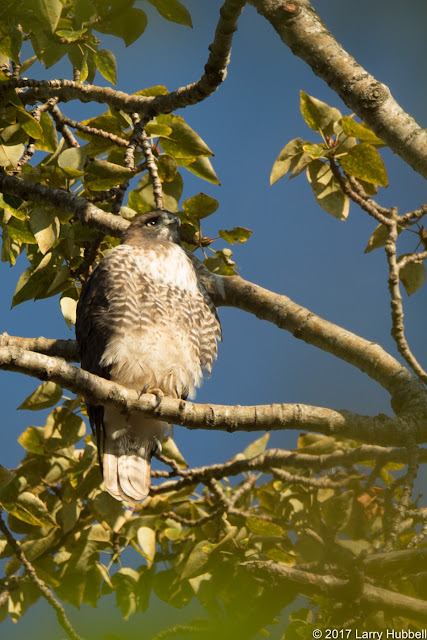 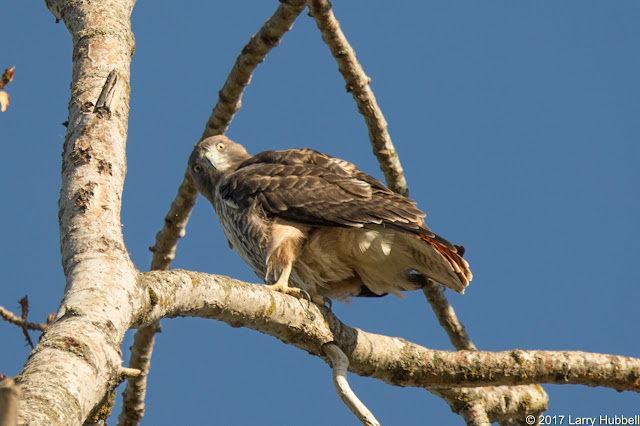 Across North and Central America there are more than a dozen different subspecies of red-tails. In addition it seems like almost every subspecies can also be divided into light and dark morphs. Plus, due to the mixing of subspecies and individual genetic variation, the plumage of red-tailed hawks can vary dramatically.

During his raptor class last year, Bud Anderson described many of the different subspecies and morphs. Bud has a great love for raptors. His knowledge is obviously accumulated from decades of close interactions. I will never forget standing in front of Bud while he held a full-grown red-tailed hawk between us. You can learn more about Bud, his classes and other endeavors by visiting his Falcon Research Group website. The new format and photos are quite delightful. 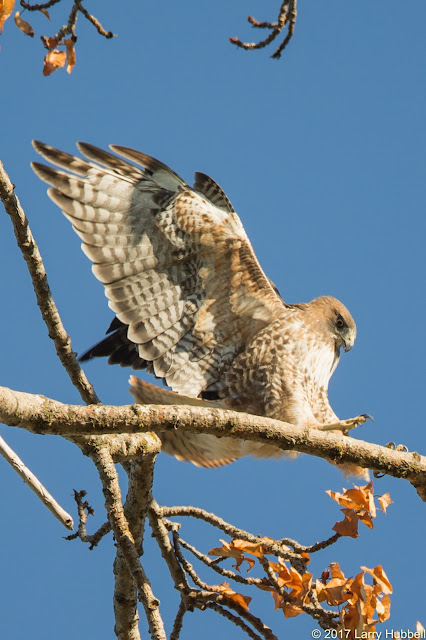 While I was glad the crows led me to the hawk, I was starting to feel a bit sorry for the young bird. 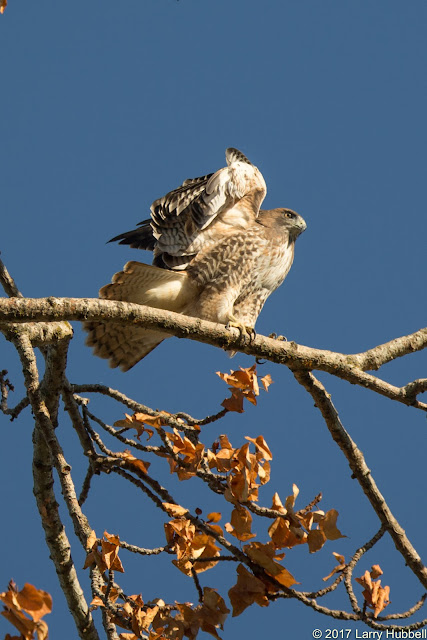 Besides being easily frustrated by the crows, there were other clues to the hawk's relative youth. In this and other photos, you can see the light color of its iris. As red-tailed hawks mature their irises become noticeably darker. 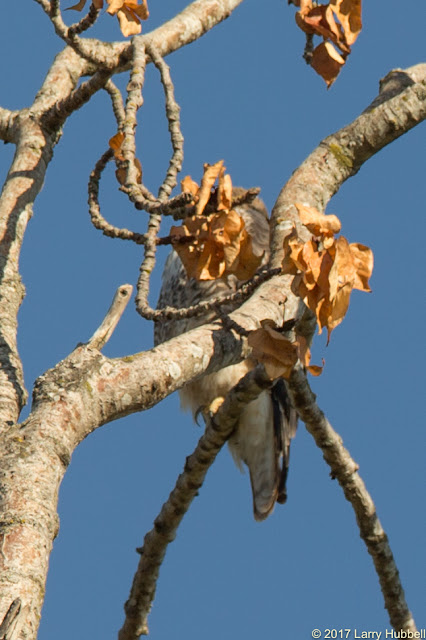 Just when I expected the crows had won and the hawk would soon be gone - the strangest thing happened. It was almost like the hawk looked over its rather impressive physical attributes and realized, I am a hawk. The red-tail found a branch, mostly hidden from me, turned toward the crows and stopped.

I noticed no further movements from the hawk. Soon the crows realized the hawk was done playing games. The noise of the crows incrementally declined as one after the other, each and every crow gave up and flew away. As peace and quiet descended over Duck Bay I was nearly as happy as the hawk. 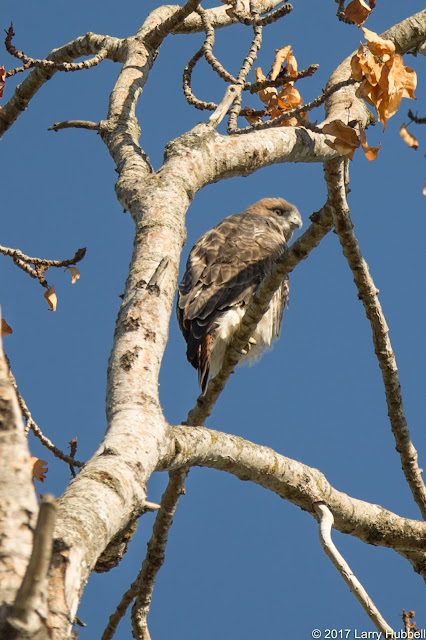 In due time the hawk turned around and looked down at the water, while I found a somewhat better view. Another clue to the youth of the hawk was its exaggerated head movements as it triangulated on potential prey feeding among the lily pads. 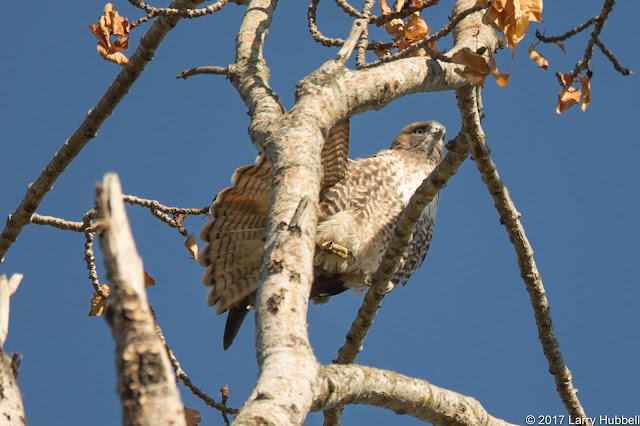 A slightly more subtle sign was the pristine condition of every single feather. 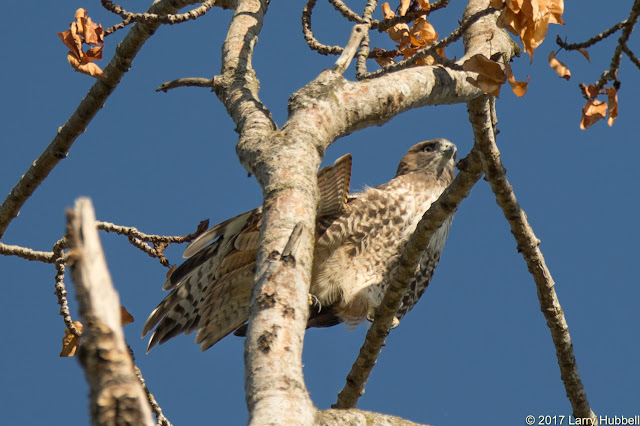 As the hawk stretched and prepared to leave you could see that all the tail feathers were at the same optimal length. If you look back at the first photo you will see that all of the wing feathers are fully grown. There are no signs of any partially-grown feathers coming in to replace a previously molted feather from last year. This means that the hawk's feathers are all brand new, which implies this must be a first year bird.

By the way, in the photo above, some of the tail feathers are being held closer to the head than the right wing, while the tips of the primaries are stretched back beyond the tail. 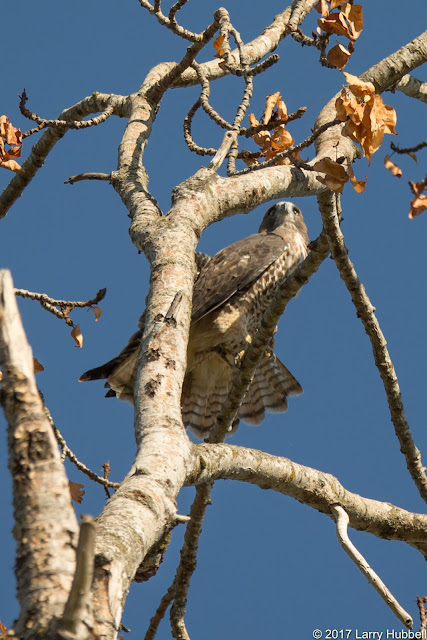 After realigning the right side, the hawk did a similar stretch on the left. 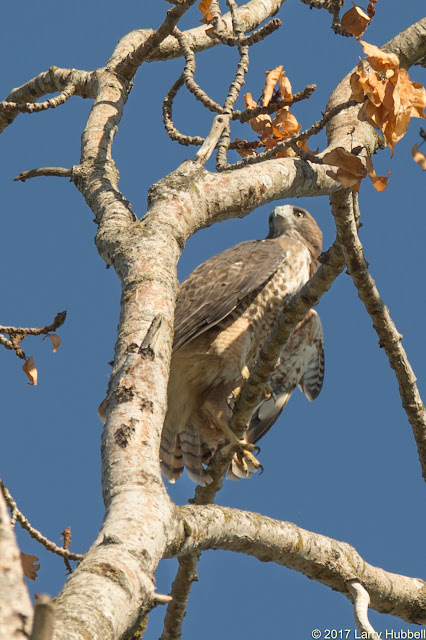 It even extended the left leg down below its perch. 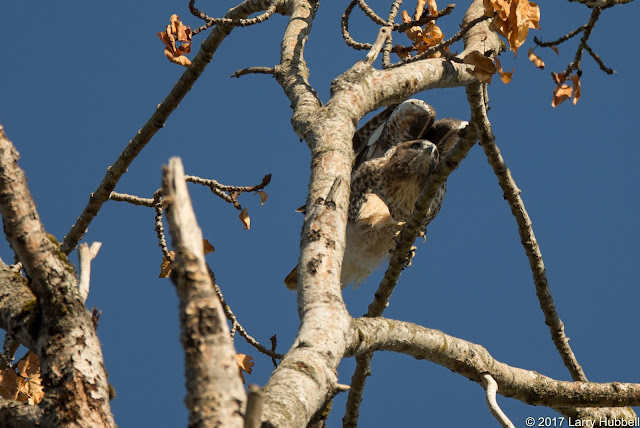 The final and strangest portion of the stretch was extending its folded wings directly above its head. 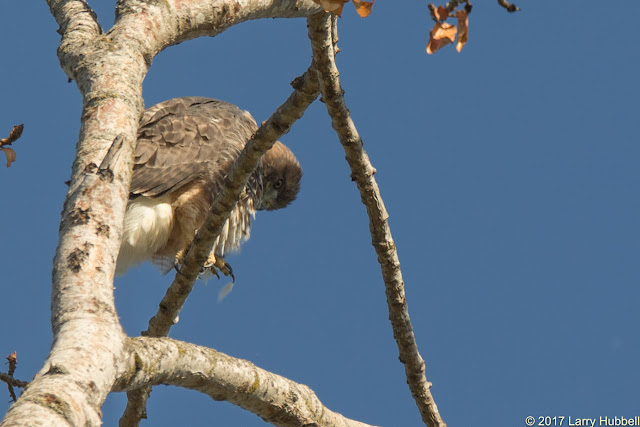 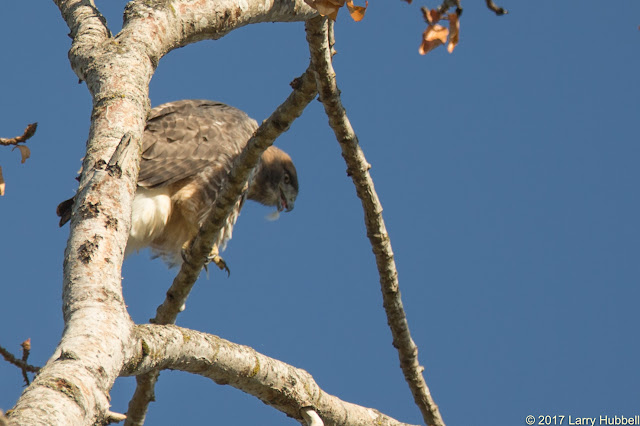 When the feather stuck to its talon, the hawk plucked it off, before silently gliding away.

In the past I have seen many predators harassed by crows. Usually the predator flies away and eventually the crows appear to feel the threat is past and lose interest. Sometimes the predator will simply sit and wait from the crows to get bored and leave. Occasionally, I have seen Cooper's Hawks turn the table and chase after the crows. You can see an example in the post called, The Education of OZ.

However, this was the first time I have seen a bird dramatically change the way it was interacting with crows. It felt like I was watching the young red-tailed hawk grow up - right before my eyes. Sometimes, the best way to discourage a tormentor is to stand firm, look them in the eye and refuse to blink.

Have a great day on Union Bay...where nature lives and learns in the city!

Without a well-funded Environmental Protection Agency, it falls to each of us to be ever more vigilant in protecting our local environments. Native plants and trees encourage the largest diversity of lifeforms because of their long intertwined history with local, native creatures. I have been told that even the microbes in the soil are native to each local landscape. My hope is that we can inspire ourselves, our neighbors and local businesses to plant native flora and to support native wildlife at every opportunity. My intention is to include at least one photo each week and visually challenge us to know the difference between native and non-native lifeforms. All of these turtles were photographed this week in Union Bay. Can you identify the turtles? Are they native to Union Bay? 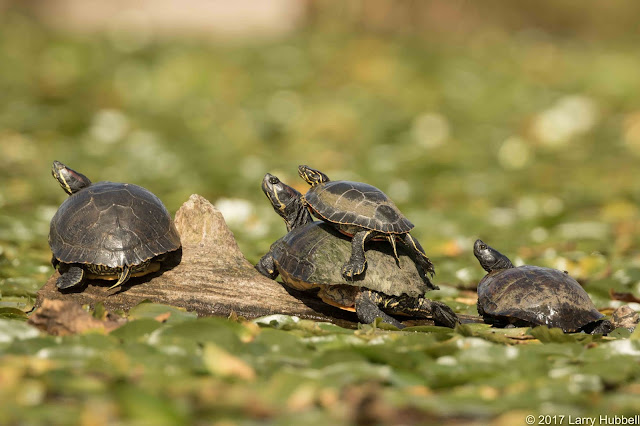 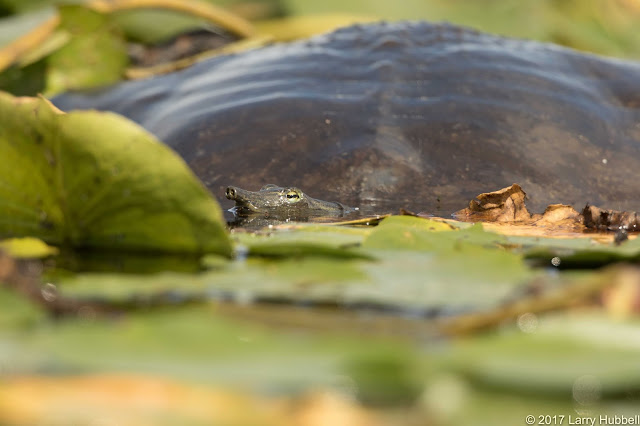 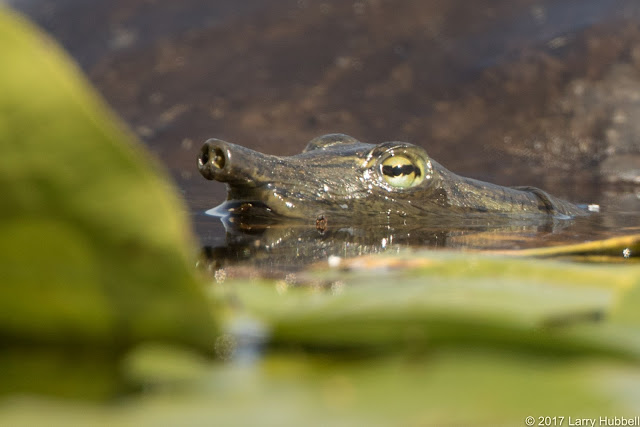 In case you did not notice the head, here is a close up.

I was very happy to find a post by Dennis Paulson titled, Pacific Northwest Turtles, especially since I know very little about the subject.

A) The first two turtles on the left are non-native, Red-eared Sliders. The red markings on their heads are obvious. Even though the other two turtles do not have 'red ears' I am guessing they are also members of the same species. I would be happy to learn about any critical distinguishing features, if you can show that my assumption is incorrect.

B) I believe this turtle is a non-native, Spiny Softshell. It would be wise to remember that Dennis says they can be very aggressive.