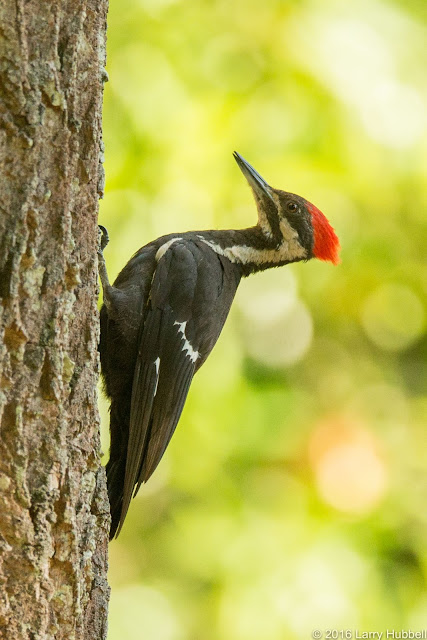 Last July I had no idea that this would be the final time I would see Storm. At that time I was surprised and focused on her arc of white primary feathers. Normally, the white lower third of a pileated woodpecker's wing feathers are covered up by short dark feathers called coverts. Evidently Storm was in the process of molting, e.g. growing new coverts, so the frill of her white 'underwear' was exposed.

If this is the first time you have read my blog you may not know that Storm and her mate Chip have owned their Union Bay territory for a number of years. You may want to read a little about their history. The male who dominated this area prior to Chip was Elvis. If you google any one of their names along with 'UnionBayWatch' you will find hours of photos and reading material. You may also discover that I previously called Elvis' original mate Priscilla. 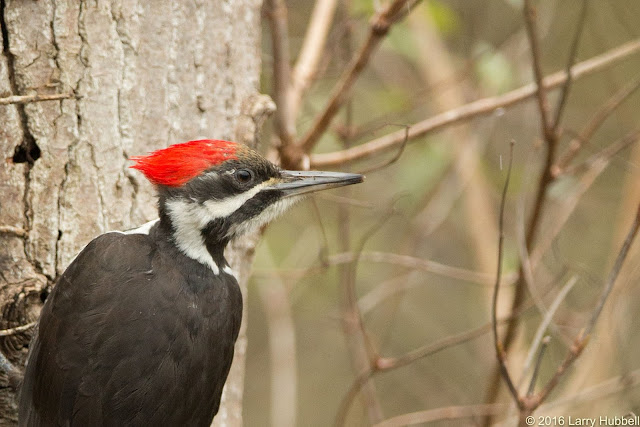 In January of this year I saw this female with Chip near Foster Island. I thought she was Storm - but I had a nagging feeling of uncertainty. At the time I realized that the I could not see the color of her irises due to the position of the sun and the overall lack of light. 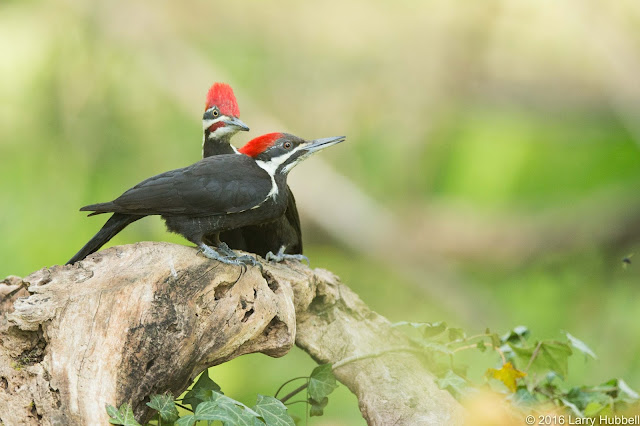 As you can see from this Spring photo (just prior to mating) in 2016 Storm had red irises and Chip has yellow irises. 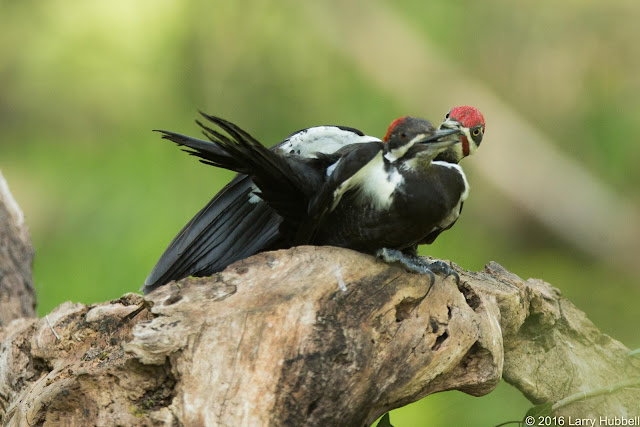 By the way, their mating was successful but in this particular instance Chip lost his balance and it made for a rather humorous dismount. 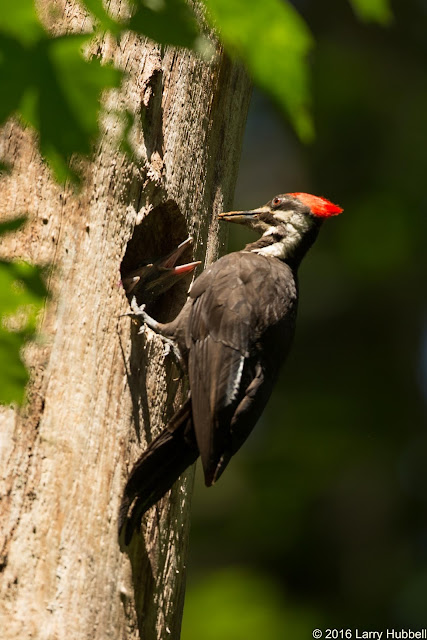 This picture shows Storm feeding the resulting young in the nest later in the Spring. Here the sun is very clearly illuminating one of her red irises. 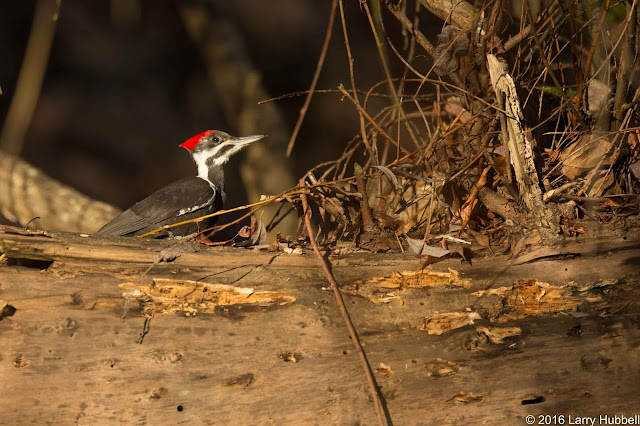 During the last few months I have been watching the new female closely. I have often found her apparently by herself and only occasionally with Chip. In previous winters it seemed to me that Storm and Chip were almost always relatively close together. In any case, by the end of January I had seen Chip's new love well enough to determine her eyes were not red. 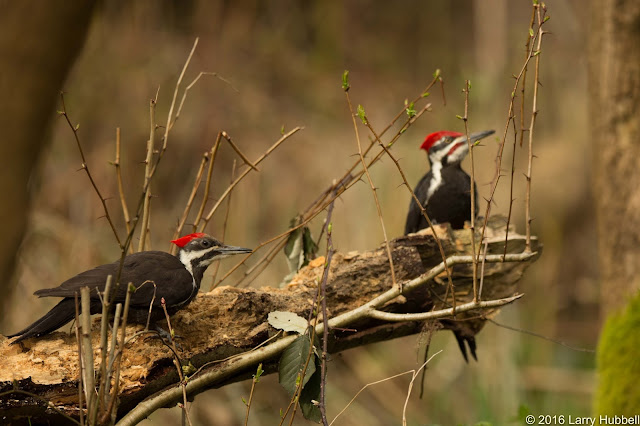 Yesterday, I found them feeding on the same log. While I did not see them mate, I am confident they will attempt to raise young this year. 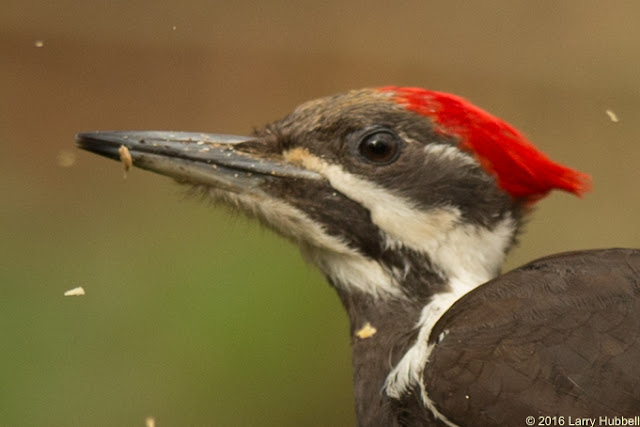 A close look at the female's face confirms what I have been thinking for sometime now. Her irises are brown, not red. This is not Storm. The amount of golden feathers on her forehead is additional proof that this bird is not Storm. I am thinking maybe we should call her, Goldie.

Birds of North America (See citation below) says, 'Iris - Brown in Juveniles and first-year females; brownish yellow in first-year males (B.L. Noel per. comm.); yellow to golden in adult males and some adult females. Not known when iris in female changes to yellow,.' 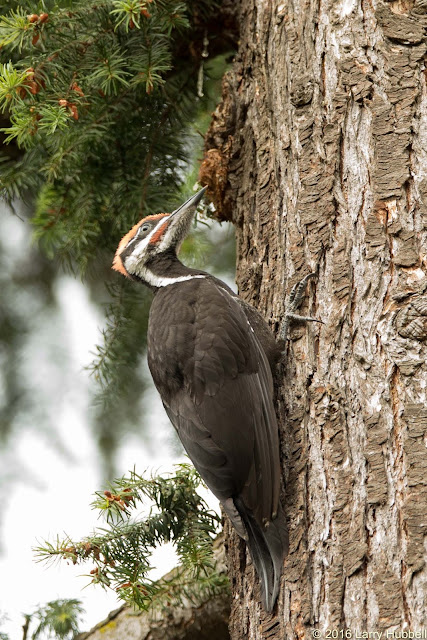 As of June 2016, Squall (Storm and Chip's only male offspring in 2016) still had light blue eyes. I have photos of the young males in both 2015 and 2016 which show light blue-gray irises immediately after fledging - when the sunlight hits the eye at just the right angle. Otherwise, the irises appear rather dark. 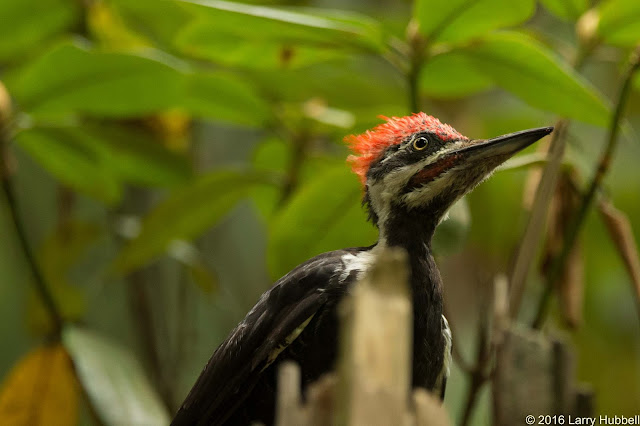 By August of 2016, Squall's irises were yellow, like his father's. Squall did have a darker (possibly brown) portion of the iris circling outside the yellow.

It is the eye colors of females which remain a mystery to me. 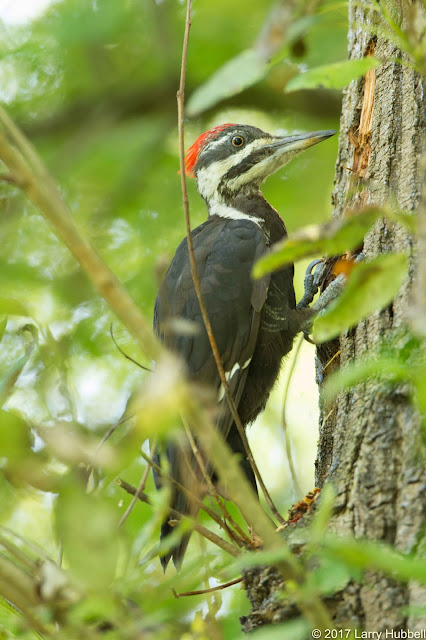 While attempting to learn how long Storm has been around Union Bay I pulled up this old photo, August 11th 2012, of a female on Foster Island. There is no question this is not Storm. The dark eyestripe is too large, the white supercilium just above the eye, is also too thick and the iris is yellow not red. This is most likely the female which I originally called, Priscilla. 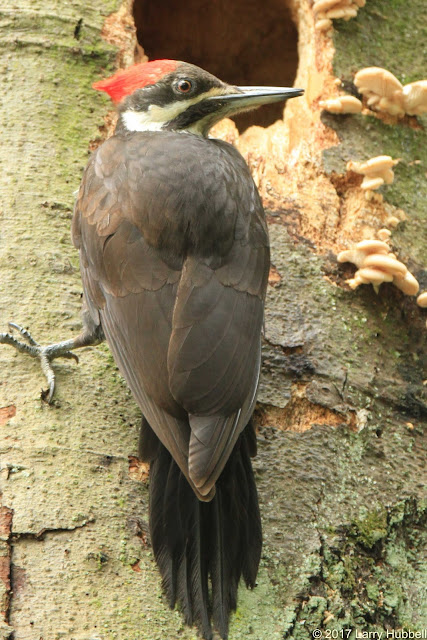 Starting in 2013 the female at the local nest has a much smaller supercilium and a reddish yellow iris. It is interesting to note how dark the tail feathers are compared to the brown of the wings and back. This indicates that the tail feathers are newer and have not been exposed to as much sunlight, etc. 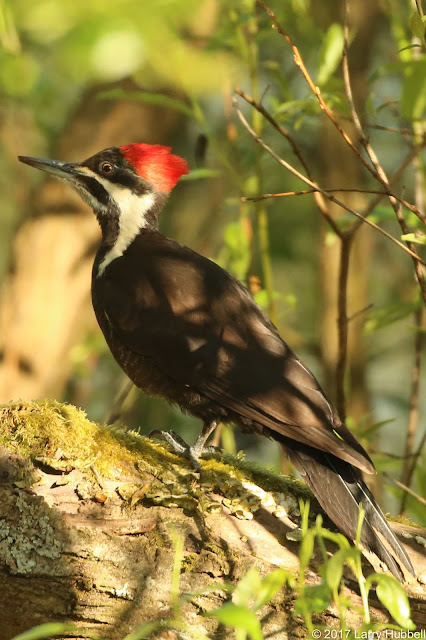 A month later, sitting in the sunlight, the female's iris clearly has a reddish tint and the fine supercilium looks very much like the one we have seen on Storm. I suspect due to inexperience and a lack of careful observation, I missed this early replacement of the female in our local pair. 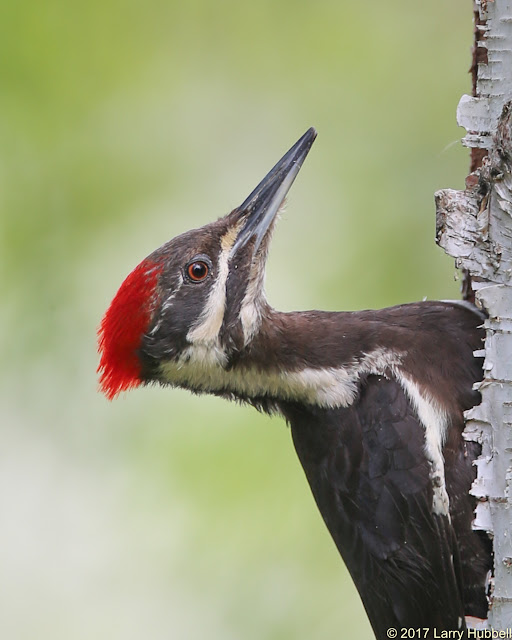 A year later, in May of 2014, the iris is clearly red and the fine supercilium is still present. 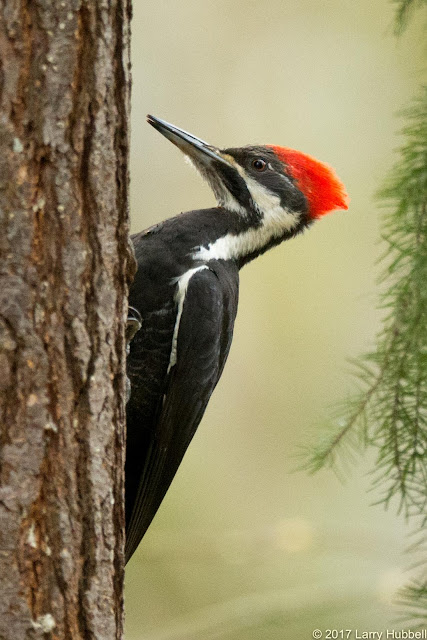 In February of 2015 the iris and supercilium remain consistent. 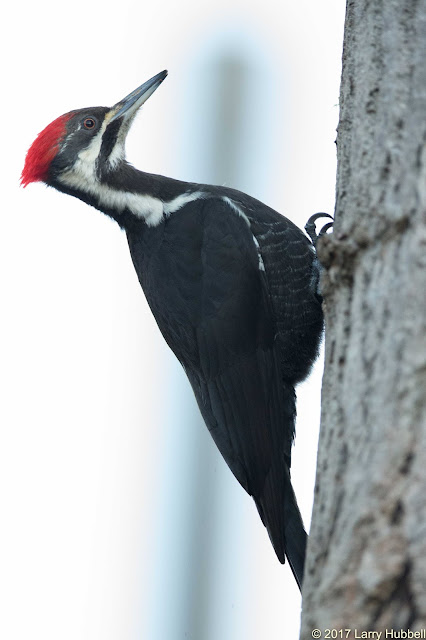 This photo from January of 2016 shows what is obviously the same bird - Storm. This leads to a couple of interesting conclusions.

First, it appears that Storm was our local productive female pileated woodpecker for at least three and possible four years. I will miss her. Over the last four years Storm and her mates have produced the following offspring. 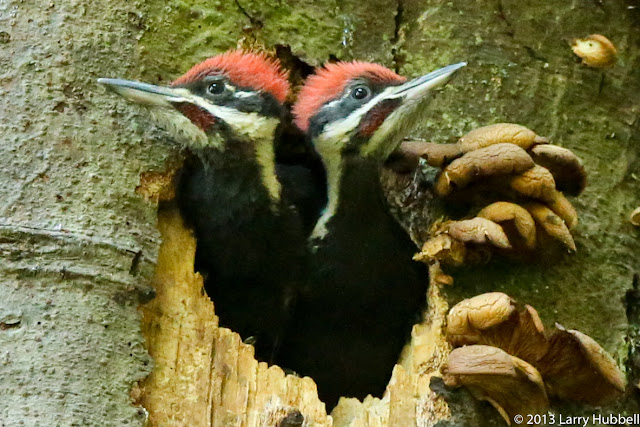 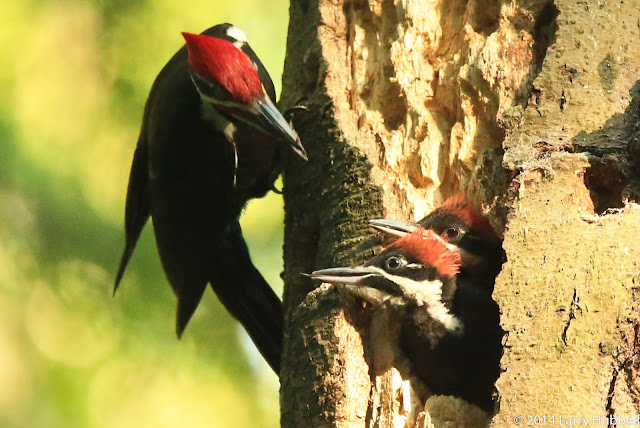 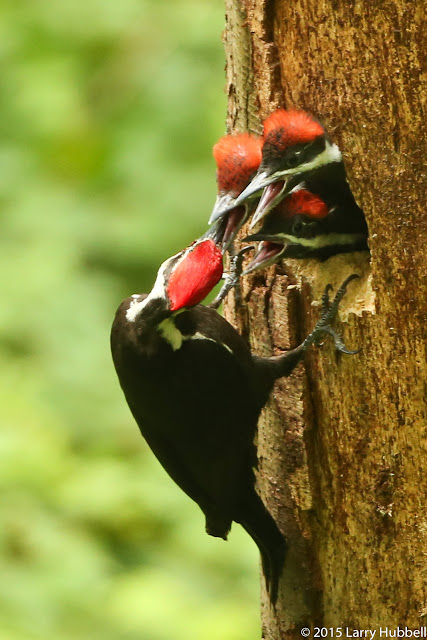 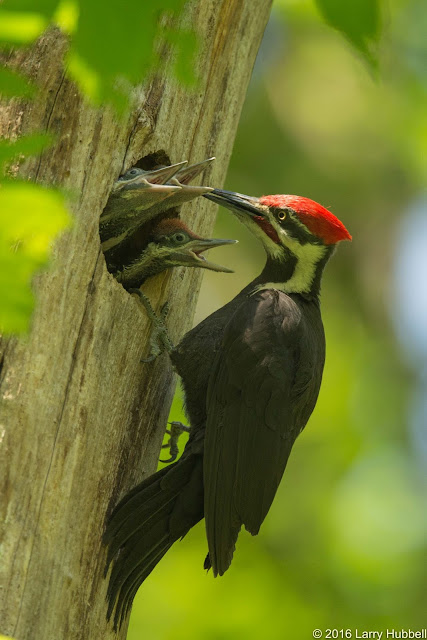 Finally, another group of two females and a male in 2016.

Storm may be gone but she has certainly done her part to pass on her red-eyed genetics.

The other conclusion is that iris colors for mature female pileated woodpeckers can be yellow, red, yellowish-red and in their second year, brown. I can find nothing which explains to my satisfaction the relationships between these colors.

Are there only two different final, mature eye colors?
If so, are they distributed in any consistent geographic fashion?
Is one color more frequent than the other?
Are there different pathways to these mature colors e.g. from grey-blue to yellow and from brown to red?
Is it possible that the irises of some females go through more than two of these colors? These photos make me wonder if a young female's iris could change from grey-blue after hatching, to yellow and then ultimately to red. But then, where does the brown phase fit in? In females might they skip the blue phase and instead go from brown to red to yellow?
Did Storm just not live long enough to reach a yellow-eyed phase?

I would love to gather enough information to try to answer some of these questions. I will be watching Goldie very carefully in hopes of documenting how her eye color changes. I would also love it if my readers would send in photos which show the eye color of female pileated woodpeckers, along with the date and location where each photo was taken. At the very least, it would be interesting to learn if there is any consistent geographic distribution to the eye colors of female pileated woodpeckers.

For me, I almost feel like Storm was a queen. Even though I feel sad at her passing, life keeps moving forward. Love Live, Goldie!

Have a great day on Union Bay...where pileated woodpeckers live in the city!

PS: Thank you for following along on this journey with me. During the last few months, I have been inspired to study the history of our local pileated woodpeckers much more closely. A previous revelation about Chip, in the post A Full Circle, also came from carefully comparing both old and new photos. We are lucky to be the first generation to have digital cameras and personal computing technology.

Without a functional Environmental Protection Agency, it falls to each of us to be ever more vigilant in protecting our local environments. Native plants and trees encourage the largest diversity of lifeforms because of their long intertwined history with local, native creatures. I have been told that even the microbes in the soil are native to each local landscape. My hope is that we can inspire ourselves, our neighbors and local businesses to plant native flora and to support native wildlife at every opportunity. My intention is to include at least one photo each week and visually challenge us to know the difference between native and non-native lifeforms.

Is this flowering plant native to the forests of Union Bay? Bonus Points - if you can also identify the plant providing the out-of-focus green leaves on the left. 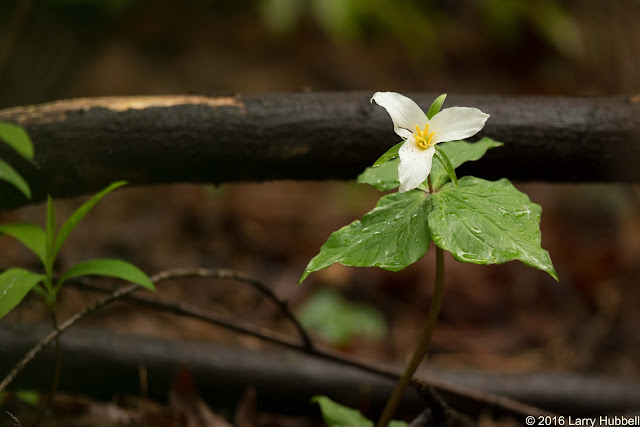 Species highlighted in green are native to Union Bay.

This week, Roy Farrow, Horticulturist, in the Washington Park Arboretum was kind enough to explain some of the history related to the Arboretum trillium. Roy said that a few years ago a gentleman asked if he could donate trillium to the Arboretum. Since they are a beautiful, native flower everyone was happy with the idea. However, the gentleman had one requirement related to his donation. He wanted to be able to plant them himself. As a result, the trillium are scattered throughout the collections in many surprising and undocumented locations. Currently, they are blooming and if you would like a challenge you should walk the forested trails and see how many different trillium locations you can find. Good Luck!

The leaves on the left belong to Indian Plum.

Posted by Larry Hubbell at 3:27 PM