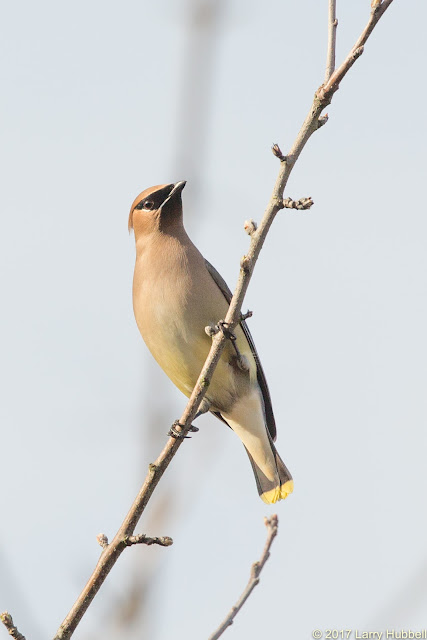 It is hard to imagine a more elegantly colored and aerodynamically designed bird than a cedar waxwing. The colors of the body fade from light brown to tan to yellow without a hint of demarcation. There are only three areas with dramatic color shifts and in each spot the contrasting color is used sparingly. The small black mask makes their eyes difficult to define, the yellow tail tip fades from sight in brilliant sunlight and... 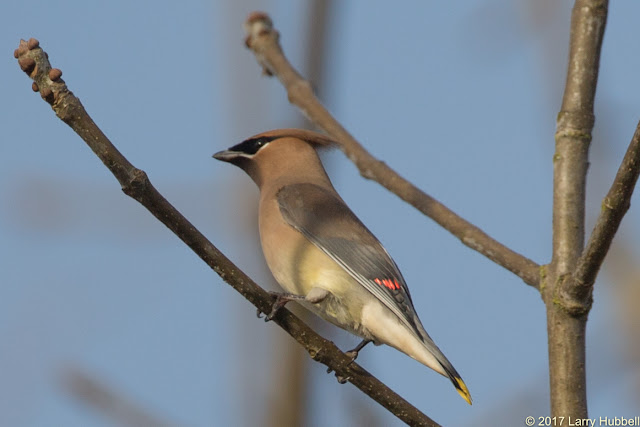 ...even their small ruby red wing tips are tucked out of sight behind a sitting bird. Curiously, no one has discovered how this species utilizes these waxy little nodes. If the flaming fixtures did not have value, surely evolution would have done away with them by now. Perhaps the next great ornithologist will prove their talent by deducing the value of this mystifying investment. 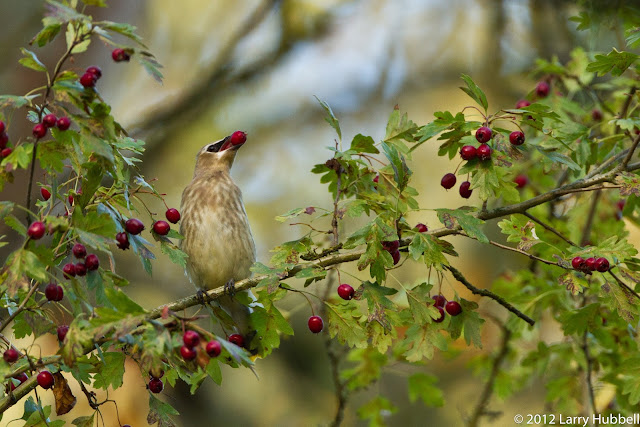 If your only source of birding knowledge happened to be my blog, you would have concluded that cedar waxwings love fruit. In November of 2012, we saw this first year bird (with its age defined by the stripes on its chest) eating red hawthorne berries on Foster Island. 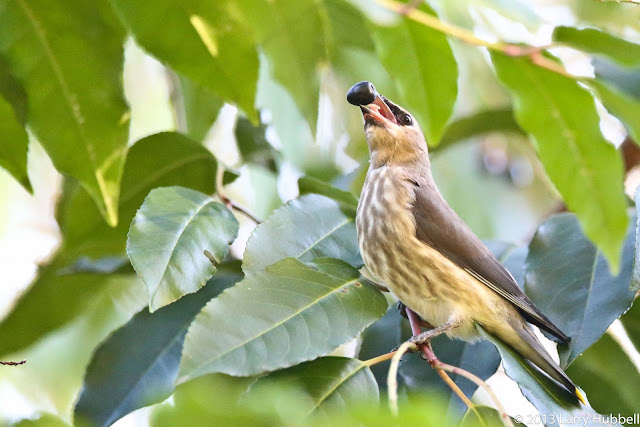 In October of 2013, we saw another young bird eating the dark berries of a laurel bush in the Beaver Lodge Sanctuary. 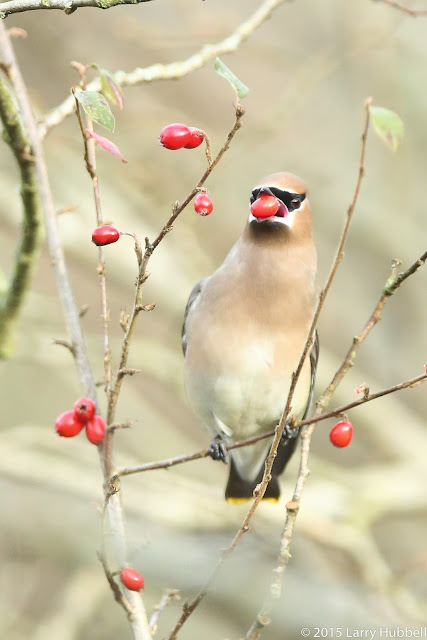 In January of 2015, we saw a mature waxwing eating red fruit from a nearly leafless little bush by the Montlake Cut. 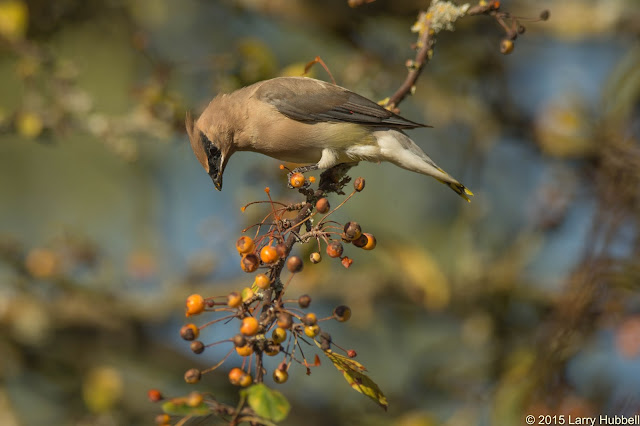 In October of 2015, we saw another adult debating the idea of old orange fruit between to the University Slough, which I suspect was once the mouth of Ravenna Creek, and the parking lot on the west side of the Union Bay Natural Area (UBNA). 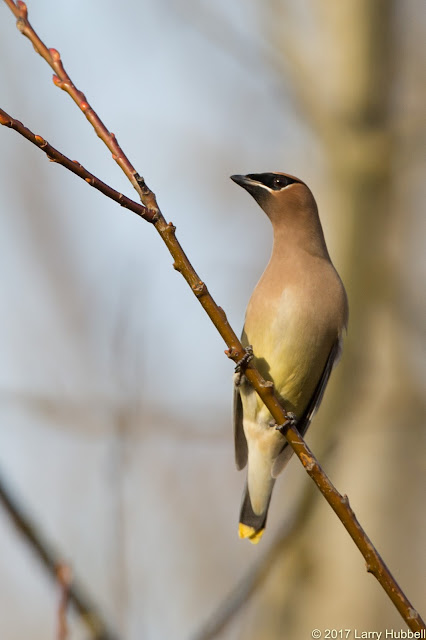 Last week while visiting the UBNA, I found waxwings searching the sky while sitting on the bare, fruitless branches. There was not an ounce of fruit to be seen. 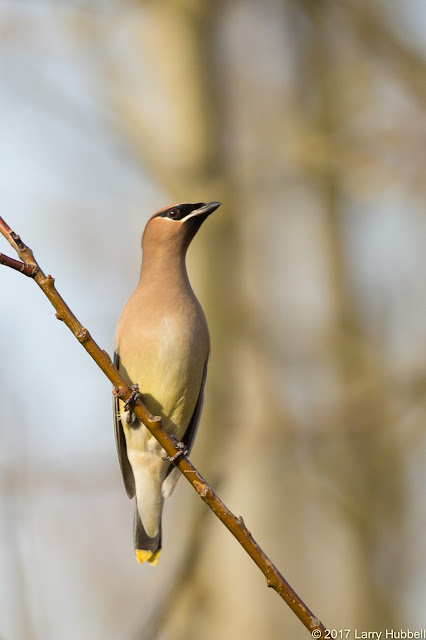 I do not ever recall seeing a waxwing sit so tall or stretching its neck so far. 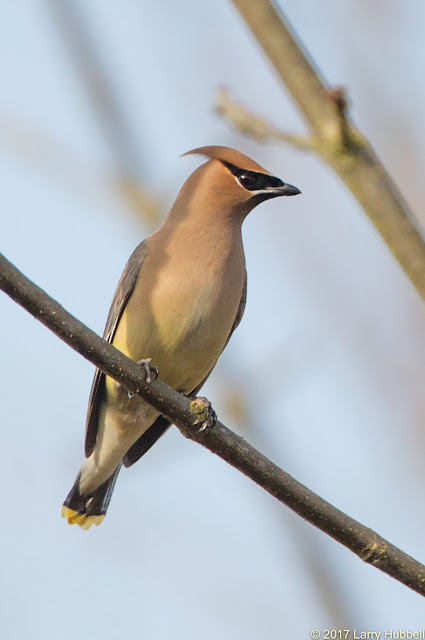 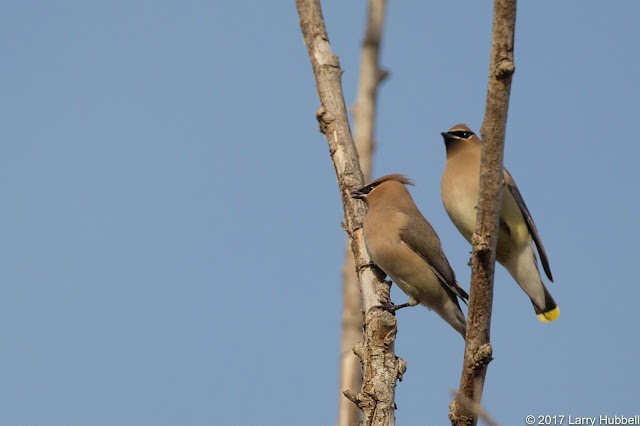 Normally, waxwings are in flocks and often close together when eating in trees or bushes heavily laden with berries. It took me a moment or two to finally realize what the waxwings were doing. They were starting early in their search for summer supplements. 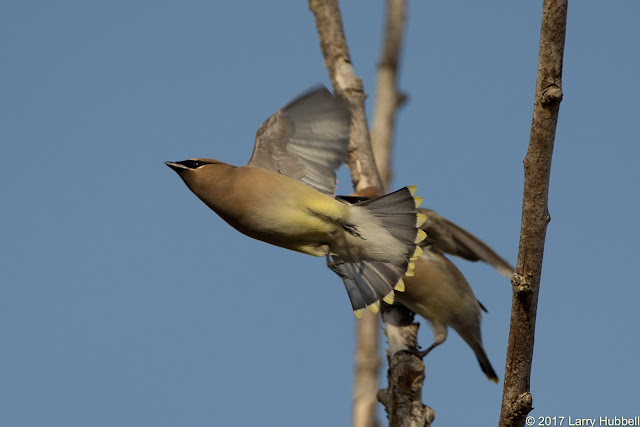 The waxwings were leaping off the bare branches and catching insects in mid-air. 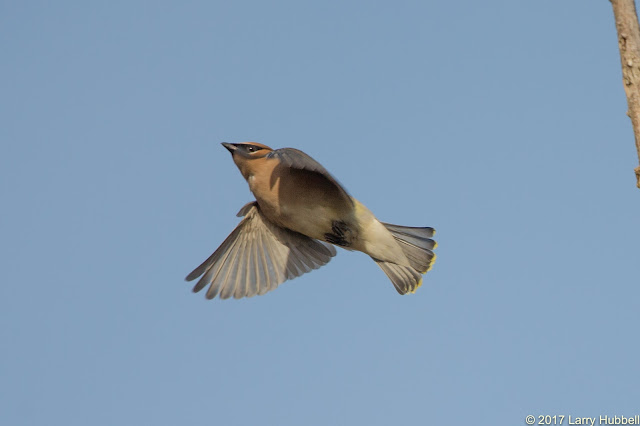 Their darting irregular movements were necessitated by the evasive action of their small flying prey. 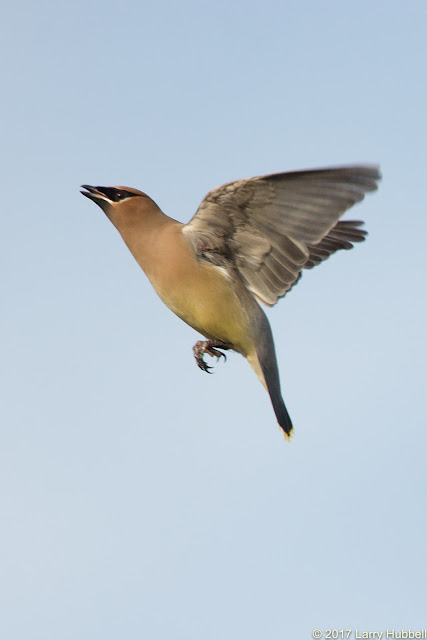 Currently, the phrase 'sally forth' pops into my mind whenever I see a bird leap out of a tree and chase after an insect. Perhaps, Dennis Paulson planted the concept in my mind during our Master Birder Class.

Later in the week, while visiting the Arboretum I had to chuckle as I watched two waxwings leap out of different trees at precisely the same moment. They flew full tilt on a collision course obviously focused on the same insect. At the last moment, they both turned tail and headed back to their respective trees, but not before the northern bird appeared to grab the insect. 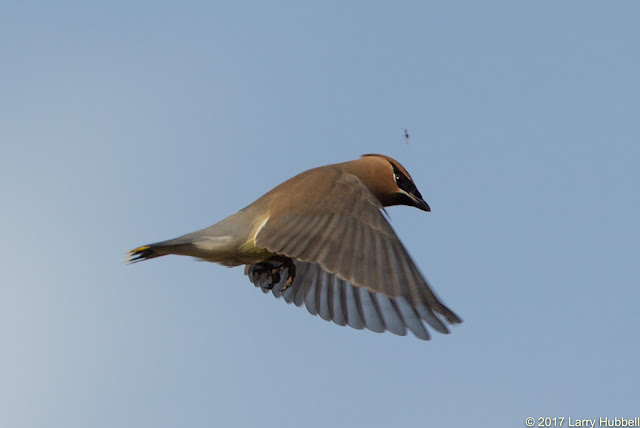 In the Natural Area, this little bug took the unusual strategy of attempting to hide directly above the waxwing's head. I believe the survival of the fittest concept came into play and this little bug was soon removed from the gene pool. The grove of young trees that the waxwings were using is immediately east of the new 'parking' pond. The pond seems to be in need of an appropriate name. 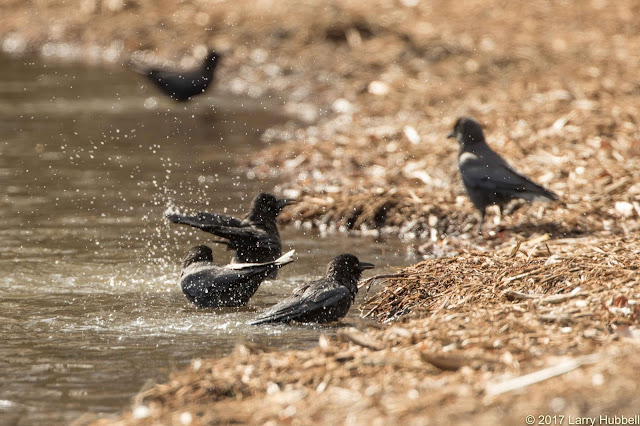 As part of the 520 mitigation, the west-side parking lot in the UBNA has been converted into a pond. Over the winter I watched the process of construction. I believe the water must be about three feet deep. So far I see no signs of vegetation. The first birds I saw in the water were three northern shovelers. They paddled about in tight little circles, scooping up minuscule bits of floating food. The second species of birds utilizing the pond are the crows. A rotating crew seems to be spending all day every day bathing in the fresh rain water. If this keeps up the default name may become Crow Pond.

I do wonder what will happen in a few weeks when the osprey return. The osprey nesting platform is just slightly to the south. Will the osprey chase the crows out of their nesting territory or will the mob of a hundred crows chase the osprey away? I certainly hope the osprey win this upcoming battle in Seattle. 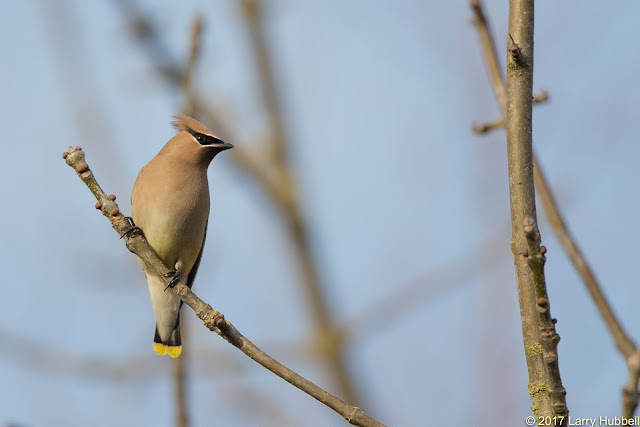 It was only as I was preparing to write this post that I realized the waxwings were indirectly using the pond and possibly the pre-existing wetlands to the east. I suspect the wind was blowing insects off the pond into the bare trees where the waxwings were waiting. Then, when the tiny bugs were close enough, the waxwings would sally forth, fill their mouthes and return to await their next delivery of 'summer' supplements.

Without a functional Environmental Protection Agency, it falls to each of us to be ever more vigilant in protecting our local environments. Native plants and trees encourage the largest diversity of lifeforms because of their long intertwined history with local, native creatures. I have been told that even the microbes in the soil are native to each local landscape. My hope is that we can inspire ourselves, our neighbors and local businesses to plant native flora and to support native wildlife at every opportunity. My intention is to include at least one photo each week and visually challenge us to know the difference between native and non-native lifeforms.

Which of the following plants are native to Union Bay? 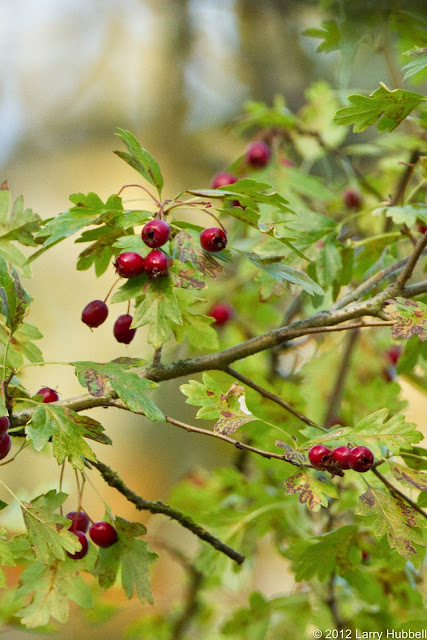 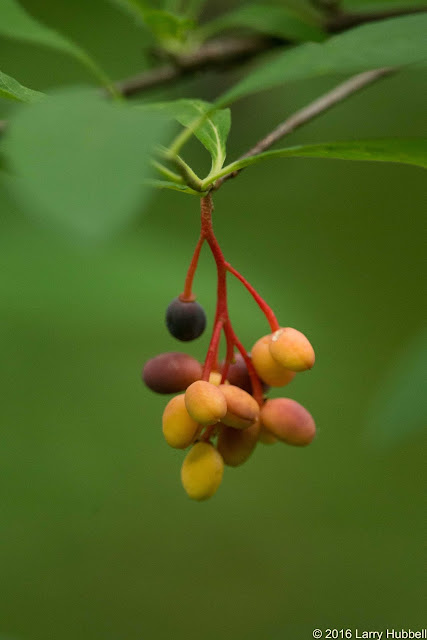 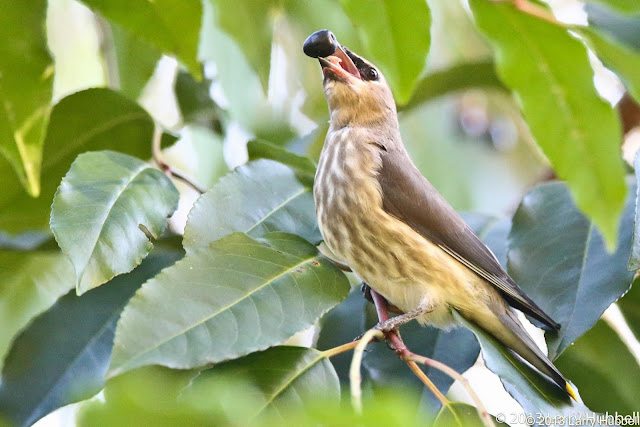 Species highlighted in green are native to Union Bay.

Once again the names give them away. If you follow the red links you will find that in King County the English Hawthorn is considered a noxious weed while the English Laurel is a weed of concern. It is wonderful to see waxwings in the city - however if we furnish these weeds with places to grow then the waxwings will continue to spread the european seeds through out the Pacific Northwest ecosystem.