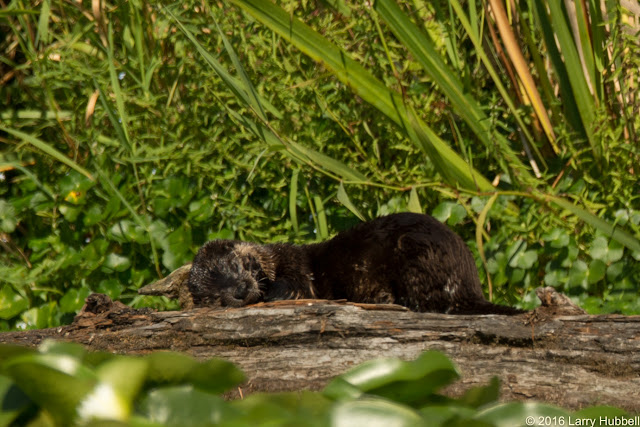 It took a couple of hours for the fog to burn off on Monday morning. I was getting hungry by mid-day. A cool little breeze was blowing across the bay as I lowered my camera to my lap and began paddling for home. As I glanced at the eastern shore of the Union Bay Natural Area, I spotted the dark shape of a mammal. All thoughts of food evaporated.

I know it looks like the river otter was sleeping. Actually, I think it was scratching its head. It got up quickly, defecated and disappeared into the foliage. Hoping to at least track its progress, I watched for wiggling cattails. Unlike with the raccoons last week, there was no telltale movement from the foliage. 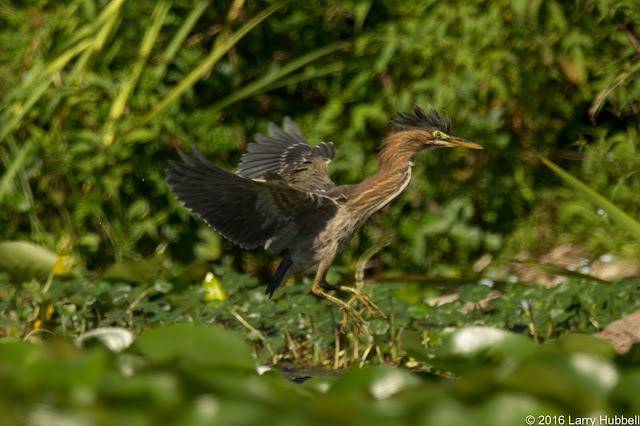 However, almost immediately this green heron burst out of the cattails. The heron must have been directly in the otter's path. The little bird looked so shocked and disturbed that I suspect it must have been sleeping. Green herons almost always look oddly unbalanced, especially with their necks extended in flight. This one reminded me of the supersonic Concorde.

Their unique shape does make them easy to identify, even from a distance. In the last few weeks I have seen one in Yesler Cove, flying near the osprey nest, in front of the Water Front Activities Center and even sitting on the south side of Montlake Cut - watching the early morning rowers. 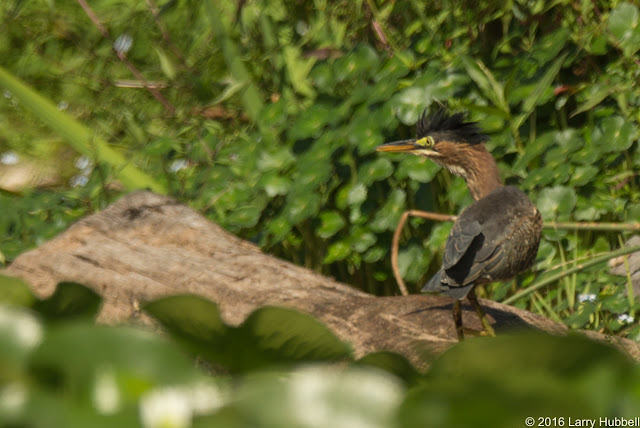 This heron did not go far. It began pacing and turning on logs along the shoreline. 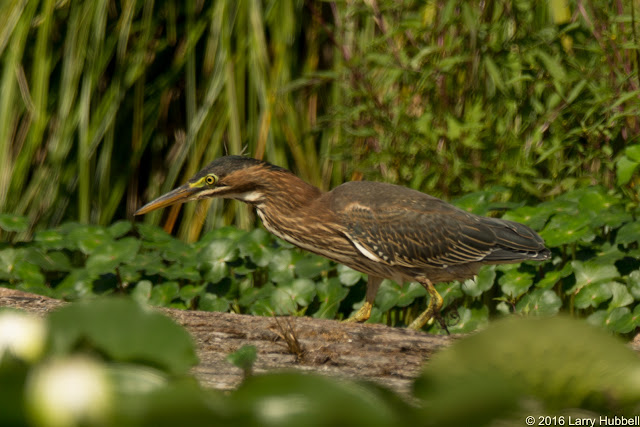 Usually I see them calmly waiting for small fish while peering down into the water. They are known to use twigs to attract the fish. Someday I hope to document their baiting behavior. By the way, the website Birds of North America (BNA) mentions that the little white triangles near the leading edge of this heron's wing indicate it is juvenile. 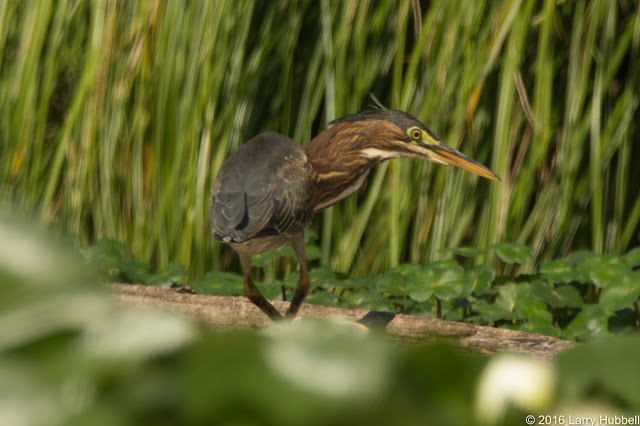 The speed and abrupt turning of the heron made me suspect she was hunting dragonflies. They were much too fast for me to track through my view finder, but they were certainly all around. The ones closest to me seemed to be mostly eight-spotted skimmers. 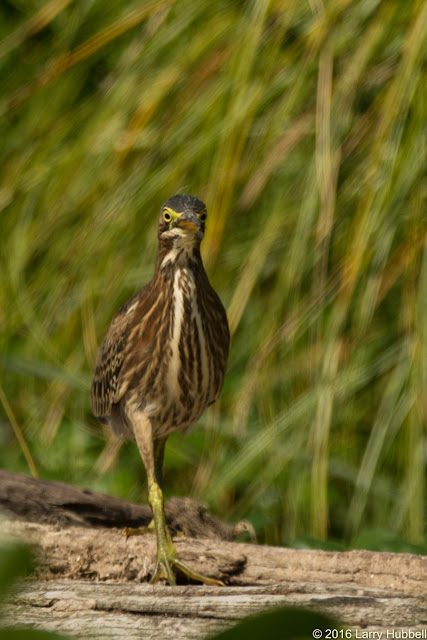 Green herons have a thousand different looks. You can see many of them in my previous posts. My favorite is Green Heron Yoga, but Shape Shifters also presents some surprising views. Note: The birds in both of those posts are adults with no little white triangles. 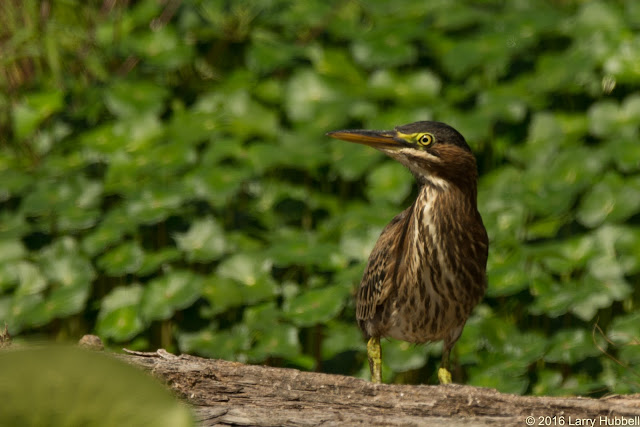 If you would like to see a little shape shifting in action, click on this photo which will enlarge it, then use the forward button to see the next photo. Toggling back and forth will show that the bird's head and legs remain stationary while the body and neck shift around and prepare for a change of direction. (You will need to hit escape to return here.) 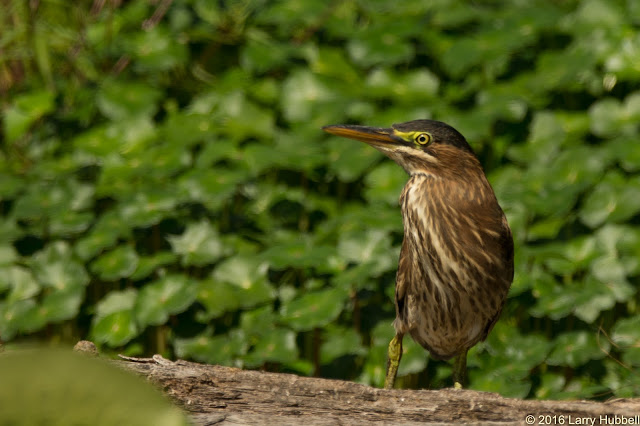 Clearly, the little heron is focused on something, and it is not a fish in the water.

By the way, BNA also mentions an unresolved debate between various researchers. Some think that reddish stripes through the dark green "cap" on juvenile green herons indicate the bird is female. The agreement is not universal. I am always surprised by how much we still have to learn about the creatures around us. 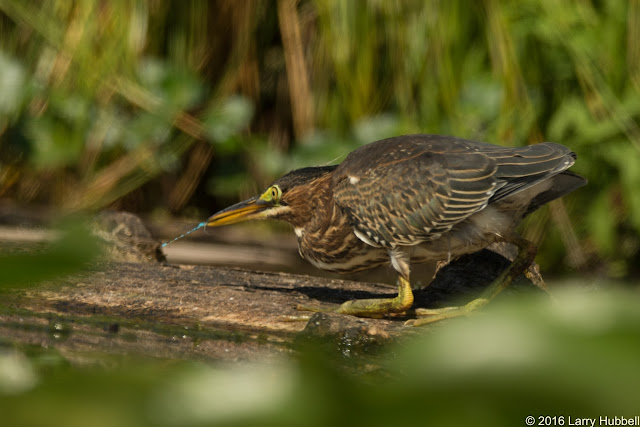 Faster than the eye can follow, the heron snags a dragonfly. Given such a distant view of the dragonfly, my best guess is that it is a male, Tule Bluet. I used Dennis Paulson's pamphlet, "Dragonflies of Washington" to try to eliminate the other options, but do not blame Dennis if my identification missed the mark.

It was also interesting to see the heron wiggle its hips just before striking. The behavior made me think of a young house cat pouncing on a string or of a baseball player looking for a good pitch to hit. It makes me wonder how much of what we do is based on instincts shared with other lifeforms on earth. 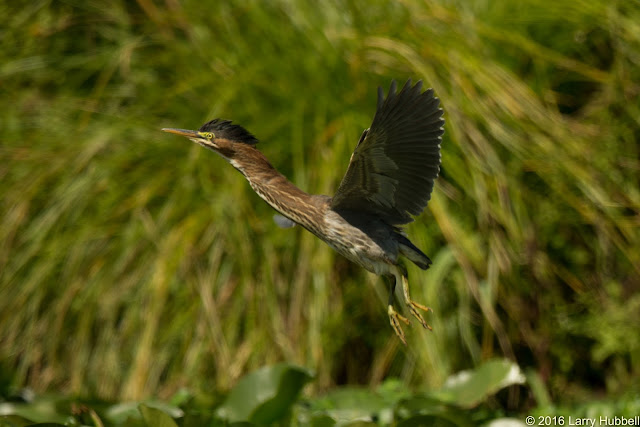 After eating its appetizer, the green heron follows the Union Bay buffet line to the southwest. 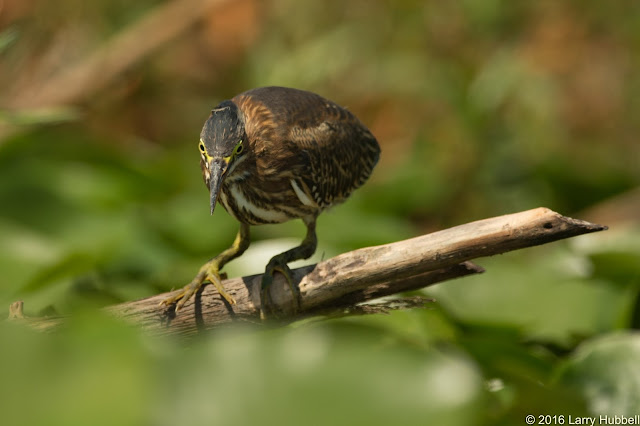 The little bird moved a couple of more times before settling on a perfectly elevated perch just above the water. 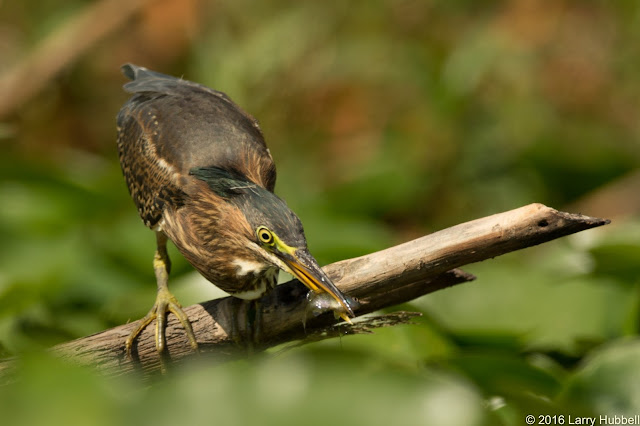 The oddly long neck allowed the bird's body and feet to never leave home, while its head swooped down and snapped up a little fish. My new fish identification chart does not help much with minnows, but this sure looks a lot like the native trout minnows, which I remember from boyhood. The heron was still hungry. 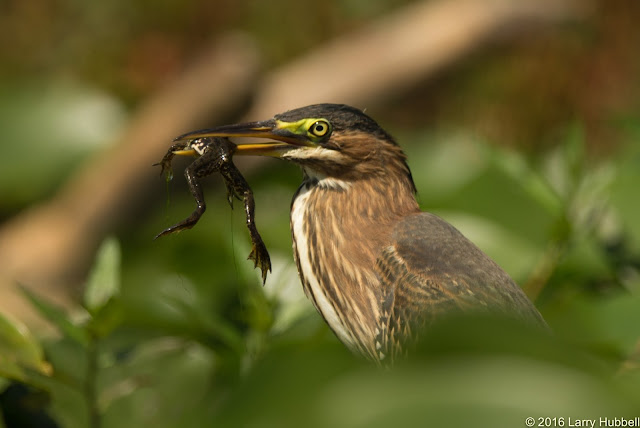 For her main course, she move a few feet south to pick up a frog from the Union Bay buffet. 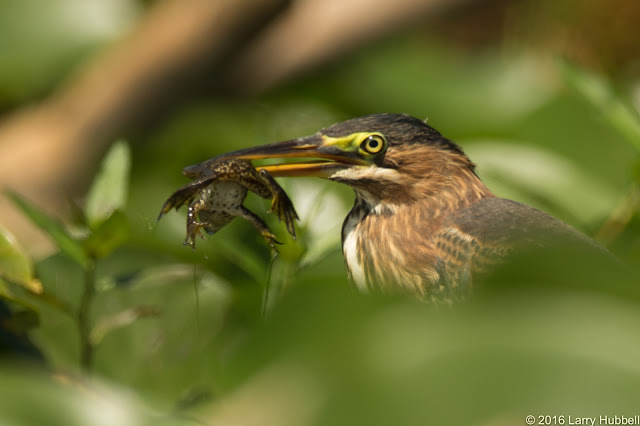 I checked a couple of natural history books without finding a conclusive match for this frog. I found eNature.com when I googled frog identification. The very cool function of this online field guide was the ability to use my zip code to filter the probable list of frogs. The site returned five options; a tailed frog, a western toad, a pacific tree-frog, a red-legged frog, and a bull frog (non-native). The only one that looked like our little frog was the tailed-frog. Their description says males have pear-shaped tails. I did not see a tail on this frog, so I am assuming that females do not have tails. If anyone has more knowledge and would like to validate or correct my guess, I am always open to learning. 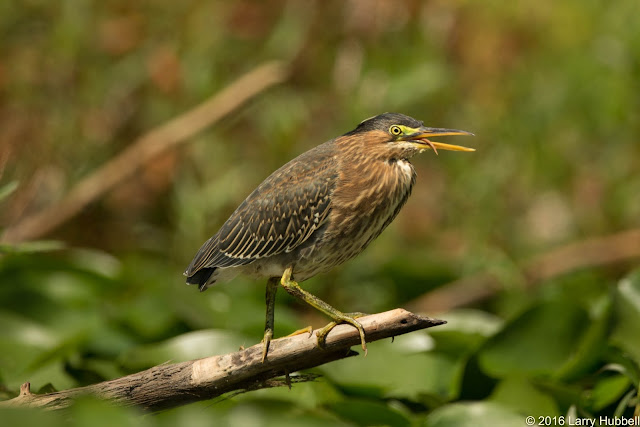 After finishing her meal, the heron wiped her beak on her perch. Feaking is apparently an instinct shared by a wide variety of birds, from hummingbirds to bald eagles. Finally, she licked her lips to to put the finishing touch on the cleaning process.. 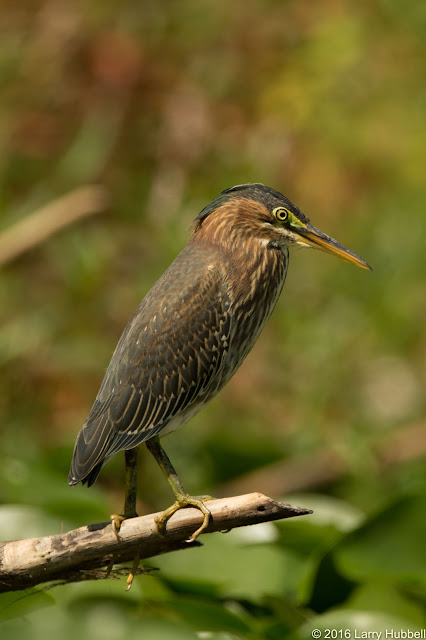 Photographing this little heron was a real delight, but hunger finally won. I left the little heron sitting happily in the sun and headed home to find my own buffet.

Have a great day on Union Bay...where green herons feed in the city!