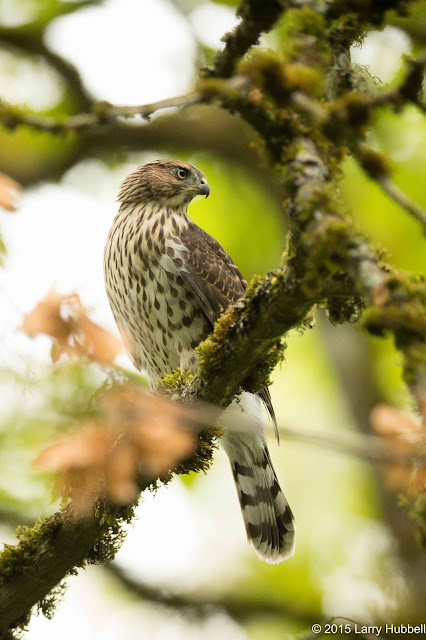 The old nature-versus-nurture discussion was always a crude simplification of a complex situation. With the study of epigenetics, we are beginning to dive deeper into the details of information transfer between generations. Websters defines epigenetics as "The study of heritable changes in gene function that do not involve changes in DNA sequence."

The classic example is a study with mice. The study, by Dias and Ressler from Emory University, shows that a parent's fear and knowledge can be passed on to their young, even when their offspring are unborn at the time of the initiating experience. You can read a more detailed report on the study by Clicking Here. 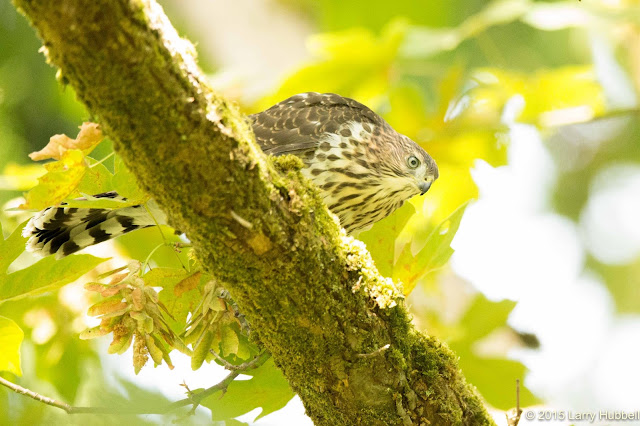 This week an encounter with three juvenile cooper's hawks made me wonder about the relationship between instinct and epigenetics. Websters defines instinct as, "Something you know without learning it or thinking about it." 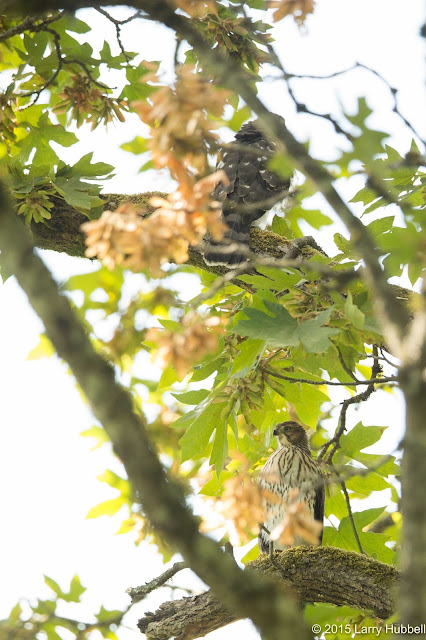 The two young hawks in this photo are apparently siblings who have no problem being in close proximity. One of the ways we can tell they are young is the white spots visible on the back of the upper bird. (Thank you to Penny Lewis for pointing this out.) 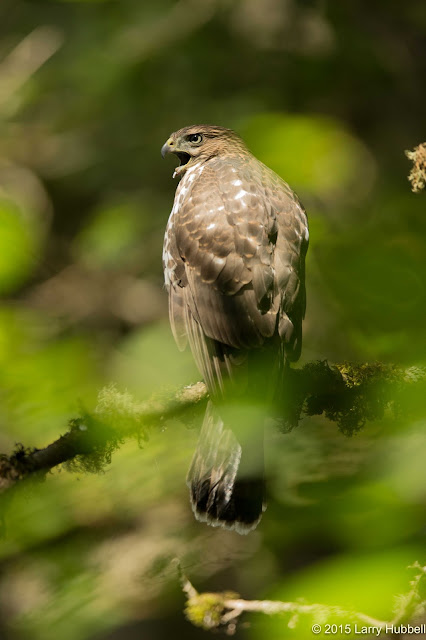 Another clue is the whistling cry they make. The sound is their method of requesting food from their parents. This descending whistling sound only lasts for a few weeks. Once the birds are totally on their own they quit begging for food and the baby talk stops. 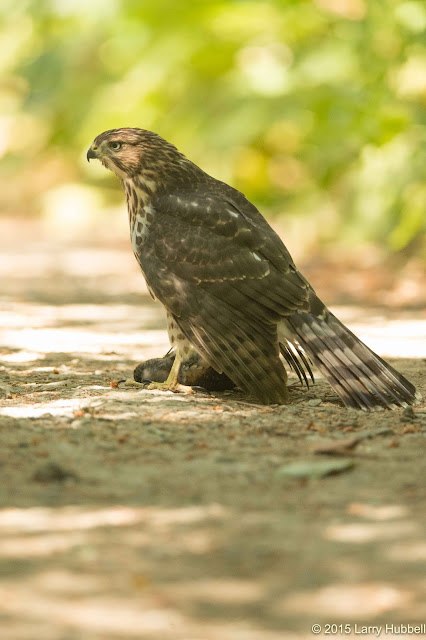 While watching the first two birds, another one popped out of the bushes with breakfast in hand. As the third juvenile flew away, I could see the prey was a smaller bird, most likely a dark-eyed junco or a black-capped chickadee.

What was most interesting about the experience was the behavior of my daughter's dog, Ginger. Ginger is a 29 pound Labradoodle, with oddly straightened hair, compared to her curly-haired litter mates. 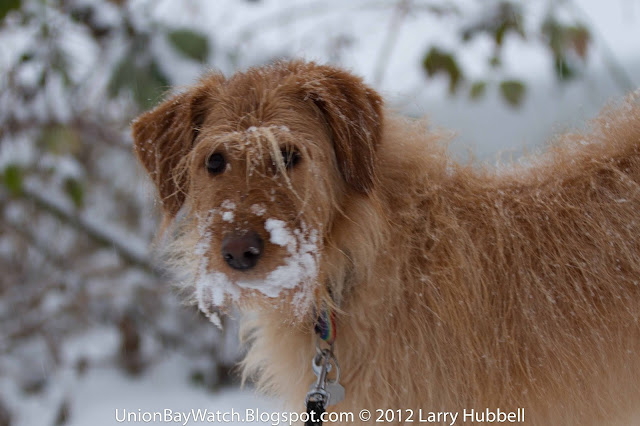 A winter photo of Ginger from a few years back.

Ginger gets her daily walk by accompanying me while I photograph birds. Over the years she has learned to be quiet and patient when I stop for photos. I have never noticed Ginger being fearful of any bird. However on Thursday, with the young hawks crying all around us, Ginger came and sat down between my feet for the first time ever. Paying closer attention I noticed her tail was down and occasionally she was trembling. We headed for home, when petting and gentle talk did not help her calm down. 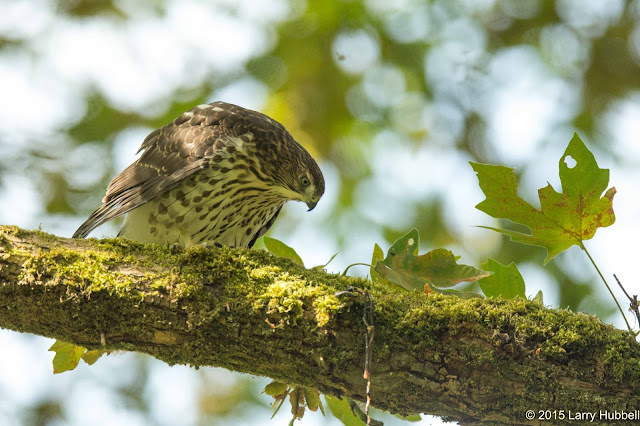 Ginger outweighs even the largest cooper's hawk by at least 28 pounds. We originally brought Ginger home when she was only a few weeks old so I am positive she has never had any negative interactions with any bird of prey. She has watched me photograph cooper's hawks many times without any sign of fear. The only things different about this situation were the number of birds surrounding us and the whistling, food-begging cries they were making. 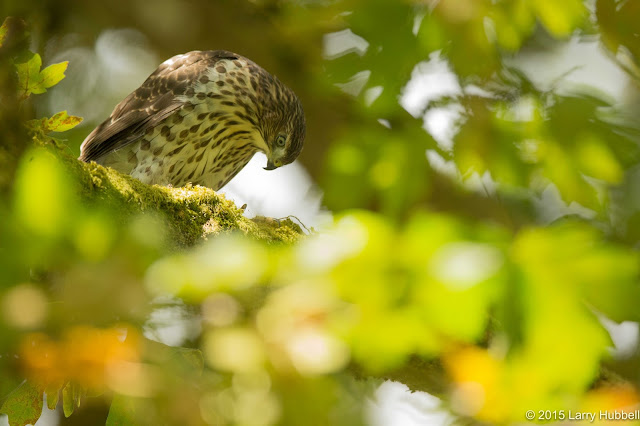 Friday morning I took Ginger back to the same area. All was quiet and Ginger was perfectly happy. However, when I heard the young hawks in the distance and started walking towards them, Ginger whined and began pulling in the opposite direction. I took her home and she returned to being her happy, good-natured self.

I was photographing the cooper's later in the morning, without Ginger, when one of my readers stopped by with her dog. The hawks were calling out nearby and when we looked her dog's tail was down in a fearful position. All of this makes me think that dogs may have an instinctual fear of the cries of juvenile cooper's hawks.

I don't know the answer, but it will certainly be interesting once scientists can fully explain how nonverbal information is transferred between generations. The answers may even help us understand why we sometimes have irrational fears. 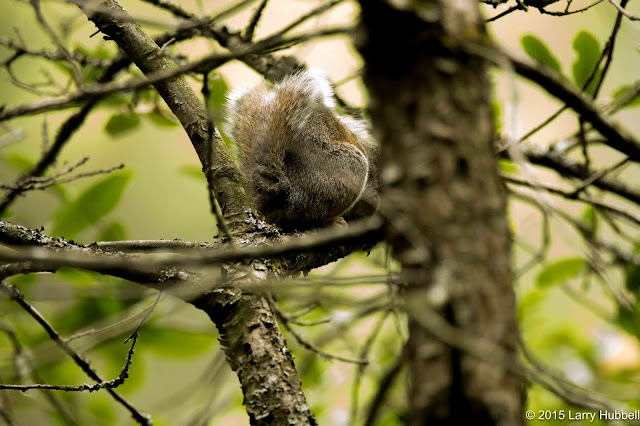 Of course not all fears are irrational. Later Friday, the three young hawks gathered in the branches above this squirrel. The squirrel had every reason to be afraid. It tried hiding behind this tree trunk before giving in to its trembling fear and running from tree to tree with the hawks in swift pursuit. 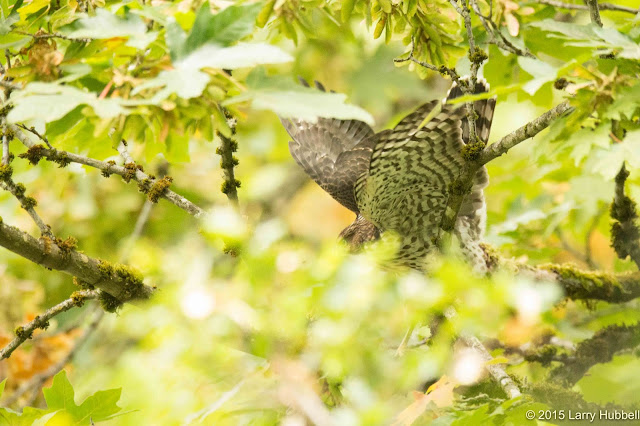 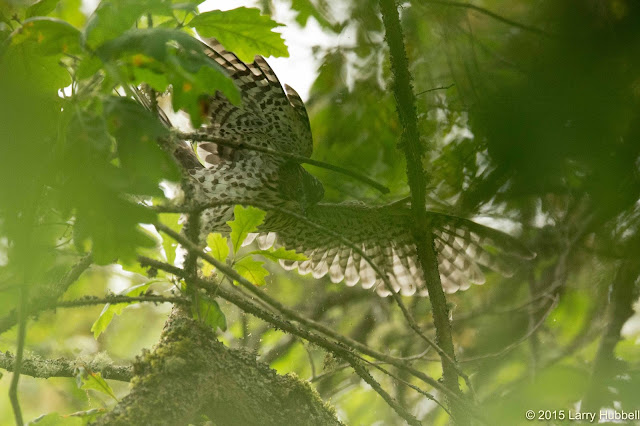 It is nearly impossible to get good photos of their in-foliage maneuvers, but it is most amazing to watch. Luckily for the squirrel, the young hawks were not able to execute a coordinated attack. What they were doing was closer to competitive stalking. The squirrel's fear provided a heightened level of motivation, which no doubt helped it escape. I wonder if the squirrel knew the cooper's hawks were young and inexperienced.

Just for fun let's see if you can pick out the young and inexperienced hawk in the following photos. To increase your learning opportunity, associate each of the following descriptions with the correct photo. 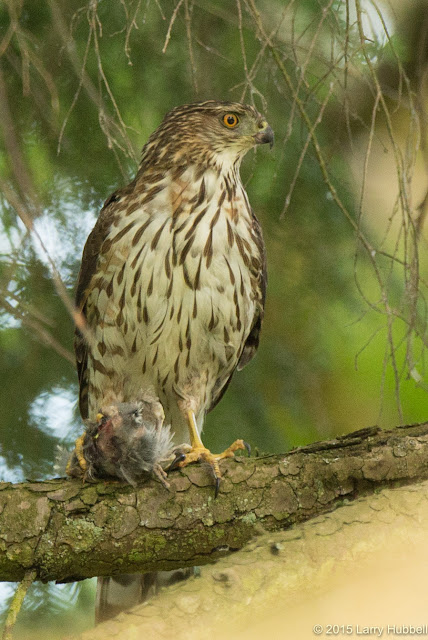 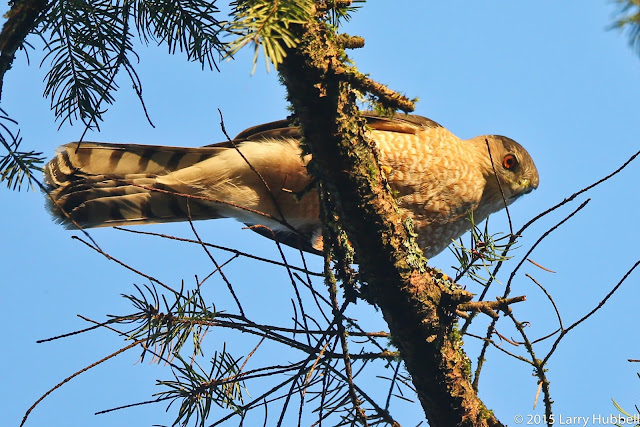 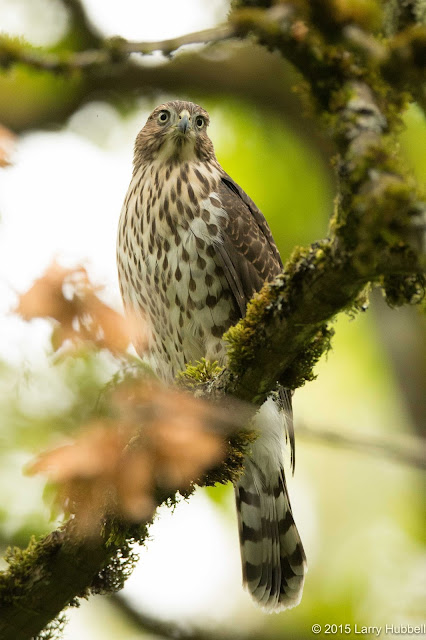 There are two clues in the photos that are critical to determining which description belongs with which bird. Below my name are both the clues and the answers.

The most obvious clue is the difference in colors on the chest. After roughly 18 months the birds have their mature plumage. They loose the vertical, brown, tear-drop stripes and instead gain horizontal orange bars on their chests. From this we can determine that bird #2 is the mature adult cooper's hawk.

The more subtle clue is in the iris color of each bird. As the birds mature, the iris goes from being very light in color to a pale orange and later a darker, reddish-orange color. These three photos give a clear view of the progression in color. From this we know that bird #1 is the young adult cooper's. By the way she is the same bird seen in last week's post.  Finally, bird #3 is a juvenile hawk.