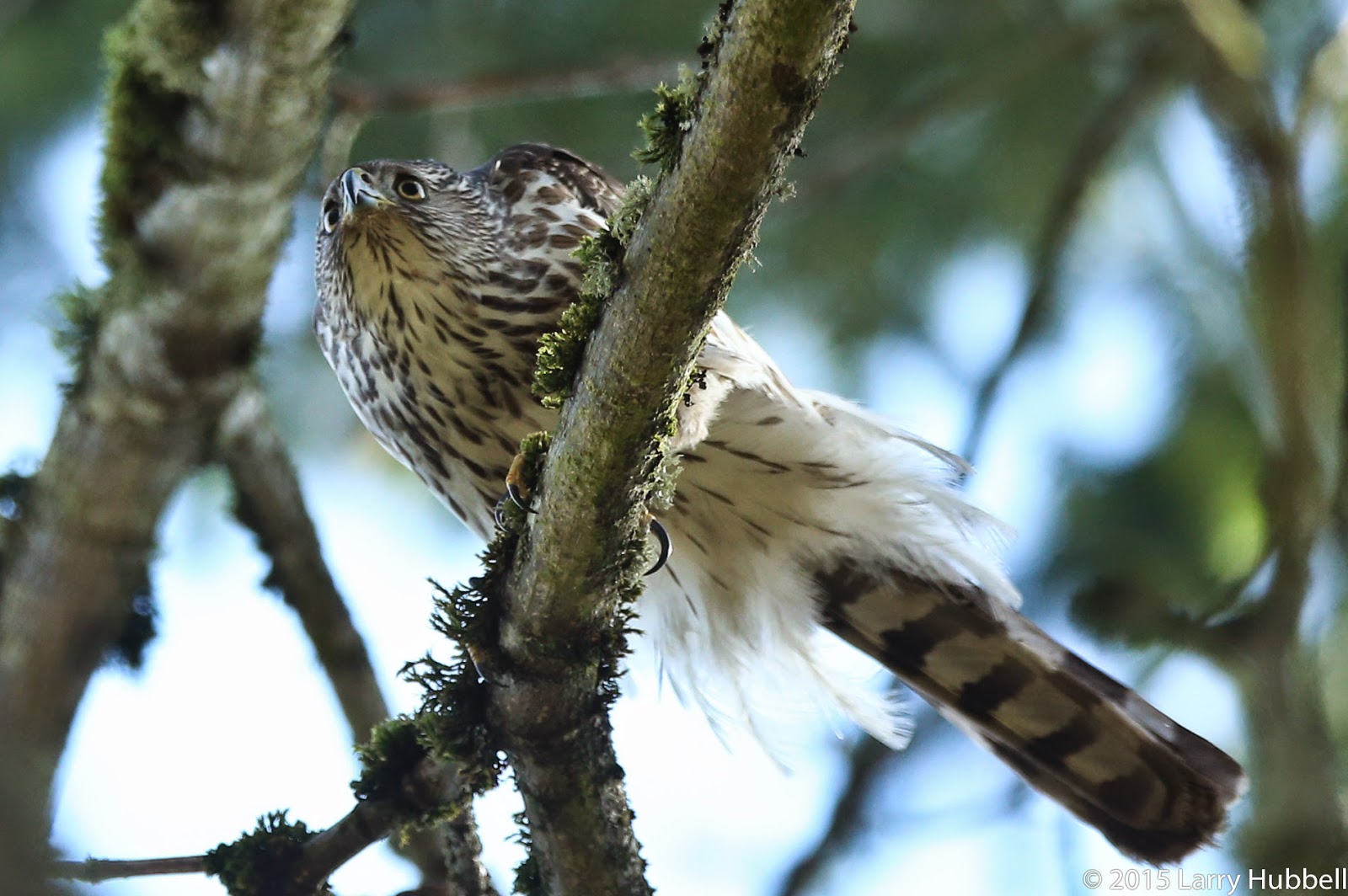 Mating and nest building are highly intertwined in the lives of cooper's hawks. Last week's post focused on nest building. This week, we look from the female's point of view, at the other half of the process. 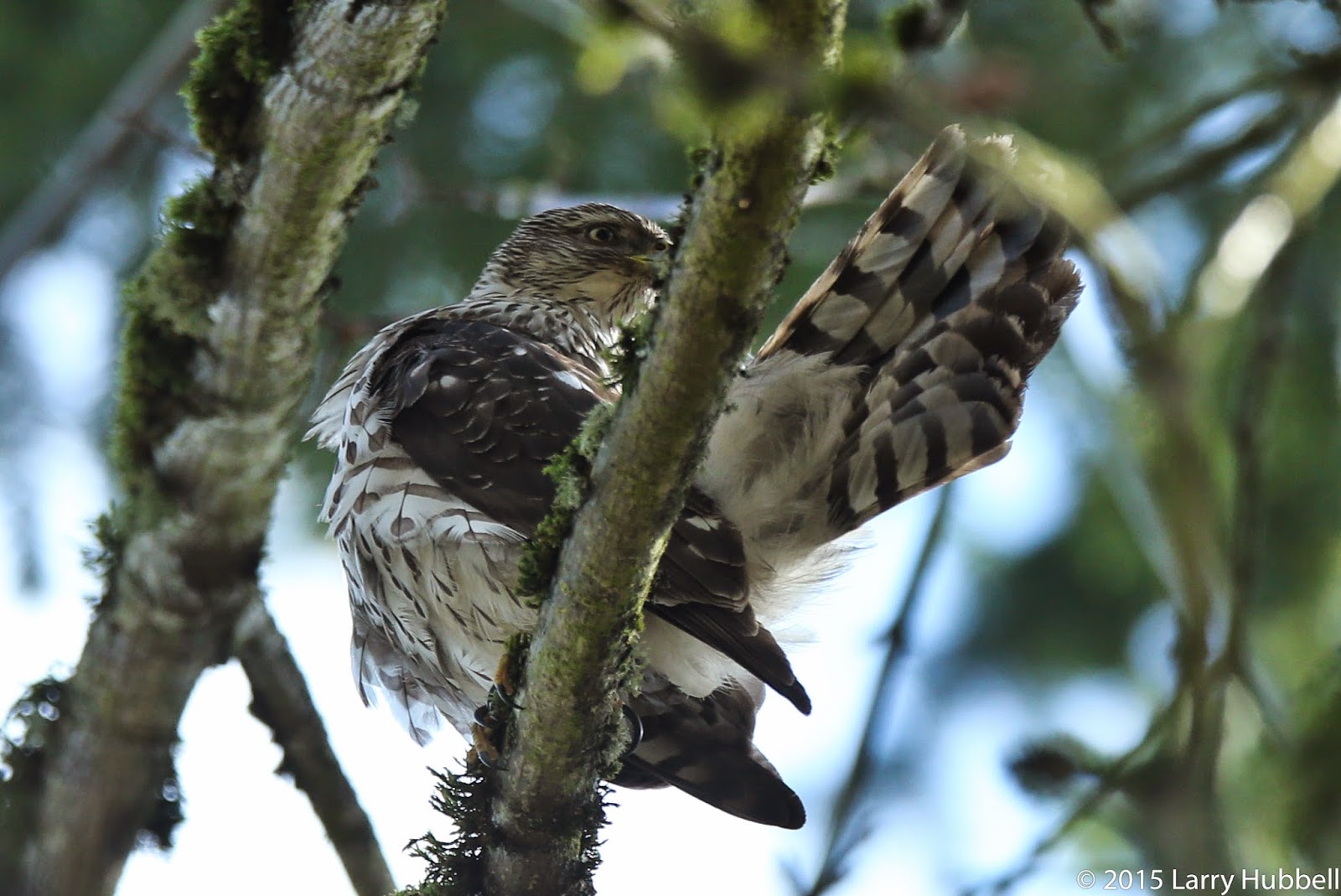 While the male is nest building, or hunting, the female sits nearby. Here, she is grooming her tail feathers. 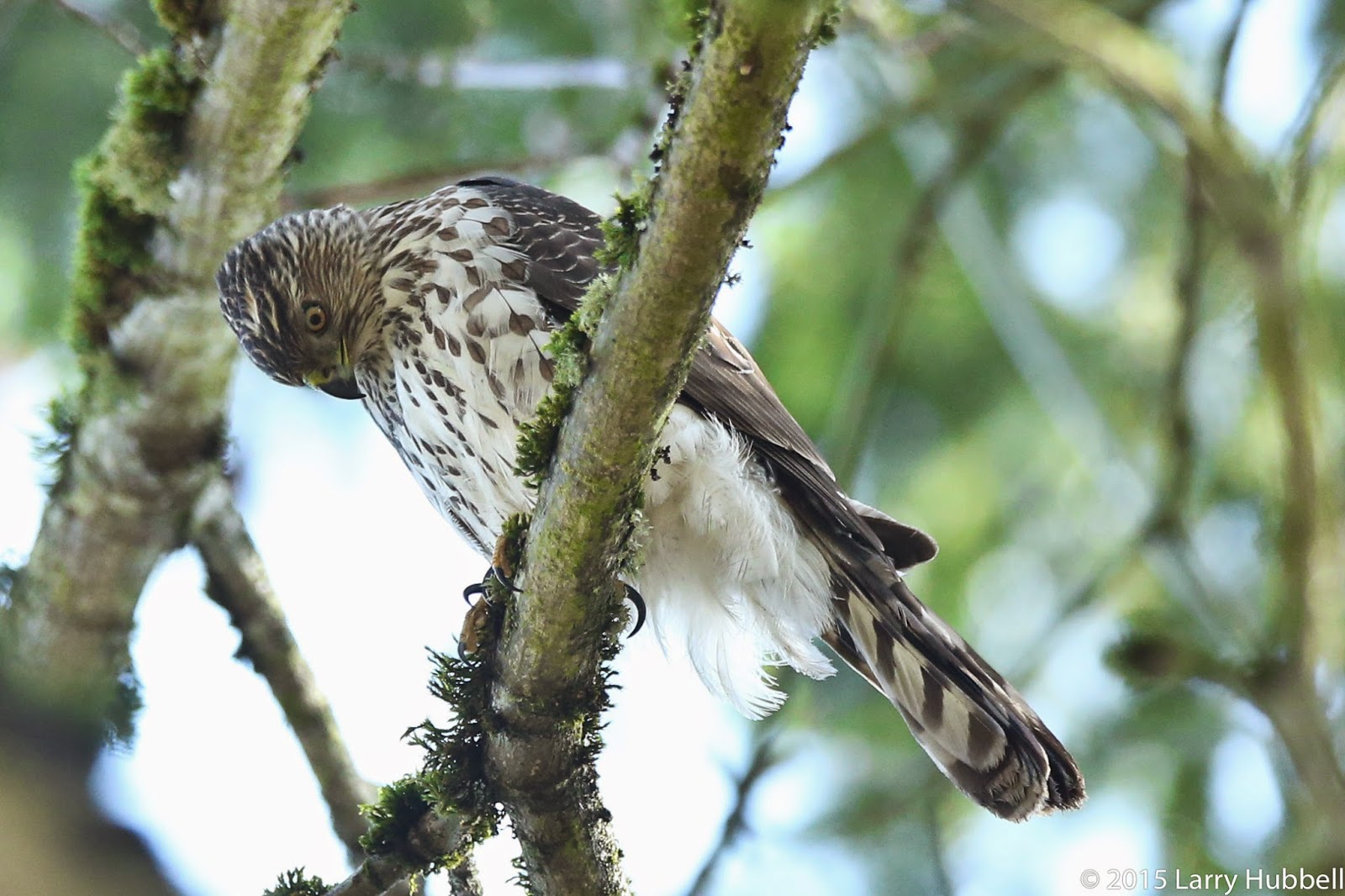 The female is perfectly capable of hunting, instead she often calls incessantly for the male to bring her food. There must be some logic to this approach. Possibly, she is conserving energy, that will be invested in eggs. It also might be a test, for the male to prove he is capable of providing food, for her and their young. Since the males often work on multiple nest sites, she may also be evaluating the site. 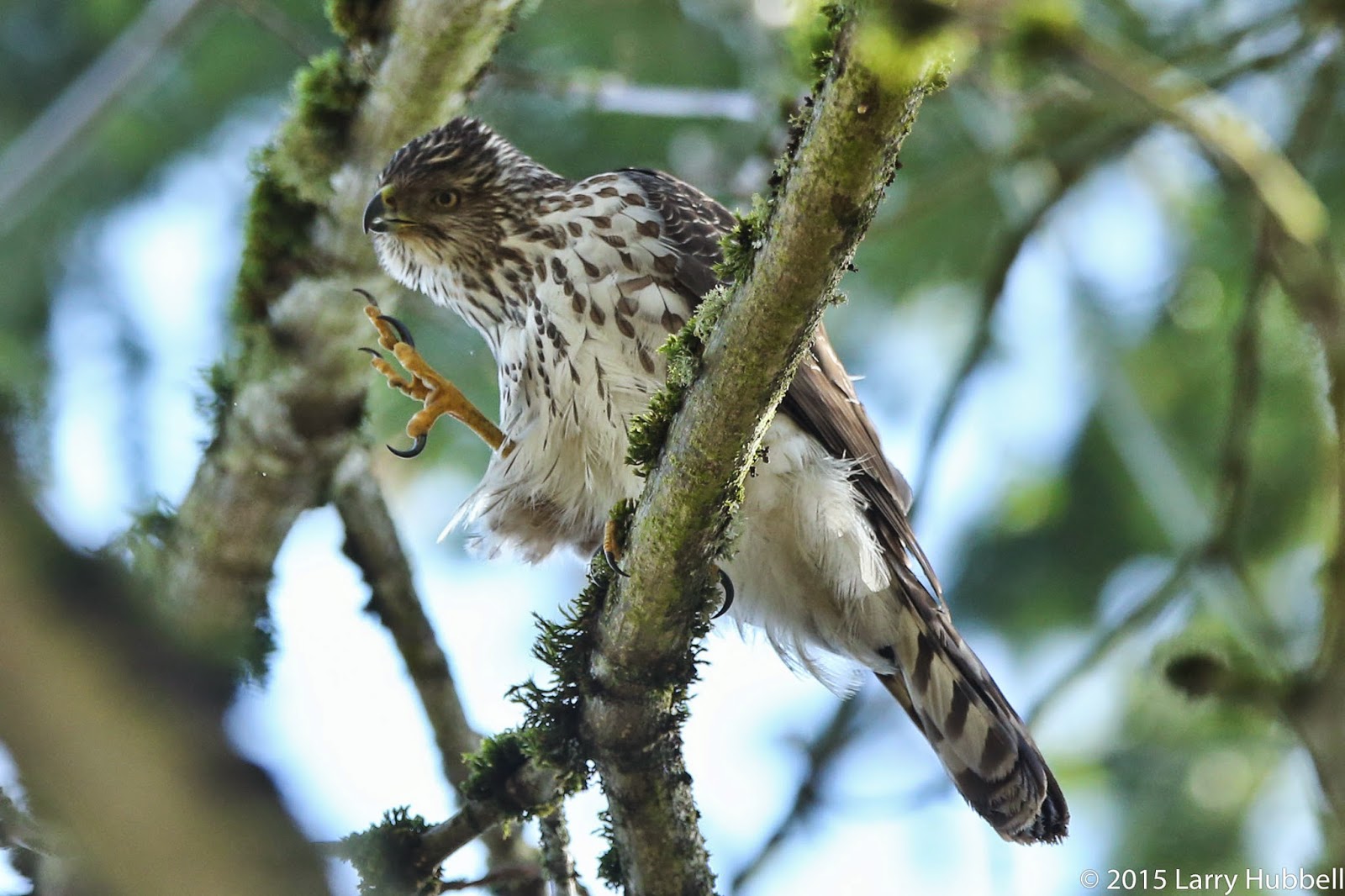 In any case, the female seems to spend the bulk of her time, maintaining her appearance. 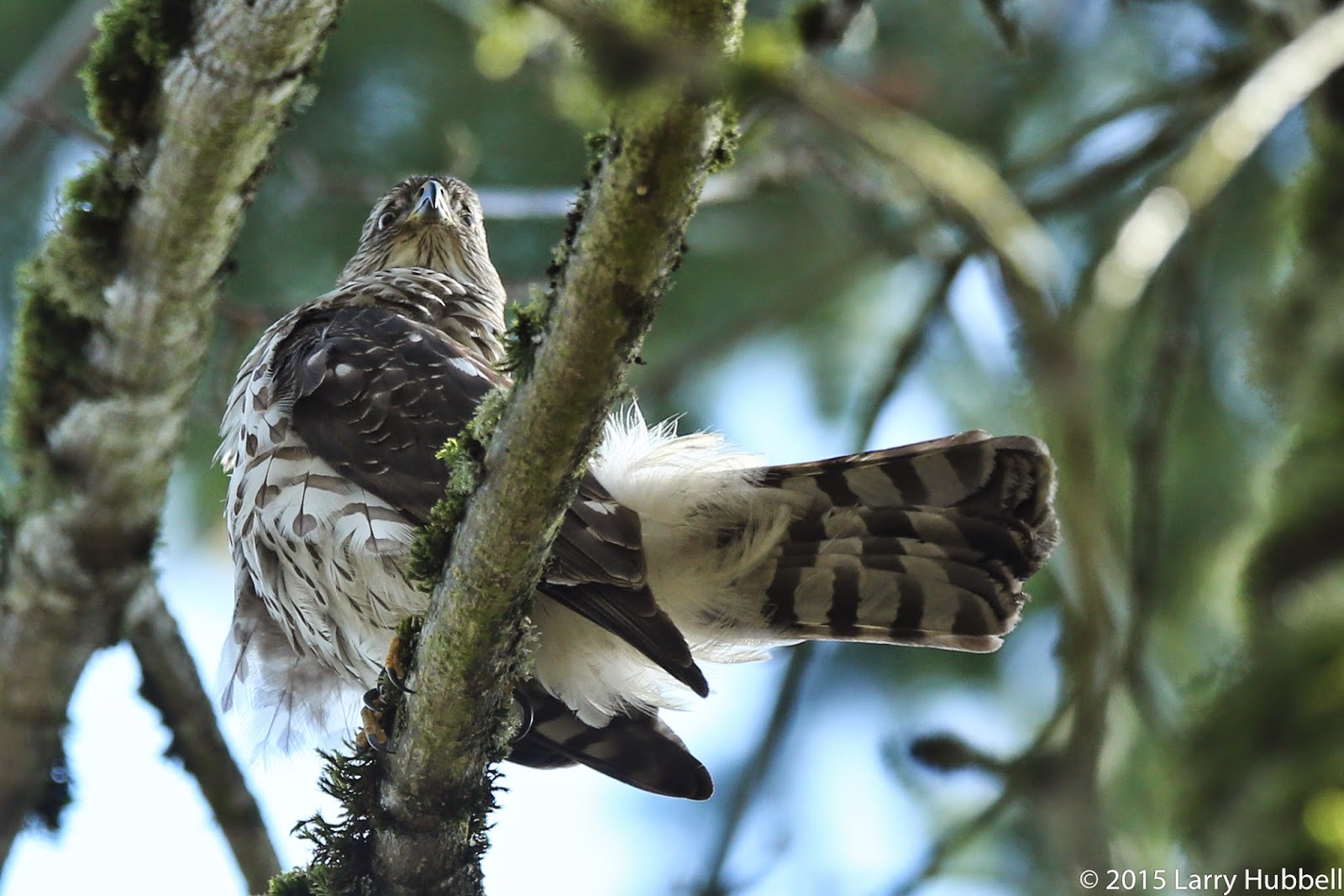 The females are generally larger than the males and they tend to dominant the relationship. The website, All About Birds, says, "the females...specialize in eating medium-sized birds", about the size of the males. Size, isn't the only advantage the females bring to the relationship. Often a female will require a male to bring branches to their new nest, not to mention food, before she will allow mating to occur. 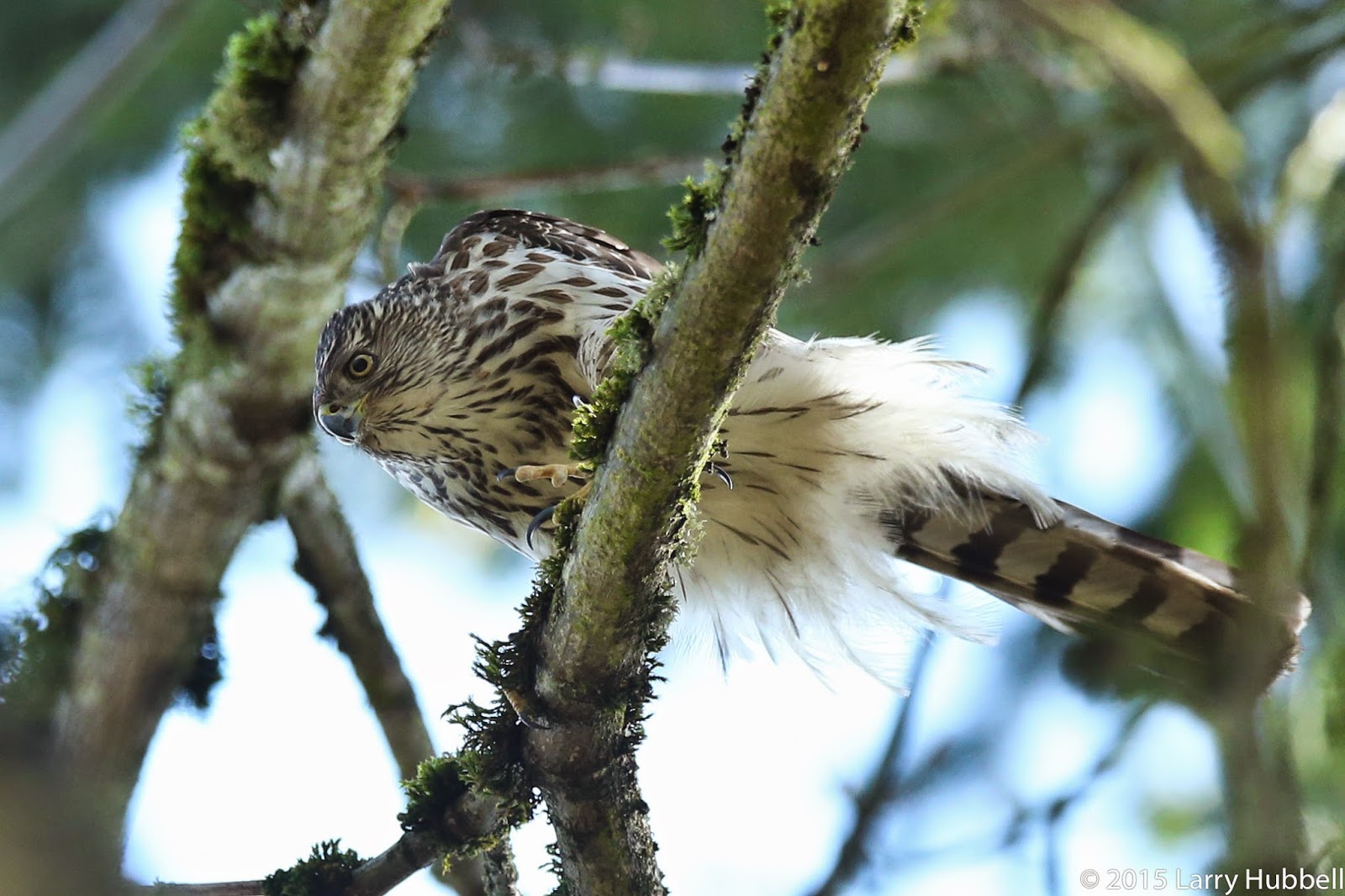 When the female is satisfied, with the male's work ethic, she assumes an inviting posture. 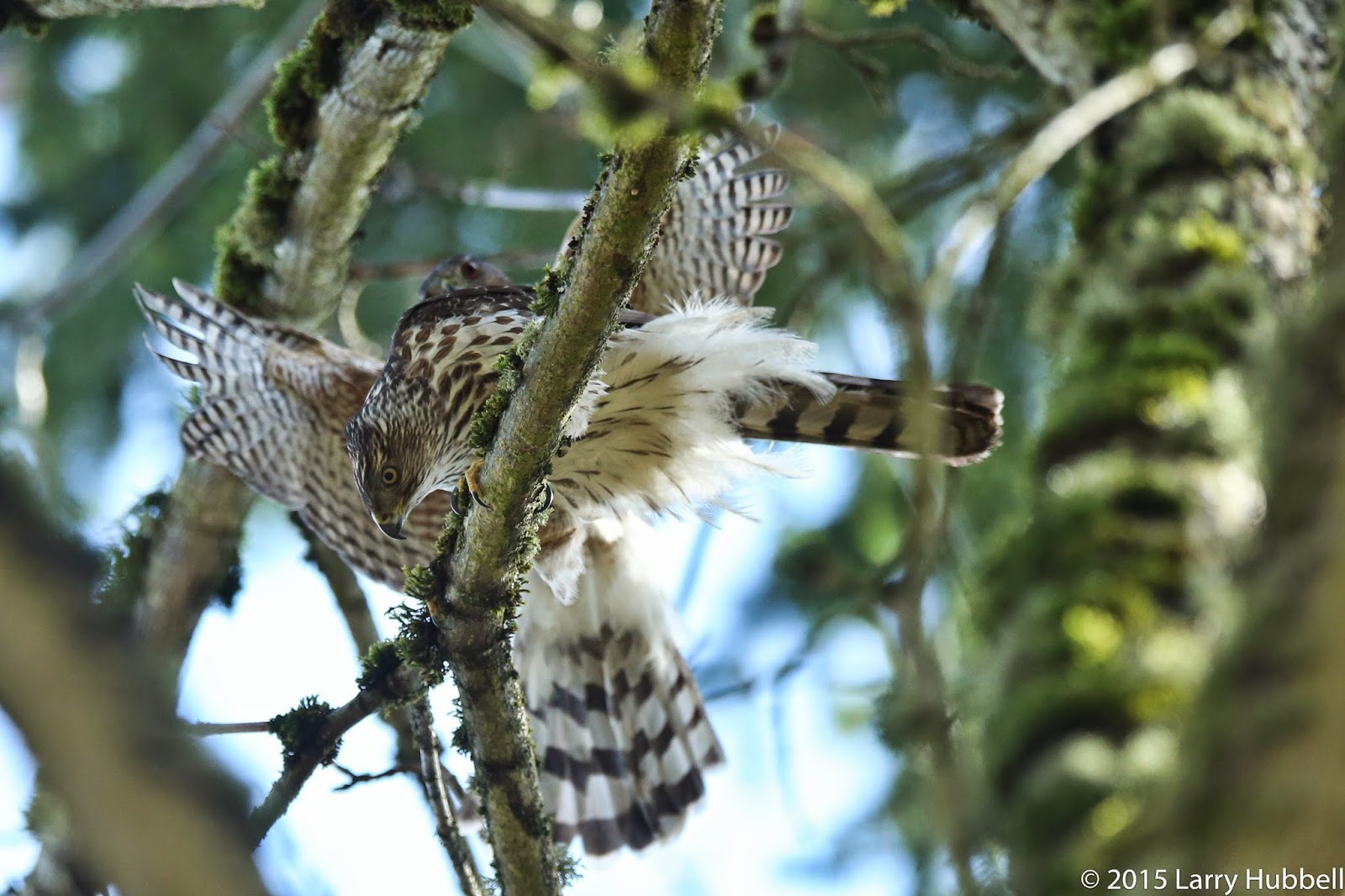 The male is very aware of the invitation and appears quickly. 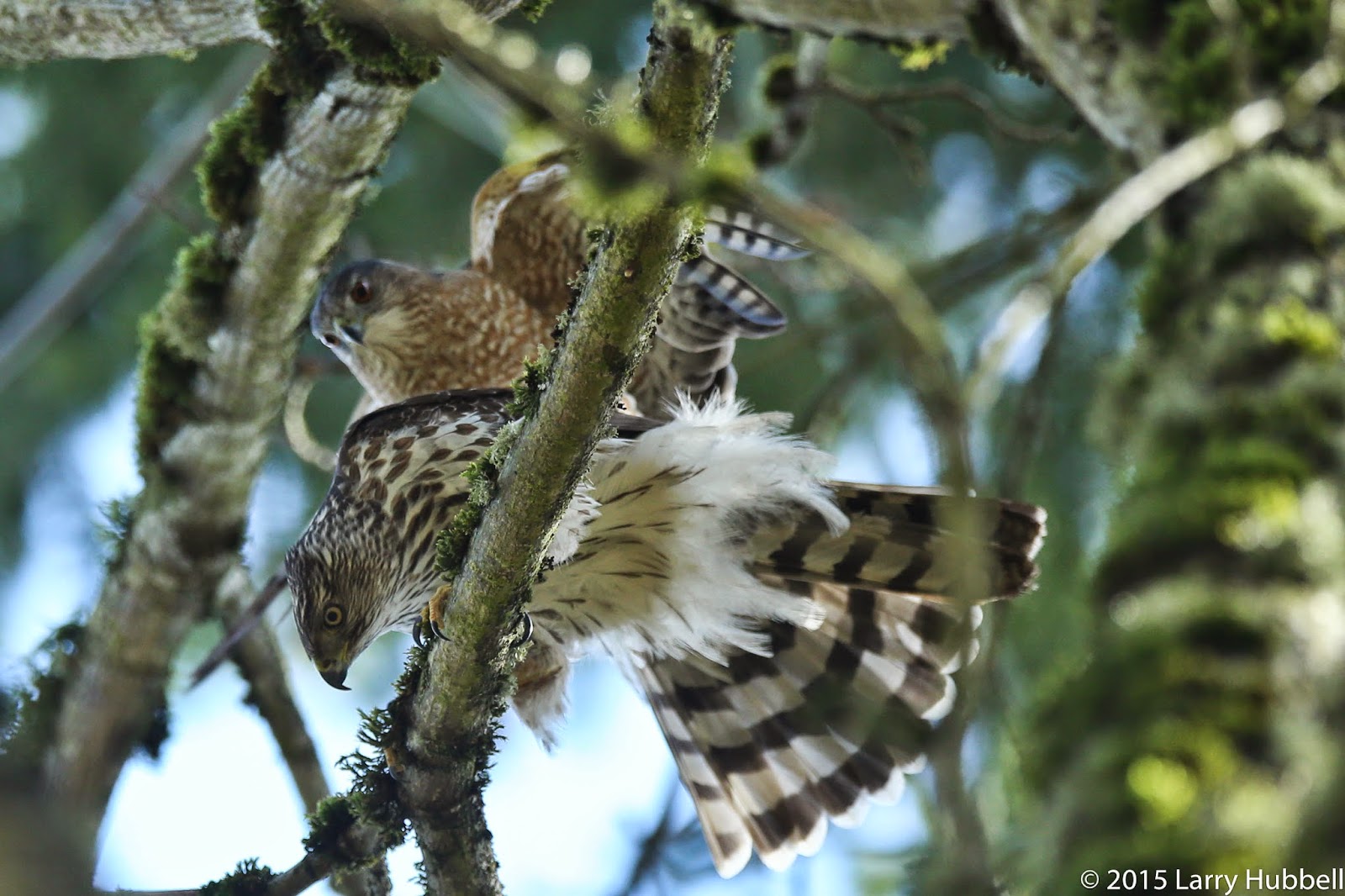 The orange-coloring on the male's chest shows he is older and more mature. In this case, maybe because the female is younger, the size difference is not obvious. 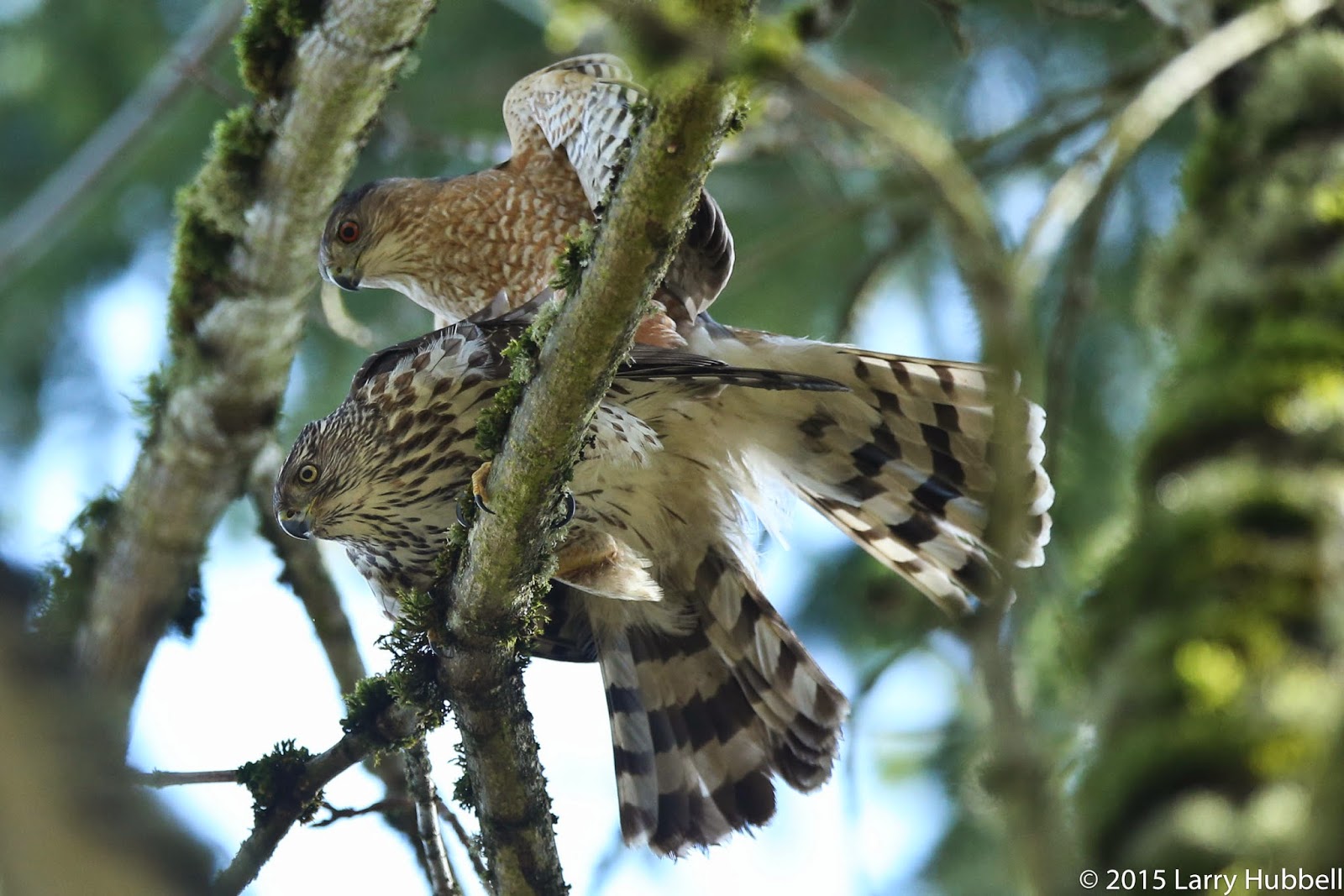 Their long tails help them maintain balance while mating. 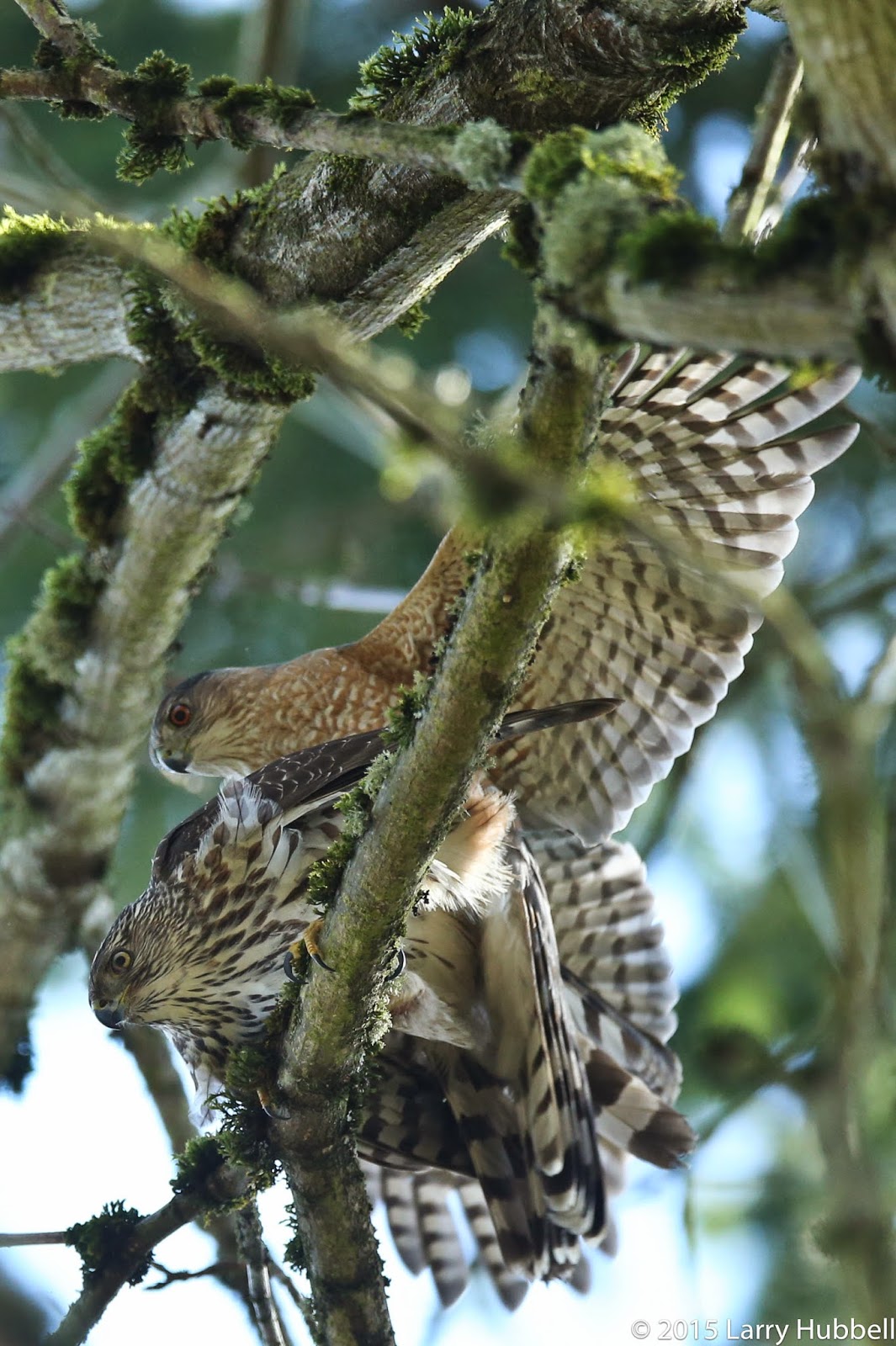 When the male spreads his wings, he resembles an acrobat, balancing on a tightrope. 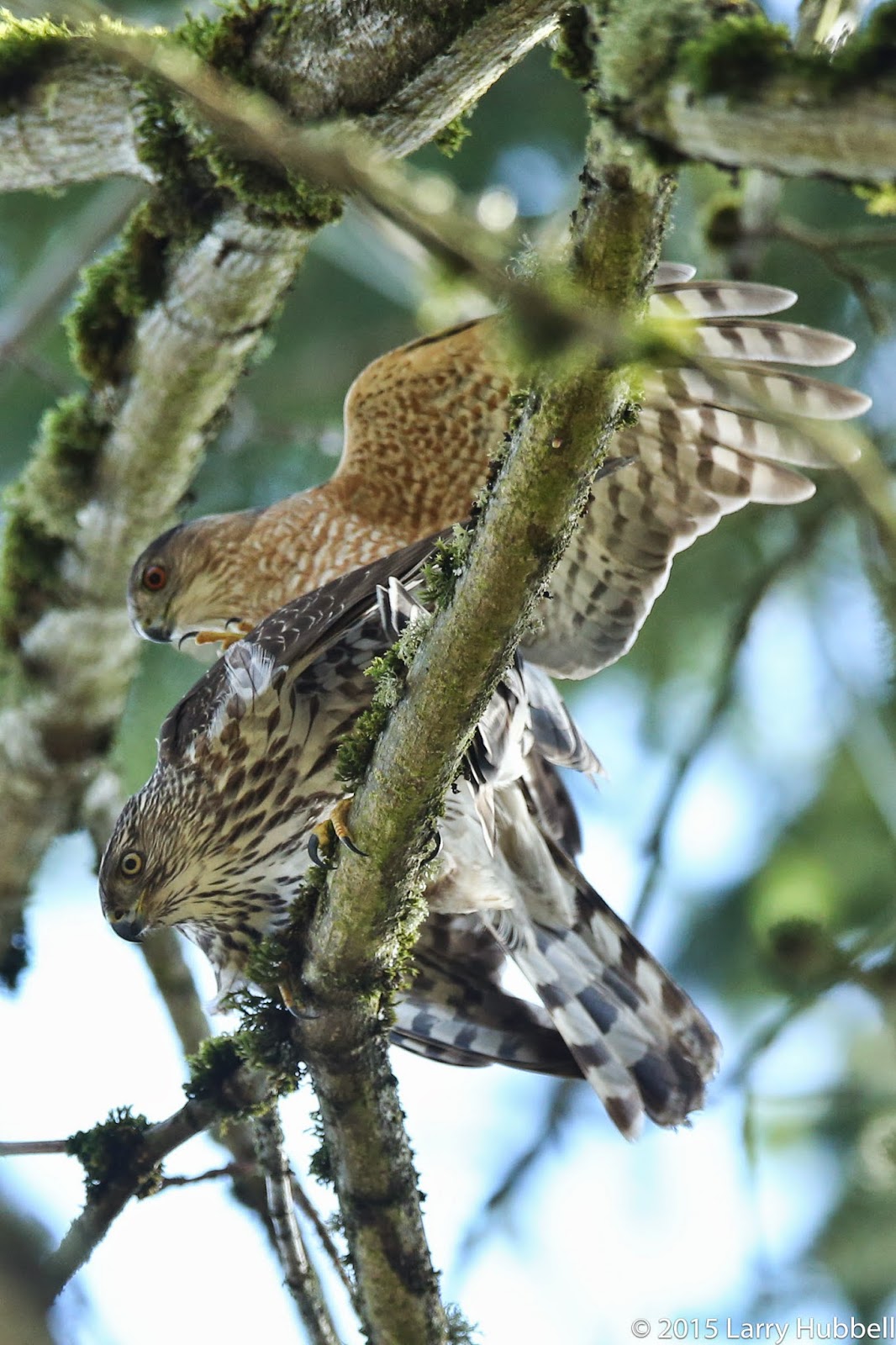 The male's talons appear above the female's shoulder. 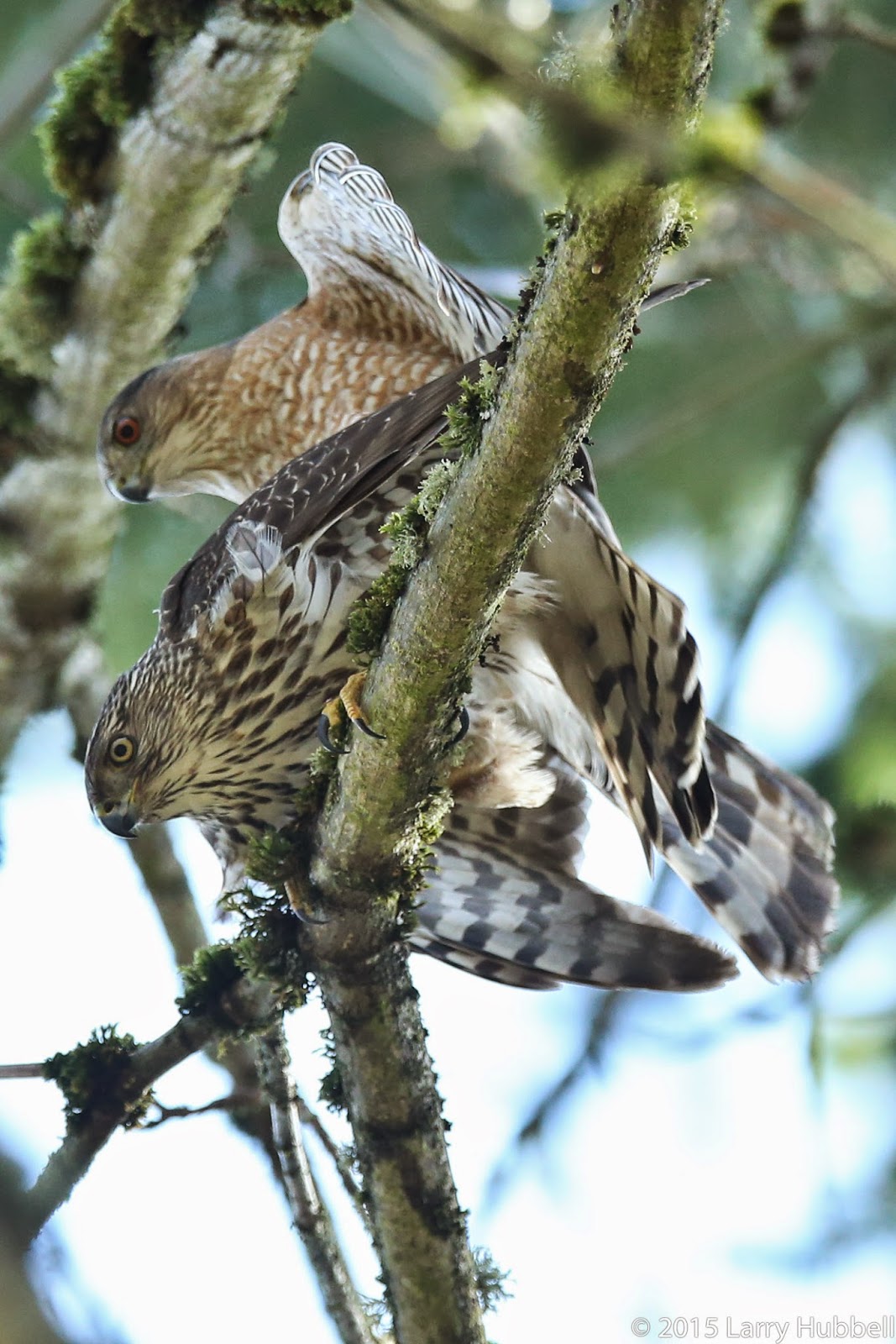 He must grasp some of her feathers, hopefully nothing more, to maintain his position. 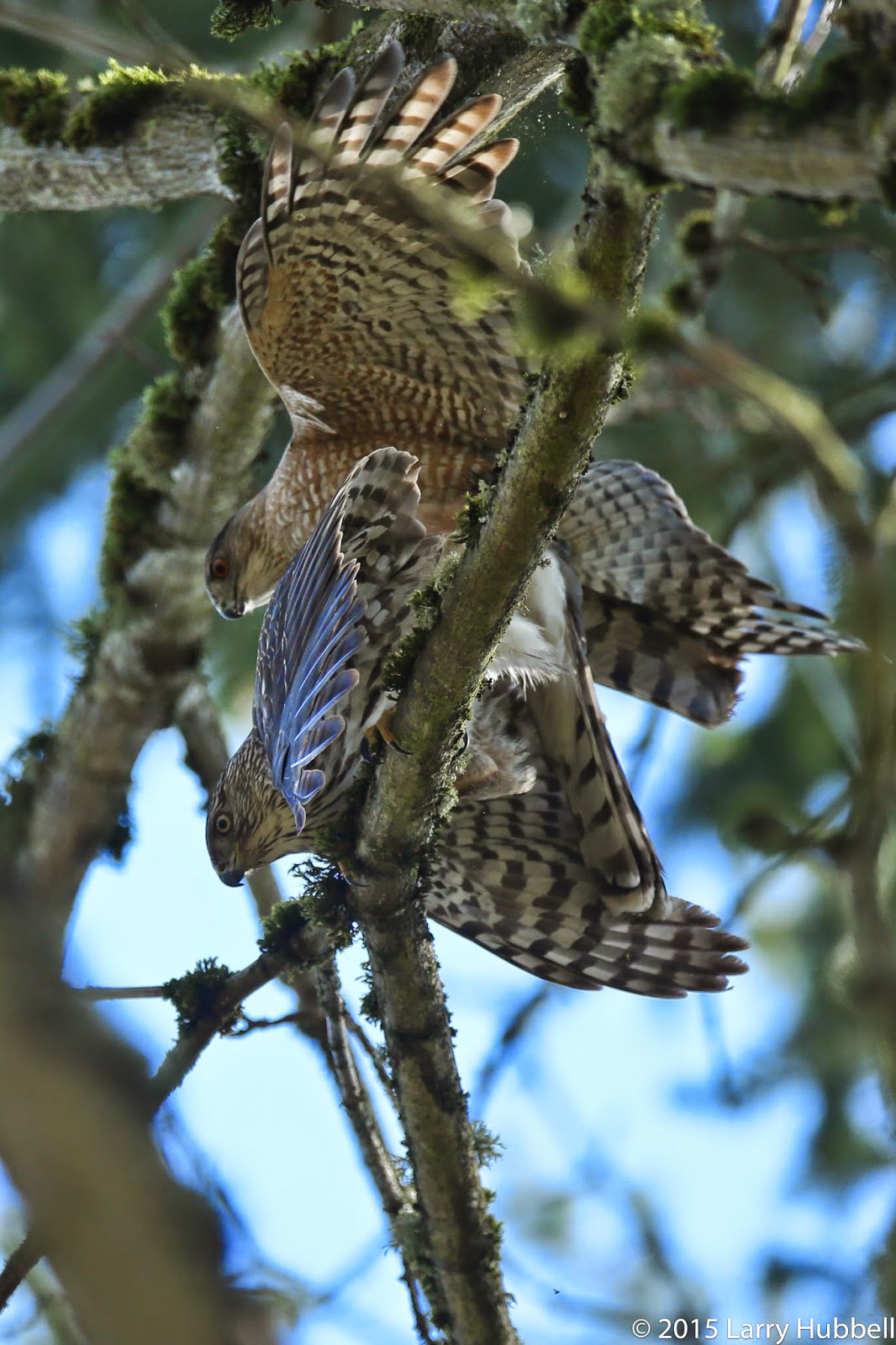 To help with their balance, the female spreads her wings as well. 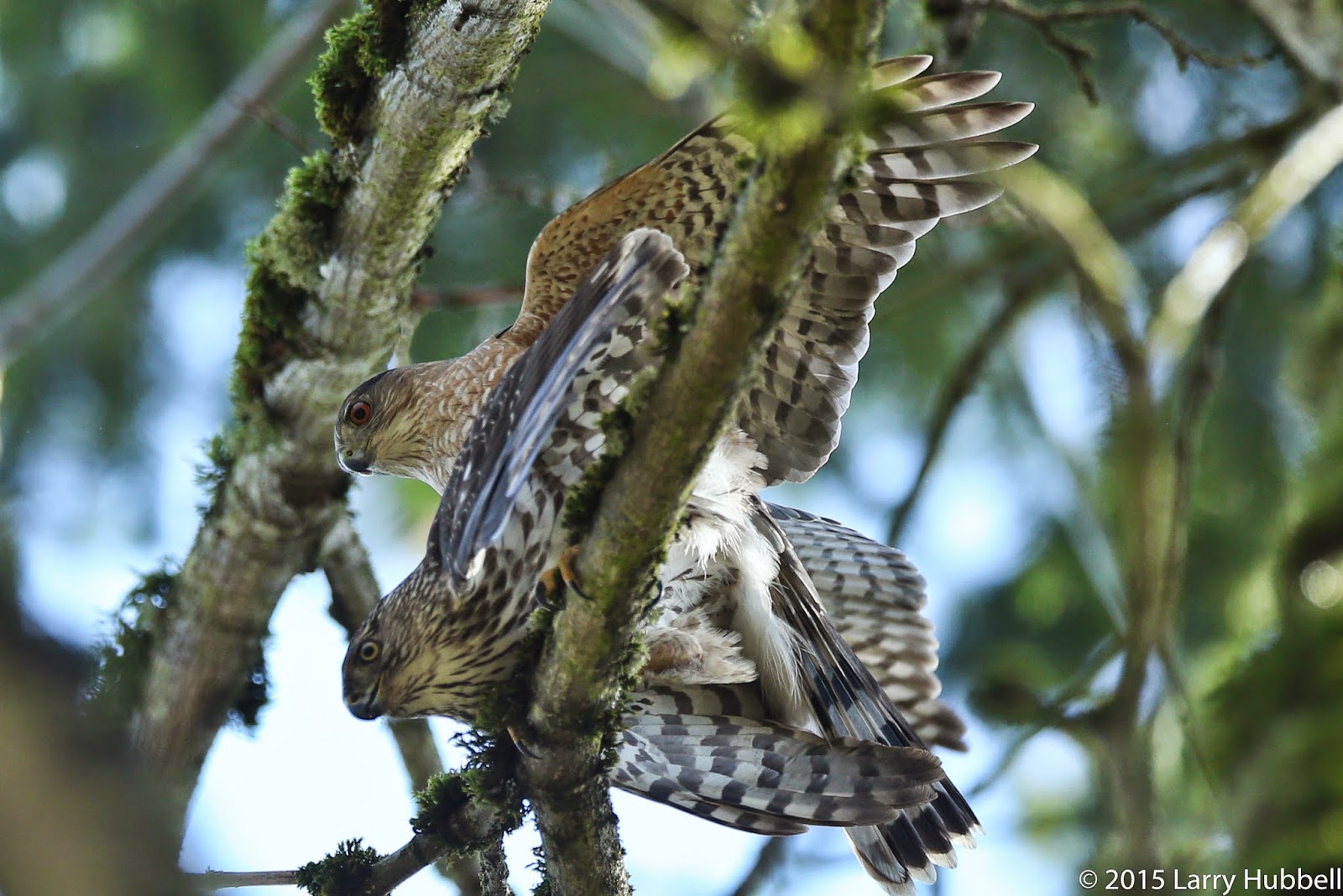 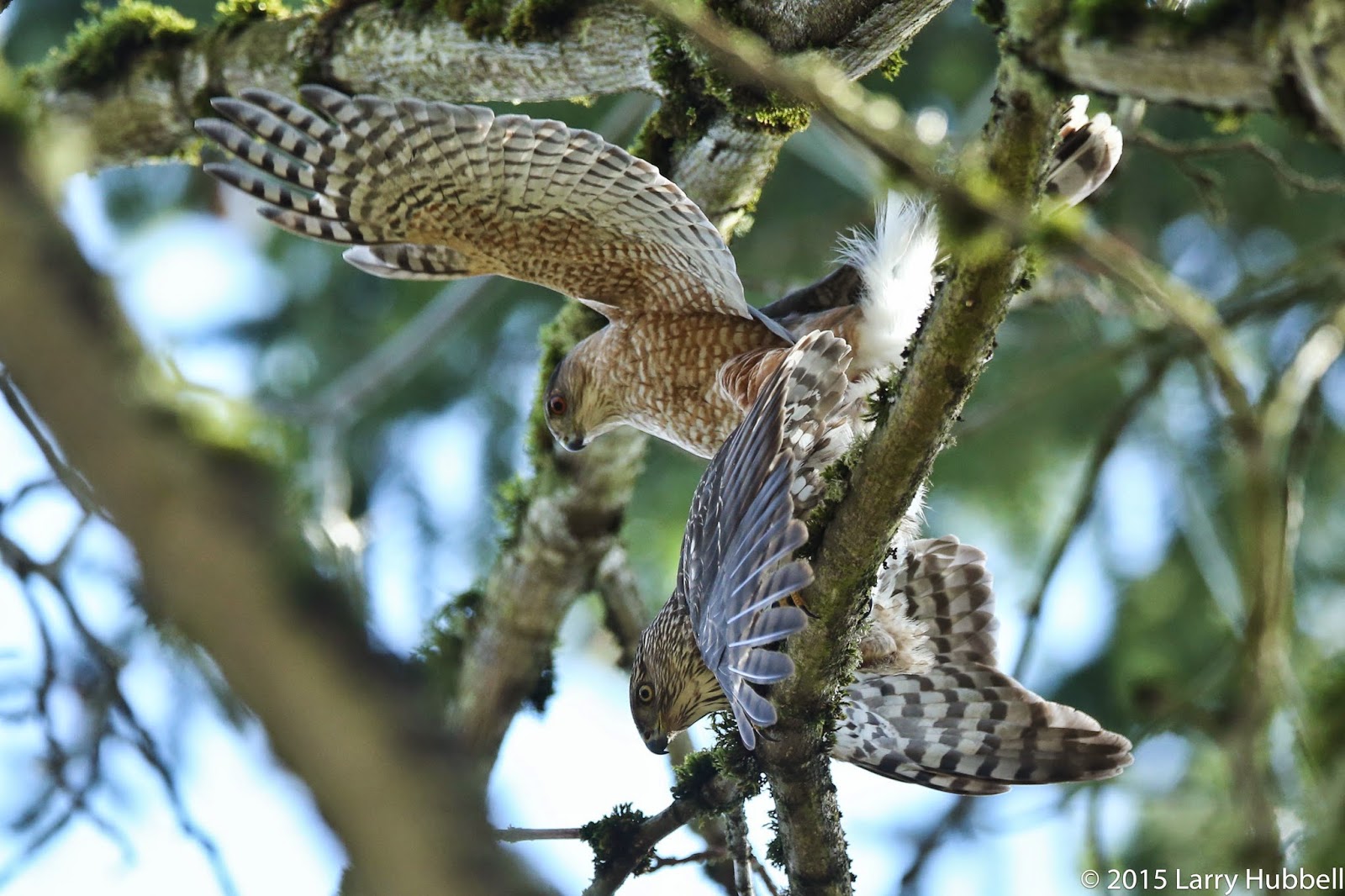 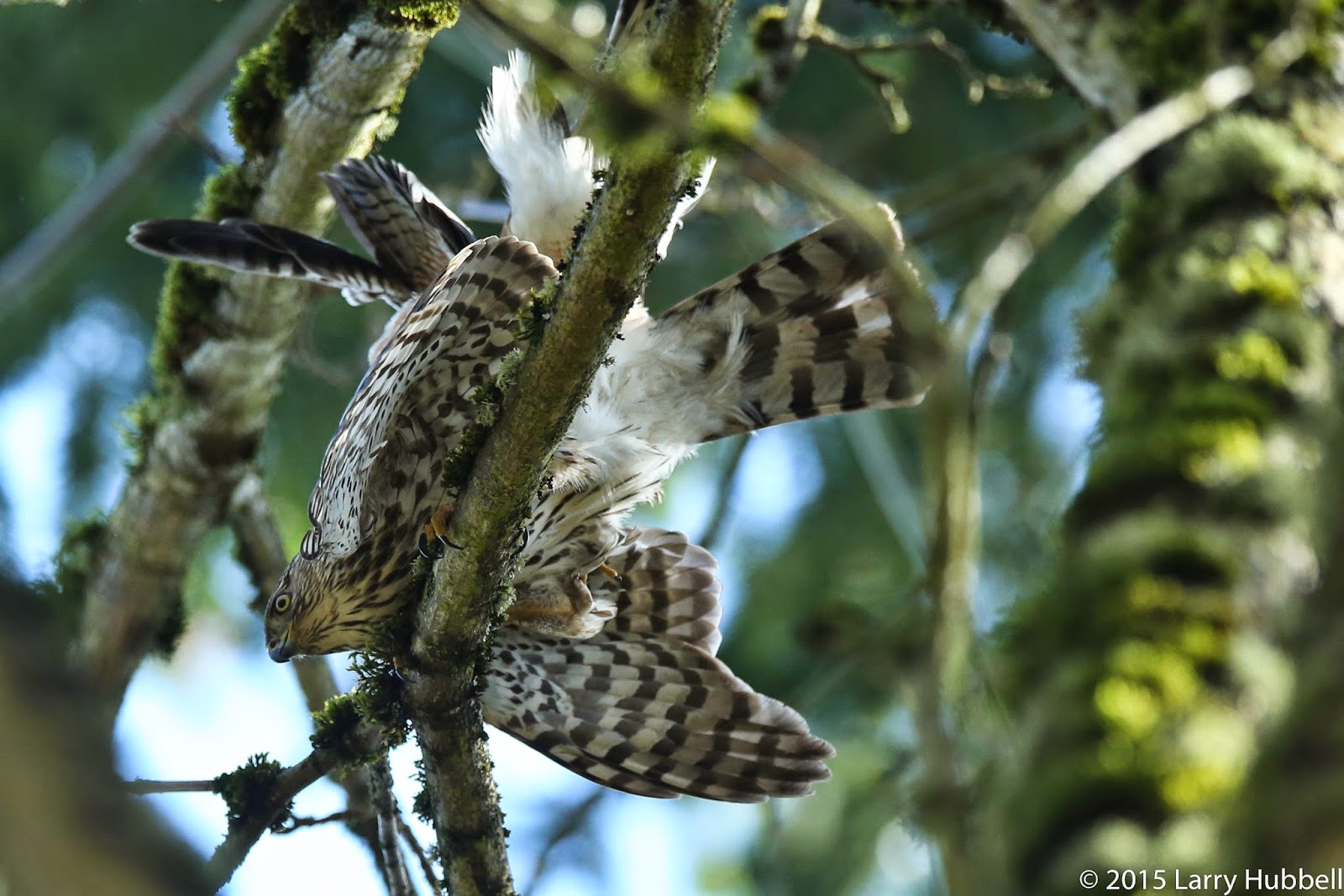 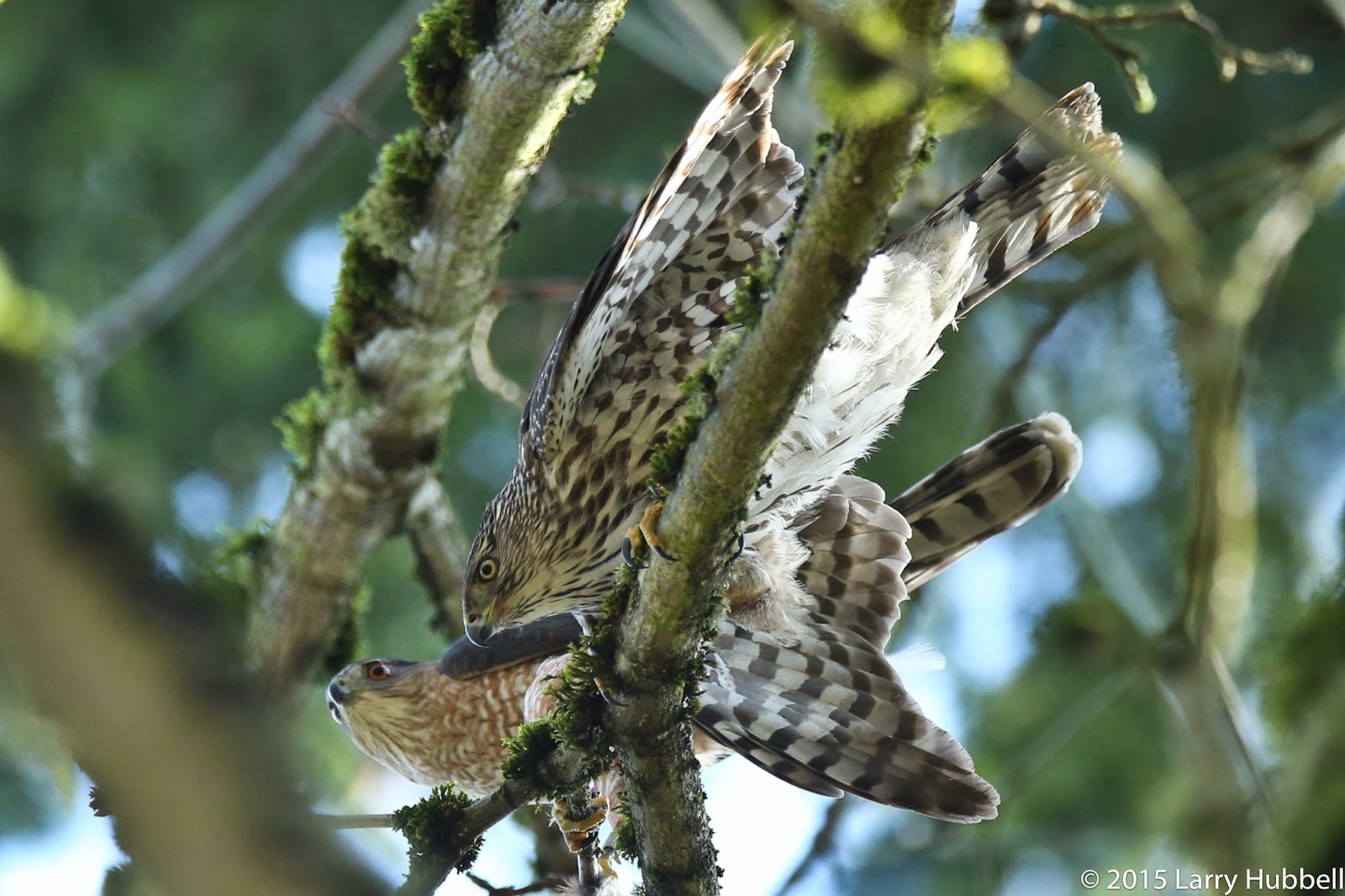 The male pauses, briefly, beside the female. 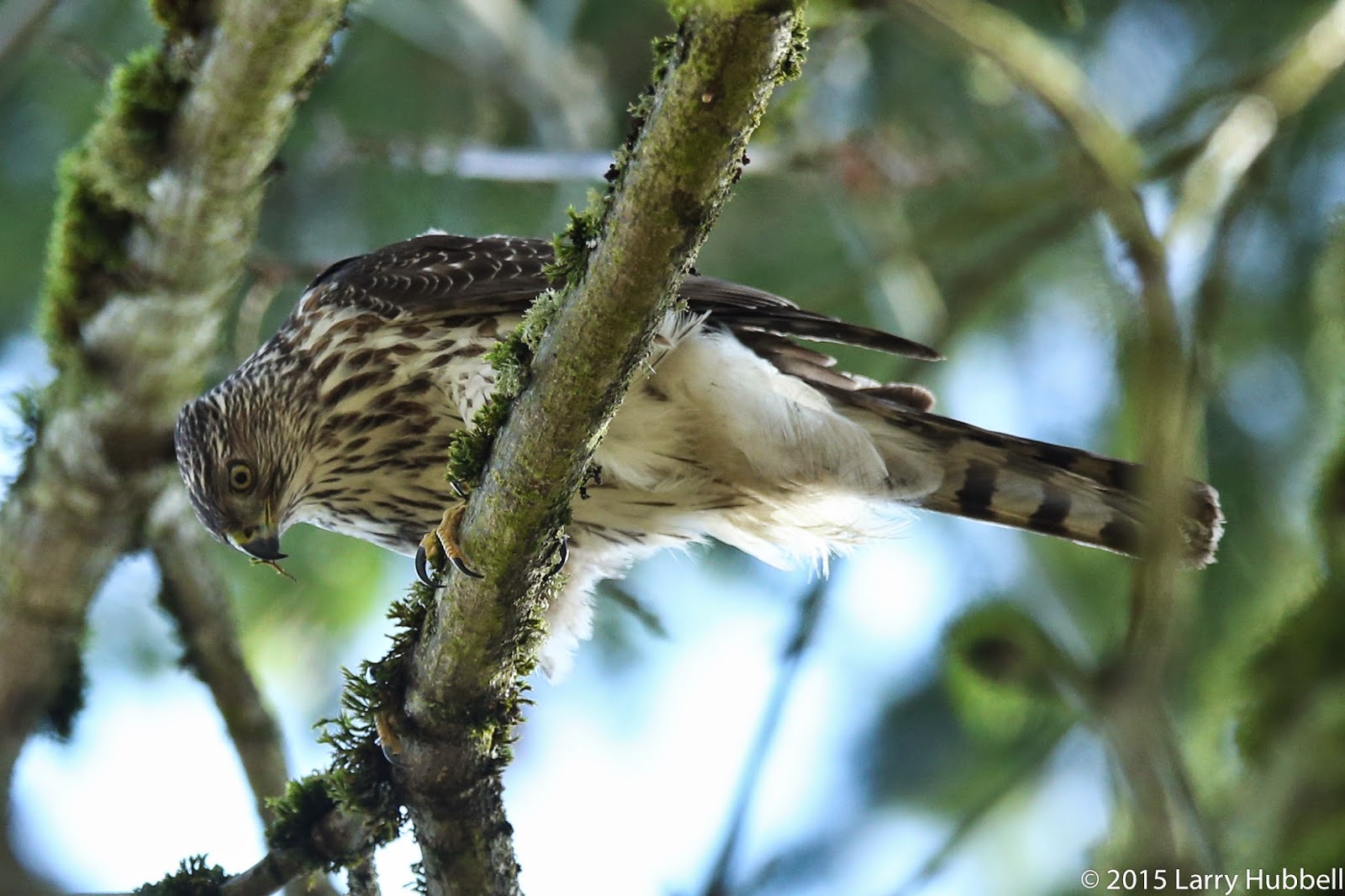 She hardly seems to notice when he has gone. 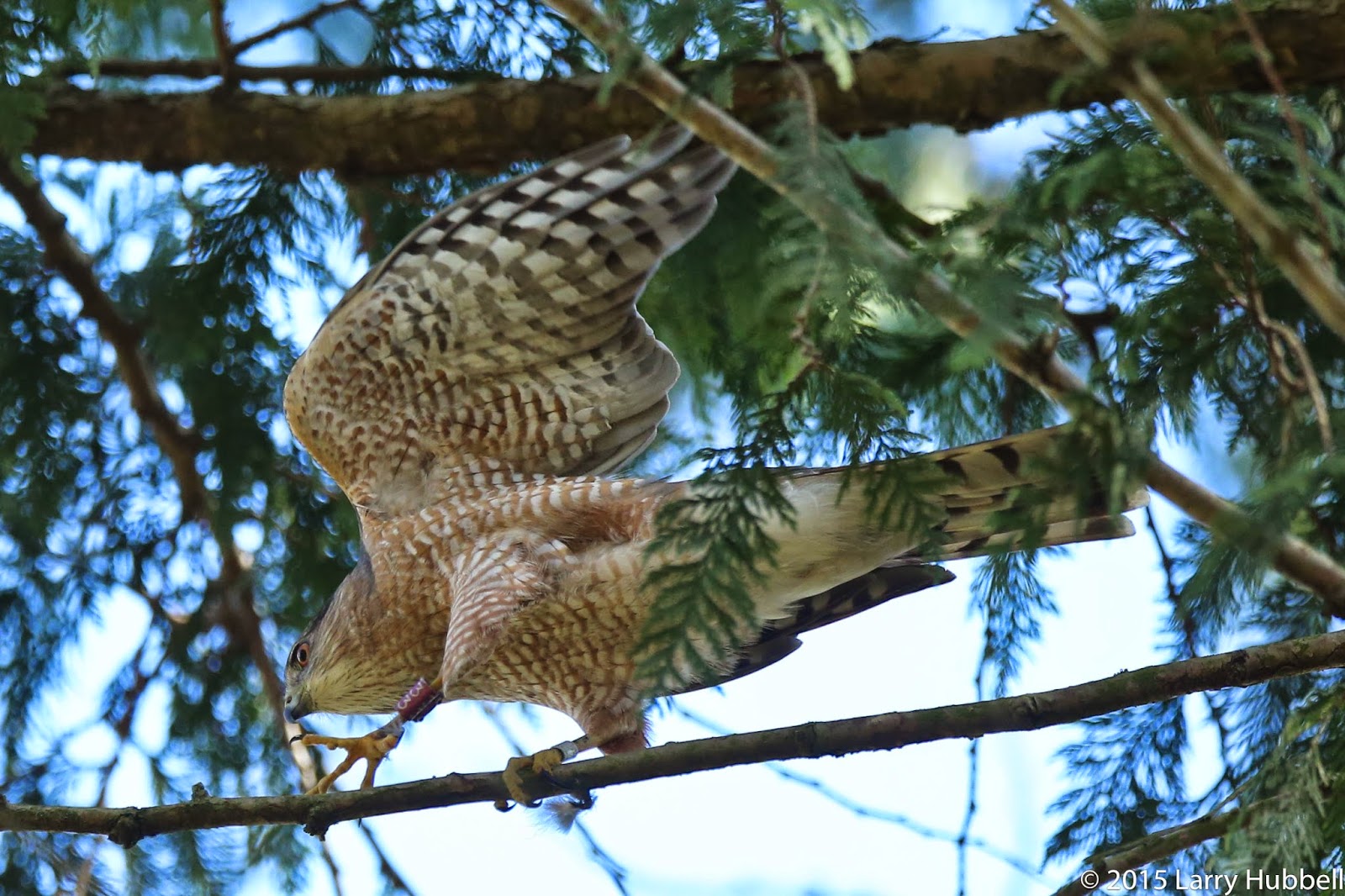 The male moves to a neighboring cedar tree and begins searching… 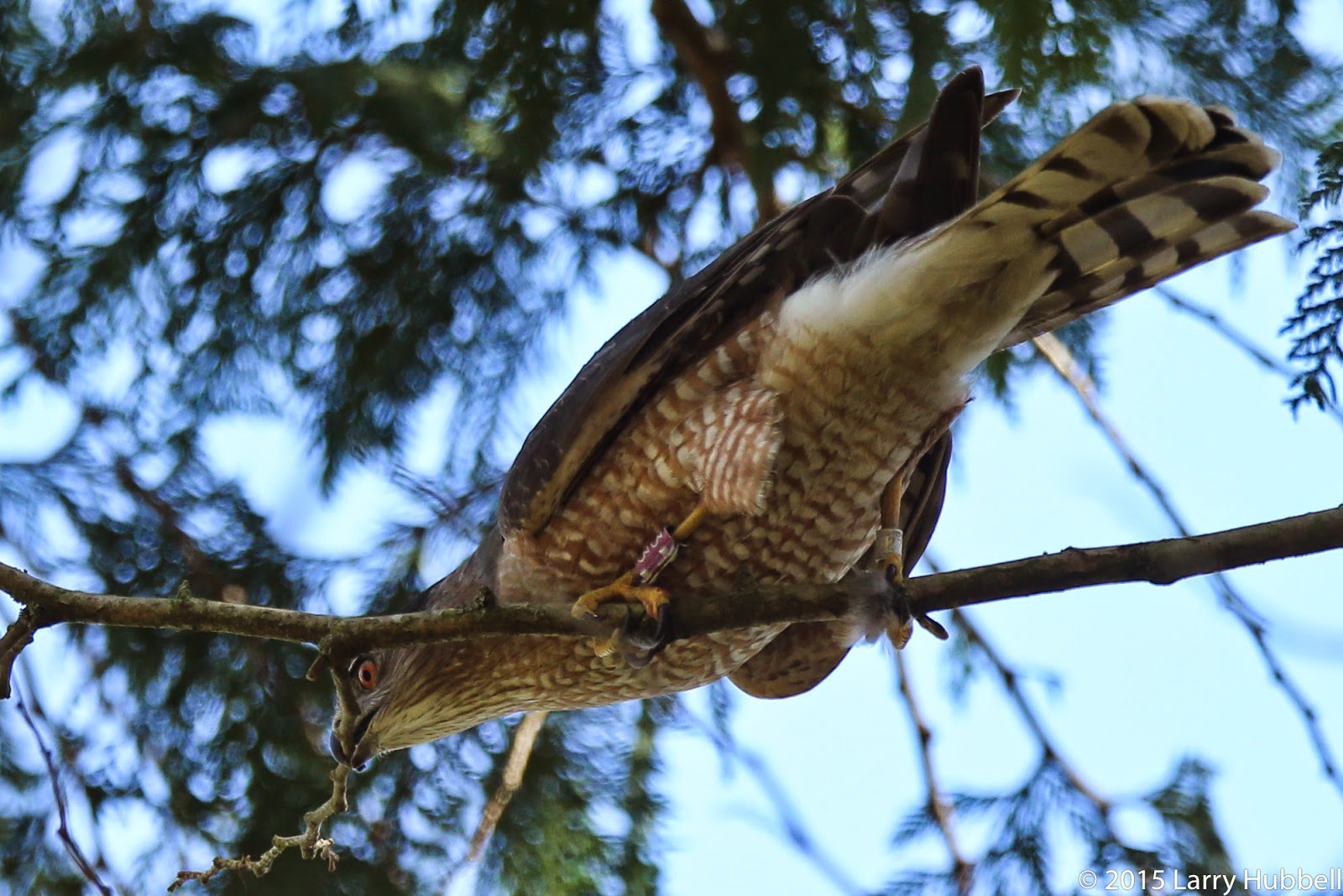 ... for nest-sized branches. If you zoom in on his right talon you can see he is still carrying a tuft of her feathers. In five minutes the male leaves the area. 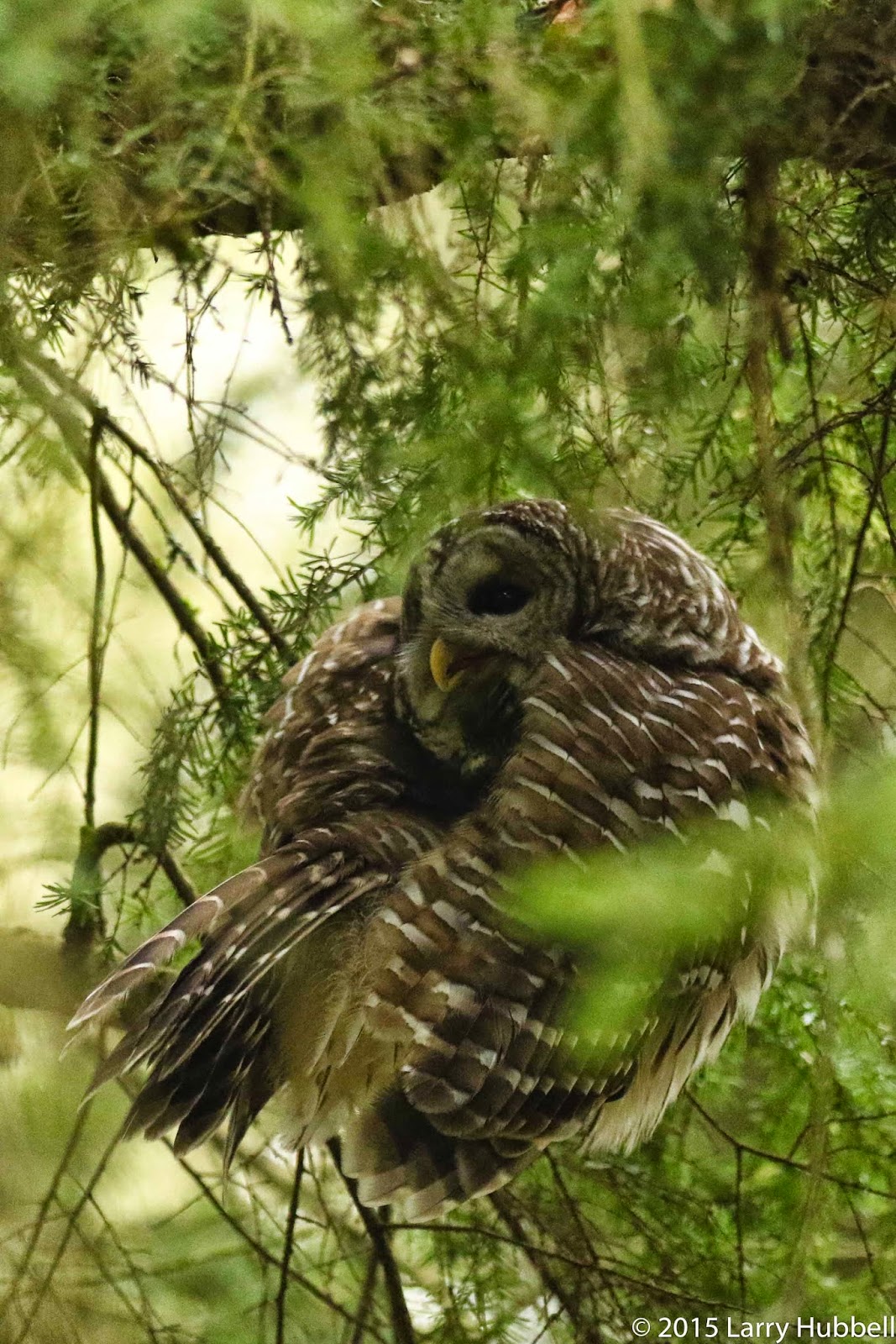 Earlier this week, below the nesting site of the cooper's hawks, a barred owl was attempting to sleep its way through the day, when... 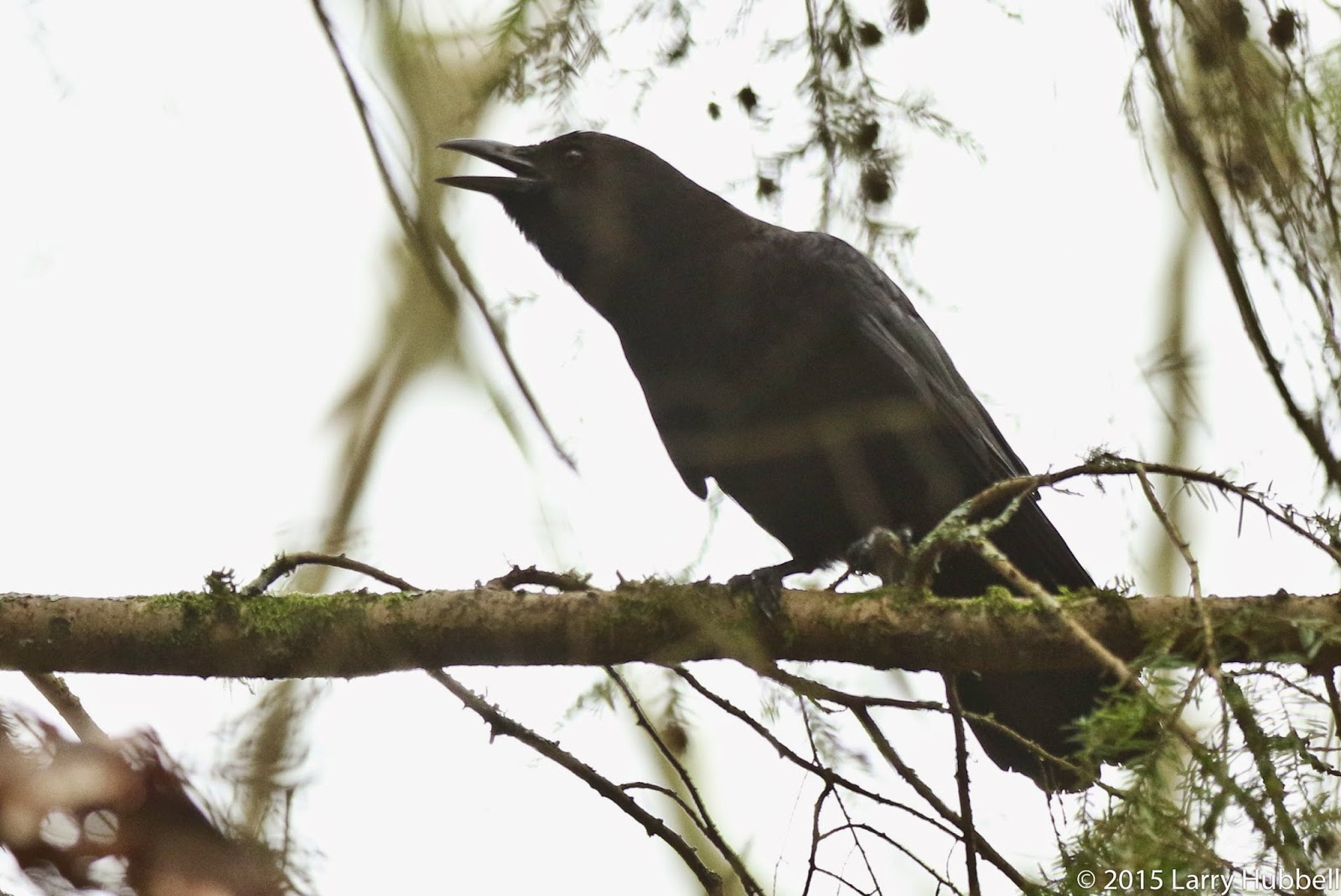 …three crows flew in and began "cawing", loudly. There does not seem to be many creatures that can intimidate crows. The owl turned its head away and tried to ignore them. Suddenly, I heard the "kekking" of a cooper's hawk. 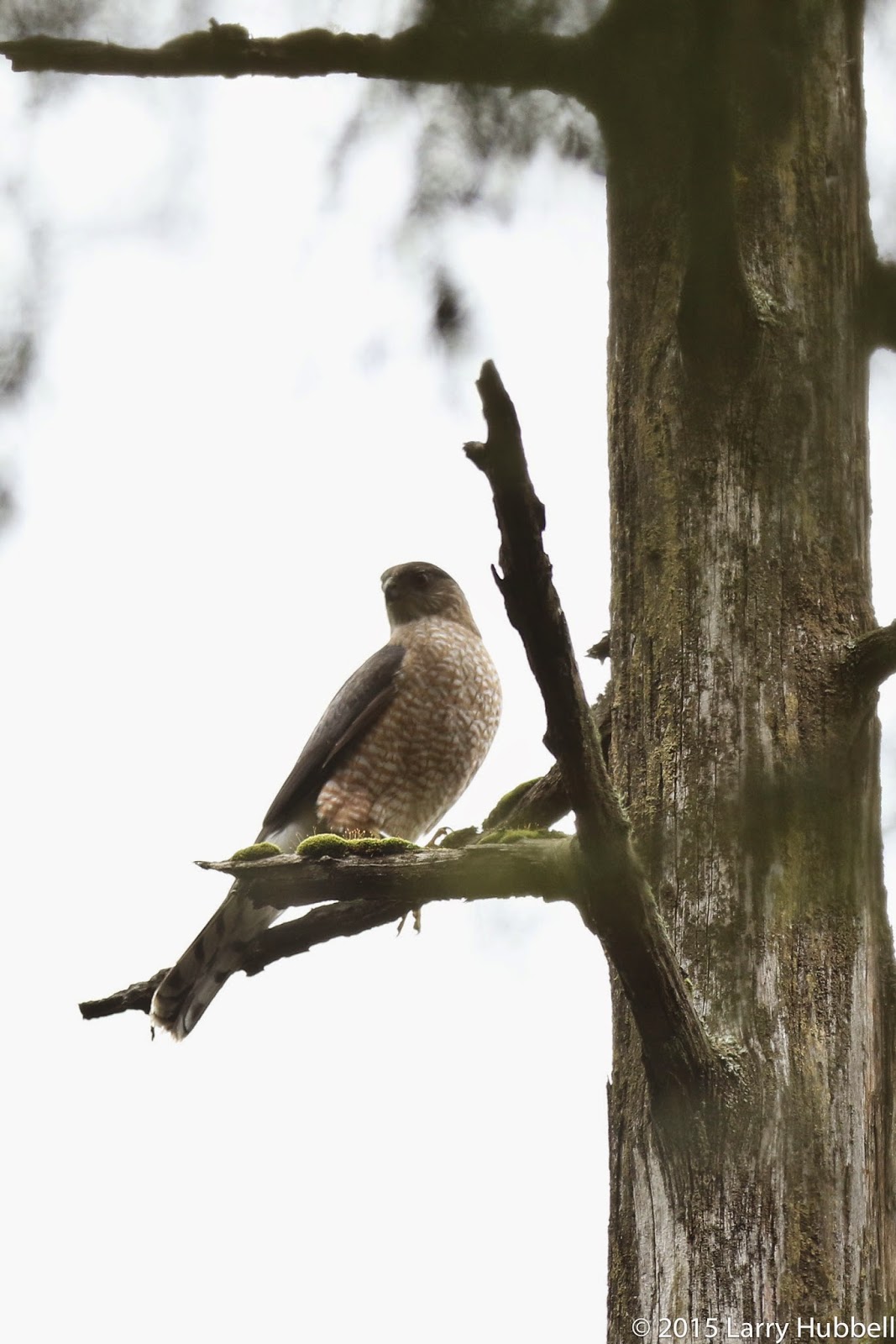 This male, most likely the one we have been watching in the last two posts, landed just above the owl and the crows. Not only were the crows instantly quiet, they seemed to evaporate, as well. When I looked up, the crows were gone. The hawk went on about its business and the owl went back to sleep. Defending the nesting territory, is evidently, another role in the mating game.

Note: To read some very informative corrections to this story, from Martin Muller, please read the update section at the end of the post called, Masters of Deception. (4-16-2015)

Sasha from the University of Washington Botanic Gardens asked me to let you know that Connie Sidles is teaching this very special birding class in April. 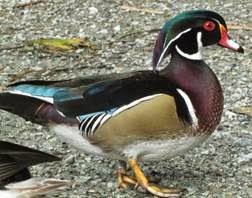 Union Bay Natural Area (aka Montlake Fill) hosts some 259 different species of birds, everything from the largest swans (with wingspans of 7 feet) to the tiniest songbirds (bushtits, with a wingspan of 6 inches). Some of our birds are so dull they have almost no color at all, though their voices can be very sweet (warbling vireos are a good example). Other birds croak like frogs but glisten like gems (wood ducks). Where did this spectacular diversity come from? The short answer is: from dinosaurs. The long answer is: 150 million years of evolution.

Master birder Connie Sidles describes the latest discoveries of fossil birds and their ancestors, and the most current theories about how birds have evolved from the distant past. Sidles studied paleontology at the University of Chicago and has written four books about nature as she observes it at Montlake Fill.

Posted by Larry Hubbell at 1:15 PM