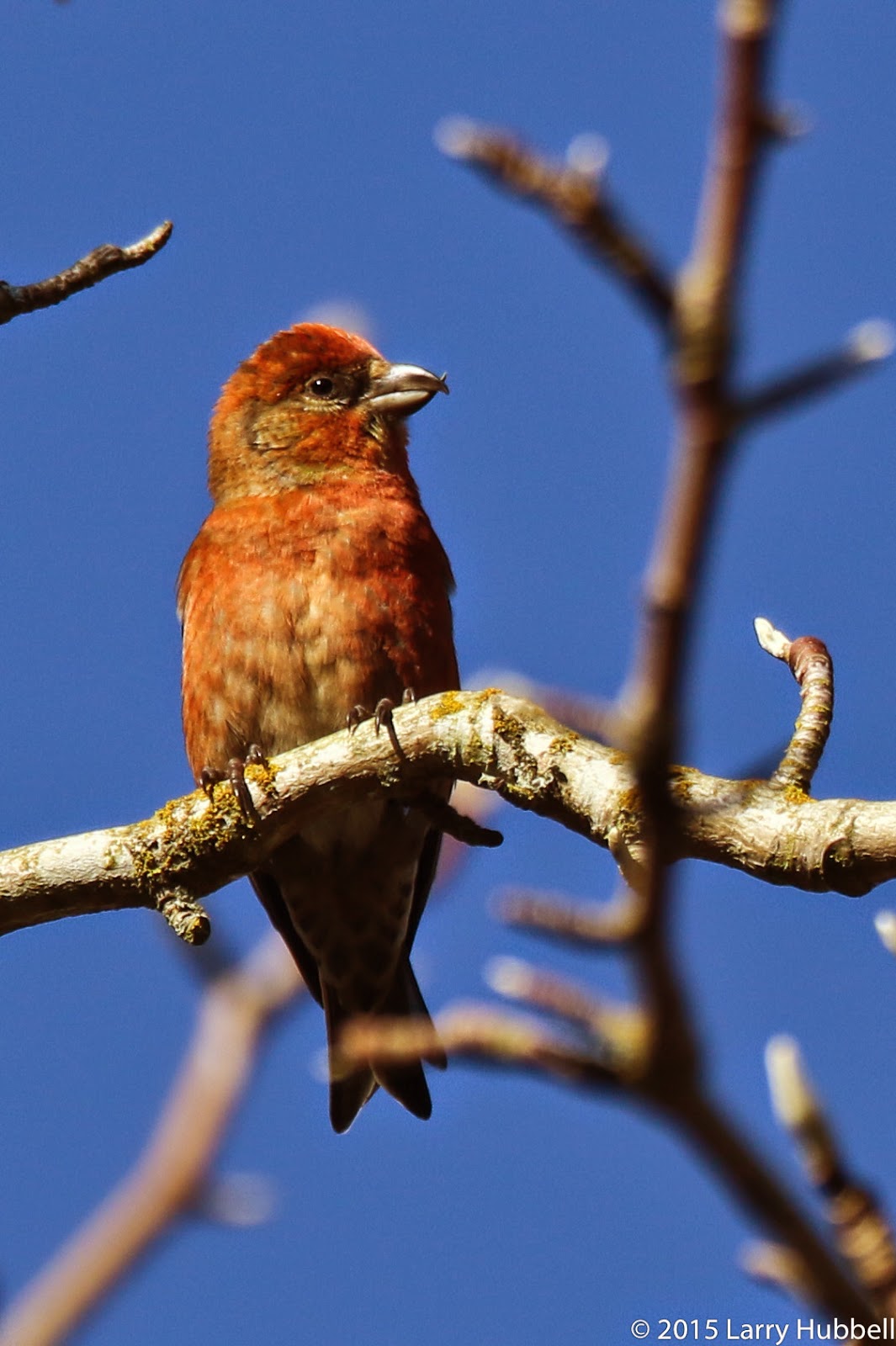 The name red crossbill is an obvious fit, when looking at this male bird. The red crossbill's scientific name is Loxia curvirostra. 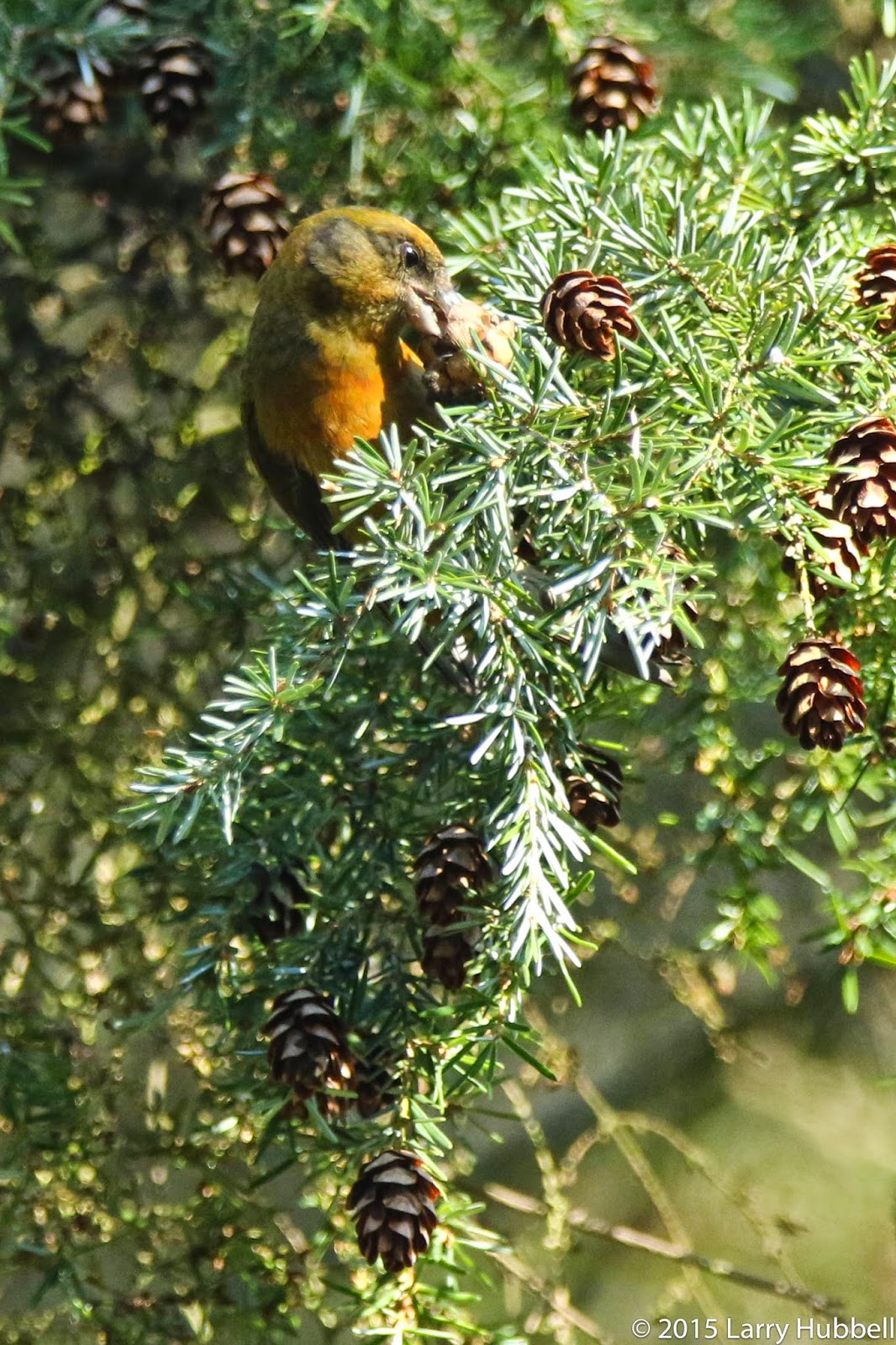 The females also have a crossed bill, but more of a yellow-green color. The website, All About Birds, implies that crossbills will reproduce at any time of year, when ever and where ever they find an adequate supply of cones and seeds. 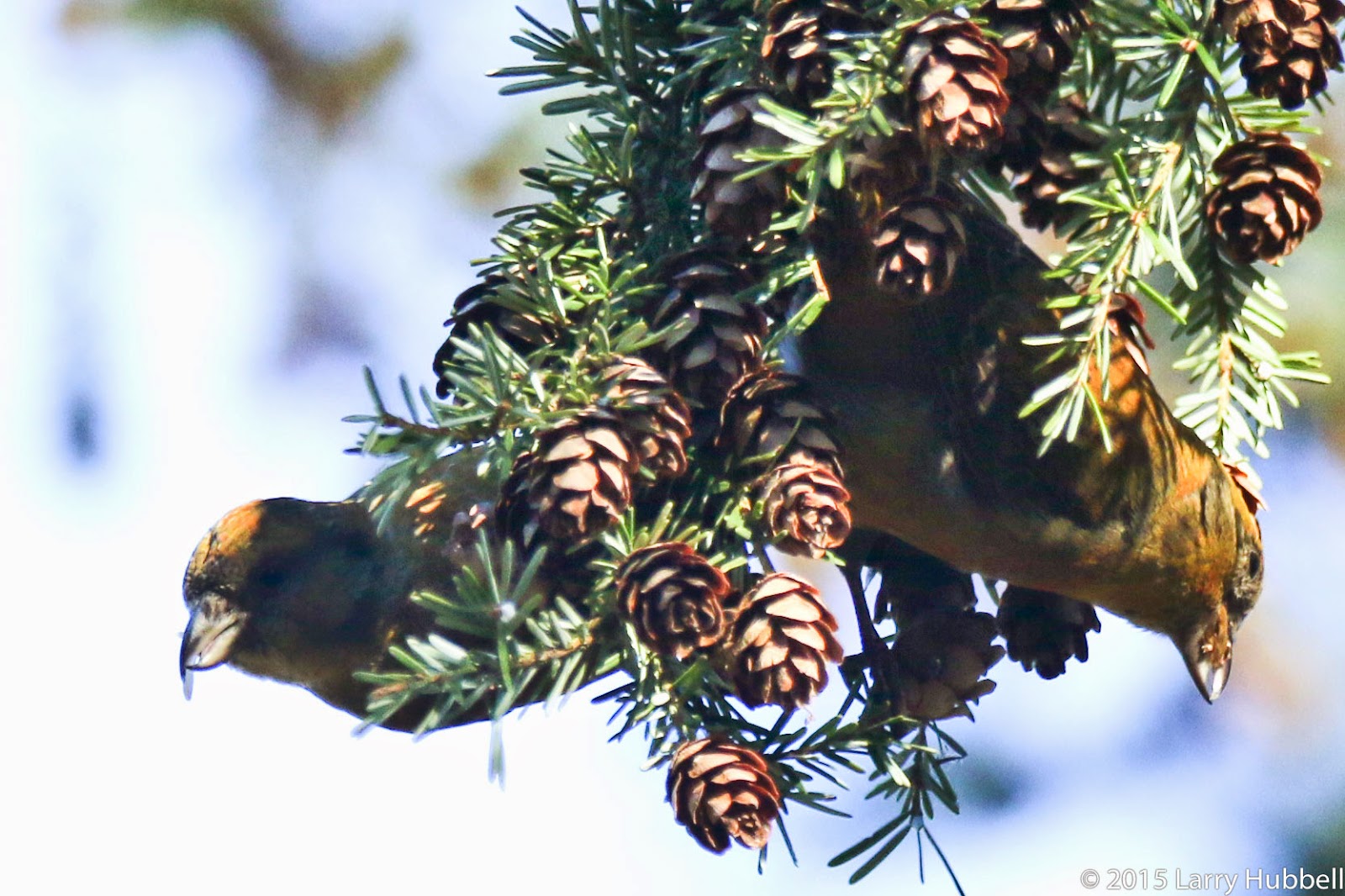 These crossbills were found last week in the Arboretum. The morning air was cool and crisp as the birds silently searched for seeds in a western hemlock. The tree's scientific name is Tsuga heterophyllia. Given how quietly the birds worked, the key to finding them was the carpet of cones covering Arboretum Drive. 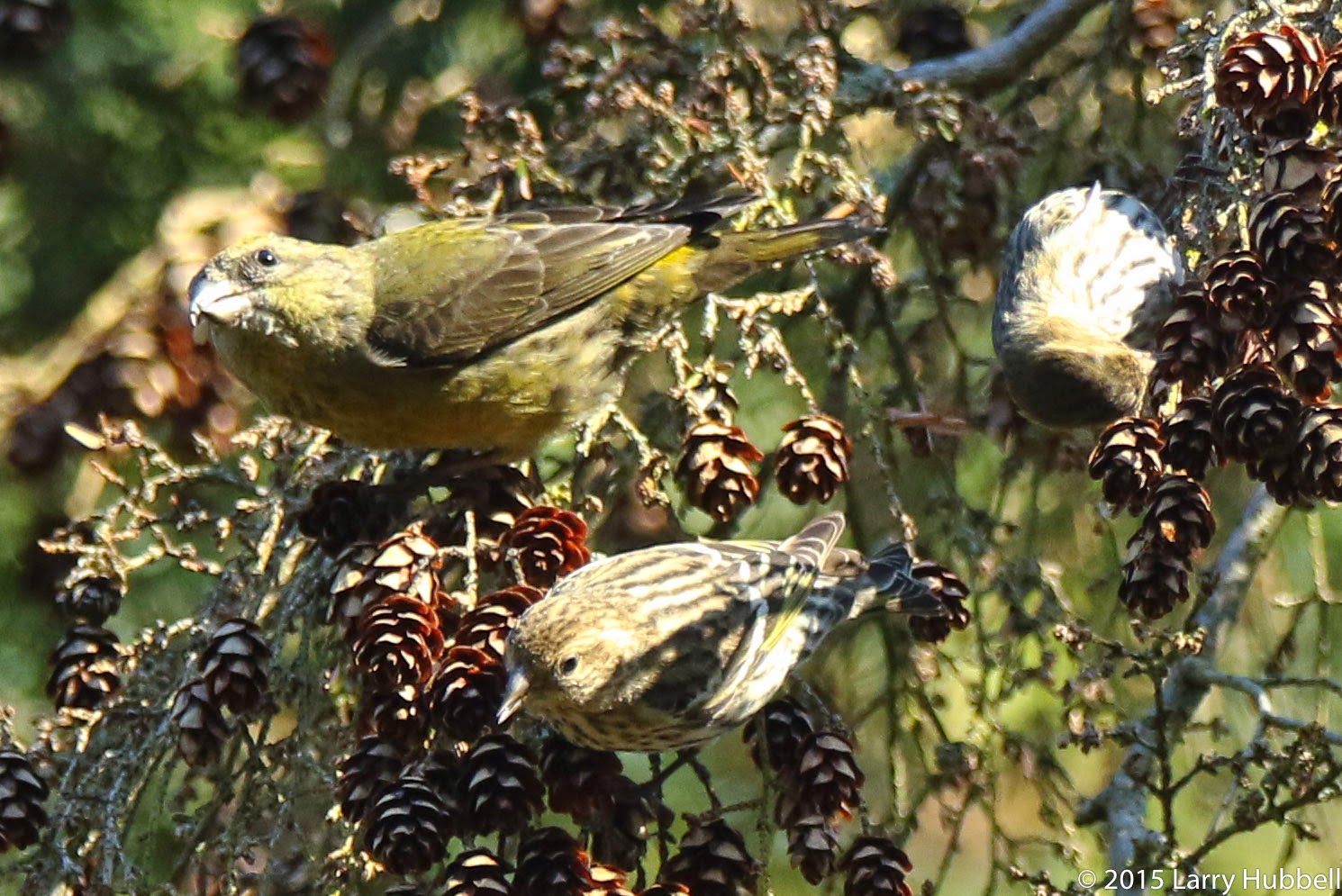 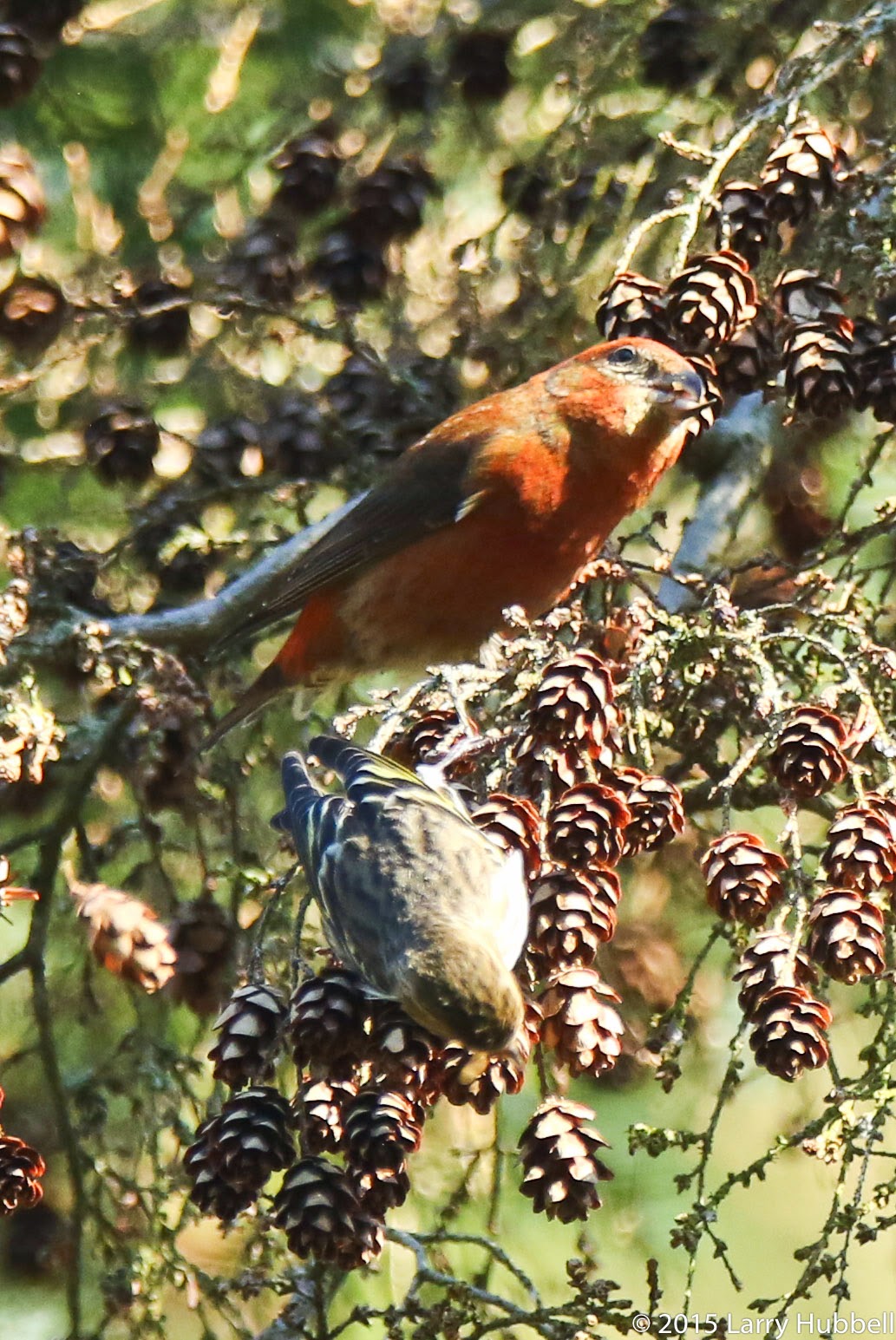 The efficiency of the crossbill beaks may explain why the two birds can feed in the same trees, get the same amount of nourishment from the seeds and yet the crossbills grow to be more than twice as large as the siskins. Crossbills and siskins are usually found near the tops of coniferous trees, where the greatest quantity of cones grow. 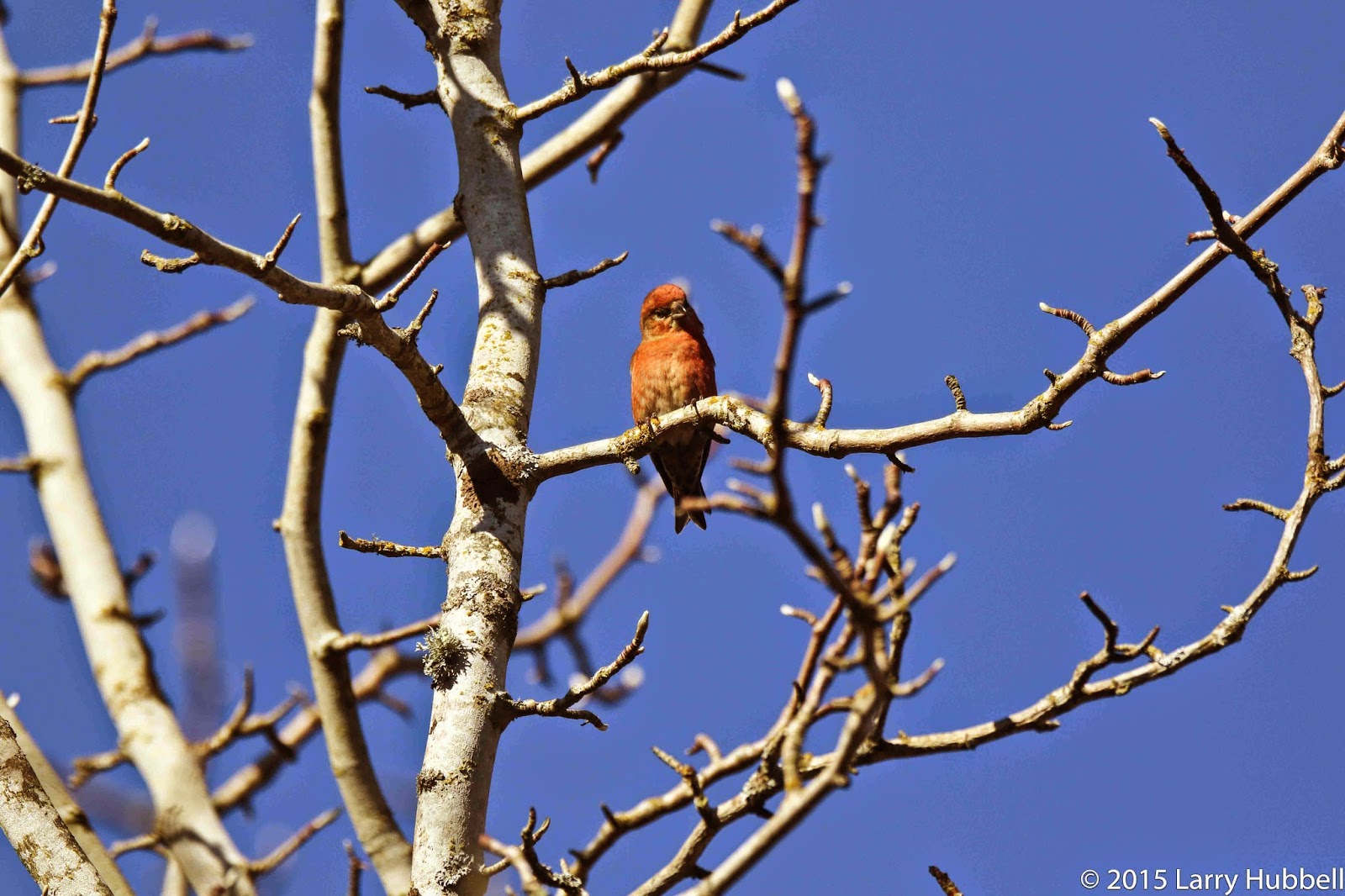 In this case, after feeding in the hemlock tree, the crossbills surprisingly chose to rest in the top of this deciduous, e.g. cone less, magnolia tree, Magnolia acuminata. 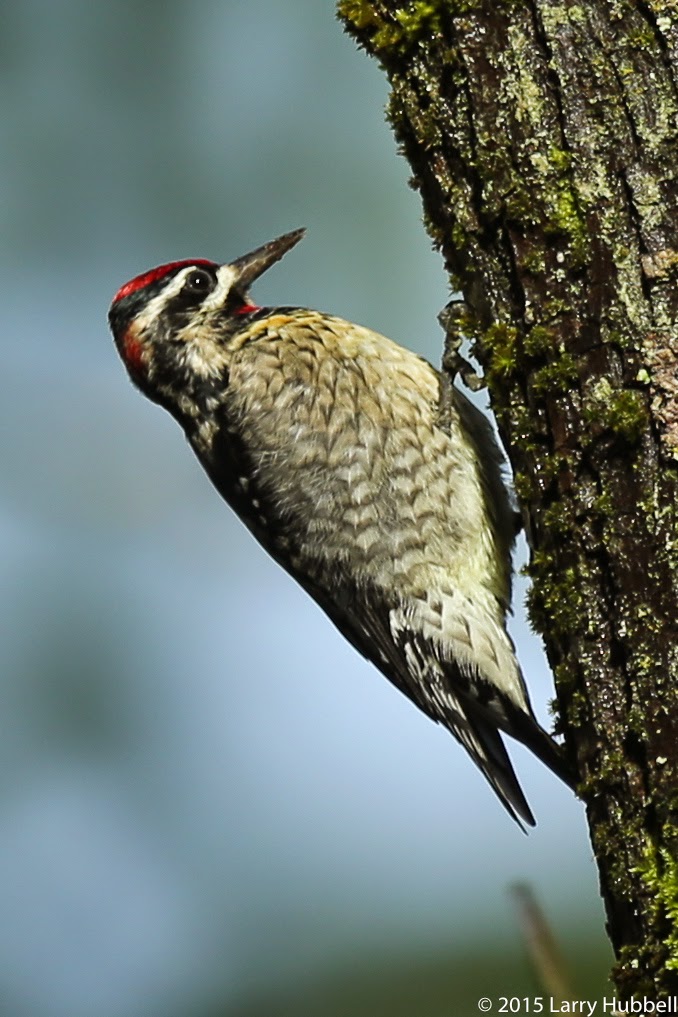 Further south in the Arboretum, this red-naped sapsucker seems to feed exclusively on sap from a single spanish fir tree, Abies pinsapo. Searching this big-leafed maple, Acer macrophyllum, for insects was the first attempt to vary its diet that I have observed. The scientific name for the red-naped sapsucker is Sphyrapicus nuchalis. 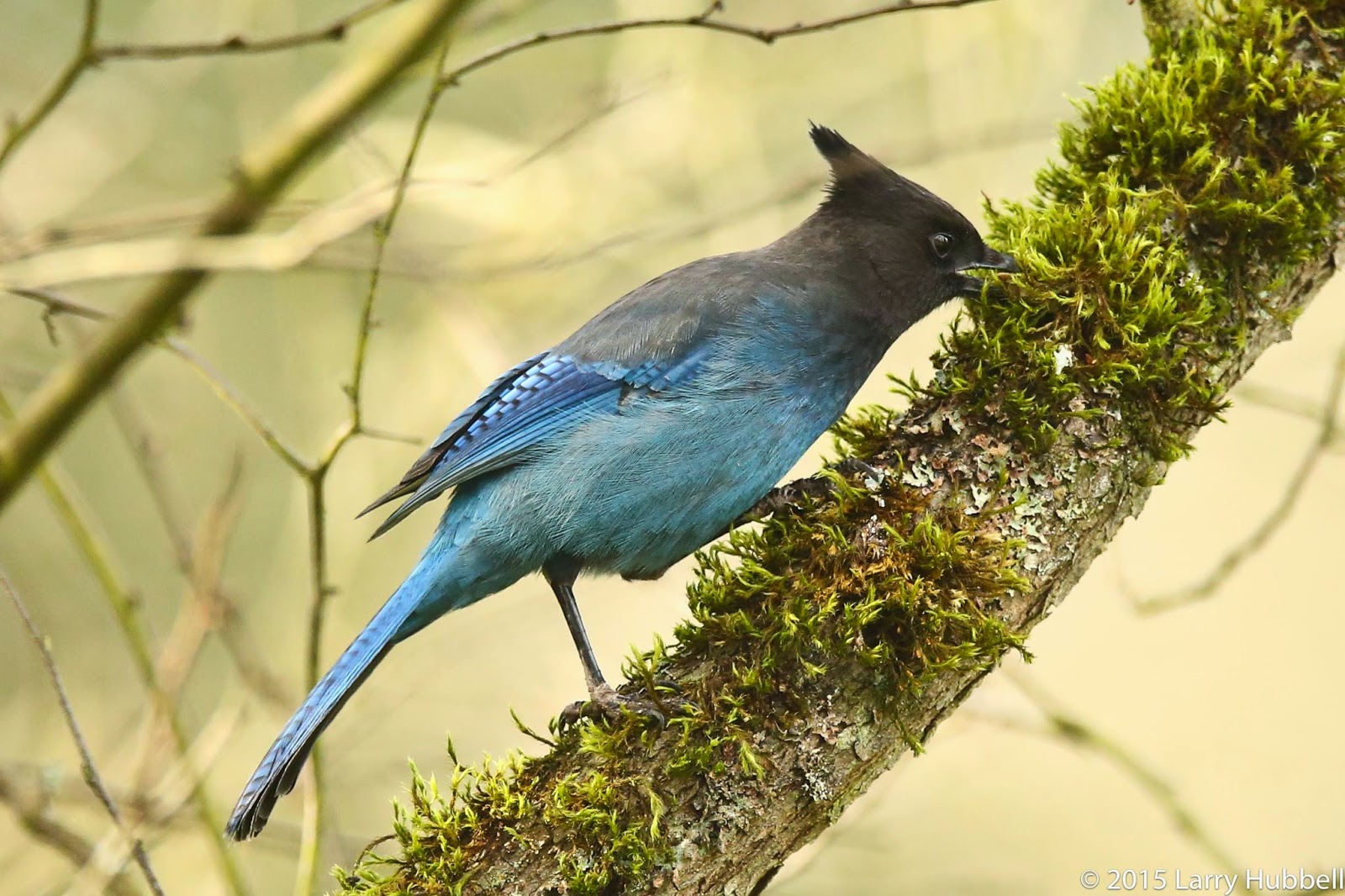 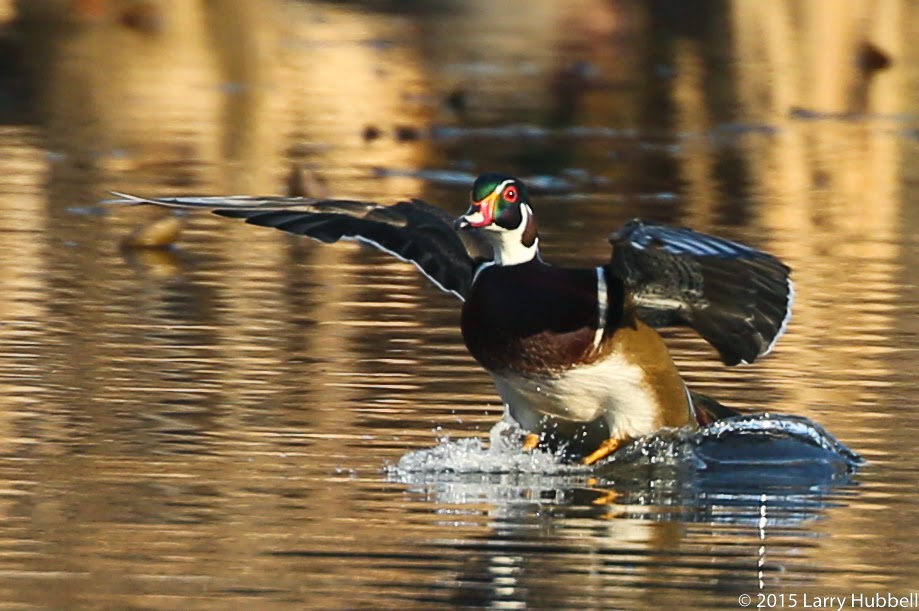 On Duck Bay, a wood duck, Aix sponsa, demonstrated how the idea of water skiing was most likely inspired. 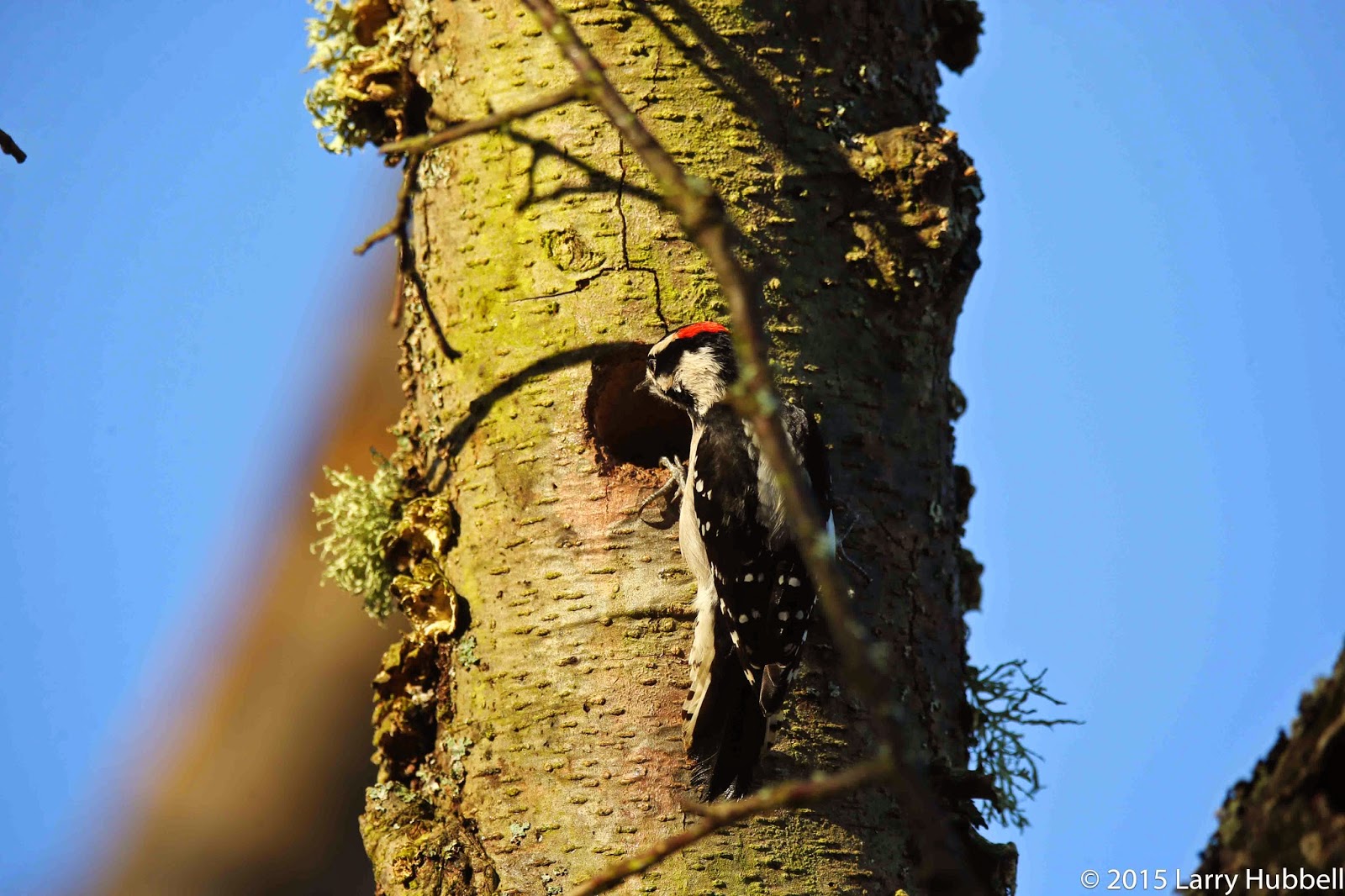 Next to Duck Bay, a male downy woodpecker checks out last year's nest, in what is left of this red alder. Given the location, this is most likely the same male seen in last week's post. The scientific name for the downy is Picoides pubescent, the name for the red alder is Alnus rubra. 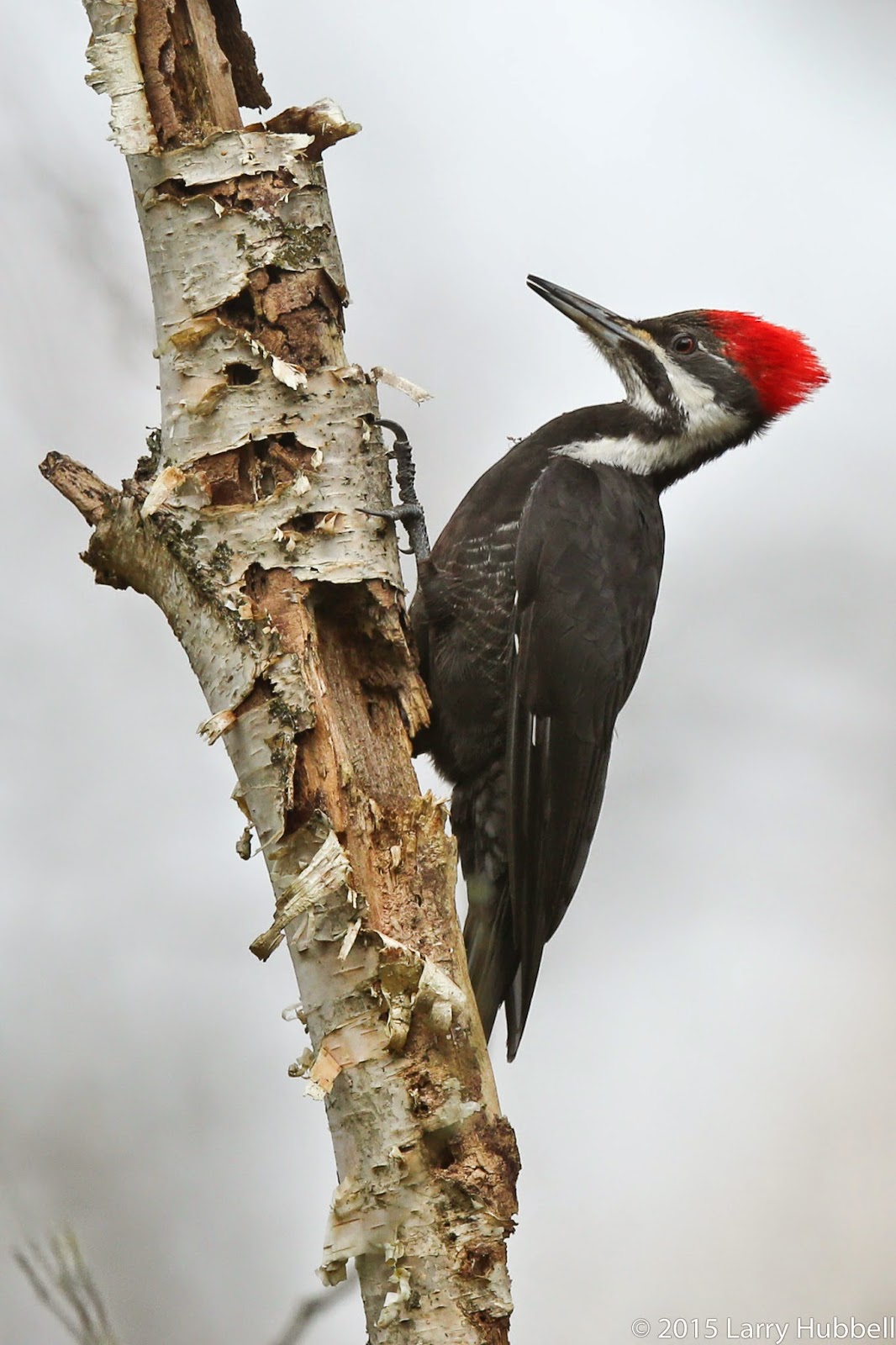 Last Saturday on Foster Island, a female pileated woodpecker searched for insects on this standing snag, which was once a white birch tree. The scientific name for the pileated is Dryocopus pileatus, for the paperbark birch it is Betula papyrifera.

Thank you to Kathy for pointing out this bird! 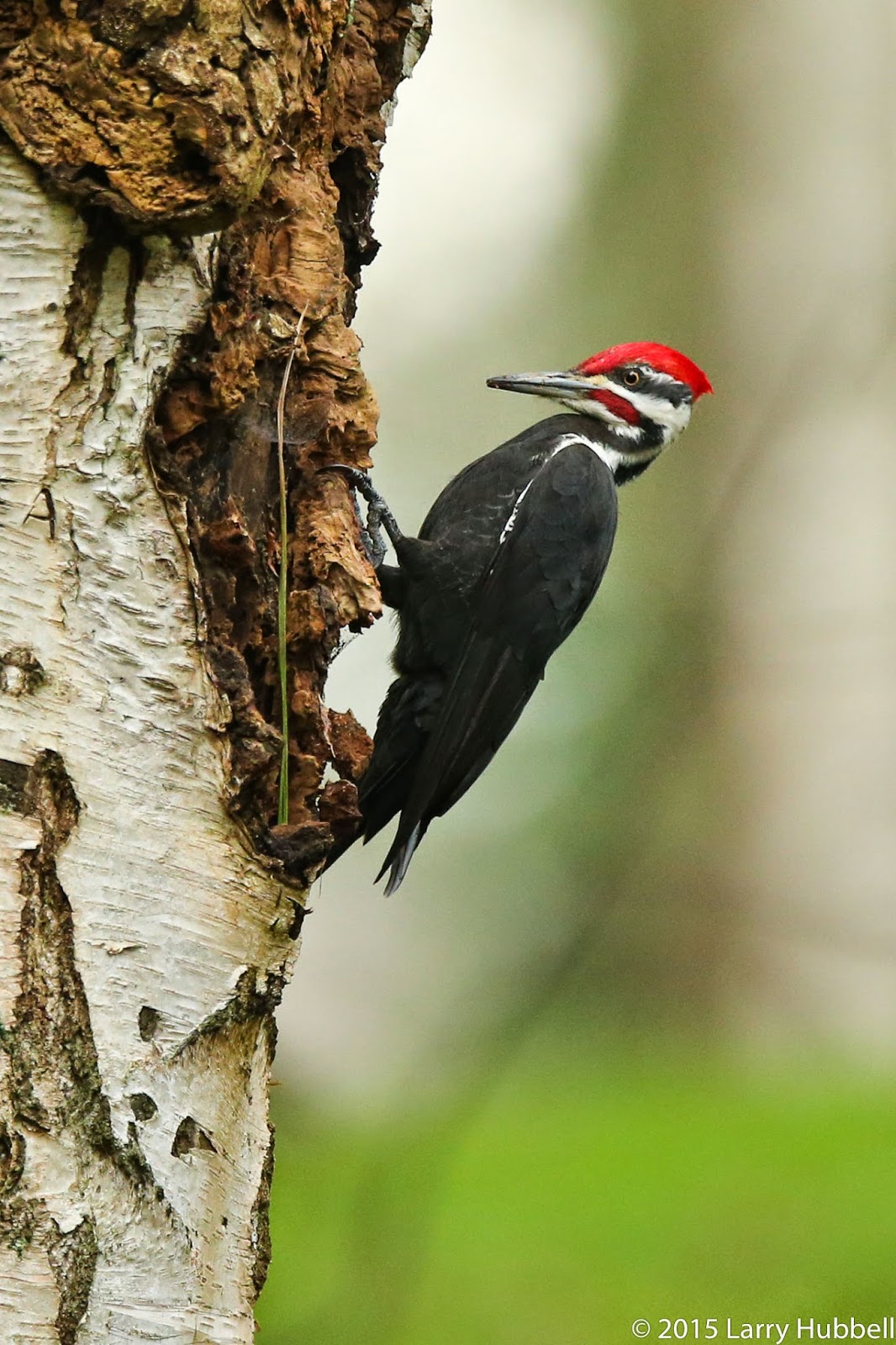 It was only a short time until the male pileated, most likely Elvis, announced his arrival with his loud and proud call. In the near future the female will start spending her days sitting on eggs in the nest. The timing will be obvious, when we start seeing the male searching for food alone, we will know the nesting has begun. 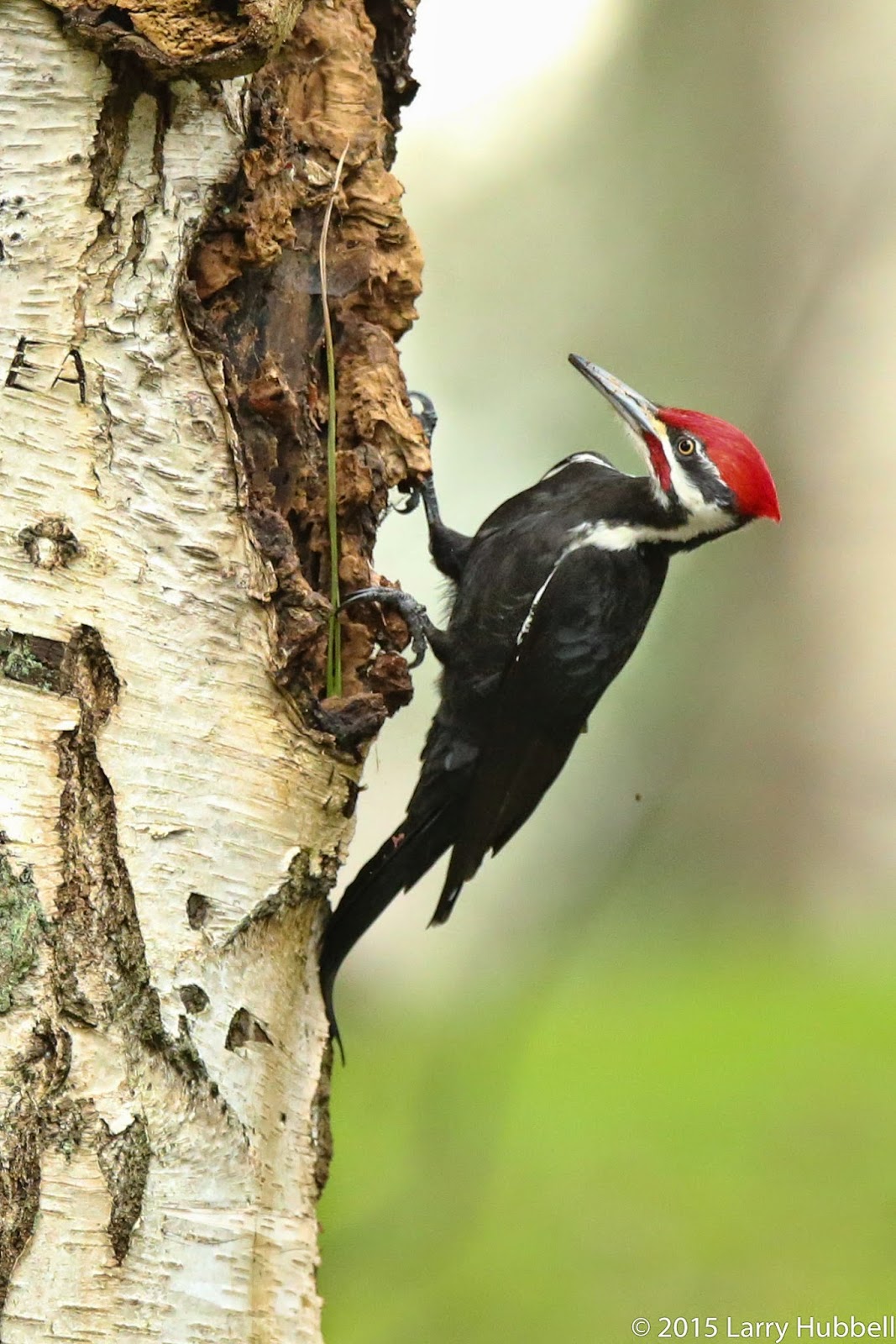 The two woodpeckers spent over an hour working the trees and snags on both sides of Cottonwood Downs, the canal on the south side of Foster Island. It is wonderful for woodpeckers that the arborists leave standing dead trees in the Arboretum. If you would like to see woodpeckers in your yard, you might want to do the same. 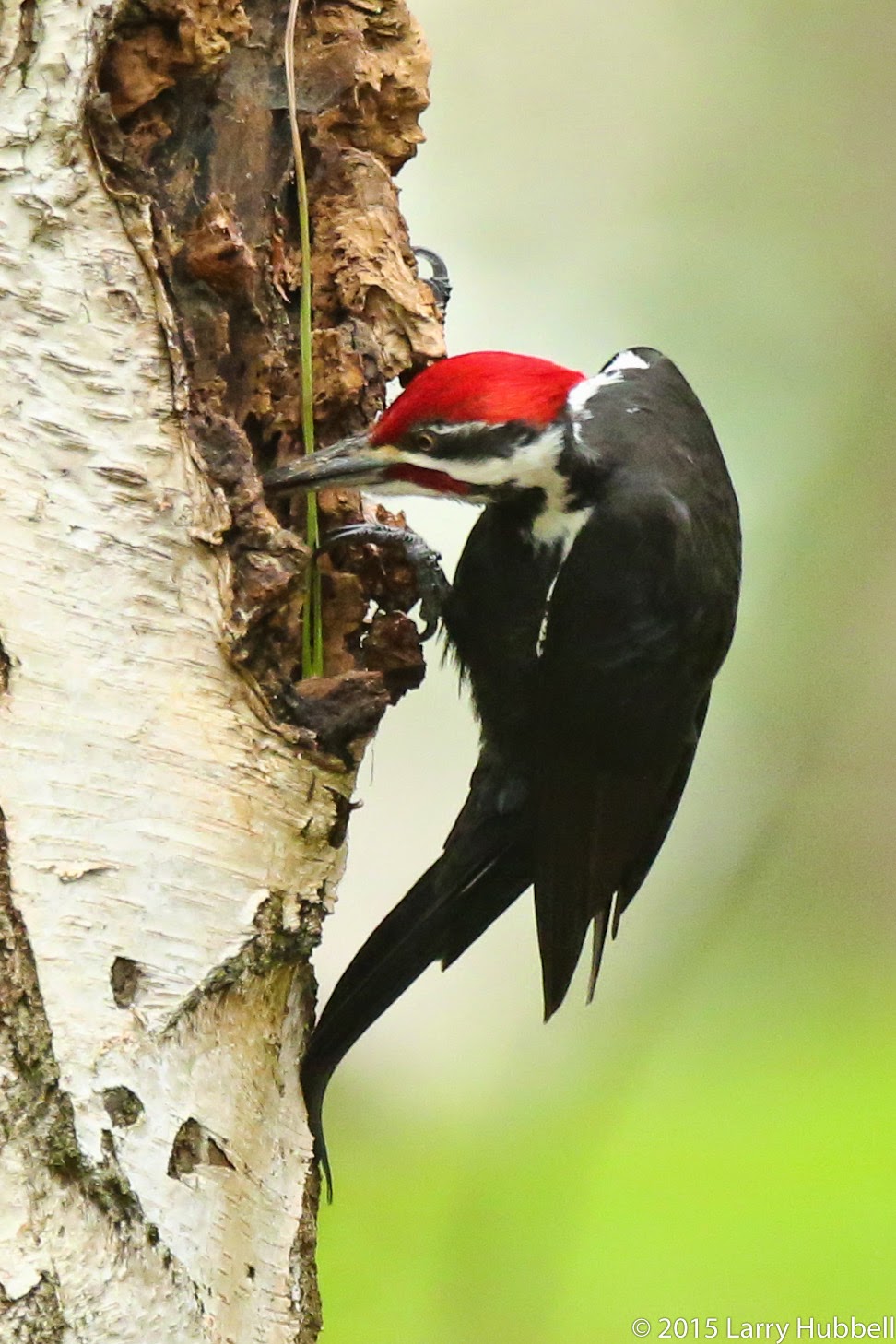 Elvis is probably more than a foot and a half long, which makes me think his shoulders could be 4 or 5 inches across. 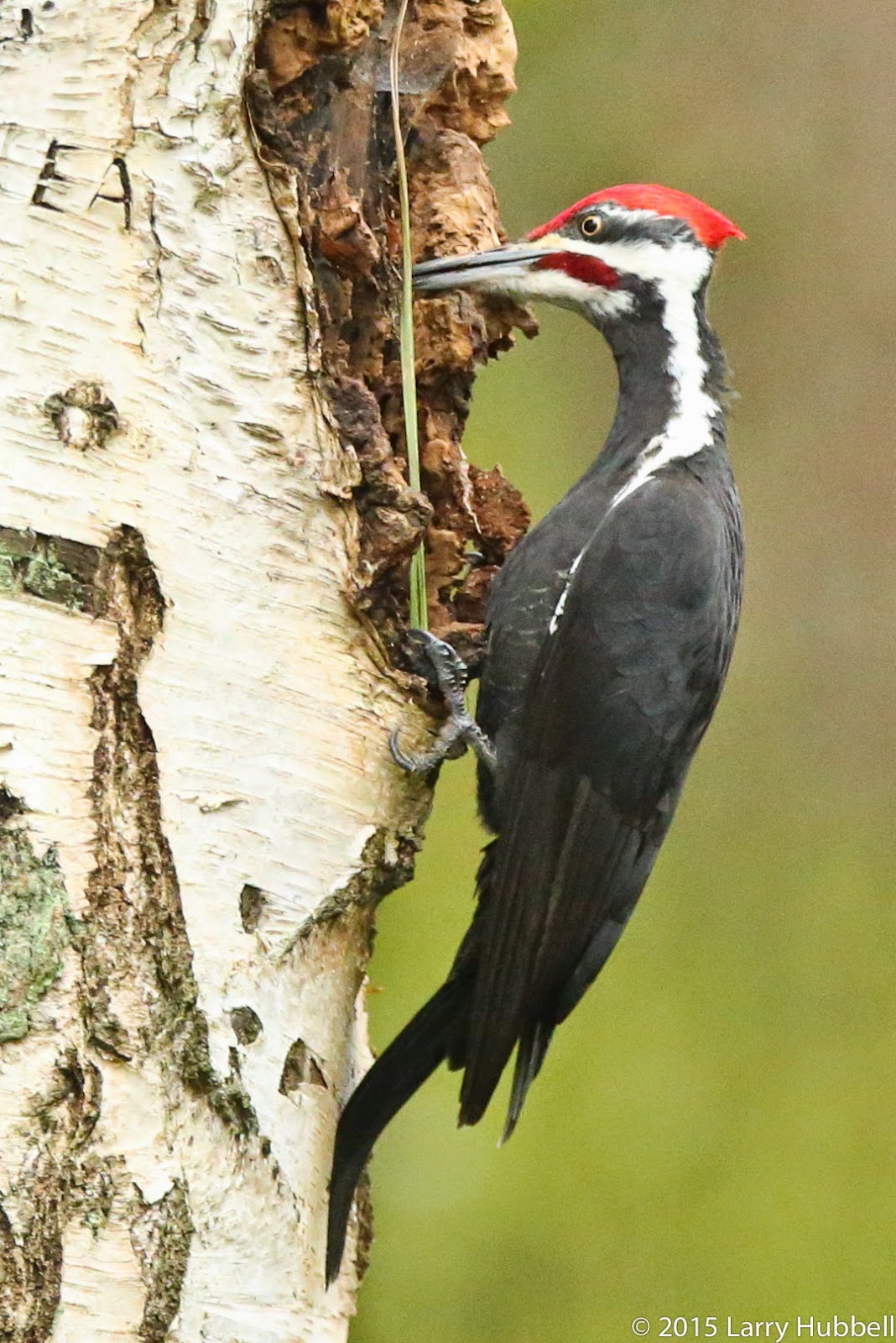 This made me wonder, How do you measure a bird? Is it when he is stretching and extended to his longest possible length or… 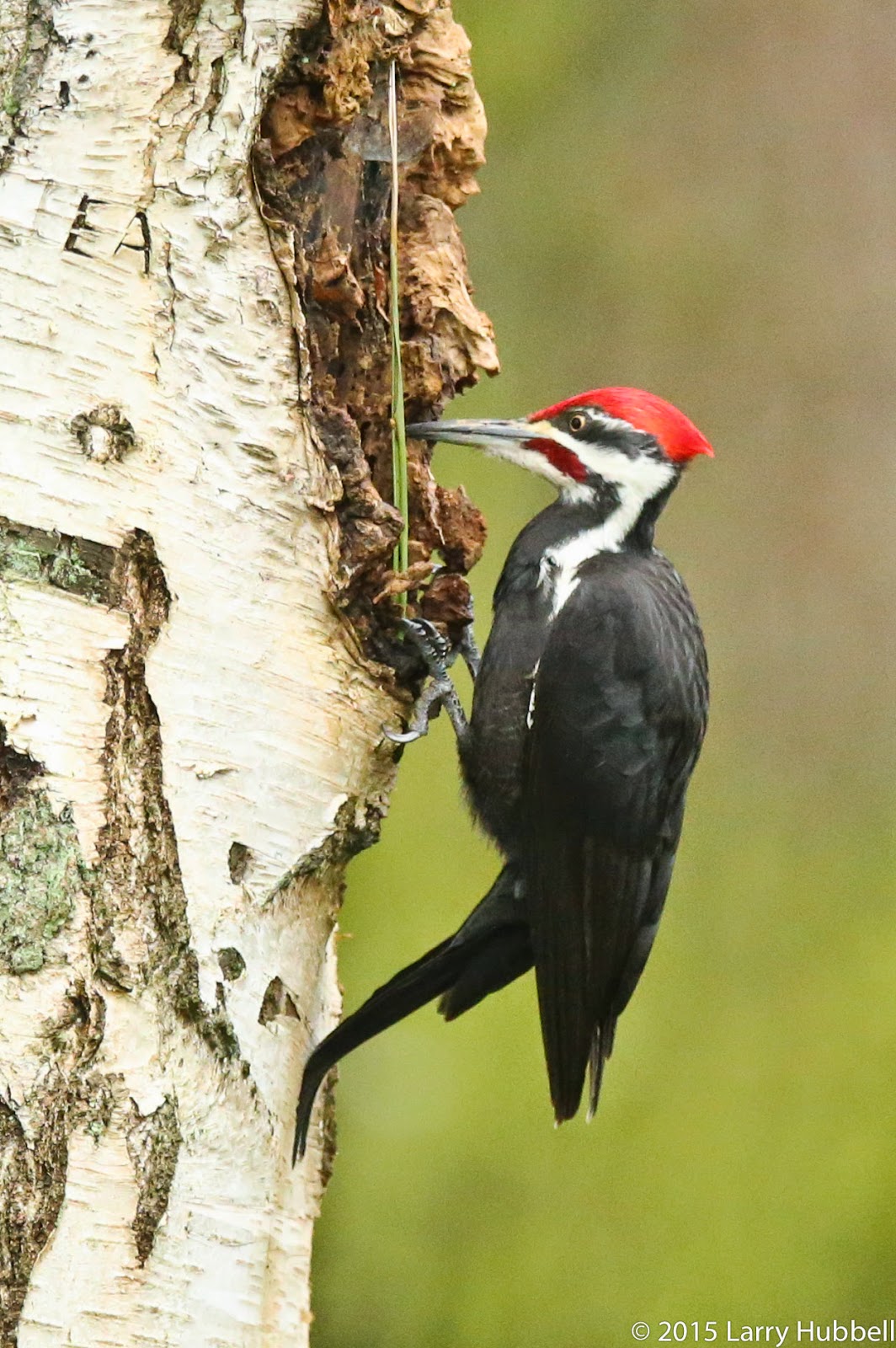 …is it a moment later, when he scrunches down to go after a tasty little treat. 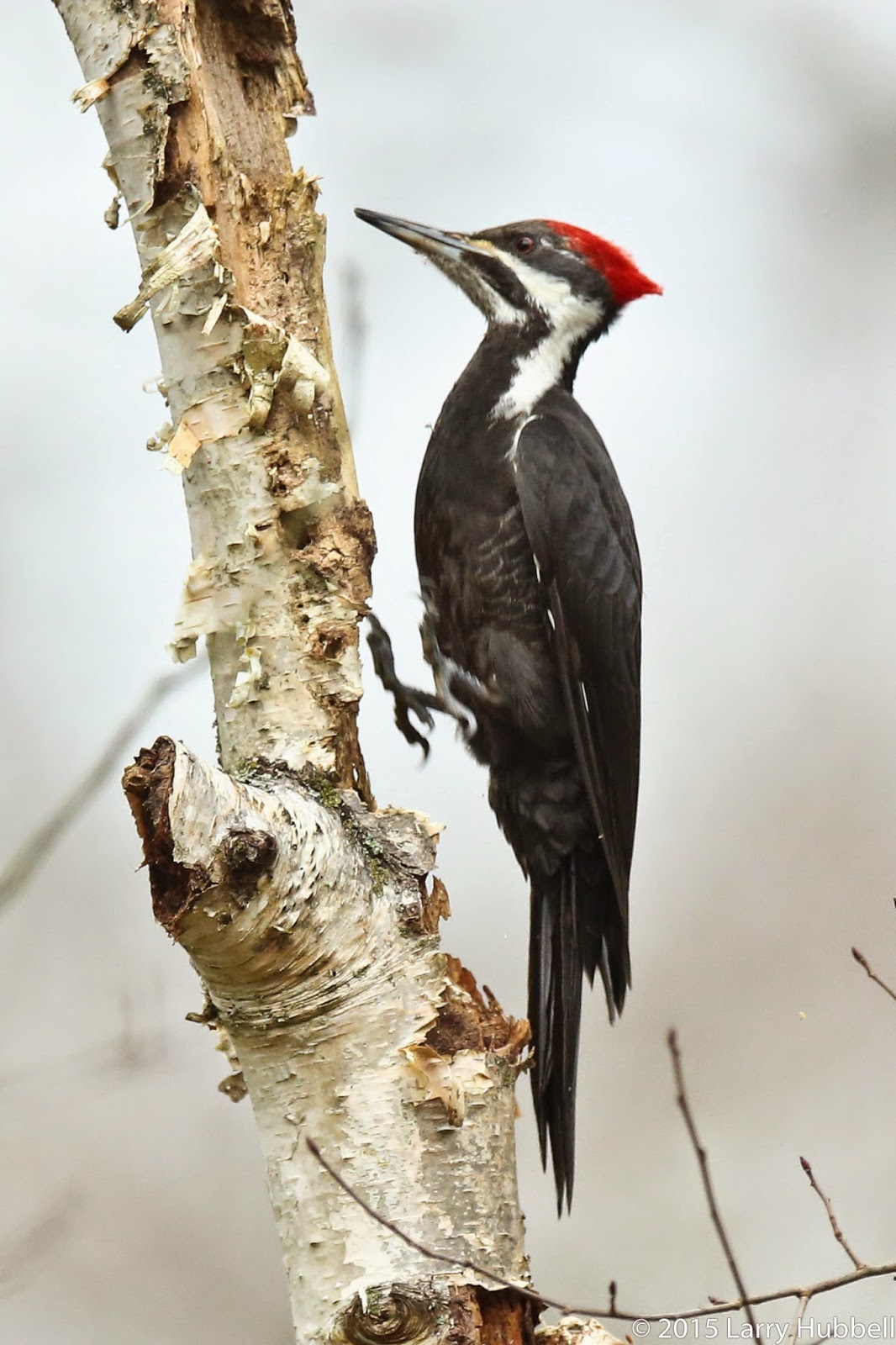 Here is one more shot of Priscilla, as she levitates up the snag. Even if she is actually using a single toe for leverage, the power-to-weight ratio of a pileated woodpecker must be incredible. 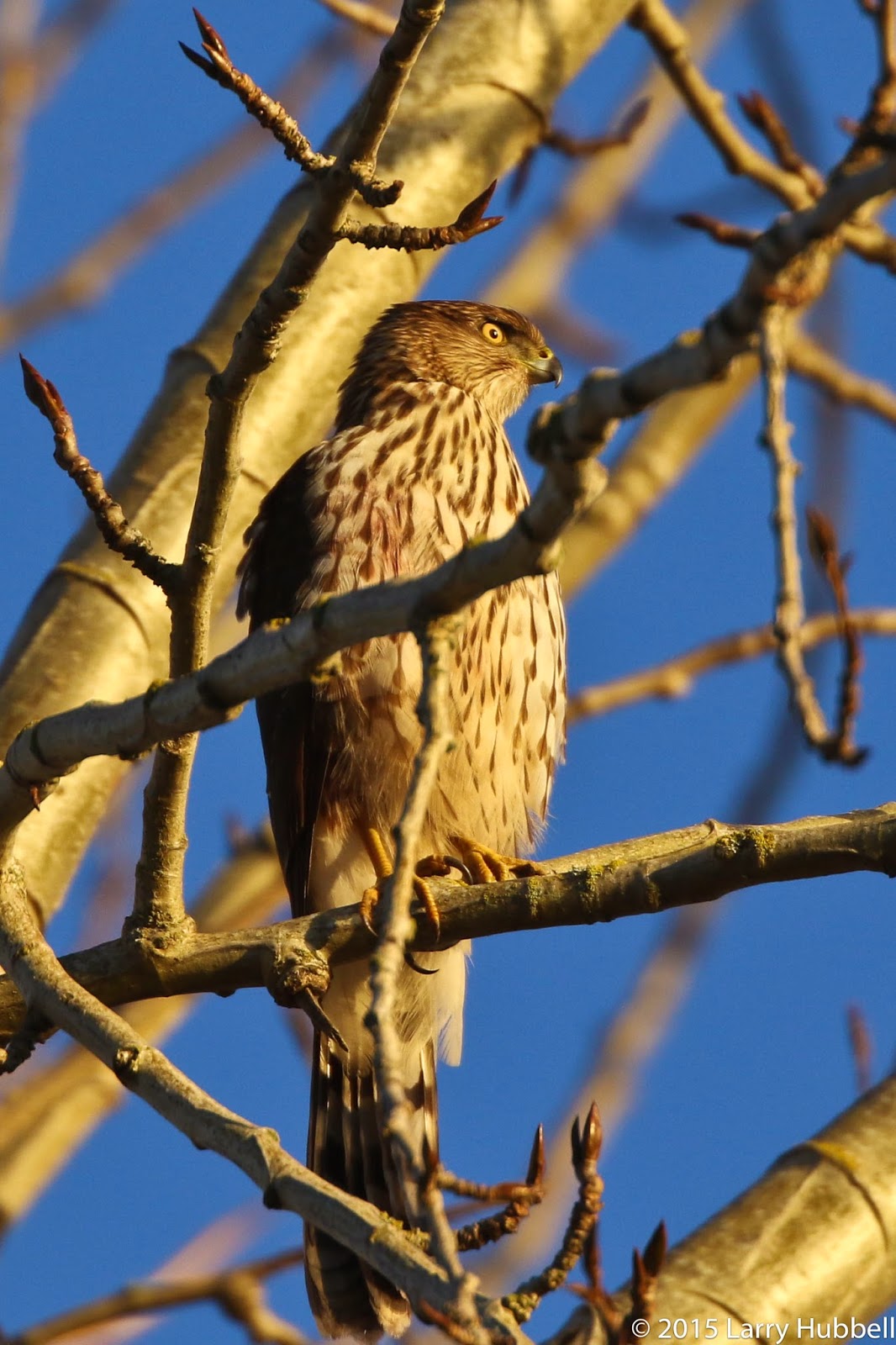 At the end of the day, this young cooper's hawk surveyed the cattails from a cottonwood tree on the southeast corner of the Union Bay Natural Area. The Latin name for this bird is the easily remembered, Accipiter cooperii. 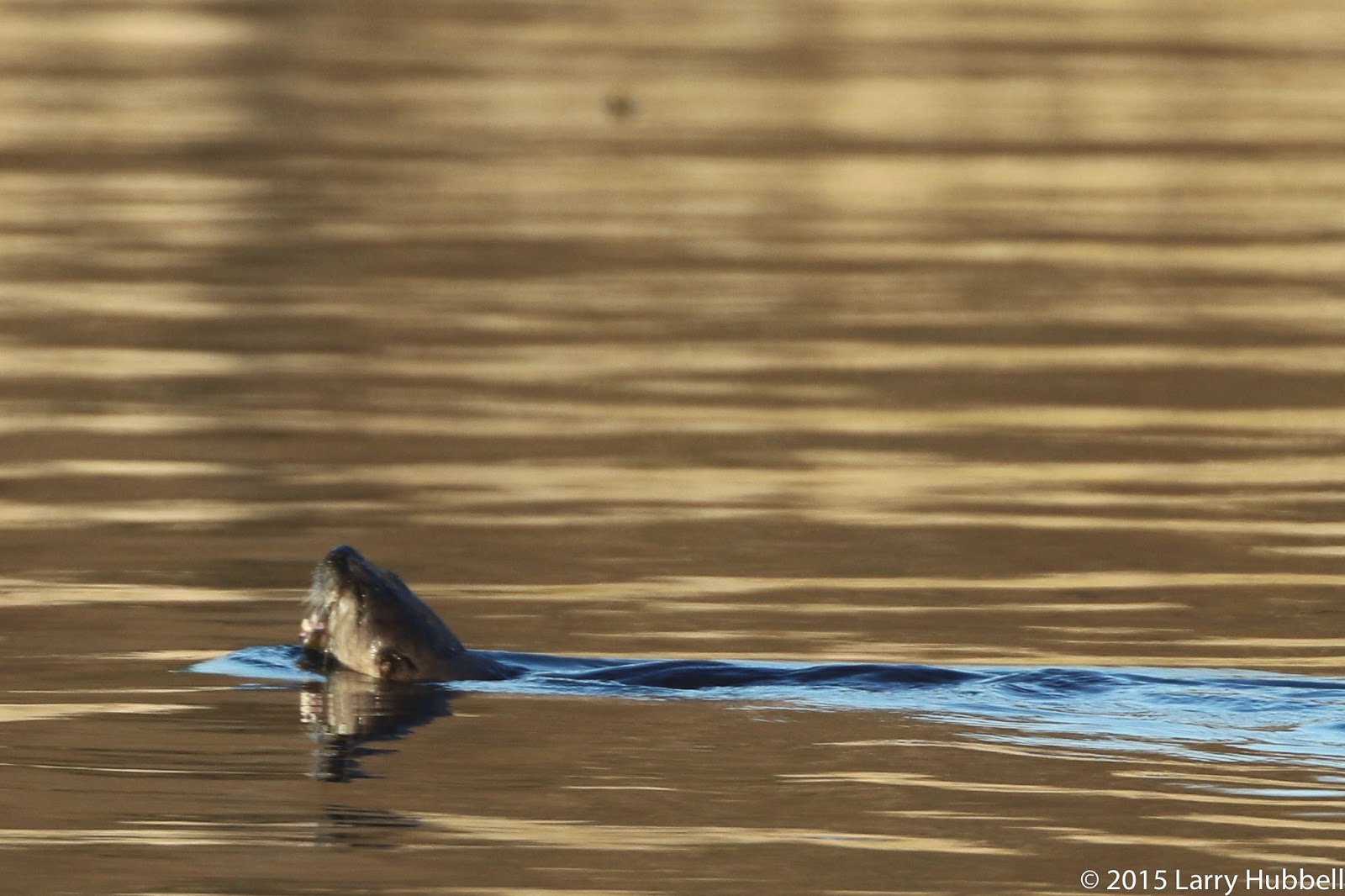 Nearby a river otter finds a bite of dinner… 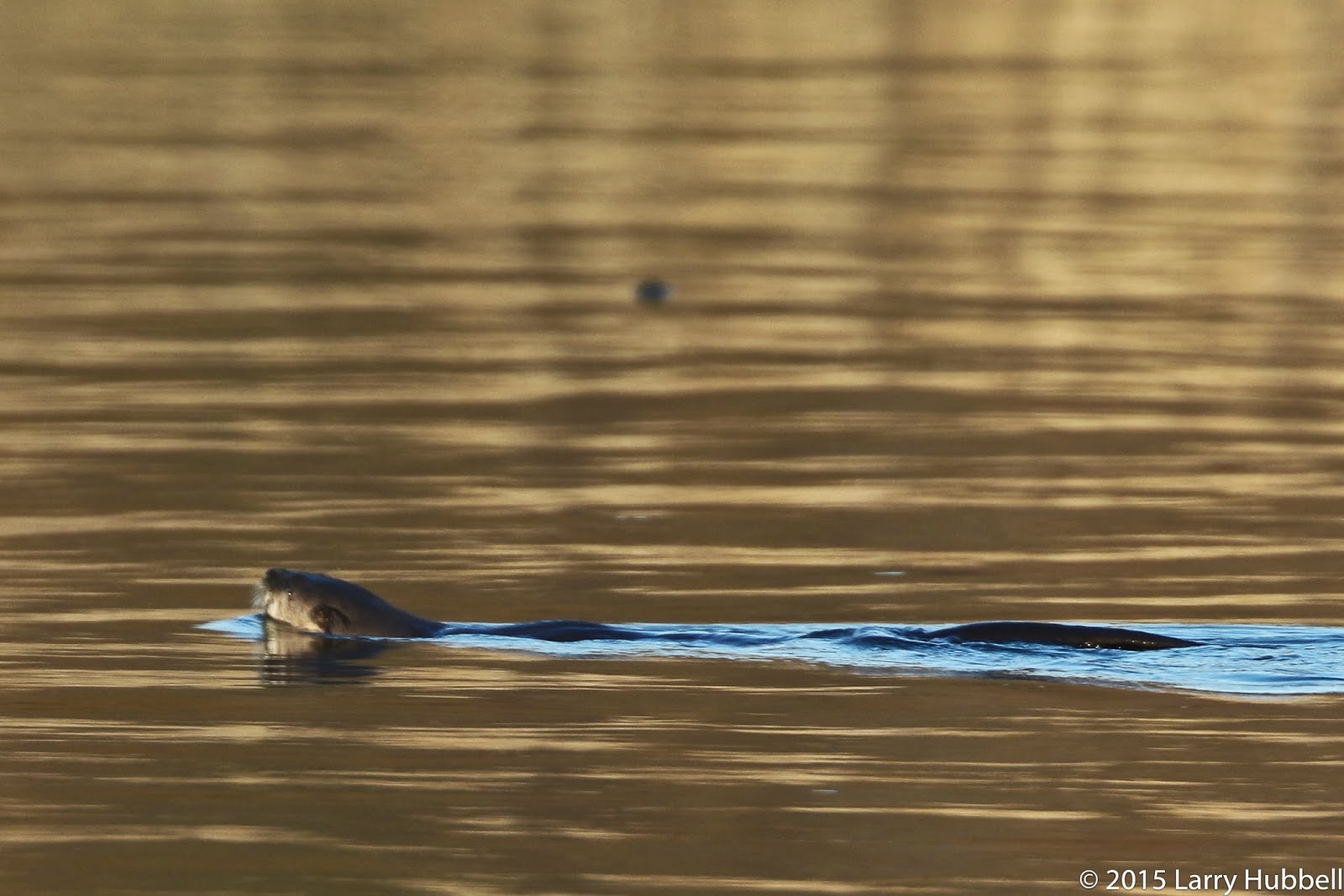 …before disappearing into the cattails. Since the otter entered the cattails around dusk it makes me wonder if it is spending its nights there. On Thursday, my daughter's dog acted unusually nervous in this area, which is close to where the beaver has been playing lumberjack. The scientific name for a river otter is Lontra canadensis, while the scientific name for a beaver is Castor canadensis.

The title to this post was, "Crossbills to Cucumbers". The link to crossbills was obvious, but the cucumber link is a bit more subtle. I will wait until next week's post to explain the relationship. This will give you seven days to solve the mystery. Good Luck!

Which of the next two photos do you like best? 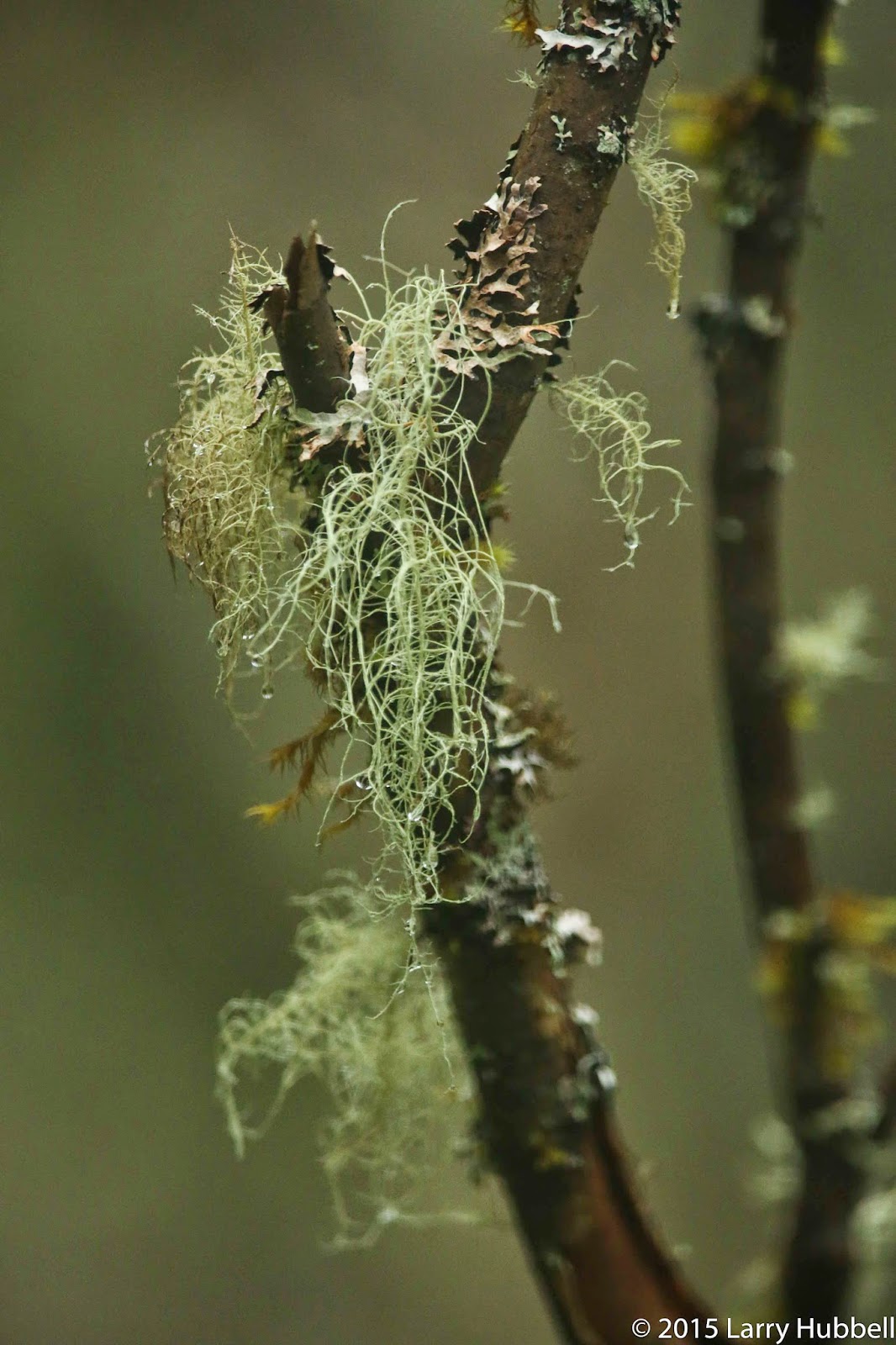 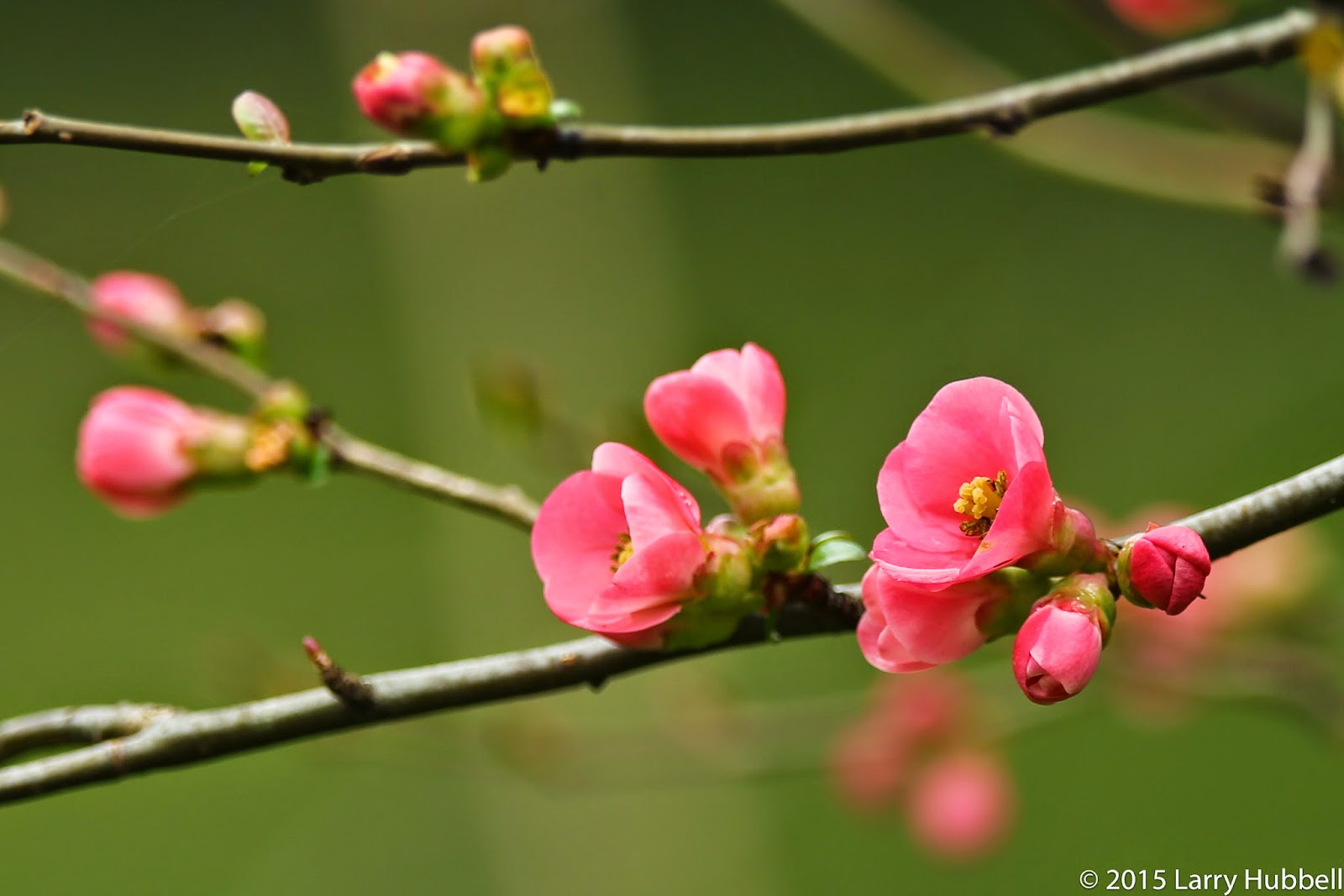 I am curious if living in the pacific northwest causes us to prefer the lichen or the blossoms. I seem to be leaning towards liking the lichen.