In Search of Elegance

Sunday morning, just after dawn, I passed under 520 and paddled into Otter Gap. Three different times last winter I spotted otters in the area between Marsh and Foster Islands. 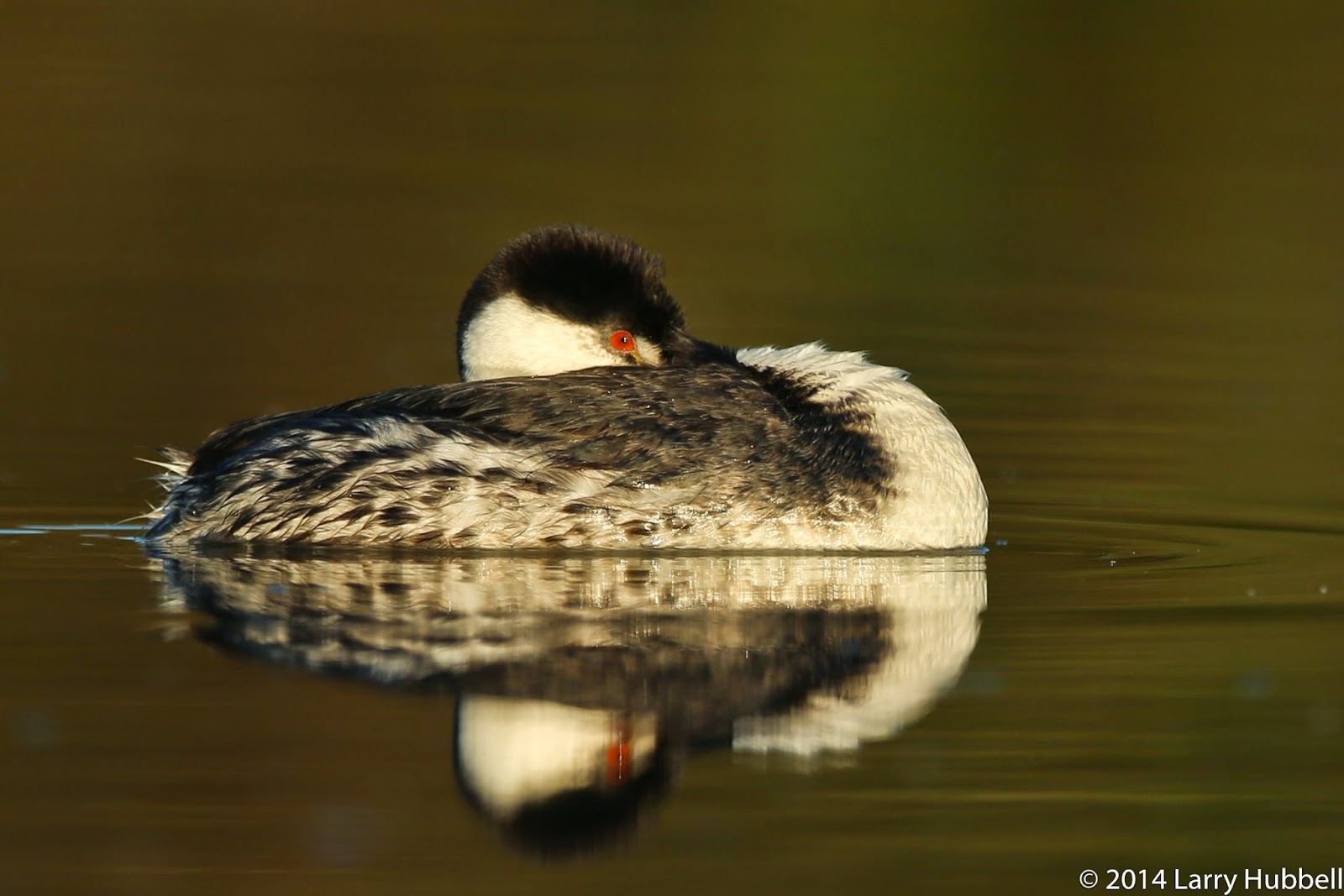 On Sunday, a single bird with no visible signs of locomotion, silently circled in serpentine figure eights between the islands. 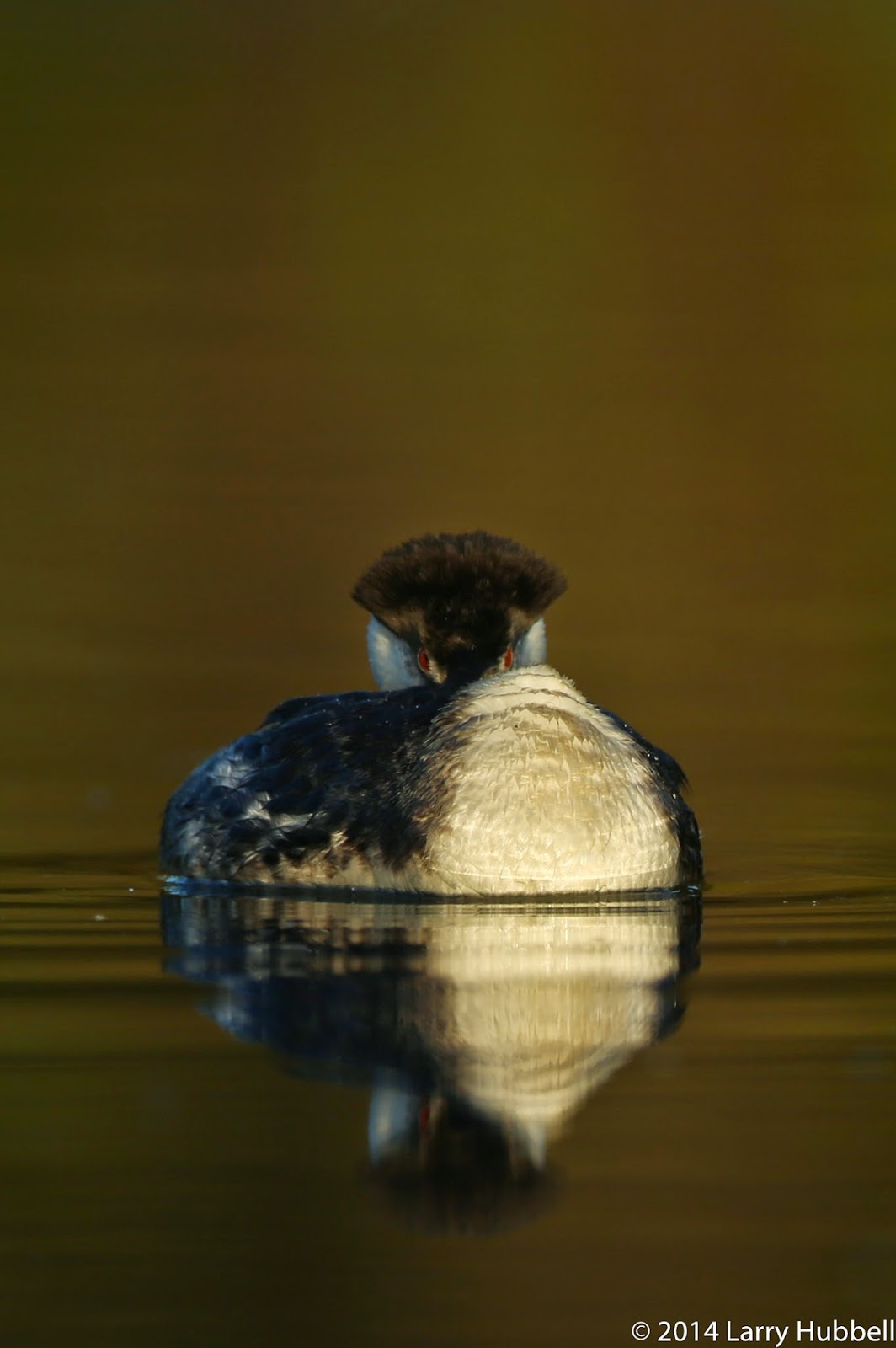 Oddly, the bird appeared alert, aware and completely relaxed all at the same time. 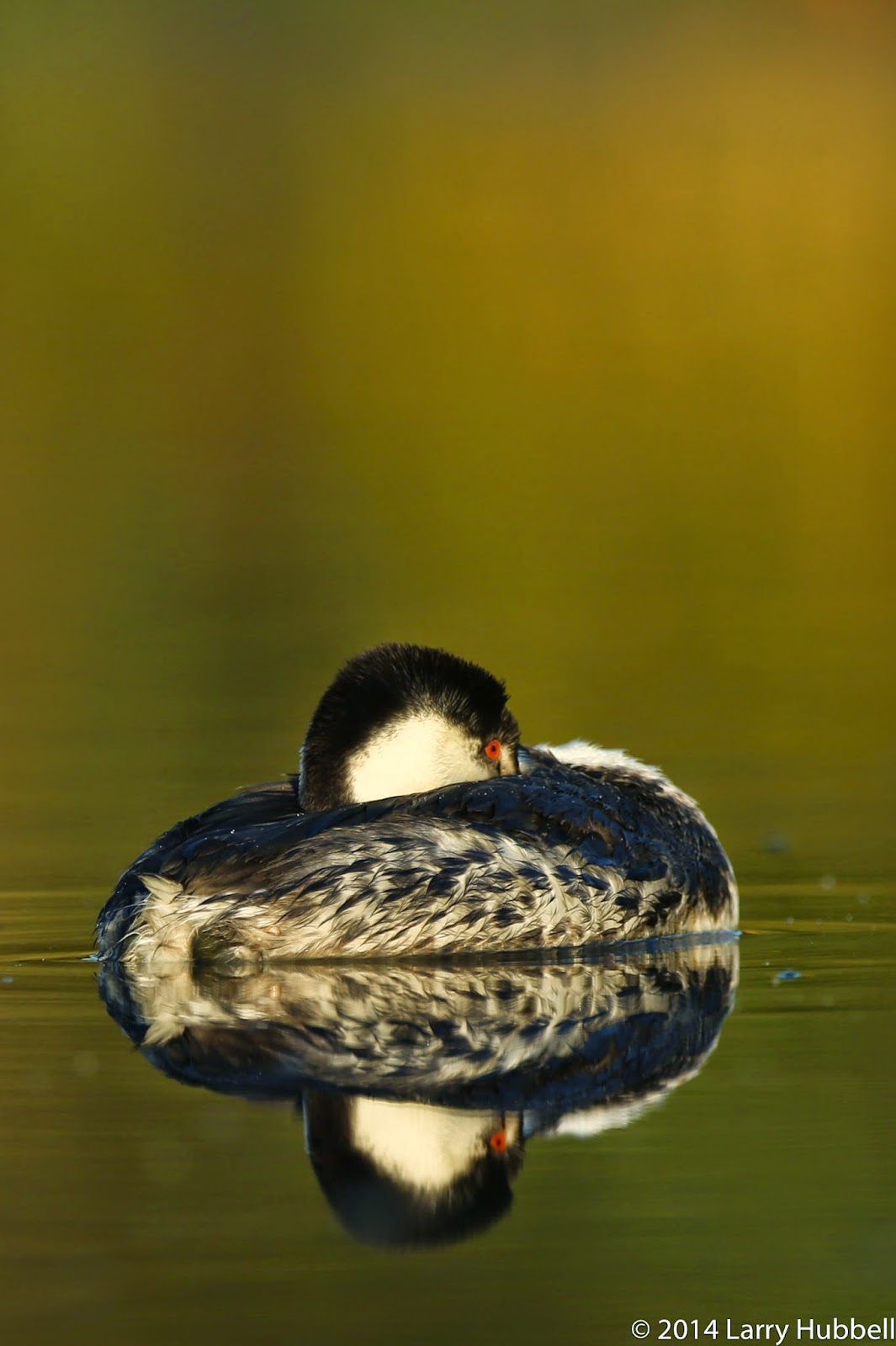 With its beak tucked out of sight, its head positioned at mid-ship, and its paddling taking place below the water's surface, this bird and western grebes in general, always remind me of... 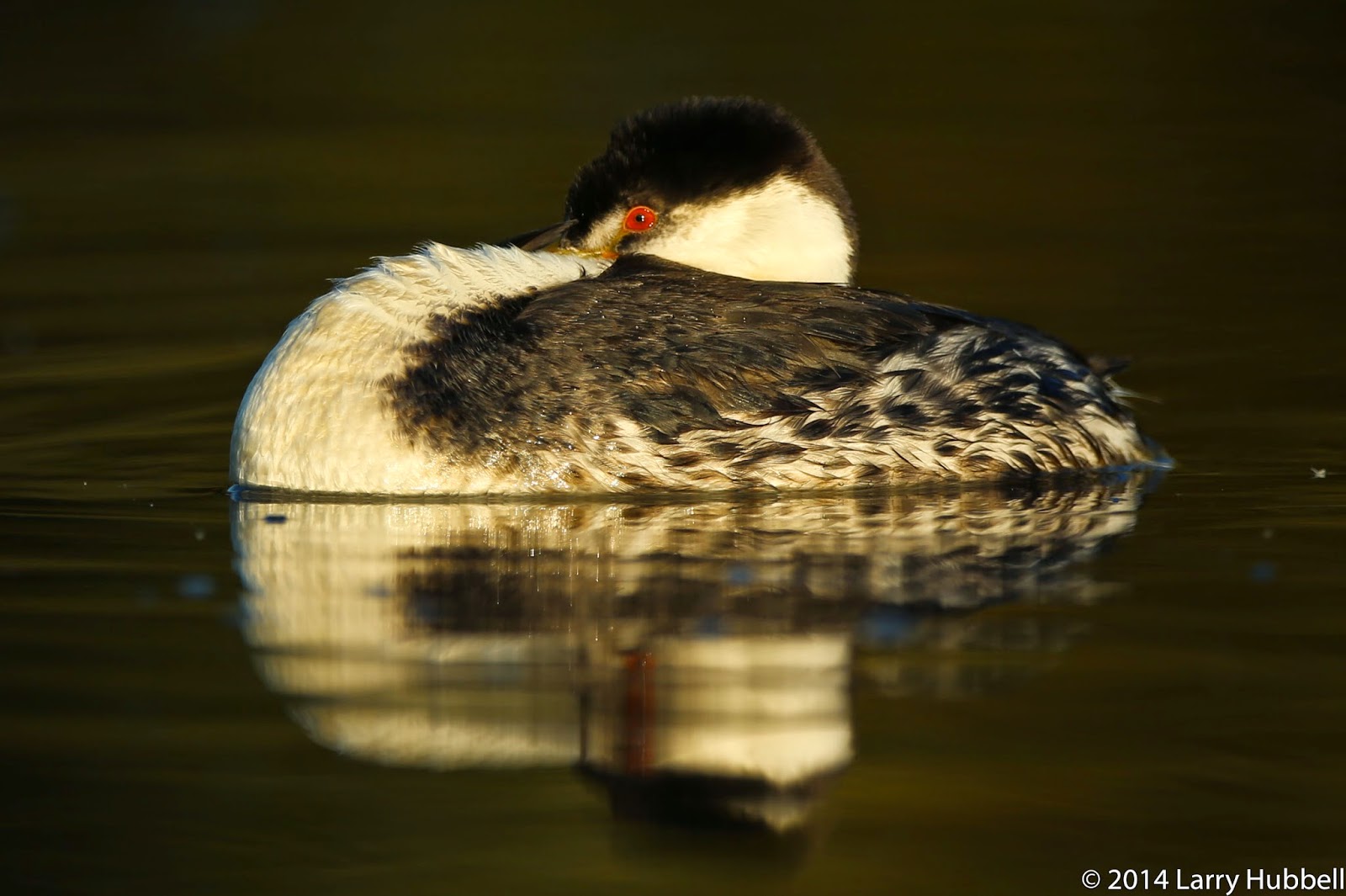 ...toy boats. It almost seemed as if this bird's movement was supplied by a rubber band attached to a little plastic propeller. Undisturbed, the bird circled left and right, clearly aware of my presence, but unperturbed. 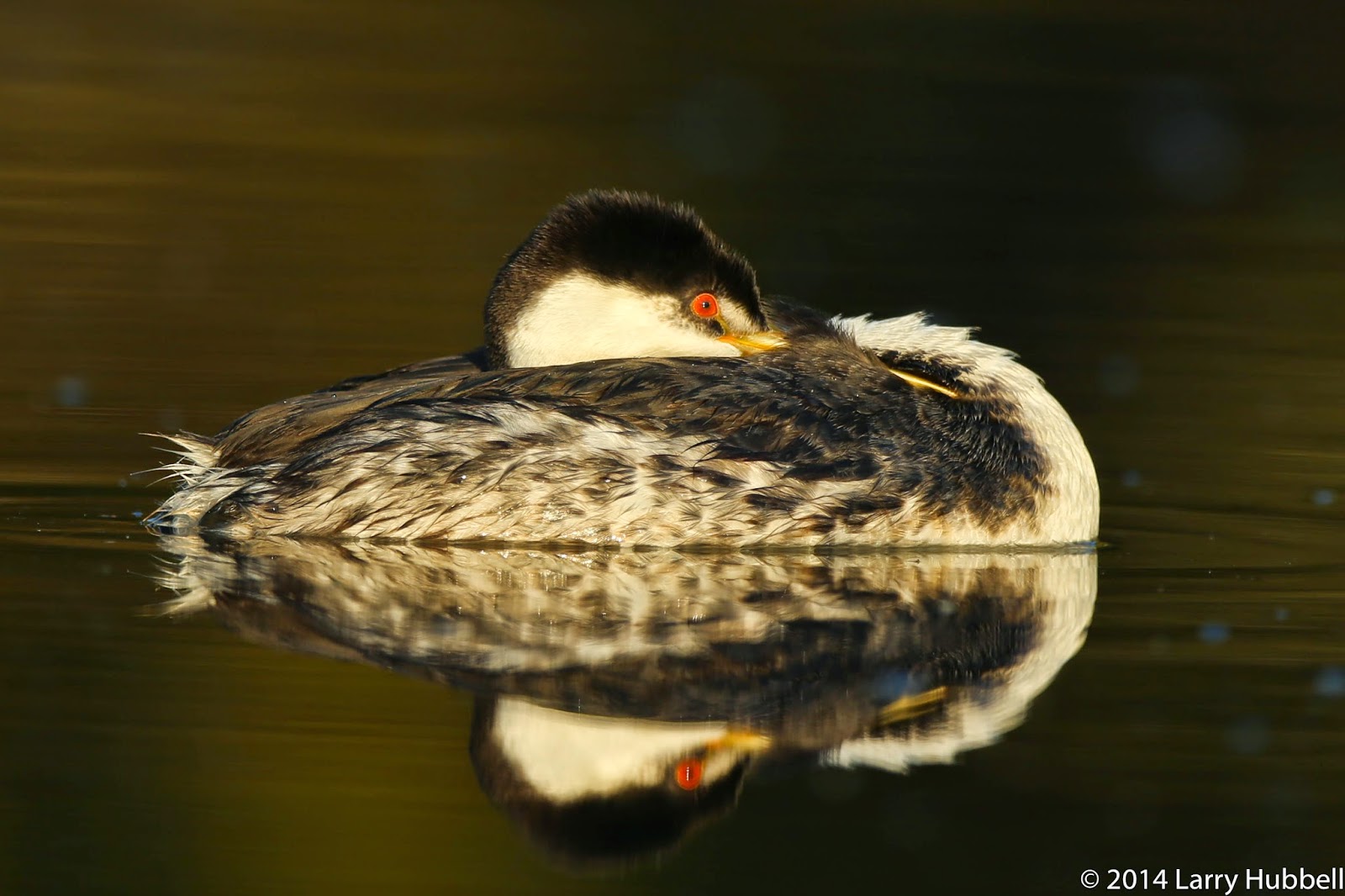 Occasionally while grooming, its beak would become visible, making it hard to maintain the toy boat illusion. 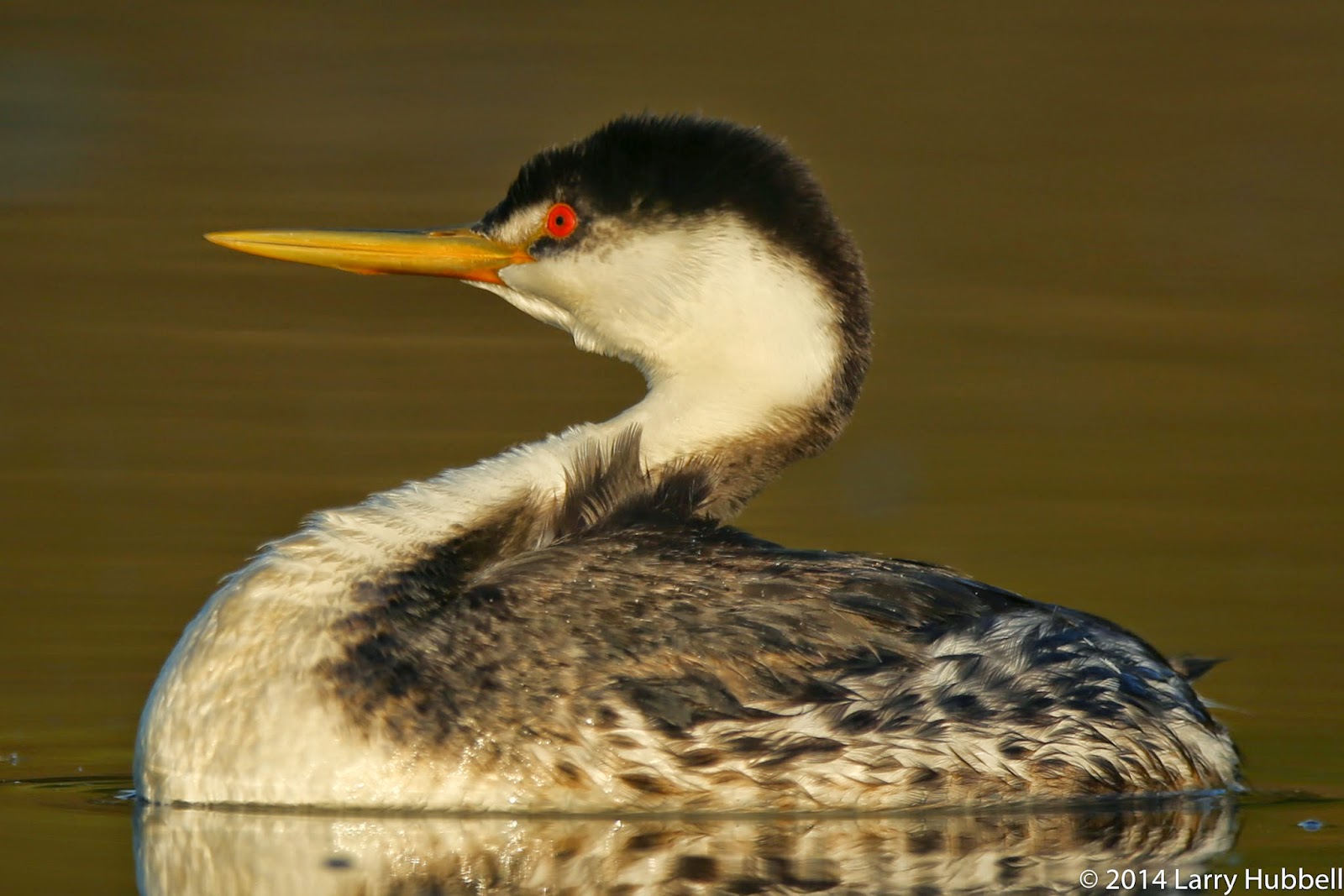 When another boater and his dog appeared nearby, the grebe came to attention and moved out of their way, but did not leave the area. 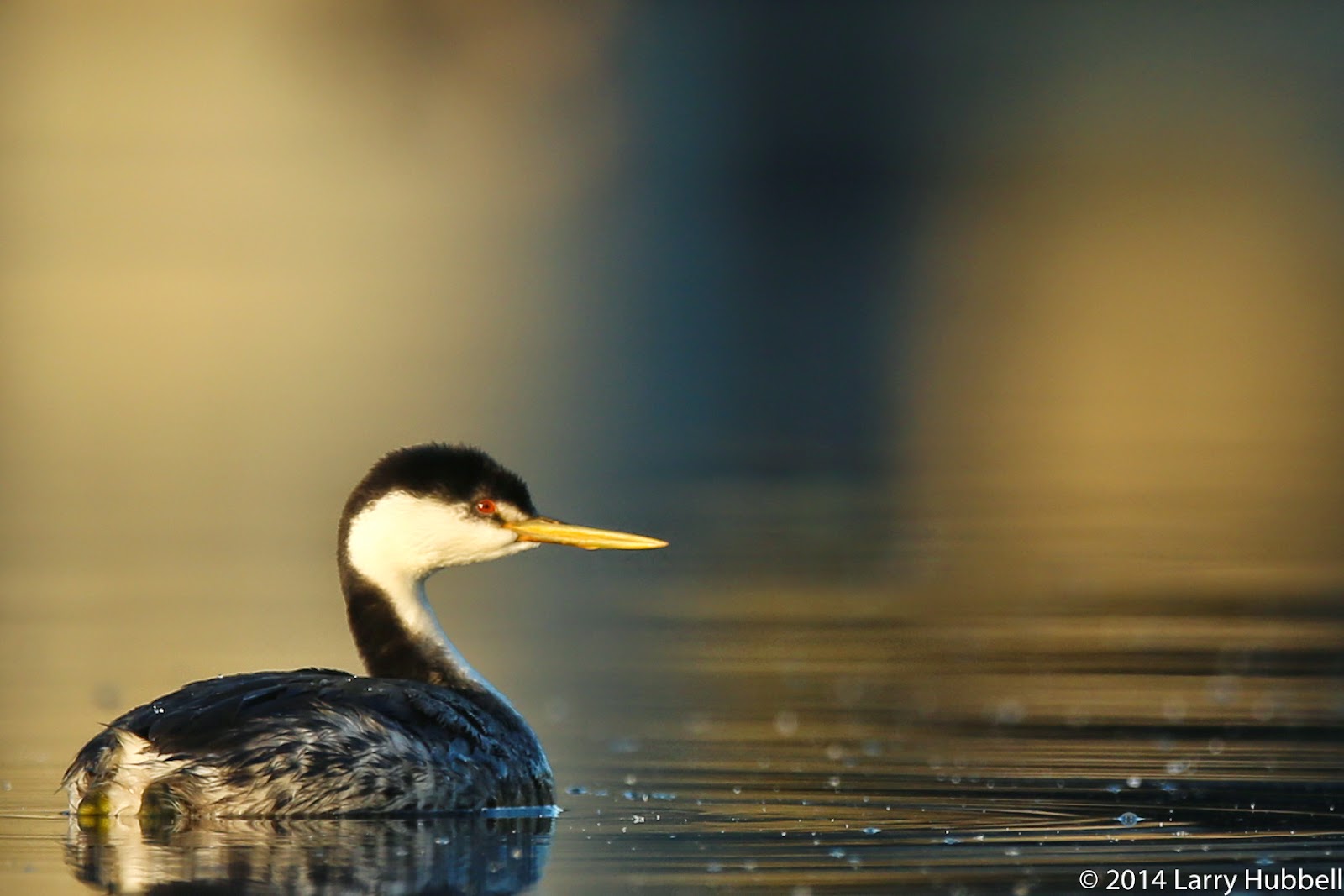 I have only seen western grebes on Union Bay during the cooler months and never more than three birds at once. If memory serves me right, in the book, "In the Life of a City Marsh", the authors imply that 65 years ago western grebes were much more plentiful here. Maybe when our water pollution is reduced, by the new 520 bridge, the number of wintering western grebes will increase. I hope so. 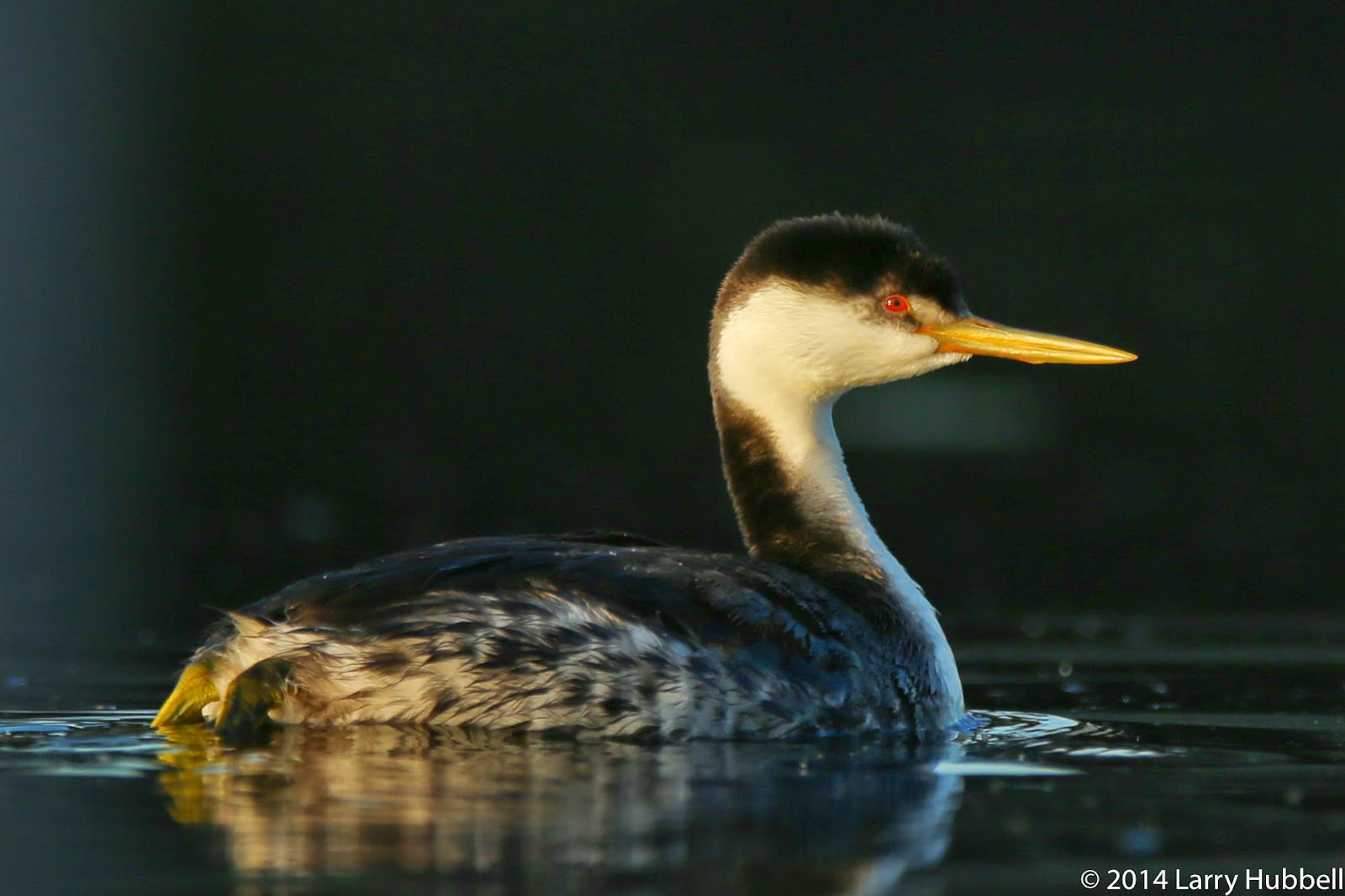 Western grebes are a challenge to photograph. For one thing their dark and light color pattern makes it difficult to get a good exposure without losing the detail in the white or the dark areas. But even more challenging is trying to capture the elegance of the bird. 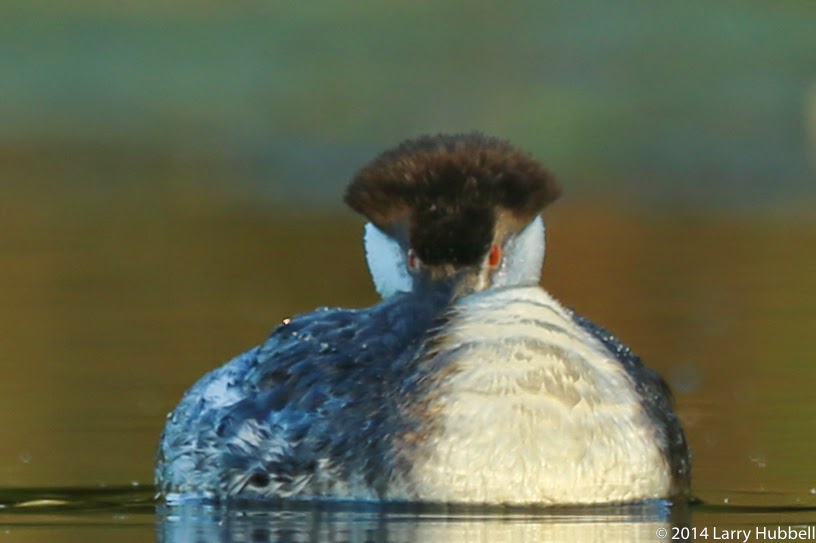 All grebes have their feet at the south end of their body, which can look awkward, and when looking them square in the face their elegance is not always obvious. Still there is something magically elegant that is readily apparent in person. 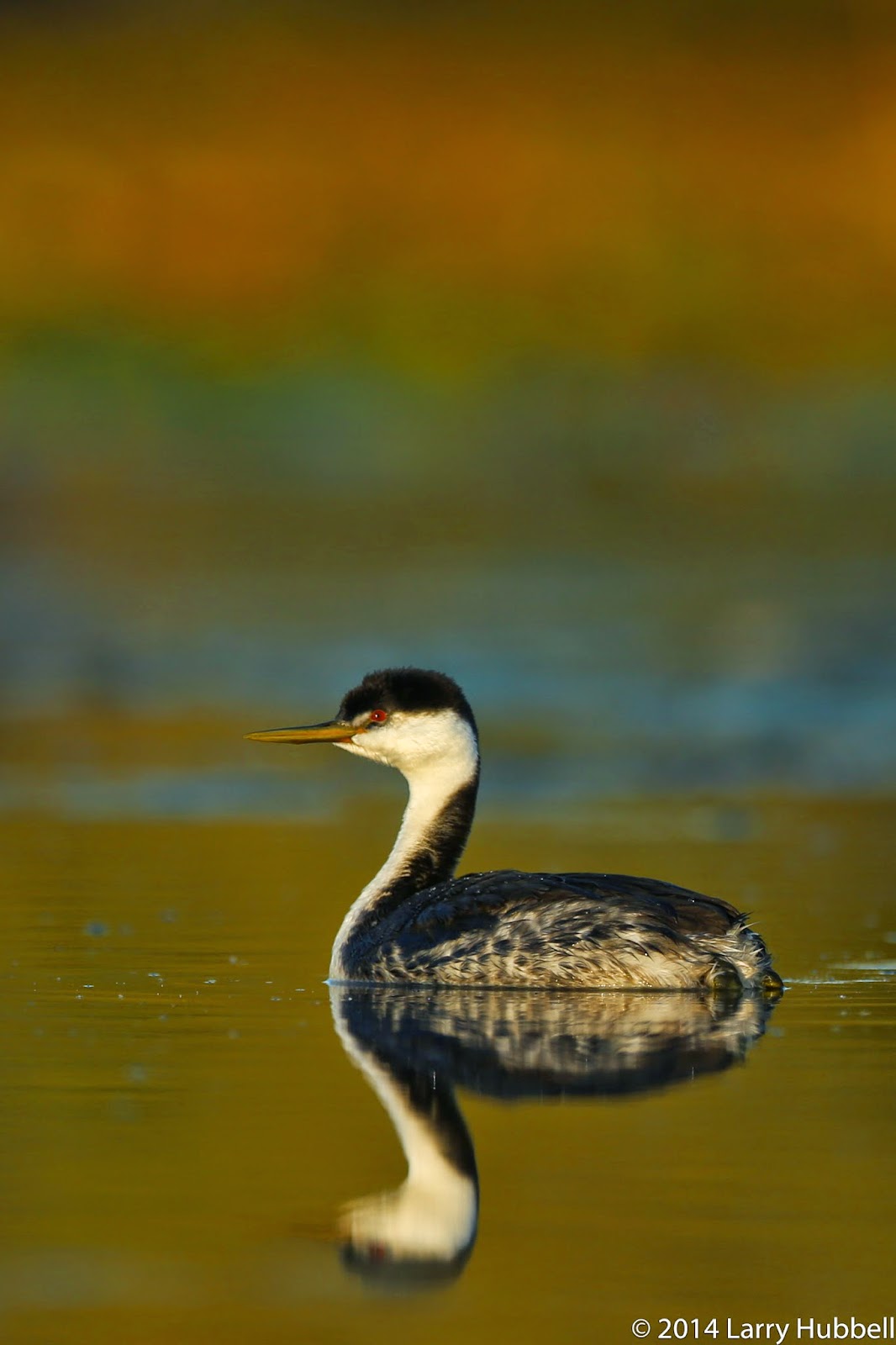 Complementing the bird with a colorful background is nice but it still does not quite convey the feeling. 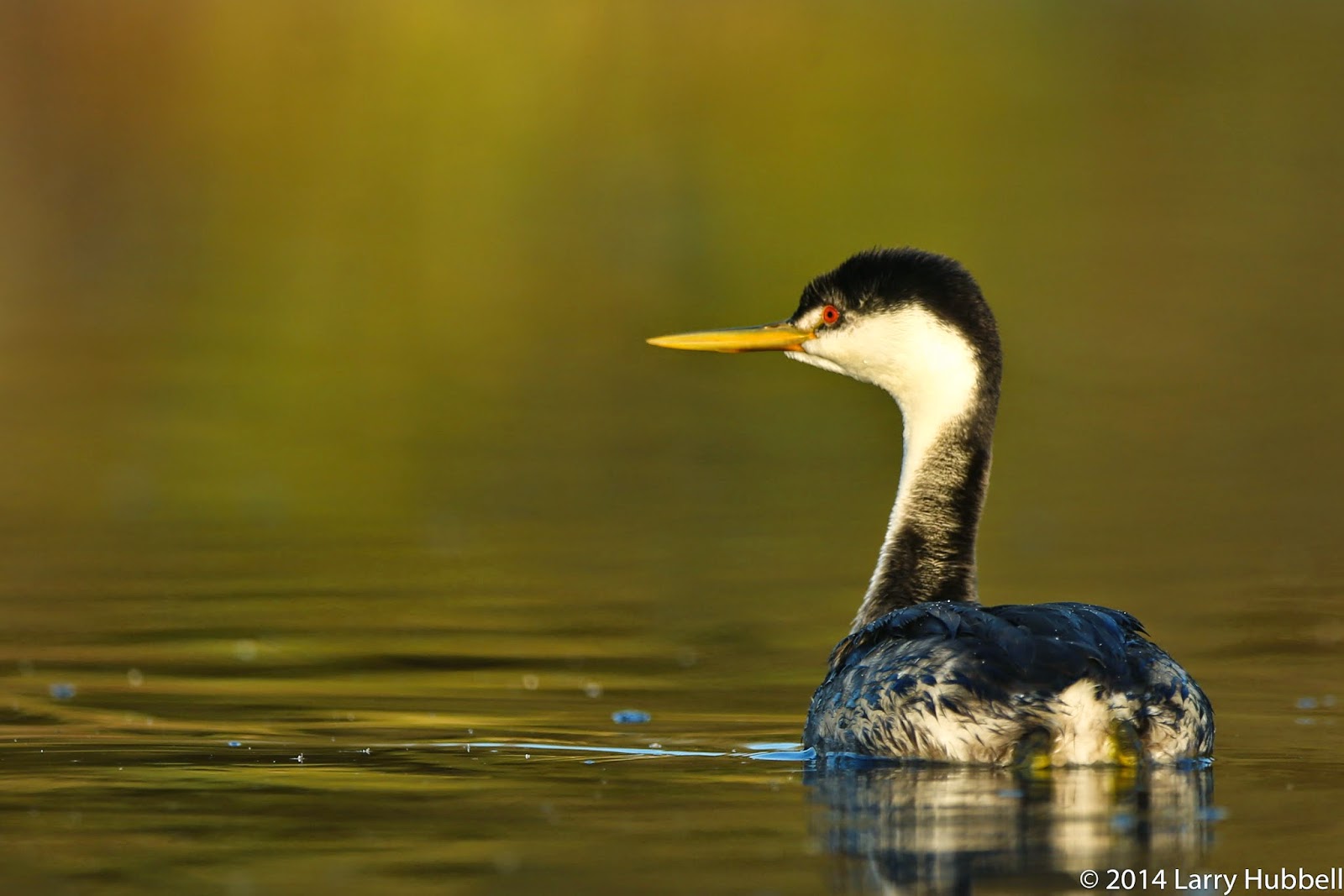 Focusing on the vibrant red eyes can help. 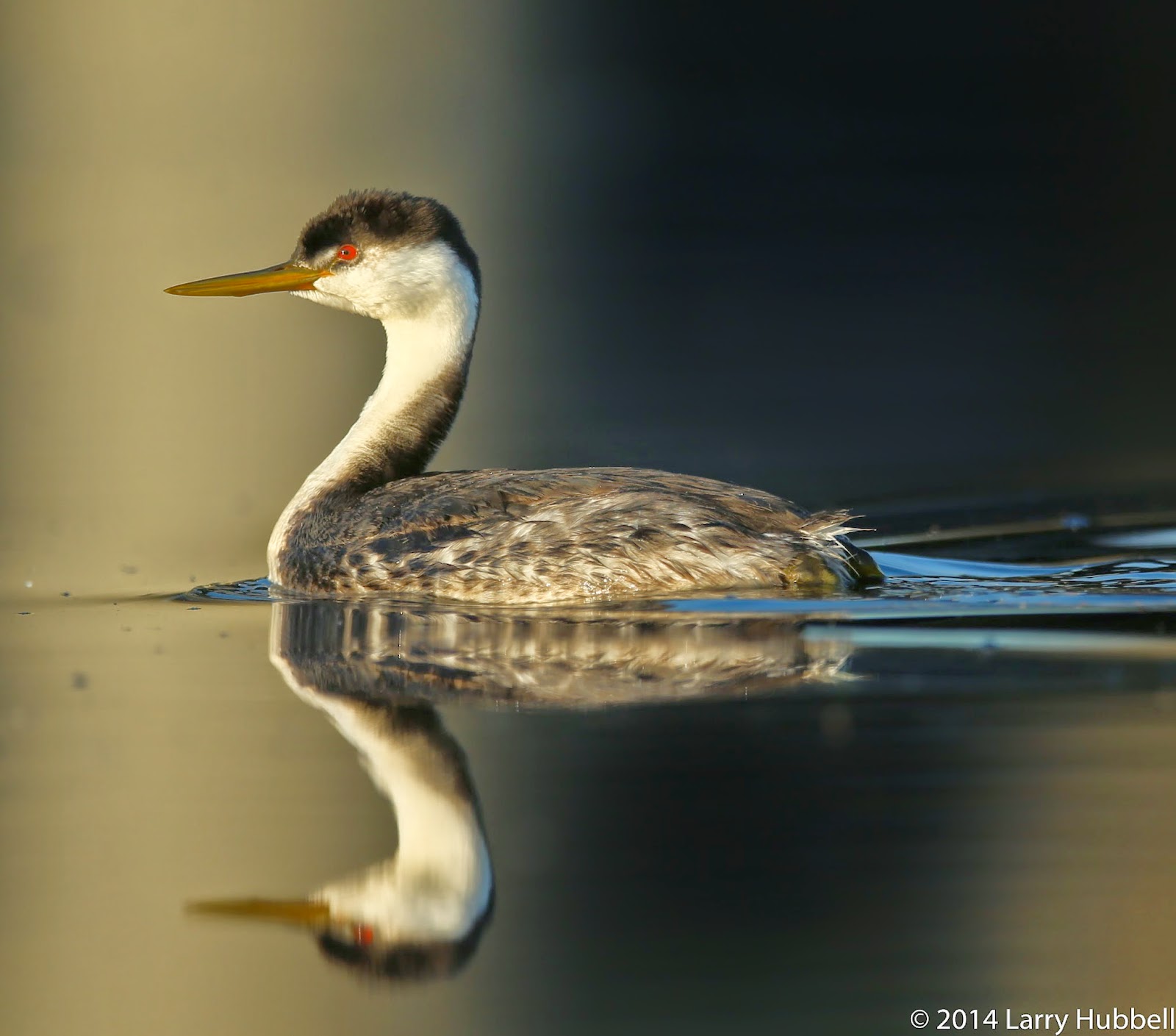 Adding a reflection does not hurt, but still there is something missing. 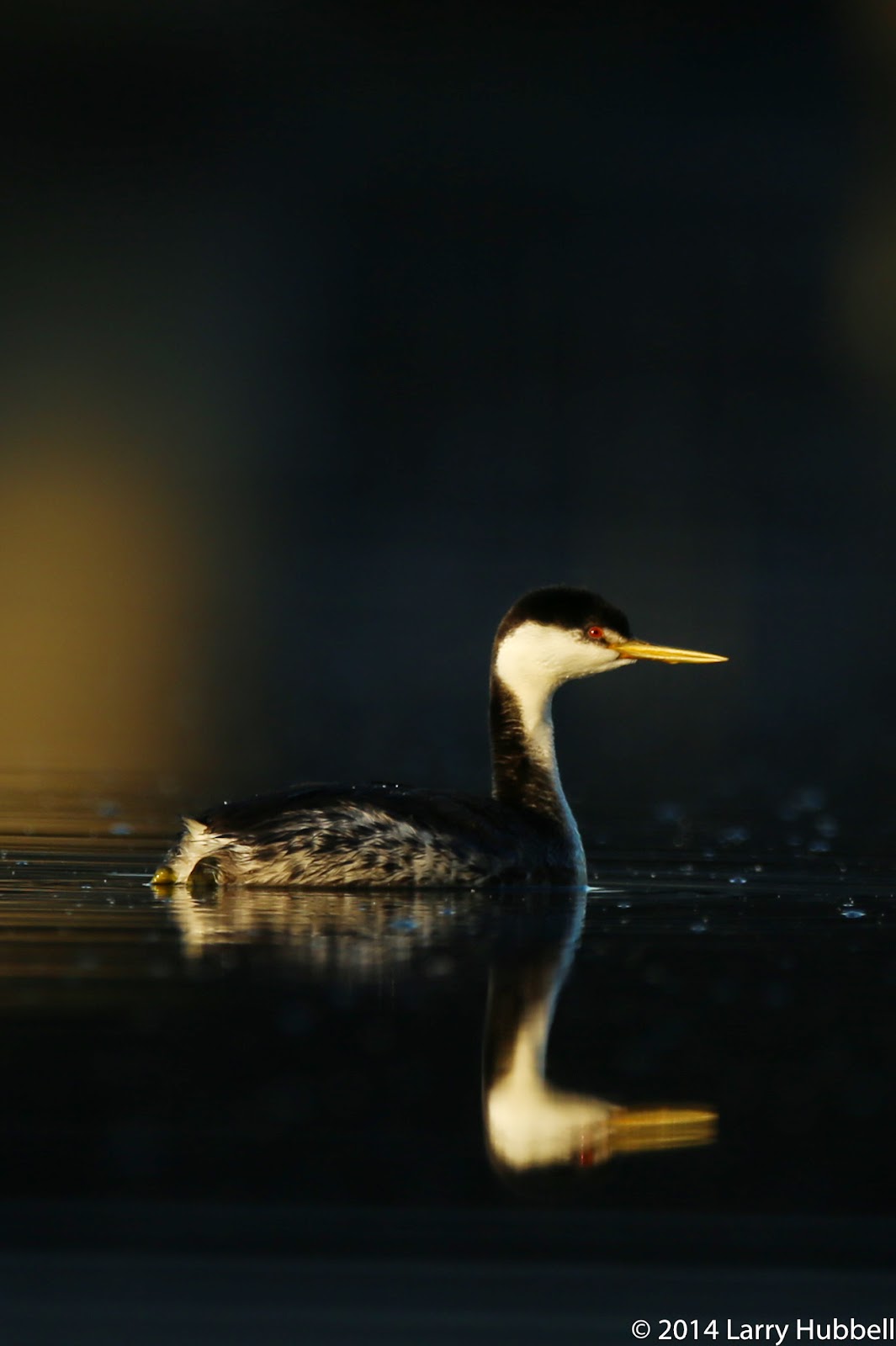 Oddly, it may be that less is more. 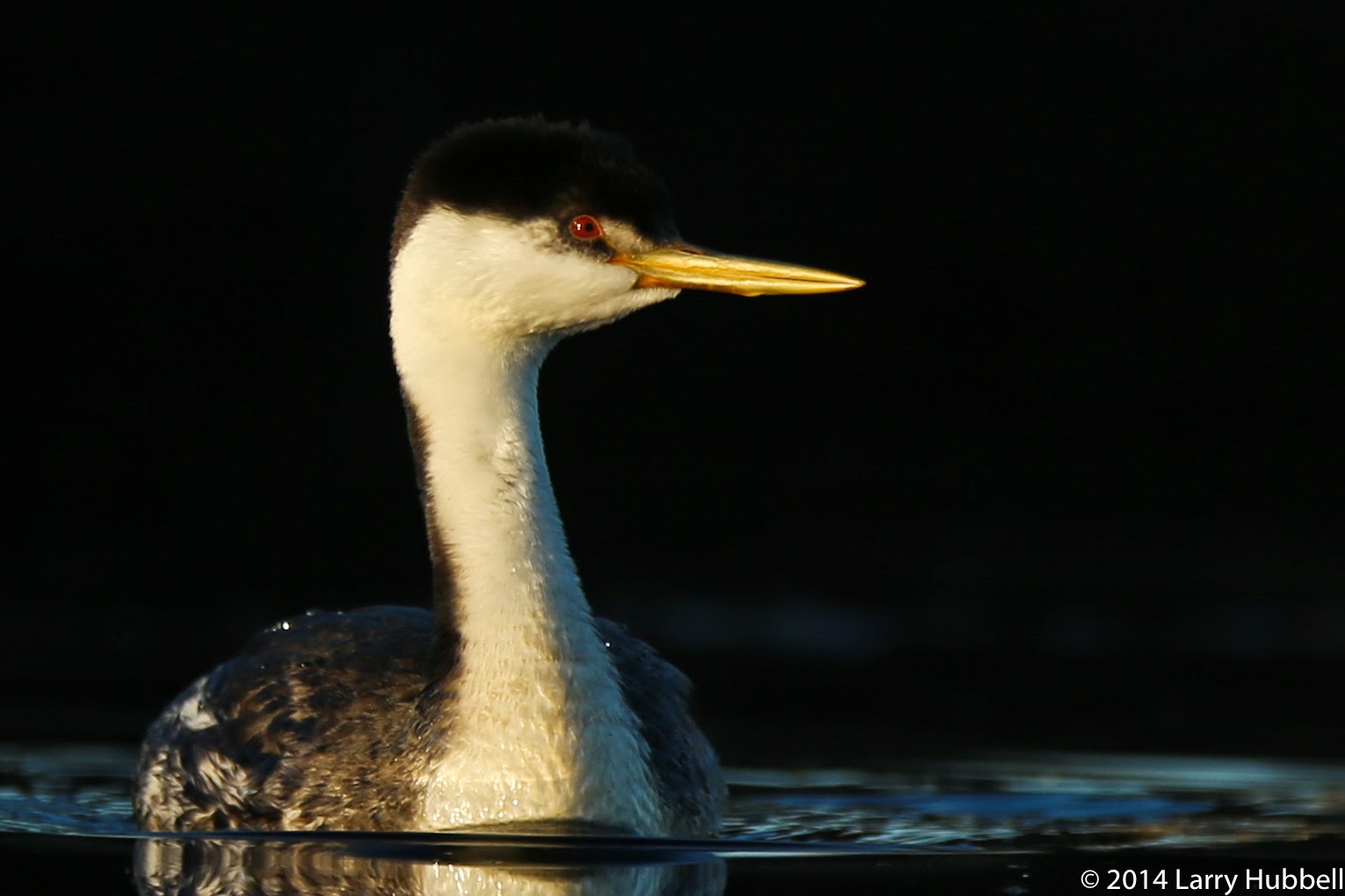 It almost seems like more of their elegance is apparent when the dark colors of the bird blend into the background. In the photo above, the striking triangular shape of the white head and yellow bill seem to pop off the page a bit. 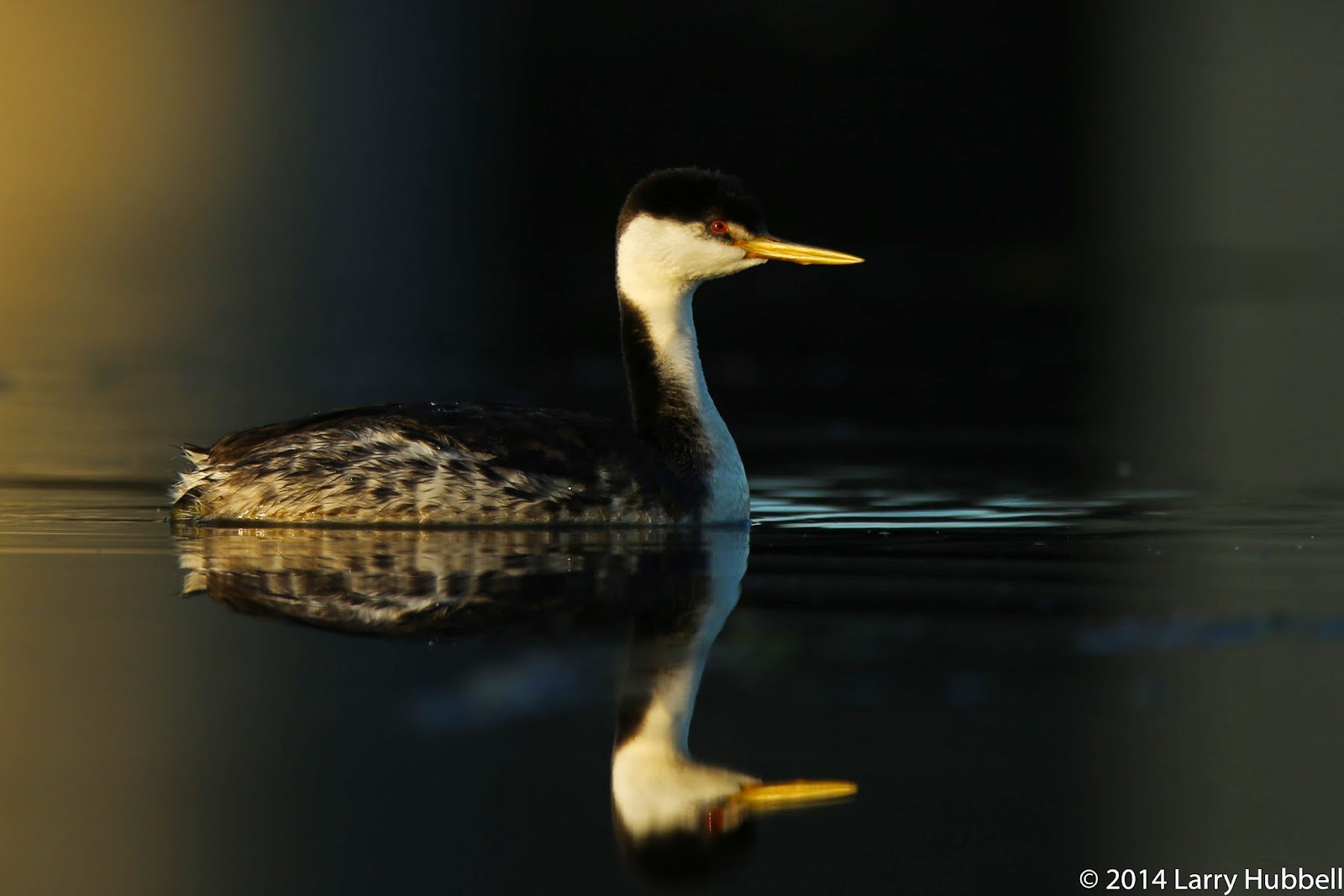 Still, that does not quite convey their beauty. 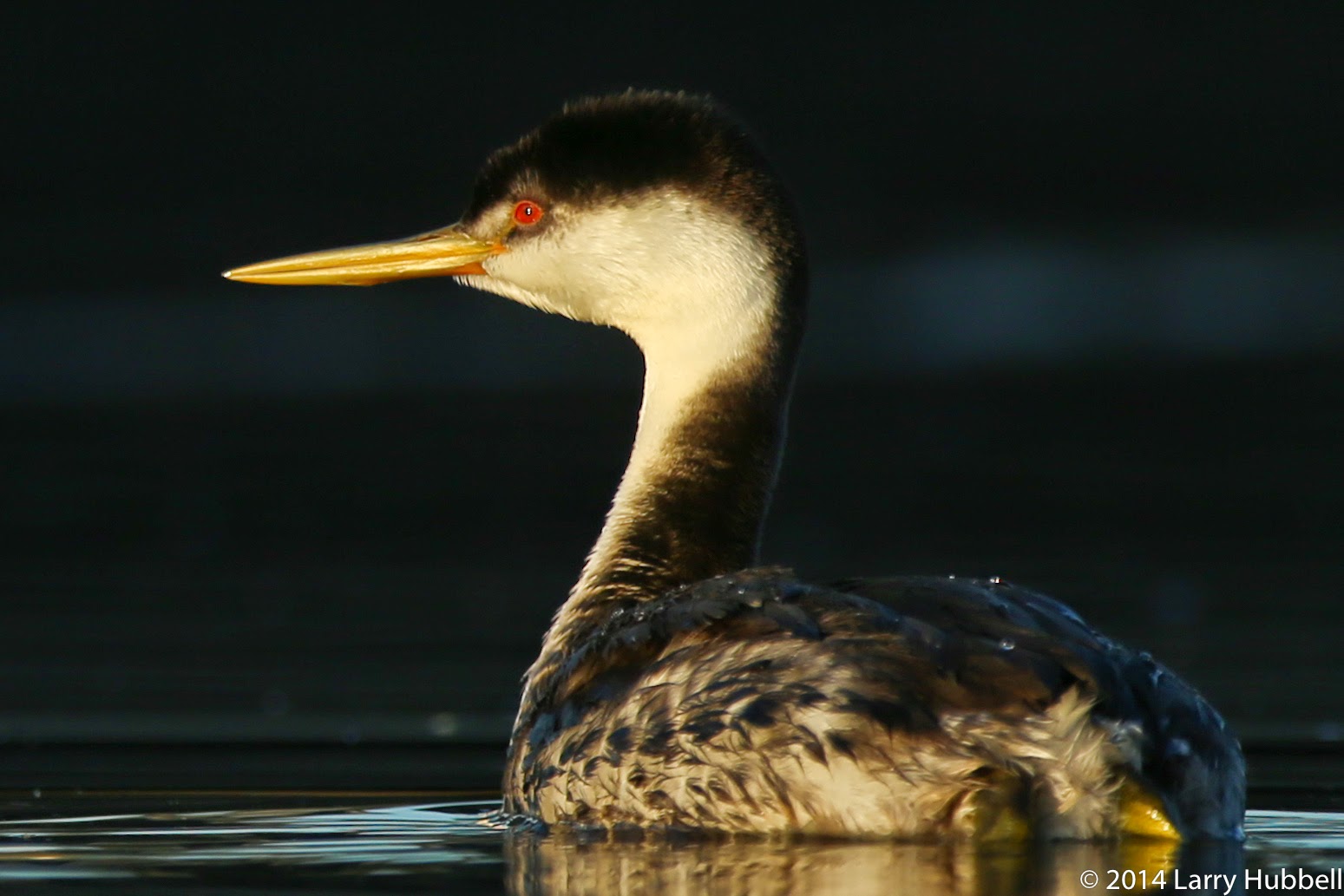 Maybe it is more the twist of the neck that makes them look so elegant. 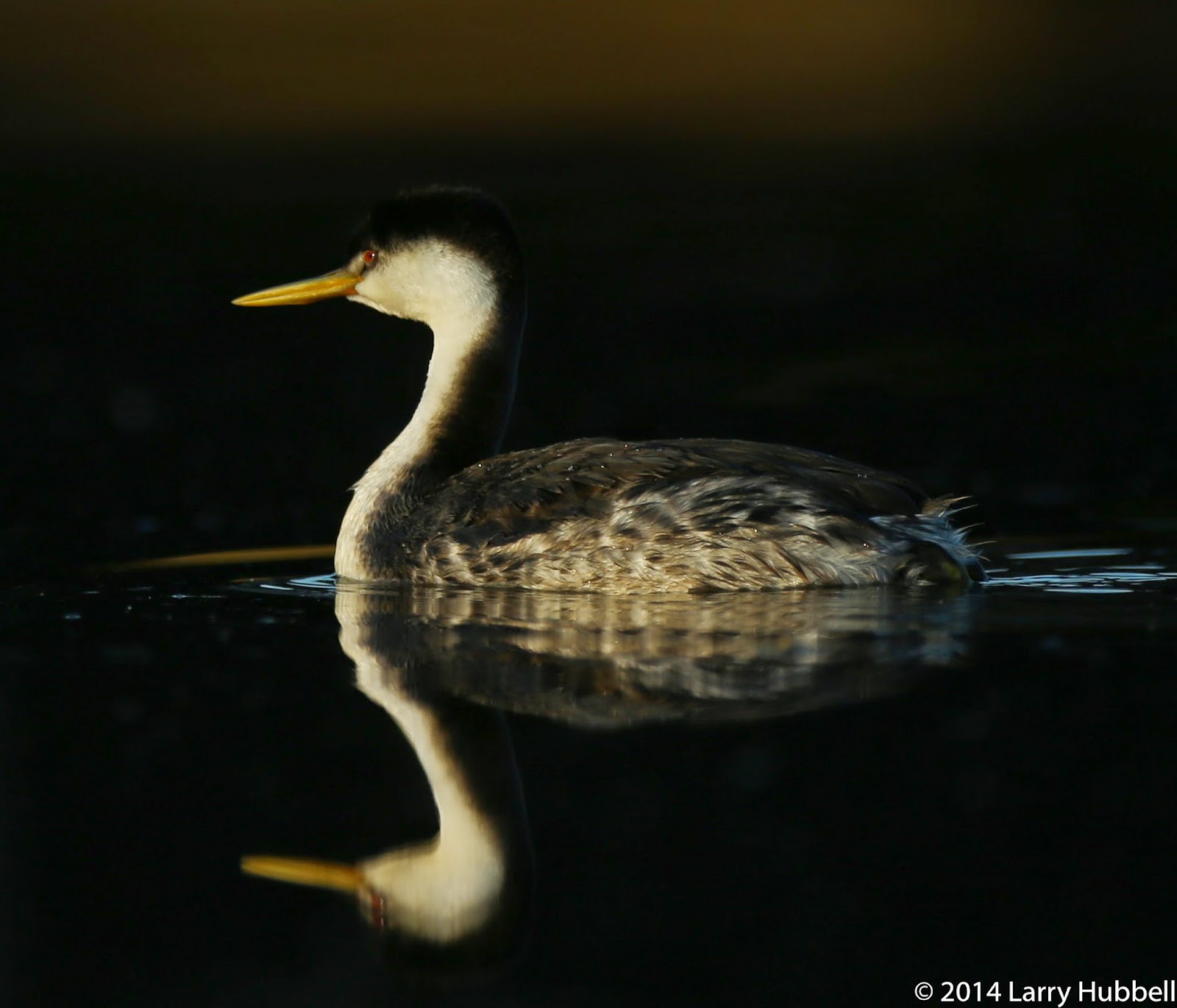 It is very hard to say. 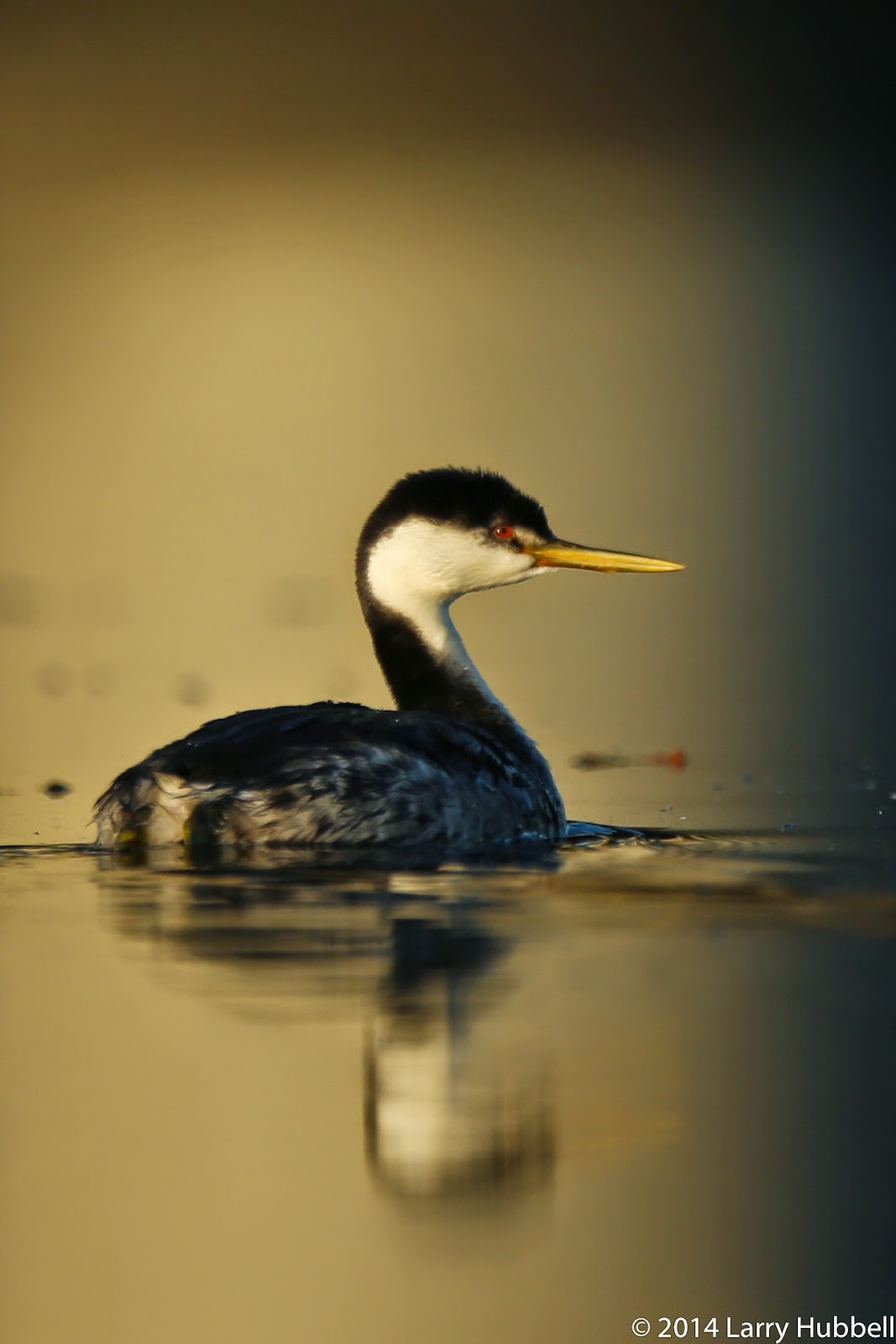 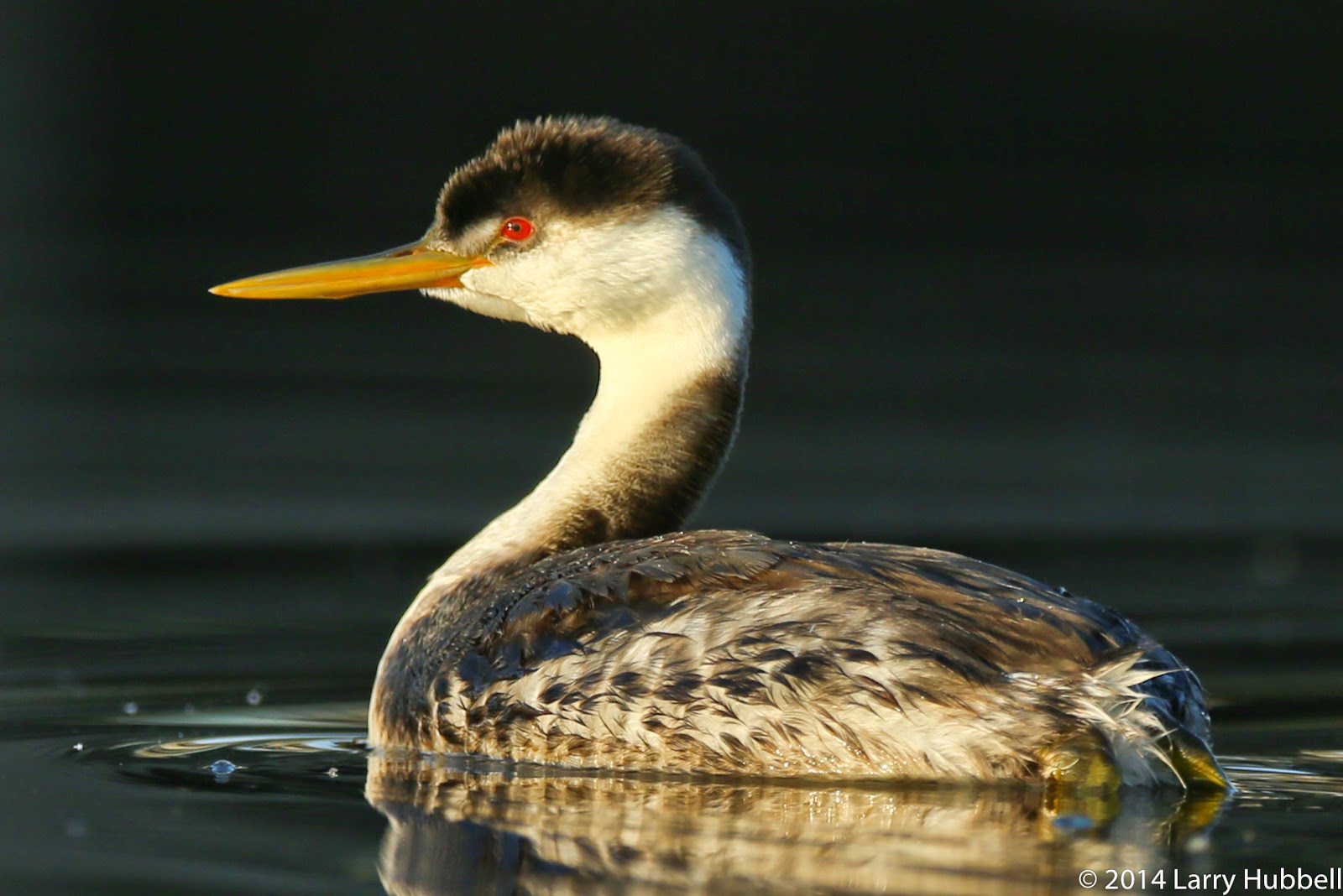 …one simply must admit…. 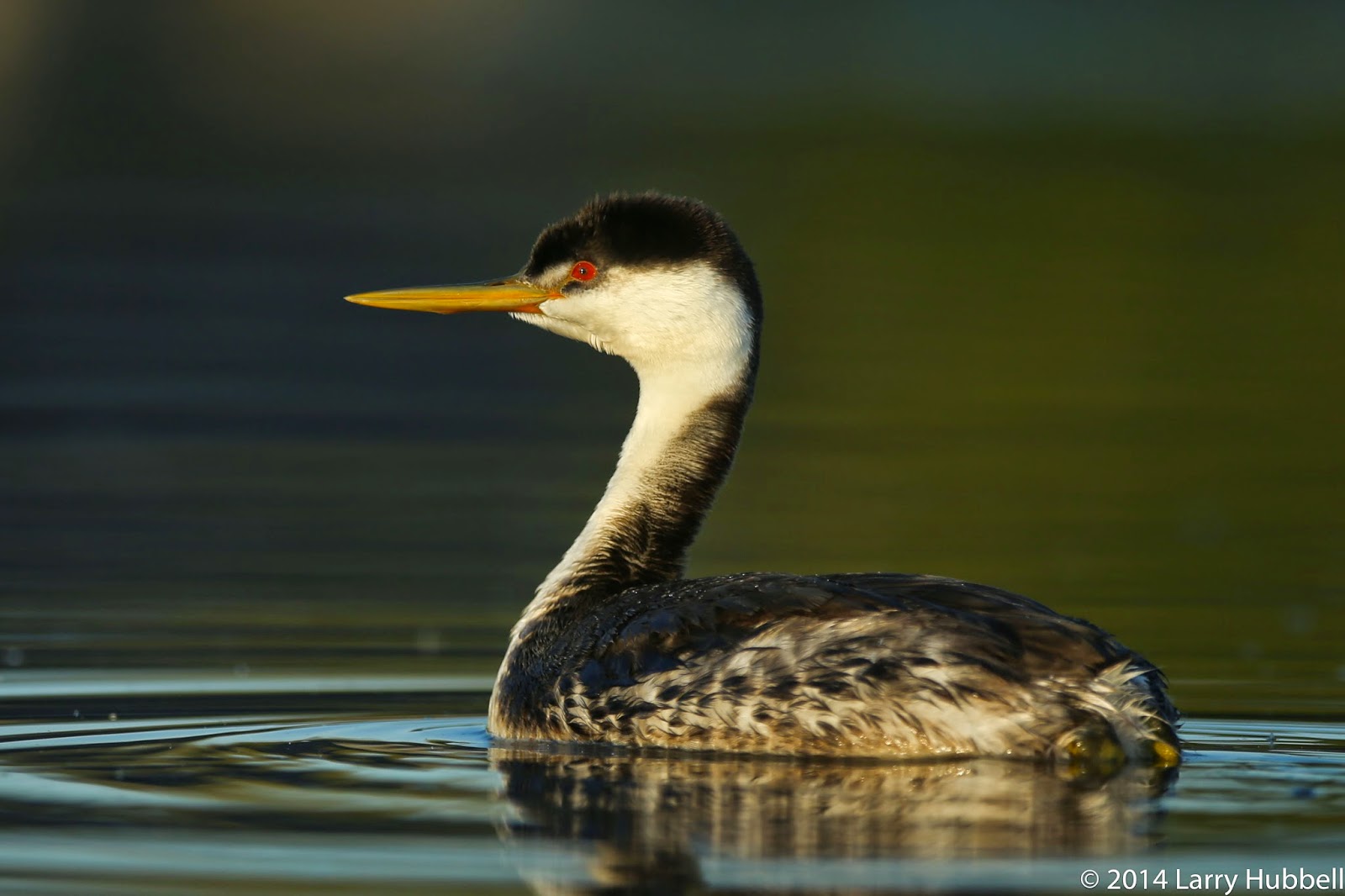 …the joy and the vibrance...

…can simply not be captured in a photograph. No matter how I try to entice you, the beauty and elegance of western grebes, and nature in general, can only truly be experienced first hand.

Click here to find out if the bird above is truly a Western Grebe or a Clark's Grebe. 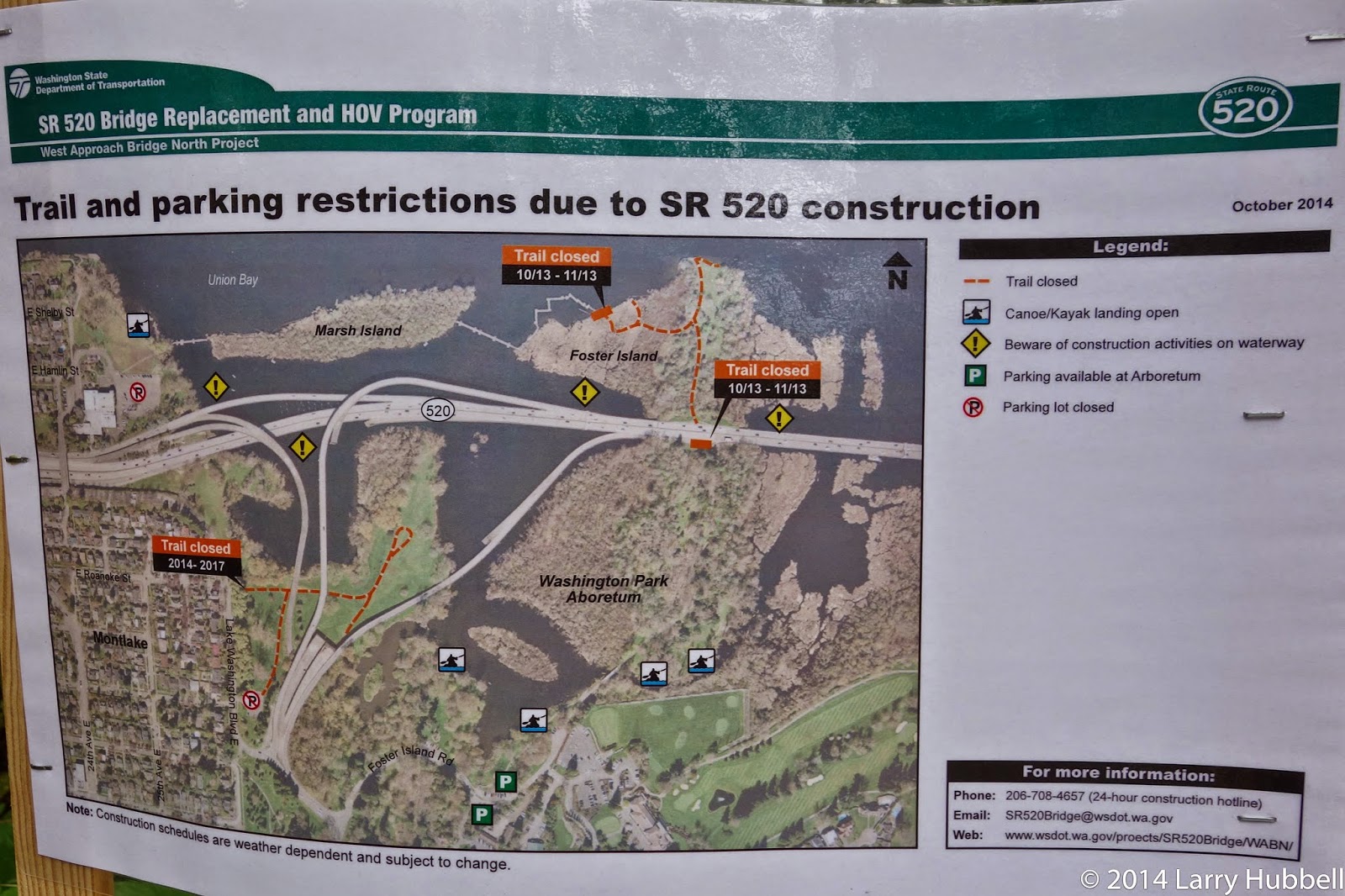 By the way, starting on Monday, the north end of Foster Island will be closed for the next month. 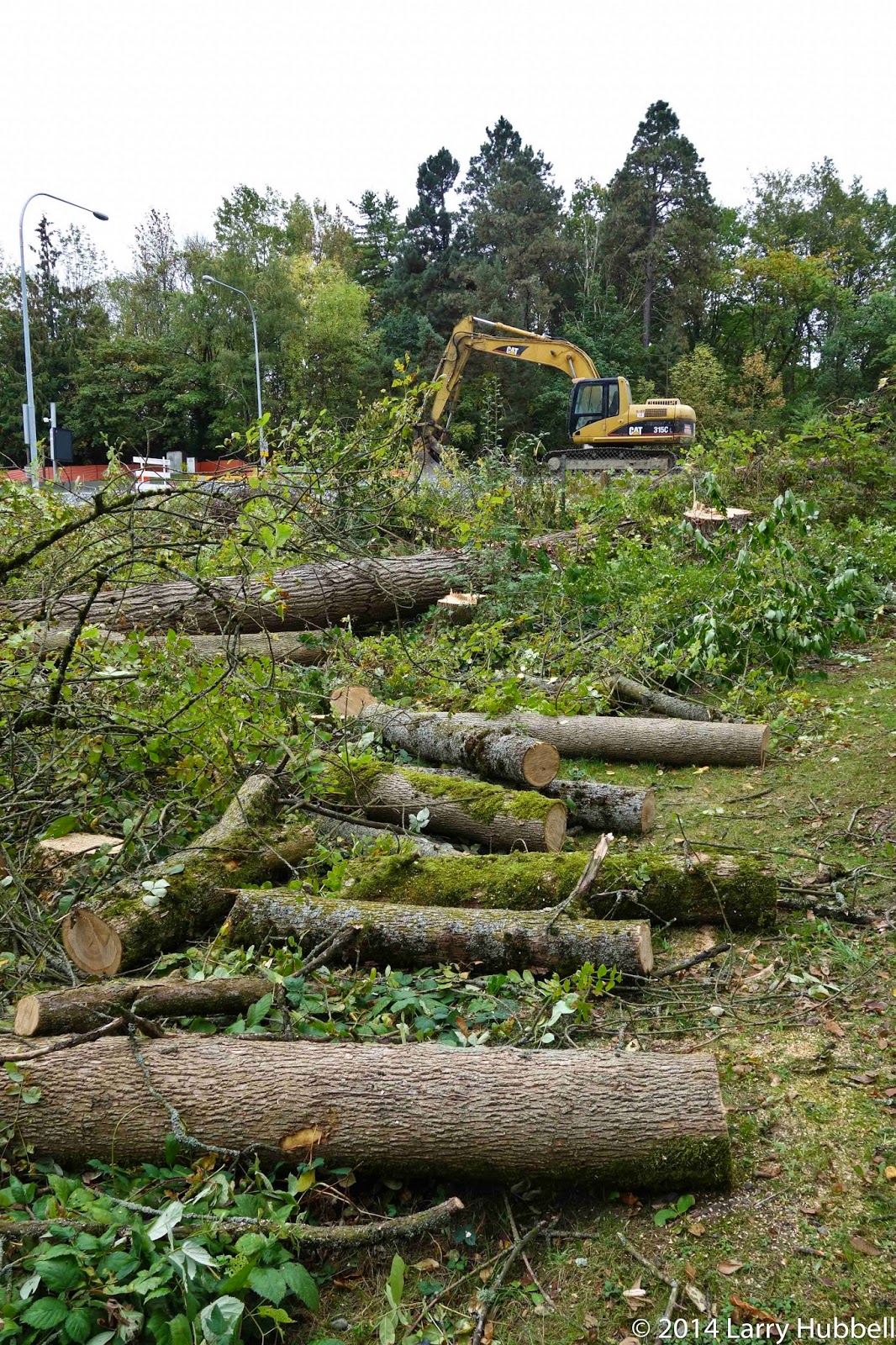 Sadly, progress has already begun. The good news is it looks like the area being cleared, for 520 expansion, is the most narrow portion of Foster Island, immediately north of the existing freeway. Actually, I guess it is not free any more, so technically, it is no longer a freeway.

Posted by Larry Hubbell at 2:40 PM