Elvis and Priscilla | Young In The Nest | New Life in Interlaken 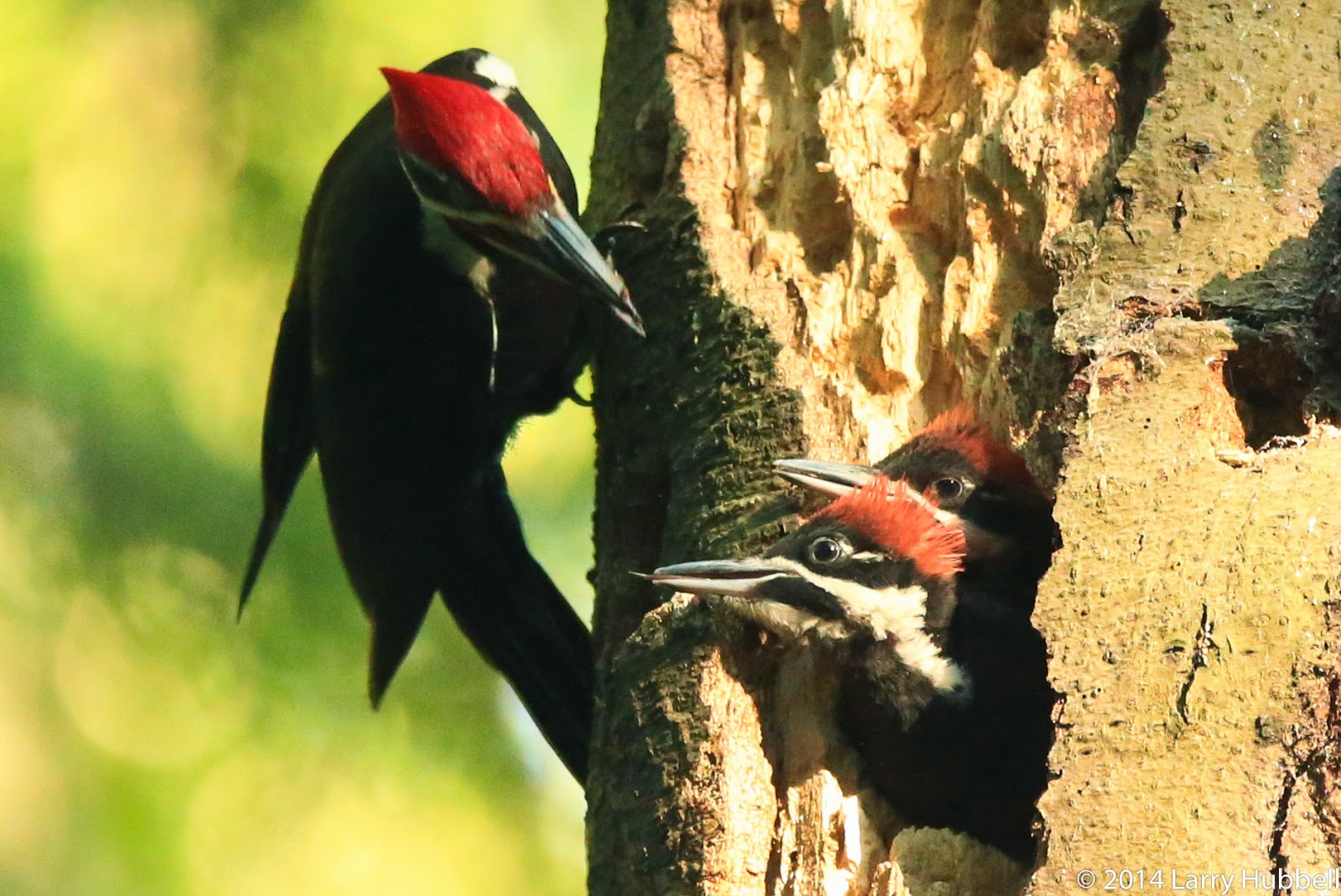 Once again Elvis and Priscilla (our pair of south Union Bay Pileated Woodpeckers) have young in their nest. Their reproductive success is particularly sweet this year given that the Barred Owls in Interlaken and the Bald Eagles in Broadmoor have not been so lucky. 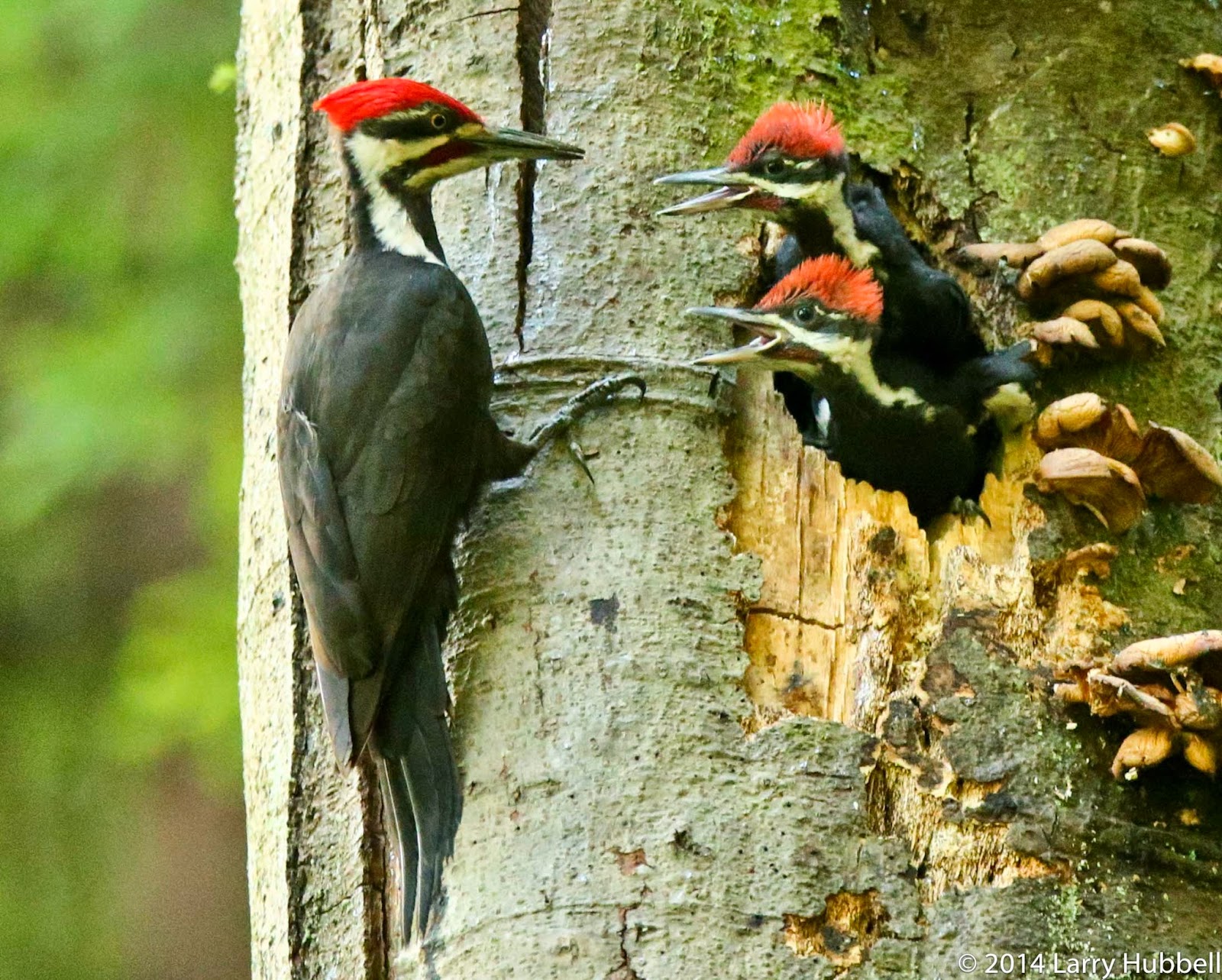 If you like a challenge compare the first photo to the second one. The second photo shows their 2013 nestlings. The first photo shows this year's young. Do you see any differences in the young birds? (Sorry, but the fact that last years birds have their mouths open does not count.) 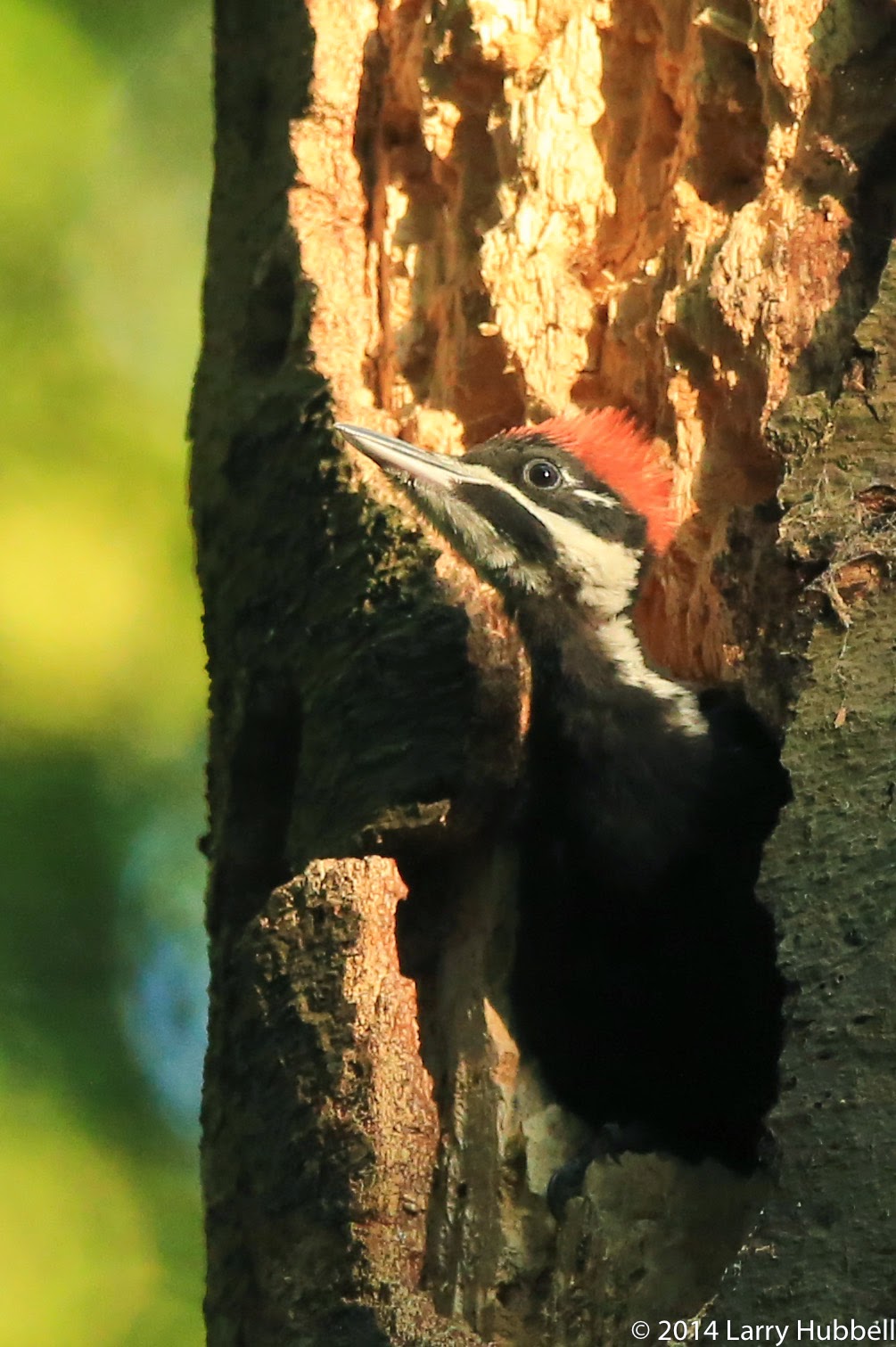 Here is a closer look at one of this year's nestlings and... 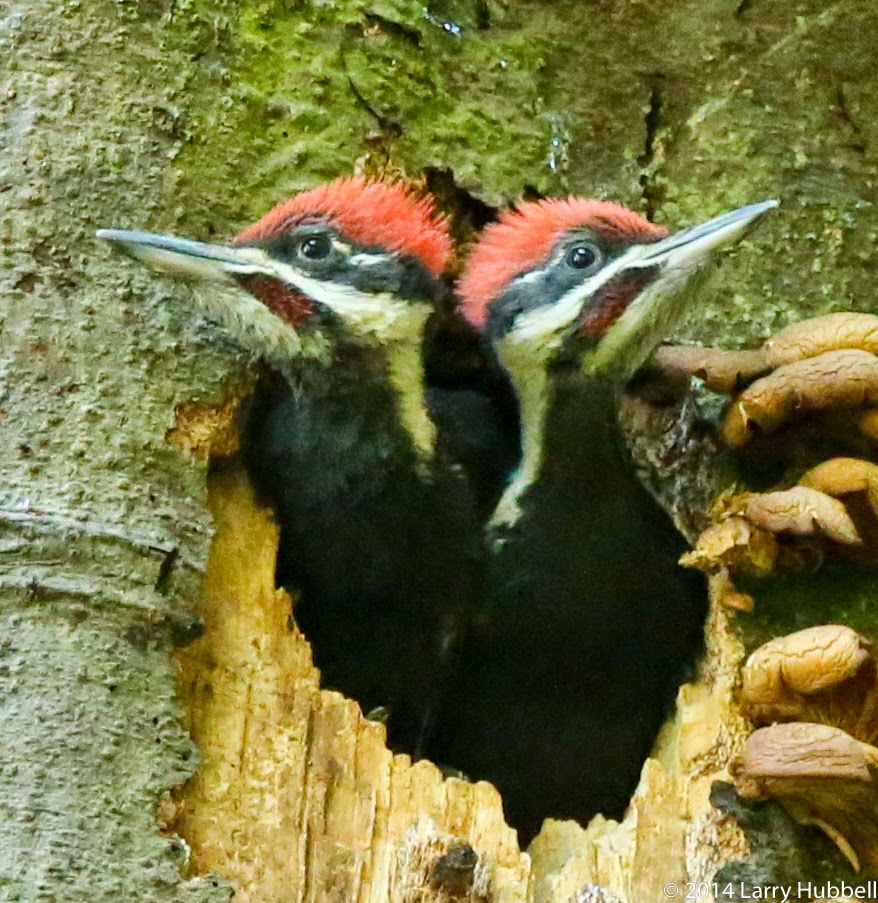 …here is a close up of last year's nestlings. 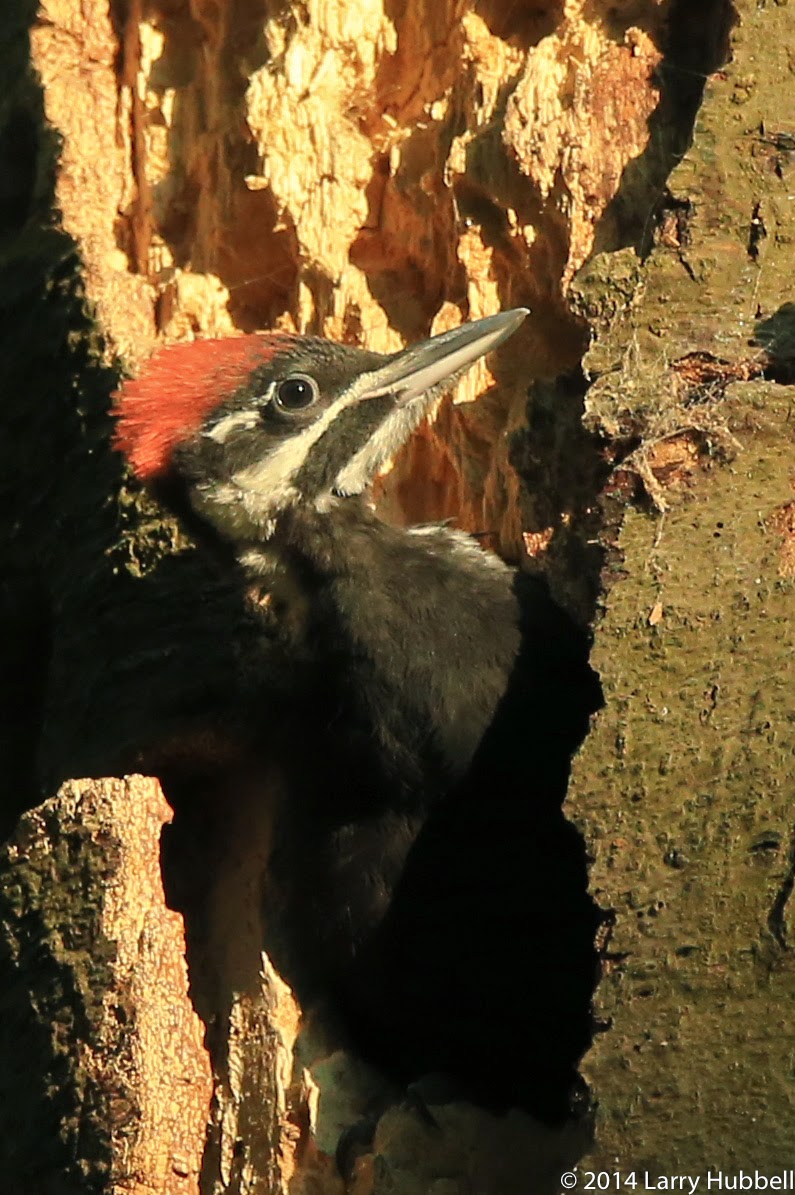 The difference is that last year both of the young birds were male and this year they are both female. You can tell because the females only have red on the very top of their heads. The males also have red on their foreheads and under their cheeks (in their malar stripes). 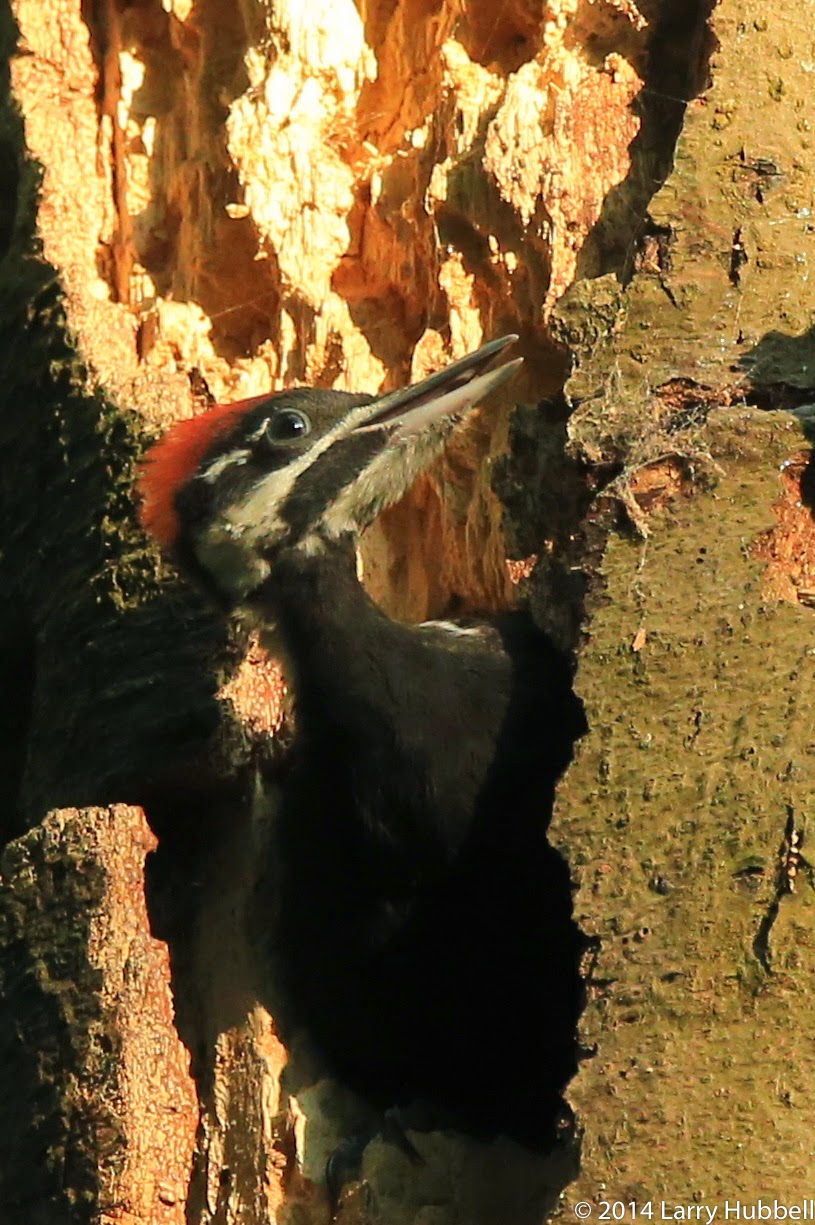 Anytime the parents return to the nesting neighborhood the young perk up and call out to be fed. 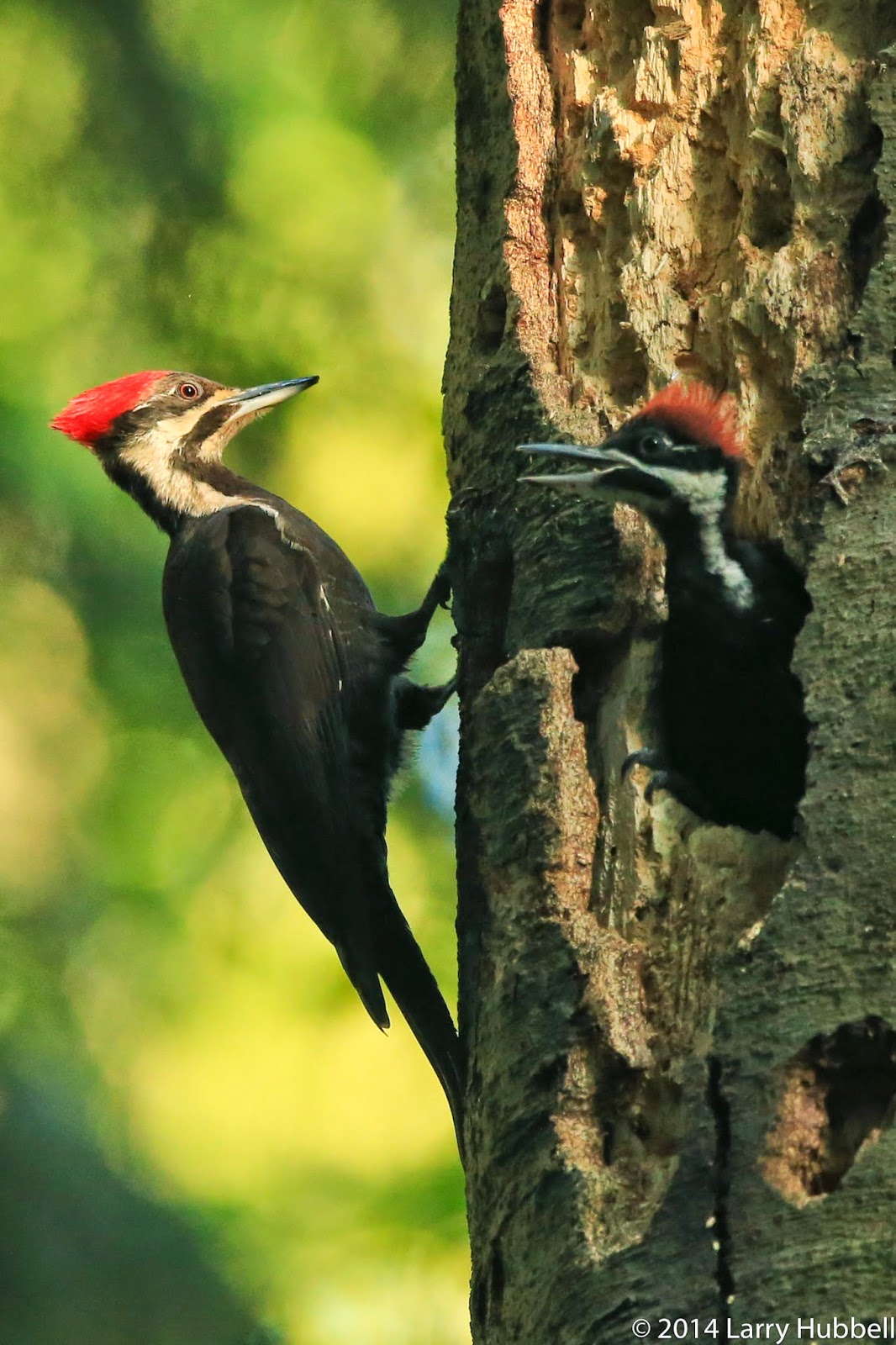 Almost always the returning parent brings food however it is not visible externally. Given what you know about male and female Pileated Woodpeckers can you tell if this parent is Elvis or Priscilla. 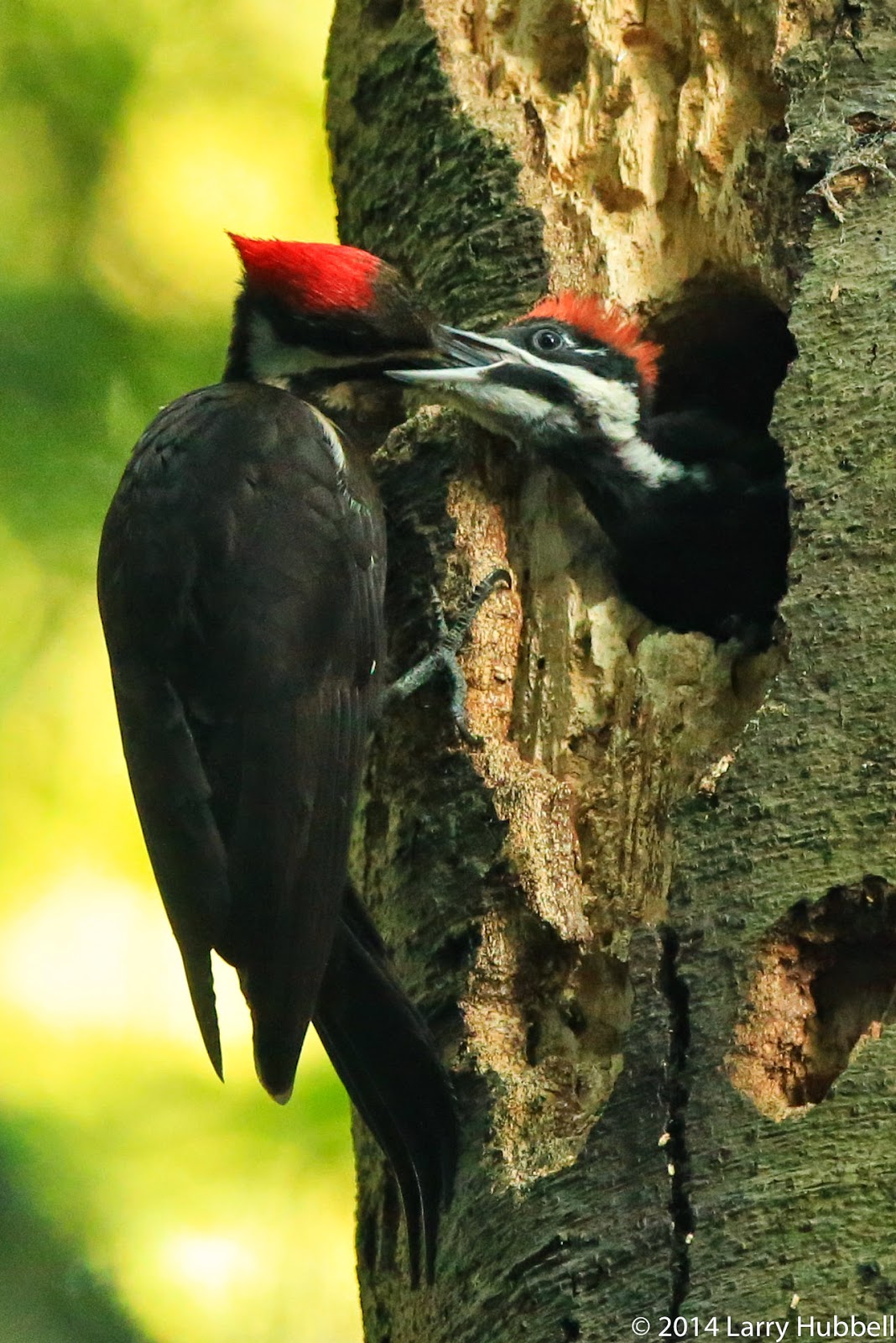 Priscilla delivers breakfast in the pileated version of a french kiss. Given that this year's nestlings are female, and we are calling their parents Elvis and Priscilla, it seems only logical to call the young ones Lisa and Marie. 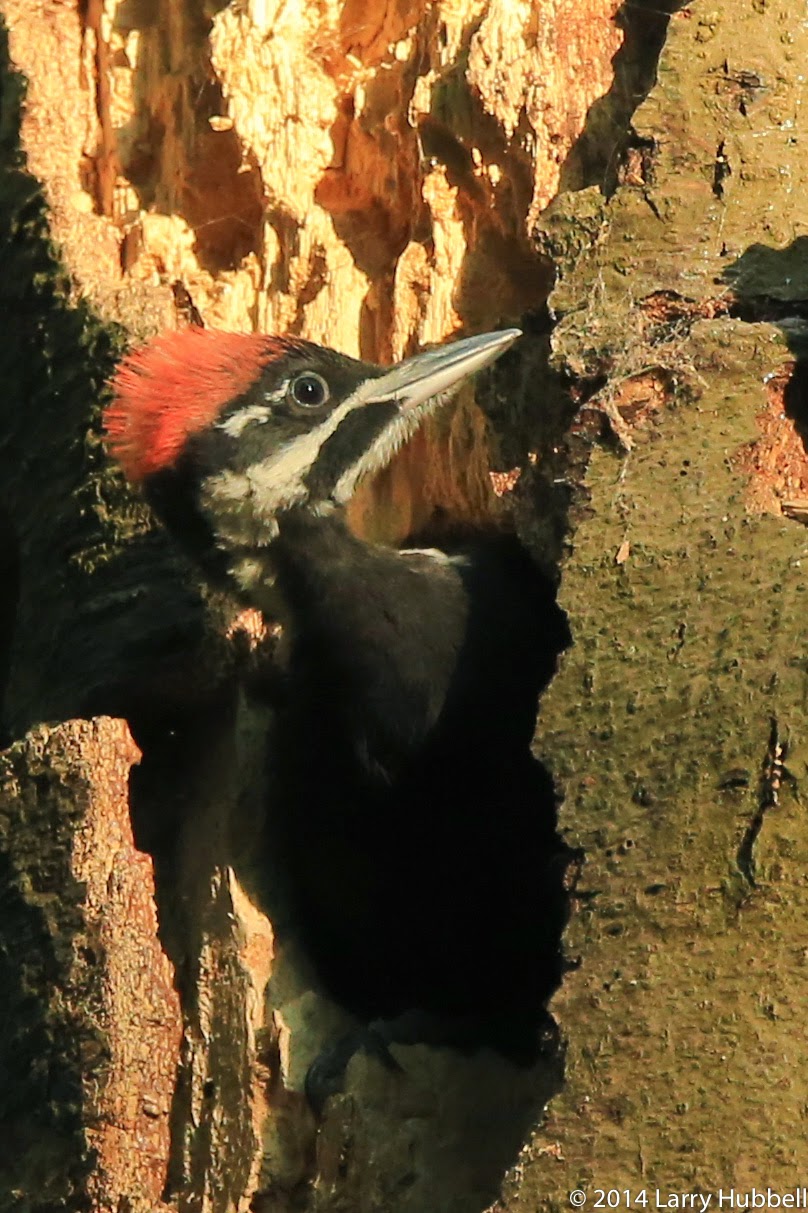 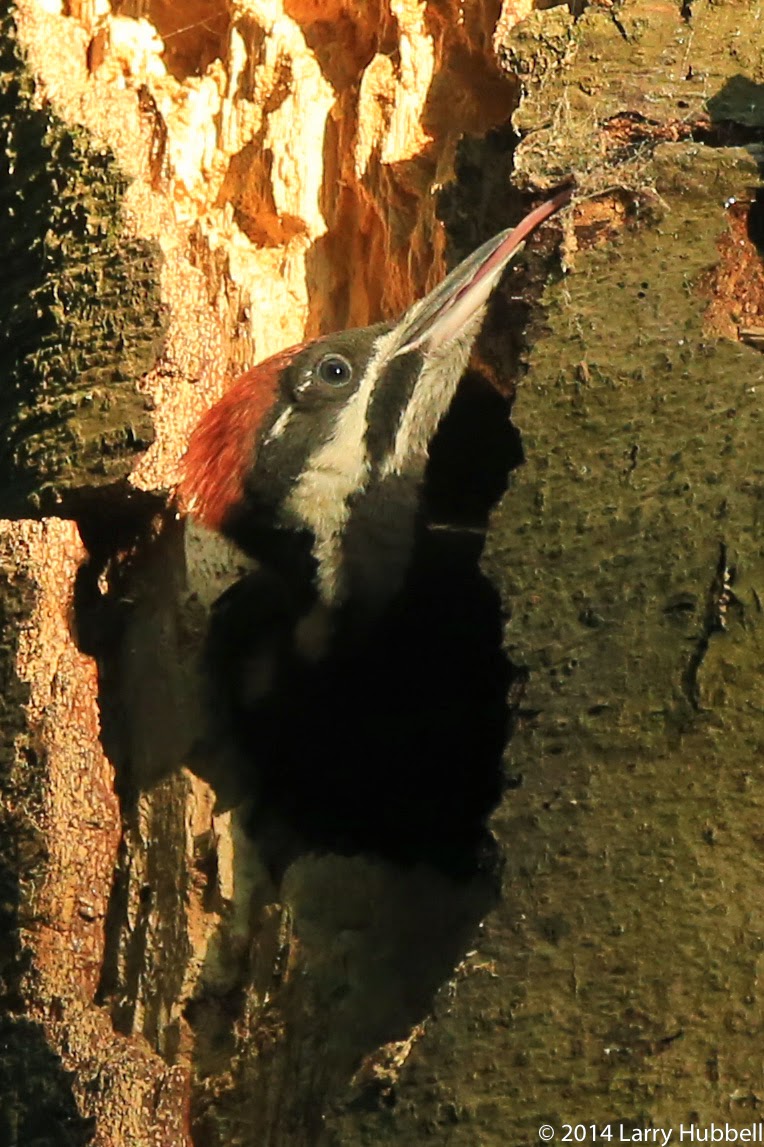 …and this one being Marie.

If you look closely at their "faces" can you tell them apart? Most likely their parents see each bird as totally different from the other in the same way humans can tell their children apart. The behavior of the young birds is also different as well. Lisa is louder and acts older and more dominant while Marie seems a bit more shy and quiet. It makes one wonder if Lisa will fledge, e.g. learn to fly, first as well.

One physical key to telling the two birds apart is their white "eyebrows". Lisa has a white, concave swish immediately behind her eyes and Marie has two small, white marks that look a bit like quote marks. If we are lucky enough to see these birds after they leave the nest these markings may allow us to track their movements a bit and learn how long they stay in the Union Bay watershed.

On a different note in the photo above Marie is sticking her tongue out. It is interesting how often the young birds use their tongues to explore the world around them. It is very similar to young children who want to stick everything they find into their mouths. It makes one wonder if the sense of taste is the most ancient and fundamental of our senses? Do all the creatures on earth have a sense of taste?

Here is another challenge. In this video of Priscilla feeding Lisa can you count how many times Priscilla sticks her tongue out?


After she finishes feeding she cleans her bill with frequent and fast, flickering, flashes. 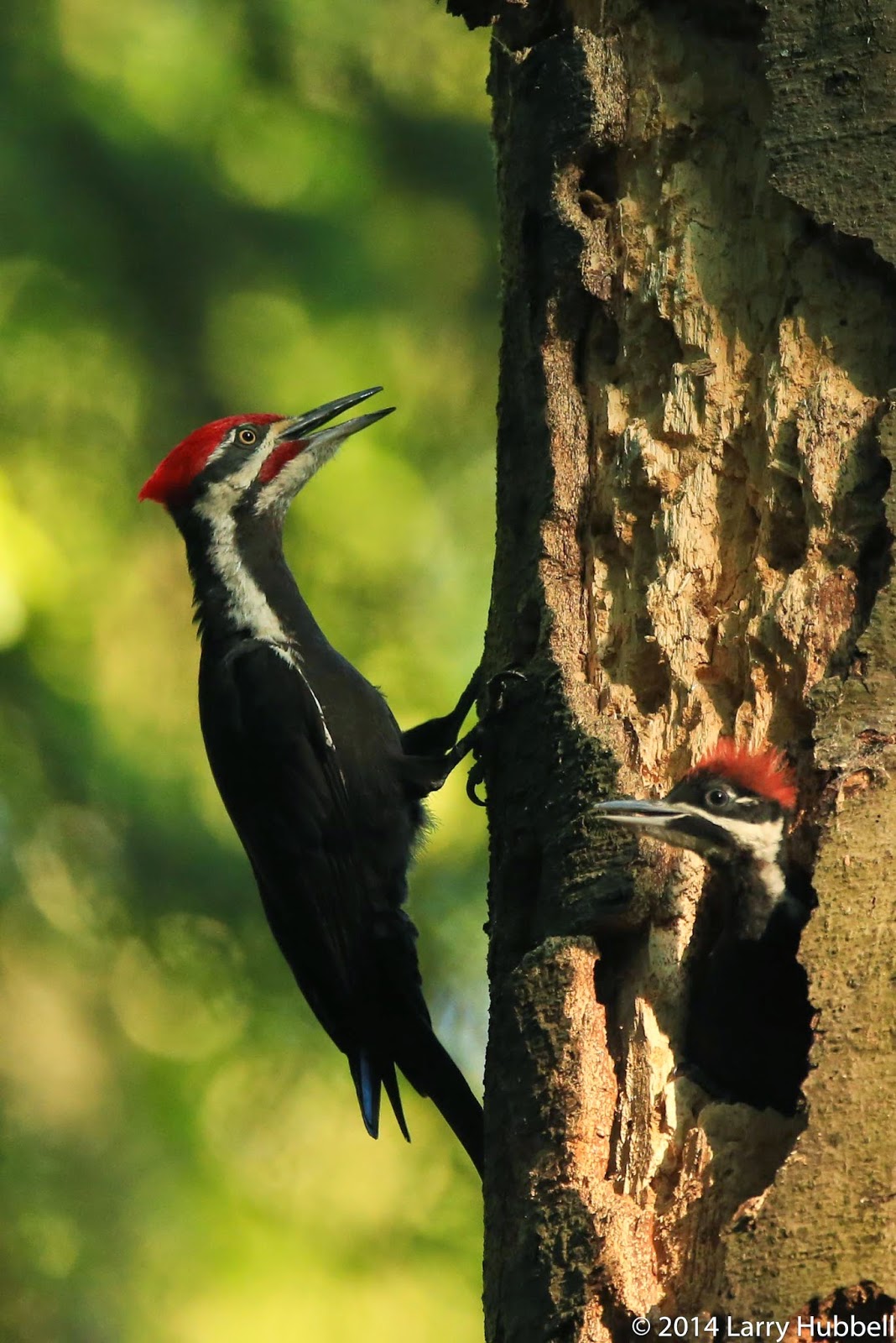 In this next sequence of photos can you tell which of the parents is doing the feeding? 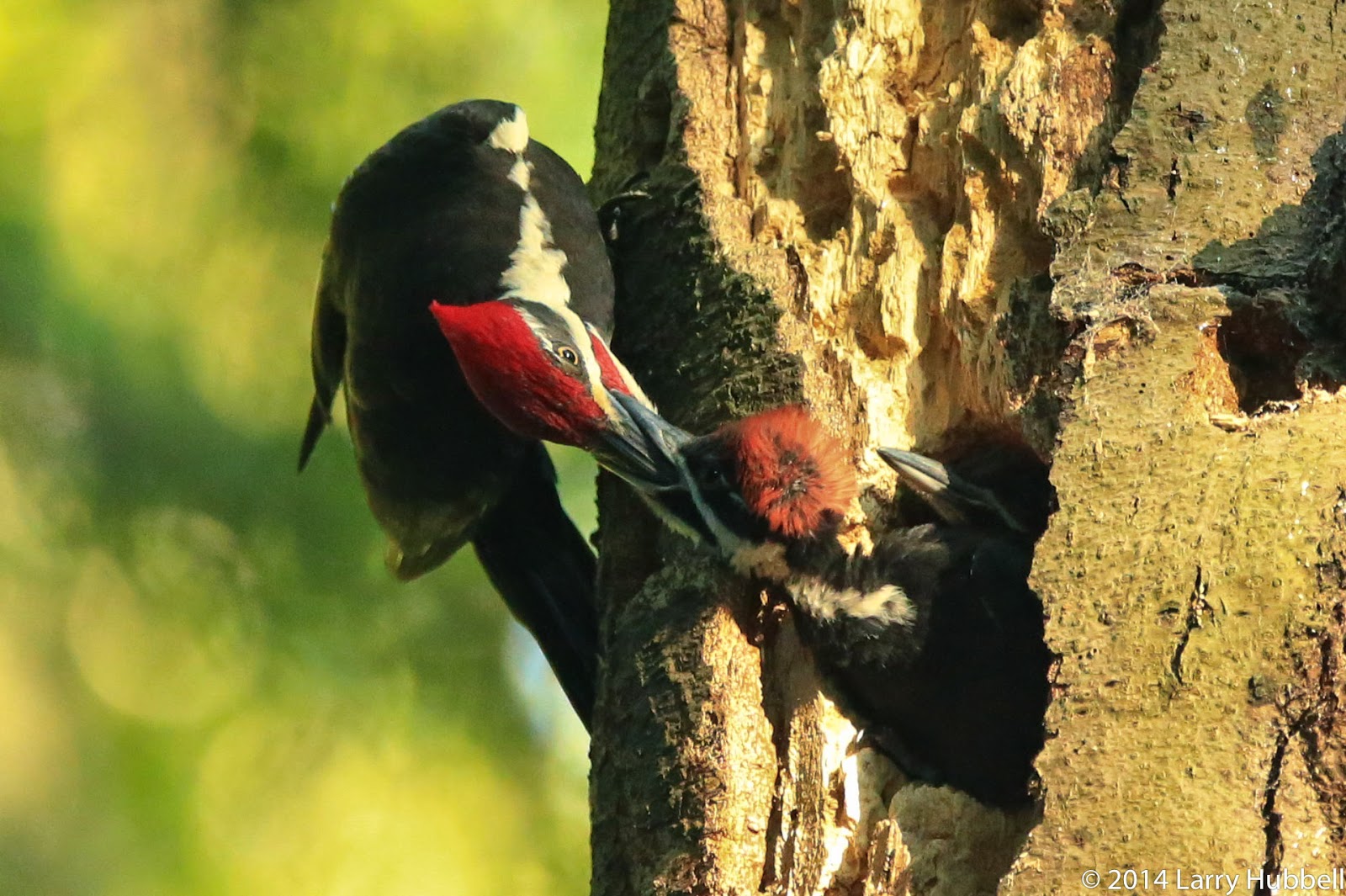 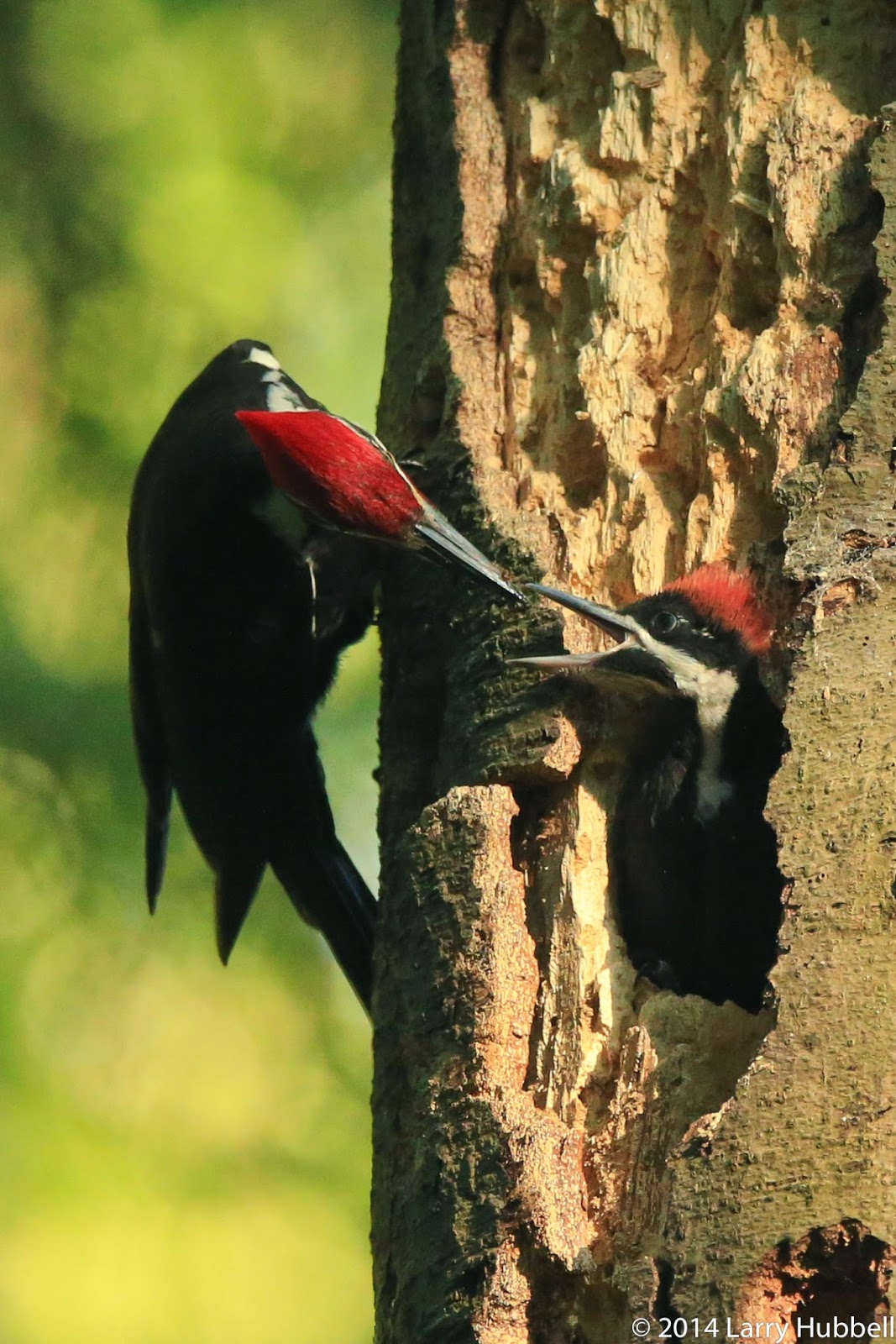 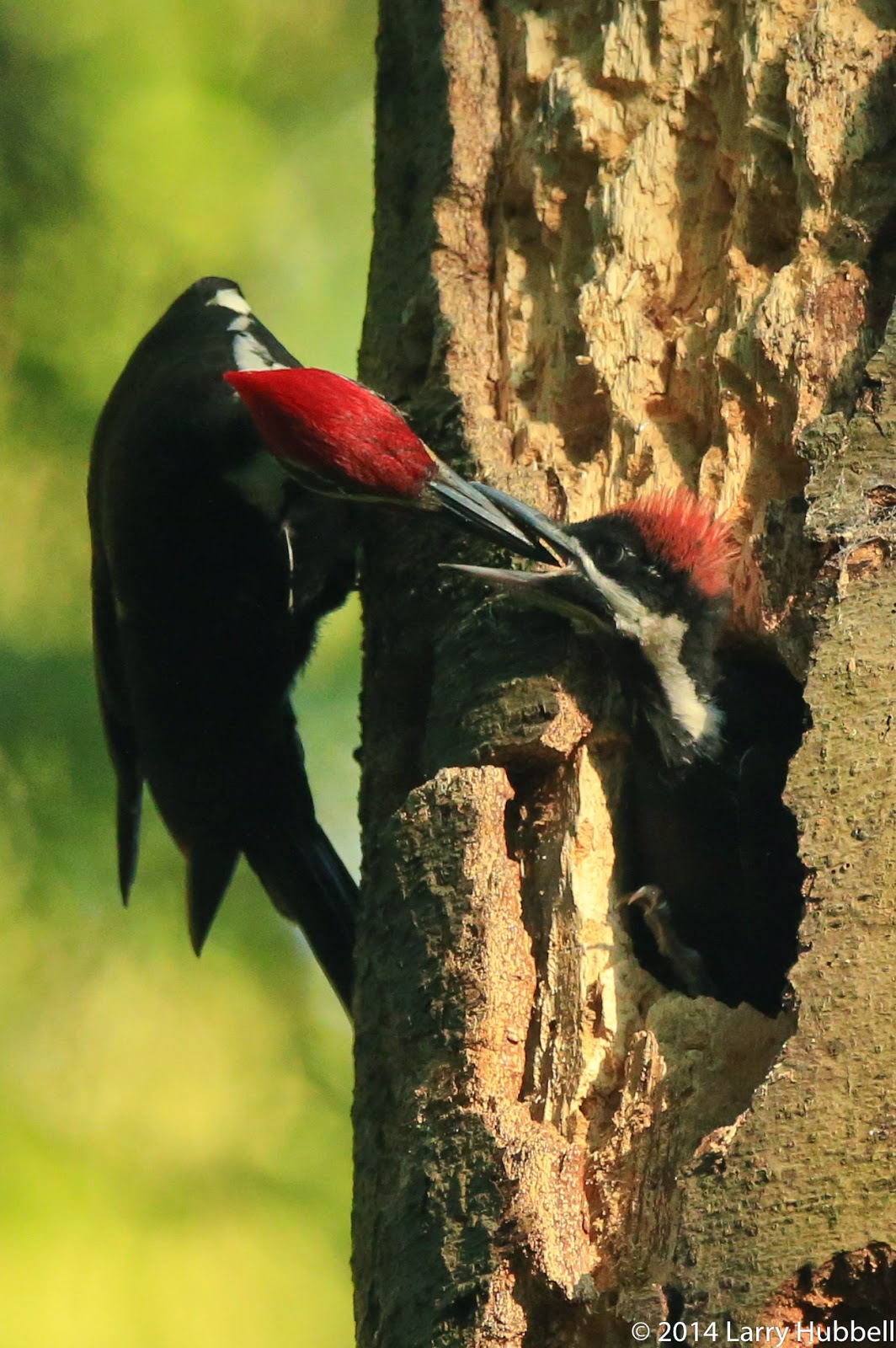 Can you tell whether it is Lisa or Marie being feed? 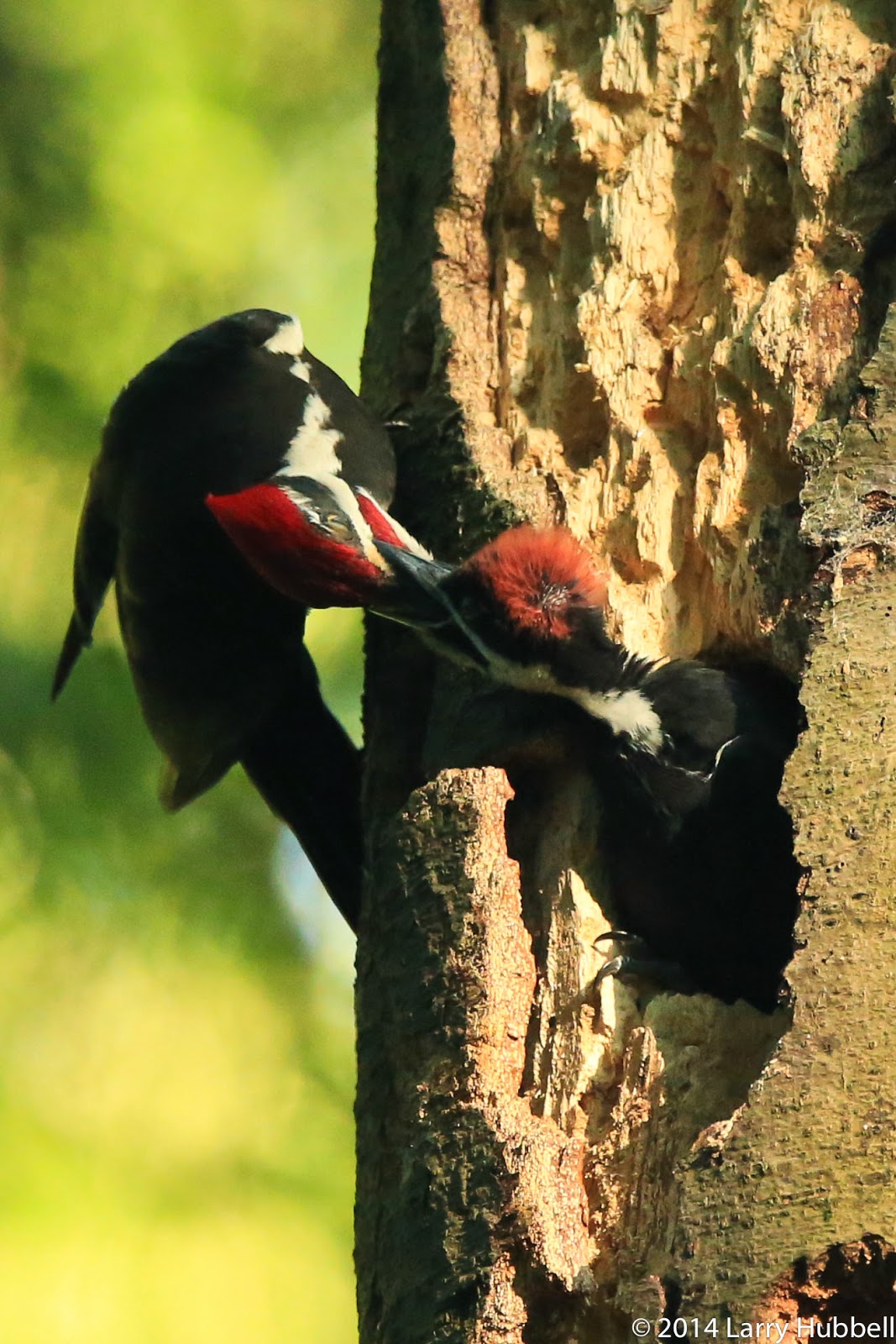 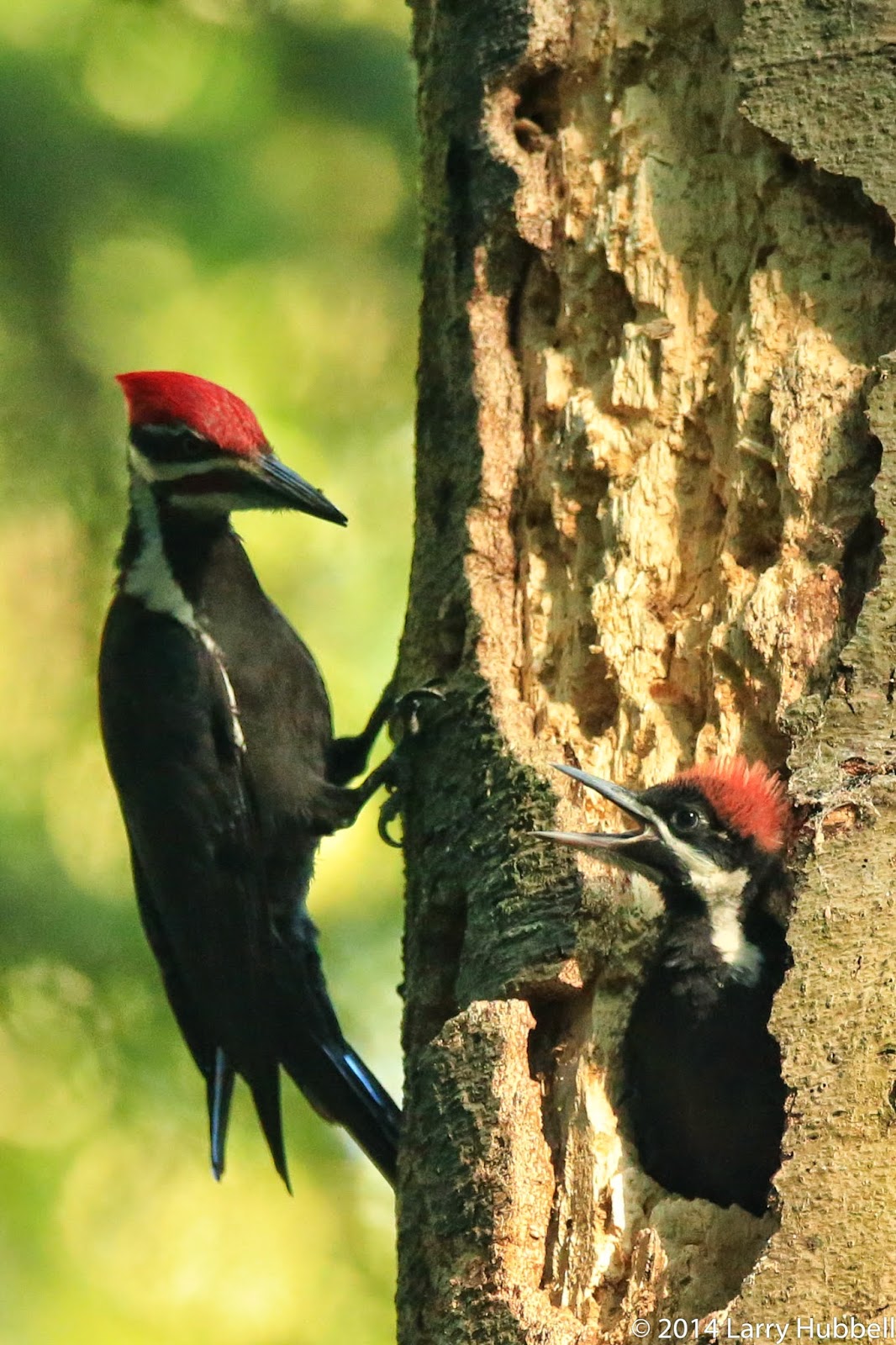 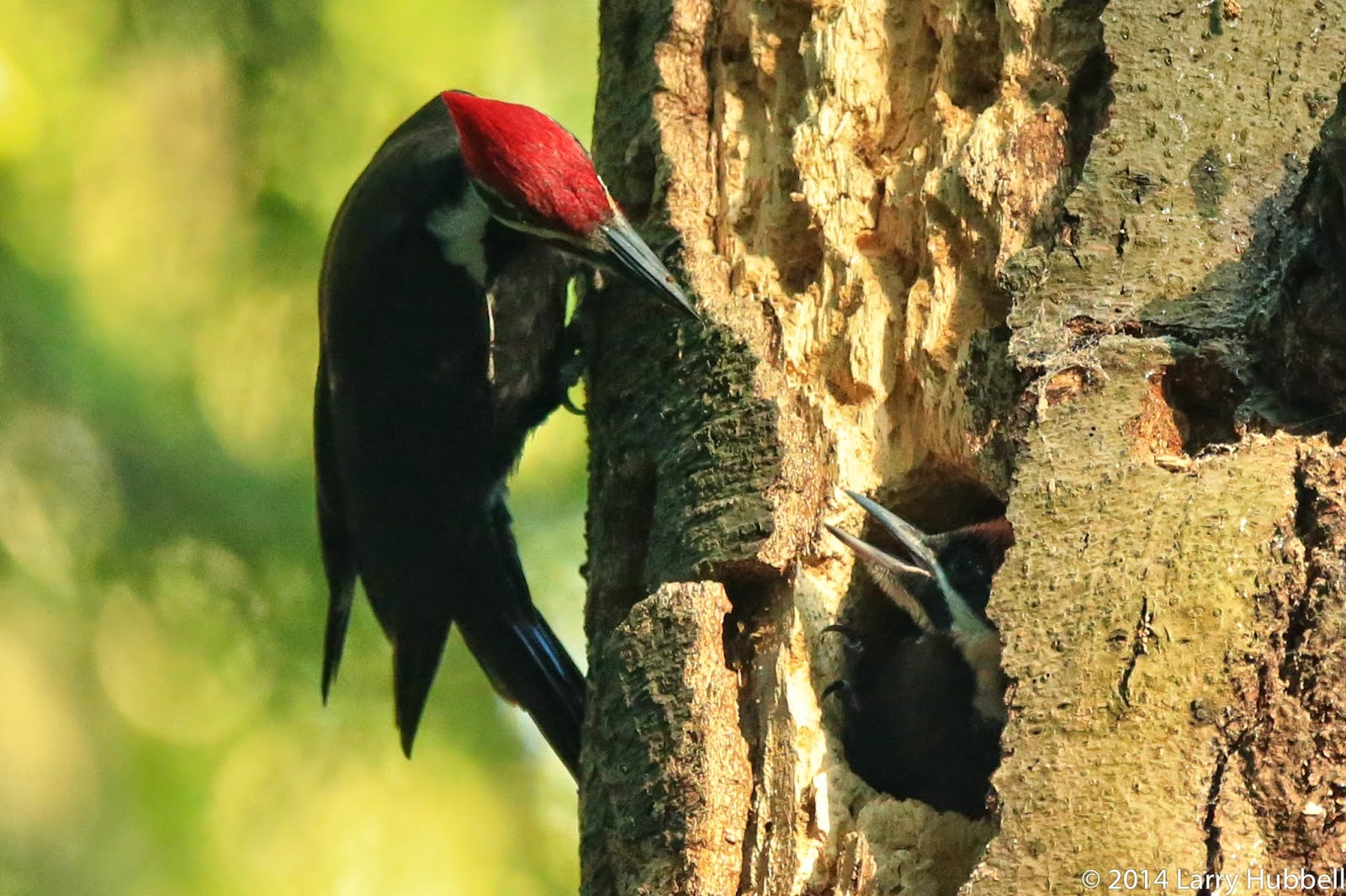 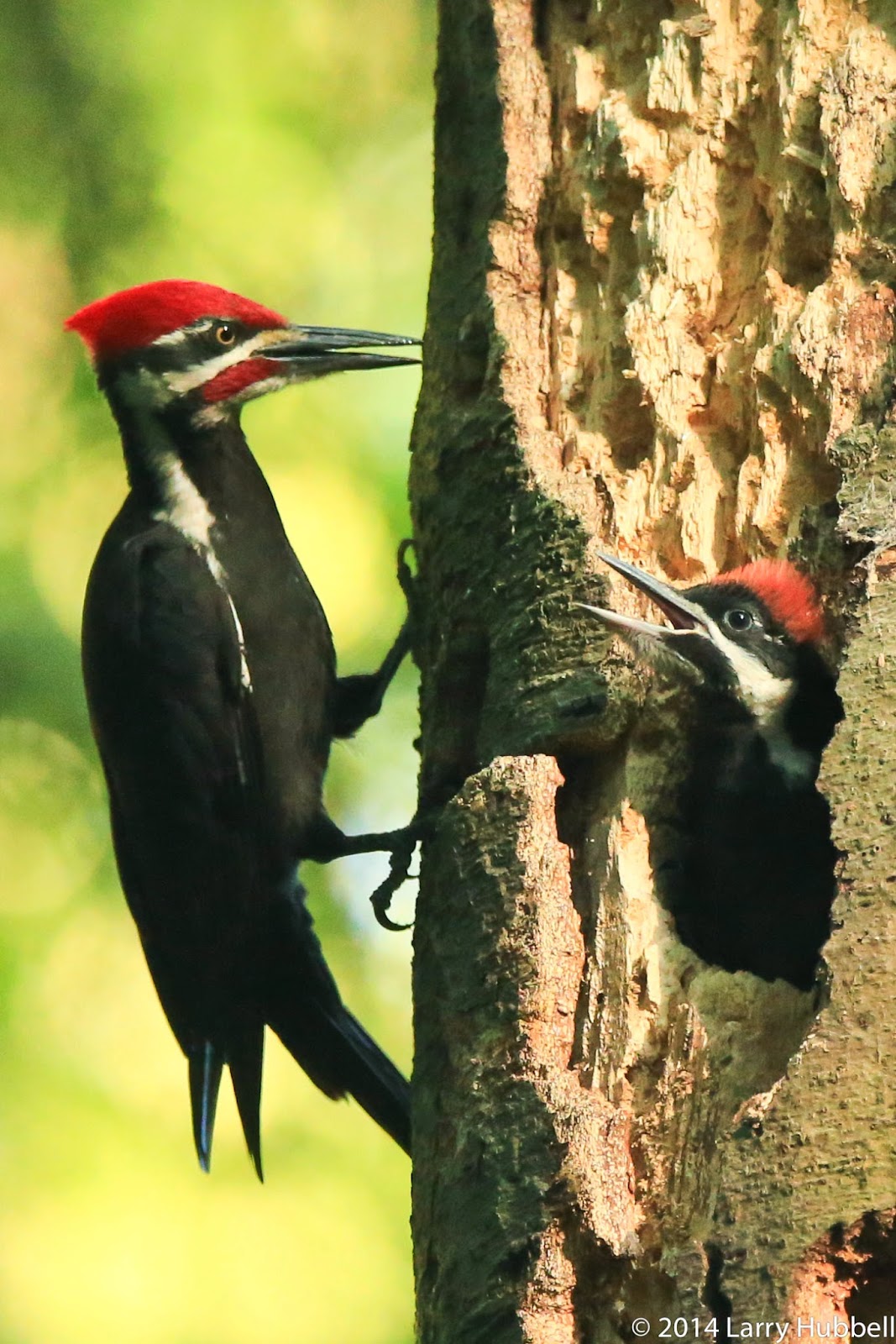 Most likely these young birds will be leaving the nest in the next week or so. Unlike eagles and owls these fledglings do not seem to spend time in the nesting tree branching out and strengthening their wings before they fledge. So one would expect that they are initially not particularly good at flying. 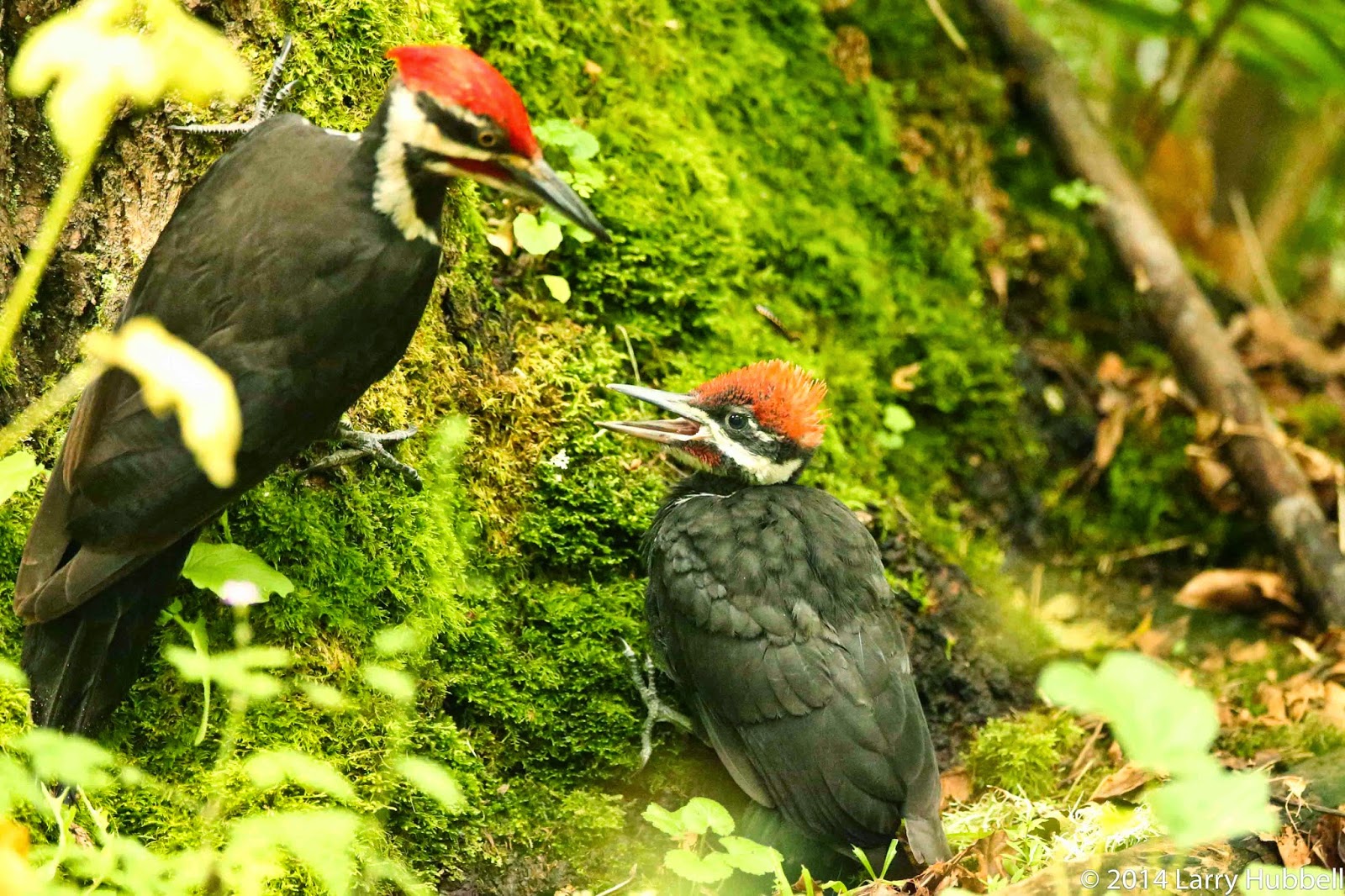 Last year just a day or two after it left the nest one of the young is on the ground (being fed) just a few feet from the trail where folks sometimes allow their dogs to run without a leash. Given the demise of the Barred Owl in Interlaken Park this year it would be especially sad if Lisa or Marie were to end up in the mouth of one of our neighborhood pets. The next few weeks will be critical for these young birds as they learn to navigate the dangers of our world.

Speaking of the owls earlier this week Susan Mullen graciously supplied this link to some good news about the use of rat poison.

If we learn to share our world our souls will benefit just as much as nature.

Bonus: Here is a link to a wonderful birding post from by a friend on Whidbey Island.