Earlier this month my friend and avid birder, Marcus Roening, lead a birding trip to "The Skagit". Skagit county is about an hour north of Seattle and extends from Puget Sound to north of Lake Chelan. So a trip to "The Skagit" could have covered a lot of territory. In this case most of our birding was west of I-5 and most of these photos are from the delta area that is Fir Island.

The short-eared owls and northern harriers often seen in this area were too far away to photograph but even the relatively empty landscape was worth a photo or two.

I just realized that the railroad that was built in 1886, where the Burke-Gilman trail is today, would have been as close as possible to the level shore around Union Bay. (Prior to the lowering of Lake Washington in 1916, when the Montlake Cut was completed.) It makes one wonder if the photo above is similar to how the University Village area looked two hundred years ago. 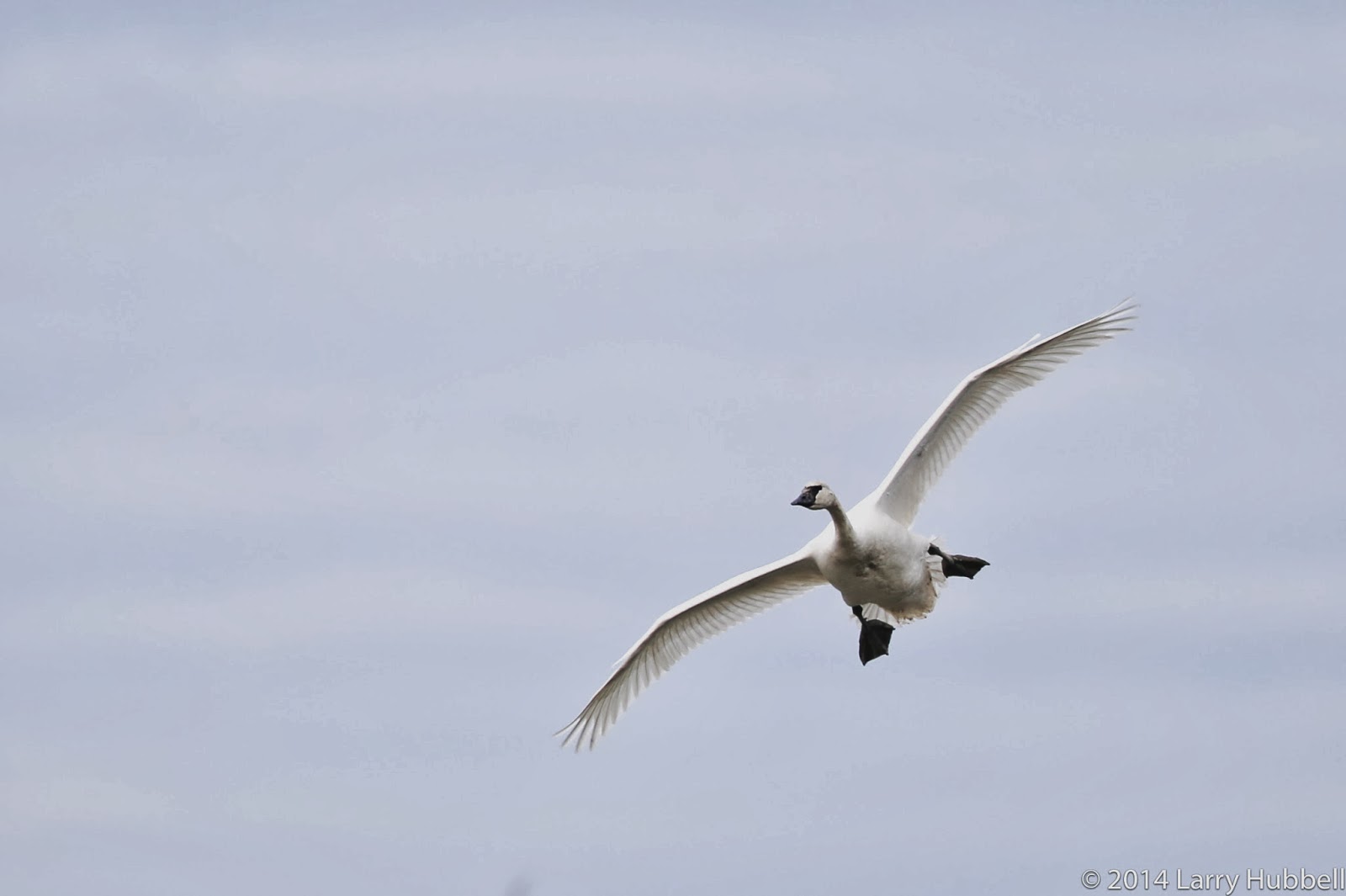 One of the first birds seen on our Skagit trip... 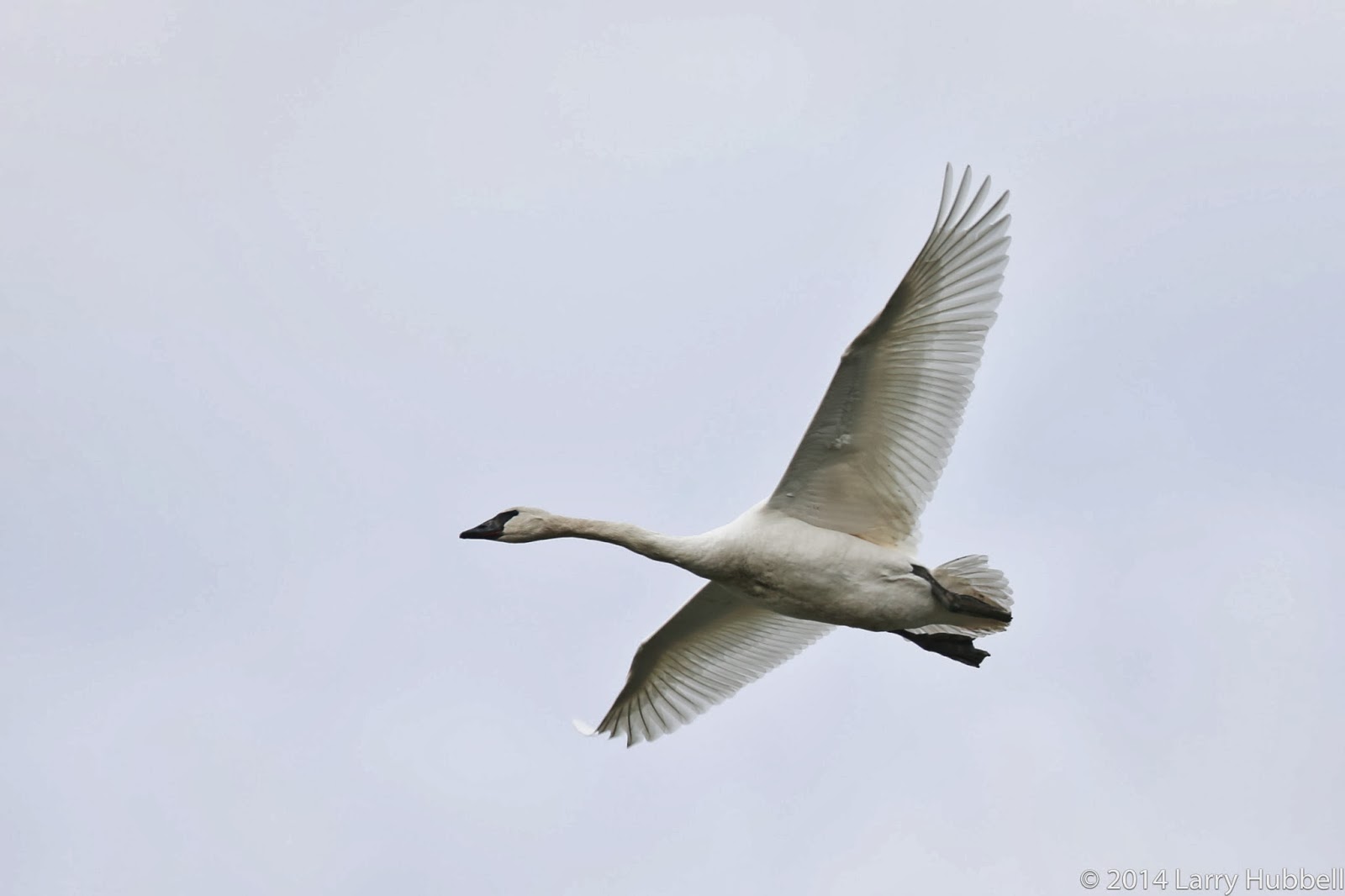 ...was this trumpeter swan.

There were bald eagles, hawks, pintails, mallards and many other birds but the highlight of the trip was the snow geese.

Every time an eagle would pass, the geese would take to the air.

Trying to look closer at a huge flock of snow geese can make one somewhat dizzy. Imagine a bird of prey trying to focus on a single bird with the constant flow of motion, the sound of their honking and a thousand wings drumming against the air.

Even on the ground a single bird can be hard to pick out. 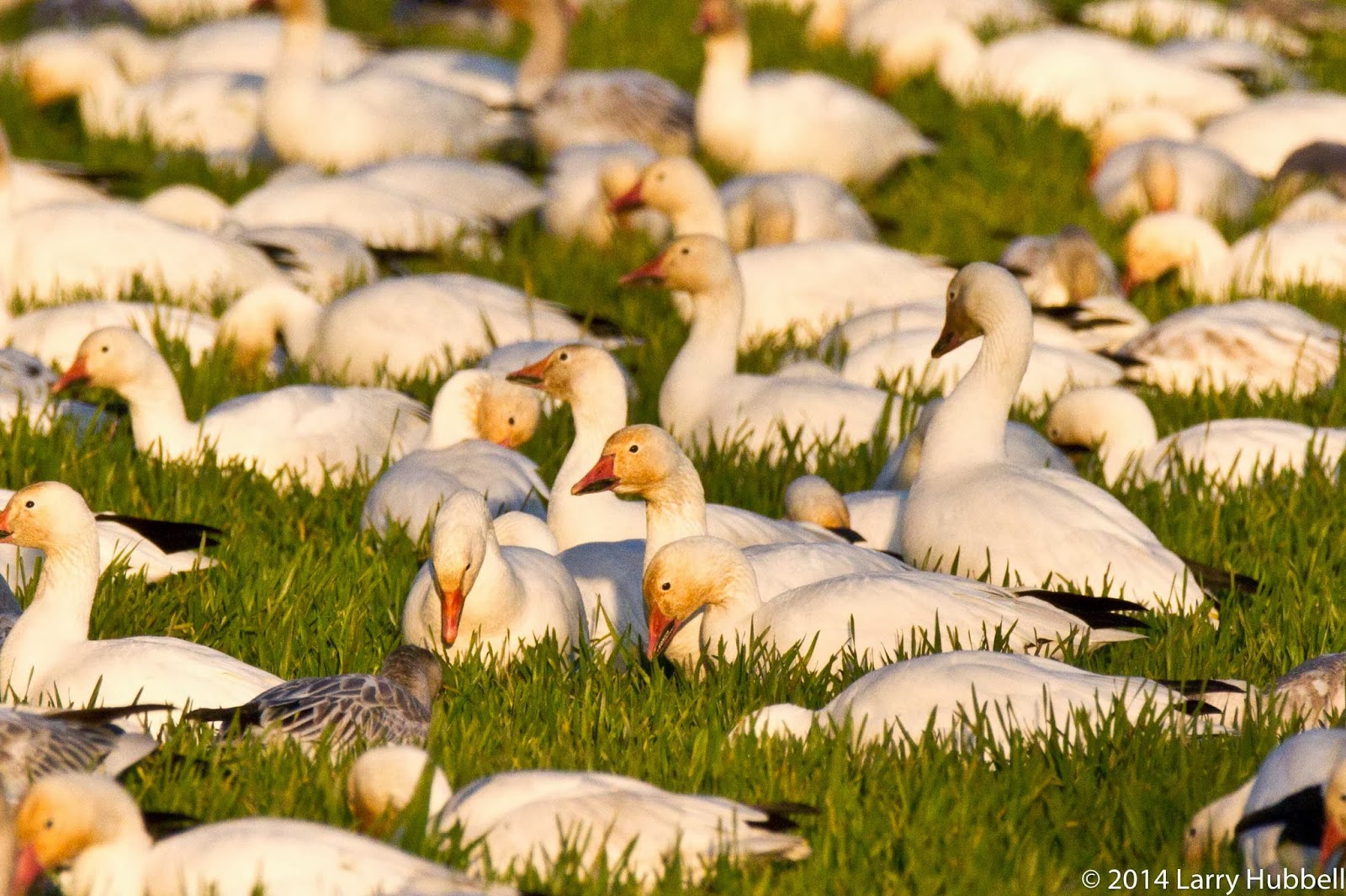 Once the danger was past they would settle down to feed. 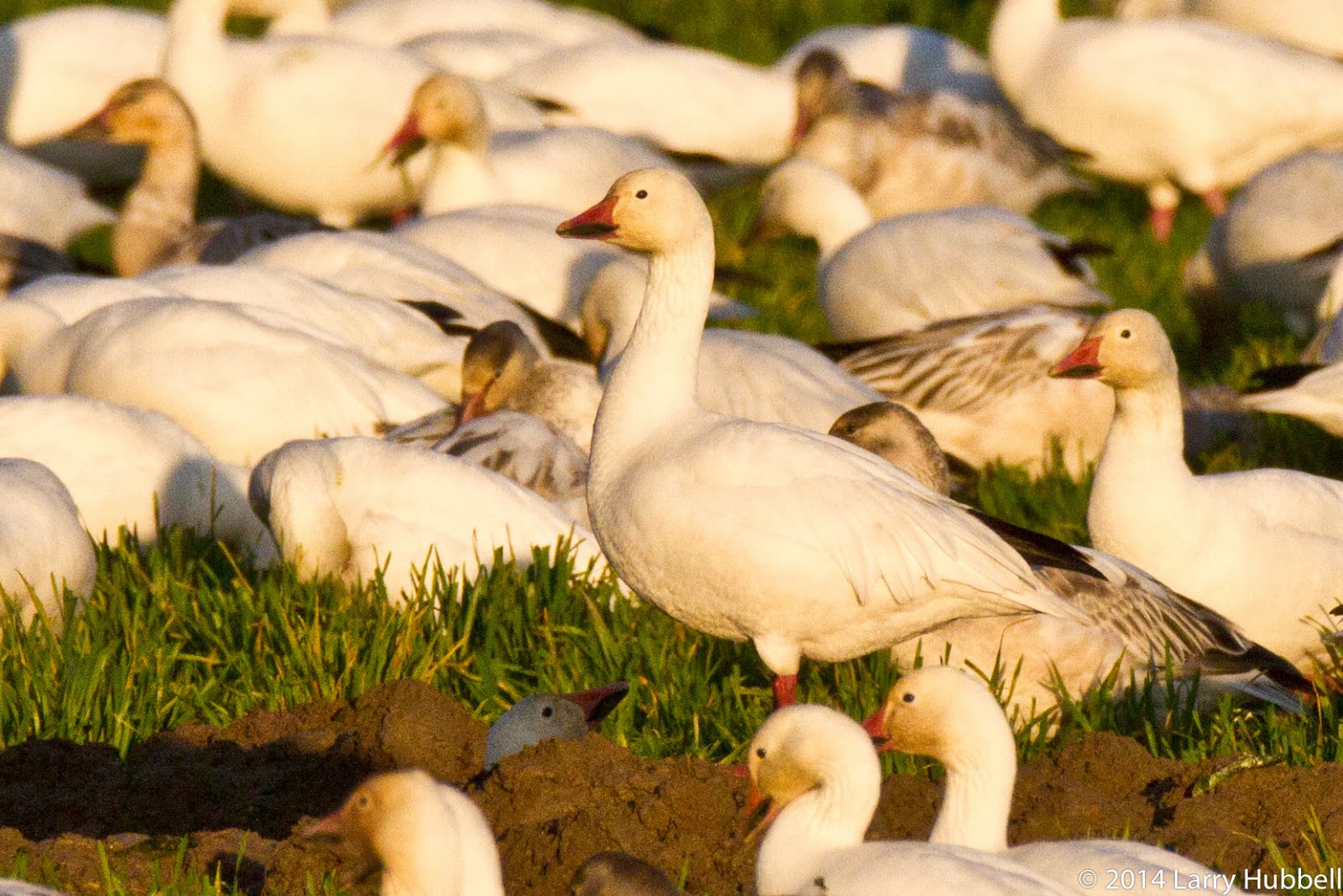 With patience it is possible to focus on a single bird, although did you notice the bird looking up from behind the dirt?

While feeding they alternate between having their heads down and being on alert for danger. 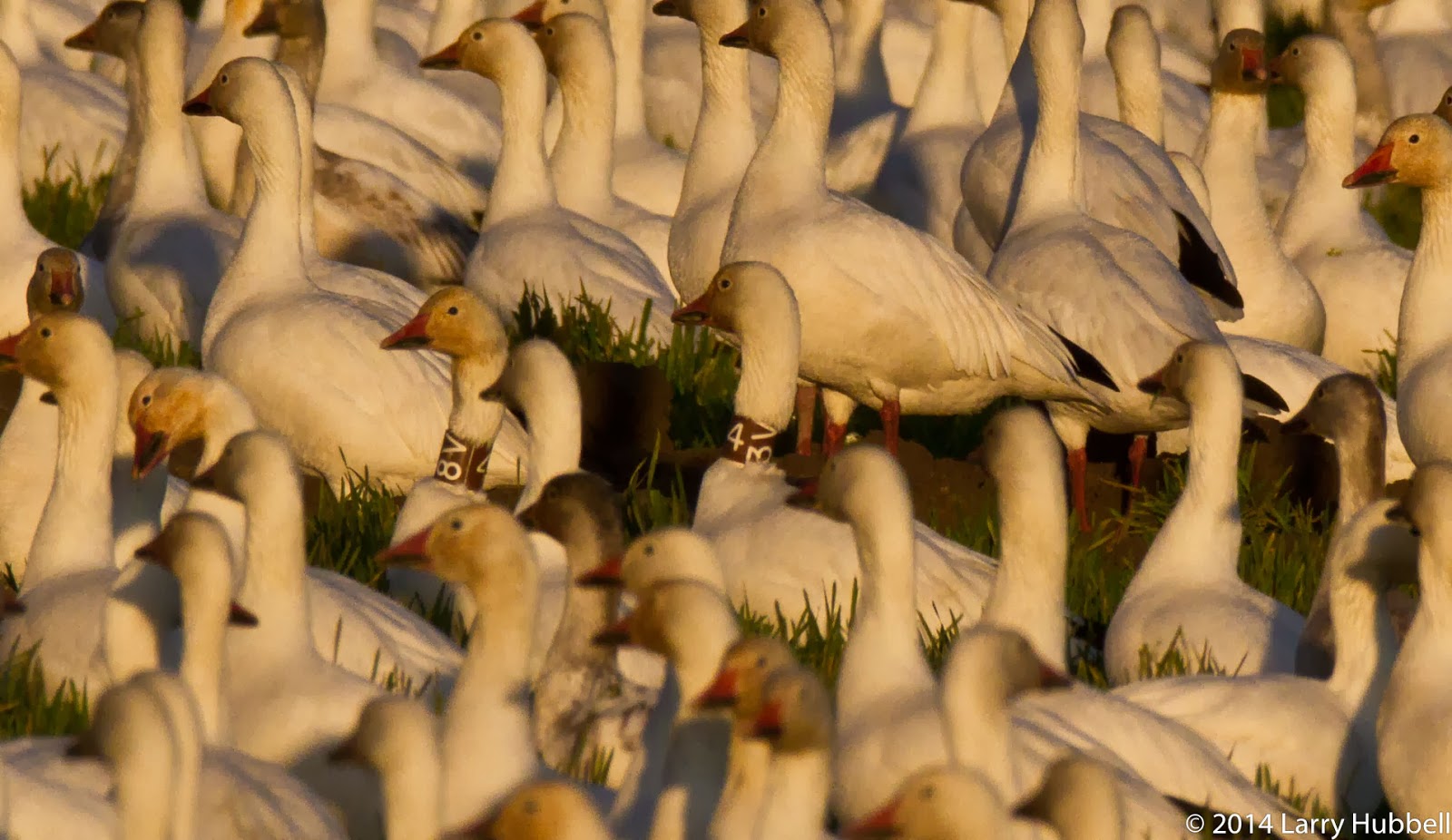 Curiously the two birds in the middle of this photo have (tight looking) bands around their necks. The codes have been reported to the U.S. Geological Survey and it will be interesting to hear (in a few weeks) about the study in which these birds are involved.

It is also interesting to look at the migration patterns of the snow geese. Cornell shows that they winter in spots along both North American coasts and what appears to be strategic wetlands dotted across the lower half of the U.S. and Mexico. Up north, their nesting locations are as close to the arctic as they can get. Their mapped migrations appear as four distinct north and south columns. One near each coast, one that looks to be just east of the Rockies and the largest one widely centered around the Mississippi Valley.

In 1916 the hunting of Snow Geese was outlawed due to their dwindling numbers. But now they have recovered so well that around 400,000 birds are hunted annually in North America.

Although I have never seen a Snow Goose near Union Bay there have been some sightings in the last few years. Usually just one or two birds, however in 2008 three different birders reported seeing at least 10 Snow Geese at the Union Bay Natural Area. None appear to have been reported this year. Keep your eyes open, you could be the first to see one. 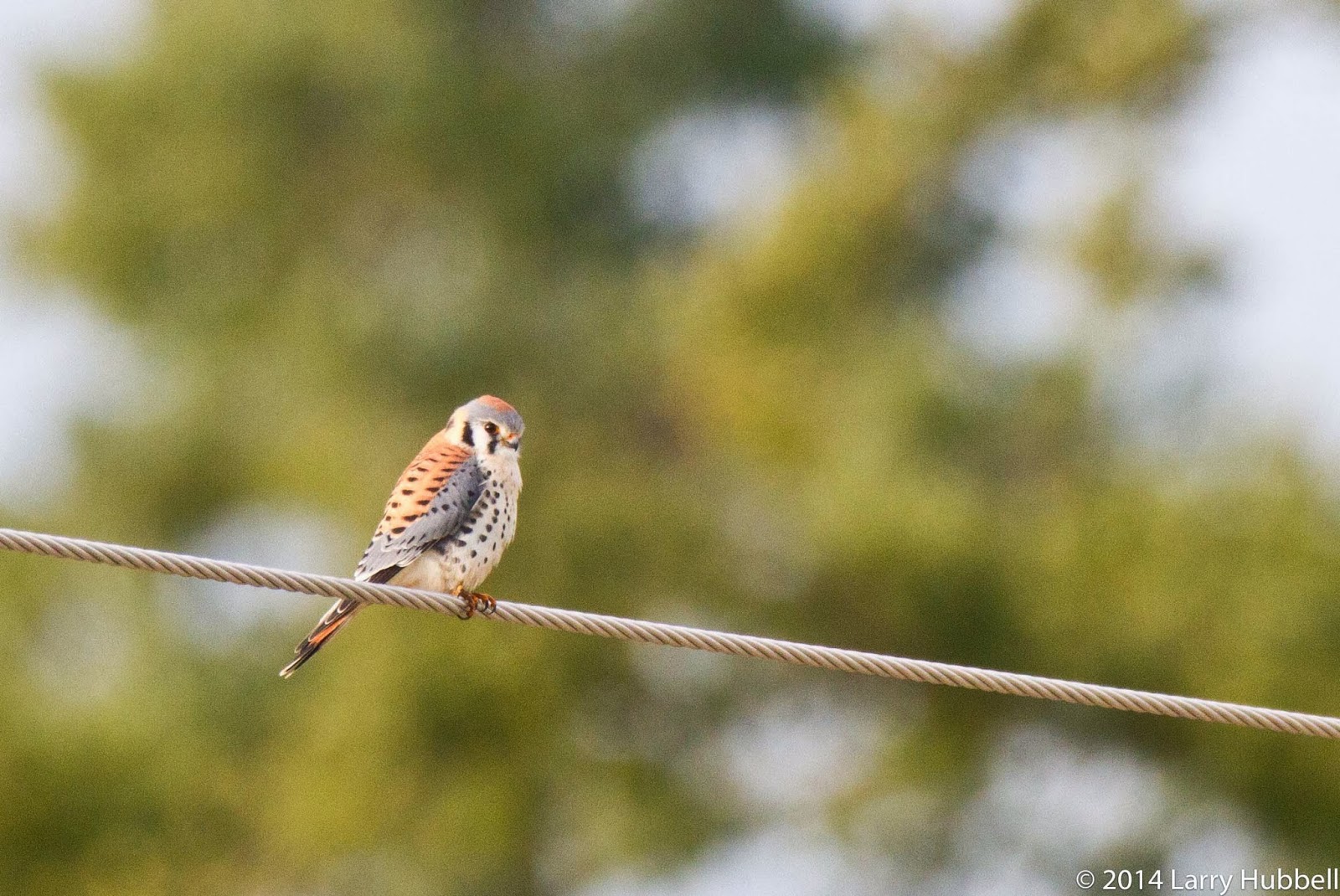 Late in the day this colorful little kestral was spotted on a distant wire. The photo is a bit fuzzy but the colors are just too beautiful to keep to myself. Ebird shows no reports of kestrels near Union Bay. Wouldn't it be wonderful to have them return someday.

This week near Union Bay I have seen crows flying with nesting material. Eva was spotted sitting in her nest, most likely working on "sprucing" it up. Yesterday, green-winged teals were whistling and bowing to their mates. In spite of the grey, cold and wet these are all hints that spring is coming.

Have a great day on Union Bay...were nature lives in the city!

Posted by Larry Hubbell at 3:04 PM