Fort Worden and The Ancient Eagle? 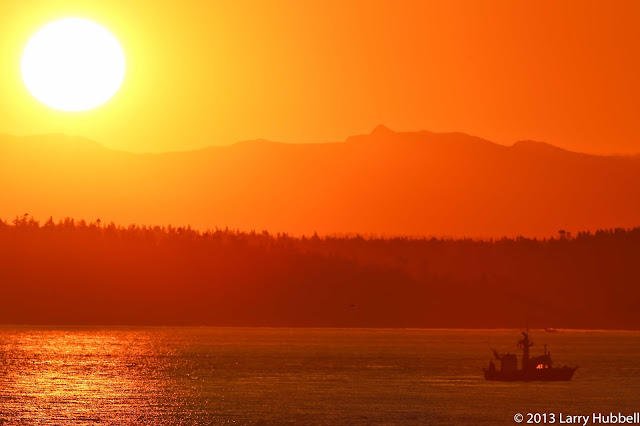 The sun rising over Admiralty Inlet on Tuesday.

Visiting Fort Worden, which is strategically located where the Strait of Juan de Fuca meets Puget Sound, has been an annual excursion for our family and friends for over 20 years. During the last century Fort Worden has evolved from a place of great destructive power to a state park where nature is preserved in the forest and the water. In particular the Marine Science Center (MSC) has many special creatures to view.

However it was the wildlife outside the MSC that was most impressive. For example follow the link below to see a rather surprising jellyfish. Can you guess what it is called?

In 1992 boxes were installed under the Marine Science Center to provide homes for Pigeon Guillemots. By studying these birds scientists are learning about the health of Puget Sound.

Photographically, the most curious thing about these birds is their mouths. The inside glows as if they have a fire in their belly. 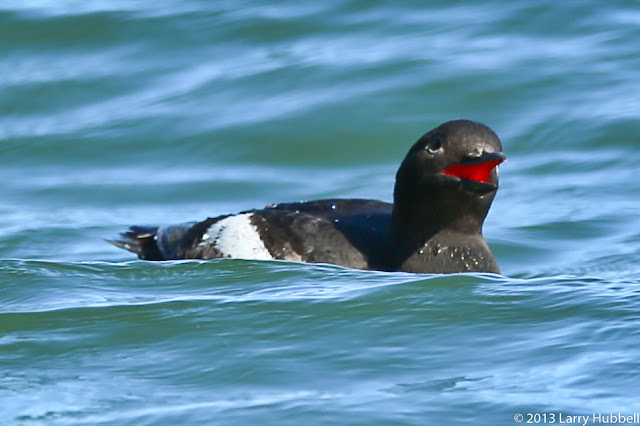 While boaters were out on the water fishing for King Salmon this Kingfisher was back at the dock looking for smaller "fish to fry". 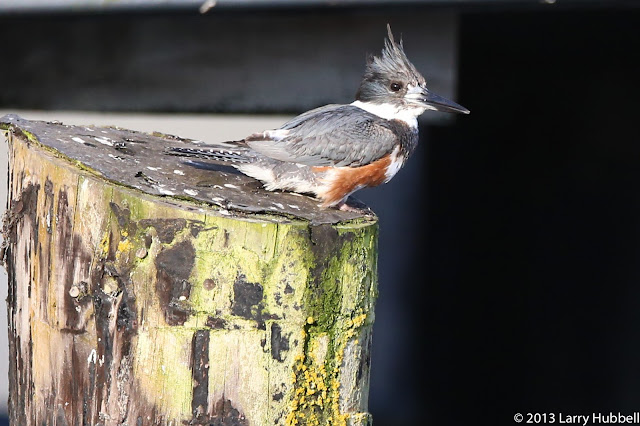 These gulls take a different approach to fishing.

Still the most impressive, but somewhat awkward, creature around the dock was this young Bald Eagle. It takes as many as five years for a Bald Eagle to mature and this one is most likely somewhere in the middle of that process. 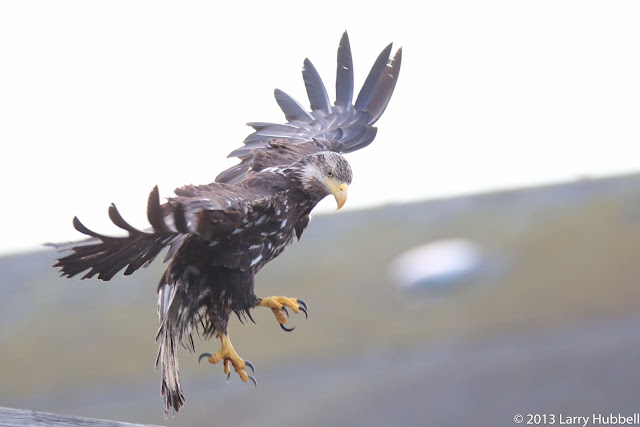 Not all the wild creatures around Fort Worden are found near the water. 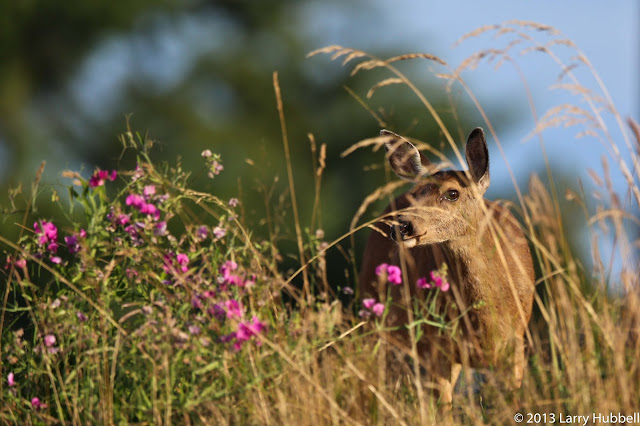 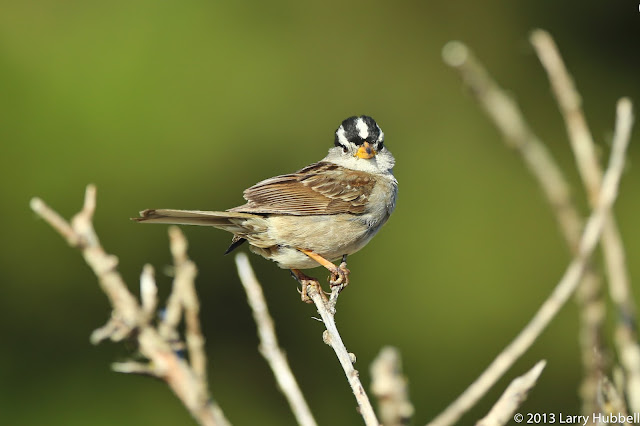 Still the most compelling story from Fort Worden may be about the nesting pair of Bald Eagles. Last year this eagle was photographed in a tree top over looking the Strait while its mate was tending to the egg or eggs in the nest. Neighbors living just west of the park told how the male eagle did not appear to be bringing the usual quantity of food to the nest. 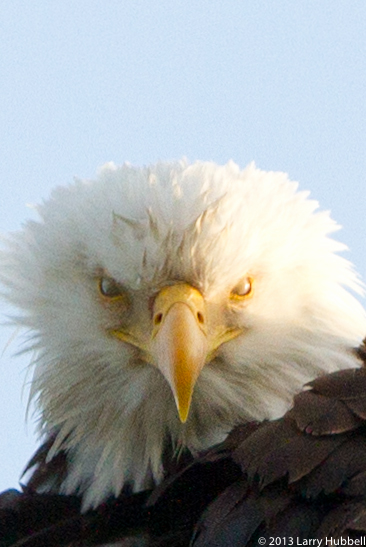 Note: In the photo above the eagle appears to be using its nictitating membranes to moisten its eyes. The wind along the Strait can be rather brisk and whisk away the moisture.

Given the neighbor's eagle observations the first thought was that maybe the male eagle was experiencing an age related slow down. Bald Eagles, which mate for life, can live for over 25 years in the wild. Is this what an old eagle would look like?

This year when I returned to check on the nest another neighbor explained that about 2 to 3 months ago the nesting tree broke and the nest fell.  She said the nest seemed to disintegrate on impact. She also mentioned hearing a distraught eagle making mournful cries near the nesting site in the days afterwords.

While searching the area for any sign of the pair only one mature eagle was found. 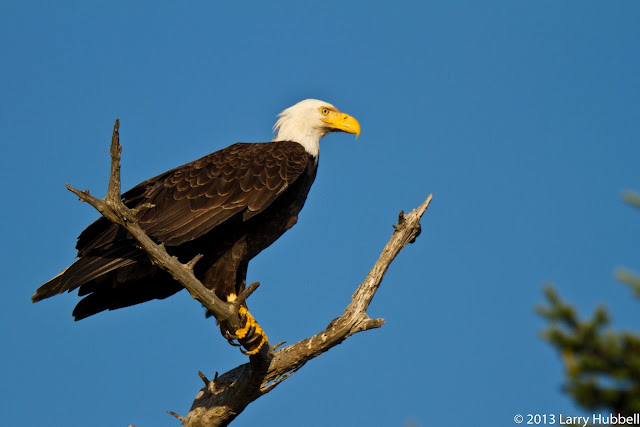 This eagle was seen daily and it appeared to be patrolling the waterfront along the Strait between the nesting site and Point Wilson. Initially, from the right side, it appeared healthy and normal. However seeing the bird from the other other side brought a number of questions to mind. 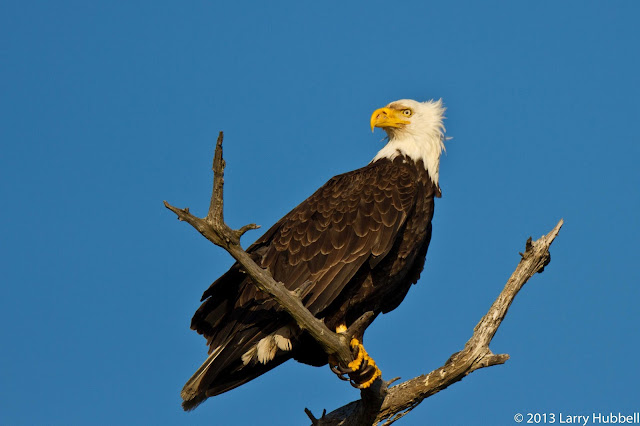 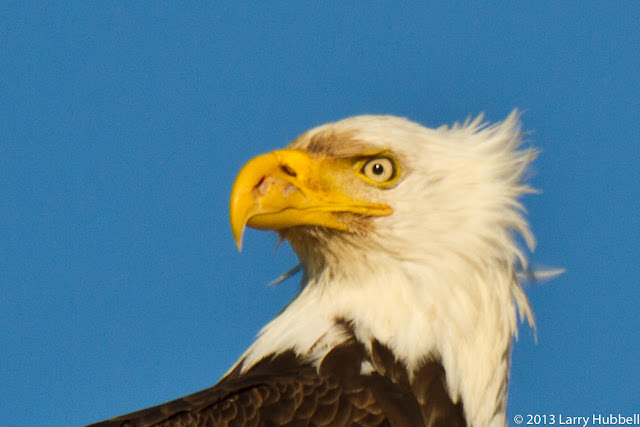 How was this bird injured? Was it defending its territory from a younger bird? Was it sitting in the nest when it fell? Do the scars on the beak and the heavy discoloration of the facial feathers imply this is an elderly eagle? Is this the male from last year? If so, after the poor support and the loss of the nest, has the female given up on the idea of mating for life? If the female does return will they build another nest next year? Will the nest be in the same territory? On the other hand, Is this the female that might have been in the nest when it fell? If it is the female where is the male bird?

If during the next year, you should happen to find yourself walking the northern beach at Fort Worden, please watch for a pair of mature Bald Eagles building a nest. You might consider bringing your binoculars so you can spot the "Ancient Eagle" (look for the scars on the left side of the beak). One thing is for sure this bird should be easy to identify when we see it in the future.