Last week's post showed a flicker who chased a wood duck away from a nest. (Click here to see the post.) Curiously, the nesting cavity was an old site that the flicker had already decided not to use. This is proven by the flicker building a new nest in the same tree. 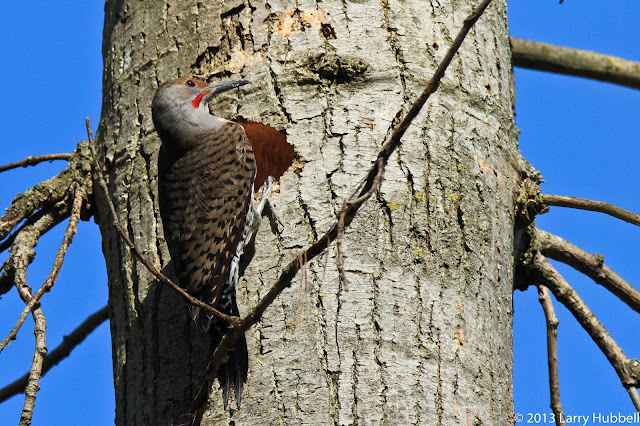 (This photo of the flicker at the new site was taken the next day when the sun came out.)

Apparently the show of force with the wood ducks was more about protecting the nesting tree than the particular site. After the wood ducks left the flicker returned to his new construction efforts. However there was another distraction headed his way. 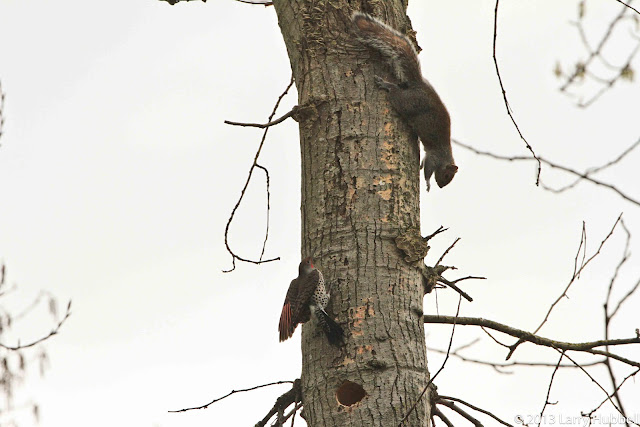 A squirrel leaped to the snag and headed down the tree. It startled the flicker and caused him to once again take up a defensive posture. 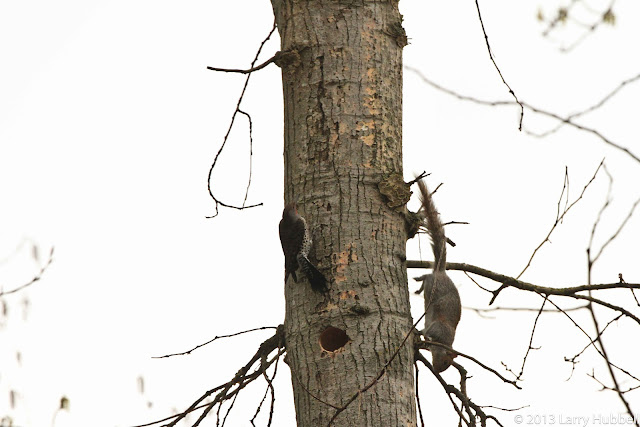 Even though the squirrel is larger it stays to the opposite side of the tree and proceeds past without causing any real problems.

The flicker diligently returns to his construction efforts. The cavity has became large enough that he actually climbs inside to continue his work. 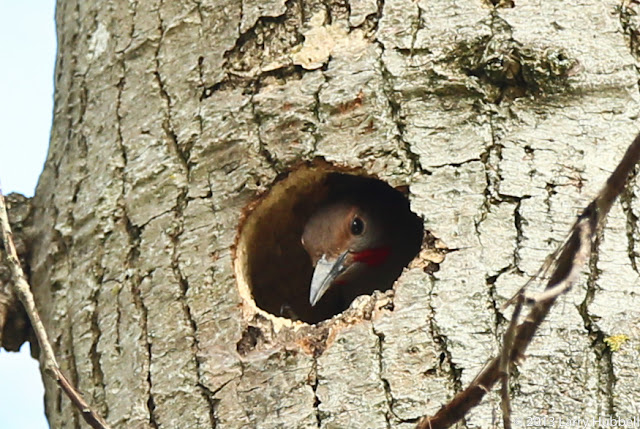 The next day he is back at work again. This time his construction effort is interrupted by a helicopter flying over. He warily tracks the flying metal beast until it passes. 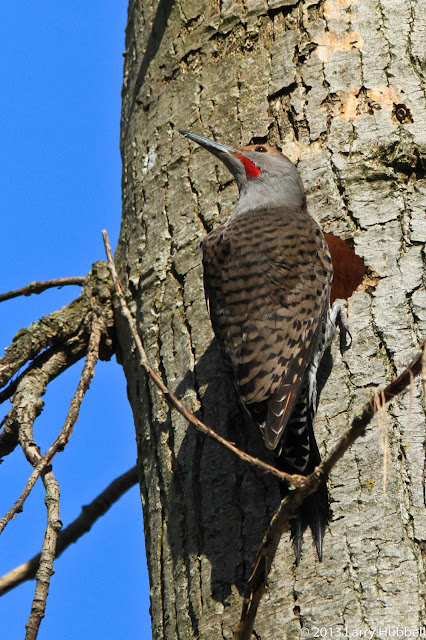 After all his hard work he takes a break and stretches some of his weary muscles. The orange coloring on the flicker is not exposed very often or very long. It seems a bit like a reward for the persistent observer. This next confusing stretch seems a bit like the Green Heron Yoga poses from last year. 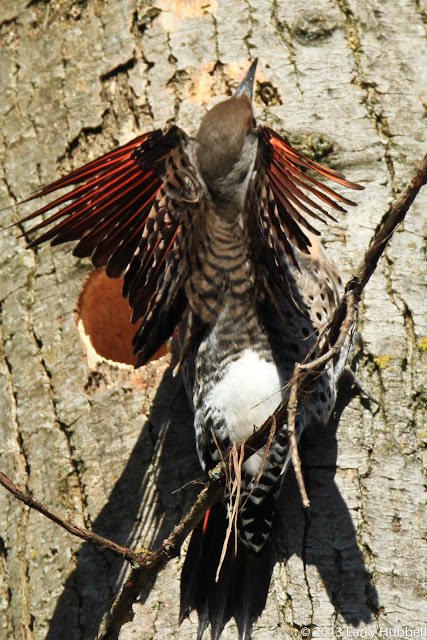 At this point no female had been seen in the area even though the nest appeared nearly complete. Was this just a matter of poor timing of the observations or does the male flicker construct the nest on faith believing...if he builds it she will come. Regardless of which explanation is correct something worked.


This week a female flicker has clearly become a partner in the "tree house" construction effort. The partnership appears to be in the form of a tag team. Only one bird works on the nest at a time. The moment the male lands on the tree near the nest the female shoots out of the nest like an arrow. Apparently she has worked up an appetite and is off to find food. 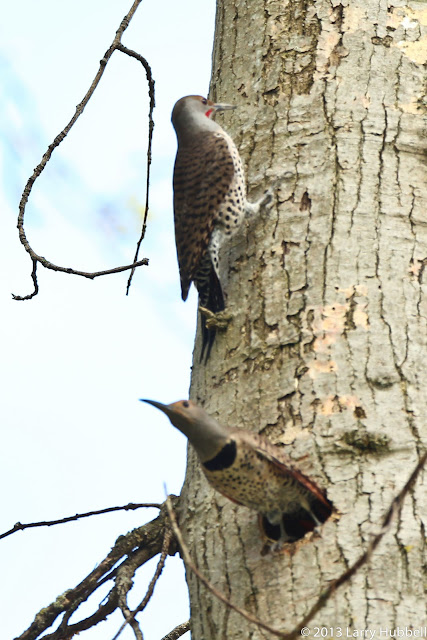 While working the flickers now climb inside the tree and remove wood to enlarge the nest. The chips apparently accumulate in a pile at the bottom of the cavity. 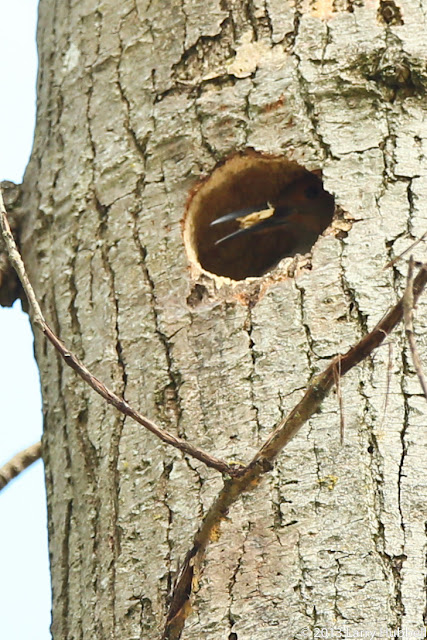 Sometimes they stick their heads out and drop the chips. 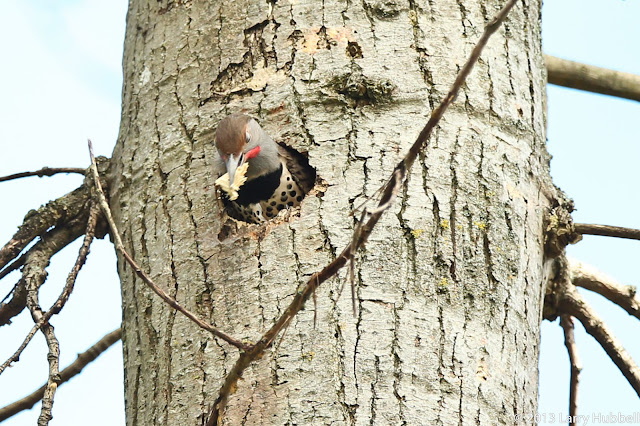 Sometimes they hang outside and reach back inside the nest. In this case they grab a beak full of chips and flick them over their shoulder. Maybe this is why they are called "Flickers". 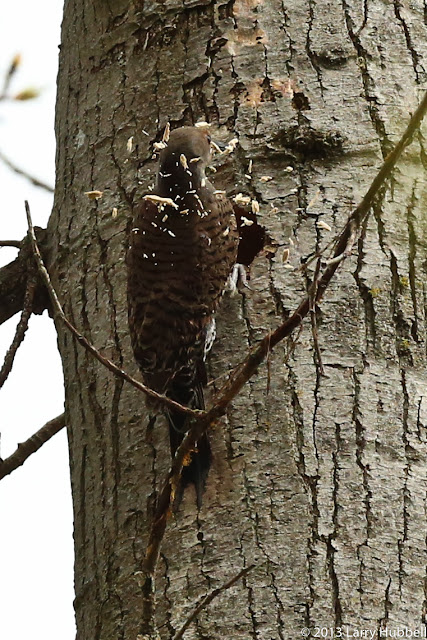 The widely scattered chips below the tree were the first clue to this construction effort.

Have you figured out how to tell the male flicker from the female? Here are similar photos of each bird.
A) 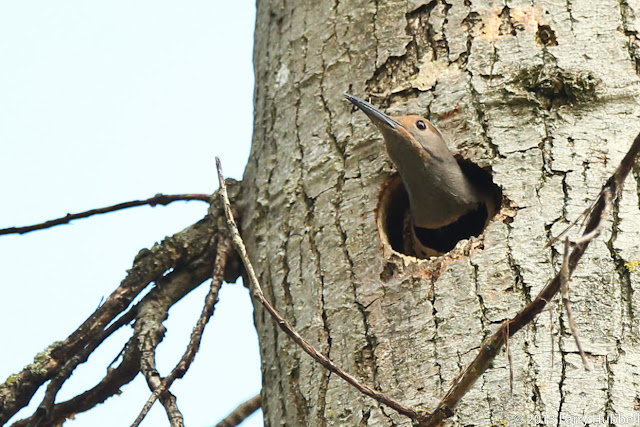 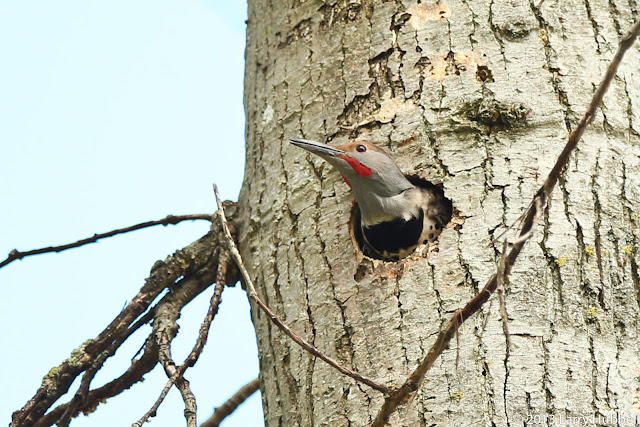 The Cornell Lab points out there are two different types of Northern Flickers. Our local birds appear to be the "red-shafted" version as opposed to the "yellow-shafted". To see the difference look at the photos at the bottom of this page.

By the way if you hear a woodpecker drumming on your metal chimney vent in this area it is likely to be a flicker. They apparently do this to demonstrate their strength as mates or define the area that belongs to them, so louder is evidently better. This can be annoying, especially when you think the chimney belongs to you.

By the way here is a short video of a different male flicker. He is a bit behind in the process of creating a nest but none-the-less he is very proud of his efforts.

(This video was taken from a kayak, so please excuse the motion)

Since wood ducks cannot create their own nests they are forced to use nests created by other creatures. Around Union Bay the most productive natural cavity makers are flickers. Pileated woodpeckers can make cavities faster but there are far fewer PWs so they make less cavities in this area.

By the way here is one of my last shots of Elvis the pileated woodpecker. 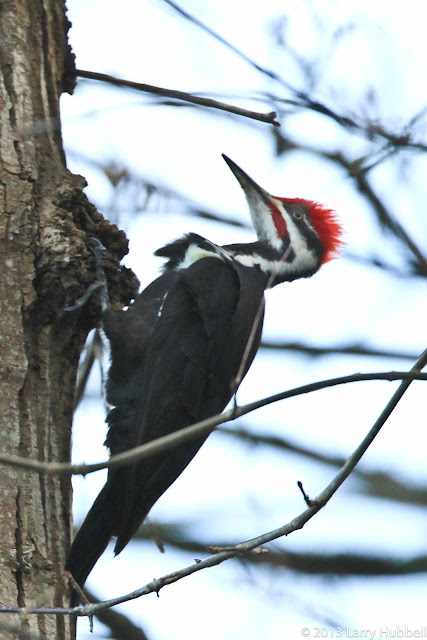 (This photo was taken on March 3rd. If you have seen him since that time please leave a comment below.)

Another cavity maker around Union Bay is humans. Someone has made a half dozen or more nesting boxes around Union Bay. I have not seen them in use but Ted Burris says that the wood ducks are likely to enter and leave the nests only after dark. Ted is doing some very interesting wood duck research. You can learn more at:

Ann's comment below reminded me that I had taken this video of a couple of male flickers doing their head-bobbing dance. It is short but if you need a laugh it's worth the effort.