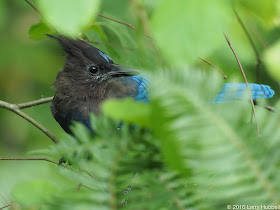 Steller's Jays seem to have split personalities. On one hand, they can be very shy and quiet. Often, when I glance at one, even from a great distance, they will move behind a trunk or hop up into the canopy. Sometimes, they will immediately fly away. On the other hand, they can occasionally be very loud, raucous and unintimidated by my presence. My friend Dan Reiff says when they are being extremely shy it is usually a sign that they are nesting nearby. 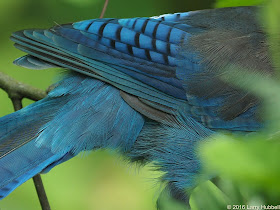 They are also strikingly beautiful. I find the subtly shifting shades of blue, gray and black irresistible. Also, the variety of textures and details in their feathers can be mesmerizing 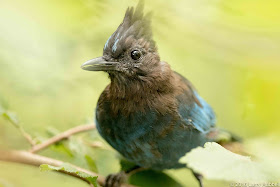 During the early portion of their first year they are a bit less flashy. Some of their feathers tend to have a dishwater-brown cast. Of course, these will ultimately be replaced with beautiful black feathers. 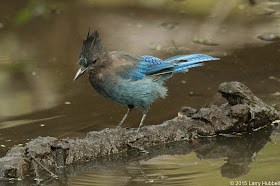 In the meantime, the rapidly molting brown feathers do not stop the jays from worrying about their appearance or cleanliness. 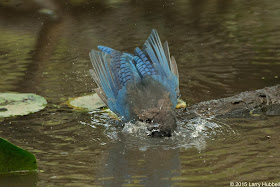 Even at a young age they enjoy bathing. 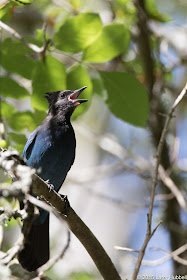 By September when this photo was taken, the brown feathers have all been replaced. The reddish-pink color inside the mouth is one of the last clues left to the age of this first year bird. Also, its crest will most likely be a bit longer when it fully matures. 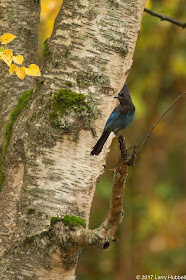 If I understand correctly, in mature birds an erect crest generally indicates elevated anxiety or some sort of arousal. 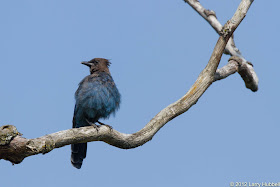 Logically, a lowered crest must imply peacefulness or calm. 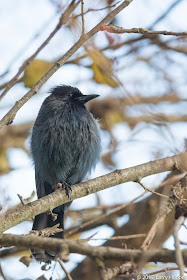 Last week, I spotted this bird sitting beside Duck Bay. For the longest time it simply sat in the sun directly in front of me. 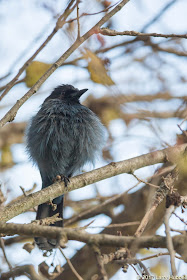 When it did the super-fluff feather expansion, I realized it was completely unconcerned with me or my daughter's dog, Ginger. I must admit that due to Ginger's personality, and many years of birding experience, she is exceptionally quiet, especially when compared with the average dog. 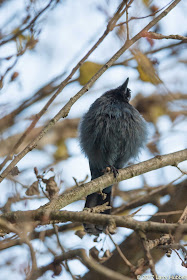 The jay continued to ignore us while it carefully evaluated a potential overhead threat. 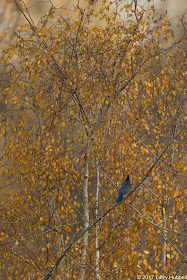 In the end, it finally roused itself and flew over to Nest Egg Island. Note: This is the same bird that was in the previous three photos. I find the difference in its appearance surprising.

I have not yet encountered the photo opportunity of my fantasies - as related to Steller's Jays. However, this photo is a step in the right direction. I dream of bright yellow leaves in the background and a brilliantly blue bird perfectly focused in the foreground. 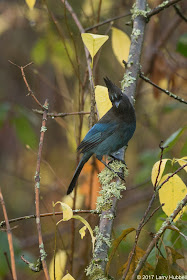 This photo would be much closer to the dream if the Indian Plum had retained its full compliment of yellow leaves.

Steller's Jays are quite intelligent. The quizzical way this bird cocked its head certainly implies thoughtfulness to me. I suspect, that just like humans, a bird in thought is often considering its next meal. 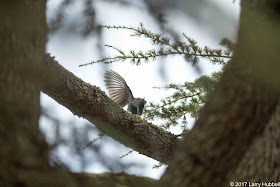 Earlier in the fall I noticed Steller's Jays eating the nuts of a California Laurel, just south of the Sorbus collection in the Arboretum. This jay carried its nut to a nearby coniferous tree with large branches, where it could easily hold the nut while hacking it open. The wing is evidently being used for balance. 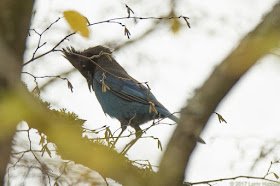 A week or two ago, I saw the same type of process happening near Duck Bay, at the north end of the Arboretum. This bird is preparing to strike a nut with the full focused force of its beak. 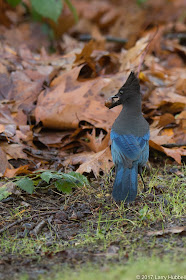 On Monday, immediately after a gardner uncovered the lawn on Foster Island with a leaf-blower, I watched the jays come in and collect newly revealed acorns. 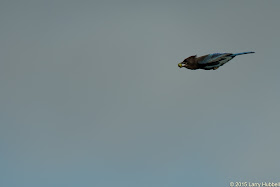 Over the years, I have repeatedly watched Steller's Jays carry their Foster Island acorns west to Nest Egg Island. (You can see the exact location by Clicking Here and visiting my personalized map of Union Bay.) I must admit I have been a bit confused about what the jays were doing. 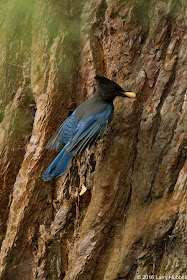 Previously, I have watched jays caching nuts in crevices on large trees in the Arboretum. However, there are no large trees on Nest Egg Island.

Last month, while kayaking with Marcus Roening, my original birding mentor, I asked him about the situation. Immediately, he asked if I had ever seen any squirrels on Nest Egg Island. I replied, 'None, that I can remember.' Marcus concluded that the jays were caching the nuts on the island to keep them away from the squirrels. 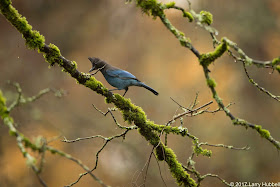 The missing piece to the puzzle for me was the realization that jays will cache nuts in the ground, as well as in trees.

It seems very likely to me that sooner or later a jay will forget where it hid one or more nuts on Nest Egg Island. I expect that someday, the little Island may be covered with oak trees. It will be interesting to watch and see when or if this actually happens. 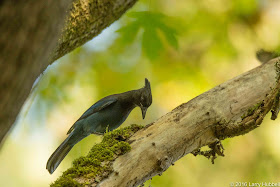 In the mean time, whenever I see a Steller's Jay on a branch I wonder, What is it doing? It may be inspecting the branch for small creatures to eat, retreiving a previously cached nut, hiding a nut for future consumption, or holding a nut that it's preparing to open and eat. In the Spring, it might be inspecting for a potential nest site, looking for the nest of a smaller bird to raid or simply preparing to sit in the sun and enjoy the weather. I am sure there are many other possibilities, which I have not even considered.

Who would have guessed that the life of a relatively small and beautiful corvid could be so complex.

Without a well-funded Environmental Protection Agency, it falls to each of us to be ever more vigilant in protecting our local environments. Native plants and trees encourage the largest diversity of lifeforms because of their long intertwined history with local, native creatures. I have been told that even the microbes in the soil are native to each local landscape. My hope is that we can inspire ourselves, our neighbors and local businesses to plant native flora and to support native wildlife at every opportunity. My intention is to include at least one photo each week and visually challenge us to know the difference between native and non-native lifeforms. Can you identify these plants?  Are they native to Union Bay? 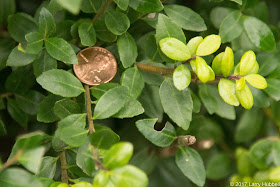 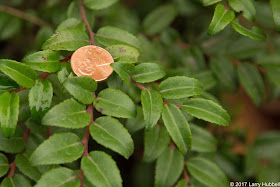 Plant B is our native evergreen huckleberry. The photo below is an example showing a partially developed berry. 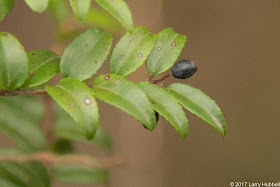 Plant A on the other hand is not the same plant. Until a few years ago I mistakenly assumed that it was. When we were replanting our yard our landscape architect informed me that Plant A was from Asia (Japan if a remember correctly).

At the time, I thought the leaves and berries looked very similar and even the taste of the berries seemed essentially the same to me. Our architect correctly informed me that I needed to be much more careful about eating berries, especially from plants that I had not correctly identified.

The most obvious difference to my eye is the color of the stems or small branches. Our local evergreen huckleberry stems are a reddish-brown color while the stems of the introduced plant are more of a greenish-brown. Now, comparing them side-by-side, I also think the native leaves appear slightly longer and a bit more pointed.

I have been unable to locate the correct name for the introduced plant. Feel free to leave a comment below if you know the plant's name. Thank you!

Regarding my unknown plant, David Zuckerman, Manager of Horticulture for the UW Botanic Gardens, identified it as 'ilex crenata'. He informed me that the berries are toxic. Evidently, I should just be glad to still be kicking. With David's guidance I found the following pdf regarding the plant. Thank you, David!